After a truly magic two night stay at Rapid Bay, we had one last swim, packed up the camper and headed north towards Aldinga. The coastline on the way is stunning, and not long after we pulled into a Hipcamp property and set up known as Blissful Peace. It was stinking hot, and we decided to head to the nearest beach, completely oblivious to what we were about to see.

Alistair, our Hipcamp host had said to me that after 10AM you’ll struggle to get a spot at the beach, and I didn’t fully process his comment until we came over the top of a crest, and saw Aldinga Beach. Honestly, I have never seen so many cars on a beach in my life, ever. We’ve done Broome in school holidays when its busy, and this made Broome look empty. 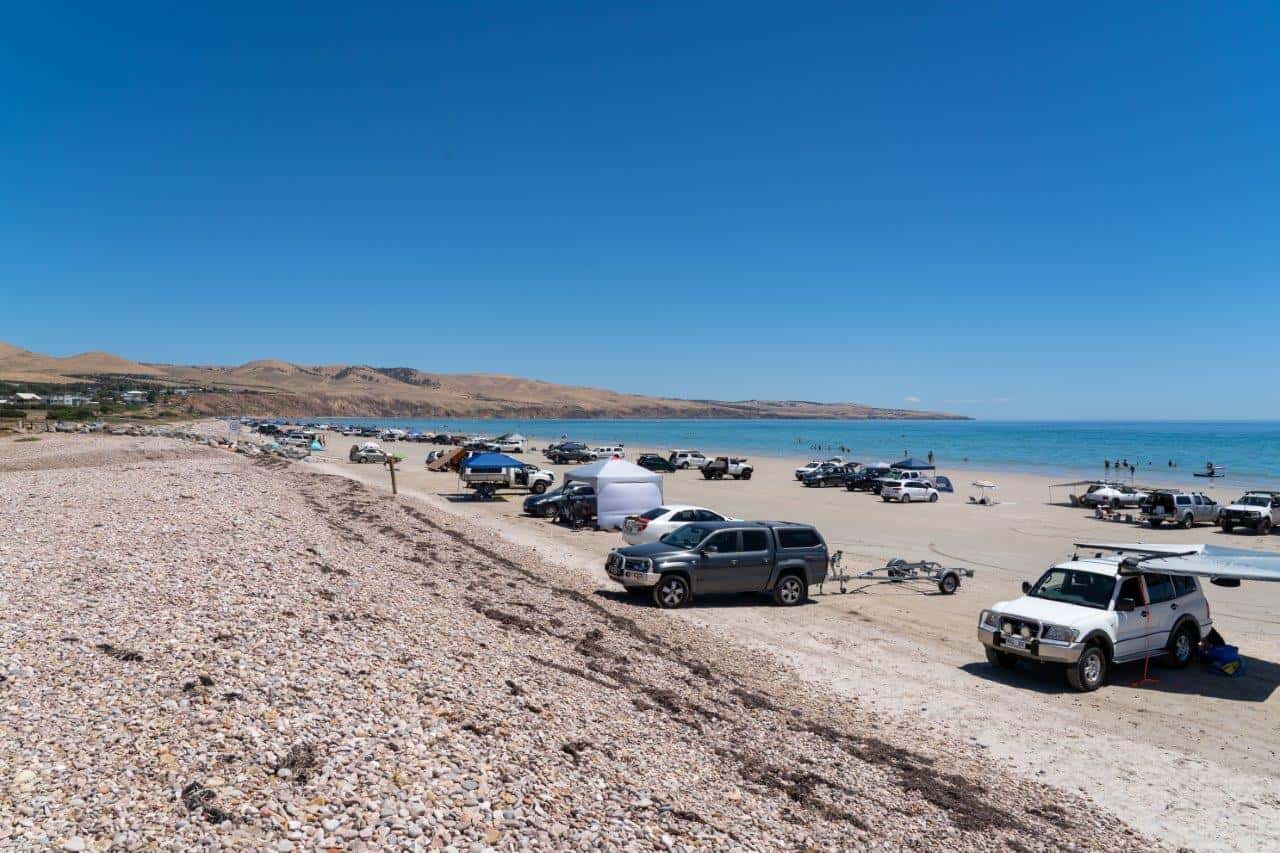 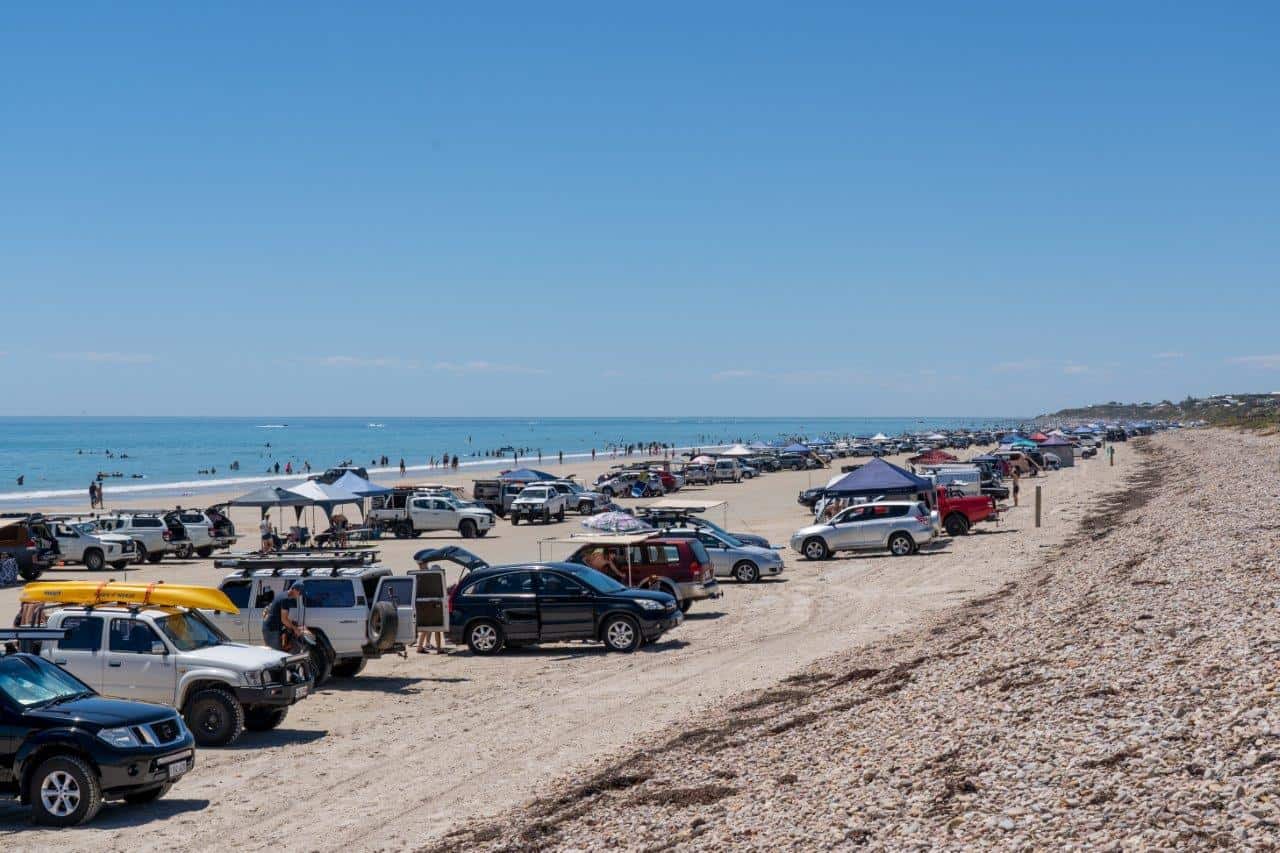 Looking North up Aldinga Beach was even worse

I actually stopped on a gravel patch above the beach to take a photo, as I was so shocked at the number of people and cars on the beach. To start with, there were 3 rows of vehicles as far as the eye could see, all set up next to each other.

Further down (like more than a kilometre down) it narrowed to two vehicles in a row, but there were very limited gaps, with a huge number of jet skis out enjoying themselves, and every possibly make and model of vehicle you could imagine. We’re talking Porsches, 4WD’s, Camry’s, VW Combi vans and everything else.

I made a point of stopping at a lookout later on to get a better shot of how many cars there really are: 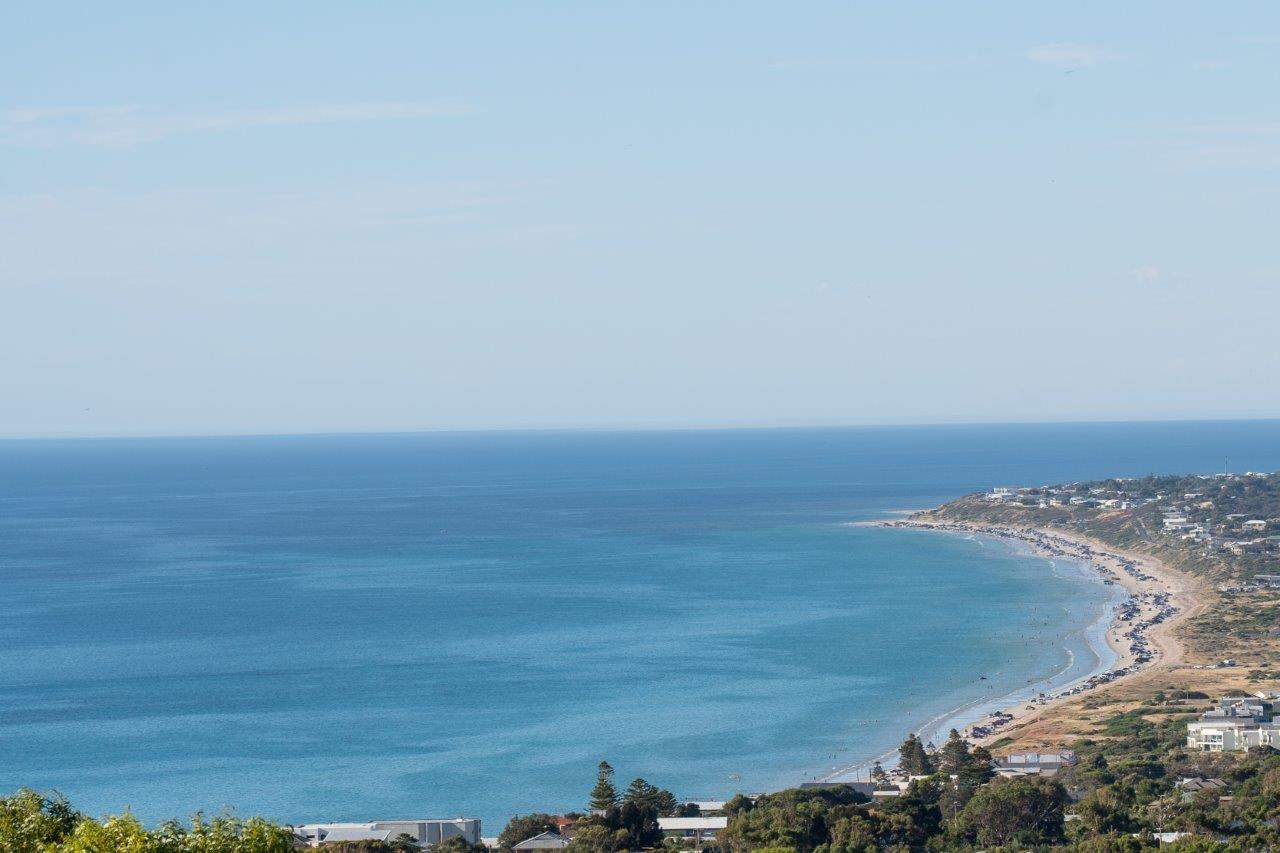 There must have been thousands of cars

If I wasn’t already shocked at the sheer number of people and activity going on, I was left speechless when we rolled up to the entrance and saw a sign saying $8. ‘I think they’re charging to get onto the beach’ I said to Sarah, and she looks equally as puzzled as I do.

We’ve never paid to drive onto a beach in our lives, and I’ve never heard of it either. We pull up out of the way, and have a chat to my folks, who are both as astounded as we were. We agree that with the amazing weather, its not worth driving half an hour to another beach that could be just as busy, and decide to pay the $8 and mingle with the crowds.

As it turns out, the money is split, so 50% goes to the local club doing the collections, and the other $50 goes to the council. I’d estimate there were maybe 1000 – 3000 vehicles on the beach, so you’re starting to talk some serious money collected.

It appears these are not there all the time (and they were gone when we left at 7PM), but its a new thing for us, and I was actually wondering whether they are even legally allowed to charge, given everything under the high tide mark is not council owned. I guess the access to the beach is though, and that’s how they get away with it.

For $8 we weren’t going to complain, and we had a magic afternoon and evening, but it was awfully interesting to see! 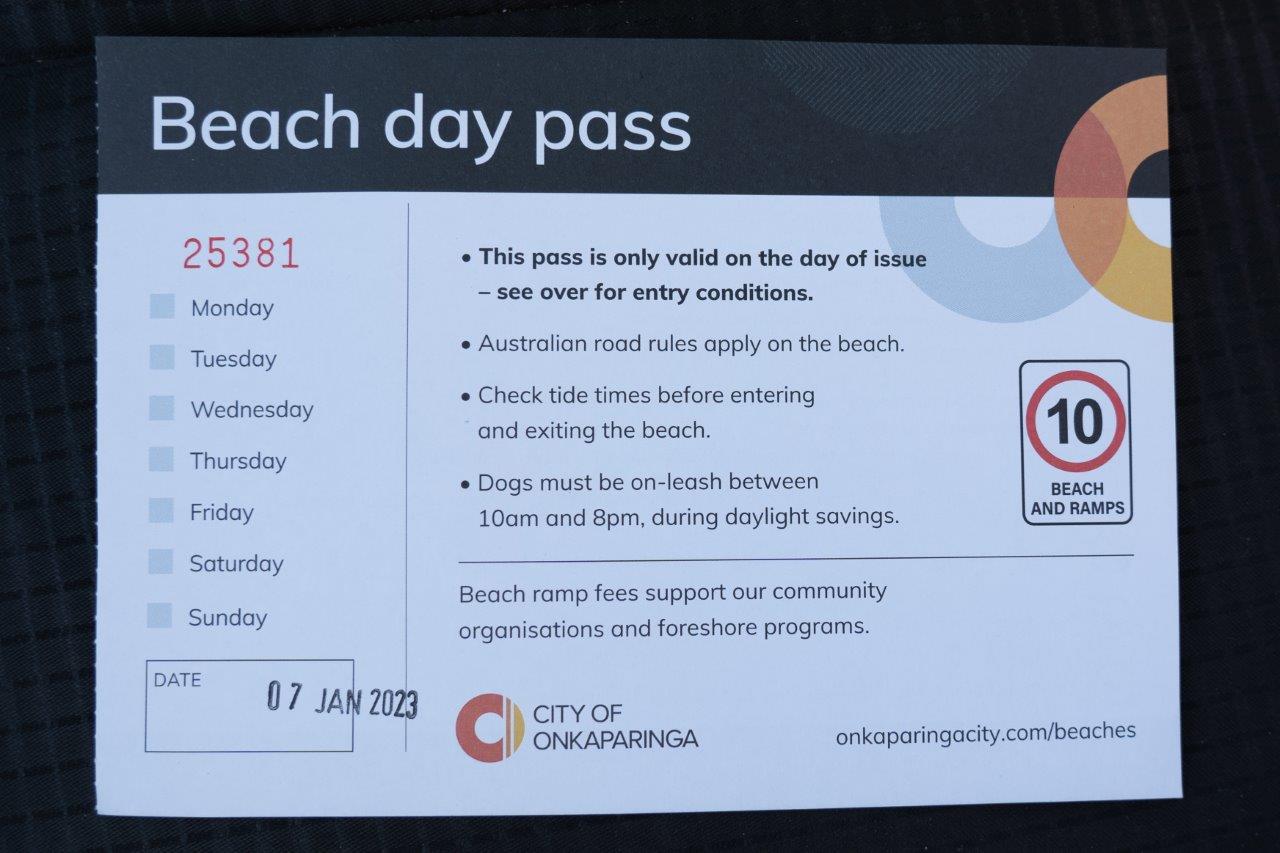 The beach pass that you get given 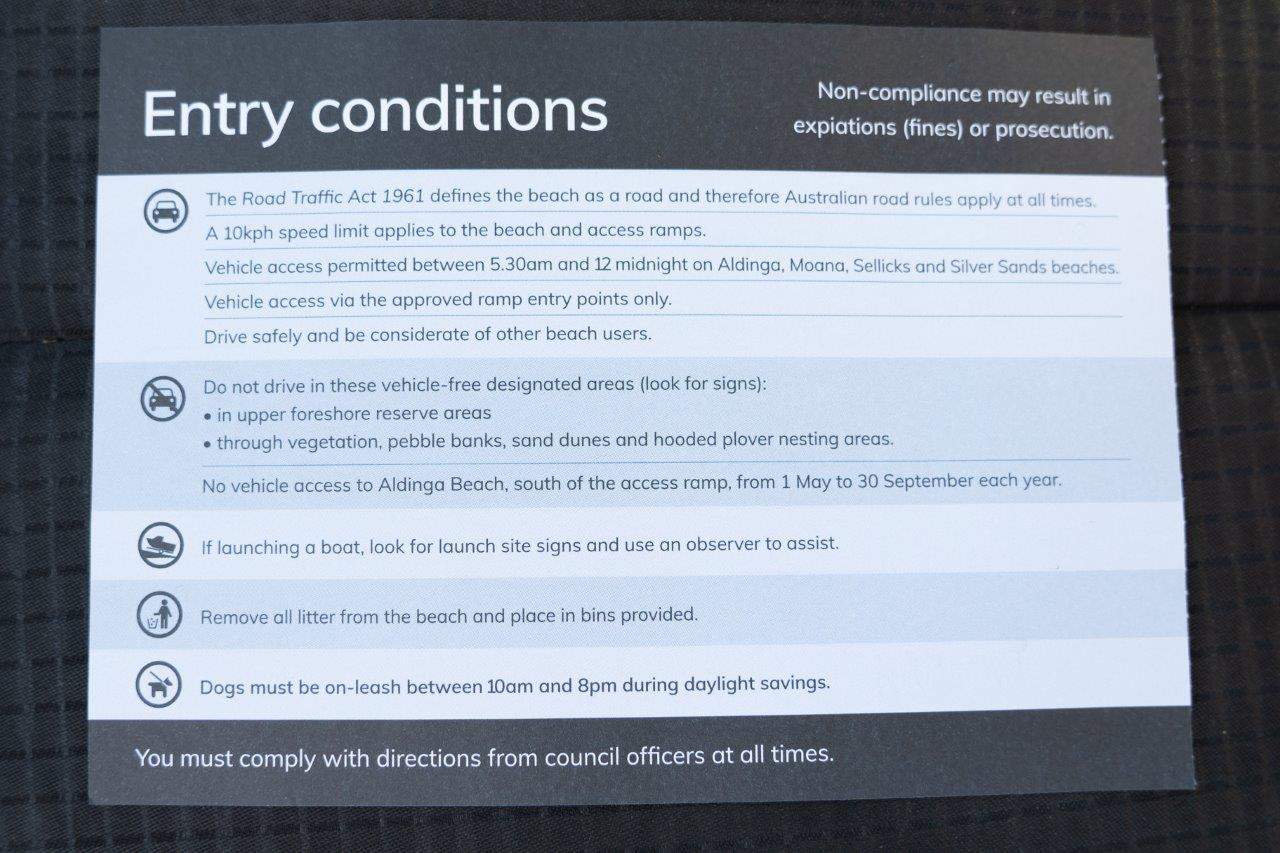 The entry conditions for Aldinga Beach

You can enter onto the beaches in a number of places (Aldinga, Silver Sands etc) and the pass that you get allows you to exit one, and drive onto another without any issues. We entered at Silver Sands, thinking it would be quieter being the smaller beach, and drove about half way down before we spotted a bloke who was just finished packing up, and was leaving.

The space was just wide enough for our two vehicles, and we had front row seats to the beach, so we set up the awnings and kicked back 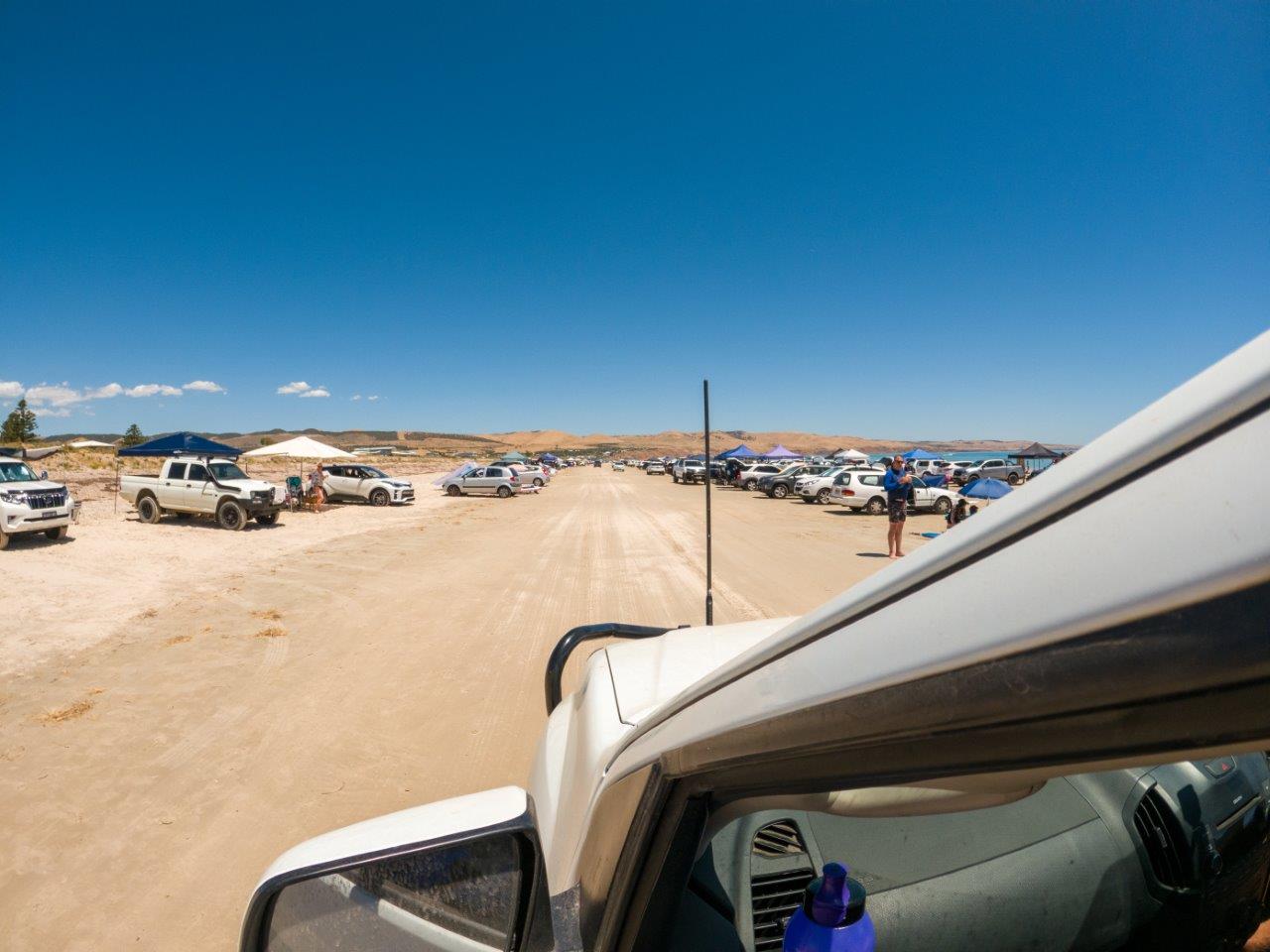 Trying to find a spot for two vehicles was almost impossible

We’d not looked too closely too the tide, but once it started rising and making its way towards our wheels we noticed, and had to move the vehicles back. We shuffled back once, and the second time moved them back onto the completely dry sand to be off the road, and not have to worry about it again. 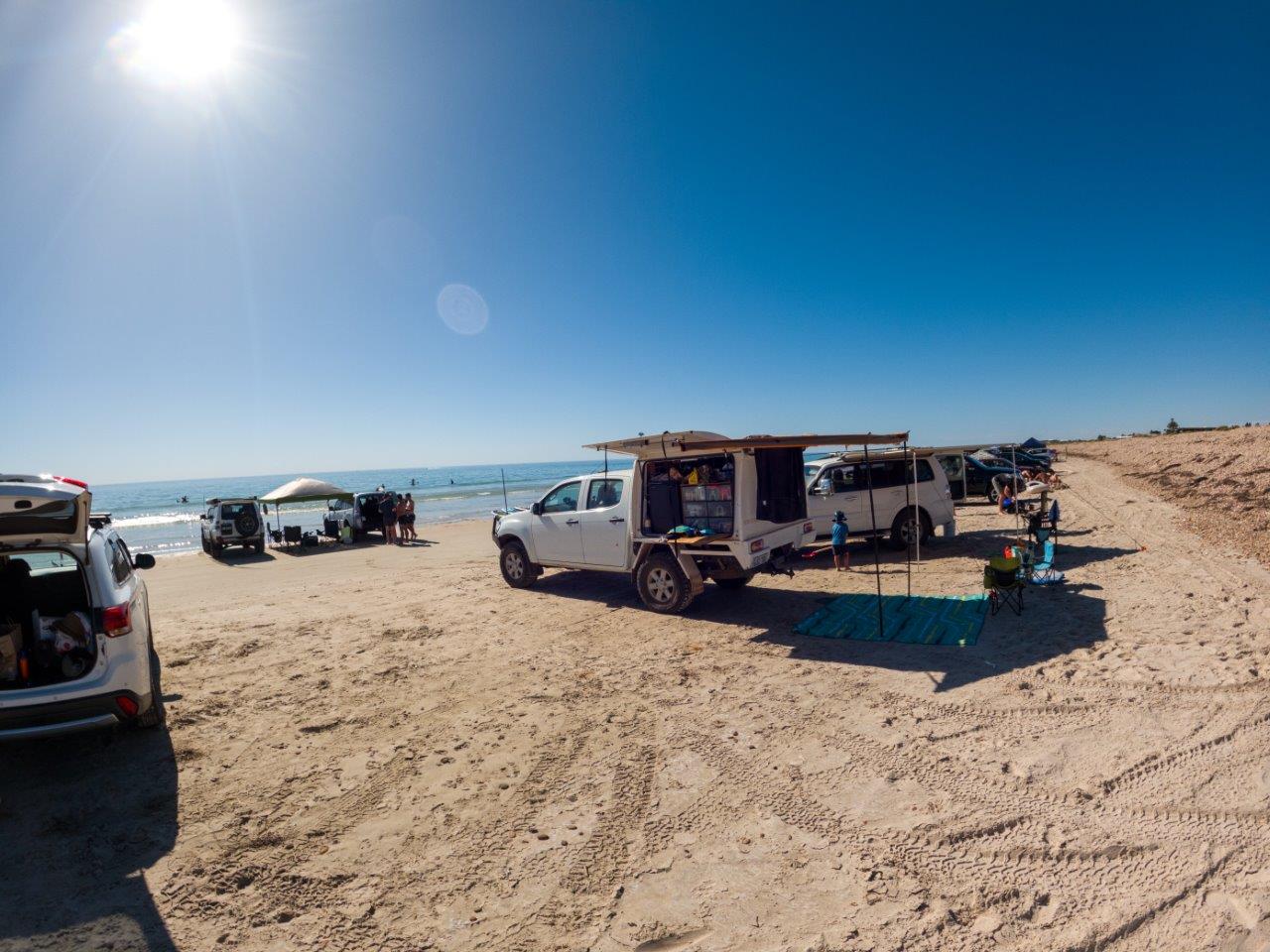 If you park too close to the water you’ll have to move back, like we did

We had unreal weather

I’m not sure how often weather like this comes along, but it was 35 degrees (and still about 32 degrees at 6:30PM), and not a breath of wind around. The water was glassy, went out nice and slowly and was the ultimate place to float around, and help the kids learn to body board the small waves in.

We had an amazing afternoon, and had arranged to bring food down and warm it up in the induction cooktop from our DIY lithium battery. 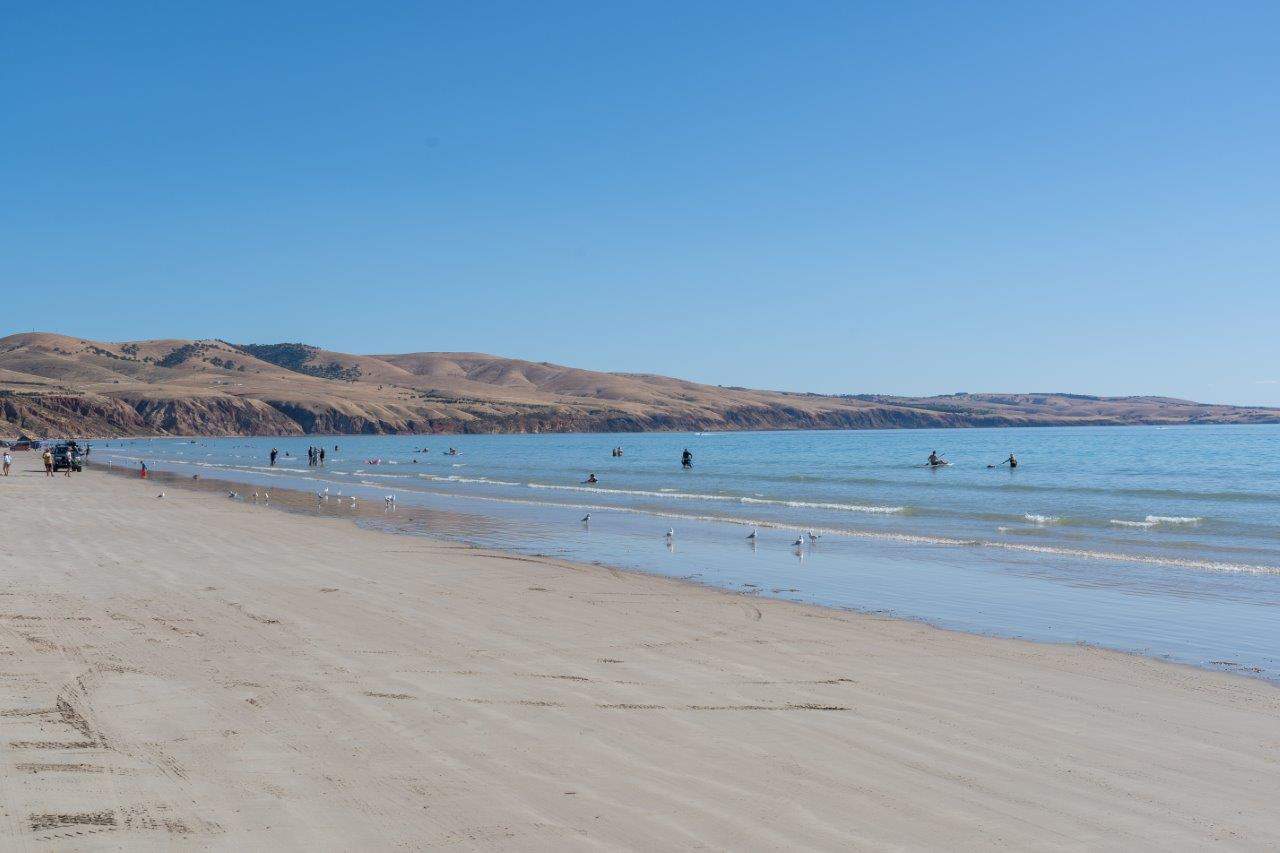 We had truly perfect weather 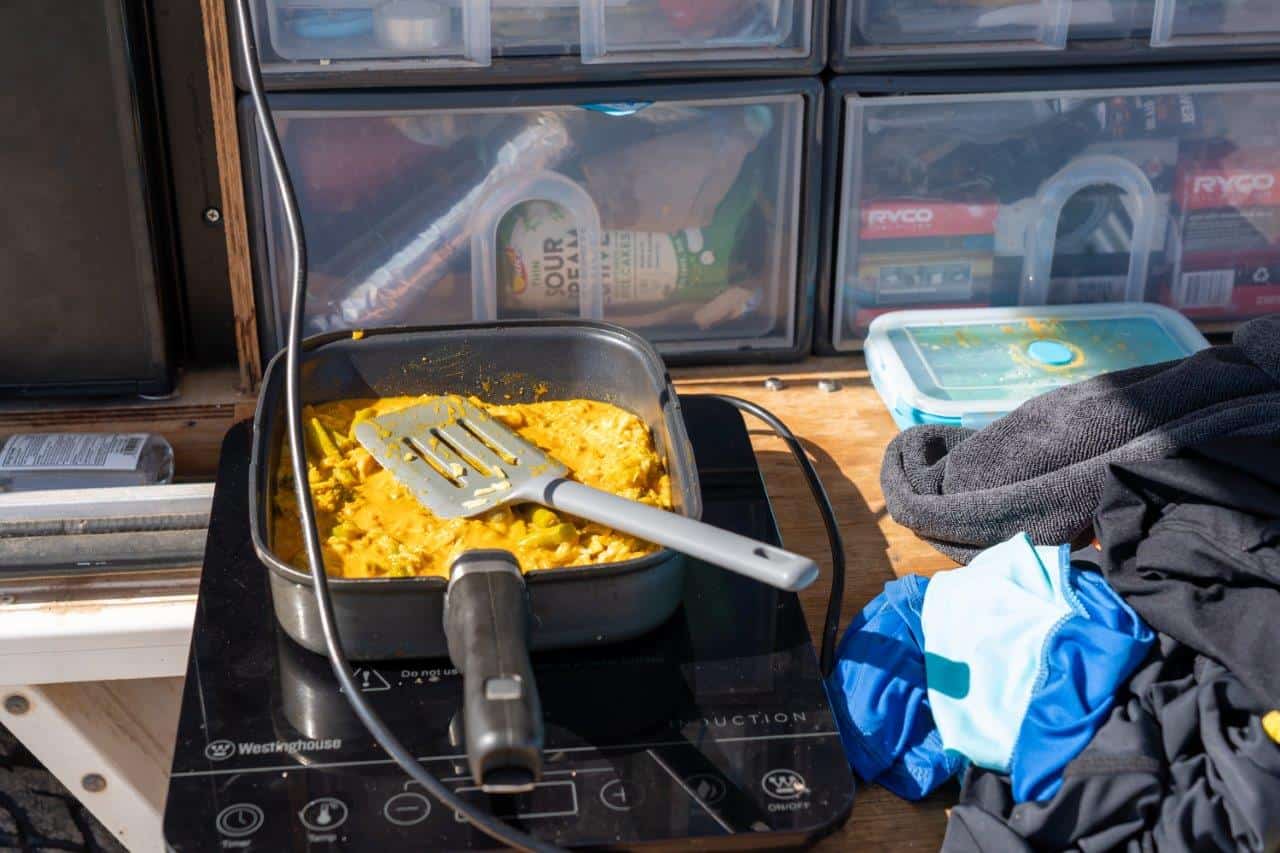 It was a bit of fun

Normally we’d do our best to find a beach that had no one else on it, and going from that to Aldinga Beach was quite a shock, but we took it in our strides and thoroughly enjoyed it. People were all out having an amazing time, and we love to see that. 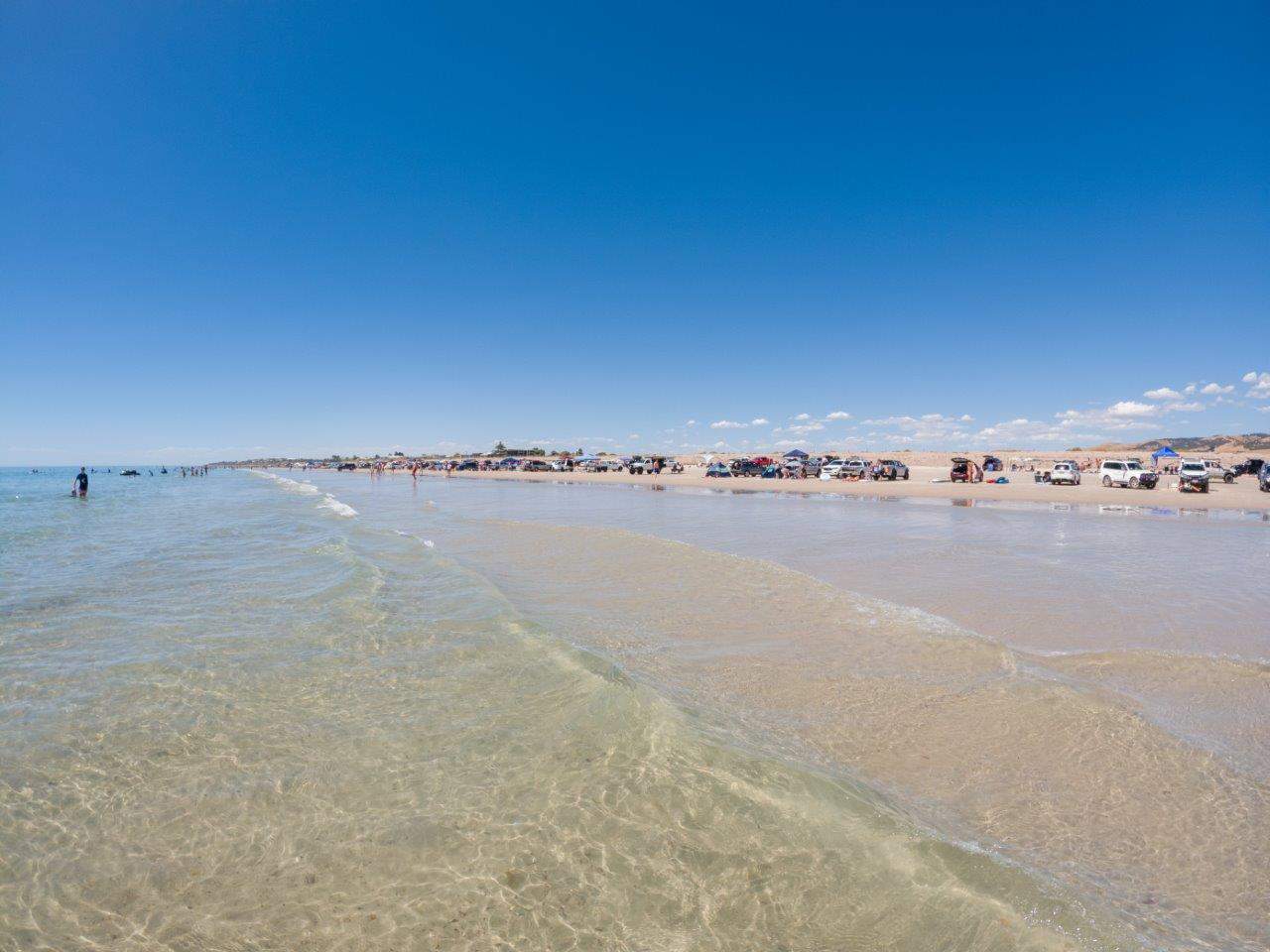 Everyone was having a ball, which was great to see

We didn’t see a single person doing anything stupid, or that they shouldn’t have been doing (although a few people drove their 4WD’s into the water to retrieve jet ski’s, which is no good for them), which was awesome. I guess being so close to Adelaide, and such a great day it was hugely popular and very packed. 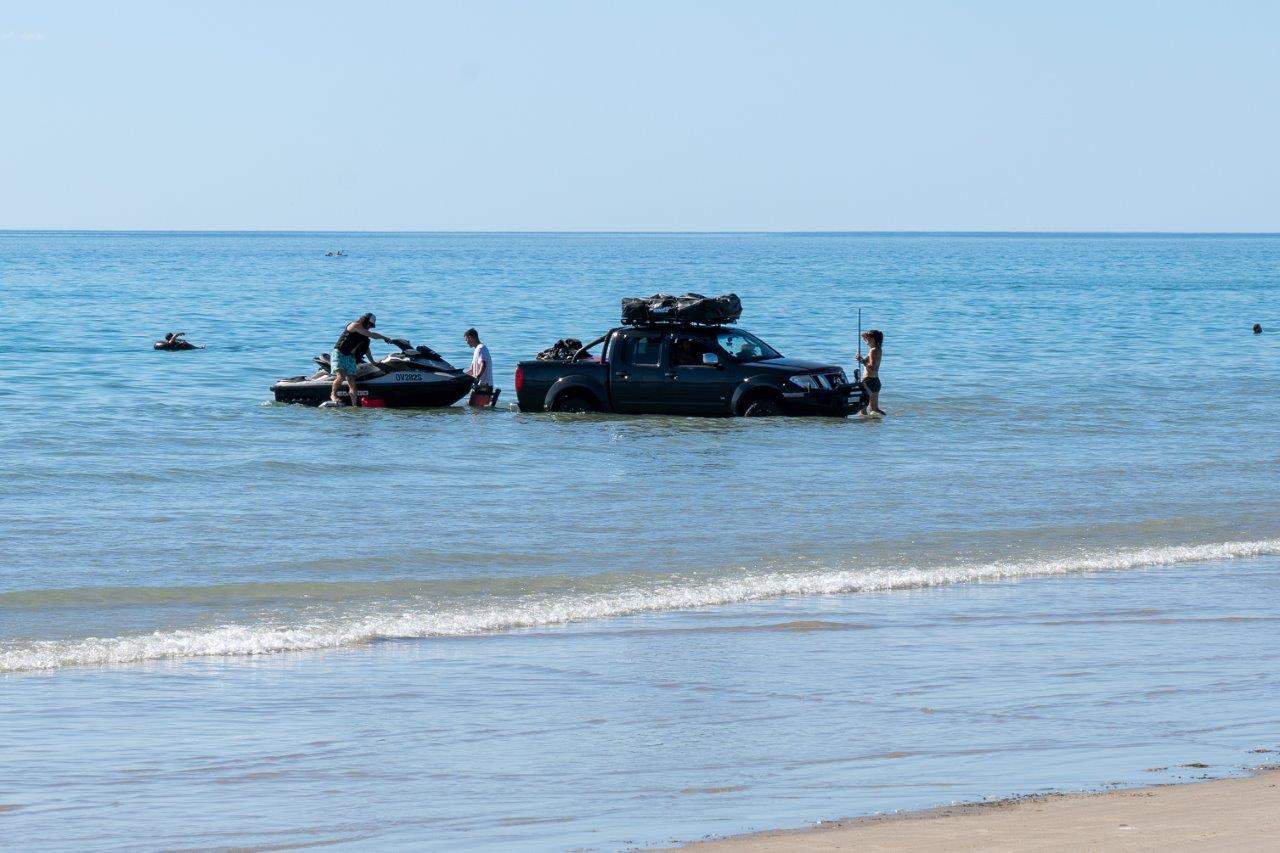 We saw a lot of people driving their vehicles in like this to retrieve boats and jet ski’s; something we’d never, ever do

We drove back to our camp ground, 7 minutes away by car not long after dinner, and put the kids to bed, all happy that we’d had a great day. It went downhill from there though, with a big upset from our eldest son, but that’s a story for another day. 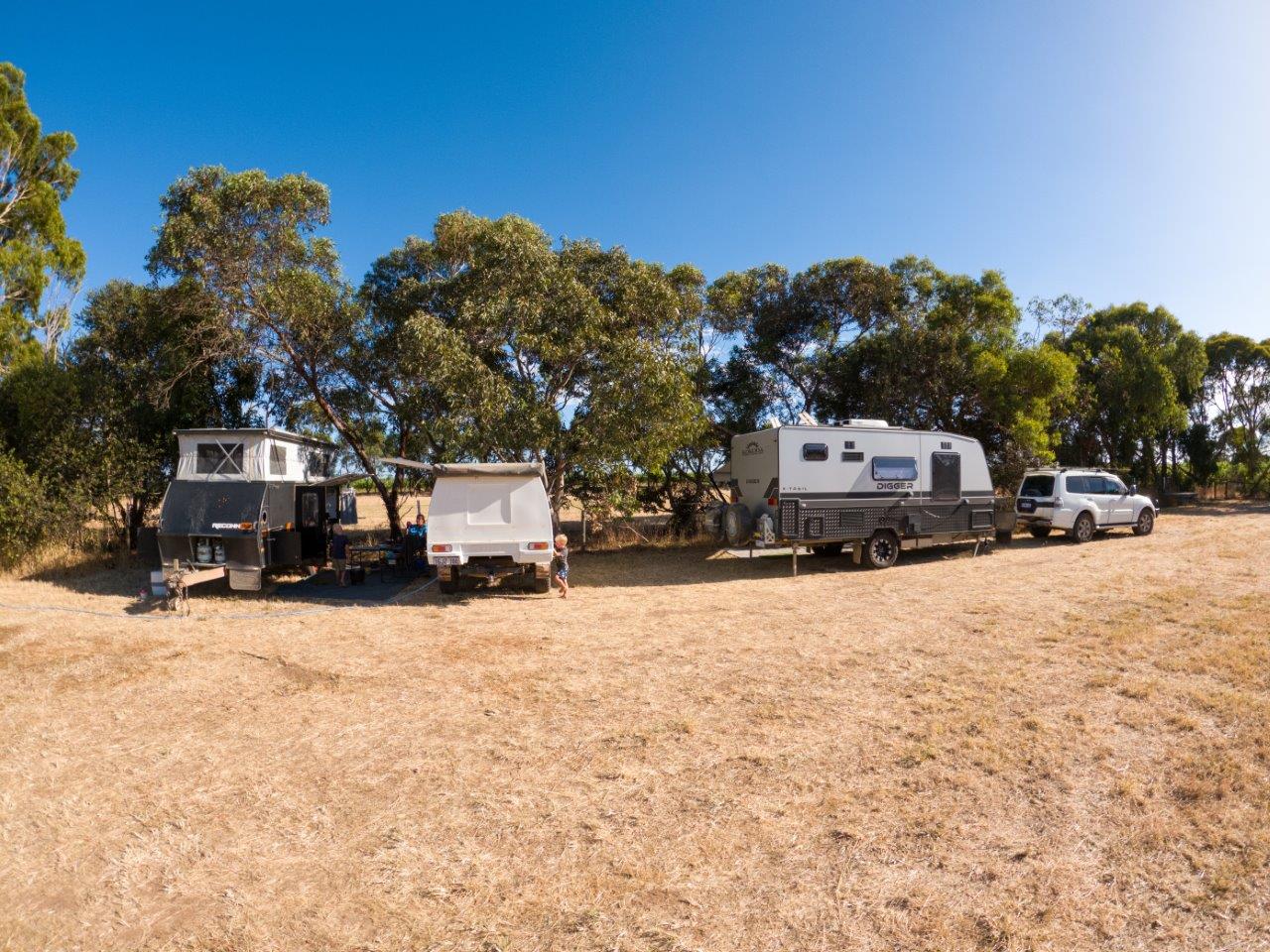 We returned to our camp site after dinner, just 7 minutes away