If you are looking for one of WA’s ultimate tourist destination, it’s Broome! You’ll find it located about 2200km north of Perth, in Western Australia. Broome is known throughout the world as one of the most enjoyable tourist destinations, boasting of over 22km of pristine white beach (and that’s just one beach) as well as brilliant weather year round and plenty of things to keep the tourists occupied (of which there are many during peak season!).

Broome has been a pearling town for many years, and some very impressive pearls come from here. In fact, I have held pearls on a pearl tour which retail for over $15,000 Australian dollars, to put a number figure on it. If you want to get a taste of what it is like to Travel Western Australia, then Broome is a brilliant start. 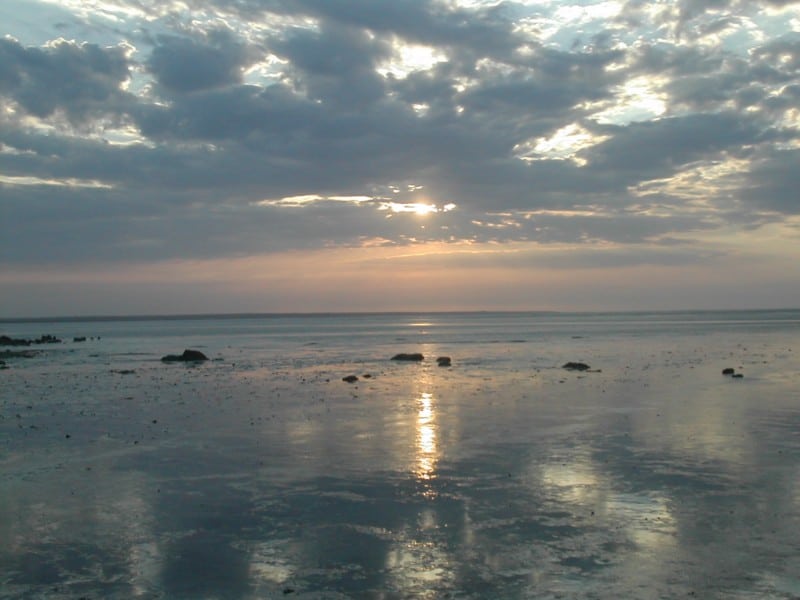 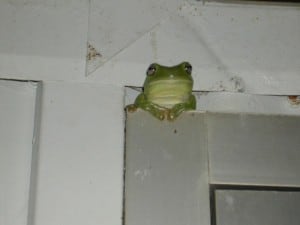 A green frog enjoying the weather

Broome has a climate which makes me very jealous here in Perth! The weather in Broome is literally the opposite of the weather in Perth. In Perth, it is cold and/or wet from May to October and warm and dry from November to April. Like Perth, Broome has two different seasons; wet and dry.

The wet season runs from November to April, and the dry season runs from May to October. Many people who live in Western Australia will often head north when it gets cold in the southern areas and then back down south when spring hits again (if they have the time and money to do so!).

Most years May is the more popular time to visit Broome. Usually at this time the southern part of Australia gets quite cold, but Broome stays at mild temperatures during the day, and then cools down a little at night. You can expect temperatures which range from mid 20’s to low 30’s, and very low humidity. At this time of the year the skies are blue and without a cloud in sight.

Also, rain is very unlikely at this time, meaning it is great for any outdoor activities that you want to do. The temperatures at night can be quite cool, averaging around the 12 degree mark, so make sure you have some warm clothes with you!

When I travelled to Broome it was later in the year, in the Wet Season. This is a time where there are much less tourists around and the weather changes incredibly. The days are often hot and the nights are perfect temperature.

I still have memories of walking around in shorts and a singlet at 10:00 at night! It rains mainly in the afternoons or night, and when it rains, it pours! Rain showers happen very quickly and are usually over within 30 minutes.

It doesn’t rain every day, which makes it great to enjoy. I found that because the temperature was so warm even when it rained you could walk around, get soaked and still stay warm enough. During this season there are some amazing lightning storms and sunsets. For those who love bird watching, the Wet Season is the best time to visit. Temperatures range from mid 30’s during the day and mid 20’s at night.

Another of Broome’s amazing beaches

How can you get there?

The most common way to get to Broome these days is to catch a plane. It’s cheap, fast and far more comfortable than sitting in a car for 24 hours. Of course, there are cruises which leave from Perth and end in Broome, or stop at Broome, so these are an option if that’s what you want to do.

If you drive to Broome, it’s usually advisable to stop somewhere for a break; unless you have multiple drivers and are very confident in your driving. I have friends who regularly drive from Perth to Broome in one go, with 2 drivers but they are local and are used to it. I would suggest it’s not the best idea – do it over 2 days.

If you do choose to fly up, chances are you will want a car. There are few car hire companies, located at or near the air port. There are a number of buses that go around Broome, but it’s always nice to have the freedom of your own car.

There is so much to see, and often the best places can only be found with a little bit of exploration. To do this you really need the freedom of your own car. Just enquire at the airport where you can hire your car from. You can get some old bombs for very cheap, or a nice car for a little bit more. 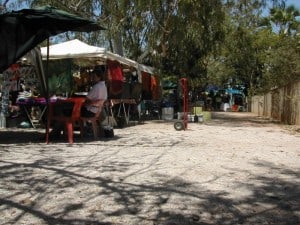 What are some of the things that you can do?

If I listed everything that you can do at Broome this post would be much longer than it normally is, so I will only list a few things! To start off with, check out Cable Beach, which is Broome’s main beach.

You can also take a look at the crocodile park, bird and reptile parks, the plane wreckages, go on a camel ride, fly in helicopter tours or take a tour in a hovercraft. Broome thrives on tourism, which is why there is so much to do. China town is a small town which is well worth a look, as well as the Pearling showroom and at least a few of the many beaches.

There is also a golf course and Museum, Art Gallery and a natural phenomenon that you can watch off town beach called the ‘Stairway to the moon’. Other tours include bird watching, four wheel driving, walking tours, scenic flights, mud crabbing, fishing charters, aboriginal culture and the list goes on. We stayed for over a week and a half and still had a heap of things we could have done if we had longer! 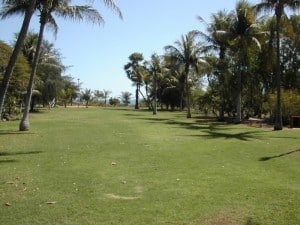 Where can you stay at in Broome?

You have a lot of choice when picking out accommodation in Broome. Often purchasing a deal which includes return flights, accommodation and even car hire is the cheapest way to have a great holiday, but you will always find promotional deals on the internet at different places and times of the year.

There are a large number of hotels and motels, backpacker accommodation, units, houses and apartments. Broome is spread out over a reasonable distance, so make sure you pick the place that you want to stay!

Cable Beach Resort is quite well known in Broome, and it gets used a lot. It is located right on Cable Beach, and right next to some very impressive restaurants and shops. There are some amazing rooms, as well as a pool and spas. If you are looking for a luxurious holiday, then Cable Beach Resort would have to be your number one stop.

Again, I can’t stress the importance of looking for promotional deals that happen regularly; you can get much cheaper flights and accommodation if you are patient and look around on the internet or in the paper.

We love to stay at Cable Beach Caravan Park; its fantastic. 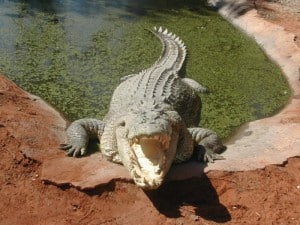 A huge crocodile being fed

Out of everything I did at Broome, I think the Crocodile Park was probably the most enjoyable. Being someone who loves nature, I was amazed. There are crocodiles that are over 4 meters long, and are simply incredible to watch.

Make sure you book a tour and go around the park when they are being fed, as you will see some great sights and be able to get some amazing photography. Most are in fenced off areas, and there are also kangaroo’s and other animals to see.

Personally I think that the beaches in Broome are one of the best that you can visit. I have been to many, many beaches, and Broome trumps them all. The sand is perfectly white, and they just stretch for mile, after mile, after mile. I love walking on the beaches at night, when the stars light up the sky. The water is still very warm, and you can chase the little crabs around along the beach. Walking on these beaches has to be the most relaxed environment you can enjoy. 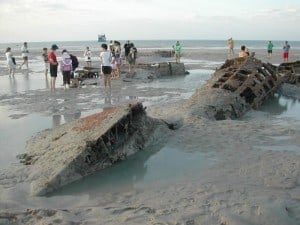 A very popular and cheap thing to do in Broome is to visit the Broome plane wreckages. There are quite a number of these, found off Town Beach. At low tide (usually at around 6 AM but depending on the month), you can walk out from the car park and along the flats.

There is often some impressive water life that you walk past, so keep an eye out. Usually there are quite a few people each morning that will go to the wrecks for a walk. The tides in Broome are amazing to see; they go up and down by up to 6 meters every day and sometimes several times. You can walk out and look around until the tide starts to come in, then make sure you walk back in quickly. It’s not like a tidal wave; just a slow increase in water height but you wouldn’t want to hang around for too long.

Alternatively, if you feel like the walk is too much, you can fly out in a helicopter, or take a hovercraft tour. These drive along the water and then onto the sand, and are quite amazing to watch. The cost to go on one is around 140 dollars for an adult, depending on what tour you choose to take. They are truly amazing machines and have very high ratings. 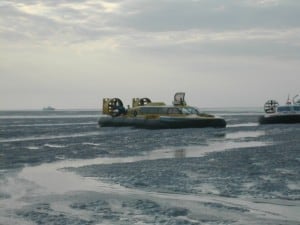 What tours are offered?

Another symbolic icon of Broome is the Camel Tour, which goes along cable beach sometimes several times a day. There are two companies which do the tours, and they are not actually that expensive. I think it’s worth doing just for the experience, and you get to see some impressive sunsets or sunrises if you go at the right time.

You can also go on a 4×4 tour and enjoy various parts of Broome or even drive into the Kimberley Gorges and Dampier Peninsula. As mentioned above you can go on a hovercraft tour, go mud crabbing, bird watching, fishing, scenic flights or anything else that might seem of interest.

I have to say the Pearl Tour was well worth my money; you get to see some of the equipment that was used many years ago, hold some very expensive pearls and learn a lot about the pearling industry. I found this very interesting, and thousands of people go through it each year. 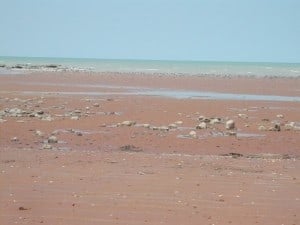 What should you take to Broome?

This really depends on what you plan on doing! Make sure you take the right clothes for the right season, and use a lot of sunscreen. It’s very easy to get sunburn in Broome if you aren’t careful. If you are even remotely interested in fishing, take some tackle because the fish you can catch up north simply eats Perth fishing a hundred times over.

Of course if you are just looking for a relaxing holiday, just throw in some comfortable clothes, your wallet and phone and you are set. There is more than enough to do up there without taking heaps up, so just enjoy Broome as it is! 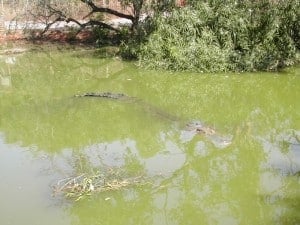 Where can you get cheap flights from?

The best way to score a good deal is to have some patience. To promote Broome or a plane company special deals are done regularly. Get an idea of the average price for a holiday at Broome, and then wait for a brilliant deal to pop up.

I have friends who got flights to Broome from Perth for $120 return, and then combined with some good holiday you have an amazing holiday for a steal! I would suggest looking in the paper and on various travel sites online. Sometimes the packages make it much cheaper, and you get free tours included!

There is a reason that Broome is so popular, and you really have to travel there to find that out! I guarantee you won’t regret the holiday.