If you are looking for a fun 4WD track and hike to a beautiful location, Ferguson Gorge on Moolooloo Station is well and truly worth a visit. We spent two nights at Moolooloo Station and looked at a number of other attractions in the area over our stay, but if you don’t want to camp at Moolooloo, you can just drive in and do the gorge, and then depart that day. 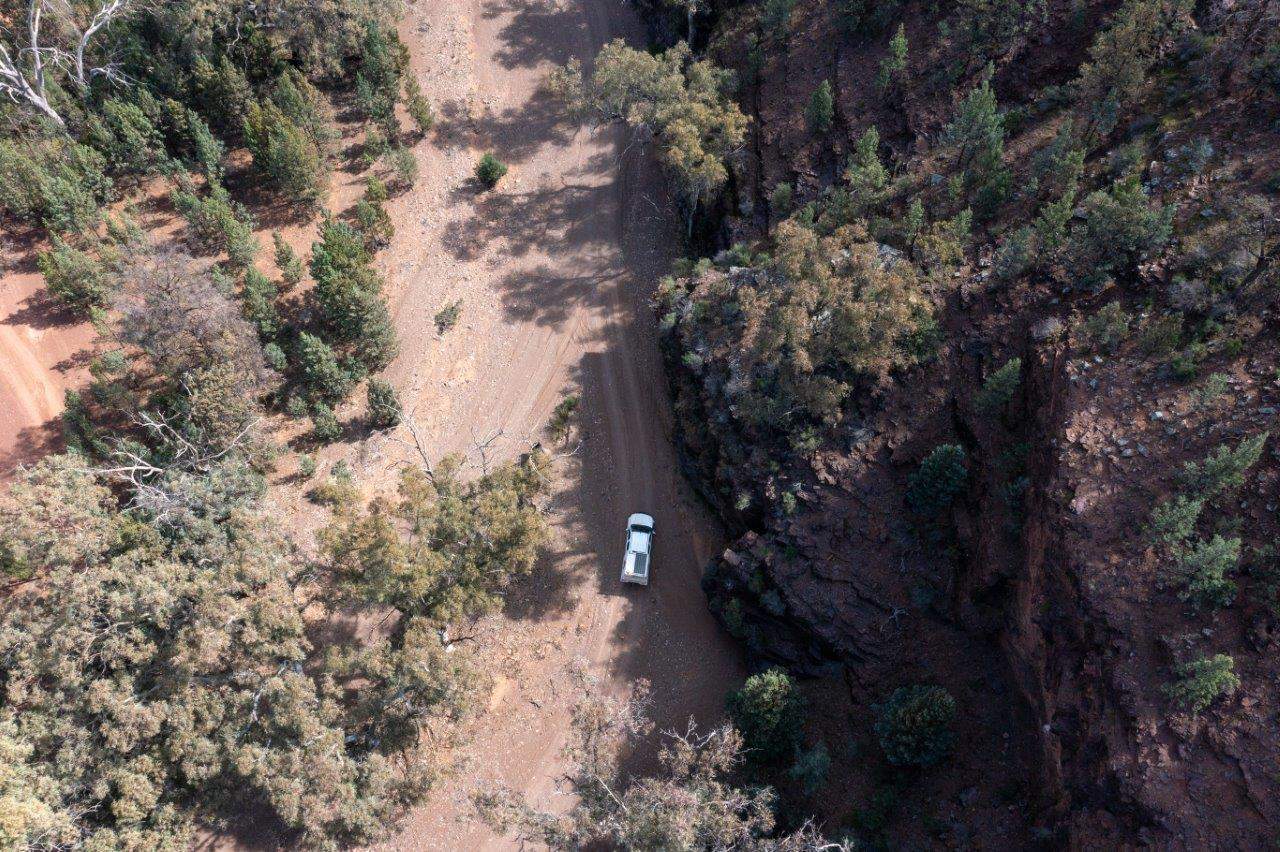 The Ferguson Gorge 4WD track is a heap of fun 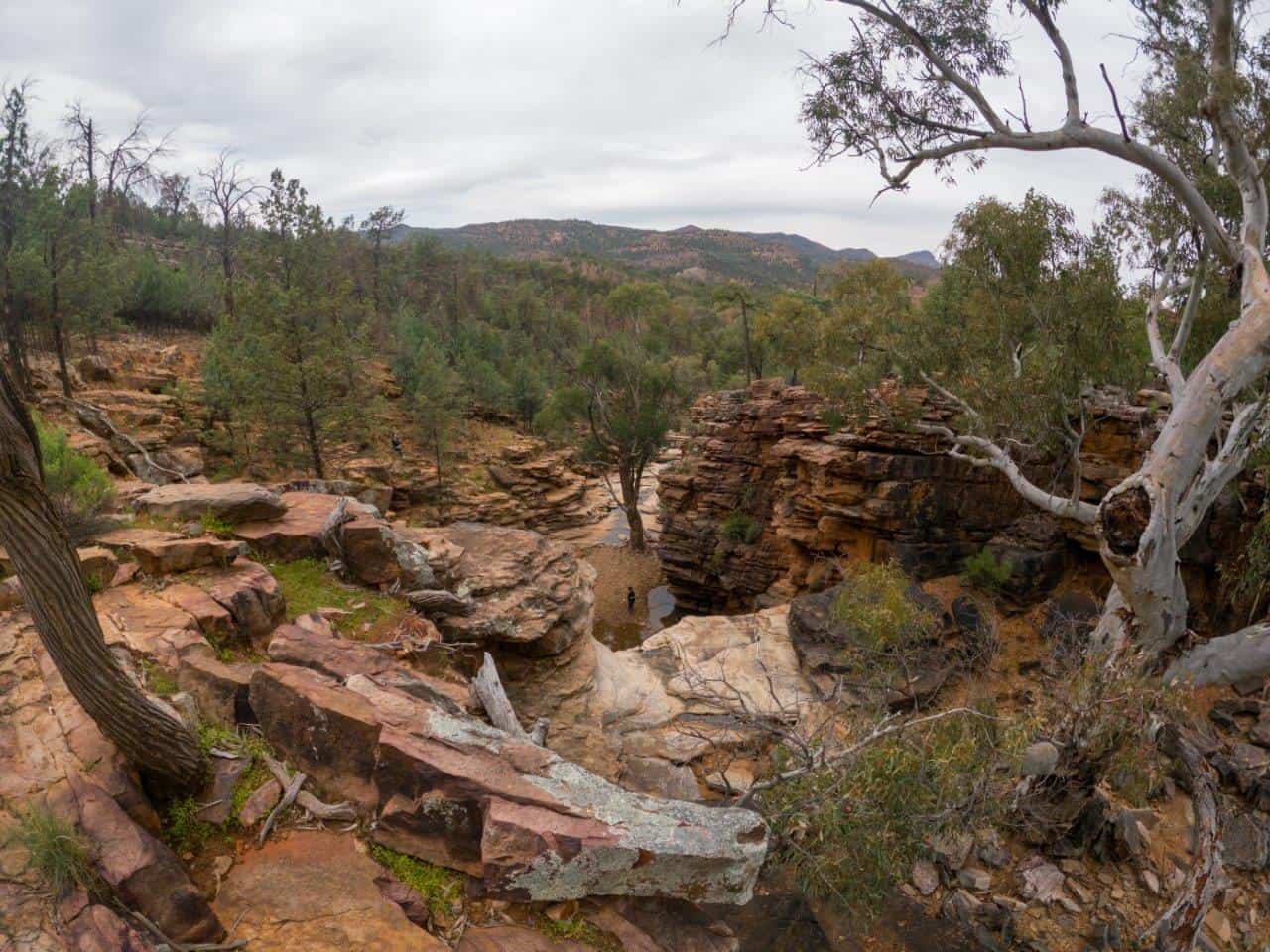 Views down Ferguson Gorge from on top of the falls

Like many of the 4WD tracks and attractions in the Flinders Ranges, you have to pay money to access this. It’s $30, and for that you get a key, map and permission to access a stunning area. You can either pay this over the phone, or you can do it when you arrive at the station. At the end of your visit, you can decide if you think it was worth it, but for us, I reckon its reasonable value.

The owners ask you to sign in on the white board, and sign out when you return for safety reasons. This means if you aren’t back in a timely manner, they can come out and look for you!

On that note, I’d seriously recommend a decent navigation system that works offline, and that you take with you. We run Exploroz, and love it for 4WD navigation, but it also works on foot. We would have found this handy, which we go into below!

The first part of the 4WD track is reasonably quick, and then it gets much rougher and slower, but you eventually end up at a carpark near Blinman hut, and begin the walk. Its worth noting that the map is a basic mud map, and there’s a good chance you will end up questioning whether you are going the right way. 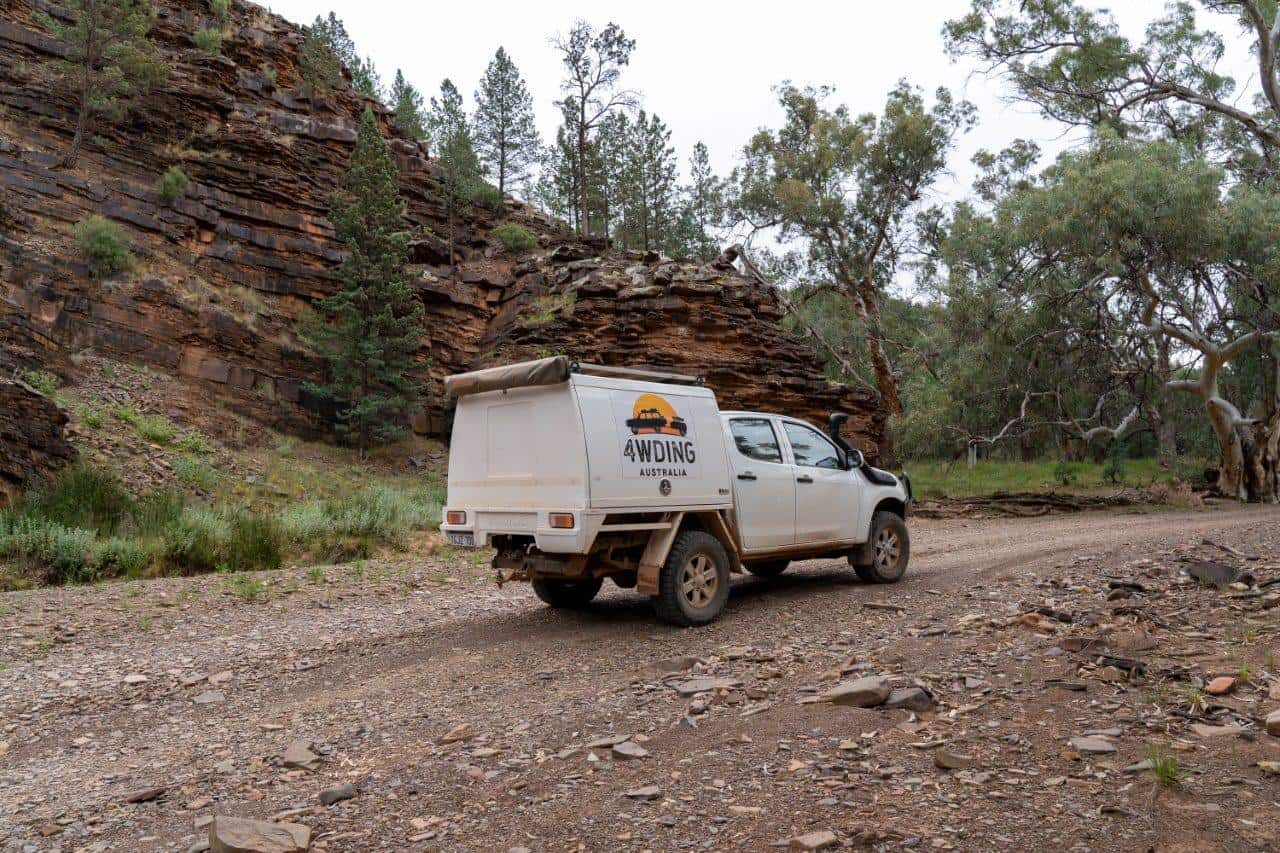 You can drive through the river beds when they are dry, with two distinct track options in many places

In essence, at a number of cross roads you can either drive up the river bed, or take the other track that goes up and down. They meet all the time, and we did a mixture of river beds and higher roads depending on which looked better. I guess in the wet you’d want to avoid the river beds, but it would certainly look very different!

The 4WD track is relatively straightforward, with only a couple of bigger rocks in the river beds to avoid, and a few short, sharp creek or run offs to cross. We saw a Subaru Outback at the Gorge, who’d knocked the trailer plug off but seemed to make it without any other damage, which I was impressed with. 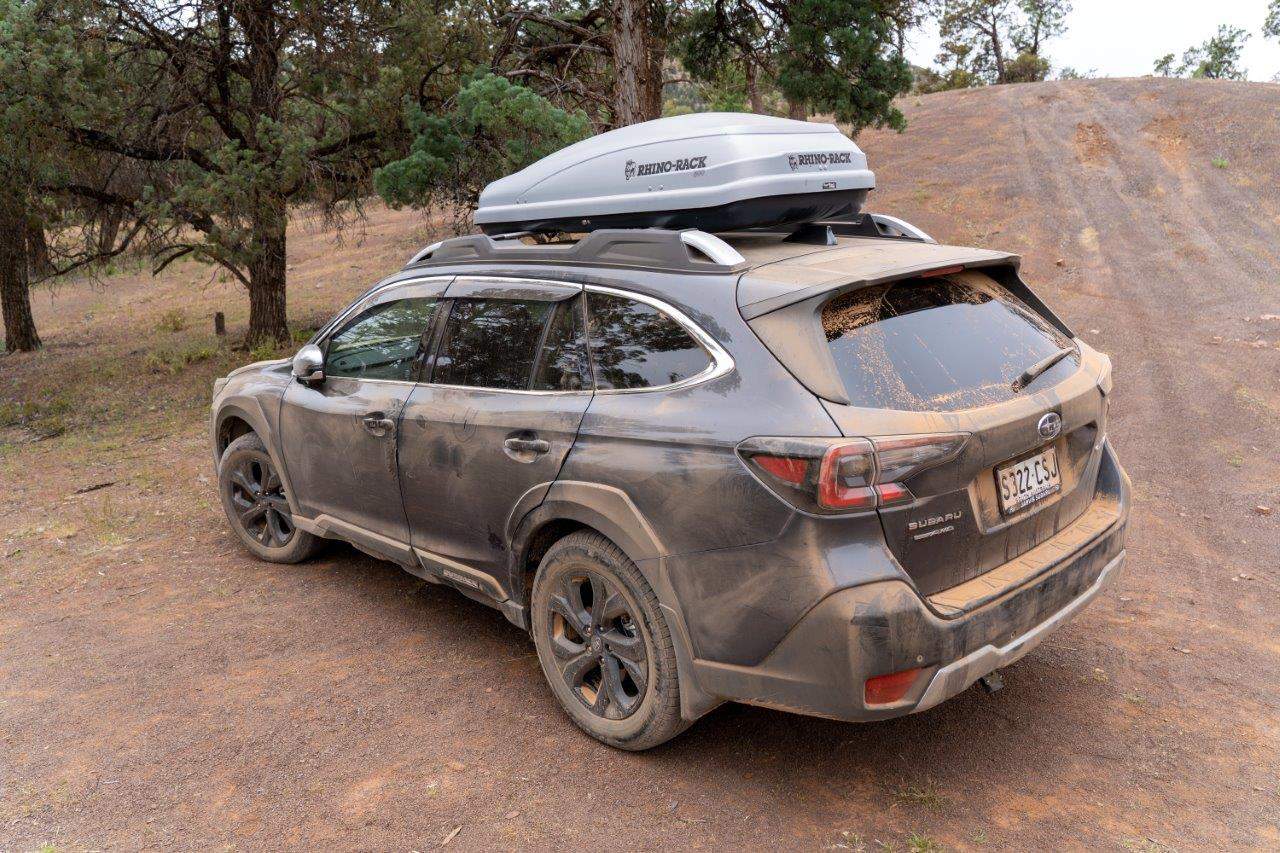 There’s a lot of country that we hadn’t seen before, and we really enjoyed the way it changed so much in a short drive. I did have it in low range for the second half of the track, which was mainly for slowing down often for the various holes and dips, rather than the torque needed to get up or around anything. 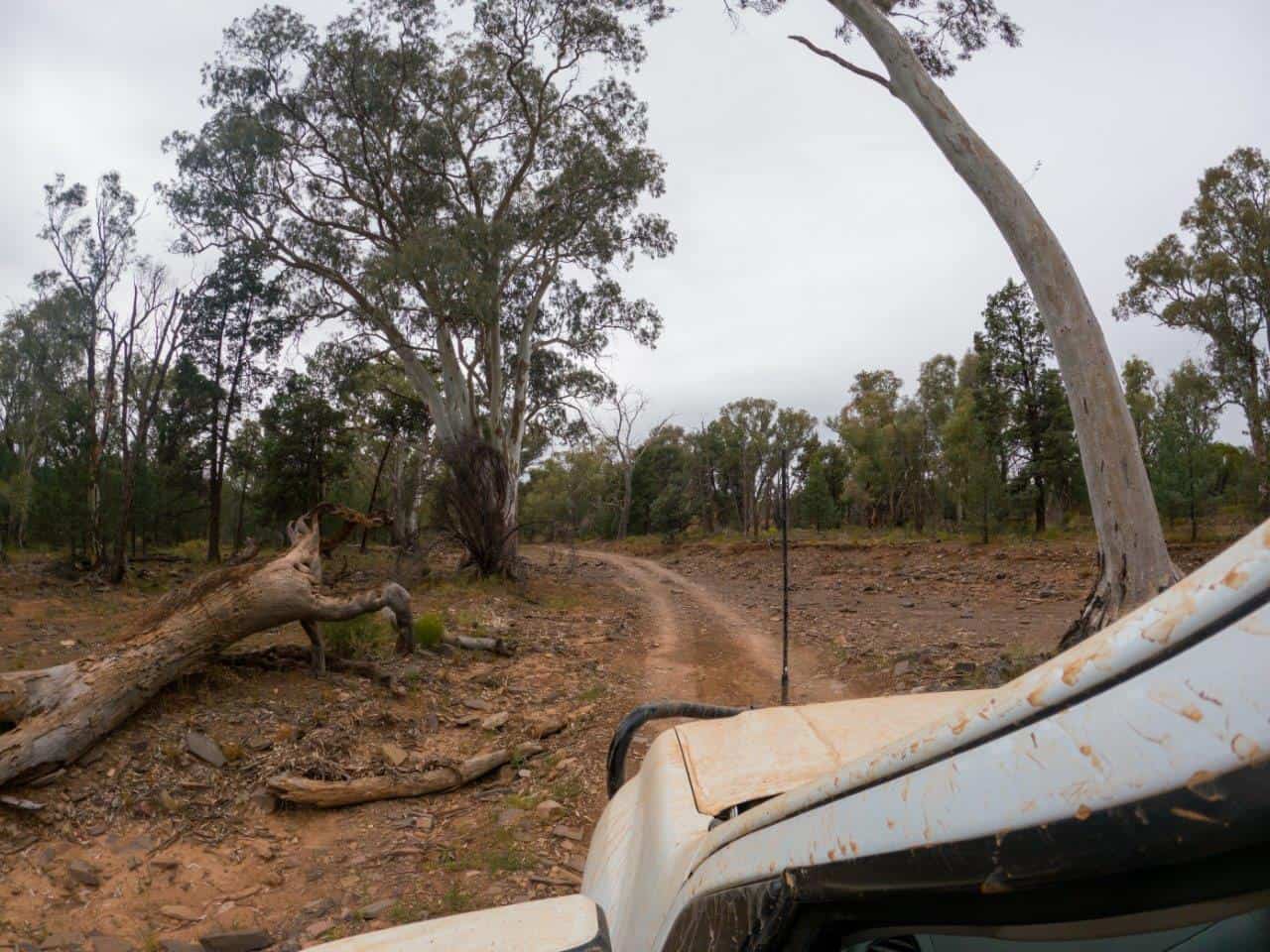 Most of the track is fairly easy 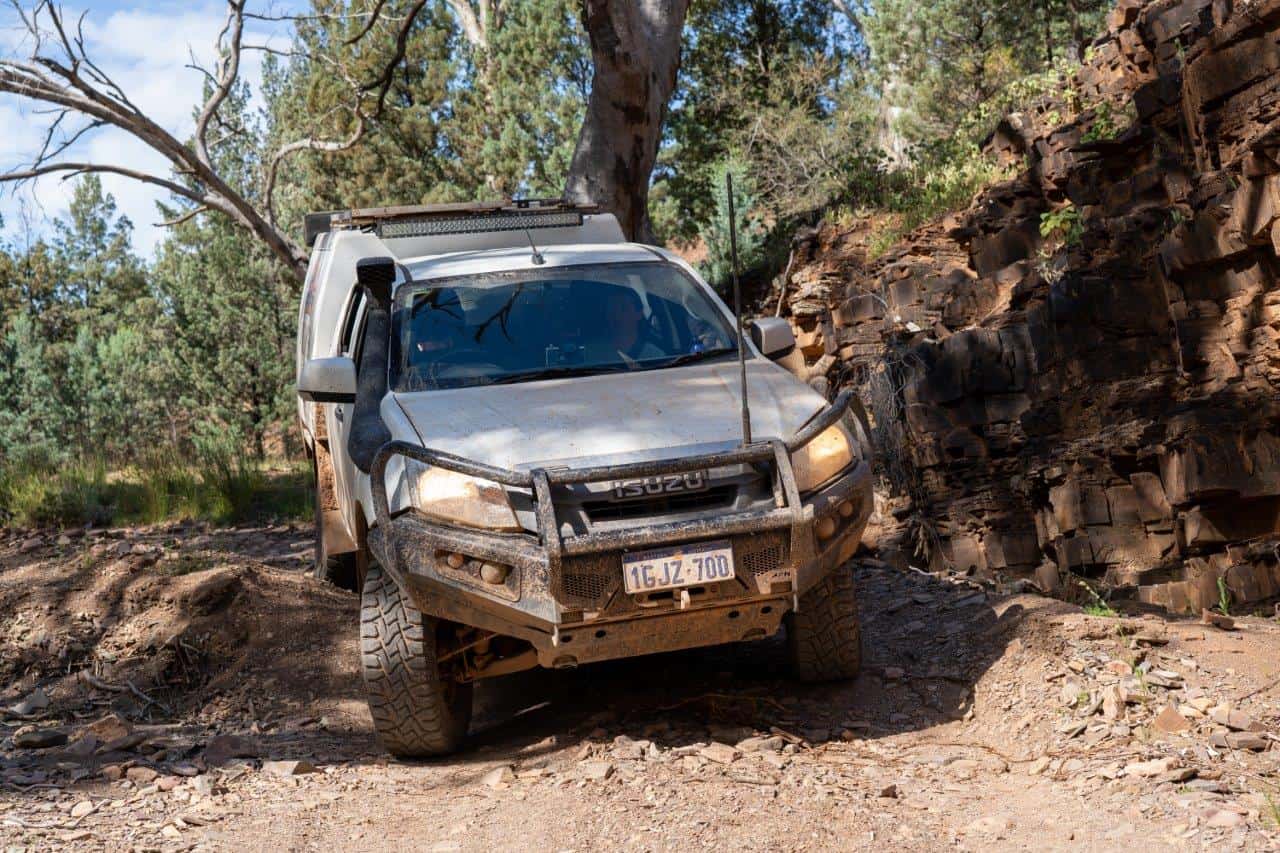 There’s a few places to pick your line, but nothing complicated at all

When you arrive at the walk, you’ll see a number of signs that are easy enough to follow. Note that they are near piles of rocks, as these will become your only form of navigation. It is very easy to lose the trail if you aren’t paying attention, so keep a keen eye out for the rocks.

The walk is easy in terms of no boulders or climbing, but its quite taxing on the legs climbing up and down hill after hill. Rest assured though, it eventually flattens out and for some reason the walk back is much easier. 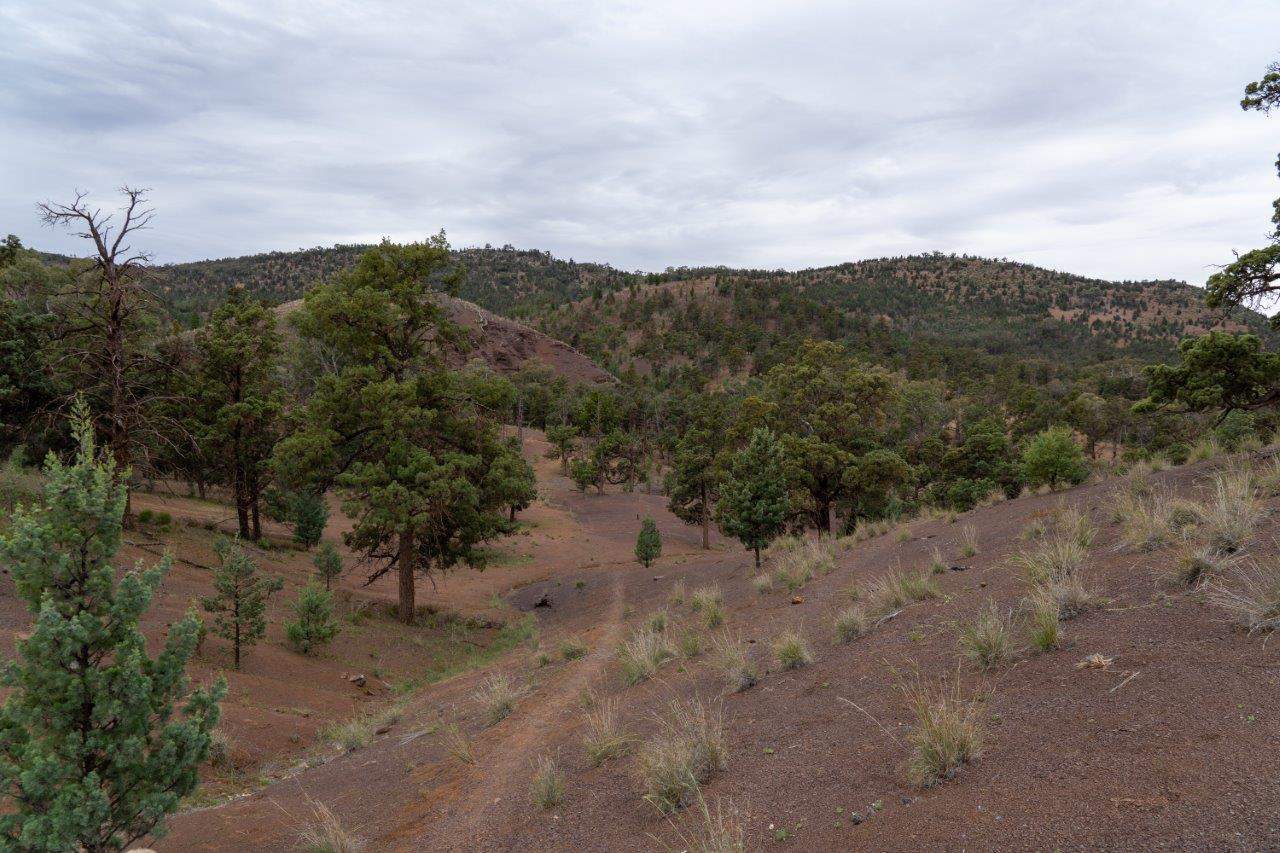 You’ll walk up and down a heap of hills 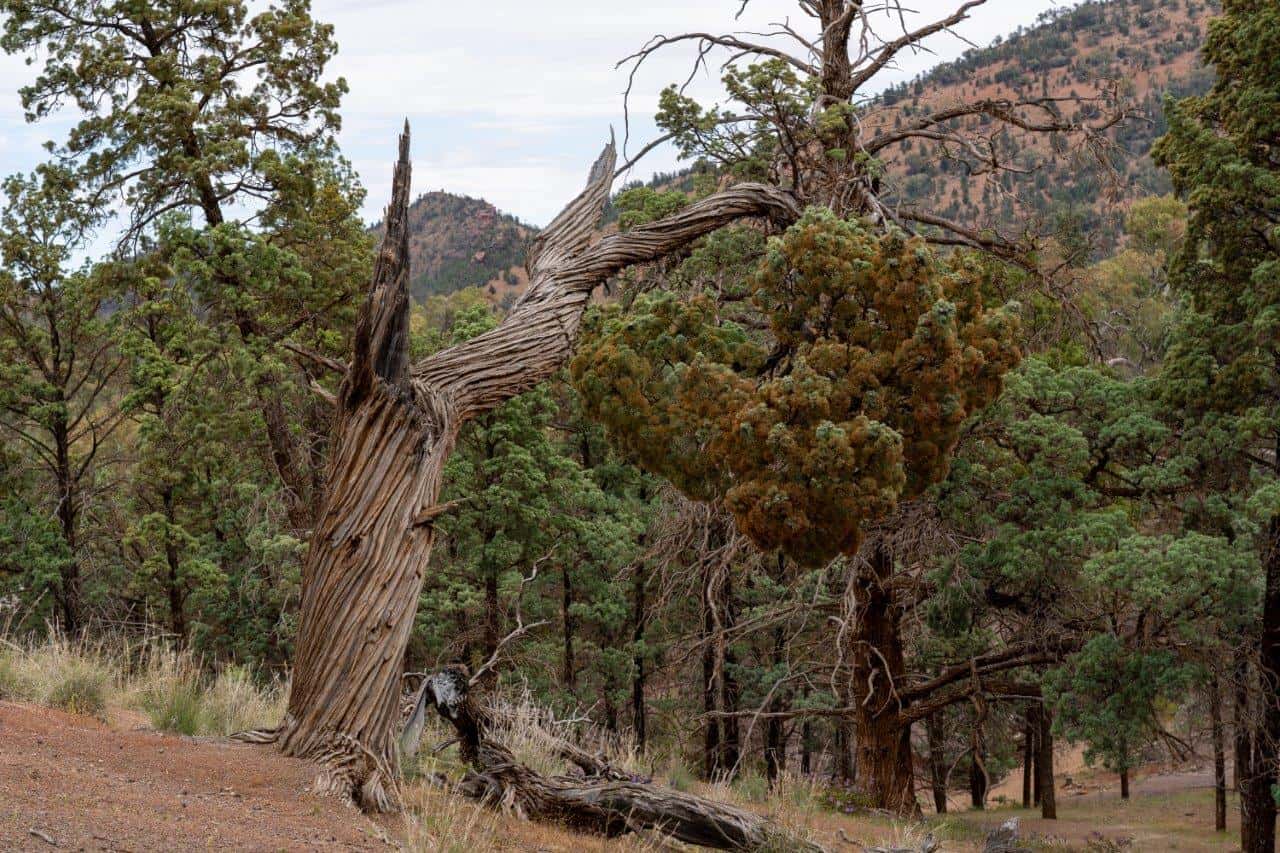 Look out for a unique tree on the way

I consider myself to be relatively fit, and by the half way mark on the way there I was starting to get worn out, but its not long until you get to the gorge itself. Walking up to the gorge, I thought hmm, this looks alright, but I wasn’t blown away until I started to climb it, and then it just gets better and better. 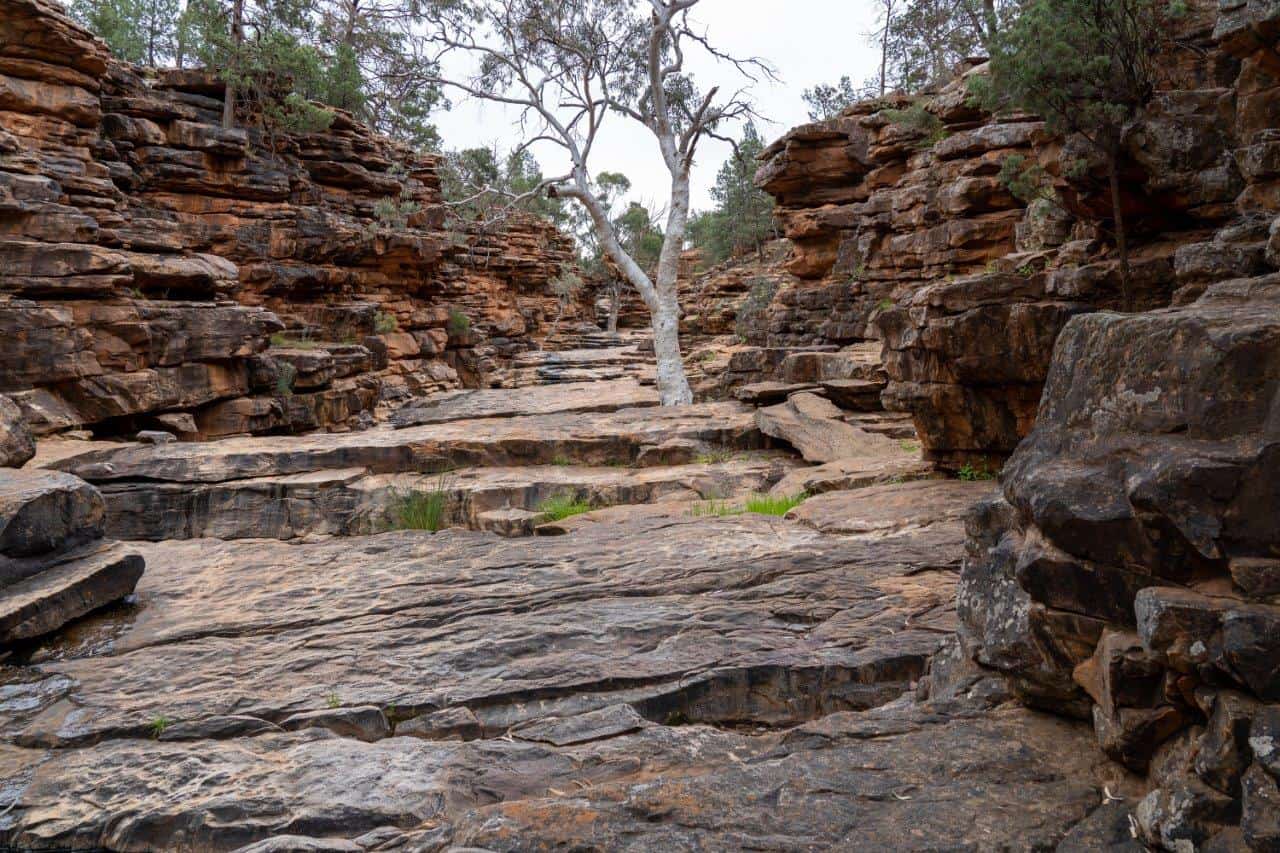 Ferguson Gorge gets better and better as you climb up it

The gorge is a series of pools with little waterfalls (when flowing) between each pool, and it gets prettier and prettier the further you go up. Eventually, you’ll end up at the top pool which is quite picturesque, especially looking back down the gorge. You can clamber your way to the top of this, but I couldn’t see much water up further and the view from the top pool is as good as it gets. 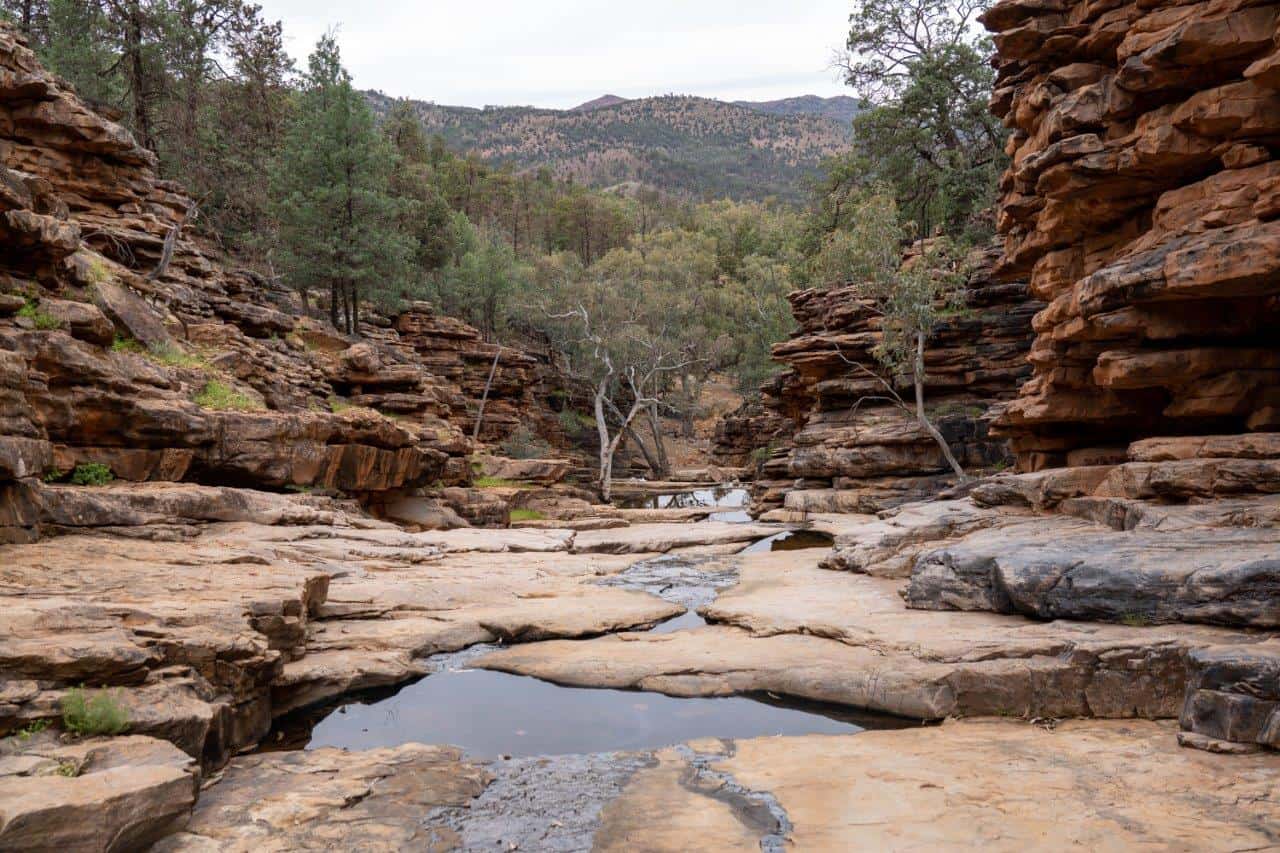 The views from the middle to top are spectacular 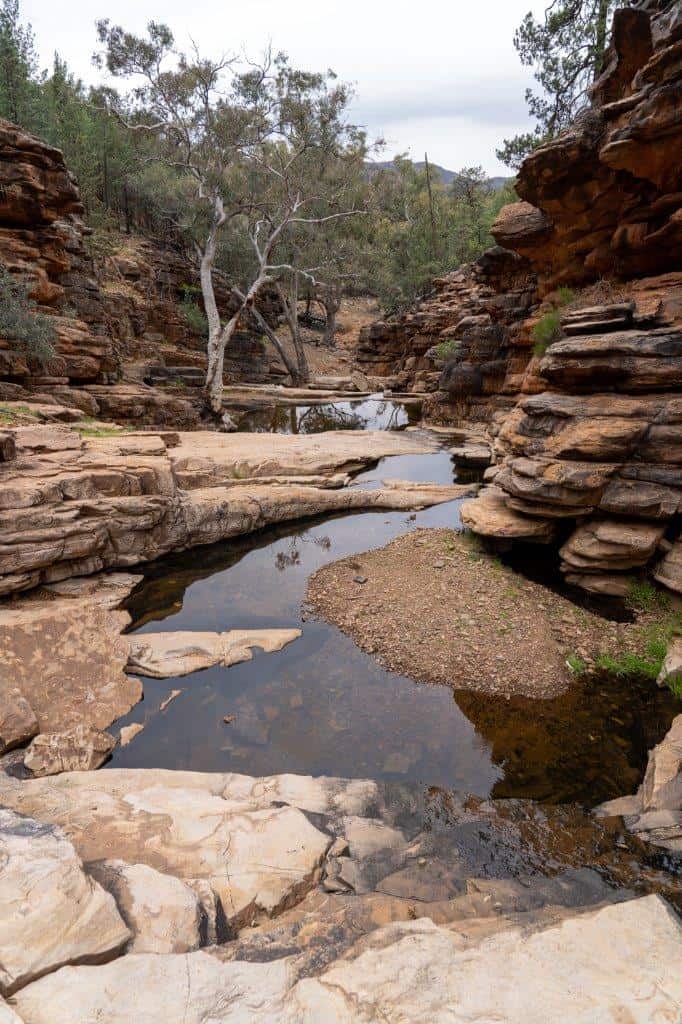 Lots of pools that are quite pretty 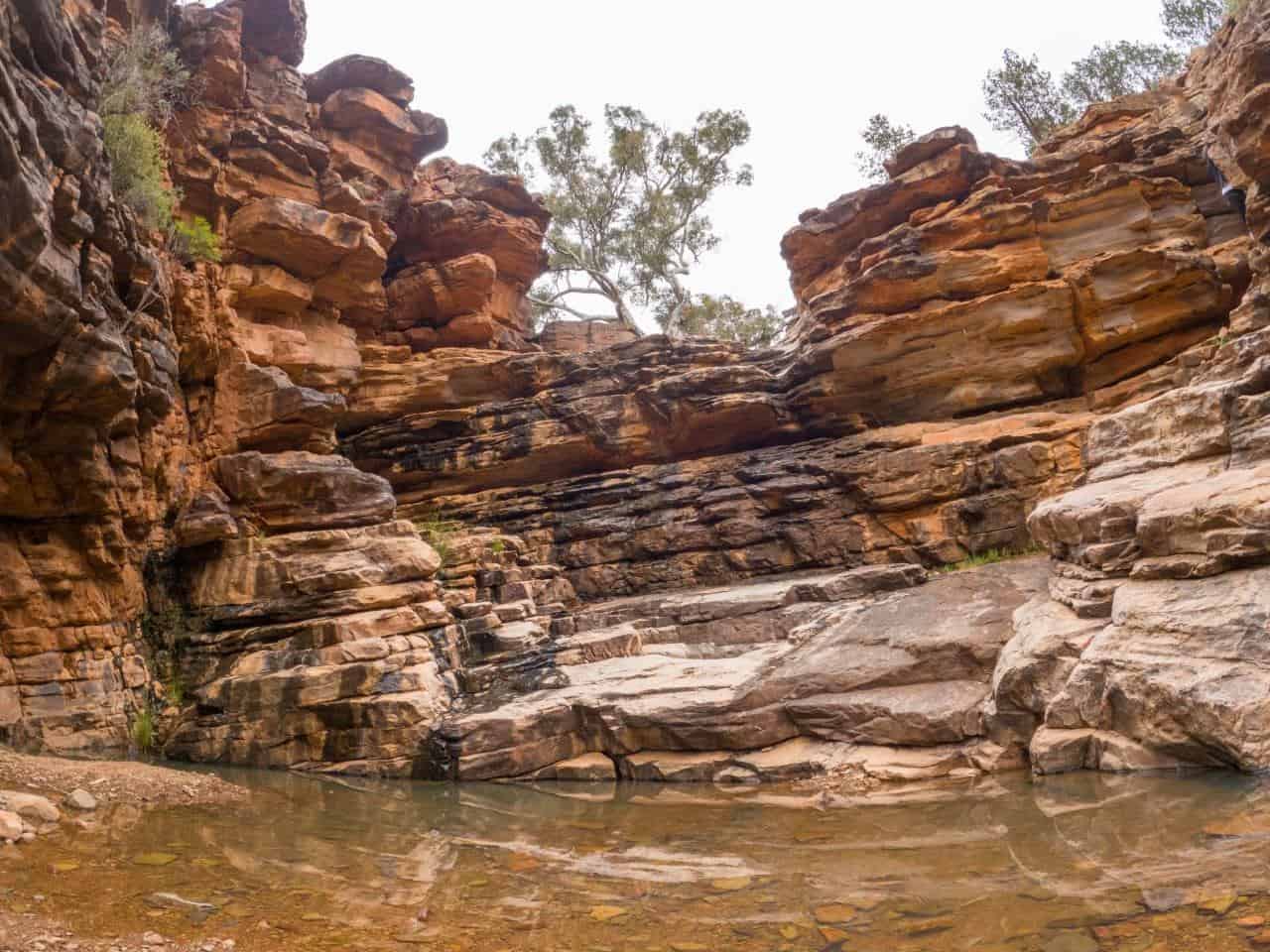 There was still a decent amount of water, and a little trickle of water

On your way back, make sure you pay attention for the signs, or you’ll end up like us, following someone else’s pram marks and doing a whole heap of walking for no reason. Looking back at our Exploroz app (which Sarah neglected to mention was available on my phone, in the backpack haha!) we did a giant loop, miles away from where we should have walked! 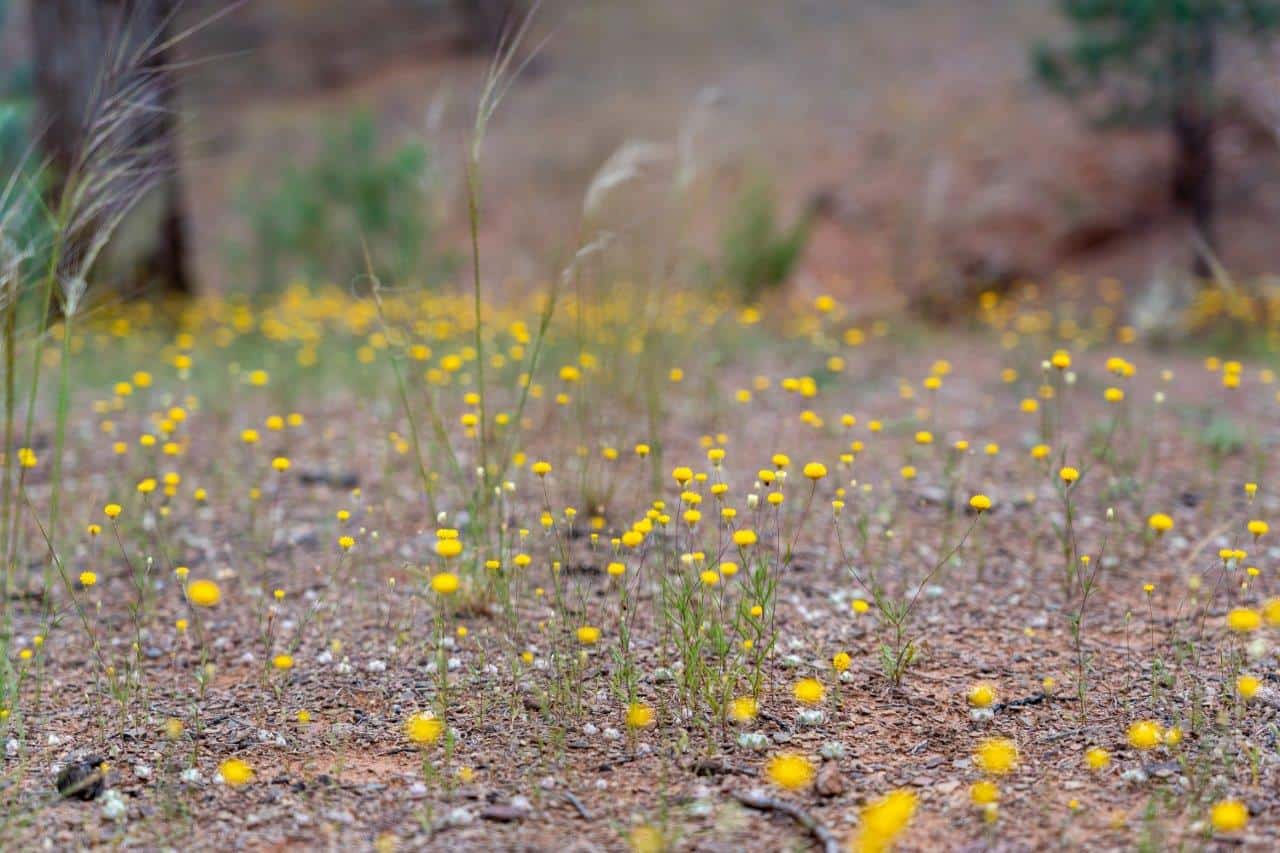 There were some nice flowers out on our walk back, but we went way off the track!

How long do you need?

From the homestead, we took just over 4 hours to drive out, walk to the gorge, kick back and relax for a while and then walk back, with the drive back to the homestead still needing to be done. You could do it quicker, but if you can have a snack or lunch at the gorge and spend a bit of time soaking it up, you should.

I would bank on 5 hours to do it comfortably from the homestead to the return. 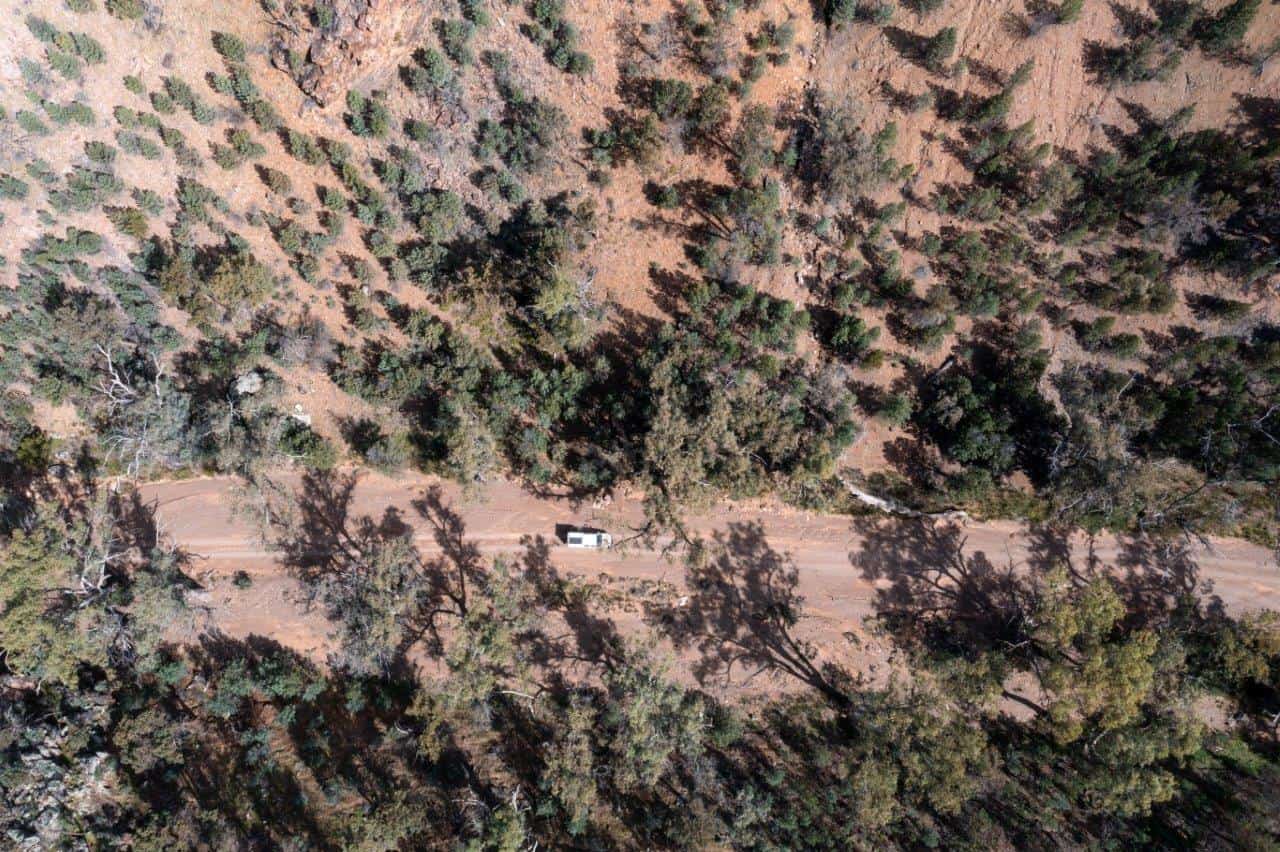 Make it a relaxed half day out, and you’ll have fun

We also paid $30 to do the 4WD Track at Mern Merna Station, and I said to Sarah how are we supposed to compare these? They are both stunning, and Ferguson Gorge is totally different in every way. I’d say its absolutely worth it, and that you should do it slowly and appreciate the region for what it is; stunning and nothing more.

On a technical level, this won’t challenge you too much, but the Gorge is pretty spectacular. I’d recommend it, and feel the price is reasonable. 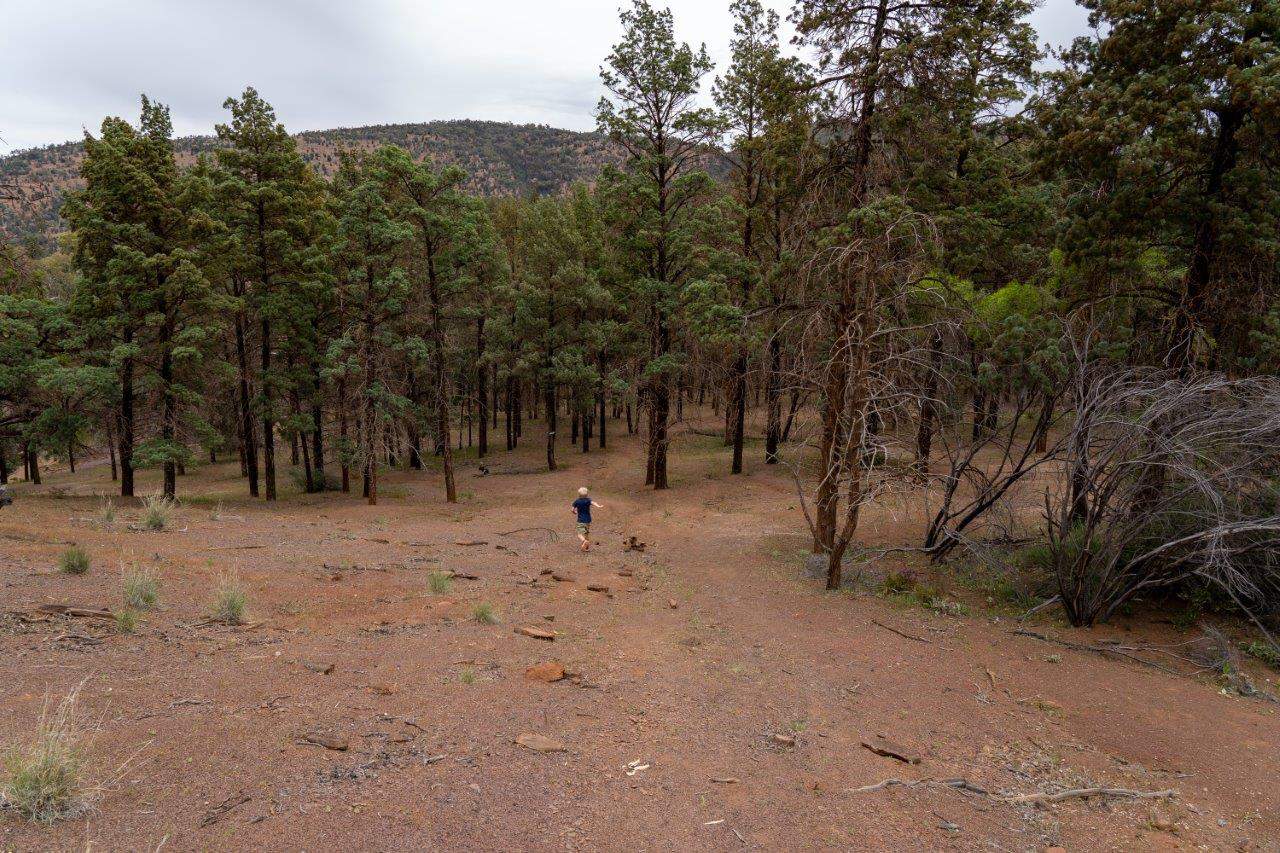 Our kids were well worn out by the end