The Eyre Peninsula has some ripper camping, and after heading down the coast from Port Augusta hitting all the camp grounds, and then the Lincoln National Park, we booked a night into Yangie Bay Campground to look around, with the real hope of camping at Black Springs Campground, but we had to suss it out first.

We really wanted to stay at Black Springs, but had to see if we could get the camper there

Where is Black Springs Campground?

From Coffin Bay to Black Springs Campground its 29km, and Google reckons its only just over an hours drive in. In reality it takes longer than this, and you need a 4WD to get there. 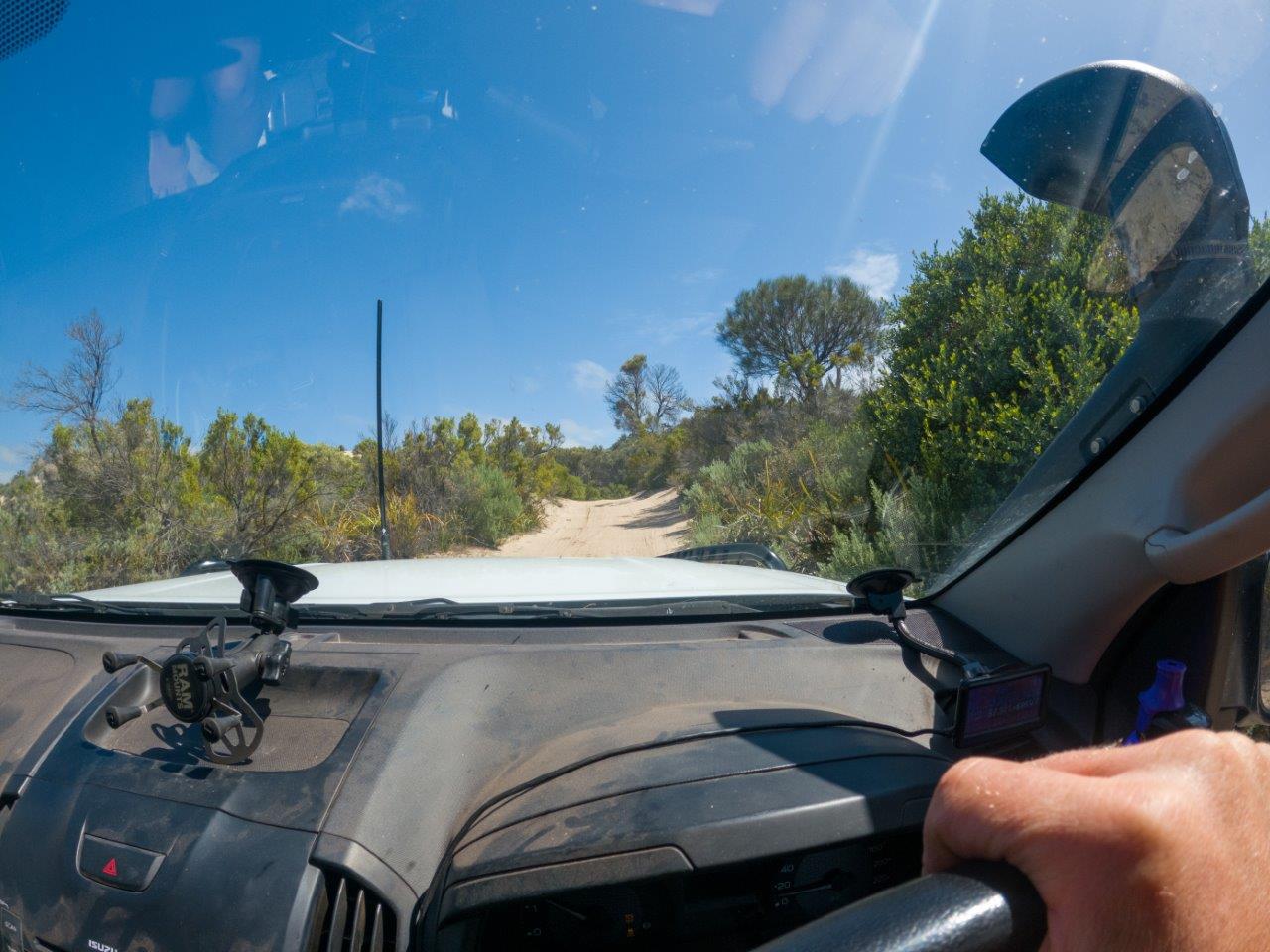 I wasn’t sure what to believe when we got to Coffin Bay. We’d been told that the tides affect when you can go, and then we heard that there was no beach driving, so I was a bit confused. We also let our tyres down considerably for the sand dune driving that we’d expected, and were off the mark again. We were confused by the sign at the start, although it soon made sense. 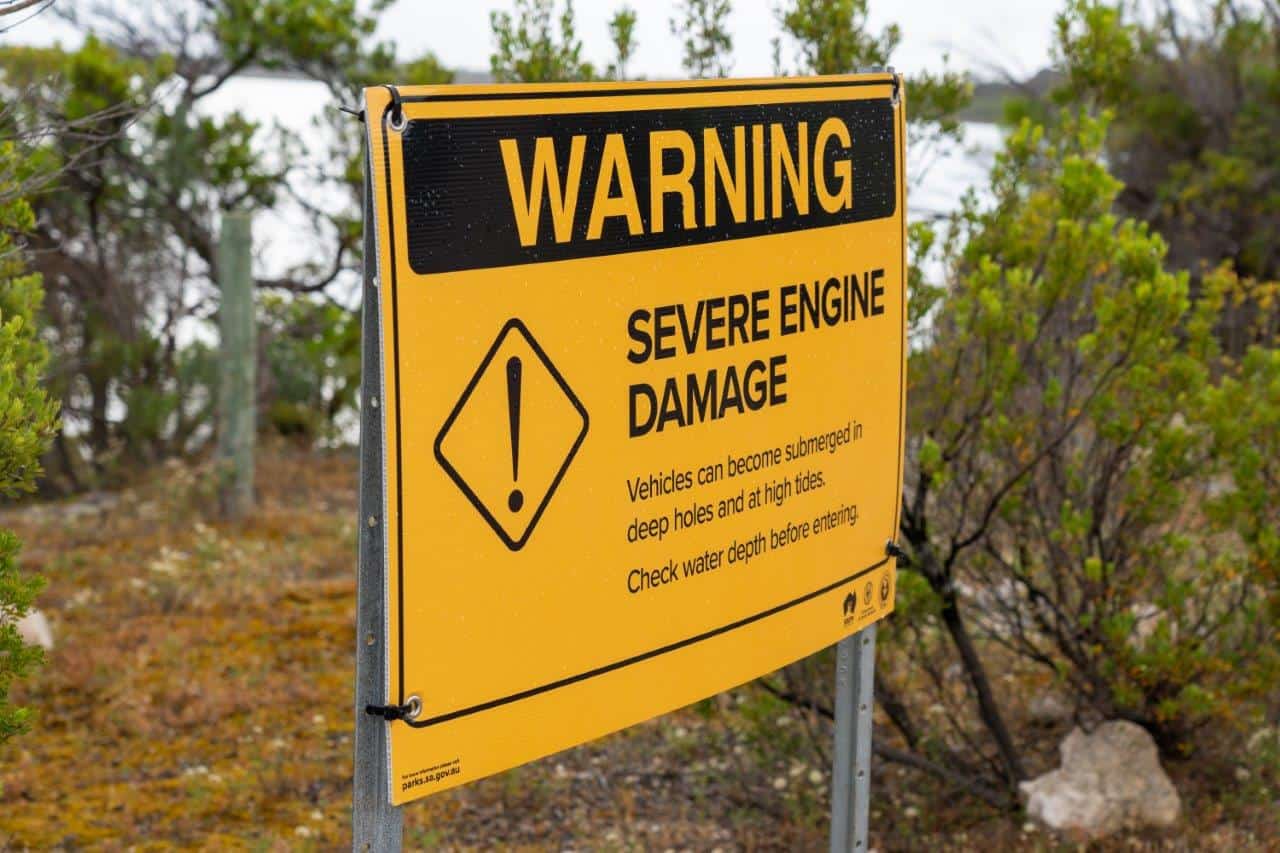 The track starts just beyond Yangie Bay Campground, and goes onto gravel, and then immediately onto sand that can be fairly soft, skirting around the bay, where you can clearly see water comes over in a bit of a tidal plain.

It then turns into a rocky 4WD track not too dissimilar to that going out to Memory Cove, and alternates between solid hard ground and rocks, with a very small portion of the track being soft sand, with some minor hills to climb up and down.

Our first visit to Black Springs was just with the 4WD, to see if we were happy to drag the camper out, and I noted that there were a number of puddles around, some of which were quite deep, and even over wheel height. This water is salty as, and it comes from the really high tides. In most places you can drive around the water, and you absolutely should. However, I can see if you went on a really high tide, you’d be literally driving through sea water from the ocean until the tide went down and it all drained out.

On our first visit we hardly had to get our tyres wet with the salty water, and we decided we were happy to drag the camper out, so we booked two nights, and the following morning we hooked up, ready to go. I dropped the tyre pressures to 18, 22 and 25 PSI on the front, rear and camper tyres, and we headed off nice and slowly.

I could see almost immediately the tides had come up much higher and there was a lot more water around, which I wasn’t too happy about. Fortunately none of the puddles were very high so we continued very slowly, careful to avoid salty water splashing up on everything. 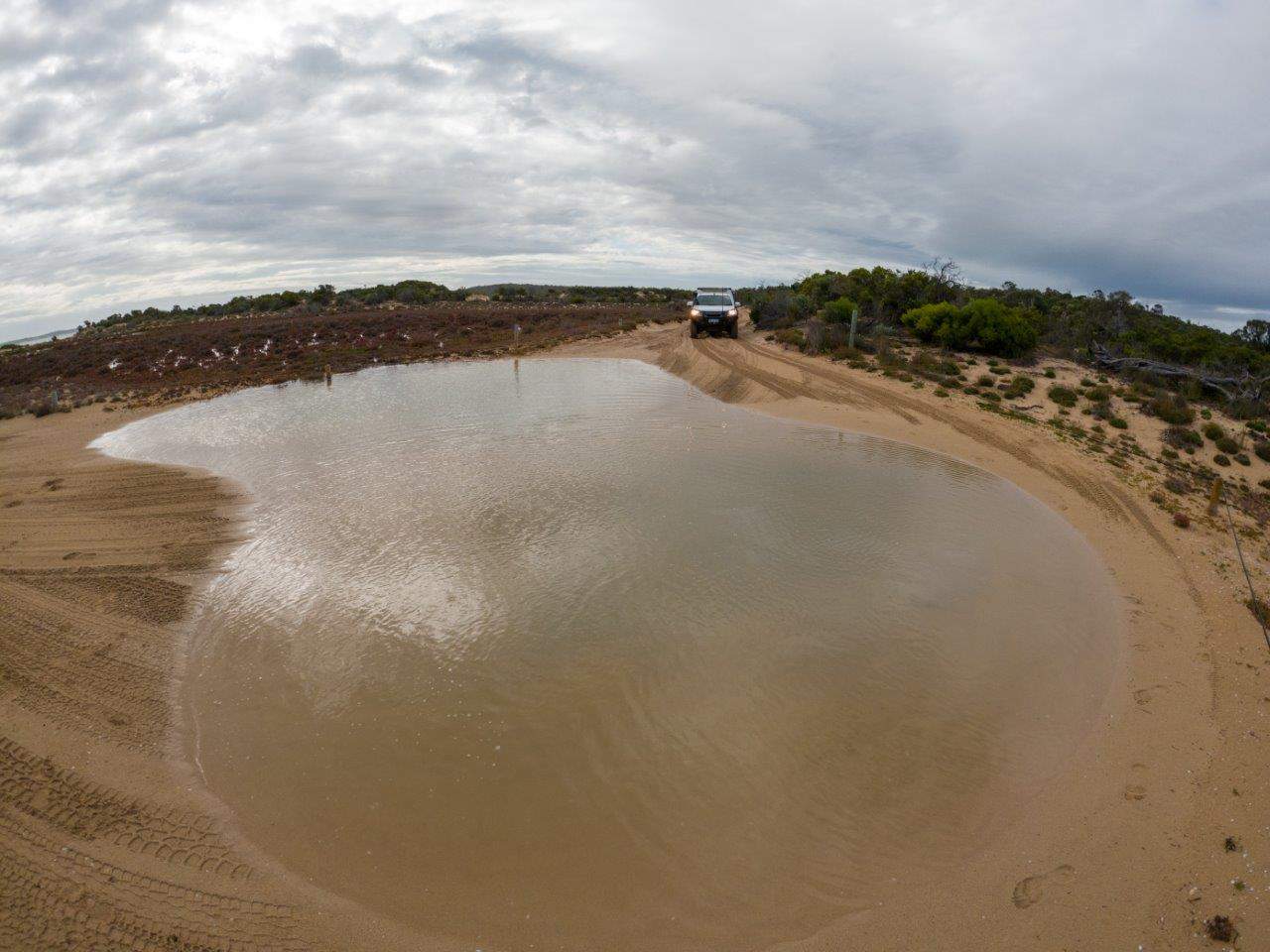 The tides rise and fill the hollows with water 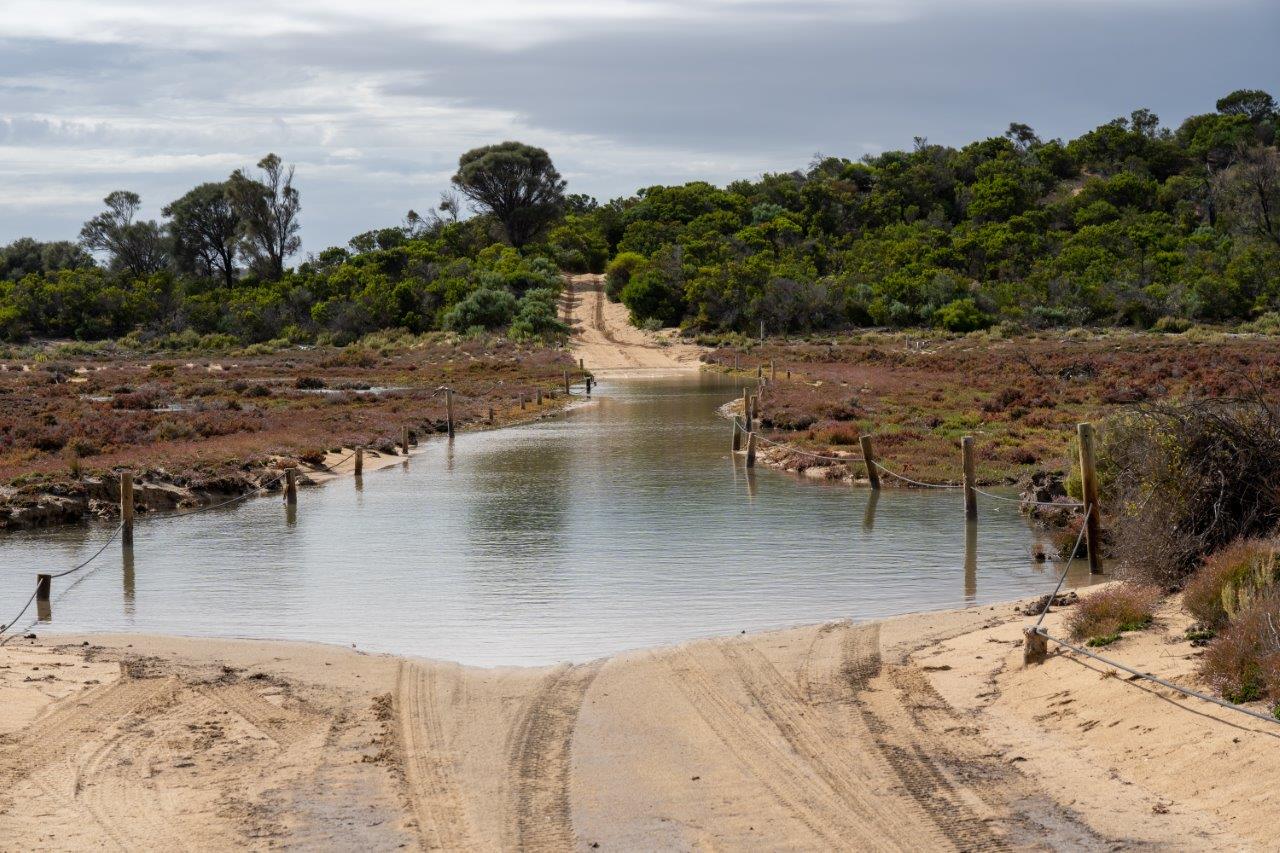 Some of this would have been well over wheel height, but there’s a bypass near the dunes 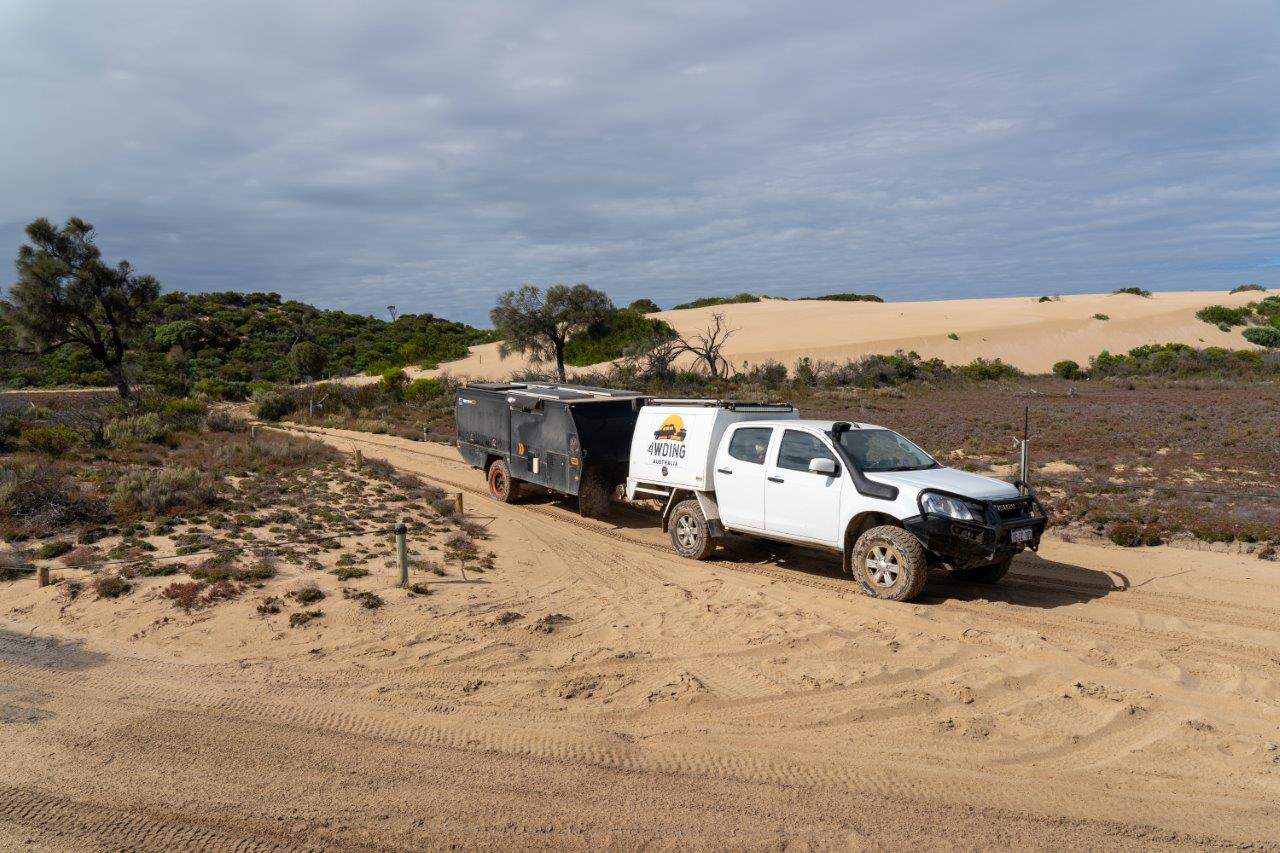 Dragging our 2.3 tonne Hybrid Camper in

The first dune almost resulted in us getting stuck but it clawed its way through, and I was feeling fairly confident, until we came down another section along some sand near the beach, and the Dmax front end bottomed out, which resulted in me slowing down a bit more and coming to an abrupt stop.

Out with the Maxtrax and we were moving again, and then had to do it once more. The rest of the track is fairly straightforward, with some fairly rocky and rough sections before you arrive at Black Springs. 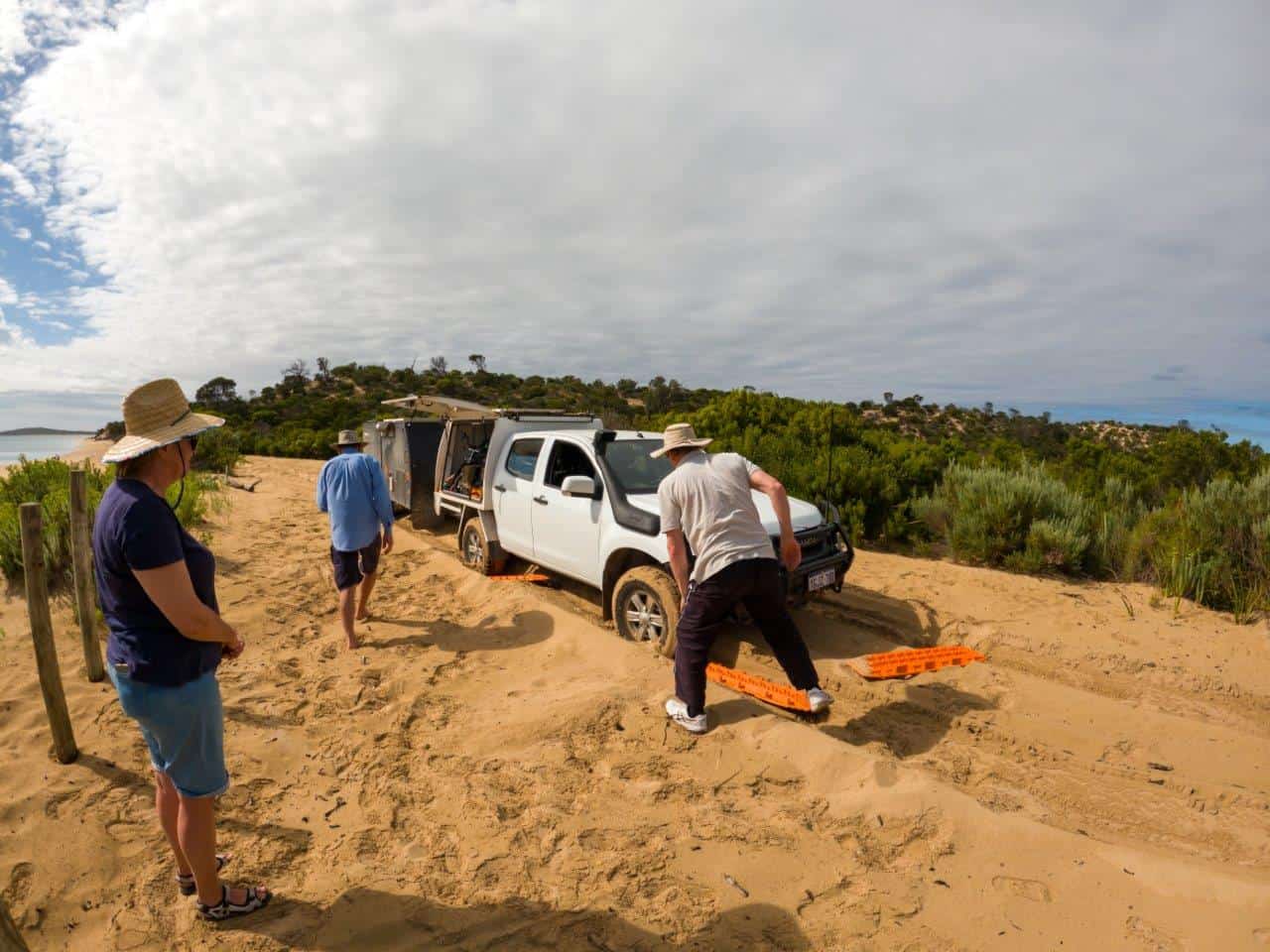 We sunk down after bottoming out on some big holes 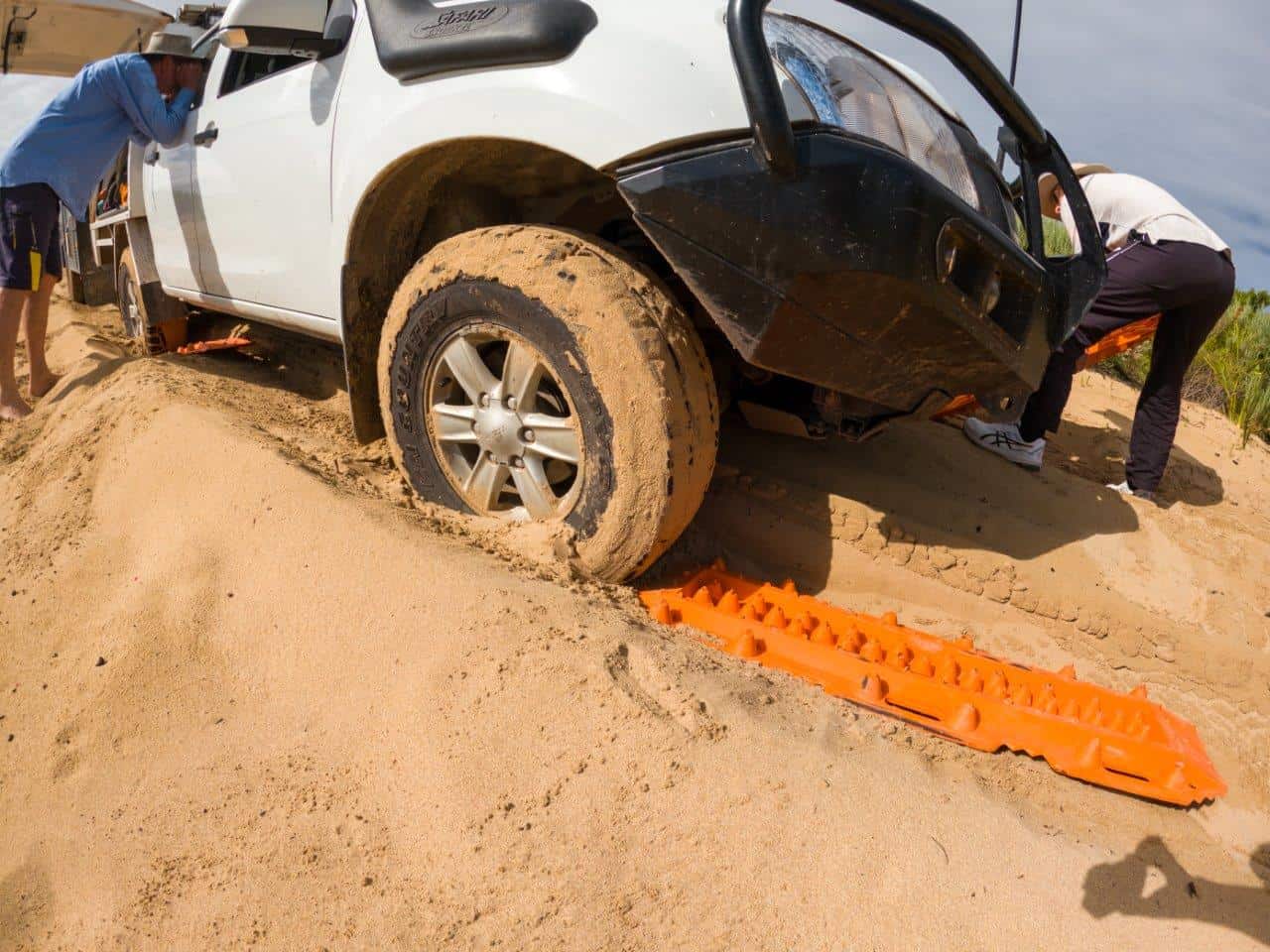 Out with the Maxtrax twice, and we were sorted

How long does the track take?

Our first drive from Yangie Bay to Black Springs took just under an hour, and we drove back a bit quicker once we were familiar with the conditions. Towing the camper out and back in took about an hour each way. 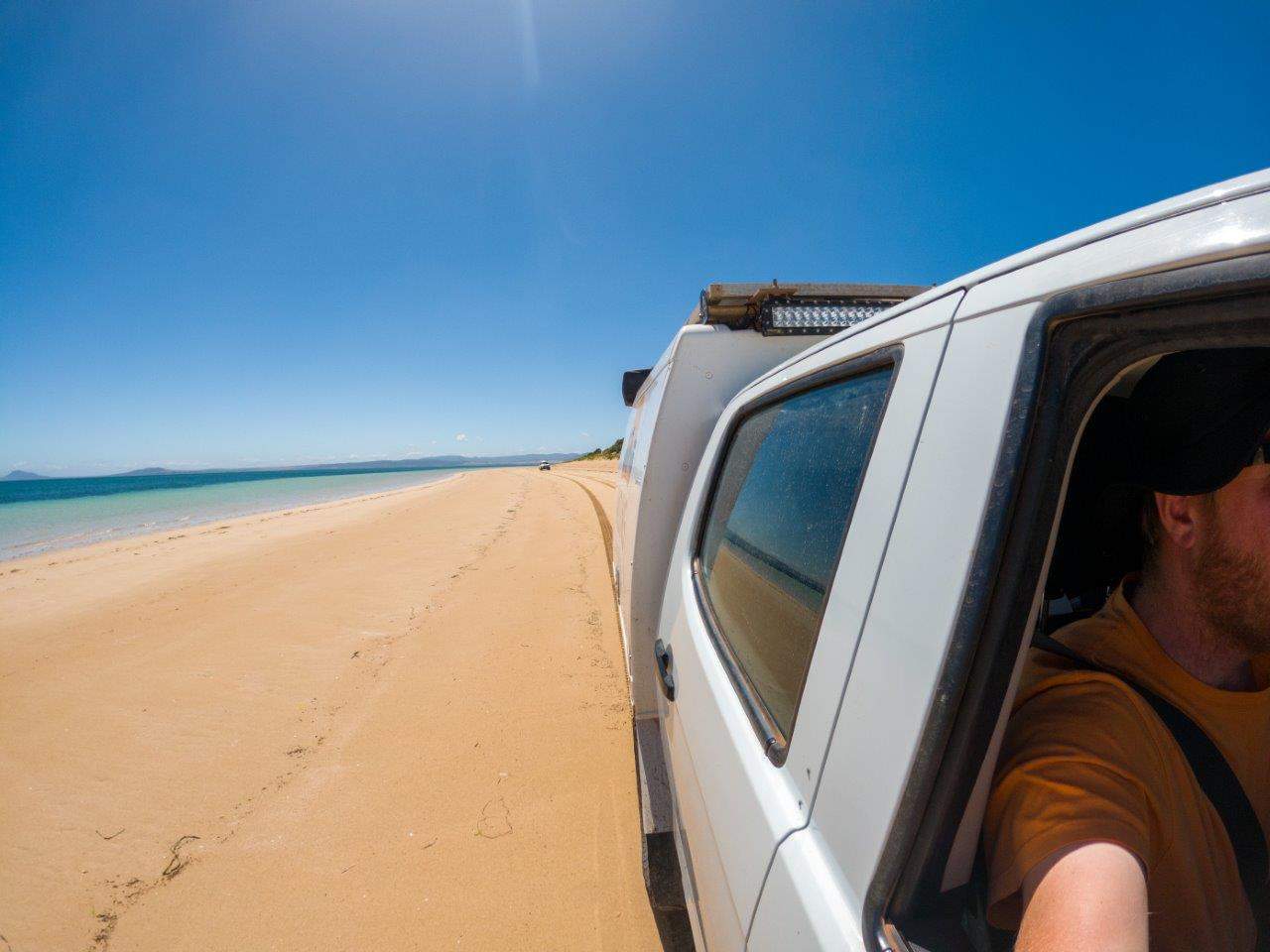 Can you take a camper or hybrid?

We towed our 2.3 tonne hybrid camper out without too much of a mishap, and if the trailer is no bigger than your 4WD and you have a decent tow vehicle, you should be fine. Anything over 2.5 tonnes though, without a pretty serious tow vehicle is going to have a hard time on the soft sand.

We saw a couple of other camper trailers at Black Springs, but none further than that, and unless your trailer was nice and light, and you had a powerful tow vehicle I’d probably leave them at Black Springs and head in for a day trip. 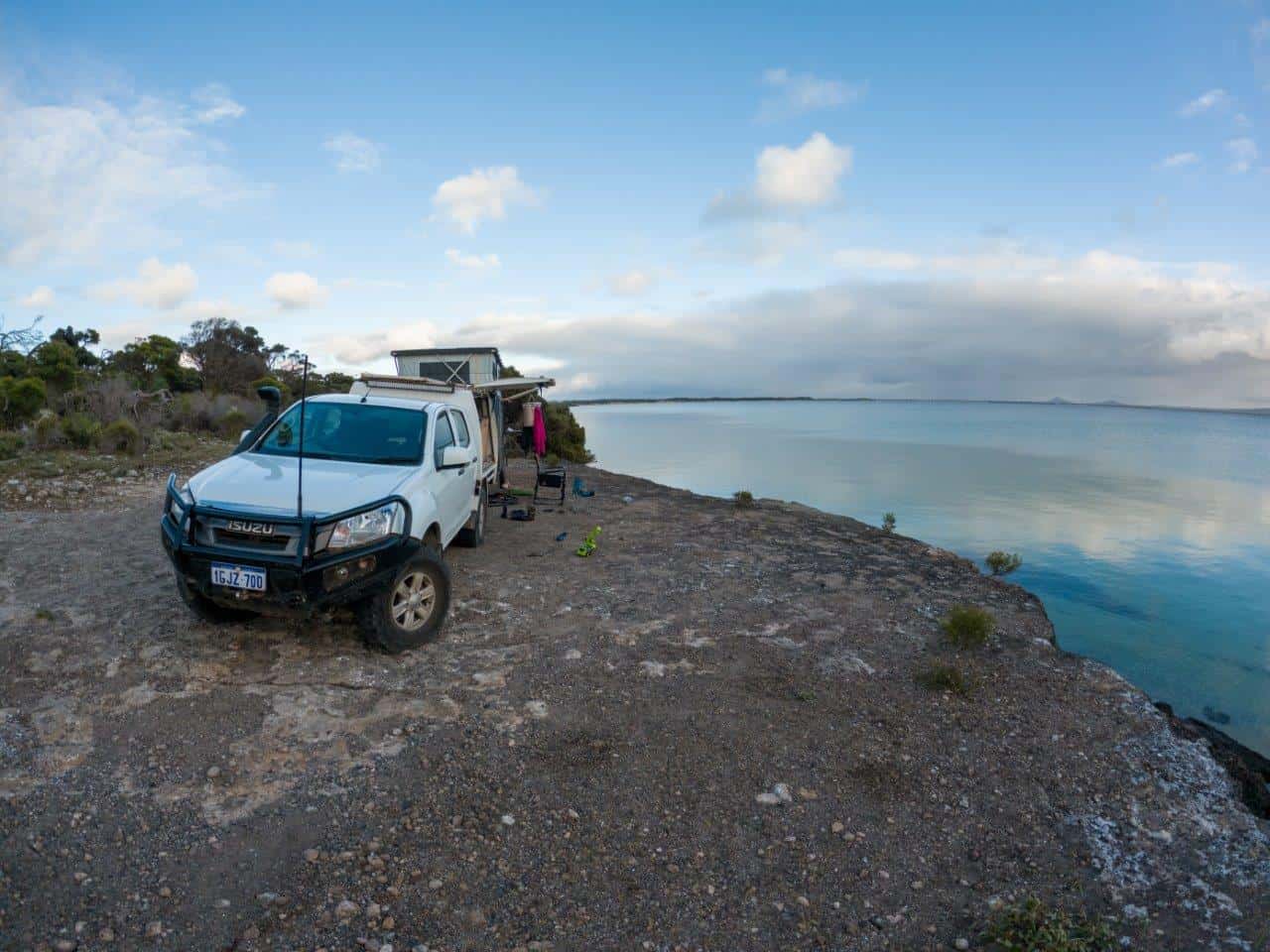 If you have a heavy trailer, leaving them at Black Springs is probably wise!

Black Springs Campground has a toilet, designated camp sites and that is it. 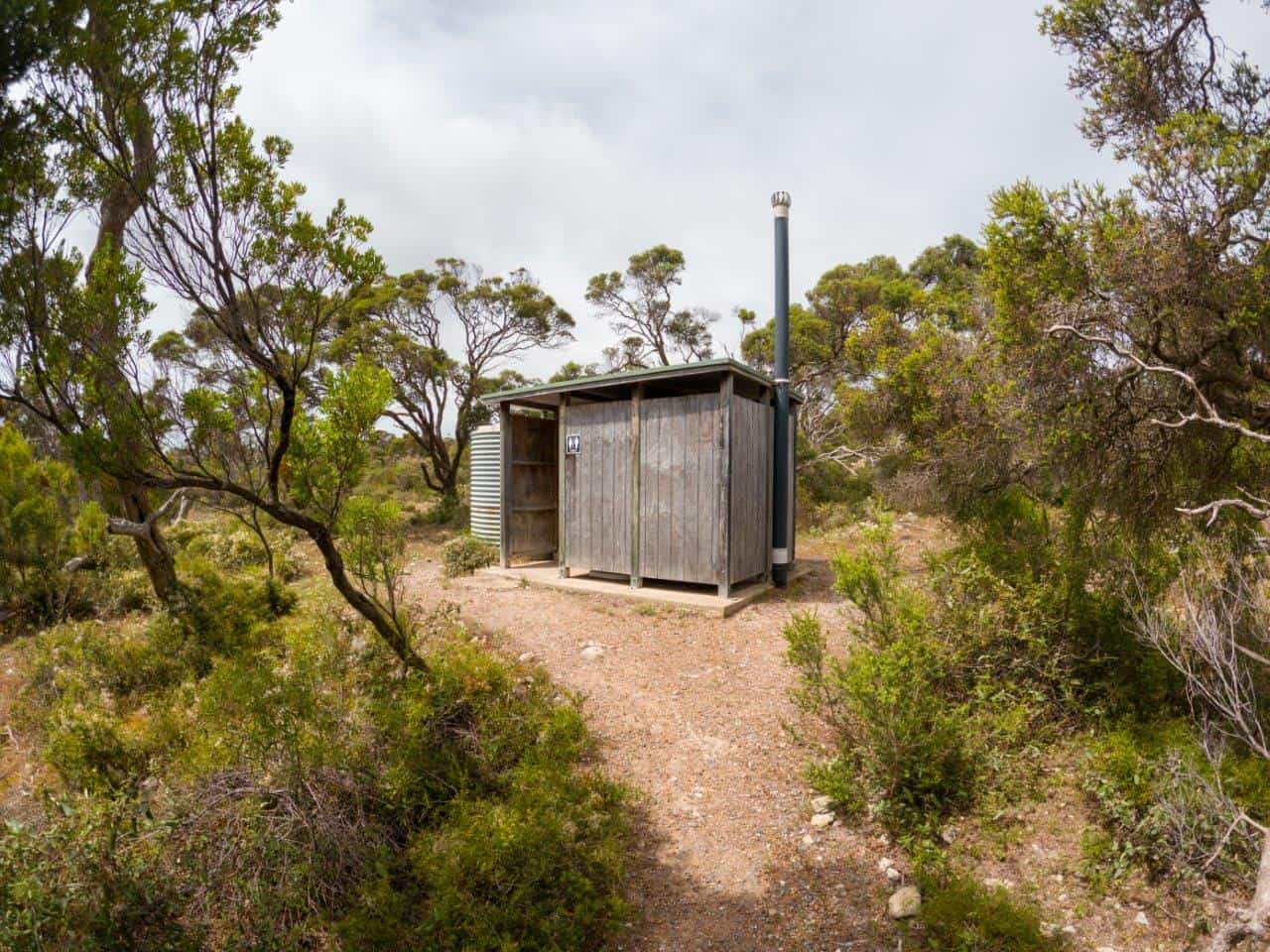 The toilet at Black Springs Campground

The Black Springs Overflow is as good, or better

We had a good look through the Black Springs Campground on arrival, and also looked at the overflow, which is only a few hundred metres away to see what was better. Camp site number 7 in Black Springs is nice, with the rest being fairly small, and not having that great views. 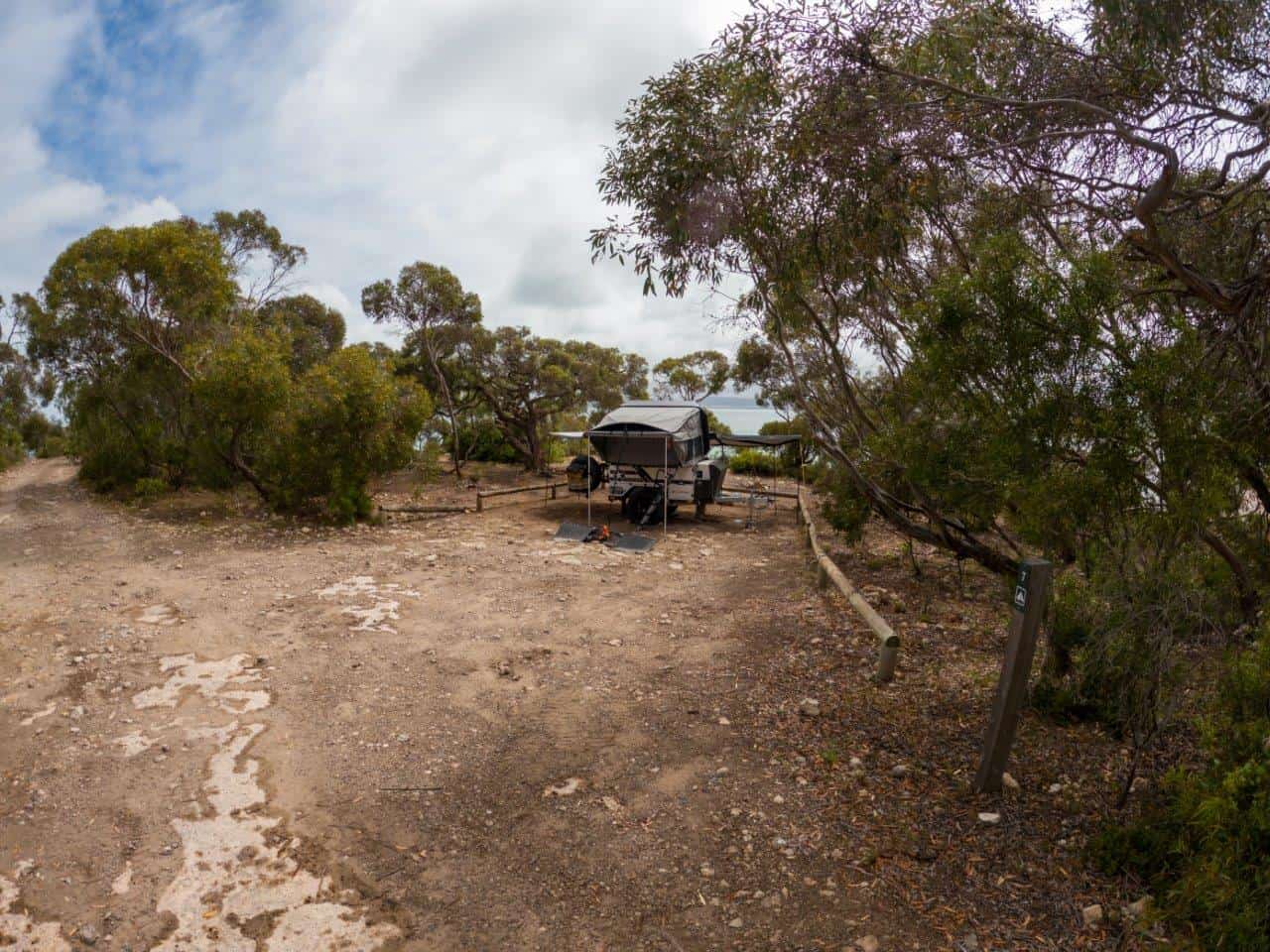 Site number 7 is great, but most of Black Springs camp sites are quite small 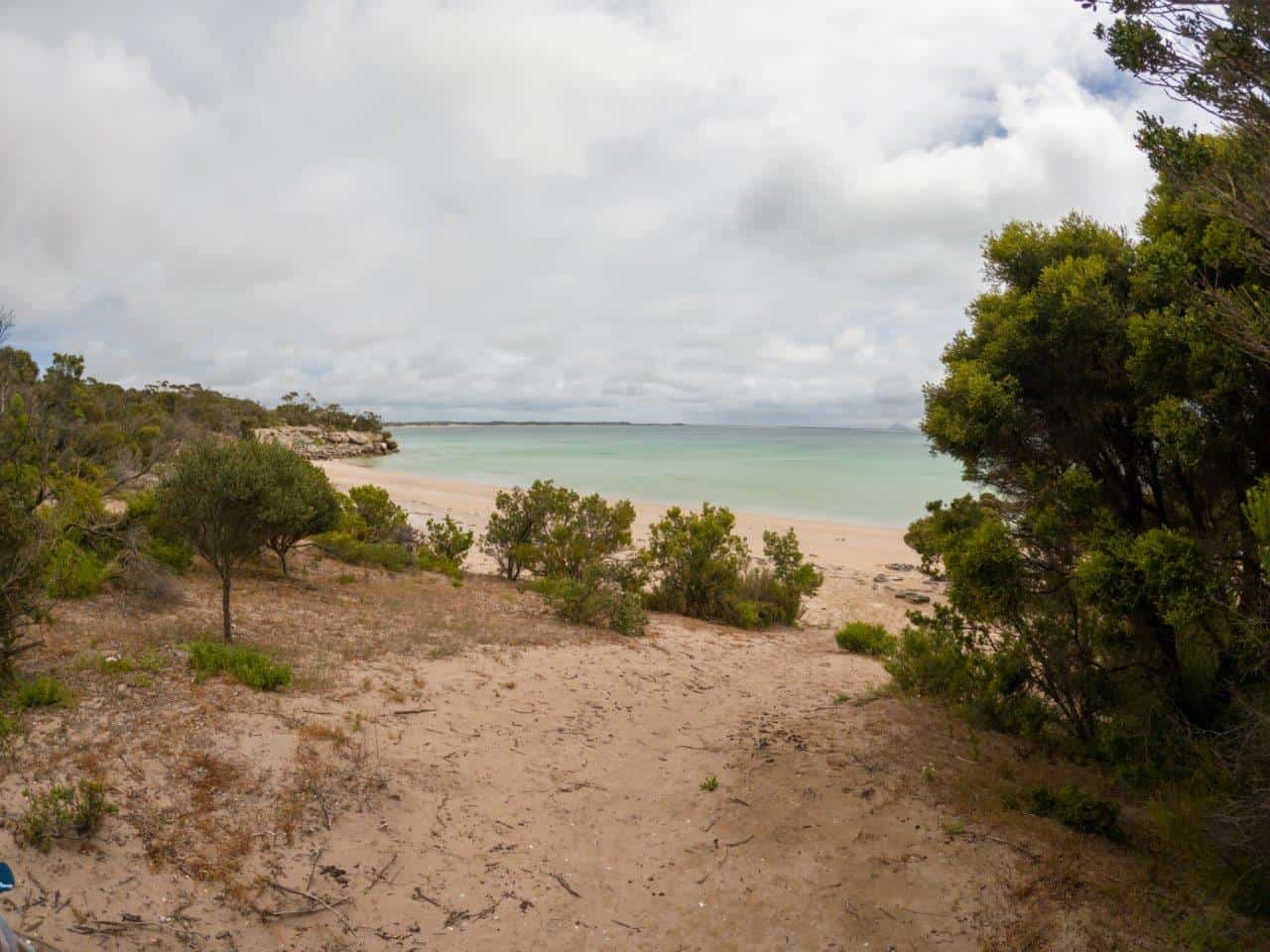 The beach at Black Springs is good, but most sites don’t overlook it

A lot of people had told us the Black Springs overflow was better, and we had to agree. It’s cheaper, and you can camp right on the edge of the water with some access down. The downside is that its unallocated, which means although you book it, someone else might take the spot you want.

The overflow has about 5 spots really close to the water, with some others further back (or up a hill), but its certainly the more picturesque spot. The beach at Black Springs is nicer though, so pick your poison; you really can’t go too wrong. 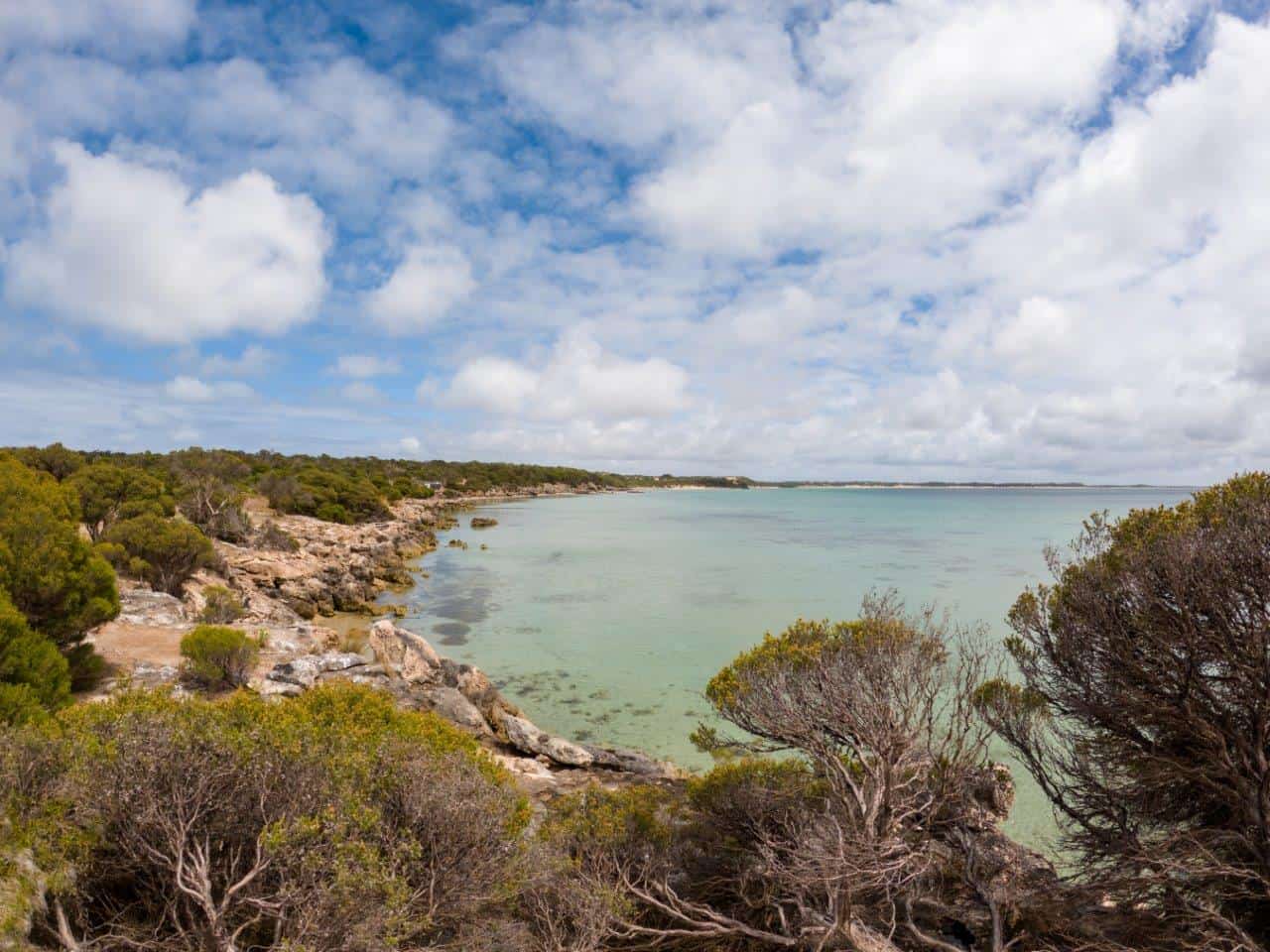 Looking down the coast along the Black Springs Overflow camps

Please know if you are camping in the overflow though, there is no toilet and that means you either bring your own (which we often prefer anyway, unless the amenities are good), or you make the walk to Black Springs and use their toilet. 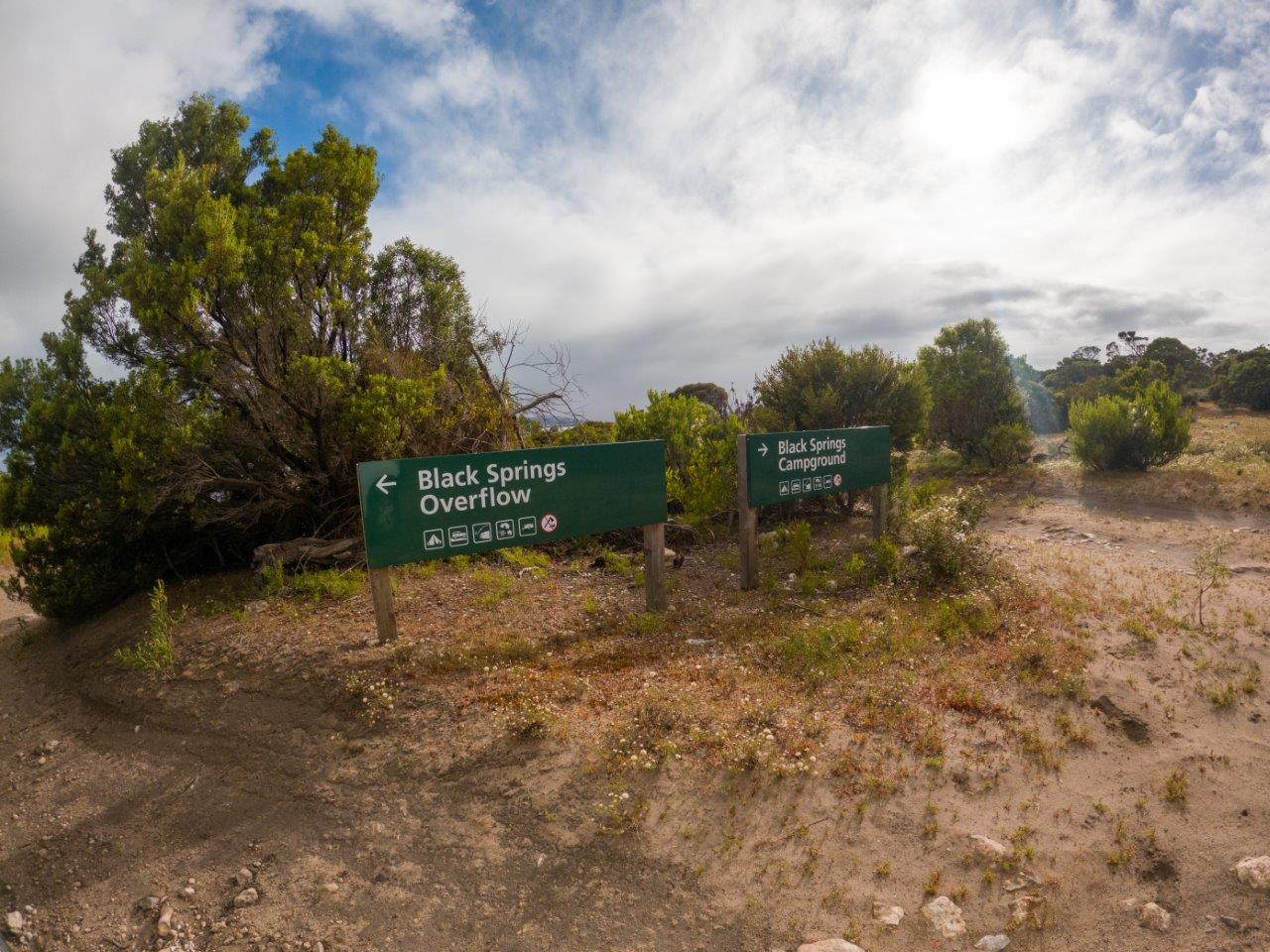 We’d go to the overflow again; its nicer overall

What does the camping cost?

Black Springs Campground is $20 per site with up to 7 people and 1 vehicle. The overflow is $13.50 per vehicle and up to 7 people, which makes it better value.

You need to book either site online, and the reception is great out at both sites with Telstra, so you could book it upon arrival if you so desired. 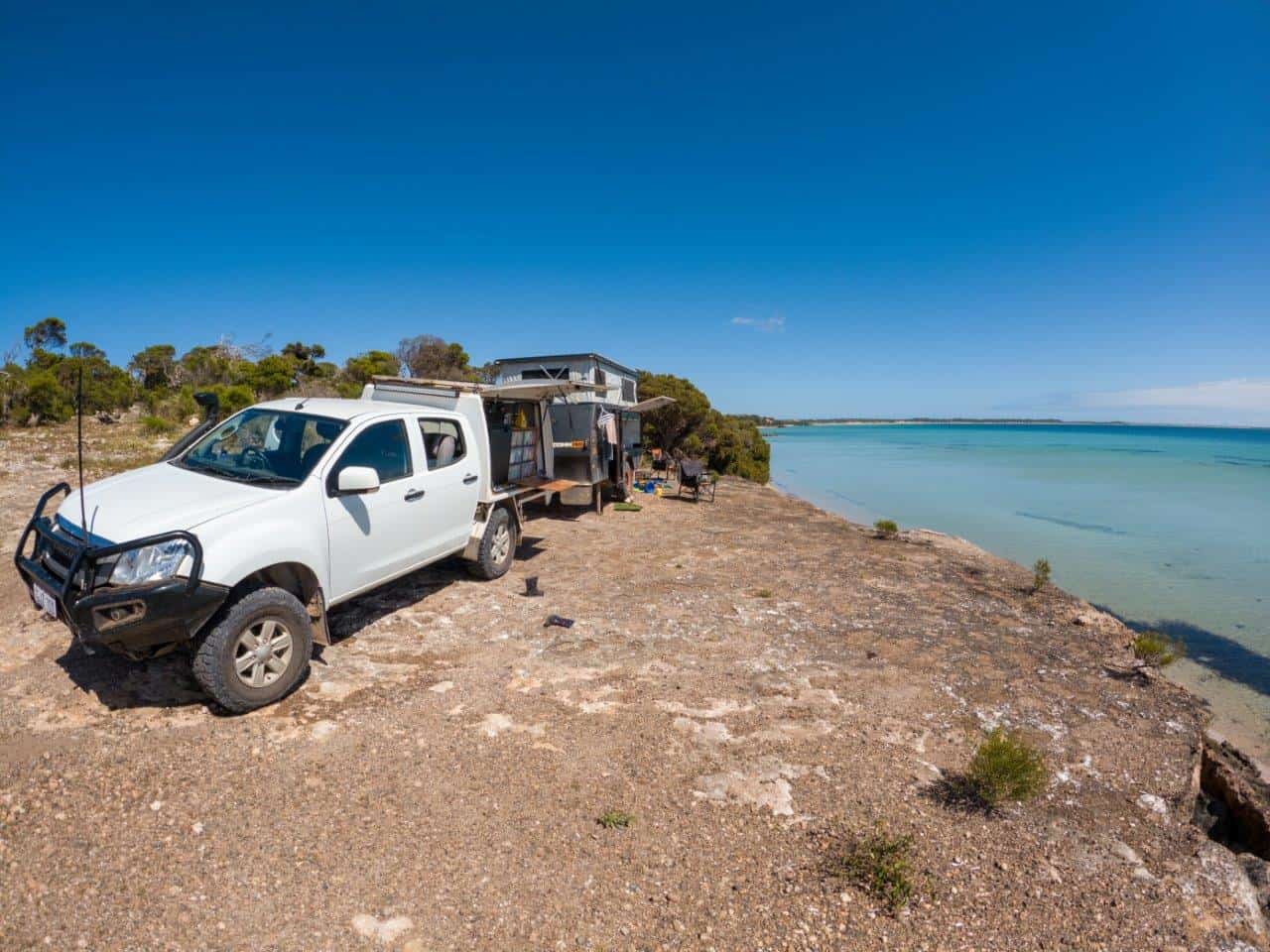 Black Springs Overflow is great value, and much quieter too

Other attractions in the area

Asides from Golden Island (which is much closer to the start of the Coffin Bay National Park and is truly beautiful), you can head further out on the 4WD tracks. Seven mile beach is only about 25 minutes drive away from Black Springs, and is a beautiful, clean beach that you can drive all the way around on, with a little track taking you to Morgan’s Landing. 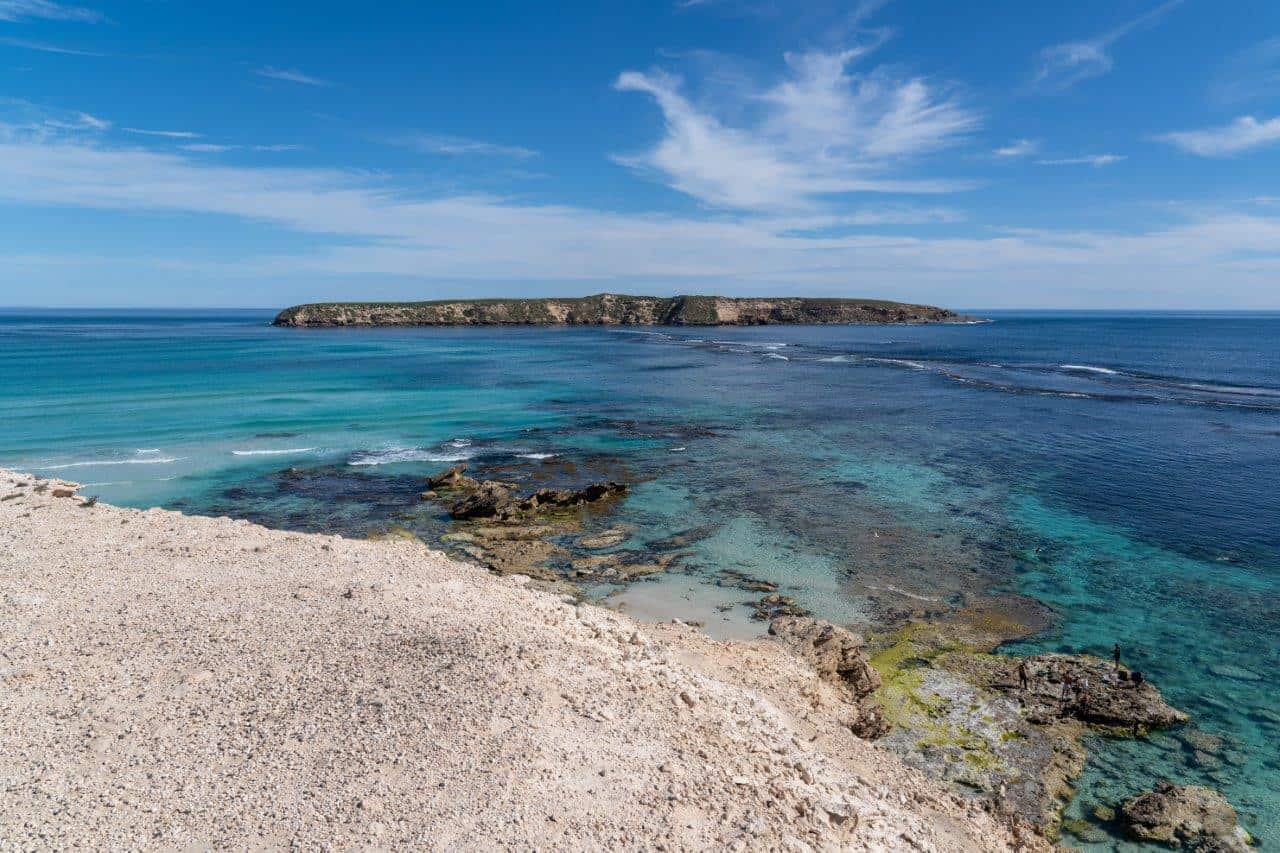 Golden Island is a magic spot, but its on the other side of the park and is a trek from Black Springs 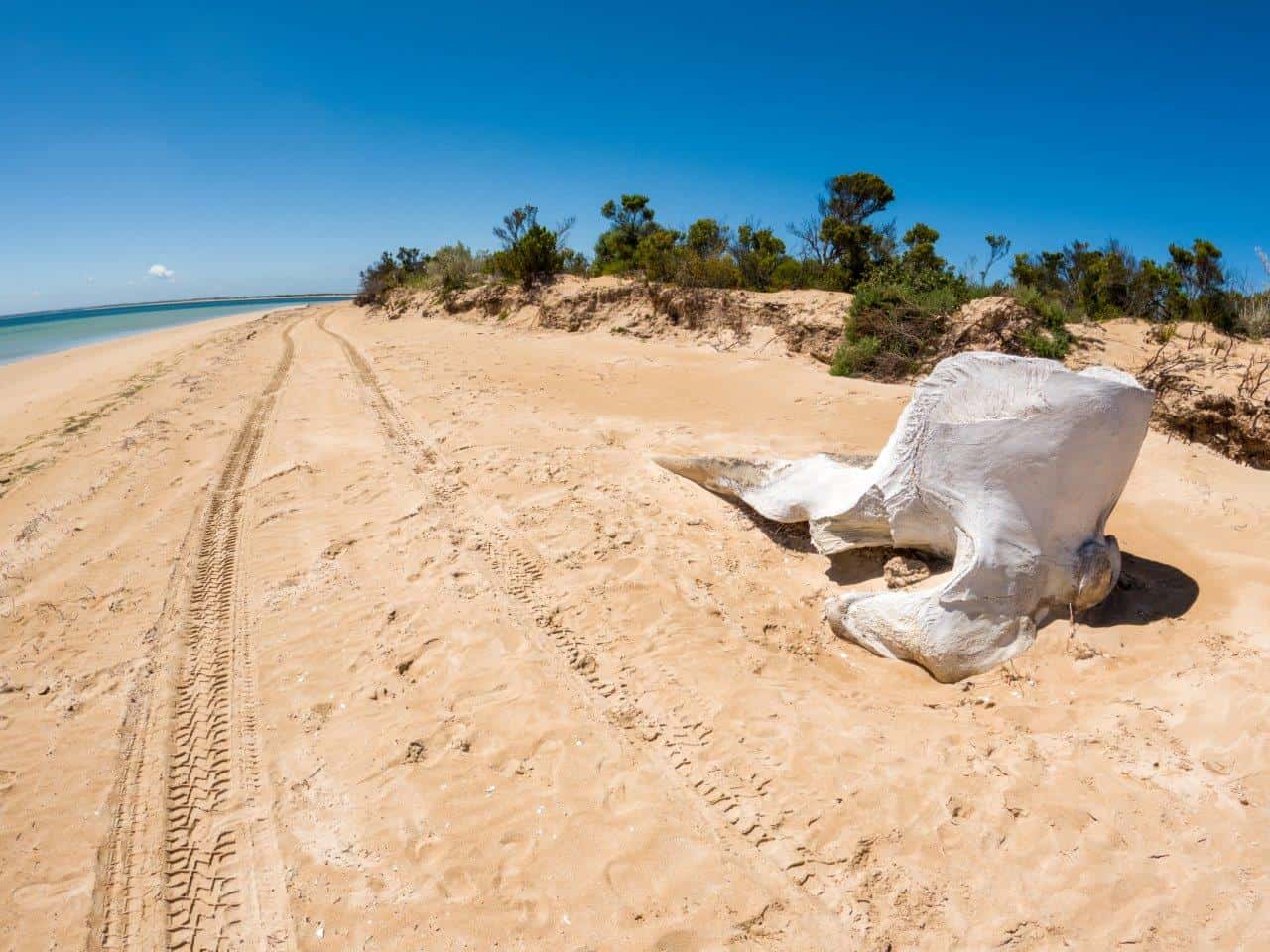 We thought the beach at Morgan’s Landing wasn’t as nice, but there’s a heap of other day use areas or camp sites in the rest of the national park. We didn’t drive any further, but you can visit Sensation Beach (and camp there), Reef Point, Mullalong Beach and Point Sir Isaac (and camp there) if you please. 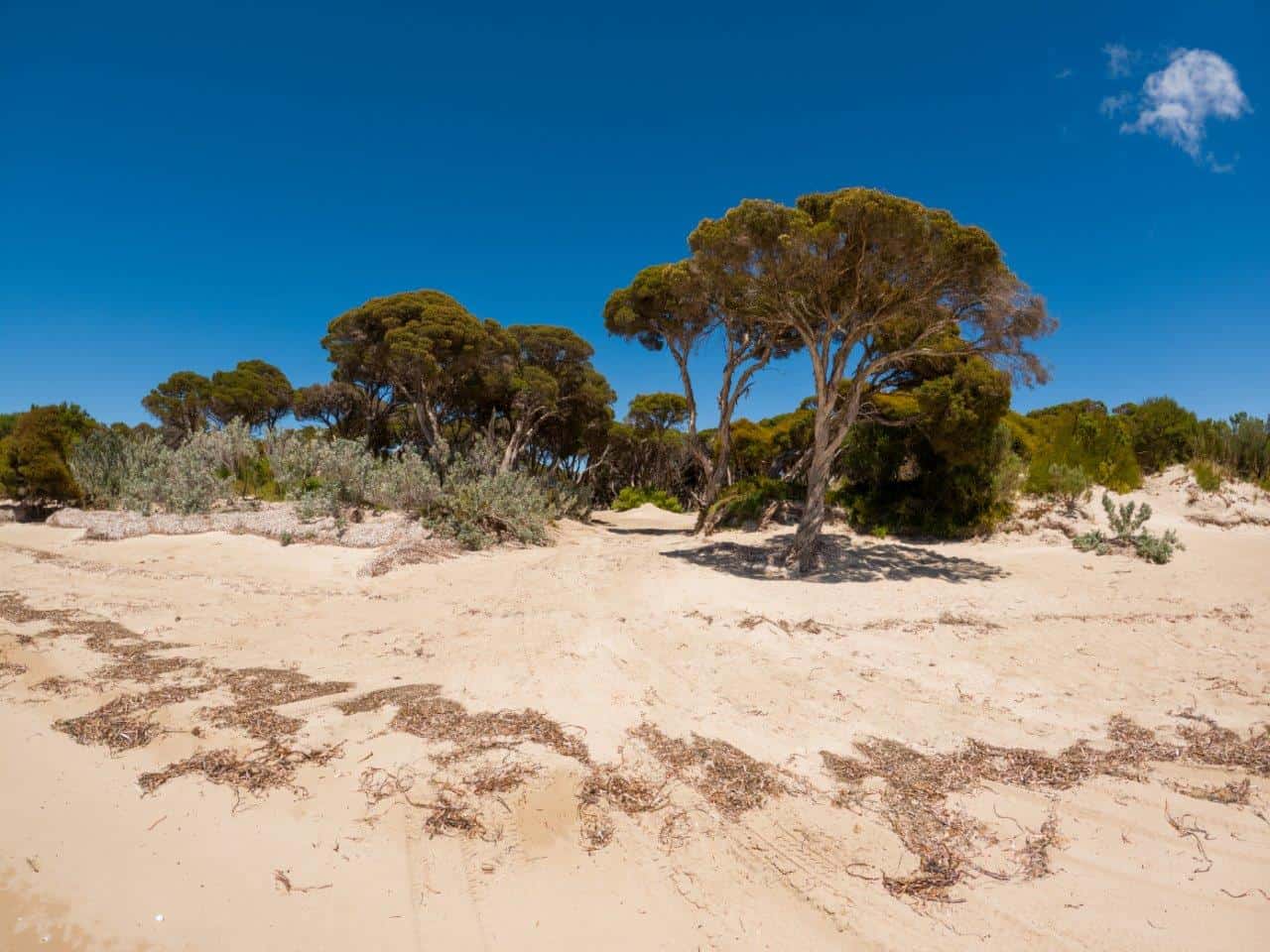 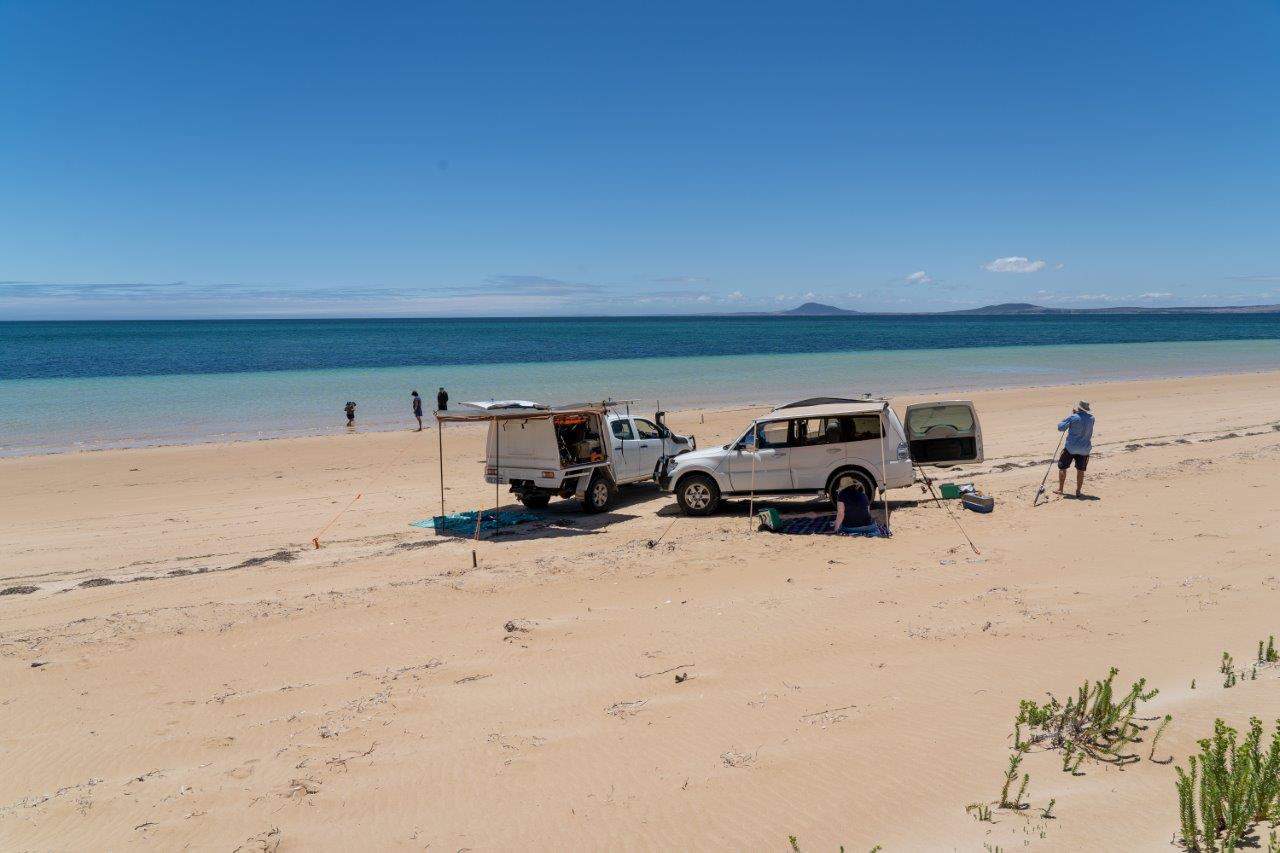 We ran out of time to get to the tip, and chose to kick back at Seven Mile Beach with the fishing rods and have a swim 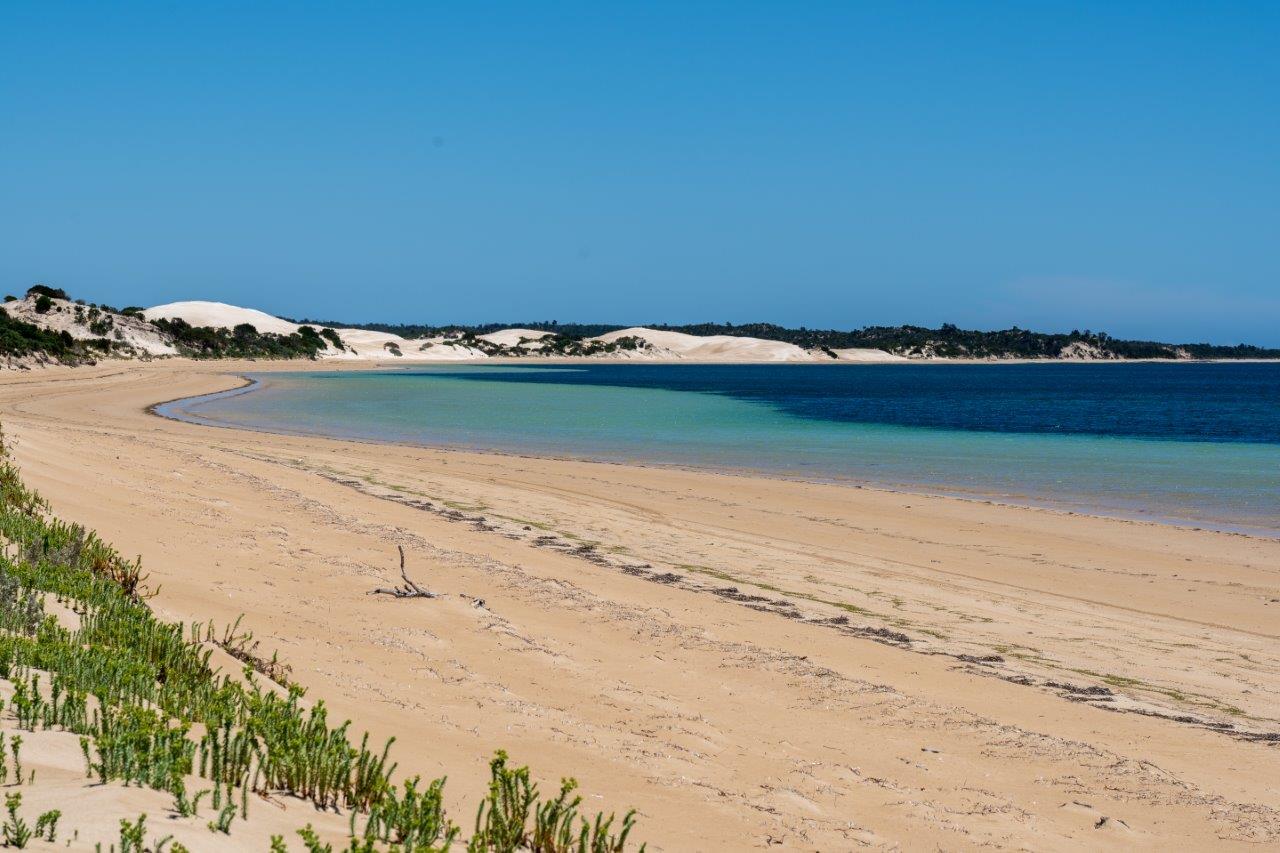 The beaches here are nothing short of spectacular 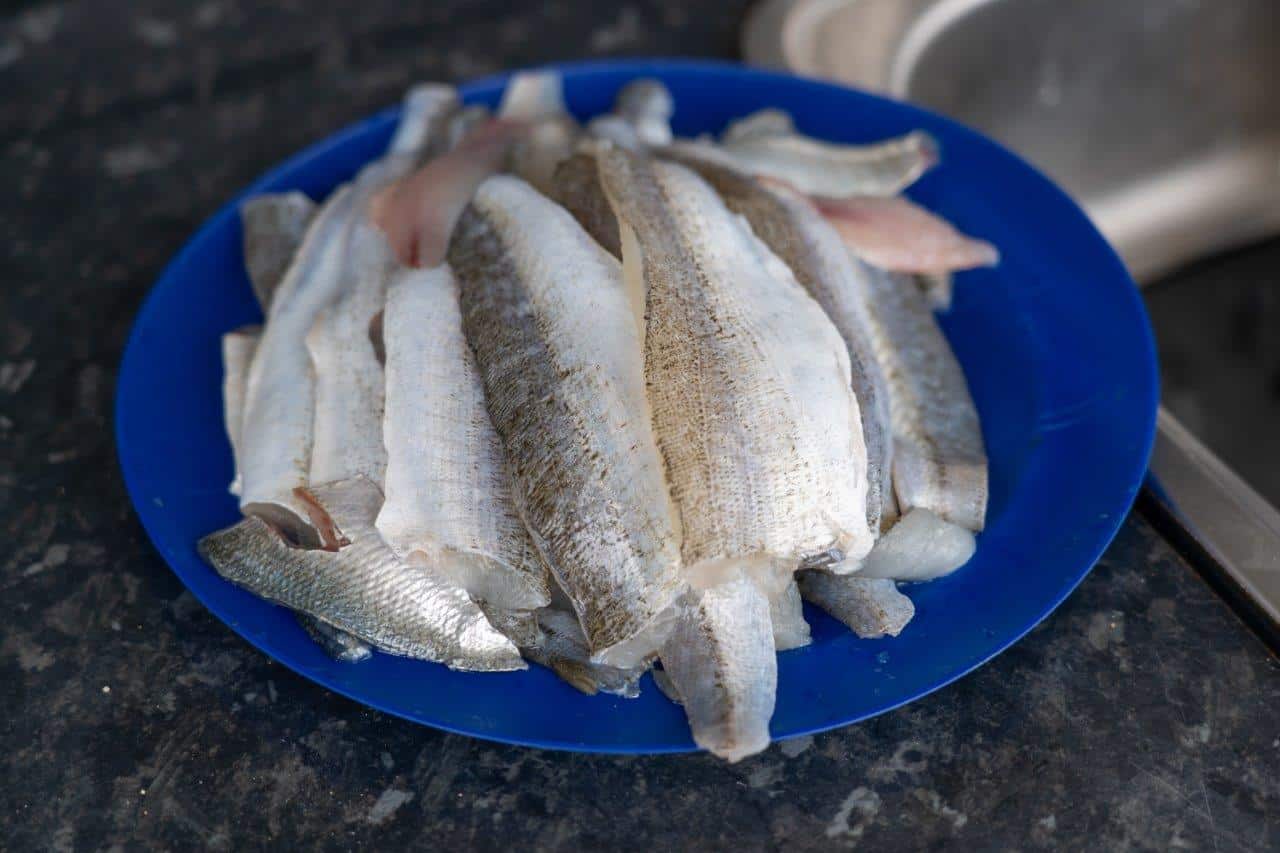 We got more than enough for a few feeds, with plenty of King George Whiting and Tommy Ruff (Herring) about