Mern Merna Station; a great start to the Flinders Ranges

The Flinders Ranges covers a ridiculously large area, and after leaving the Eyre Peninsula I was keen to see what it was actually like. Having come from WA, every single name and place is unfamiliar, and I kind of enjoy the fact that I have no idea of what to expect.

The Flinders Ranges have a massive reputation, and Sarah had scheduled out some 3 weeks to explore a big chunk of it, starting with Mern Merna Station. 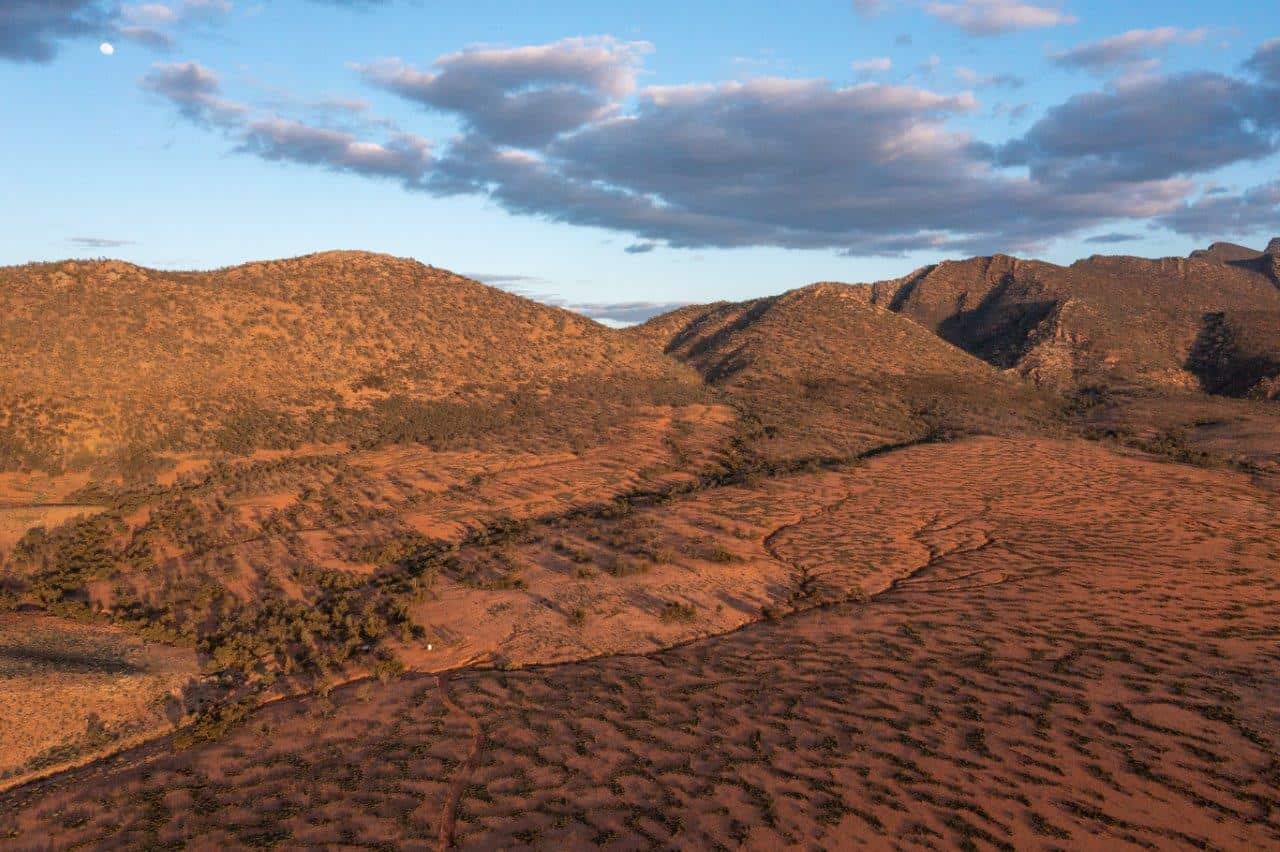 The ranges at Sunset, on Mern Merna Station

Where is Mern Merna Station?

You’ll find this station not far from Mt Little station, roughly 20 minutes’ drive north of Hawker. I noticed a huge change in the Flinders Ranges as we continued north, and Mern Merna Station looked far more like what I was expecting the Flinders Ranges to look like than the earlier parts did. 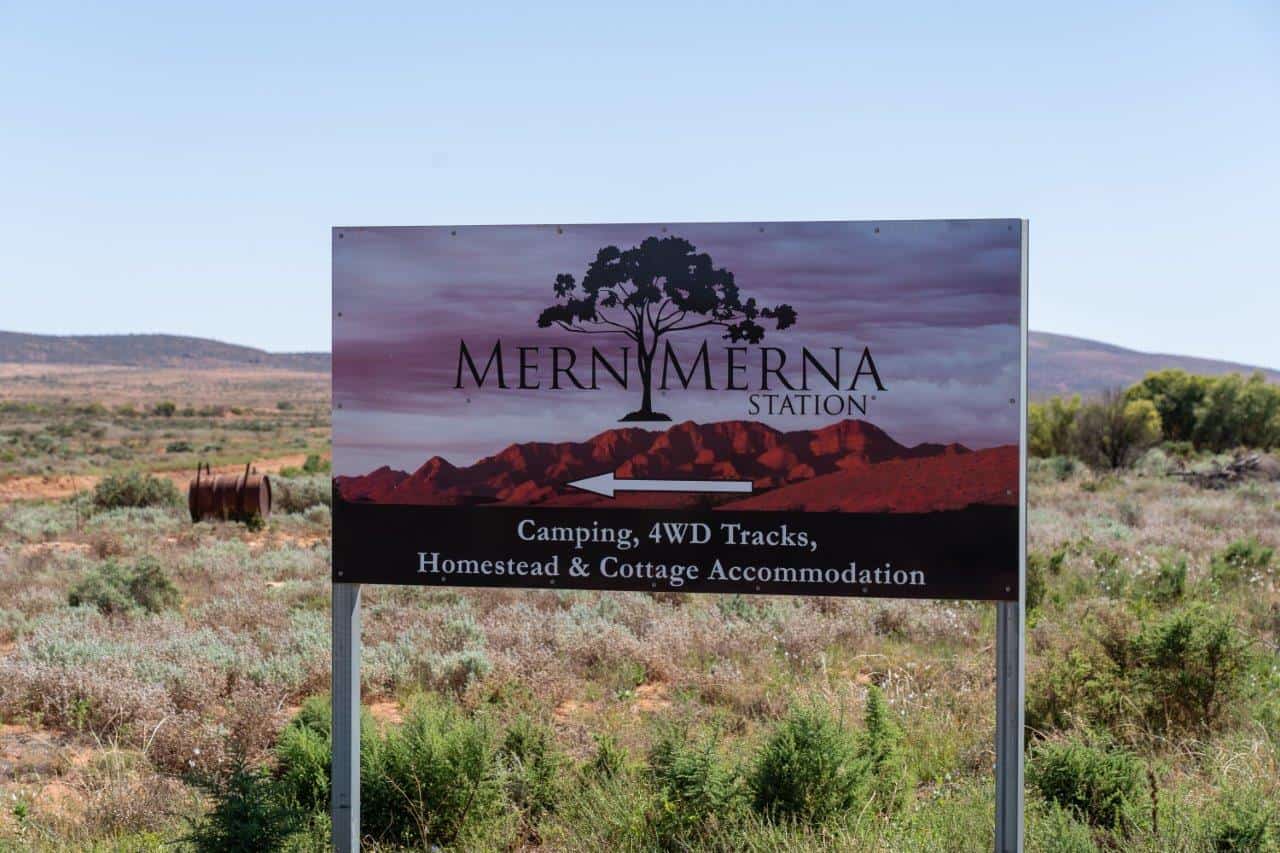 This is a working station that offers accommodation, powered camping and unpowered, bush camping. We didn’t spend much time at the homestead itself, asides from paying and patting the friendly dogs. 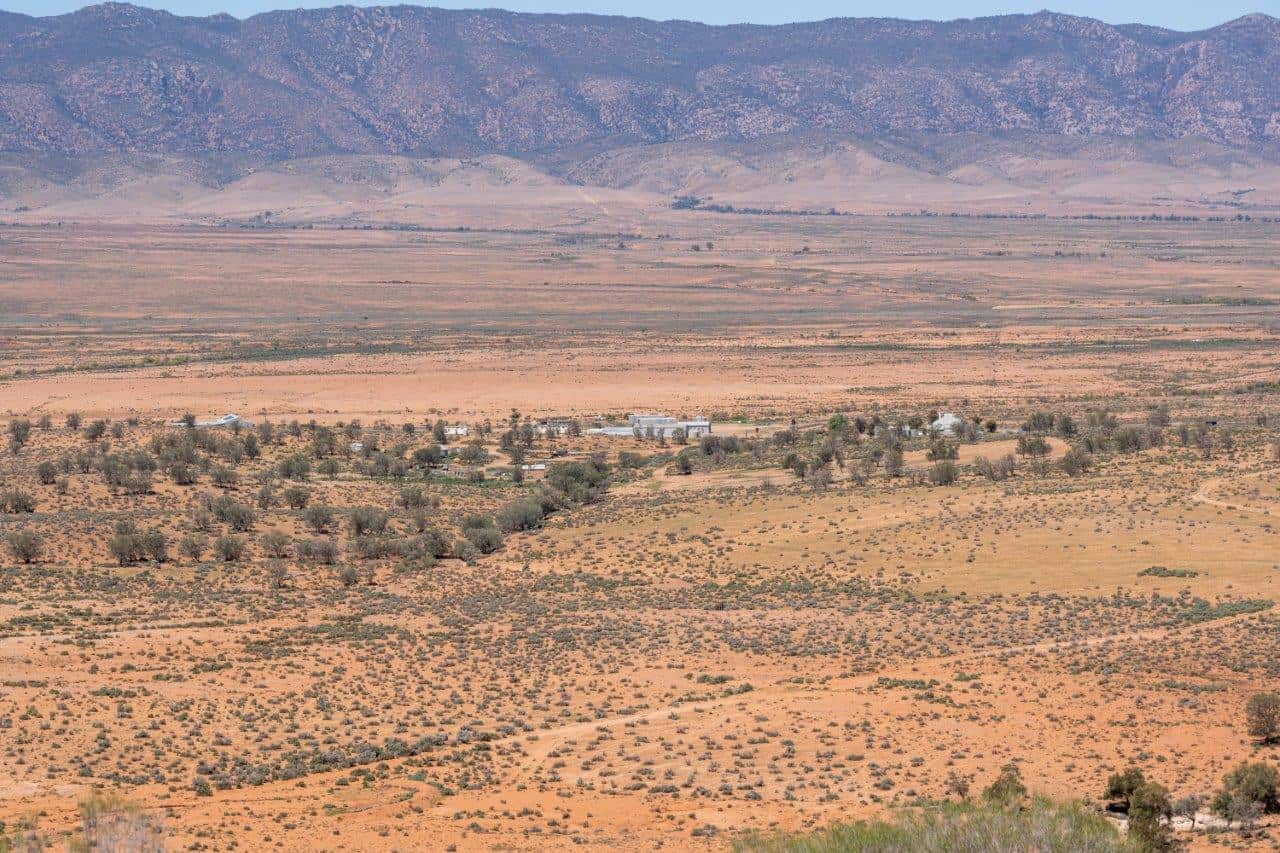 Mern Merna has a number of camp sites that are booked out exclusively to one group each. If you book a spot, that’s your spot and yours alone, which is pretty awesome. The 4 spots at The Valley, The Ledge, The Hideaway and the Ochre

Each site has some firewood provided, and a toilet on a trailer that is kept immaculately clean.

Come sunset, expect a show of the outback; it really lights up and becomes a special place! 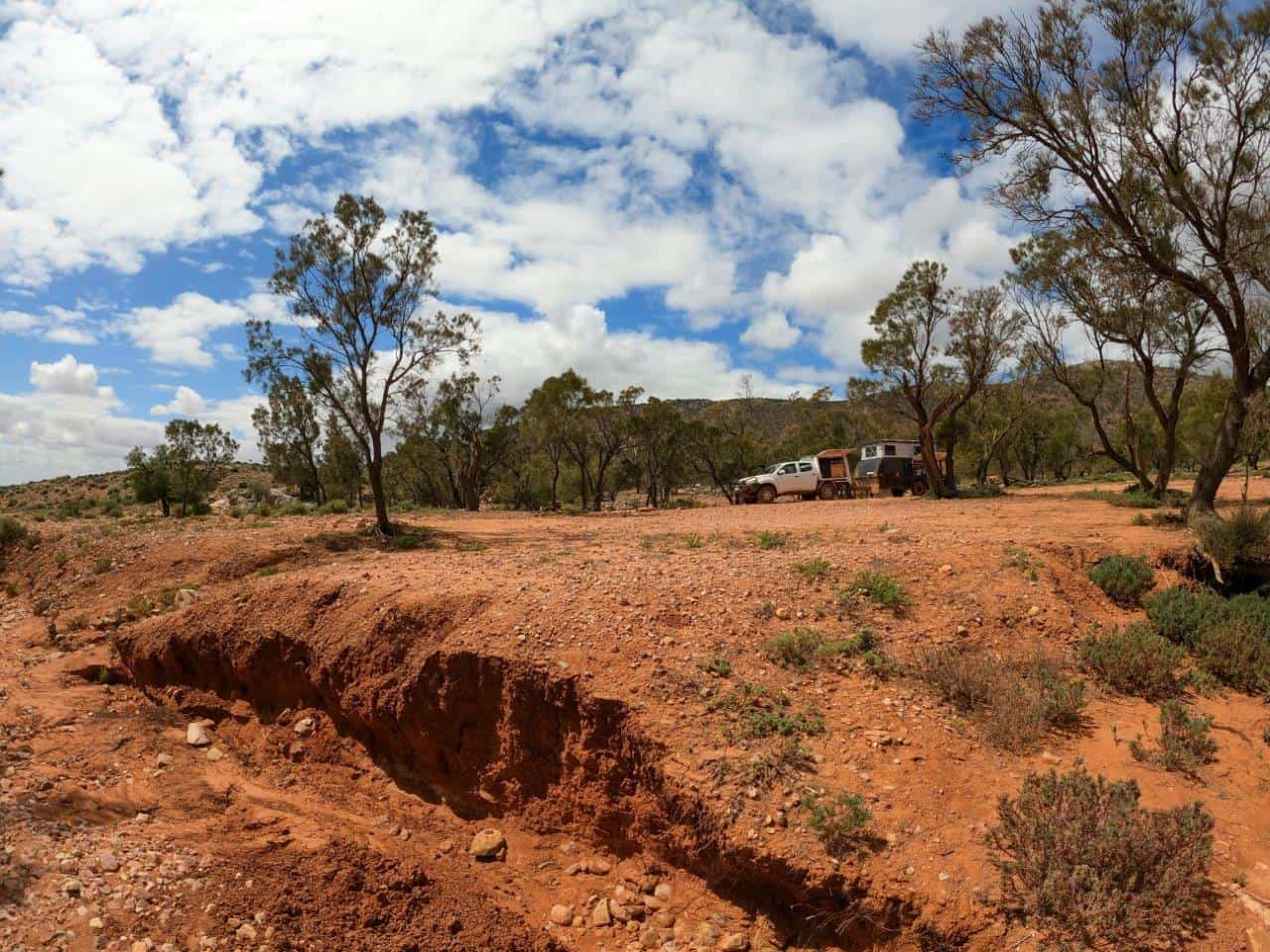 Our camp site at the Valley, looking from the area that the kids called their ‘mine site’ 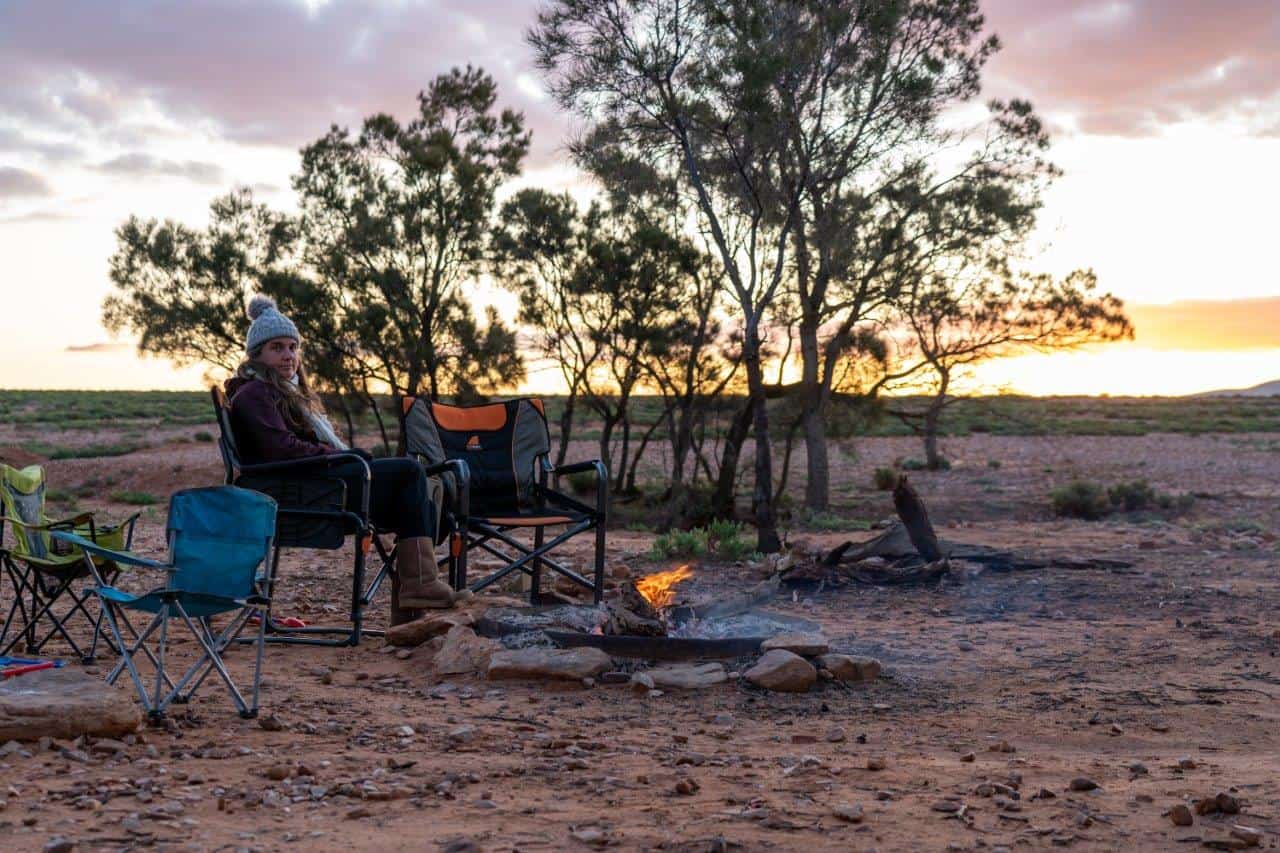 We looked forward to sunset each day, when the colours come alive and the flies go away

If you want to do something different (although there are lots of 4WD tracks in the Flinders Ranges), you can do the Burnette 4WD track, which starts just behind the homestead at Mern Merna. This takes 2 – 3 hours, depending on how often you stop, and how quickly you drive.

It’s rocky, needs to be done in low range and is one way only. We’ve got a comprehensive post covering this that will be out shortly, but we had a heap of fun and would absolutely do it again. 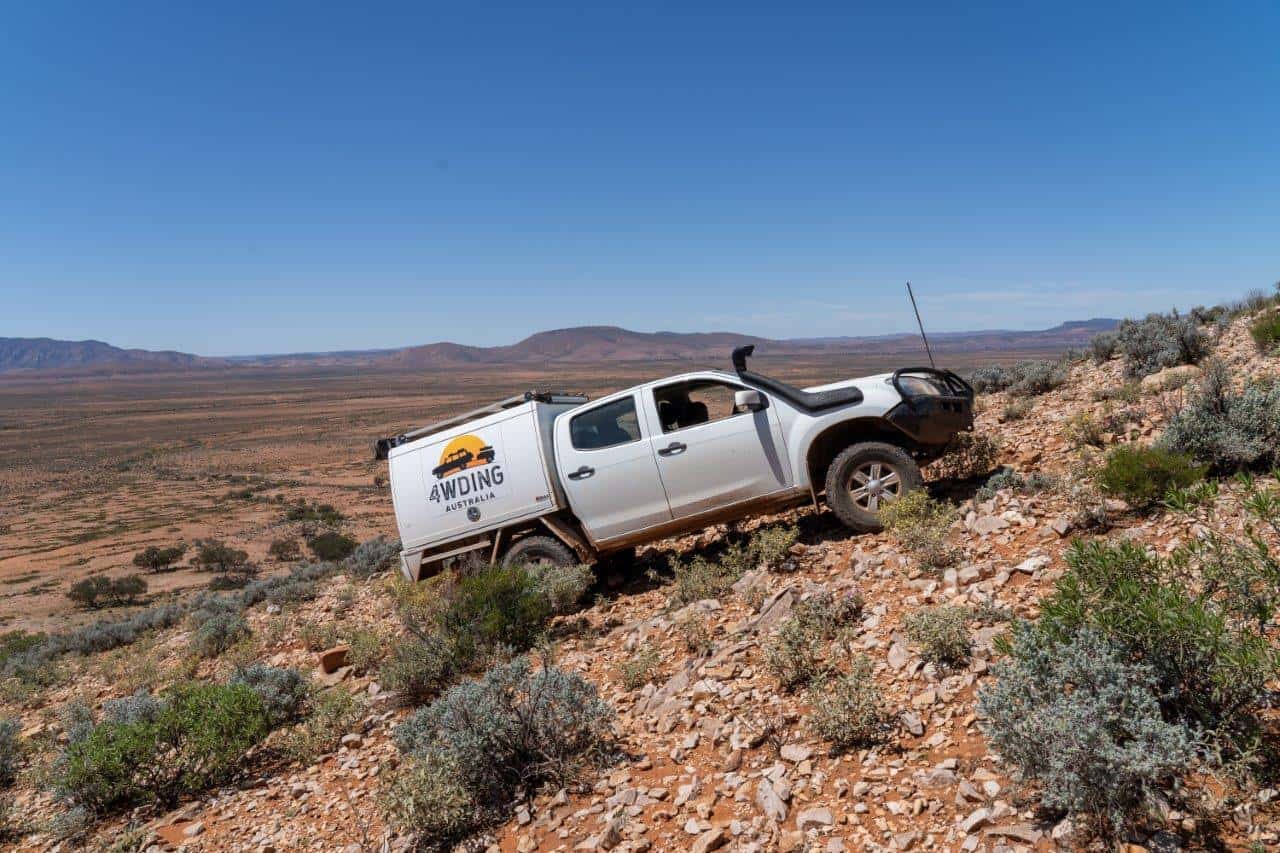 Climbing the ranges in our 4WD 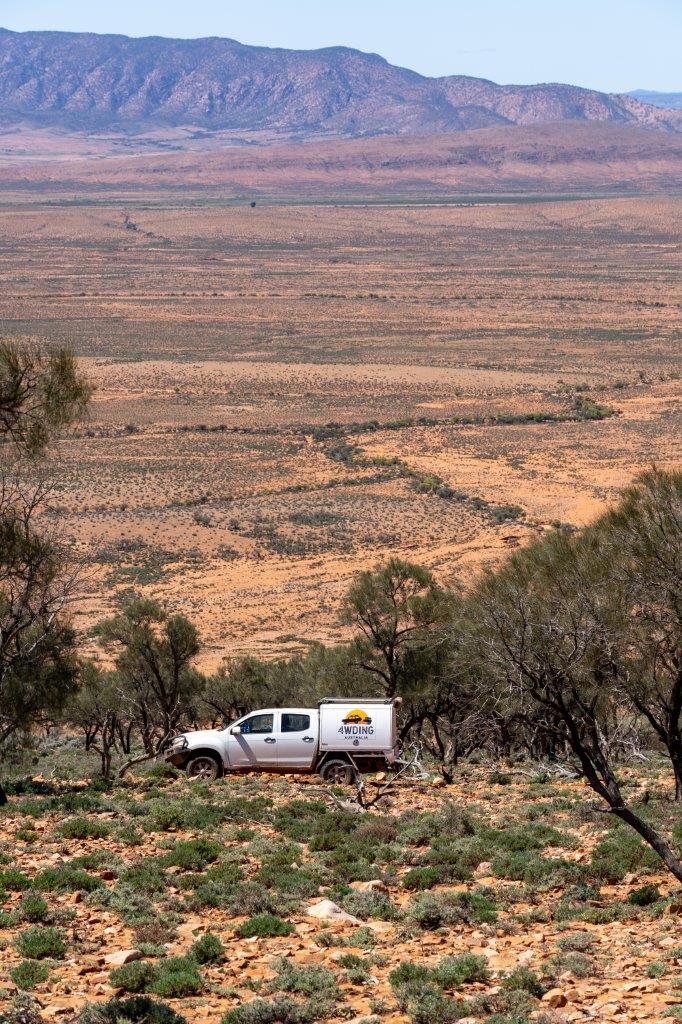 The views at the top are staggering

What does it cost to camp and 4WD at Mern Merna?

Unpowered sites are $30 per night per vehicle, with the 4WD track costing another $30. It’s not dirt cheap, but with some firewood provided (and you can pay more for half a trailer load), great privacy and an awesome area, it’s probably pretty fair. The 4WD track would cost a bit to maintain (plus insurance etc), and I don’t really see an issue with them charging for it.

There are some other attractions you can visit by 4WD that don’t cost anything, but the signage makes it a bit hard to find some of them, so go on an adventure! 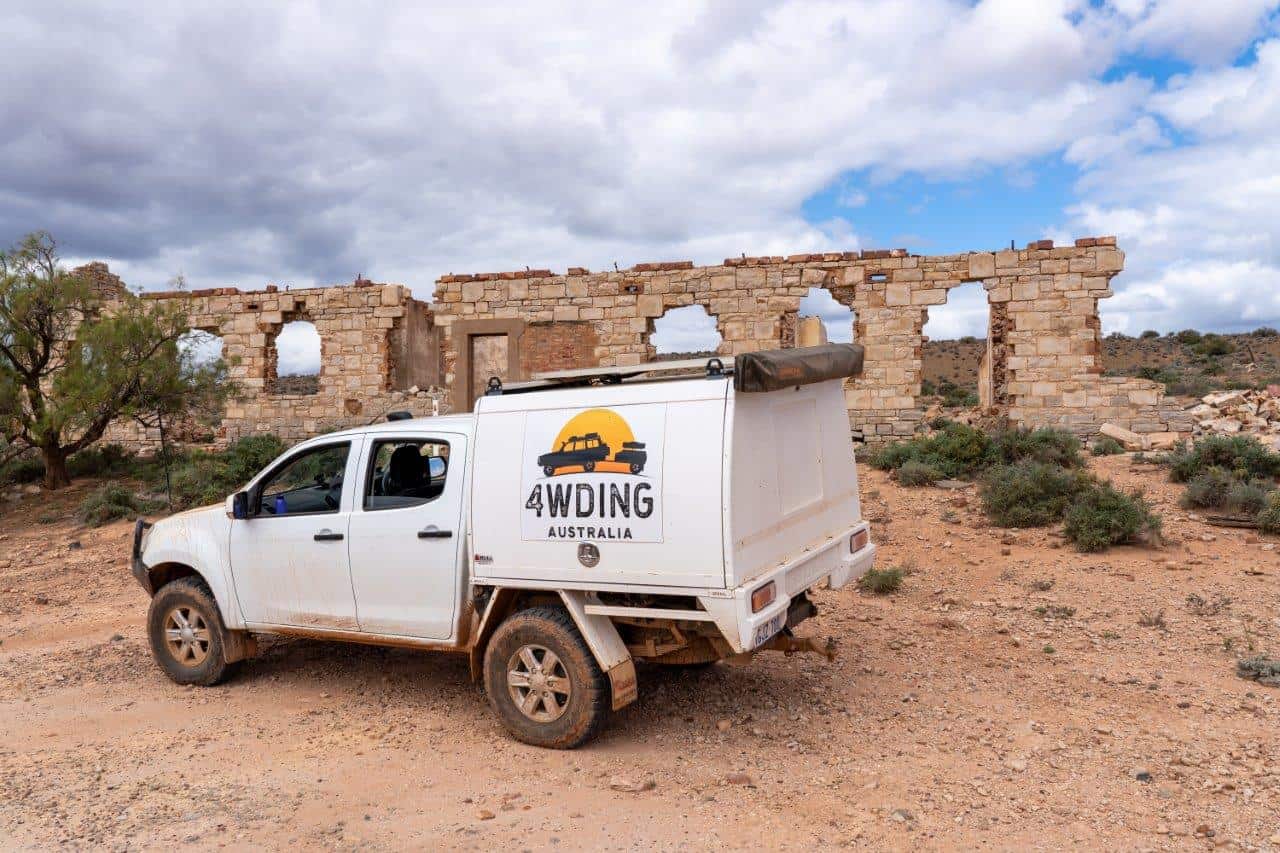 What did we think of it?

I always try to be as honest as I possibly can here. I don’t want to rubbish a place, and I certainly don’t want to have people visit somewhere on my opinion and leave disappointed either. I will admit I went through a few different emotions at Mern Merna, which is not normally what happens.

Rolling up to the station was great, with a warm welcome and some very friendly dogs. Arriving at camp though, I couldn’t help but feel like there might be nicer places to stay in the area. There was nothing wrong with the camp site, but it was quite open, hot in the middle of the days and the flies were quite friendly. That said, as we drove around the property and watched our first sunset, my opinion shifted, and I felt a new kind of warmth towards the area.

This is not the first time I’ve gone through these emotions; I felt the same way about Magic Pool in the Pilbara, and still to date, might rate that as the best camp site we’ve ever been to! 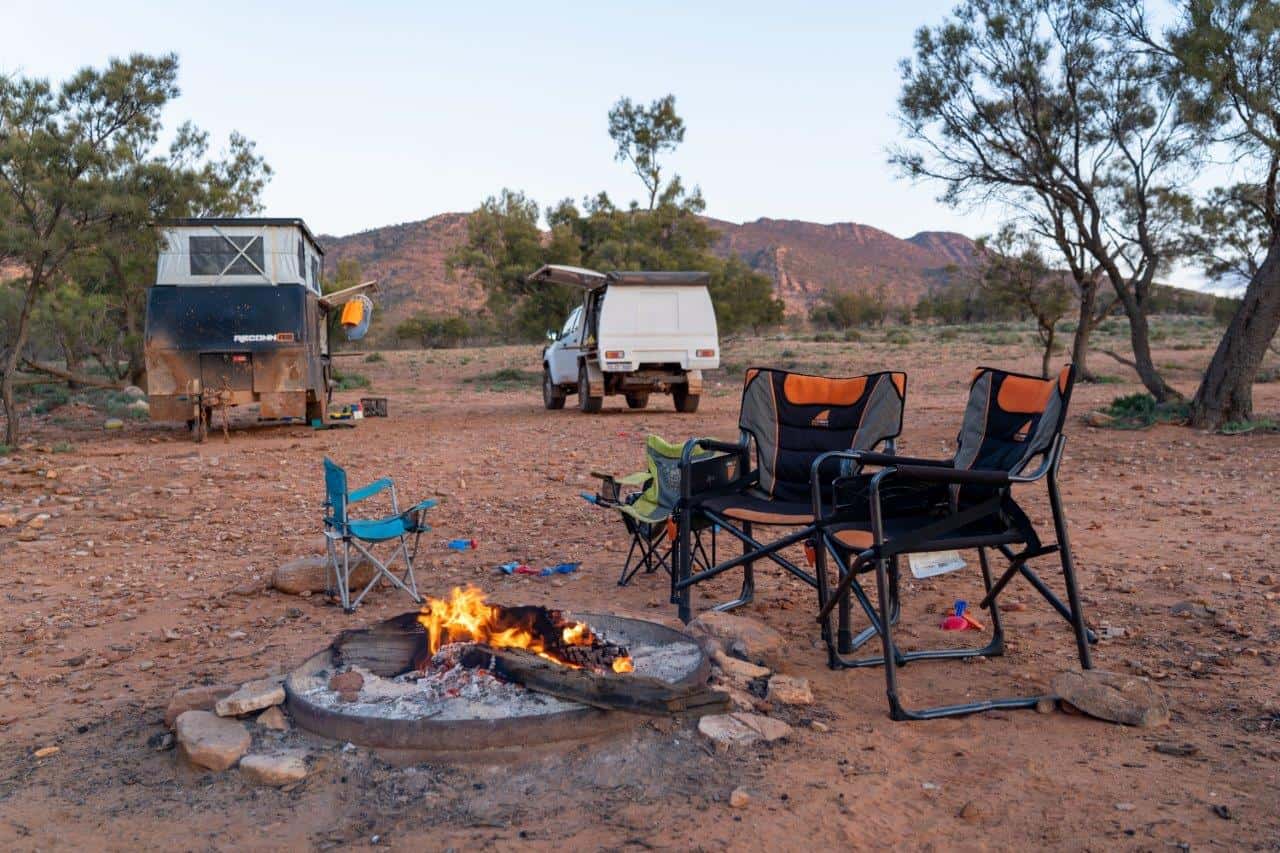 Our camp site in the Valley

Outback camping is uncommon for us (and it’s our first visit to South Australia and the Flinders Ranges), and whilst we generally prefer to camp near the coast, or near a freshwater body of water it was impossible to really appreciate the individual beauty of this place whilst the sun went down. 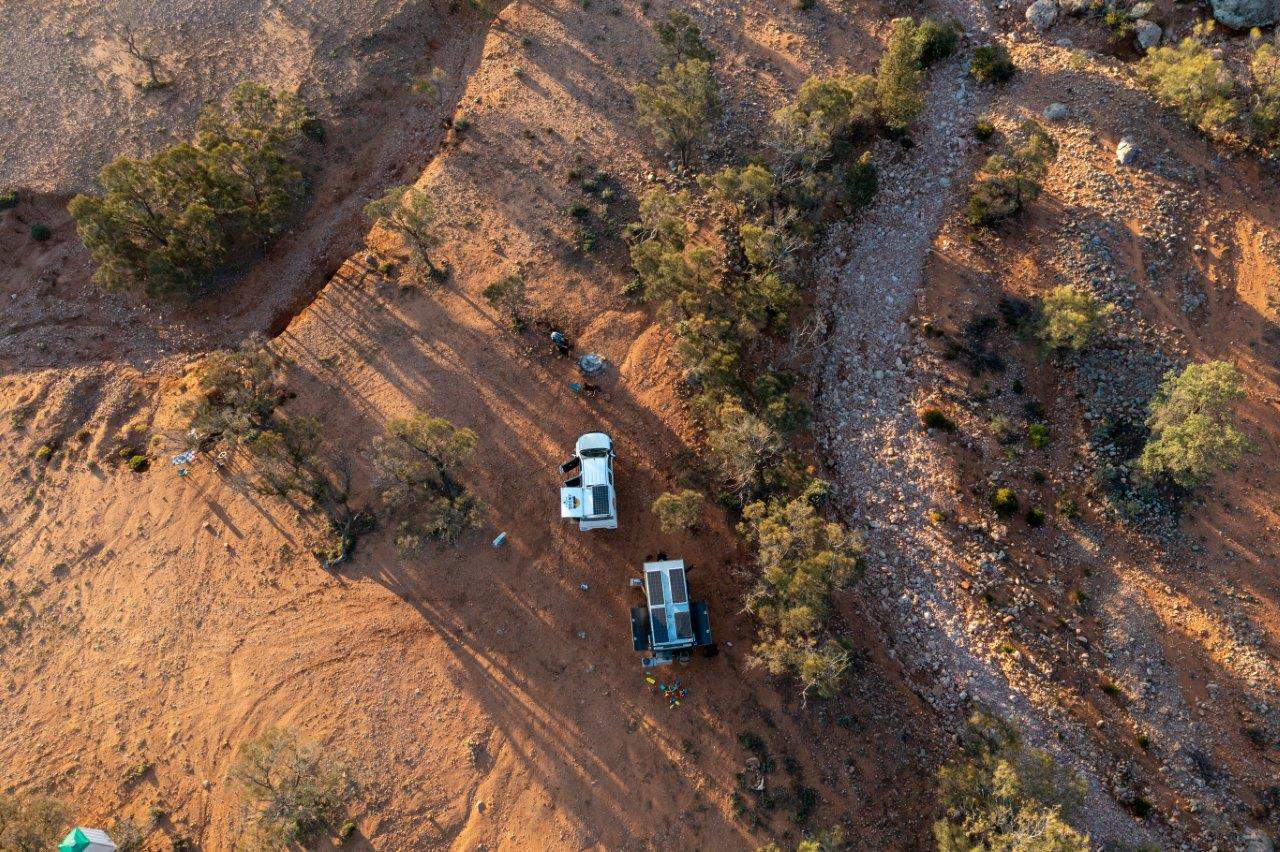 We really looked forward to the sunsets here

It really is unique in many ways, and in terms of camping in the region we had great views, plenty of room and privacy many would pay a fortune for. After doing the 4WD track the next day, I actually felt a bit sad to depart, and really started to fall in love with the Flinders Ranges. The 4WD track was a huge highlight for me, and we’d thoroughly recommend it. 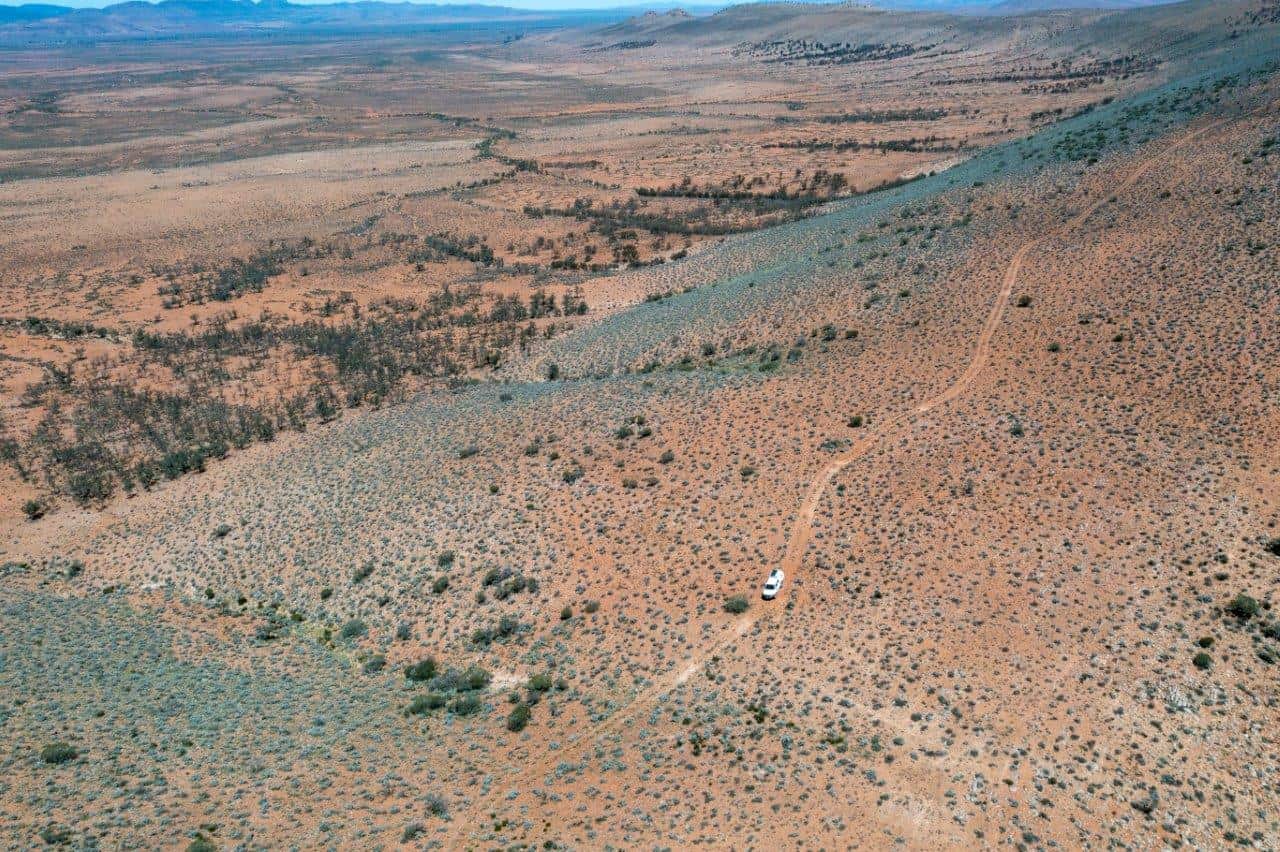 Mern Merna is an amazing part of the world run by a lovely couple. I will admit to feeling bad later on about my initial thoughts of the campsite, but I want to be completely up front and honest. This part of the Flinders Ranges is absolutely drier, and has less shade than other areas, making the middle of the day fairly warm and limiting in what you want to do, but that shouldn’t detract from the fact that its a beautiful part of the world.

Sarah liked the place from the moment we arrived (and the kids rated it as our best camp site so far this trip), so maybe it’s got something to do with my expectations, and that I was anticipating something else. Either way, I can firmly say as we leave that it’s a ripper spot.

If you are calling through the Flinders Ranges, Mern Merna Station is worth a stay! 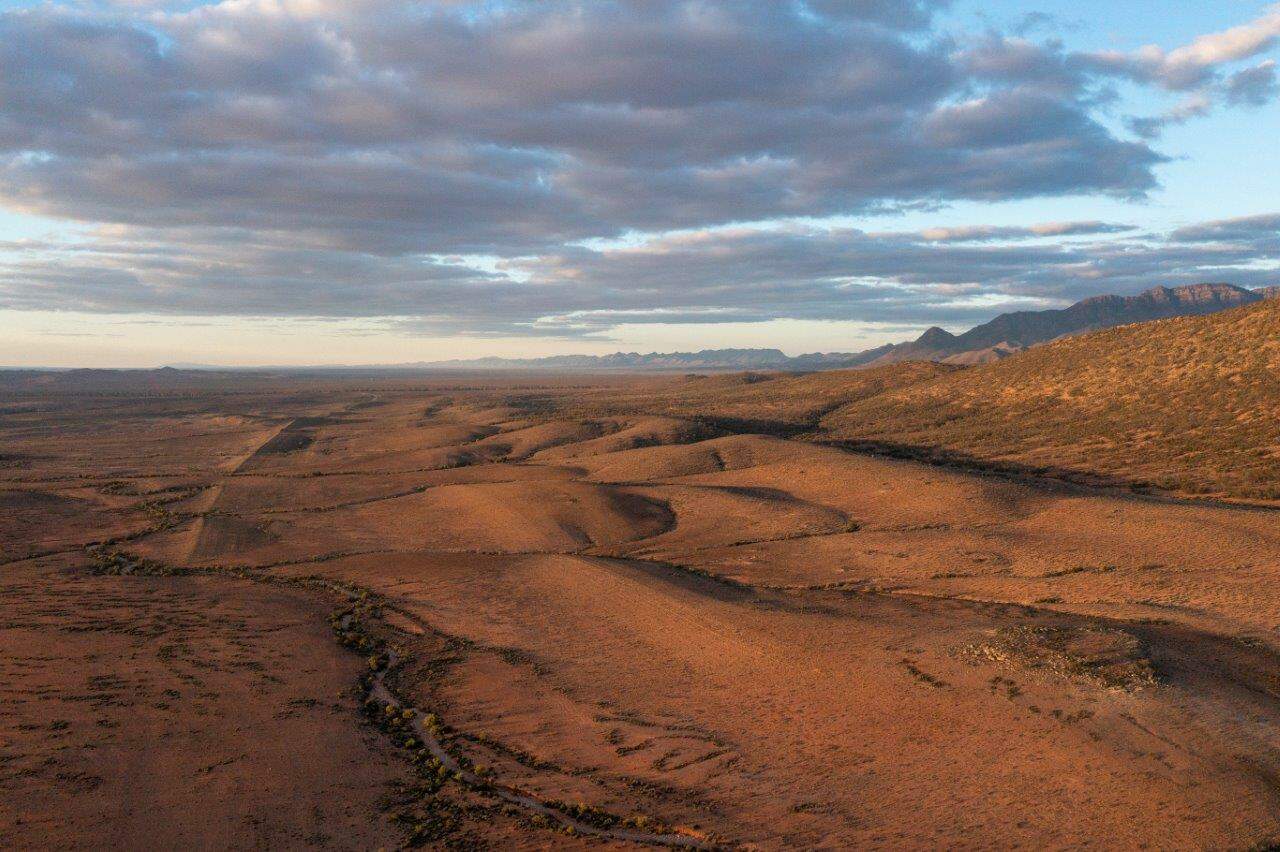 We’d come back; its a great place to check out