The Innes National Park at the bottom of the Yorke Peninsula is a truly incredible place, and we were super excited to spend a number of days exploring everything, and checking out the different camp grounds. After two awesome nights at Gym Beach (the northern most spot in the Innes National Park), we moved down to Pondalowie Beach Camp Ground for 3 nights as a base to explore the rest of the park. 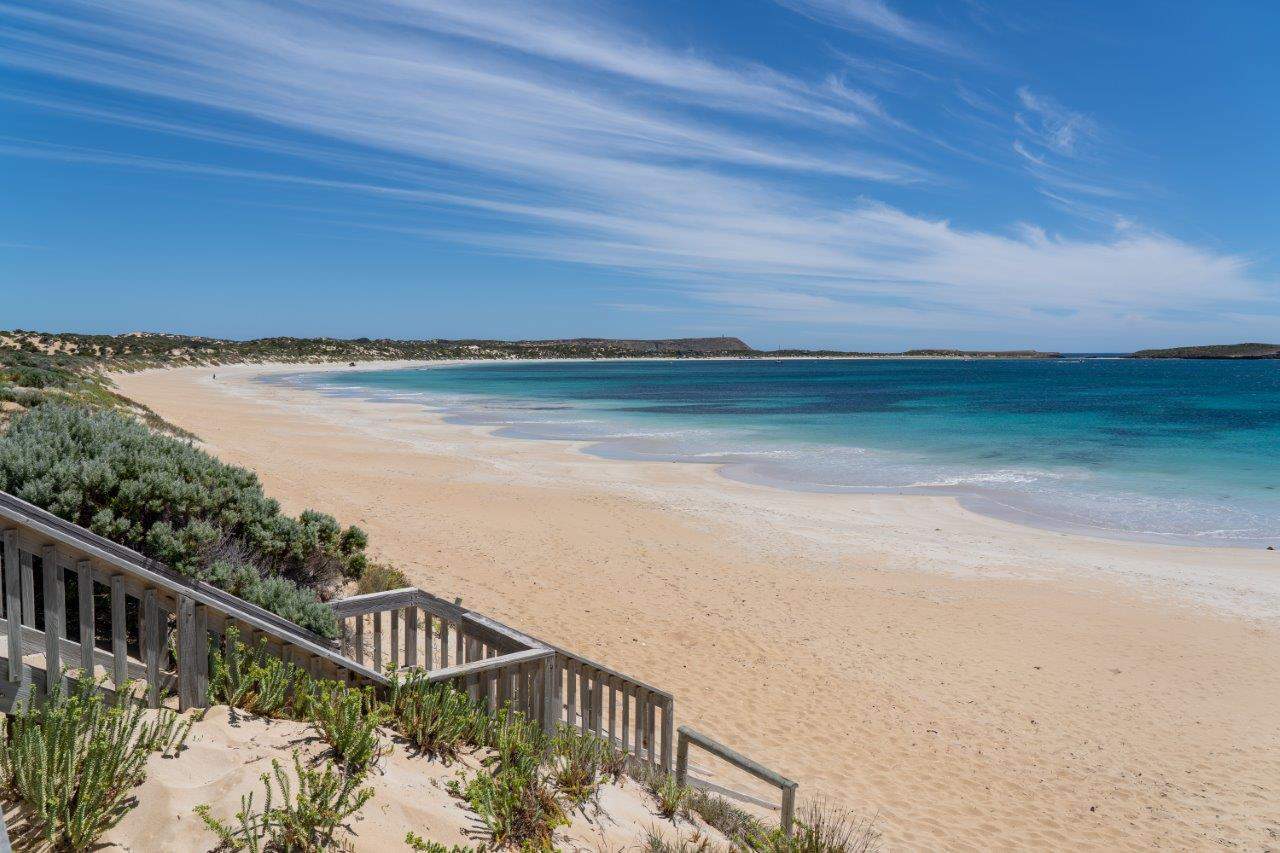 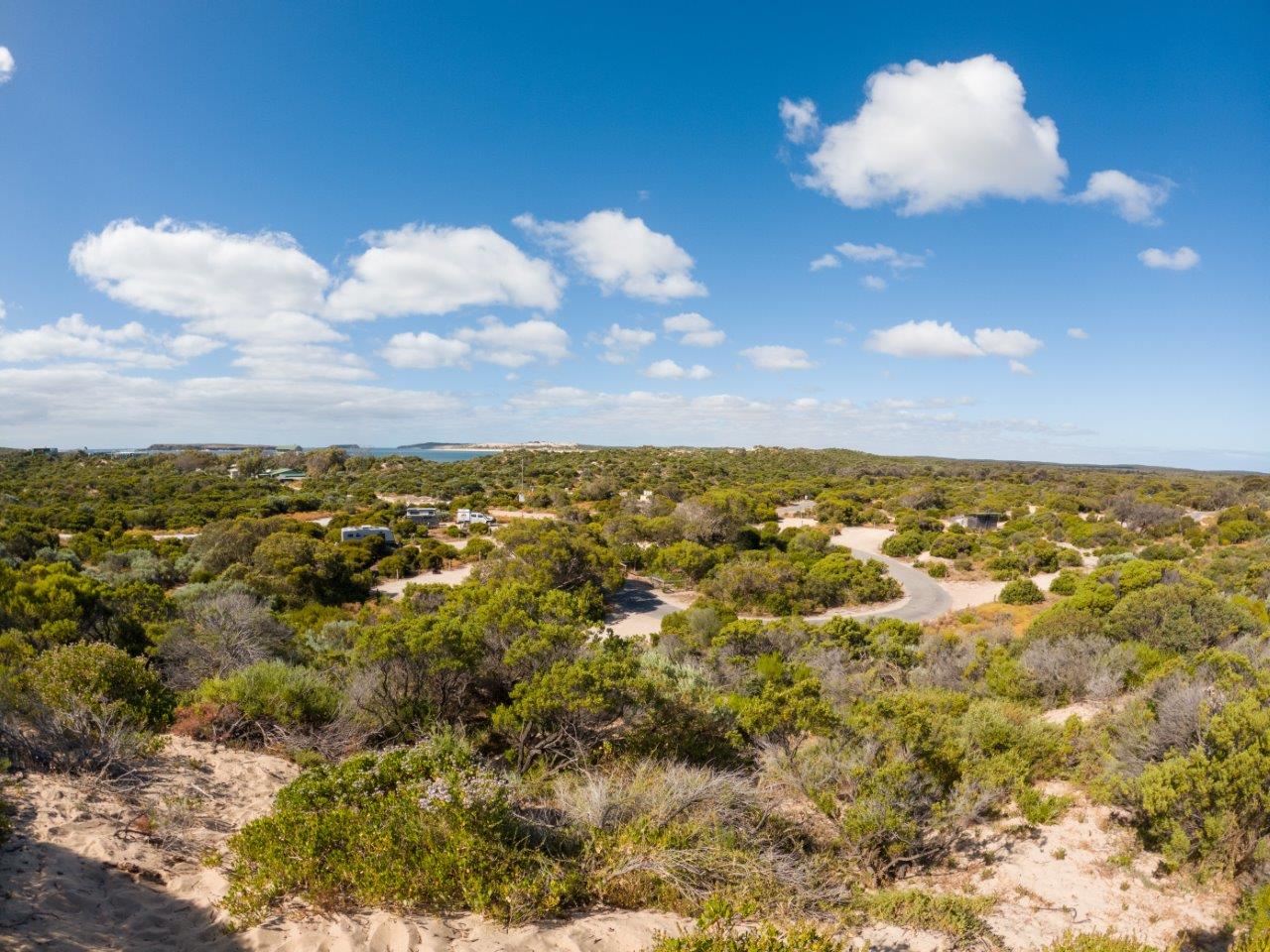 The trailer and Caravan part of Pondalowie Bay Campground

You’ll find this place roughly in the middle of the Innes National Park. It’s a relatively short drive to the top, and back down to Marion Bay, and is located close to plenty of other attractions nearby. 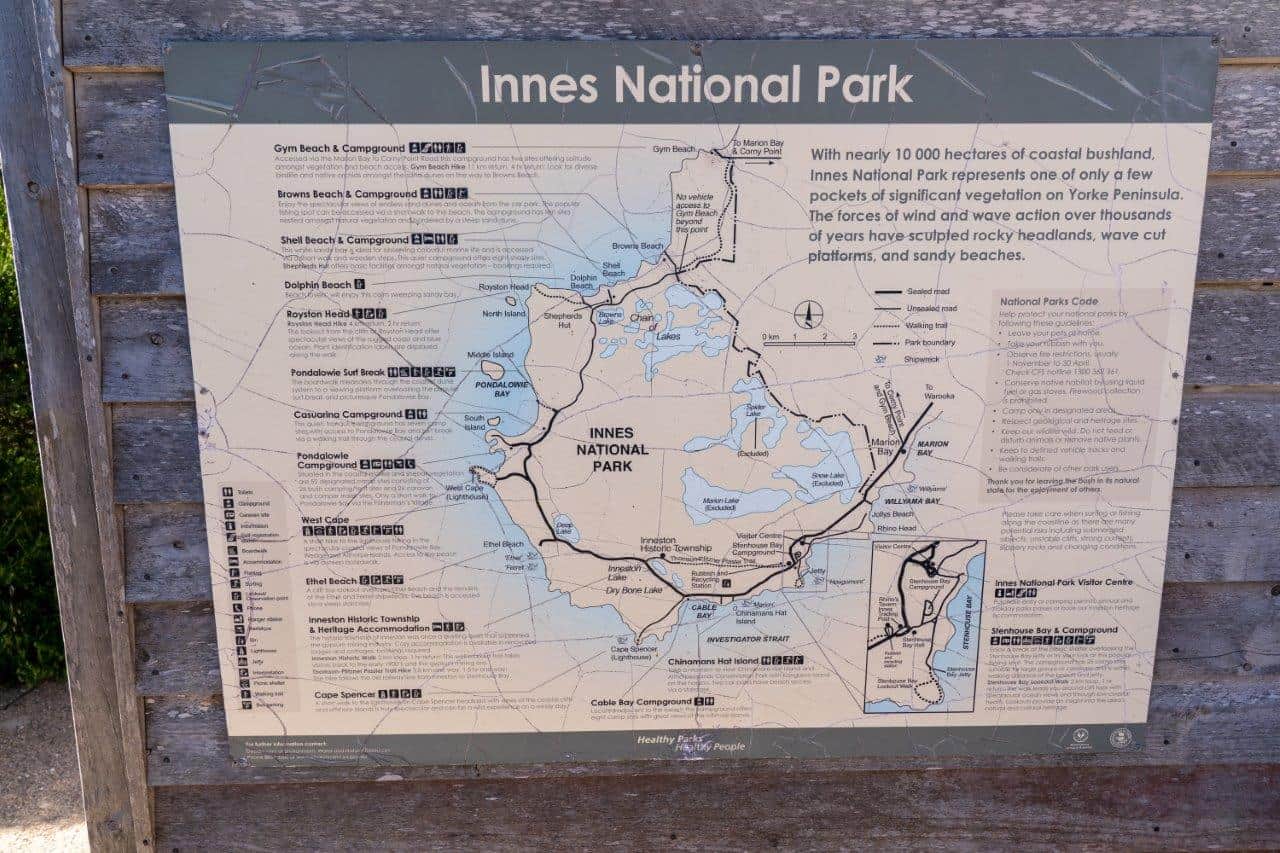 If you are looking to book a spot at Pondalowie Bay, make sure you know there are two sites! The first, is just referred to as Pondalowie Bay on the National Parks website, and the second is the camper trailer, trailer and caravan one.

Unfortunately they’ve duplicated the numbers that are used, and often get people booking into site number 1 (or any other number) that arrive and stay in the wrong spot! 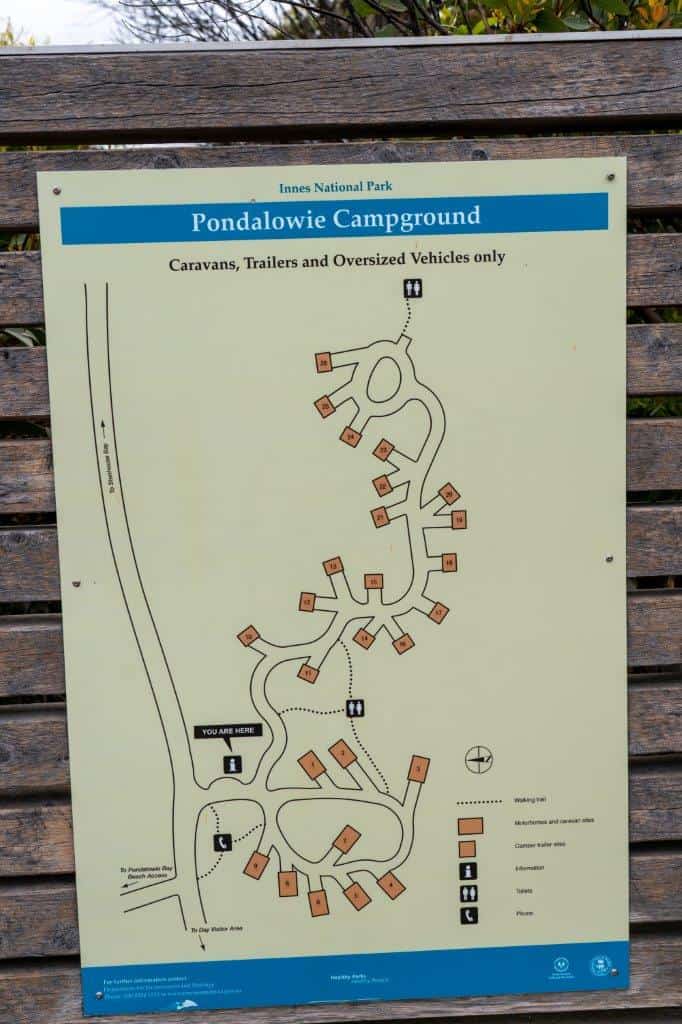 A map of the trailer camp ground

The first camp site that is suitable for tents has fairly small sites, but is not too bad. The second camp site is opposite the little track to the fishing village (and an awesome beach), and has big sites for vans, and some smaller ones for trailers and camper trailers.

Large camper trailers would struggle to fit in some of the sites, so book wisely. 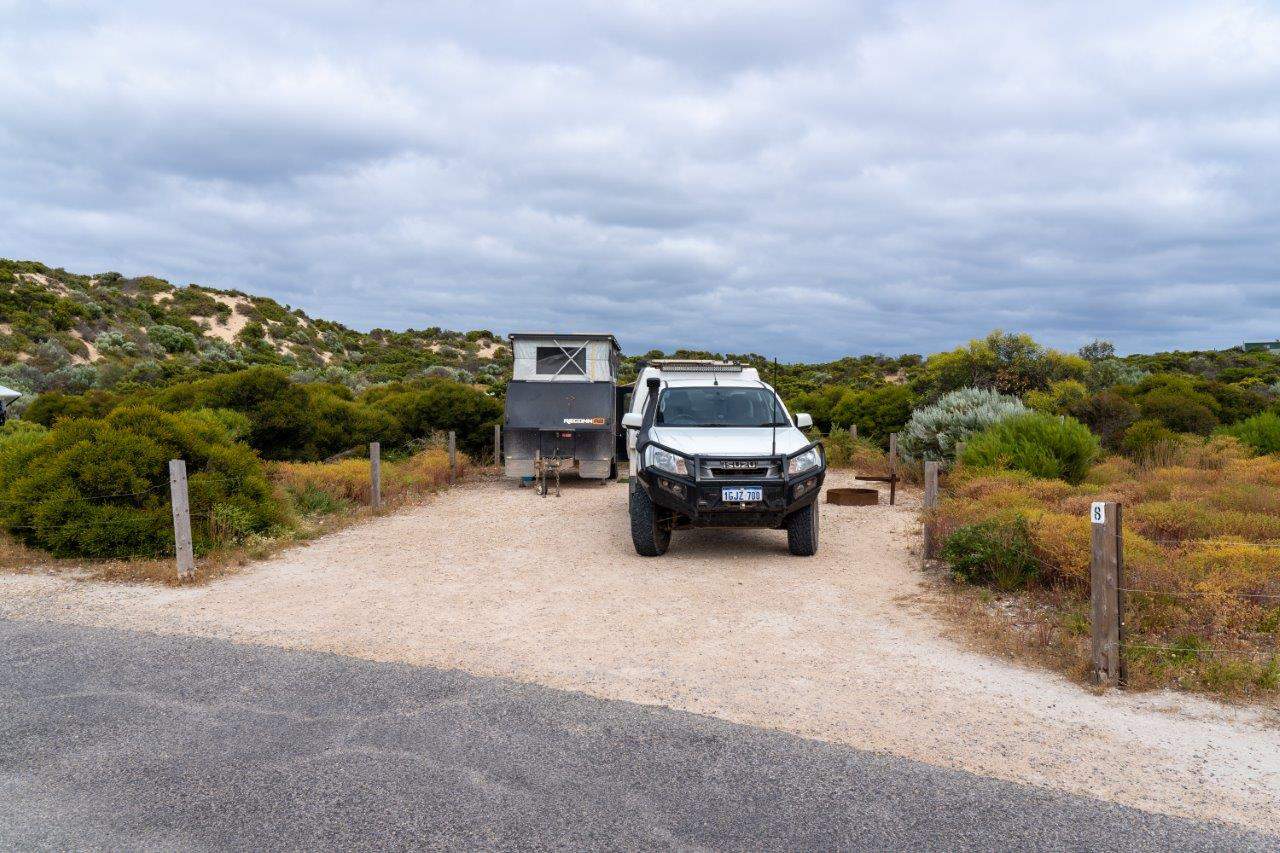 What does it cost to stay at Pondalowie Bay?

Its $24 a night to camp at Pondalowie Bay, per vehicle. That’s $4 a night more than you pay at the Yorke Peninsula Council sites, but you get a designated site that you book online in advance. I’m not going to say its bad value (as we’d pay more in WA), but its not cheap either, especially when the council run camp sites on the Yorke Peninsula are $20 a night.

There’s a couple of drop toilets, and a small rain water tank (boil before drinking), and that’s it. There’s no rubbish bins, no dump point, and nothing else. If you want rubbish bins you need to head to the ‘recycling station’ at Stenhouse Bay, or stay at the Caravan park. Water and Dump points are also only available at the Marion Bay Caravan Park, or another caravan park on either side of the peninsula. 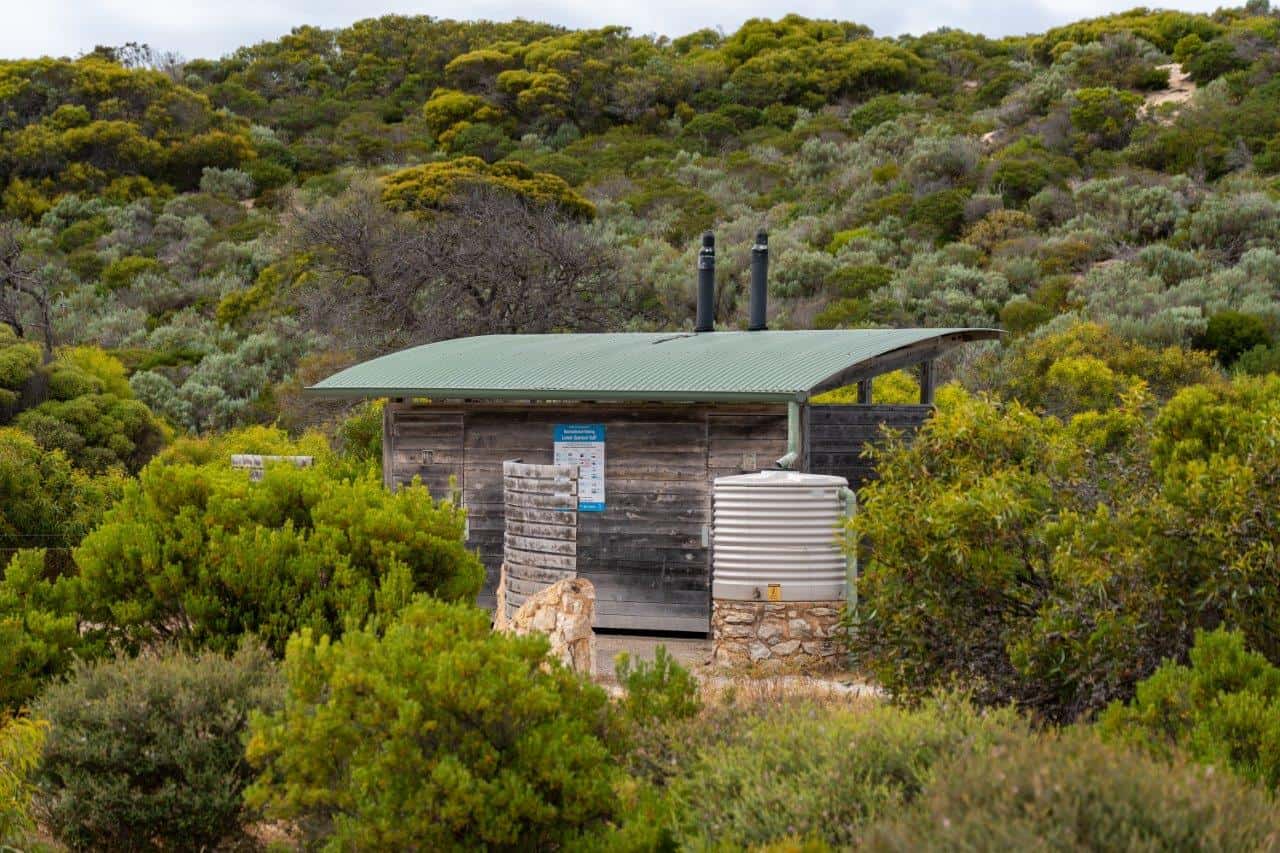 There’s a toilet, and nothing else

We chose to spend 3 nights at Pondalowie Bay because the camp ground seemed to be the nice, wasn’t tiny and there was a few options to get out of the wind during the day. If you have a caravan your options for camping are greatly limited as it is, and staying somewhere central made more sense than driving up from Stenhouse Bay each day (which I’d argue is not quite as nice a camp ground anyway). 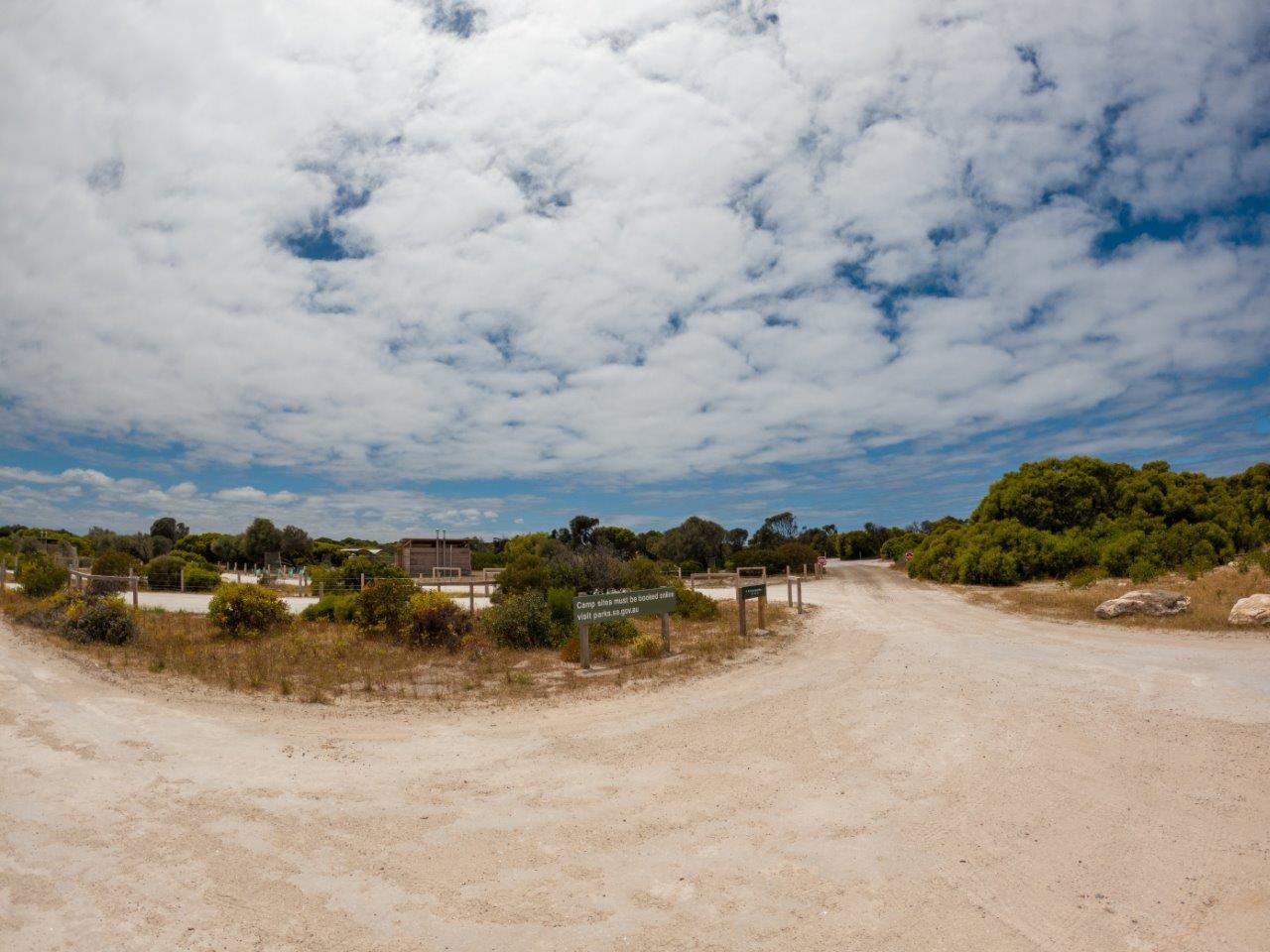 The fishing village opposite the camp grounds at Pondalowie Bay is interesting too, and the beach is absolutely magic, especially when the wind is blowing from the East. We walked there a number of times during our stay, or you can drive onto the beach a few hundred metres either way, and its pristine and beautiful. 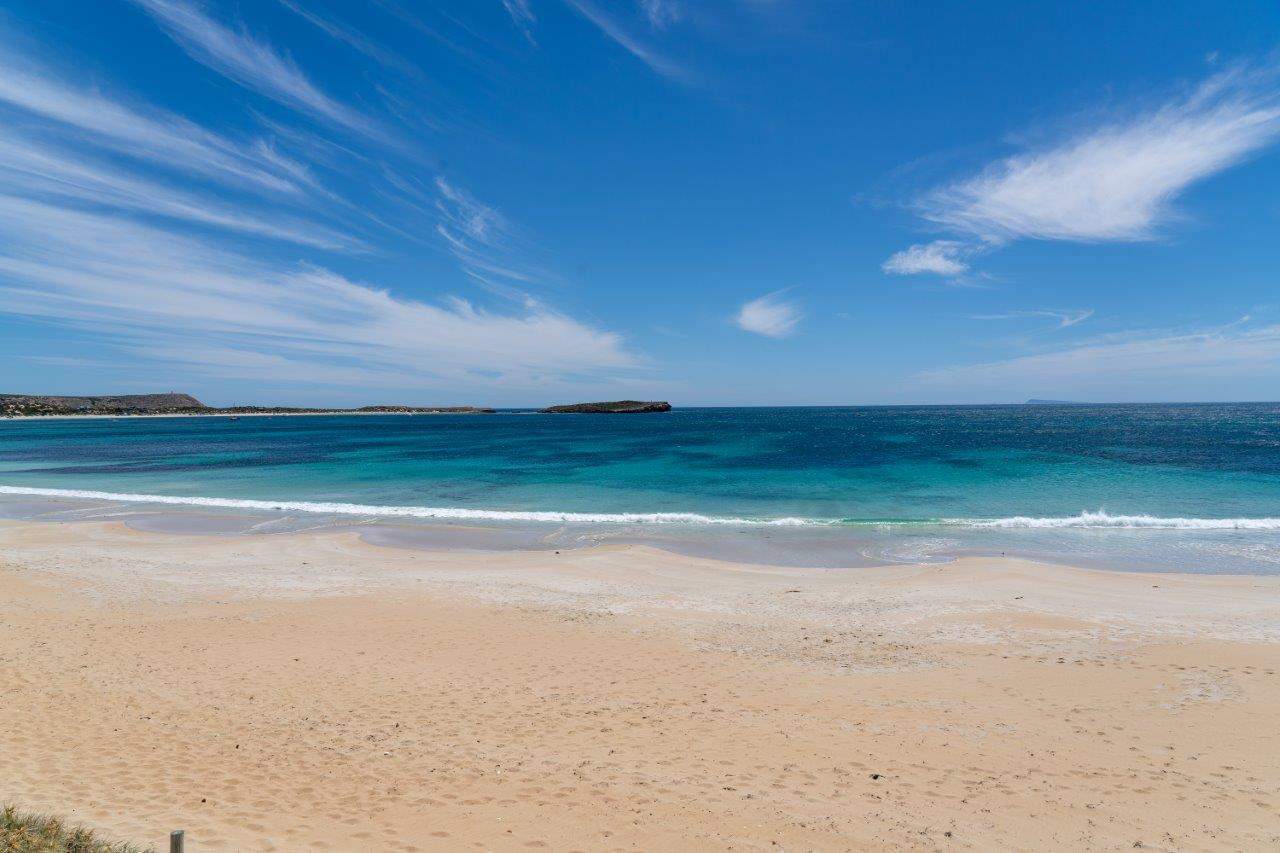 What attractions are nearby?

Being in the middle of the Innes National Park, you can pretty much drive to all of the locations in the park fairly quickly. We did everything, and rated Browns Beach, Shell Beach, Dolphin Beach, the two lighthouse walks, the jetty at Stenhouse Bay and a couple of the lookouts. You really can’t go too wrong anywhere in the National Park; its all pretty great country. 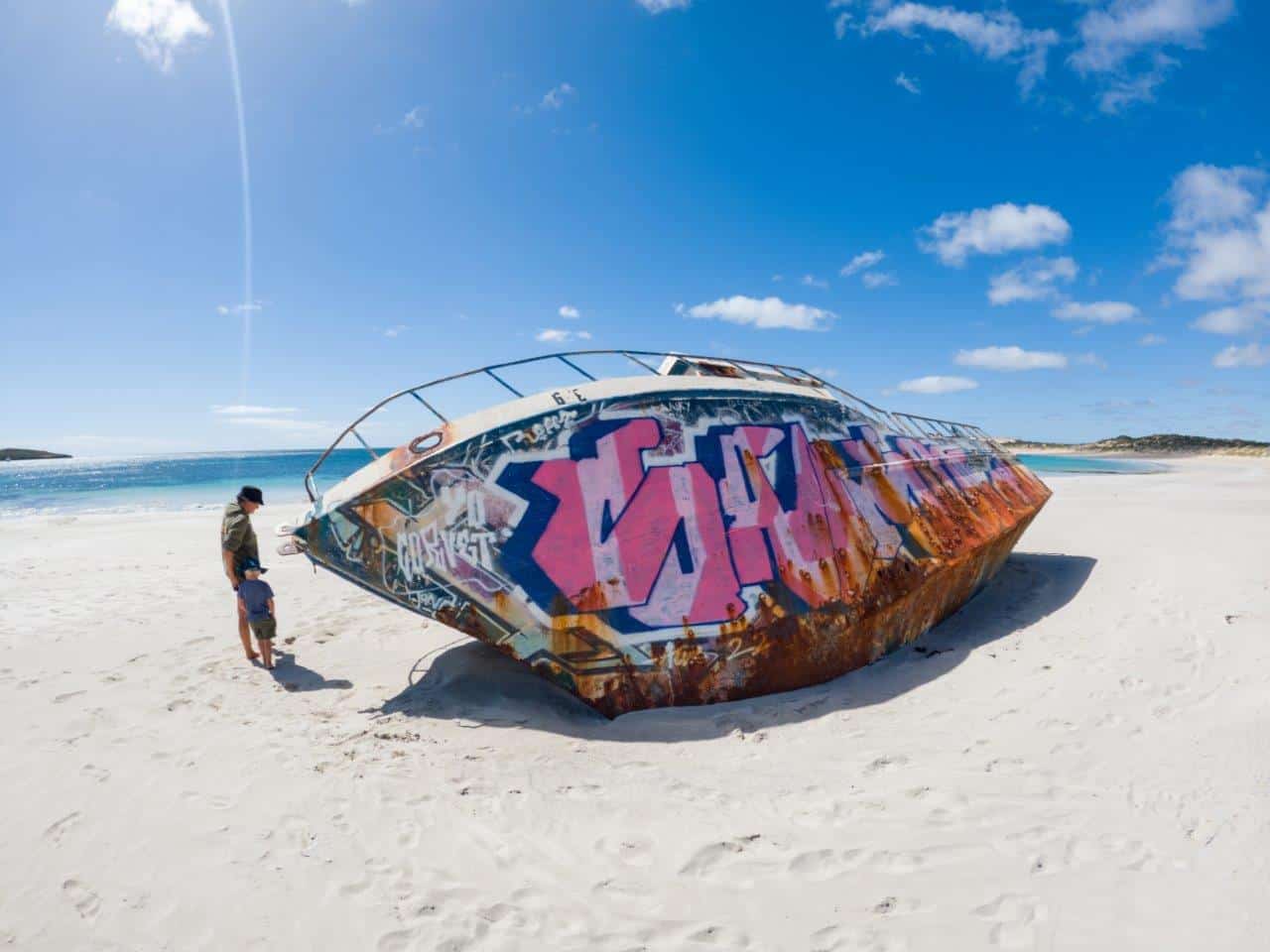 A boat wreck on the beach at Pondalowie 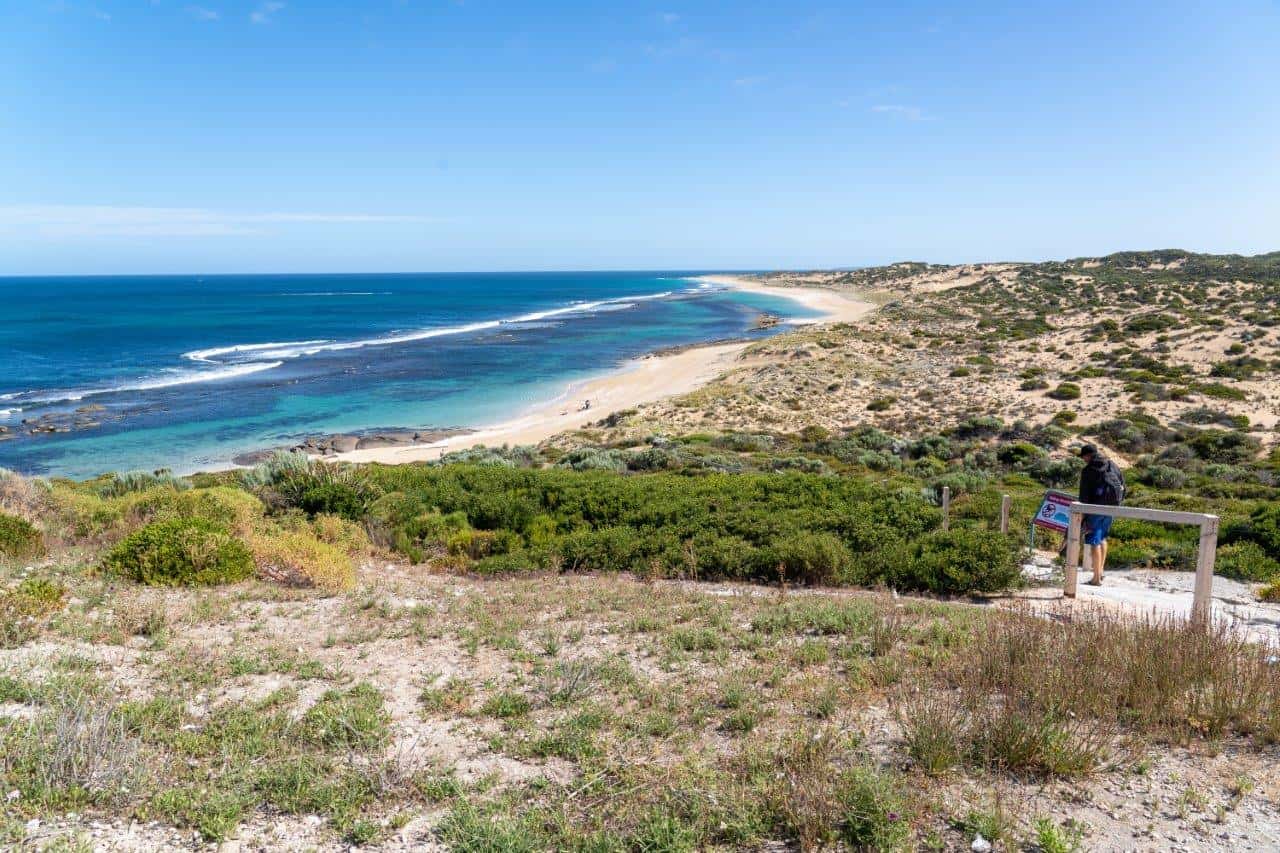 Browns Beach is nothing short of stunning 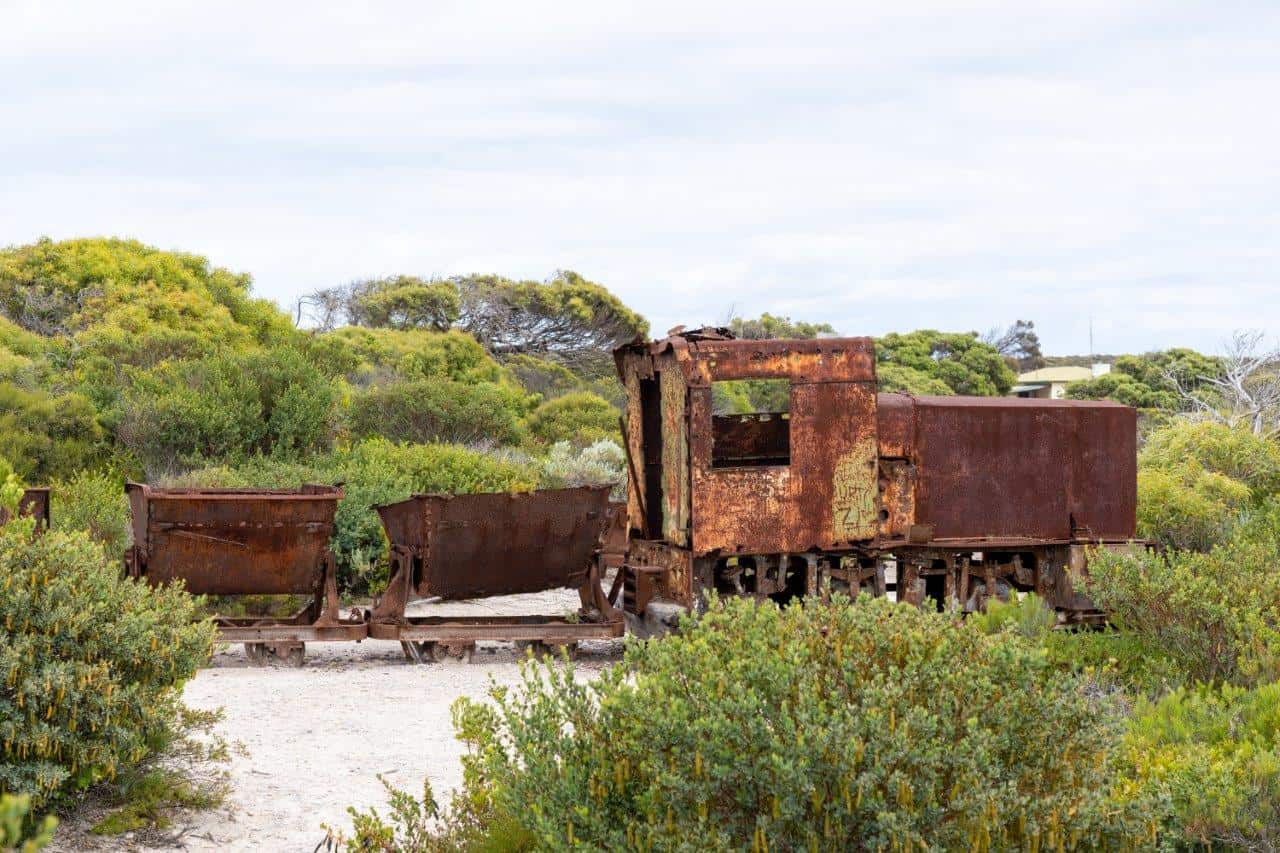 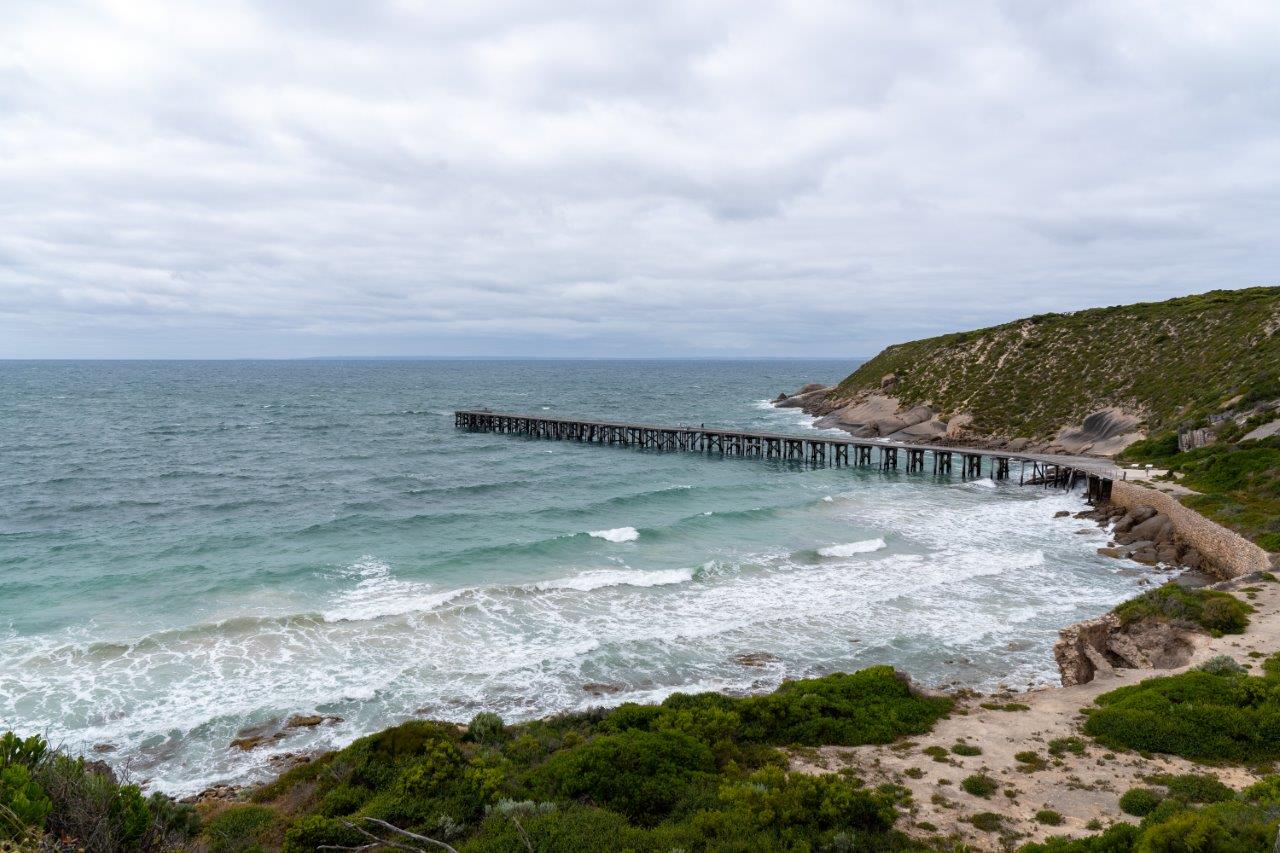 Stenhouse Bay Jetty was amazing, and would be incredible on a good day

Would we stay at Pondalowie Bay again?

Yep, we really enjoyed our stay here. It’s central, got a great beach within walking distance and overall is pretty good. We didn’t like the ticks too much, and Gym Beach is probably better overall, but this was our second best pick for the Innes National Park. 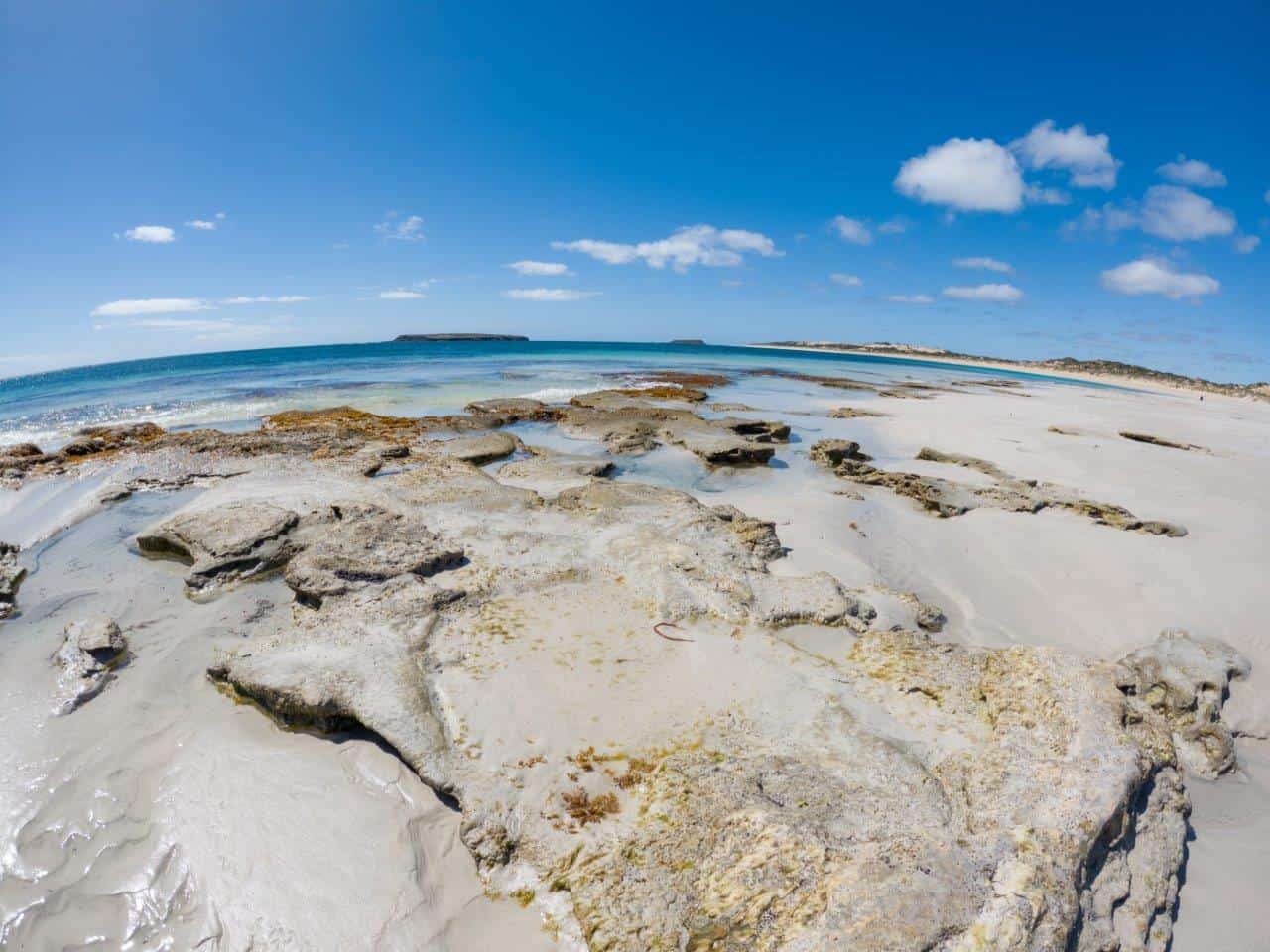 Have you stayed at Pondalowie Bay Camp Ground? What did you think of it?