Is a catch can important on a modern turbo diesel?

If you own a modern turbo diesel without a catch can, you’ll probably look back in the future and wish you’d fitted one. You can get a variety of different brands and models of catch can kits for $150 – $450 installed, and they play a hugely important role for your motor.

The only reason you’d not bother fitting one is if you are going to sell the vehicle after a couple of years. However, its still an attractive item for a lot of buyers due to the longevity improvements they provide.

What is a catch can, and what does it do?

By nature some oil, fuel and even water escapes from the motor during normal operation and ends up in the crankcase. In standard form, this film of oil is sucked back through the positive crankcase ventilation line (PCV) and ends up in your air intake, where it goes back into the motor to be burnt in the combustion process.

A catch can sits in between your crankcase and the PCV, and it is designed to separate the fluid and mist from the air that makes its way through and catch it in the bottom of the unit.

Some catch can’s have filters in them, and others use mesh, steel wool or a variety of combinations. If its just a can with an inlet and an outlet, you have bought one that won’t work very well! 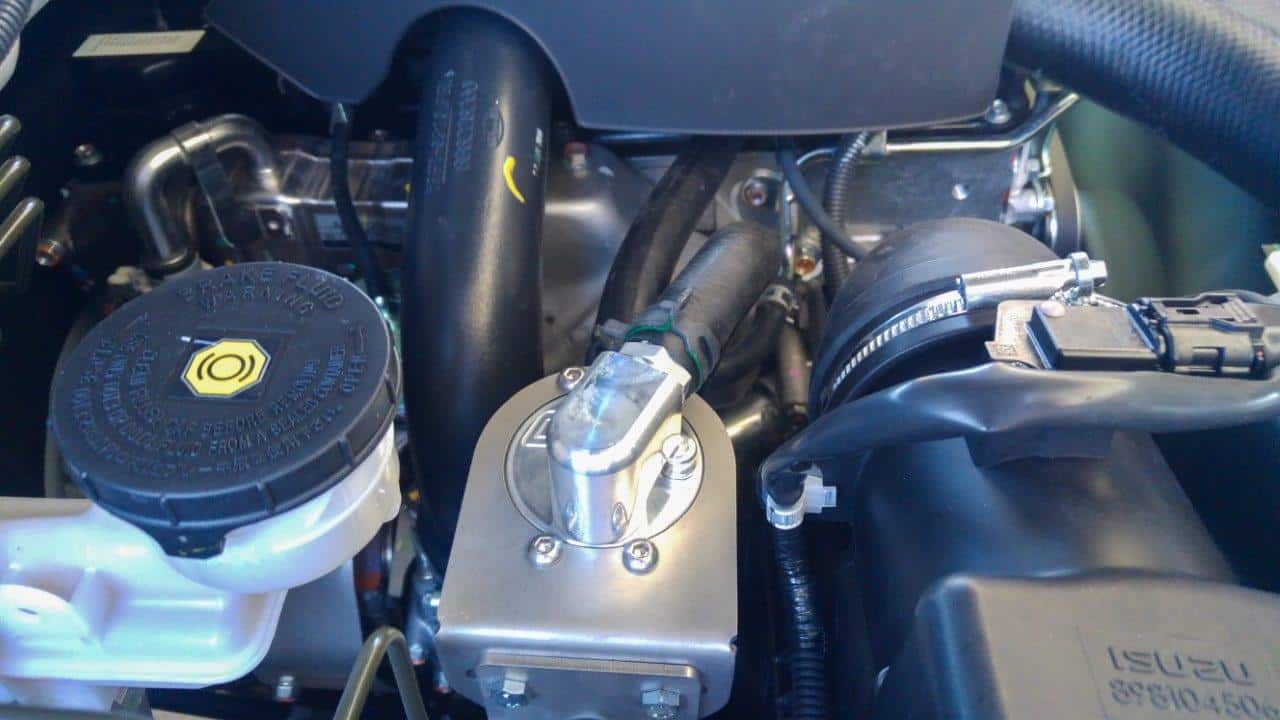 The new catch can on our Dmax

Why is it so important?

I can already hear you asking is a catch can worth it? Is it actually important? I’ll cover that now. The biggest reason you want a quality diesel catch can on a modern motor is to stop the massive problem it causes when it mixes with your exhaust gas recirculation system (EGR).

Turbo diesel motors have had exhaust gas recirculation systems now for some time, where a portion of the exhaust gas is recycled back through the motor. This isn’t a massive issue, except that by nature your exhaust gasses have carbon in them, and when this black soot mixes with an oil mist, it sticks to anything that it can.

Without a catch can, your engine’s air intake system cakes up with sticky black muck and soon becomes badly restricted. You only have to jump on Google Images and look up EGR intake clean to get an idea of how bad this actually is. Left without being cleaned, you will suffer significant losses in power and fuel economy.

There are a variety of ways of cleaning motors, which can be time consuming and expensive. If you can avoid the build up in the first place you’ll save a heap of headache.

The second reason catch cans are very important is because oil reduces the efficiency of your intercooler when it covers the pipe work. The colder the air going into the motor the better it performs, and if your intercooler doesn’t function as it should you are missing out on its potential.

The oil catch can benefits are simple; your intake stays clean which improves economy, power and reduces your long term maintenance costs.

How much oil does it catch?

This question depends on lots of different factors, but the amount of oil, water and fuel that is caught is actually significant. In 10,000km you should easily get 50 – 300 ml of fluid. What ever you don’t catch goes straight into your engine. Not good. Any mechanic worth their weight will tell you that much oil going into your intake is not good.

Catch can’s are 100% legal, and on some well designed diesels they actually come as standard. Sadly, this isn’t the case for your average 4WD motor.

In the past, people would just run a pipe to the inside of their chassis, and let the oil film run into the chassis, for ‘rust prevention’! This is not legal, and is one of 32 ways to make your 4WD illegal.

Another way to stop the build up of carbon in your intake is to block the EGR. This is also not legal, and yet a massive number of people do it. You can do this a number of ways; electronically by tricking the ECU into not using the EGR, or mechanically by installing a blanking plate.

By doing this though, often the ECU will pick up that there is a ‘problem’ and will throw a code with the check engine light come up. Also, if you are caught tampering with any emissions gear on your 4WD, you can be fined huge money. I believe in NSW the fine is up to $250,000 for an individual! That said, as far as I know there hasn’t been anyone fined near that amount, but they are starting to crack down on it.

Beyond that, the EGR actually provides some useful engineering benefits; its not just there for emission controls. By turning it off, you are changing the way the motor was engineered to run, and a huge amount of money and time goes into designing a quality 4WD motor.

By blocking the EGR you still end up with the oil going into your intake anyway, so its only half a fix.

The HPD catch can on our Dmax

The first accessory I bought for our Dmax was a catch can, from HPD. I spent many hours reading and researching the best catch can options, and settled on the HPD (which as it turns out was a mistake).

After 34,000km of testing on our Dmax, and reading an independent study on catch cans I’ve removed the HPD catch can in favour of something that catches a LOT more oil. If you want to know more, have a read of this; Why I’m removing my HPD Catch Can. Spoiler alert; the Provent Catch cans are far more effective. My HPD Catch Can Review isn’t favourable.

For the full test results including the 5625km the Provent 200 ran on our Dmax, check this out – Provent vs HPD Catch Cans. In terms of oil catch can reviews, make sure there is some independent, scientific research before you commit to buying something!

Why the HPD catch can?

At $385 delivered to your door, the HPD catch can is one of the more expensive ones on the market. Here’s a couple of reasons I initially chose them:

These have 4 stainless steel pieces of mesh on the inlet and the outlet. The idea is the air flow is disrupted going through the mesh, and causes the oil mist to stick to it and fall into the catch can. 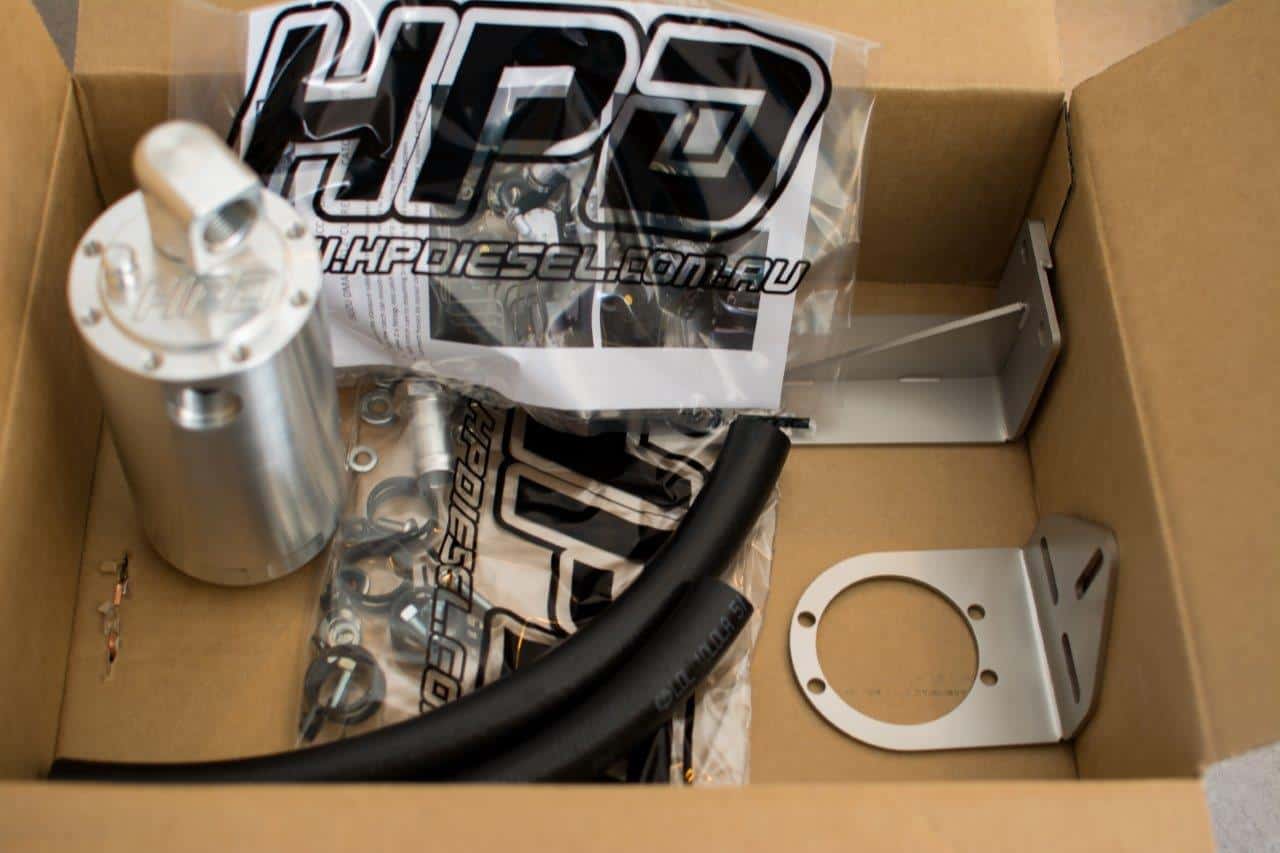 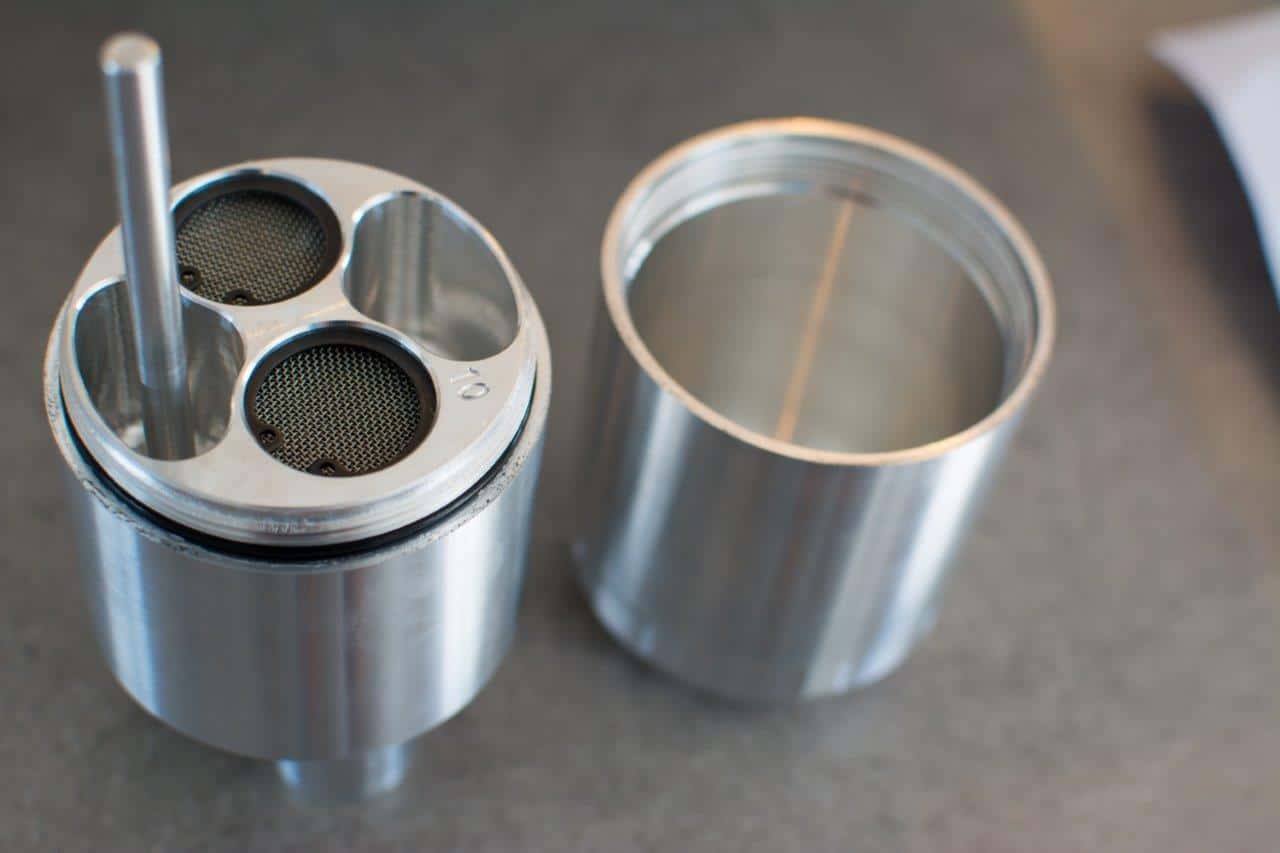 The bottom unscrews from the catch can 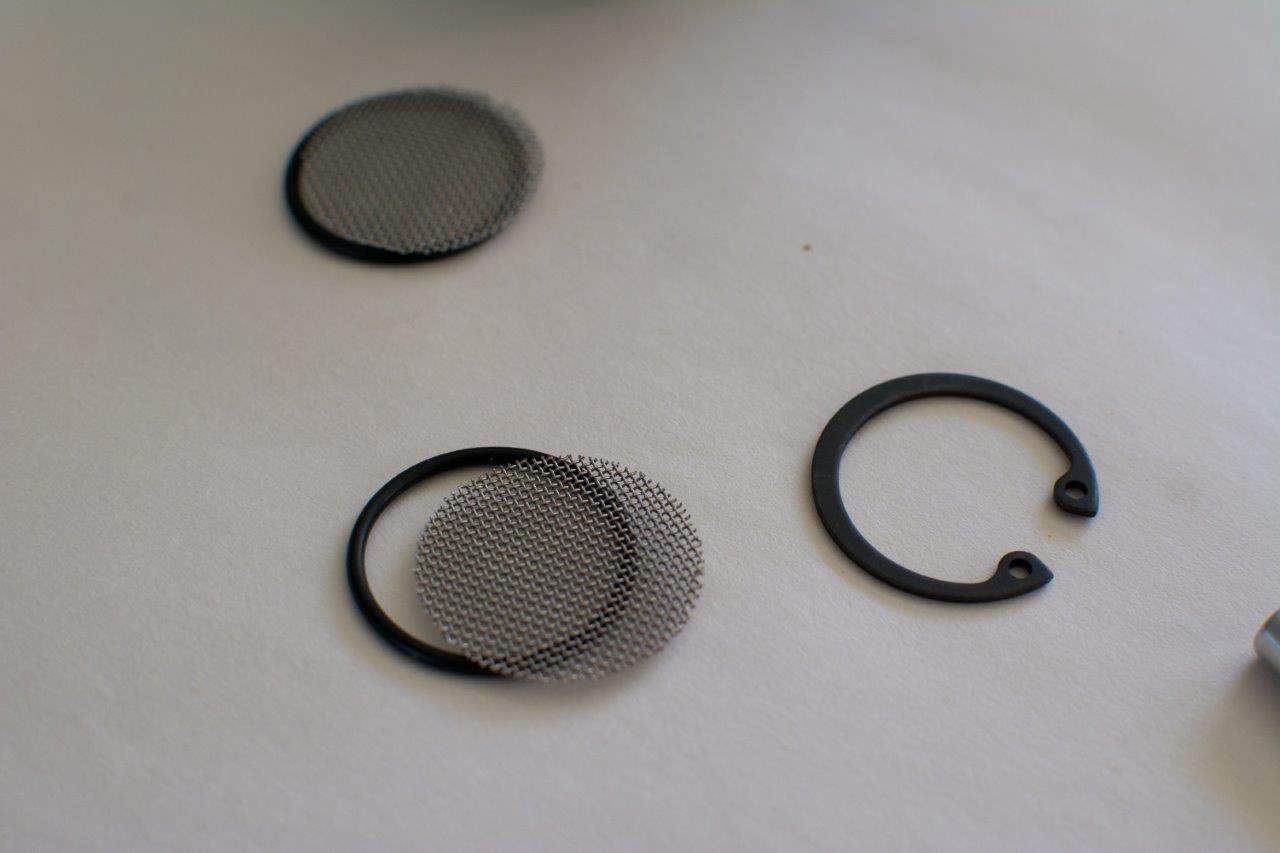 When I purchased and fitted the HPD catch can, I was fairly impressed with it. However, in the interest of being 100% honest, there were a few things I wasn’t 100% happy with and I’ll mention them below: 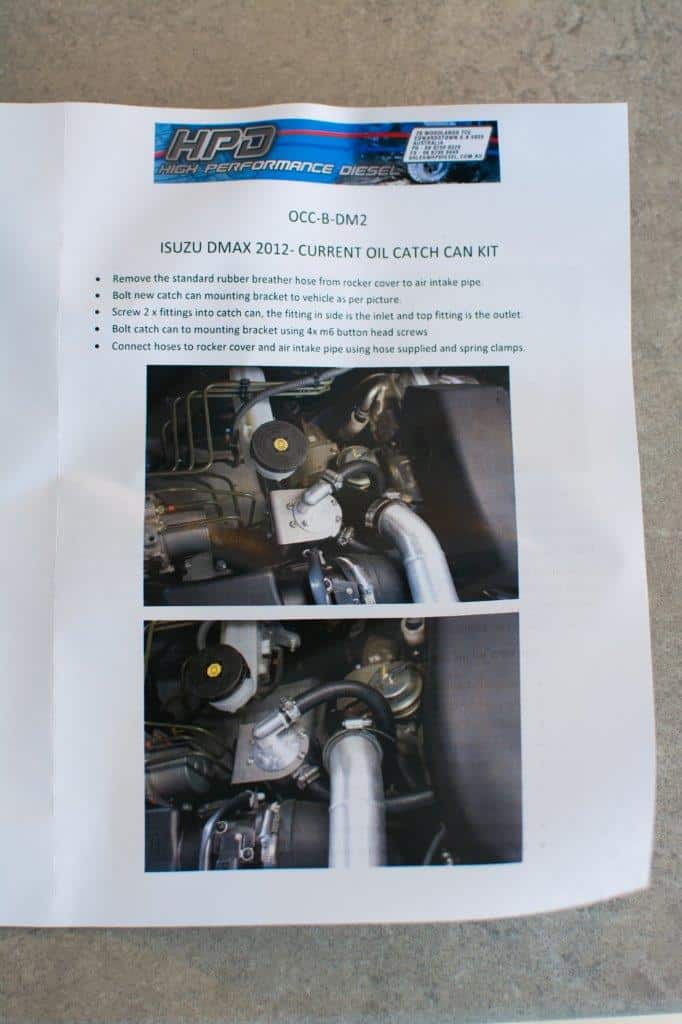 The other contender for catch cans on the Dmax was the Provent, made by Mann and Hummell. These are quality gear (make sure you get genuine ones), but they are massive. They also don’t come in a kit for the Dmax, and you have to replace filter cartridges every 45 – 70,000km at about $70 each.

Based on everything I’ve read online, I’d say the Provent probably catches marginally more than the HPD (EDIT: Not anymore; I’ve since learned they catch a LOT more). They are a German engineering company that runs a proper filter. You’ve got to expect that sort of result. However, there were things that I didn’t like about the Provent (like its size, inlet and outlet position, pressure created etc) and I decided on the HPD instead.

Not all catch cans are equal

Yep, you can go on eBay and buy an oil catch can for $45, and fit it to your expensive 4WD. The only problem though, is it probably won’t catch anything! If you want the best oil catch can, stick with a Provent 200!

There is some pretty intense engineering that goes into the design of a quality catch can; a steel box with a hose in one side and out the other is not going to do much. The best oil catch can may not be the prettiest looking.

Make sure you buy genuine too; there are a lot of rip offs, specifically around the Provents.

Like everything, there’s no free lunch. A poor quality catch can has the potential to cause issues if it restricts the flow too much, or is not emptied regularly enough, or not maintained well. The solution to this is to get a well engineered and proven catch can, and look after it. You won’t have any problems if you do this.

Returning the oil back into the engine

Some people take the oil collected from a catch can, and tip it back into the motor. You can do this, but I wouldn’t. For starters, its often got moisture in it, and even fuel thats escaped the combustion process. The oil is not good quality; get rid of it.

Is a catch can necessary?

There’s a lot of diesel motors out there that don’t run catch cans, so they are not an absolute must fit. However, if its your vehicle and you plan to keep it for more than a couple of years a good catch can should be considered important. I wouldn’t own a modern turbo diesel without one.

I’ll pass on how the catch can goes in the future – maybe after 5000 – 10,000km. For now though, I know its another thing ‘fixed’ and it will save a lot of headache down the track.

EDIT – If you missed the updates, I’ve removed the HPD catch can and fitted a Provent 200 which catches significantly more oil.

If you want to see the rest of the 4WD build, check this out – Isuzu Dmax build for touring Australia.

Do you run a catch can? What did you fit? What do you think of it? How much oil do you catch?