Wilbinga is a spectacular 4WD accessible beach located only a short drive north of Perth. It’s commonly used for fishing, 4WDing and motorbike riding. It has become extremely popular over the last few years because it’s the closest Beach driving near Perth heading north.

There are a large number of 4WD tracks that you can play around on, some of which are actually quite challenging for the average car. The beach is much like the rest of WA beaches; simple beautiful. We managed to get some decent fish there as well, which adds to the fun! 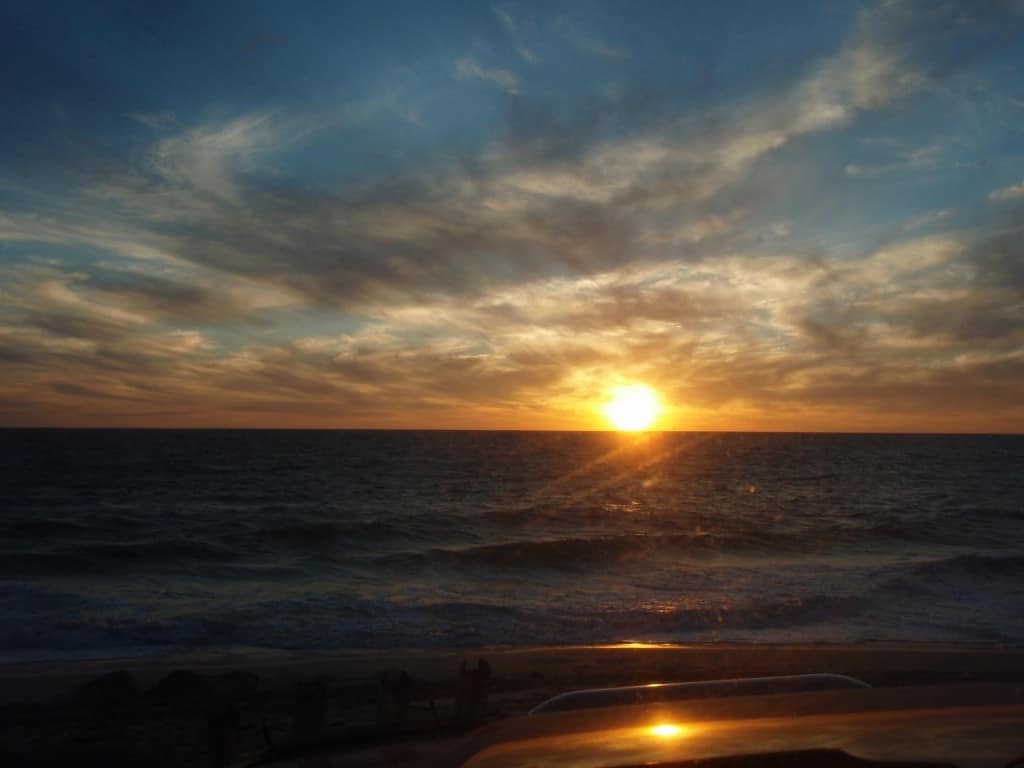 Wilbinga is about 60 kilometres north of Perth. To get there, you just head straight up Wanneroo Road. After around 35km you will go over a little hill, and see a big pine tree forest on the left. There is a limestone track which runs directly west.

This is known as Wilbinga Road, and can be driven by normal 2WD cars if you take it slowly. A few kilometres down the track there are some signs and a ‘parking’ area. This is where you need to let your tyres down. A number of people leave their 2WD cars here and ride their motorbikes through the rest of the track and onto the beach.

Alternatively, you can enter at the rest stop car park further North. Wilbinga beach access is not permitted via Two Rocks anymore. 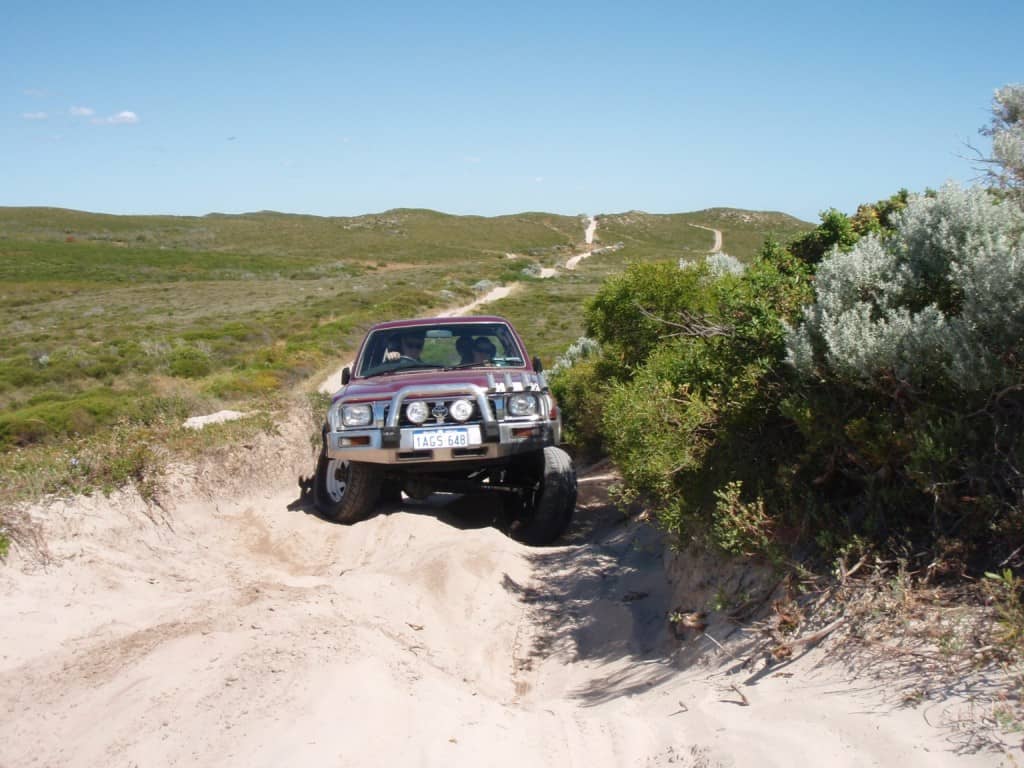 A few 4WD tracks at Wilbinga

There are a lot of 4WD tracks that run through the bush near Wilbinga. Some are solid and easy to drive, whilst others can be more difficult. We had a lot of fun trying to drive up the big hills (which are very obvious when you come across them). A lot of the hills have huge offset articulation, which is good fun to test your suspension on!

We found that 15 PSI was a good pressure to run our tyres at, as the beach is quite soft at times. You can drive both north and south of Wilbinga, depending on what you want to do. If you are in a 4×4, keep a keen eye out for those on motorbikes, as they can often fly around a corner without expecting oncoming traffic! Also, take a look at the post I wrote on Beach Driving.

Be aware that you are not allowed to drive into the city of Wanneroo, or you may cop a fine from the rangers. You are free to drive anywhere except south of Flat rocks, which is pretty hard to miss. Access from Two rocks has been closed, and anyone going in from there deserves a fine. I will repeat that; Two rocks 4WD beach access is off limits! 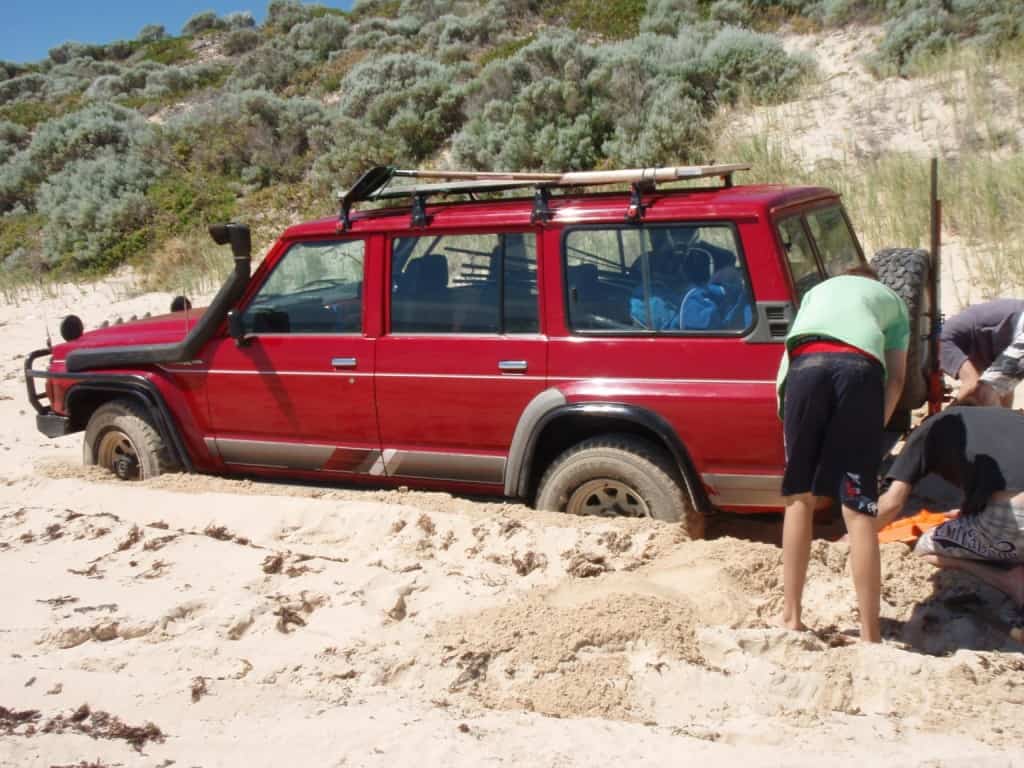 Soft sand and not enough deflation 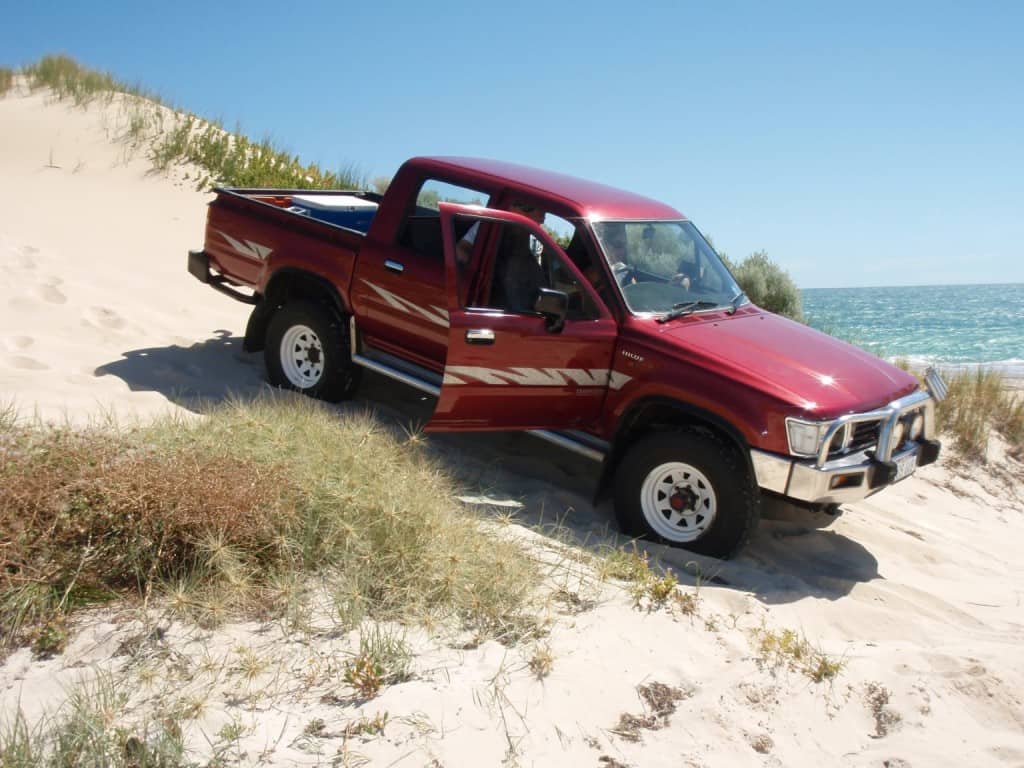 My new car at Wilbinga 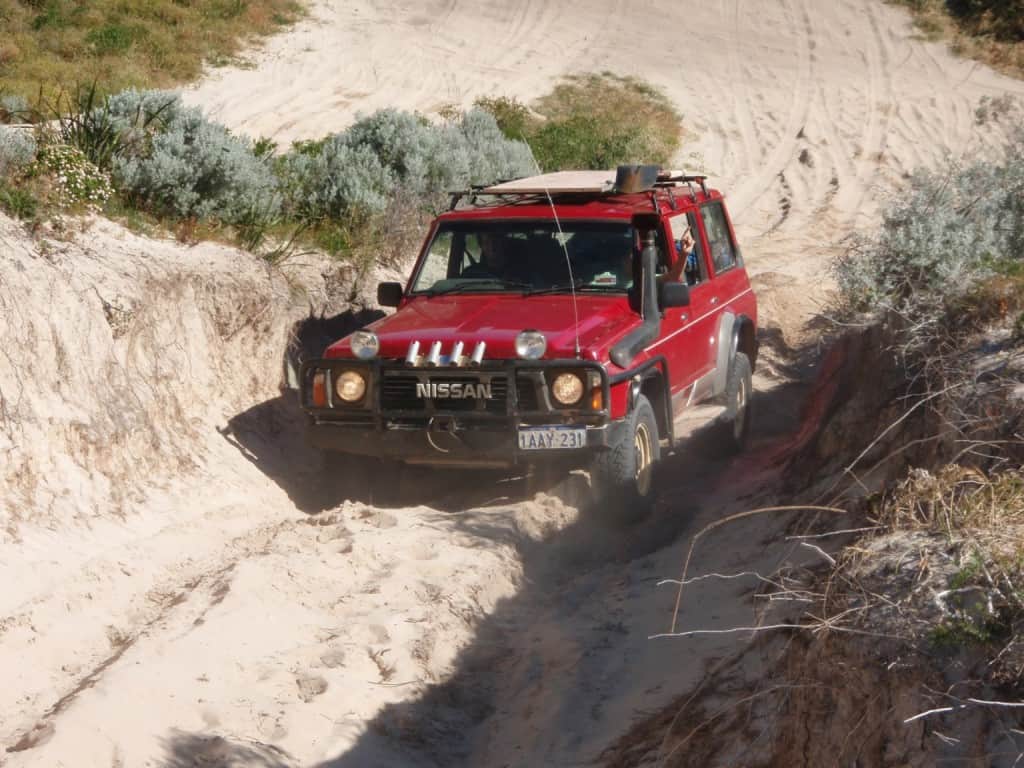 Trying to drive up a dune

Camping  is not permitted at Wilbinga, although a lot of people still seem to do it.

Driving from Wilbinga to Moore River

If you are up for an adventure, you can start on the beach of Wilbinga and head north until you get to Moore River. In saying this, we tried it and got incredibly lost and had to turn back! I believe the easier way is to start at Seabird and work up. 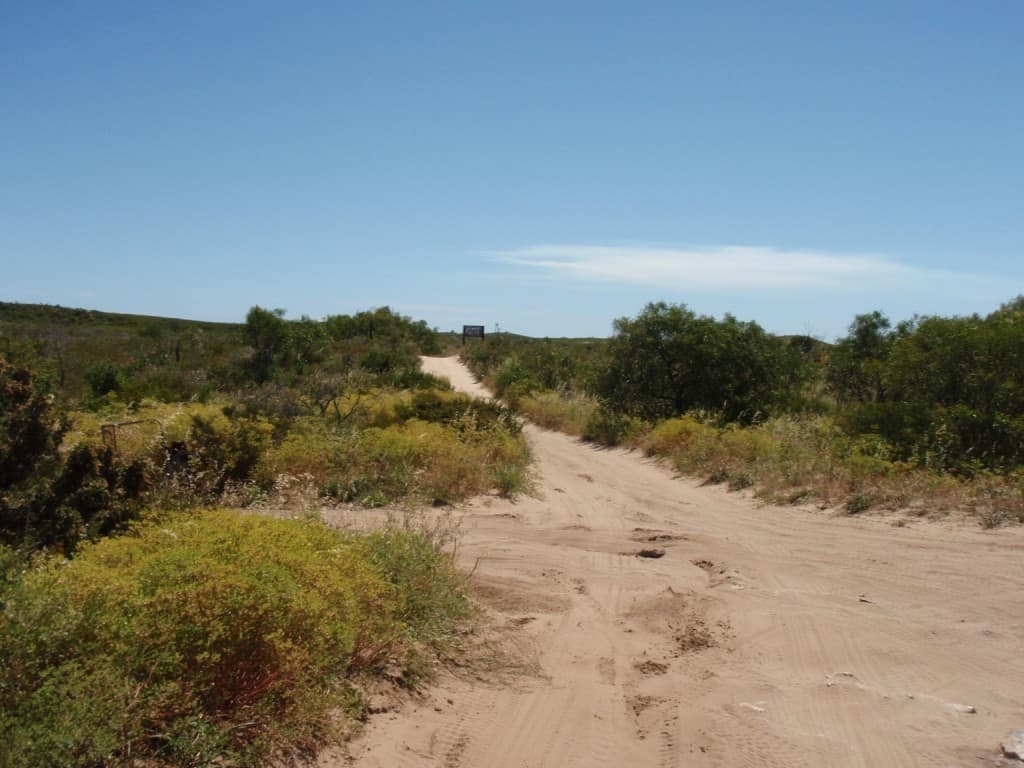 There are a number of properties as you head further north with fences and no trespassing signs. We ended up at someone’s front door (without trespassing to our knowledge) which was quite embarrassing. Be careful of the cattle as well, because you will see them fairly regularly as you drive along.

We started back on the beach near Ledge Point and drove all the way up to Greenhead (through Lancelin and Wedge Island). We did have to pull onto the tarmac a few times, but you can do most of it on the beach.

What to take to Wilbinga

This depends entirely on how long you are planning on going for, but there are a few things that you should take even if you are just going for the day. I would suggest Tyre Deflators will make your life much easier when letting air out of the rubber.

I bought one for $20 (a ferret tyre deflator) and am very happy with it. A Car Air Compressor is also a must, as there are no petrol stations within a close distance, and driving on the road with low pressures in your tyres is not a good idea. 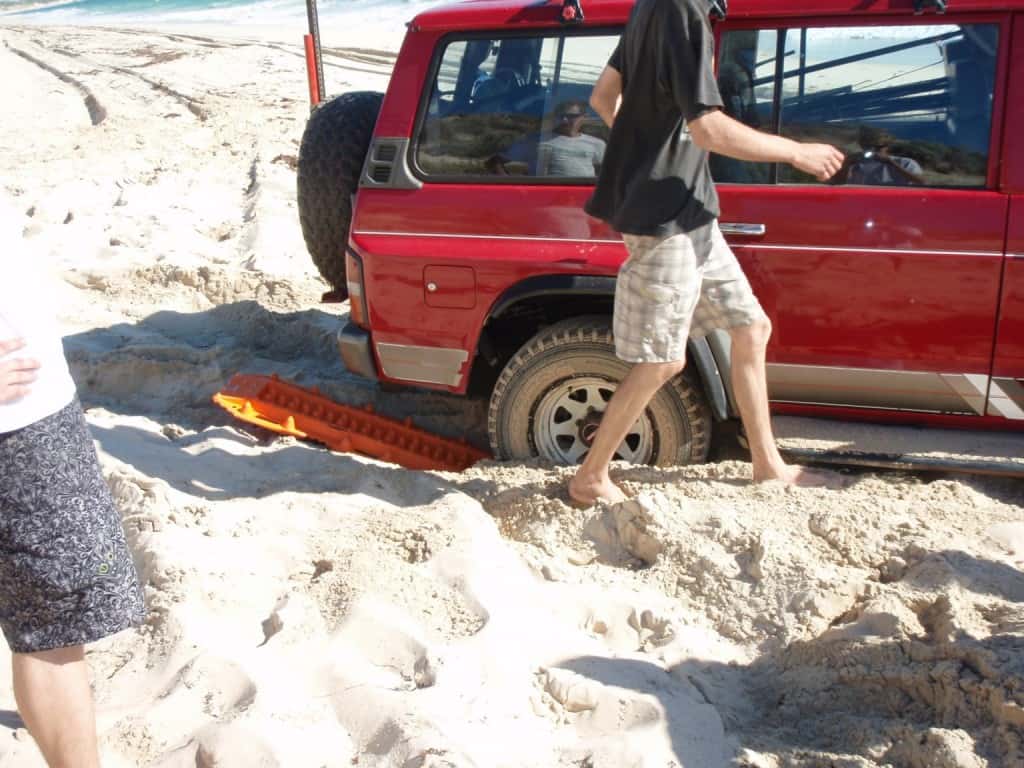 Maxtrax are a handy recovery device

Take plenty of water and food, and bring the rods and other fishing gear. We had a fair bit of fun catching fish at Wilbinga, and if you pick the right time and place you can get some decent sized fish. I have heard of people surfing in this area as well, but you need to pick the day.

A snatch strap is also a good idea, as well as a shovel and Maxtrax. It’s easy to get stuck (see the pictures) and not so easy to get out. Just remember that snatch straps are only meant for so much force; dig a bit around the car before you try to pull it out!

Wilbinga was the first place that I took My Hilux, as you can see from the lack of modifications. It’s a great place to go four wheel driving as there are easy tracks and more challenging ones. It is also very close to Perth and well worth a visit. Whether you want to have a cheap camping trip or just want to kill a few hours I would highly recommend Wilbinga! 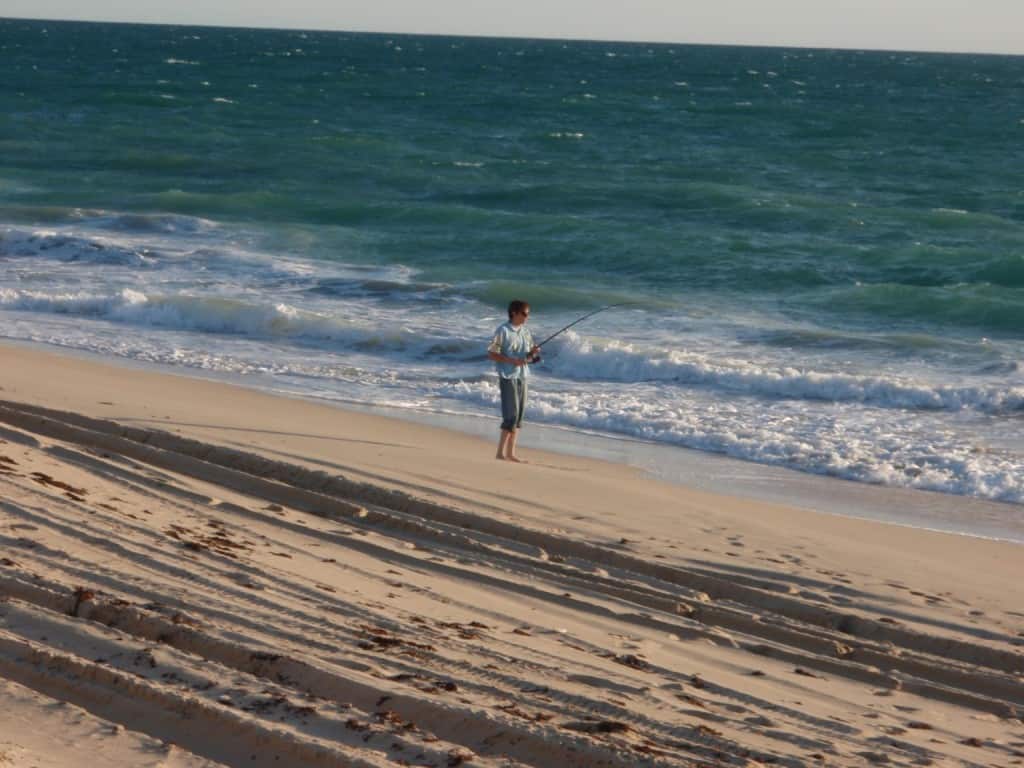 Relaxing with a line out