Ryobi 18V Chainsaw review; are they actually any good?

A good fire really makes camping. Nothing compares to sitting around the warmth and flickering light of a fire with friends and family at night.

In the months leading up to our 3 month Northern Territory trip, I knew I had to sort something out for getting firewood easily. In the past I’d used a little hatchet, which was past its use by date, and couldn’t cut anything big if you wanted to.

Couple that with a Soft floor camper trailer, an 18 month old and a pregnant wife, and I wanted something that was going to make life easy! Perhaps a Ryobi 18V Chainsaw would be in order?! 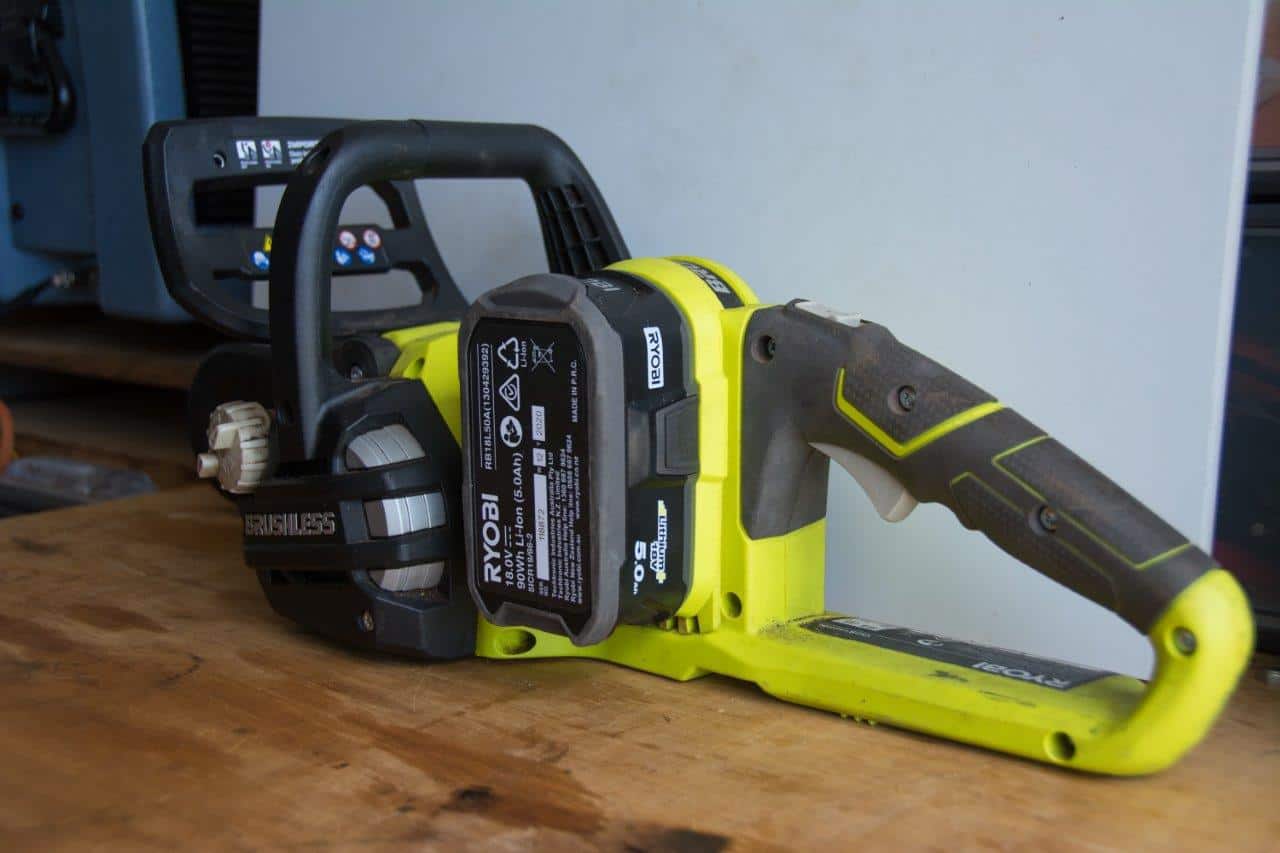 Having already purchased some of the Ryobi gear, and with first hand experience of how it goes long term (we have a range of the Ryobi gear at work that cops a fair amount of punishment) an 18V Battery Powered chainsaw was an option I was ready to consider. 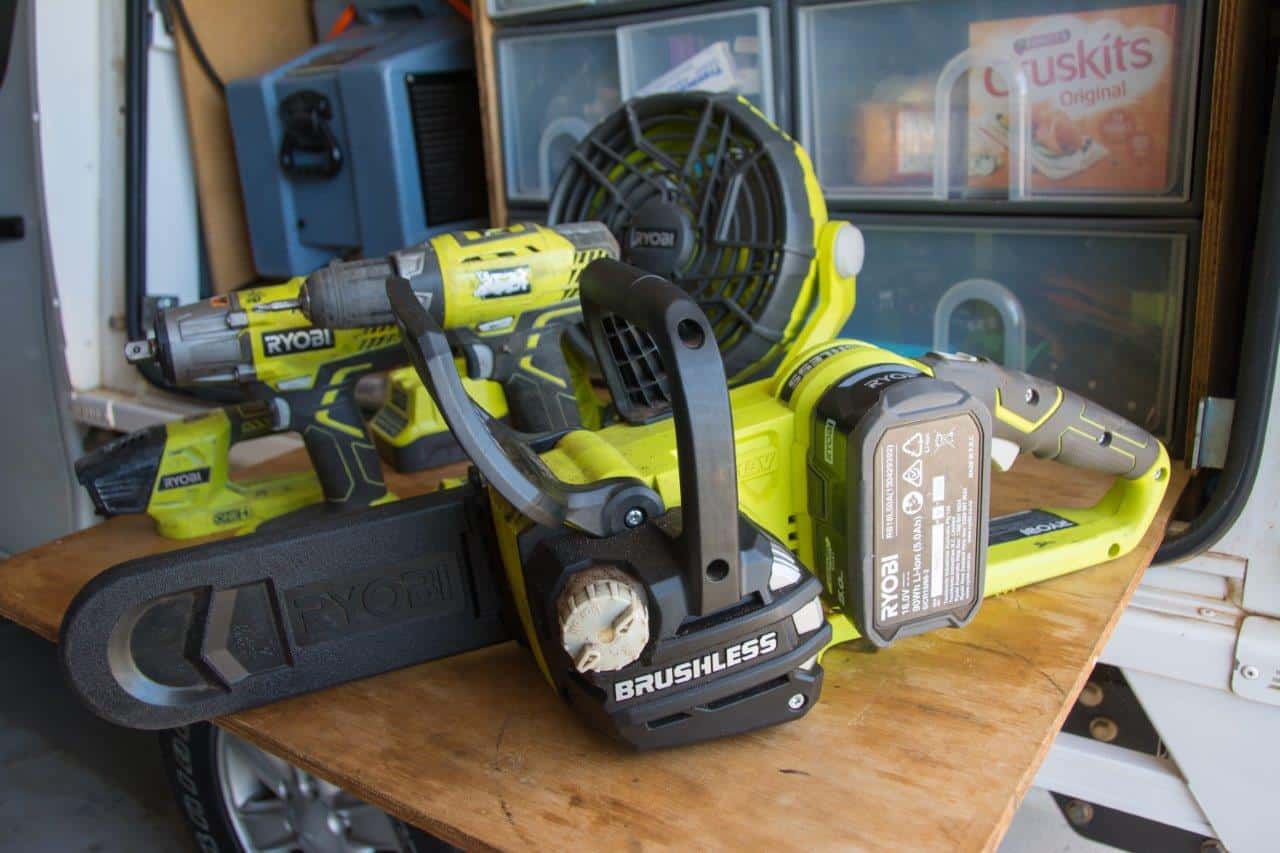 We already ran a heap of other Ryobi 18V tools

On one hand, a reciprocating saw is useful for many applications, whereas a chainsaw is only good for one thing; cutting wood. You can also replace blades easily on a reciprocating saw, rather than having t worry about sharpening them, and keeping them oiled.

What to do? I ruled out anything that was too hard work, and petrol chainsaws are overkill for what we need (and more expensive/more maintenance and less reliable).

I committed to getting something; I know you can do without cutting wood up, but the idea of having longer bits of timber sticking out of a fire with young kids running around just wasn’t going to cut it, and its far more effort trying to get suitable wood.

Getting a battery chainsaw

I spent hours researching, watching videos and trying to work it out. In the end, I decided on the $249 (was $239 when we bought it) Ryobi 18V brushless chainsaw from Bunnings, and a 1 litre bottle of bar oil from Repco (Bunnings are a rip off for bar oil!).

You can get the normal 18V chainsaw (not brushless) for $169, but its even less powerful, doesn’t have the auto lube, simple tensioner or the kick back guard. 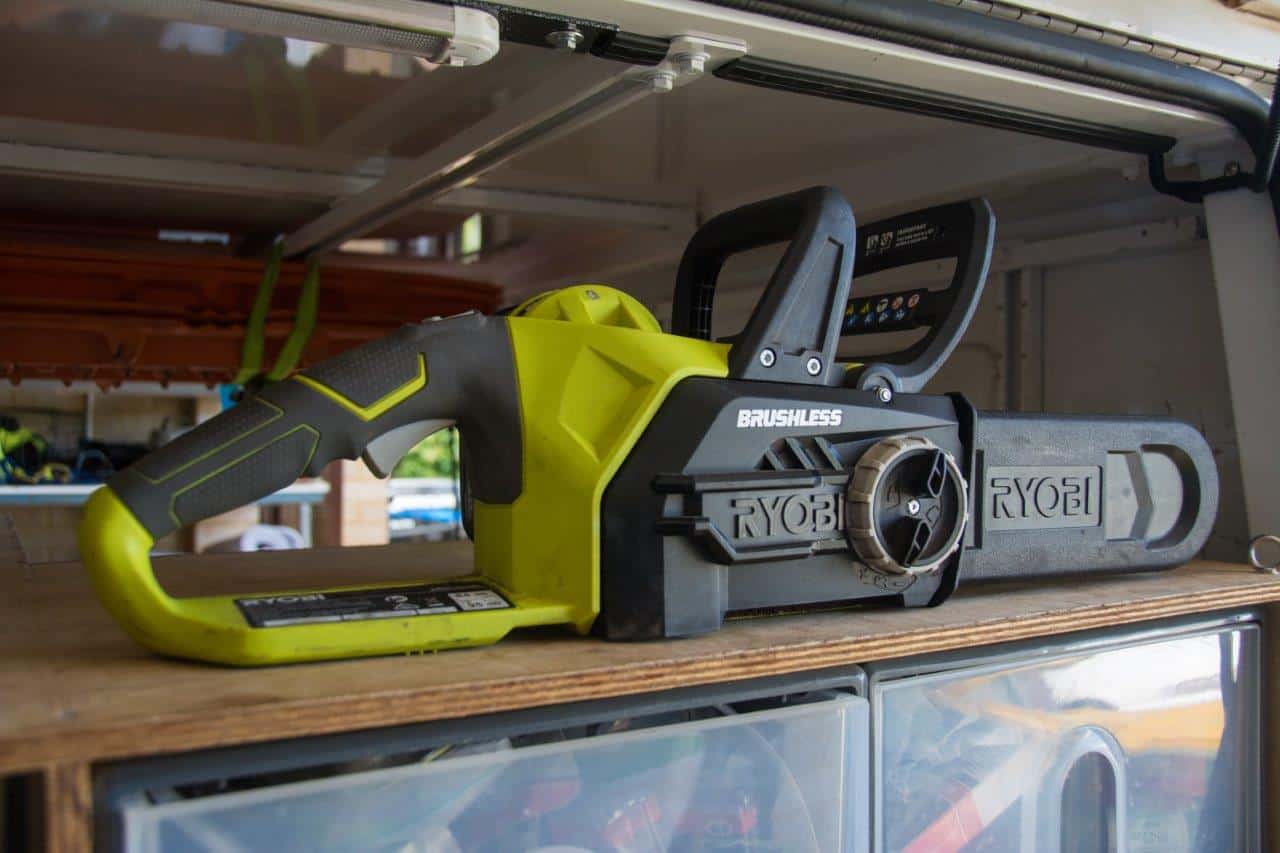 These have been on the market for a few years now

If you’ve not had much to do with battery powered gear over the years, you might want to re-consider your opinions of them. You can now get everything from vacuum cleaners to air compressors, lawn mowers and everything in between.

Even electric cars are becoming more and more popular! Battery technology has come a huge way, and its incredible to see what some of this gear can do.

There are a variety of different options when it comes to battery powered gear, with most of it starting off at 18V, a fair bit at 36V and some at 56V. Obviously the larger you go the more power you have available, but they often use different batteries too (although some use two 18V ones to make 36V for example)

In our case, I wasn’t going to use it for commercial grade work, so I thought the 18V unit would be just fine (and it matched in with our other Ryobi 18V gear).

In terms of comparing a battery powered chainsaw against a petrol version, there are a few major benefits. The first is that you don’t need petrol. This means that there’s no fumes, and no jerry cans needed. It also means you don’t need to mix oil in, and muck around with spilling anything, and when you are actually using the chainsaw you aren’t having to breathe in fumes.

They can be charged from 12V or 240V, which makes it easy to do anywhere in Australia, providing you have a basic 12V system (or are near 240V). 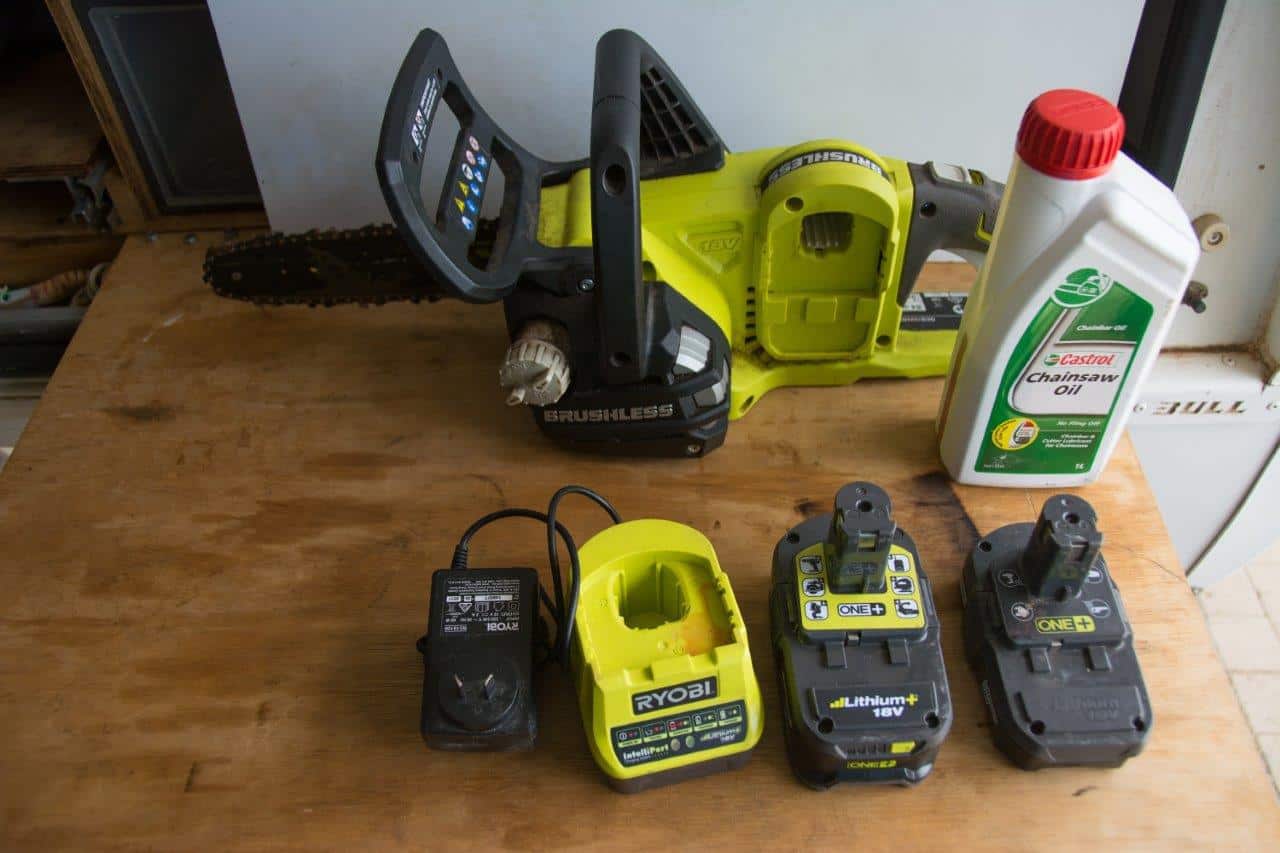 A 240V charger, bar oil and a couple of batteries is all you need

They are incredible quiet compared to petrol chainsaws, which is very useful when camping. There are also far less issues with them not starting, requiring cleaning out and servicing. You can leave a battery powered chainsaw for months, or years and it will start first go with a charged battery. You can’t say the same for a petrol chainsaw; often they take a fair bit of work to get going after sitting for a long time.

They are also much lighter, and a number of arborists are actually carrying them for light duties up high because of this. Right now, they won’t replace a fuel powered chainsaw for heavy duty work, but it won’t be long before they do. 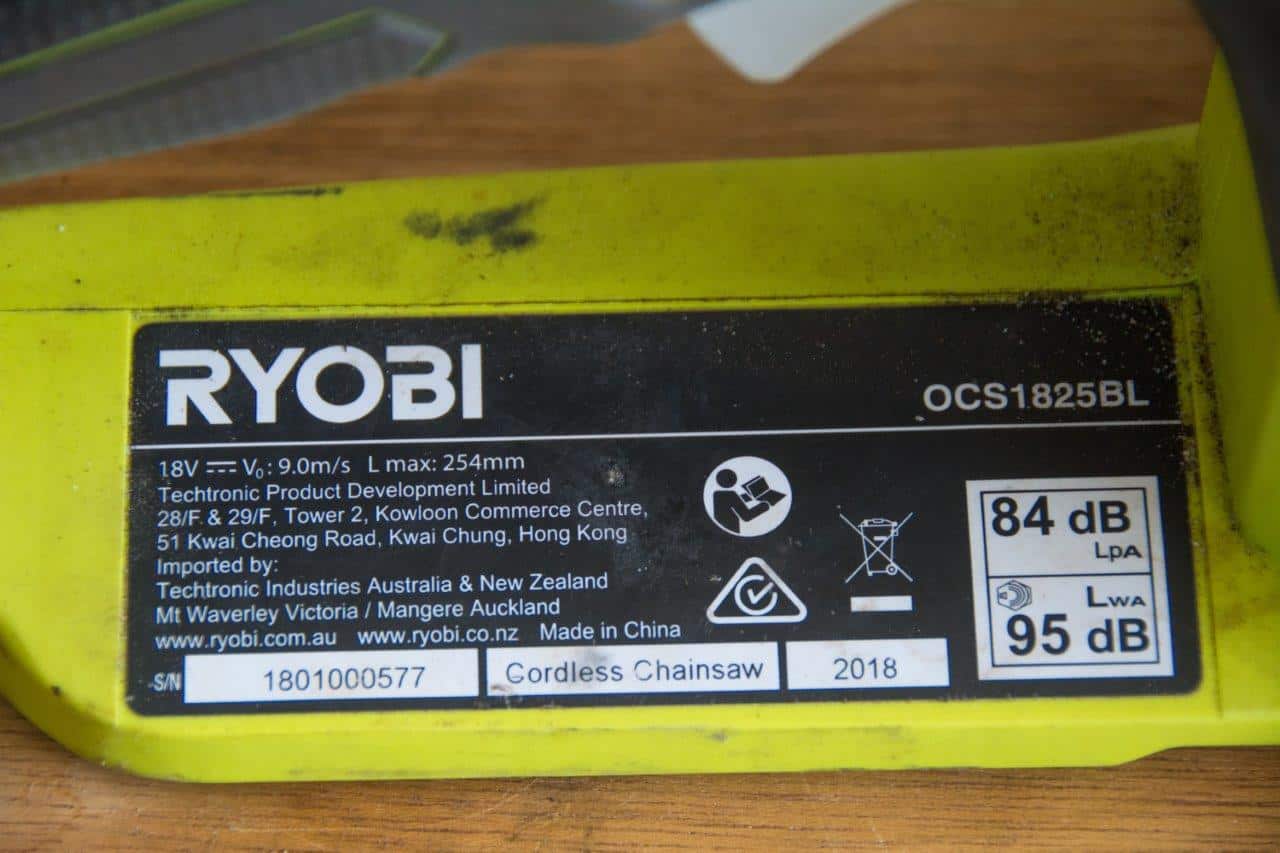 Chainsaws obviously work pretty hard, and that means they need quality batteries to back it up. I bought a charger package at the same time which came with a whopping 1.5 amp hour battery, which is good for basically nothing with a high power demand.

It lasts only a couple of minutes on our chainsaw. In other words, absolutely useless for the chainsaw, and if you are going down this path, you need a good battery too (4 – 5 amp hour is preferable).

As we run a little inverter in the vehicle, I can charge the batteries using the normal 240V charger with very little effort. The 1.5 amp hour battery is fine for a drill, or fan, but nothing high powered.

Another thing that you need to be aware of is the age and performance of the battery. Some of the Ryobi gear uses a lot of power (like the chainsaw, or especially if its brushless) and if you put an older battery in that has had a hard life, you will find that it just stops cutting mid cut. This is usually when you apply more pressure, and I assume that the battery can’t supply the extra current that the chainsaw wants, so it ‘trips’ out.

To fix it, you just unplug the battery and plug it back into the device, but its an inconvenience at best when you are part way through a cut. 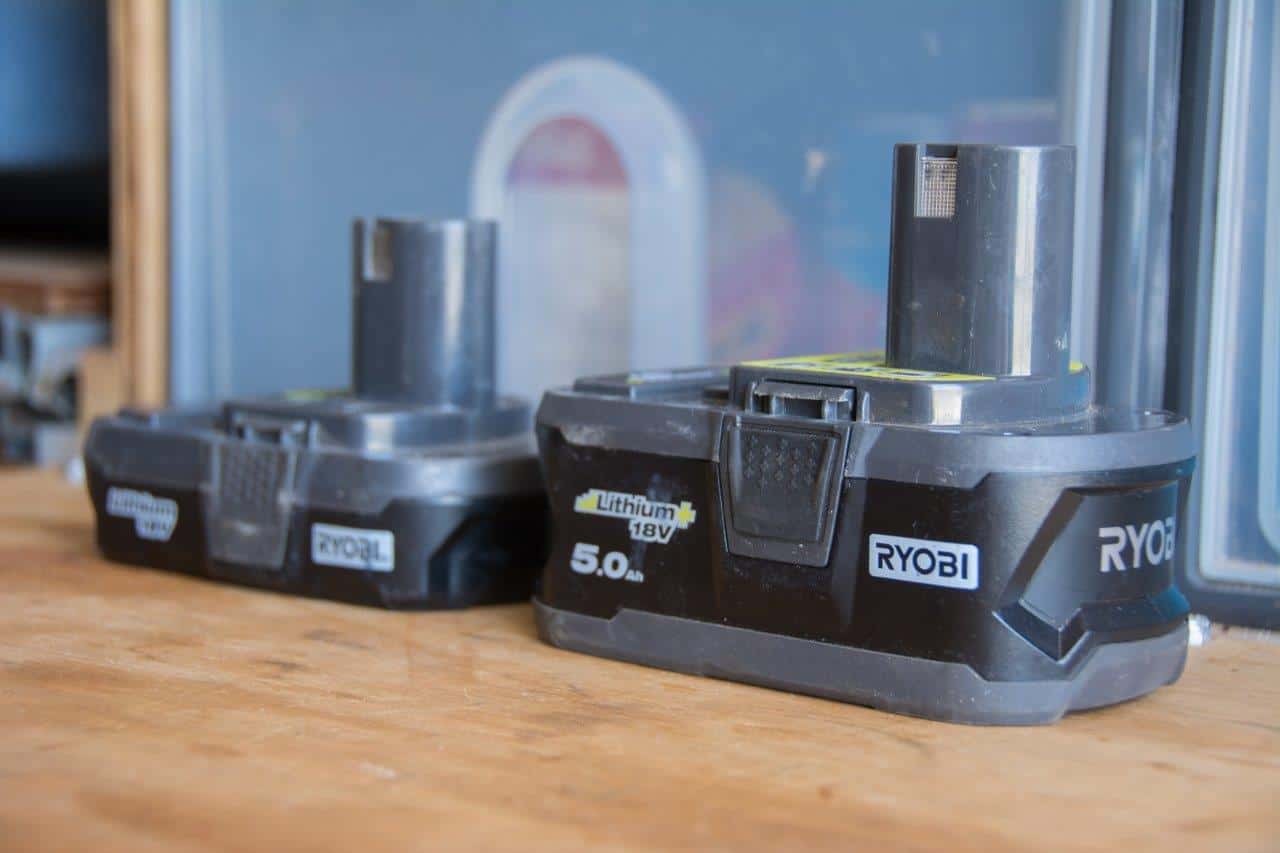 A quality 4 or 5 amp hour battery is a must

How does the Ryobi 18V Chainsaw perform?

As of today, the performance of an 18V chainsaw is not going to compete with a proper fuel driven one. The physics are just not there. However, I did read someone’s comment about the unit I bought that the chain speed was about the same as a low end petrol saw, and that instilled some confidence.

I’ve used the Ryobi Chainsaw a fair bit now. I use it only to cut logs into lengths that are easy enough to walk with, and let the fire do the rest. I don’t push it down hard; just let the motor do its thing kindly and gently and it cuts surprisingly well. Anything up to about 200mm is fairly easy to cut through, and you can do larger bits of timber, but its much harder.

When I went to a new 5 amp hour 18V battery, it was a game changer. It never stops anymore, and has a lot more grunt than before. 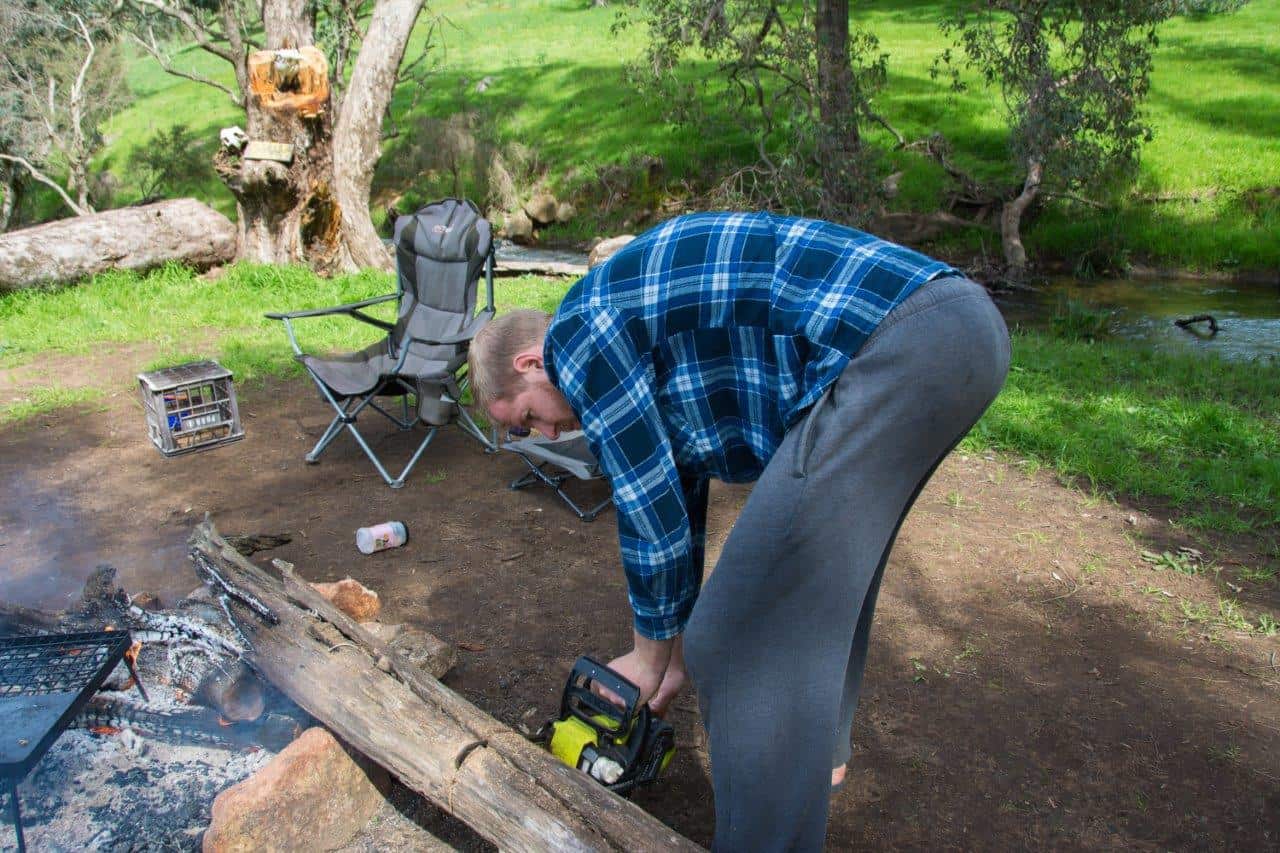 About the Ryobi 18V Brushless chainsaw

This unit has an auto chain lube system, and a quick chain tensioning knob. You don’t have to adjust how much oil goes in; it just does its thing. The tensioner is super easy to use – undo the locking ring, tighten the internal knob and do the locking ring back up again. No tools needed, and it can be done in under 10 seconds.

It’s also got the kick back guard, can’t be easily started by a child (due to multiple movements needed) and is very quiet. It’s not quiet enough to use very close to other neighbours when they sleep, but if its during the day you’d hardly hear it from 100 metres away, and that’s impressive when you compare it to a petrol version!

I keep ours wrapped in a rag in the back of the vehicle, and usually empty the chain oil out if its not going to be used again in the near future, as it leaks through slowly otherwise. 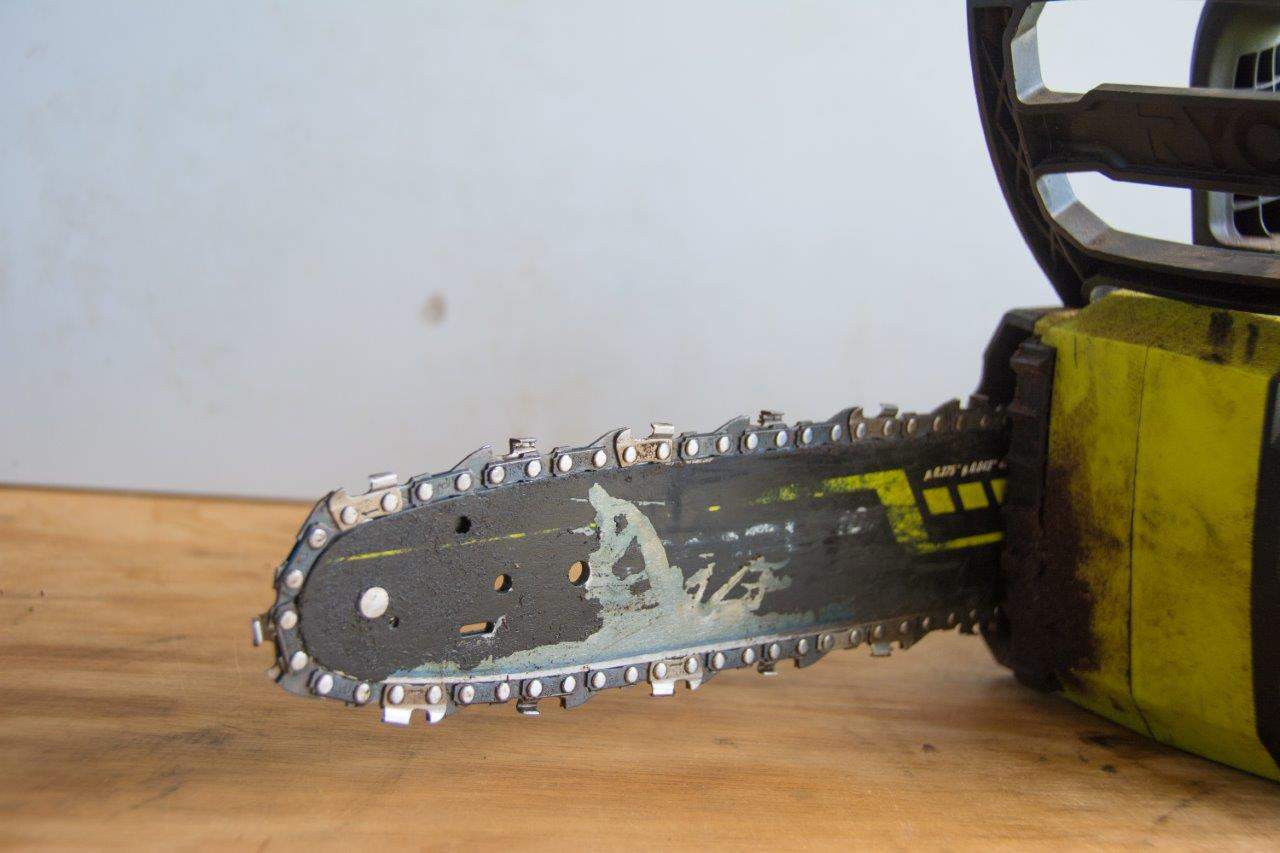 These work pretty well, considering what they are

Who else makes battery chainsaws?

If you are in the market for an 18V chainsaw, have a look at the Ryobi range, and most other brands are selling them as well. If you already have a toolkit with Makita, AEG, Hitachi, Dewalt, Bosch, Milwaukee or whoever it might be, look at their options too.

There are a few other brands that are doing battery powered chainsaws too; Stihl, Husqvarna, Black and Decker and Ozito, and they are all worth a look. 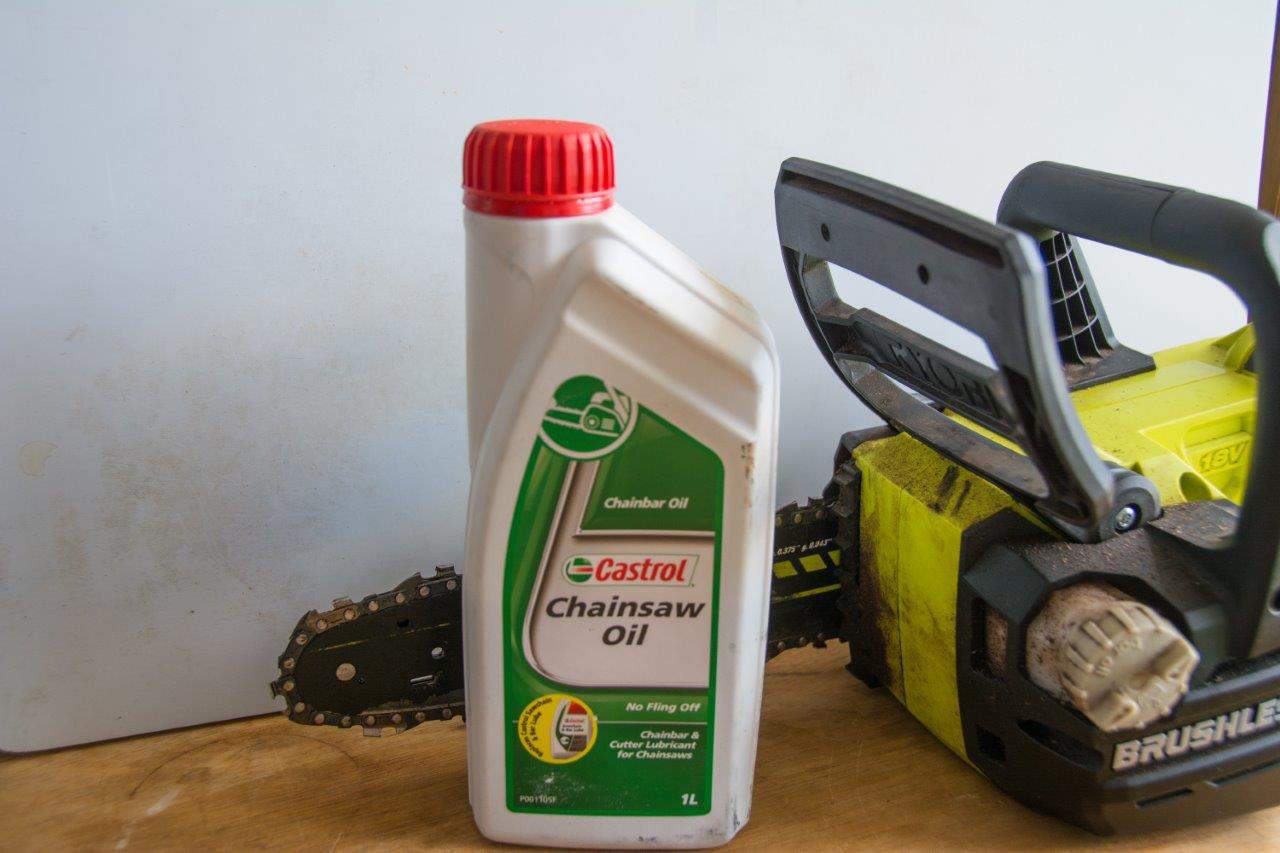 There’s plenty of battery powered chainsaws on the market today

EDIT – we’ve now had the Ryobi Brushless Chainsaw for more than 5 years, and used it quite a bit when travelling. It’s with us on our Big Lap of Australia, and still cuts really well (and we haven’t even sharpened it). I will say we have come across some real hard wood at times that it just struggles to bite into, but if you can get it to bite it will cut, but normally it works fine, and some of the higher voltage chainsaws today are absolutely amazing.

Now, with a toddler and 4 year old in tow and a fair bit of responsibility around camp, being able to wander into the bush for 10 minutes and come back with enough wood for the night without breaking much of a sweat is something I really value. I have better things to do than swing an axe, or use a manual saw for half an hour. Battery powered tools are going to become insanely popular in the future.

We’ve had this Ryobi cordless chainsaw now for 3 years now, and given it a fair work out. I did buy a chainsaw chain file, but its still pretty sharp and has never been used just yet. I’d comfortably tackle any bits of timber up to nearly 250mm in diameter, but on the larger logs you often have to cut from a couple of different directions.

I do find that there are times where the Ryobi battery chainsaw chain doesn’t seem to ‘bite’ into the wood, and it can require a bit of adjustment in pressure, or angle to get it started. Once it takes off though, it cuts well. I am not exactly sure why it does this; its almost like the bar is slightly too wide and stops the chain from properly attacking the timber.

You can use this chainsaw at home for doing odds and ends, but I wouldn’t want to use it for chopping big trees down. It’s safe, light weight, doesn’t take up much room and self oils. I’m happy with it, and despite being unsure of whether it was worth it or not, I’m very pleased with it.

I’d get one again, and don’t feel so guilty about spending a good chunk of money on something to get Camping firewood! It lives in the back of our Isuzu Dmax, and gets a work out a lot in winter time! If you are looking for a Ryobi chainsaw review, put this down as a positive one from us.

What do you use to get firewood for camping? 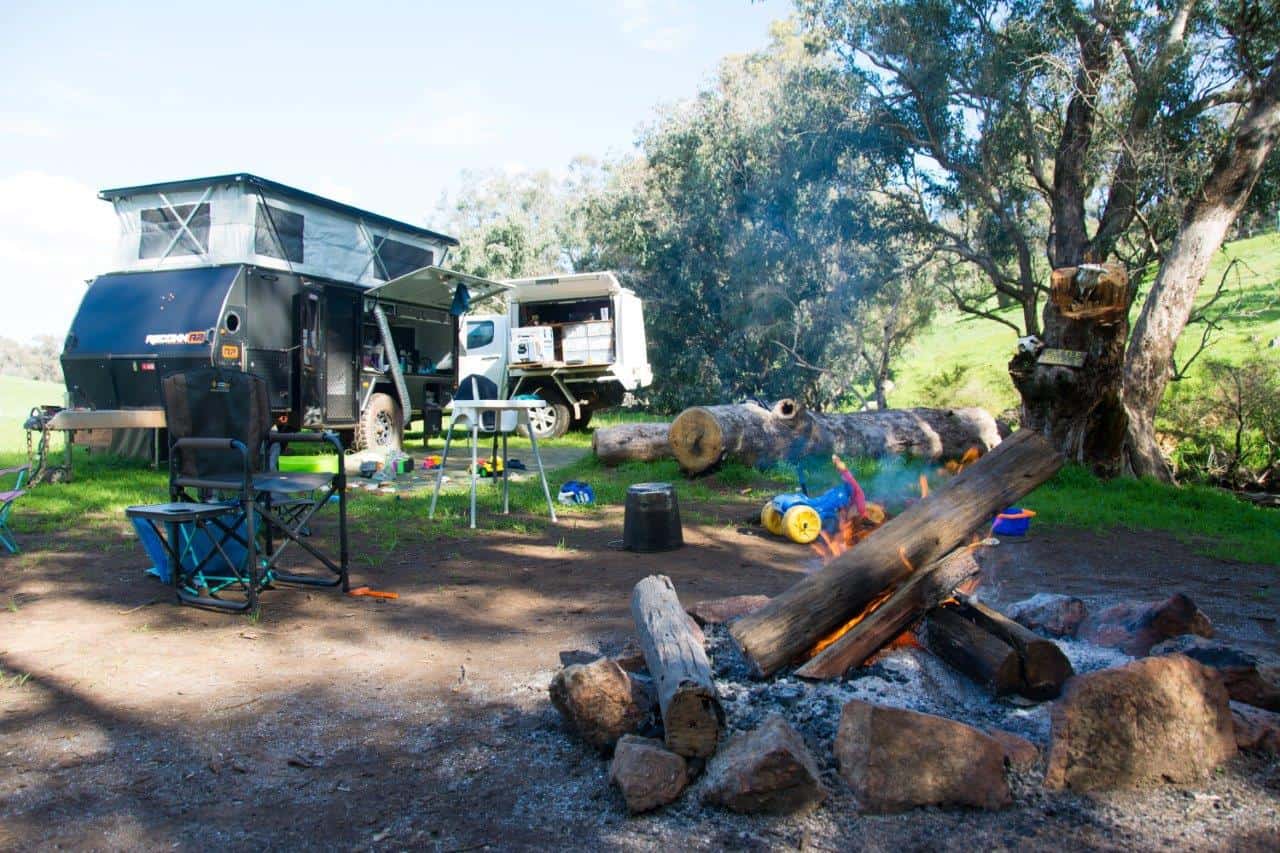 Getting decent wood to a fire is super easy now