Last time we travelled from Perth to Newman we did it in just over a day, leaving at 3AM and pulling up a hundred kilometres short of Newman late in the afternoon, before getting up the next day to finish it off.

These days, we have young kids and the idea of spending any more than 6 hours in the vehicle with them is pushing our luck, so we spread things out more.

I’ll be honest though, its actually far more enjoyable for us too (except its dragged out!). On our most recent trip from Perth to the Pilbara, we committed to staying in a number of different sites on the way up, and the first was White Wells Rest Area. 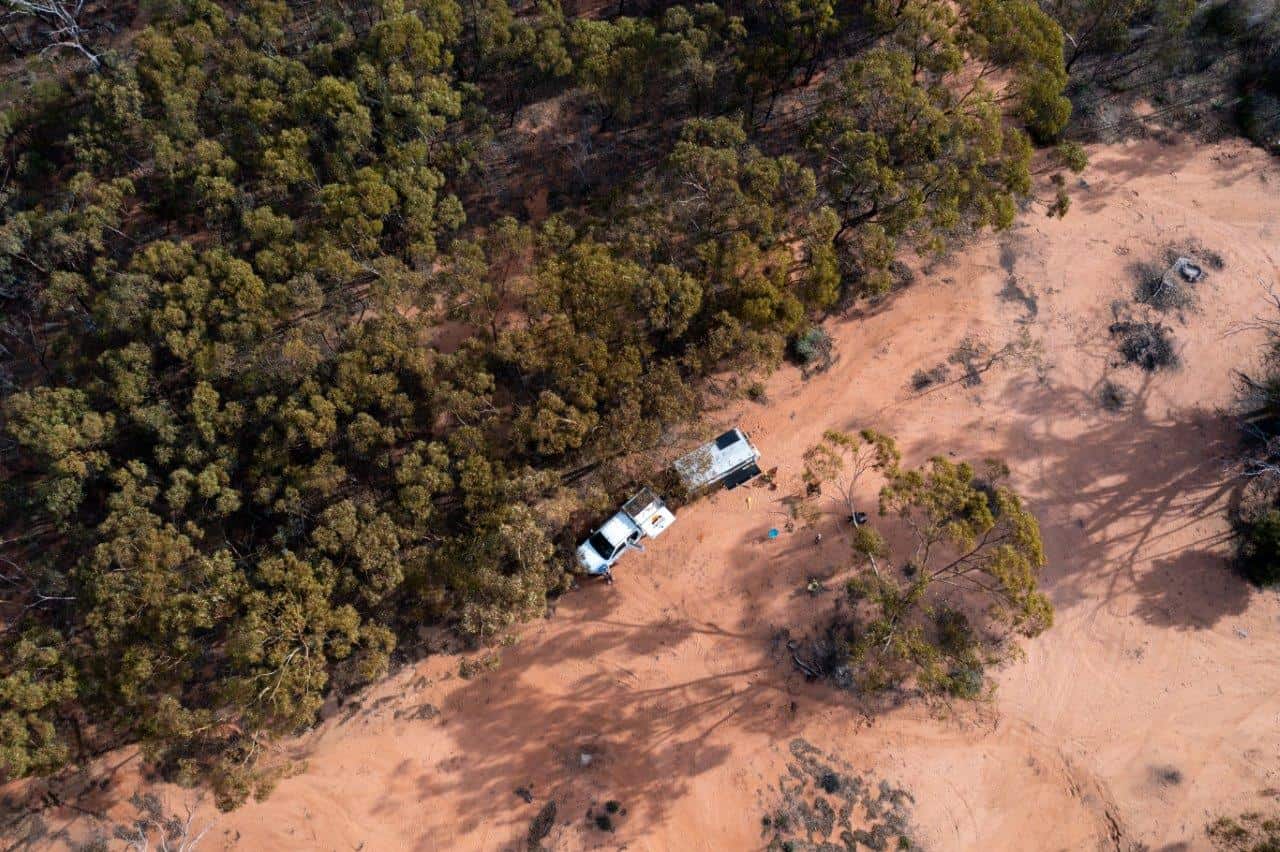 Our camp site for the night at White Wells Rest Area

We left Perth at about 9:30AM, after fitting our new rear awning took much longer than I had anticipated (due to our original solar panel install), and headed up the north link. If you haven’t done this before, it’s a fantastic piece of new road, and we’ll be taking it every day of the week over the Indian Ocean Road.

If you don’t turn off it, you’ll head out via Toodyay and Wubin, and then eventually get to White Wells Rest Area.

Apparently the signs have been removed, and it just looks like a normal parking bay with the big blue P sign out the front, but it extends well beyond the usual pull in bay. There’s a number of tracks that head out away from the highway, and we headed out as far as we could get, and picked a spot in a big open area. 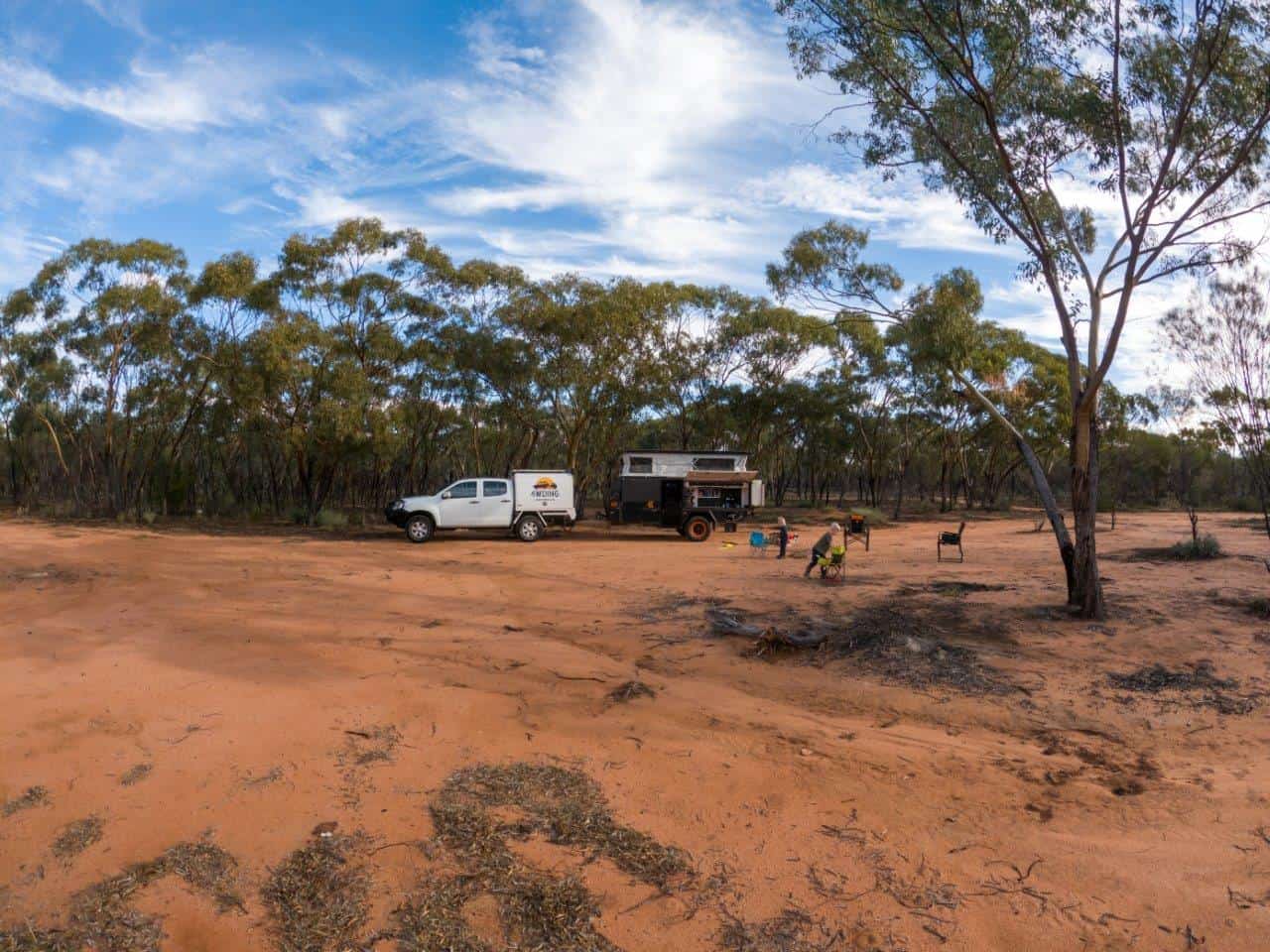 There’s plenty of room around

The actual ‘well’ is a fenced off area near the pull in bay, and there’s a heap of other water pools around if you are prepared to look. 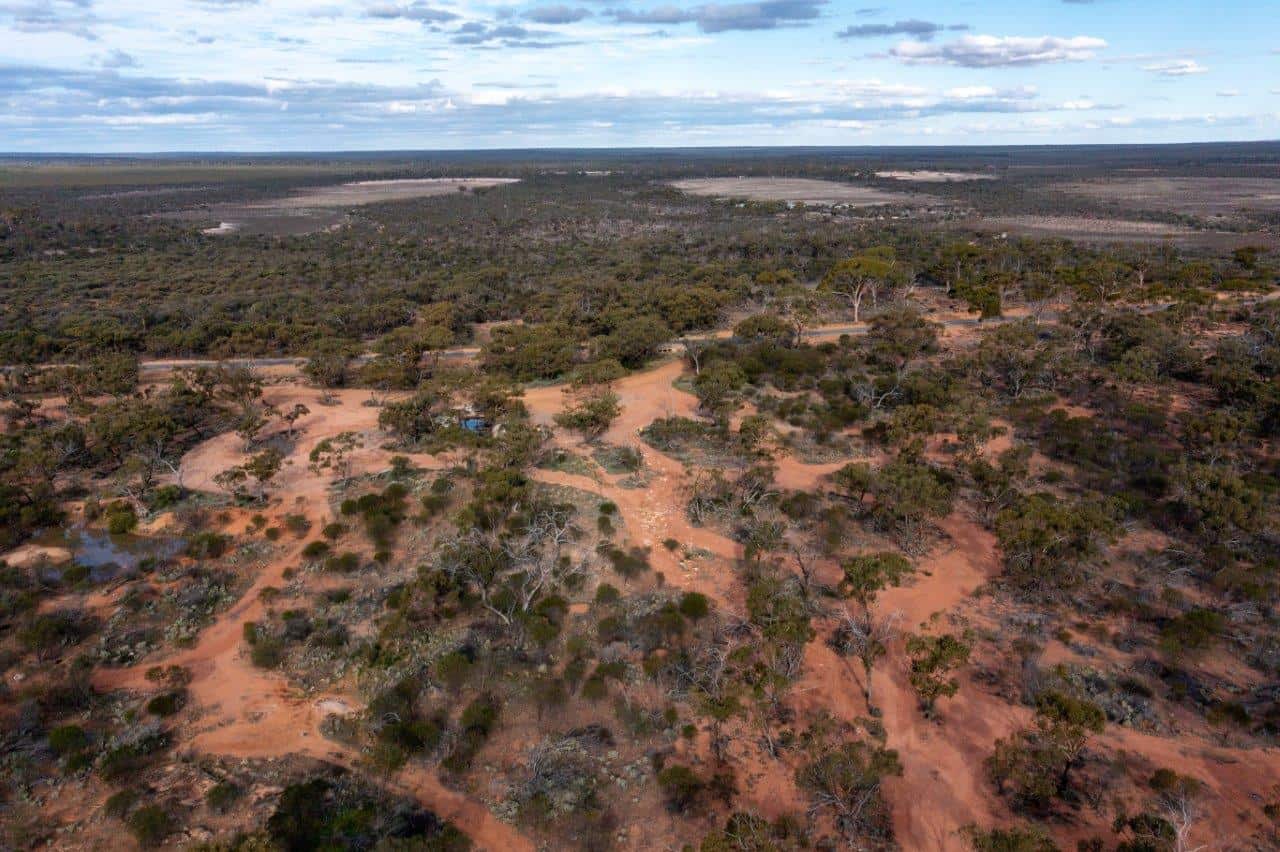 It’s a big area off the road

Head to the rocks

We’d read of granite rocks being in the area, and saw a sign pointing to them, but despite wandering around we couldn’t seem to find where they were. Out came the drone, and a quick flight up from camp made me realise how close we’d missed them by. We would have been about 20 metres away but couldn’t see them. If you head west, you’ll bump into them. 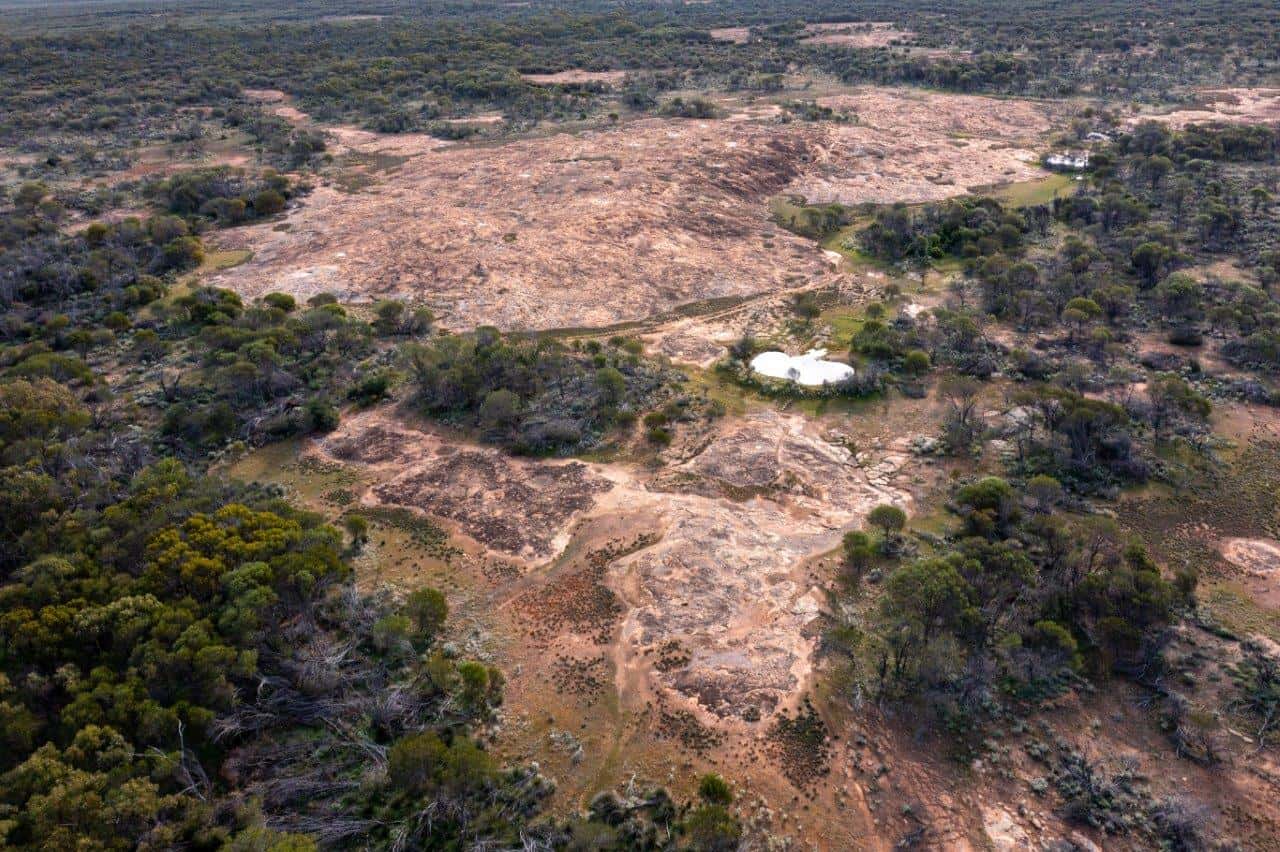 The rocks are huge

There’s a small rock to the south (in terms of height), and then a much larger one to the north which is worth a walk on. We could see a couple of big pools of water, along with the many rock pools that the kids enjoyed splashing in, and looking for animals. 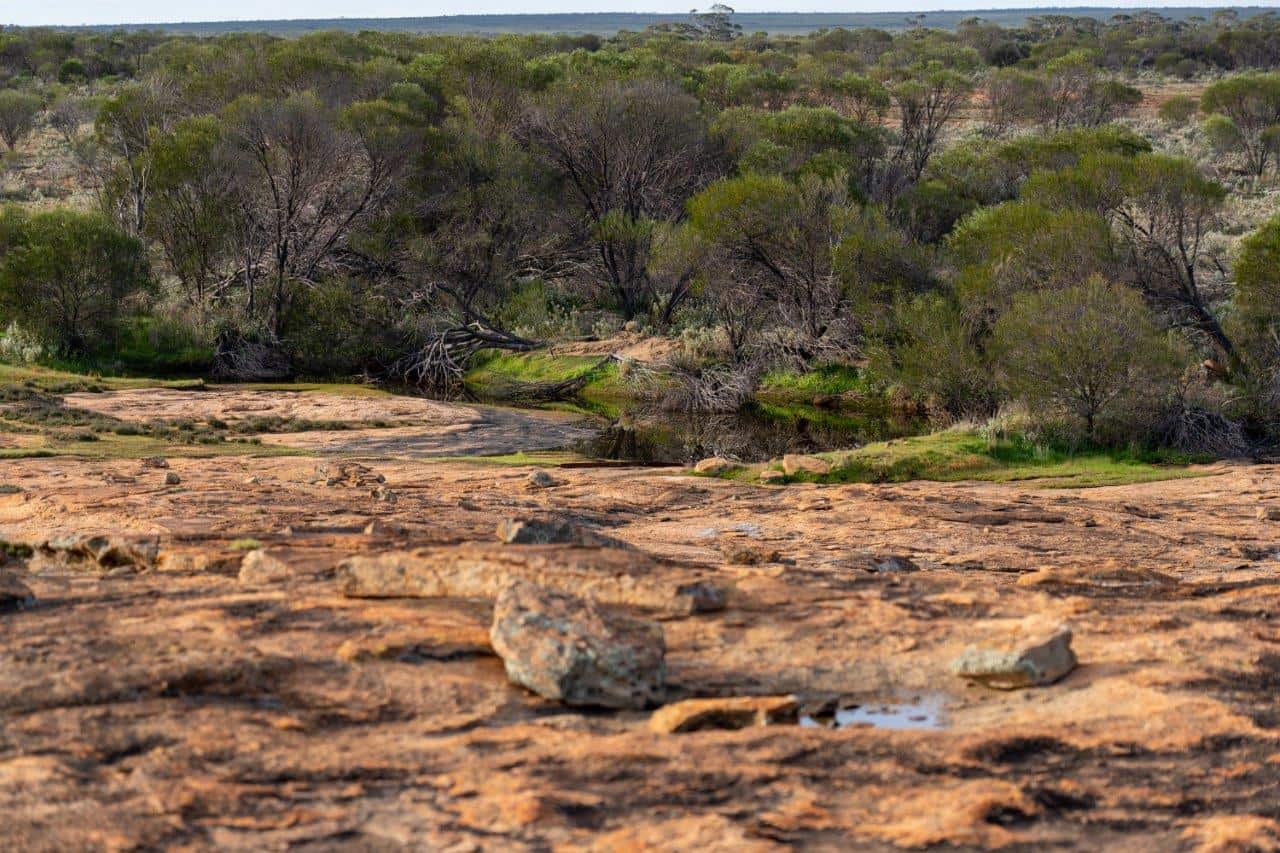 There was plenty of water around

This site is completely free. Its just a bush camp, and is quite close to the highway, but you don’t pay a cent. 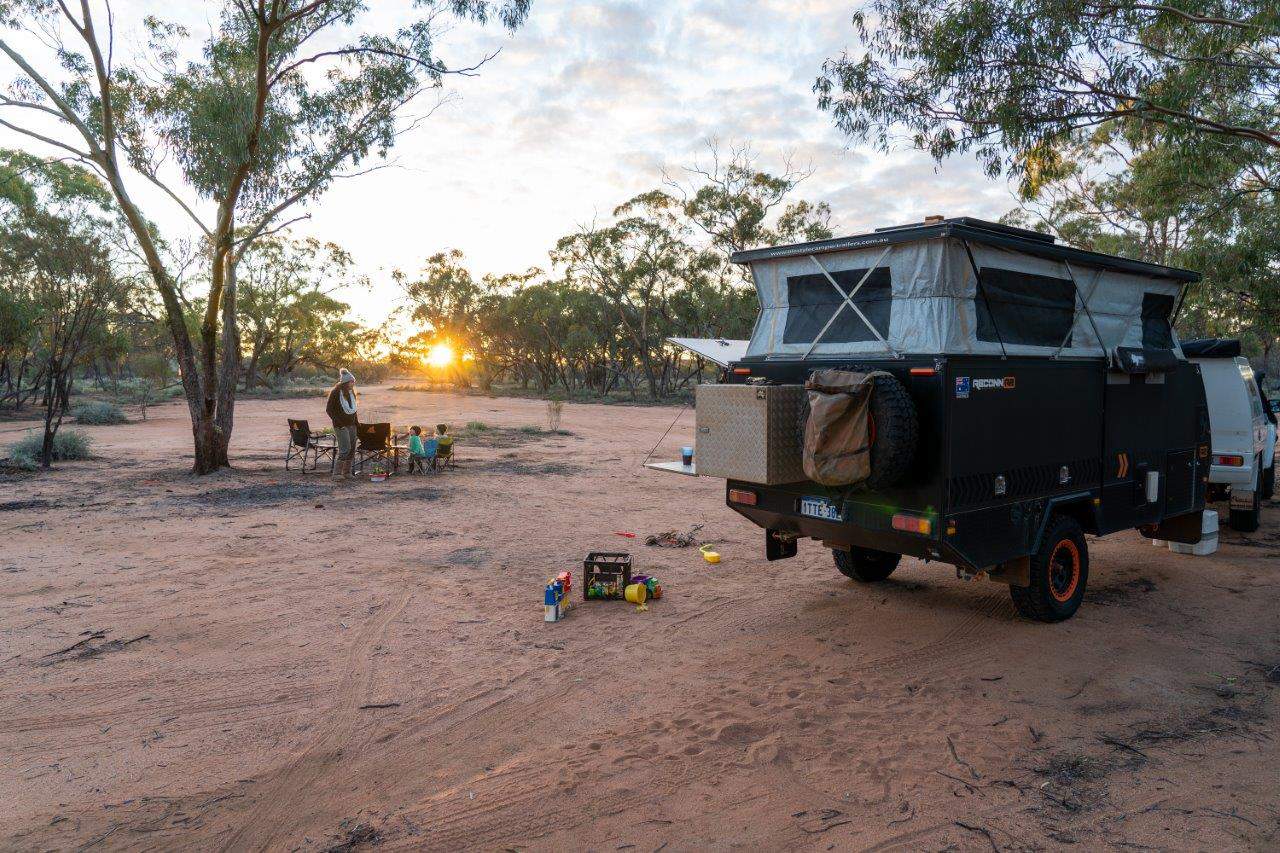 This site is completely free

There’s rubbish bins here, a couple of tables and plenty of room to have a fire in season. I don’t recall seeing any toilets here though.

You’d have no issues getting bigger rigs into here, and if you had limited clearance you could stay in the main pull off area. If you have a bit of clearance you can head away from the highway, and find yourself a little slice of privacy.

You’ll still hear the road noise, but its not too bad once the sun goes down. 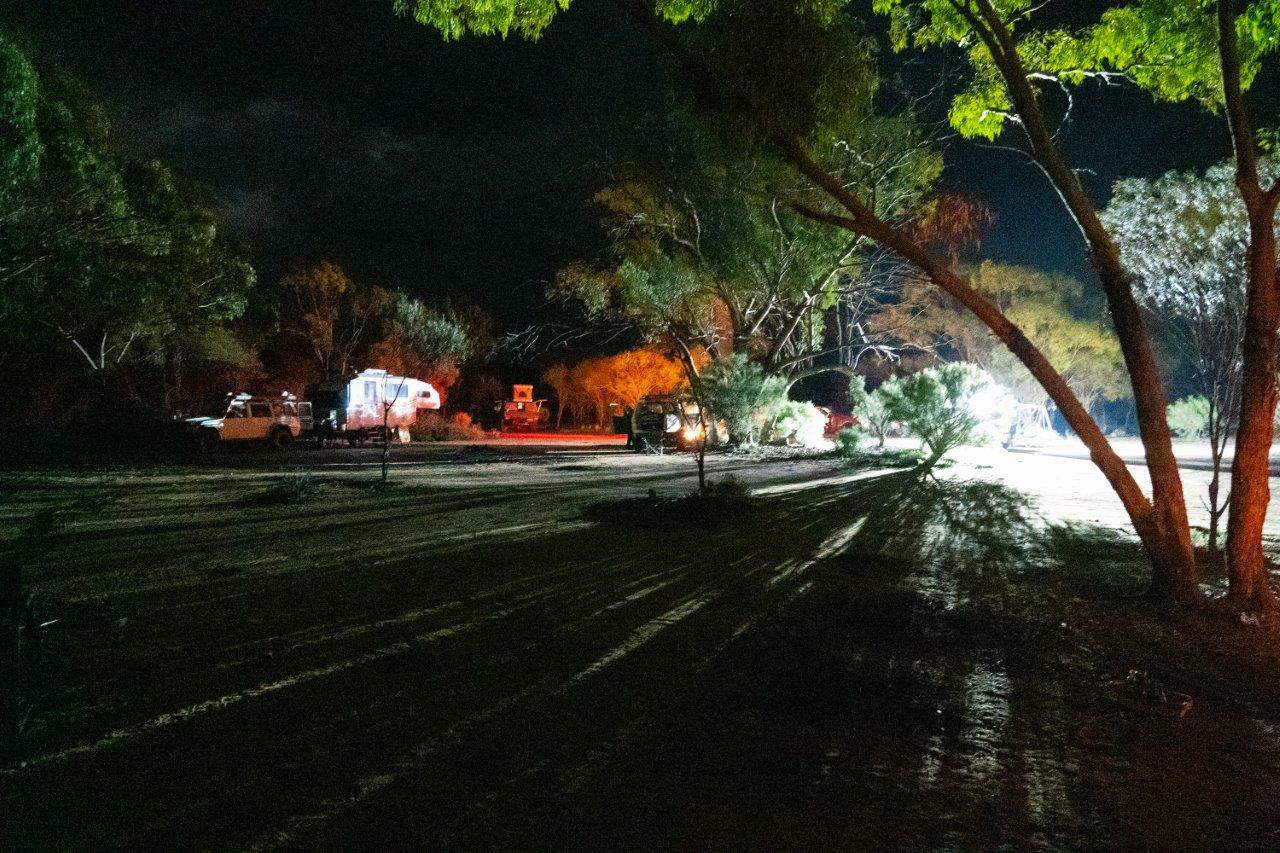 There’s plenty of room for all types of rigs

I was quite disappointed to see the amount of rubbish laying around here. There’s evidence of a few burnt out cars, but plenty of toilet paper and bottles, and most frustrating is random things people have dumped; old fluid containers, buckets and random bits and pieces.

As we travelled further north the rubbish reduced, and it seems to be where lots of people visit, but its still atrocious and not acceptable. Leave no trace. It’s really not hard. 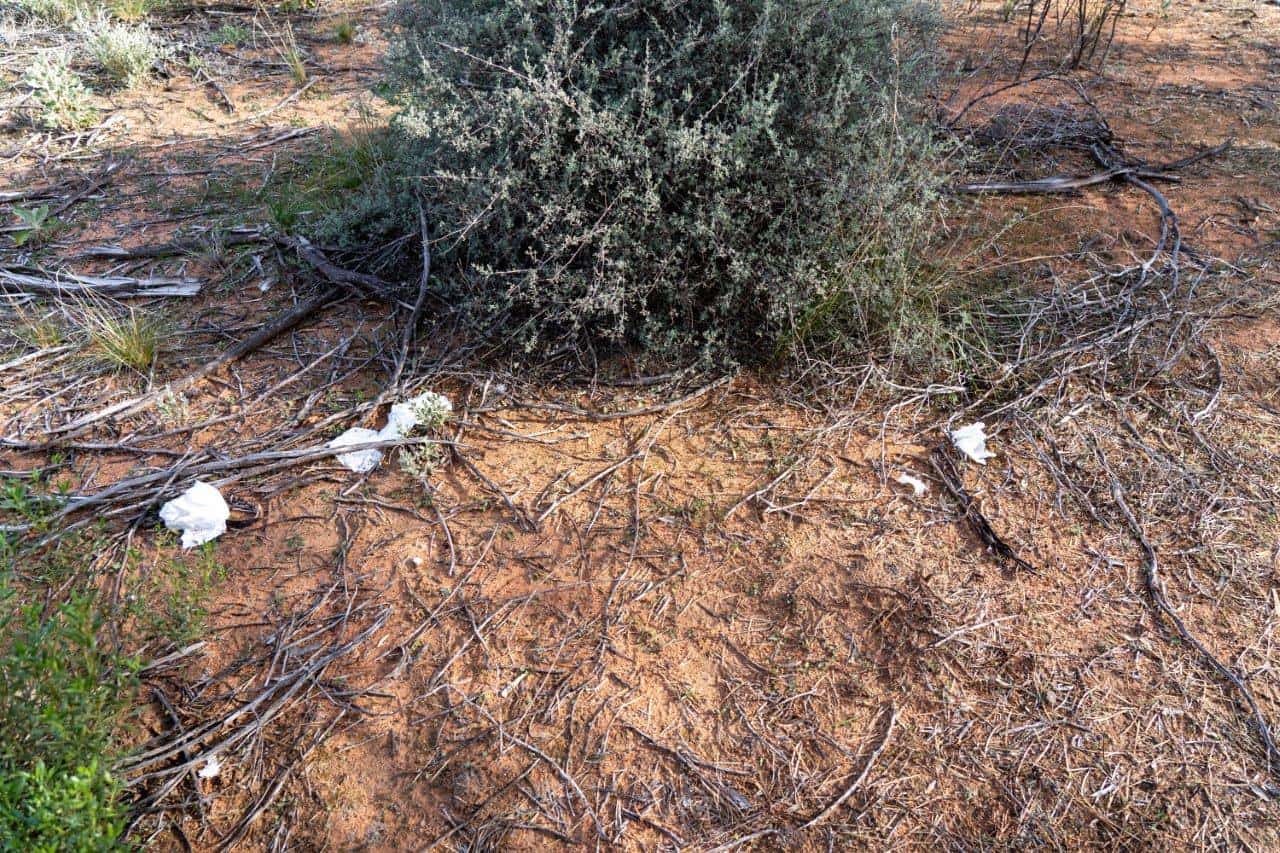 Don’t be a grub; take everything with you 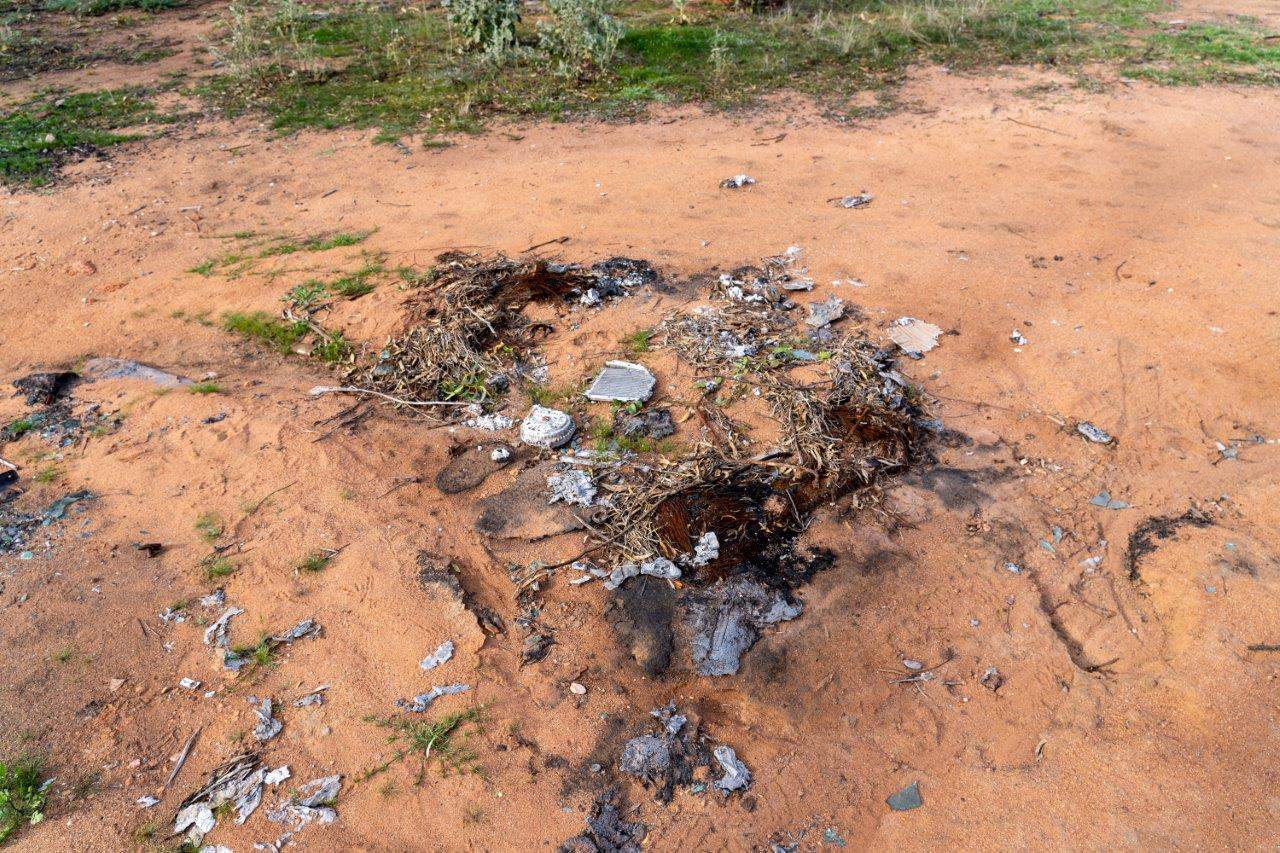 Remnants of a burnt out car

I didn’t see anything about Dogs, and assume you’d be perfectly fine to bring them here. We had a nice fire, and as long as you are sensible about it; don’t cut tree’s down, or leave rubbish around, or throw cans and beer bottles into them, enjoy it.

We did make a point of using an already used fire mound, as you end up with a million fire locations in a small area that looks pretty average. 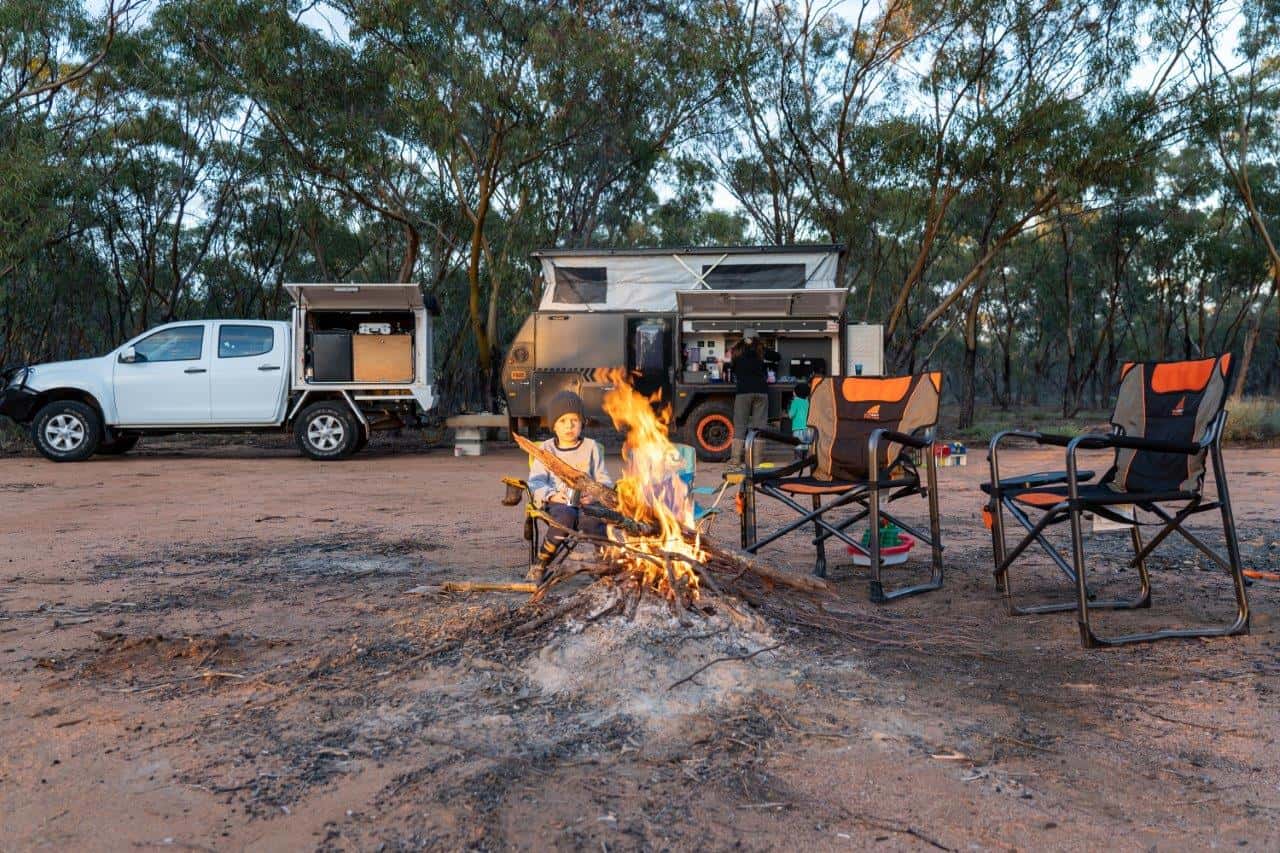 It can get quite chilly here

We got bitten a number of times by sand flies, which was surprising. Normally we’ve only had issues near the coast, but I saw several of them on me, and could feel them biting. If you haven’t been bitten by sand flies before, you’re lucky; they are nasty little critters!

We always enjoy wandering around and checking the bird life out. On this afternoon we saw a number of black cockatoos, which are always welcome! 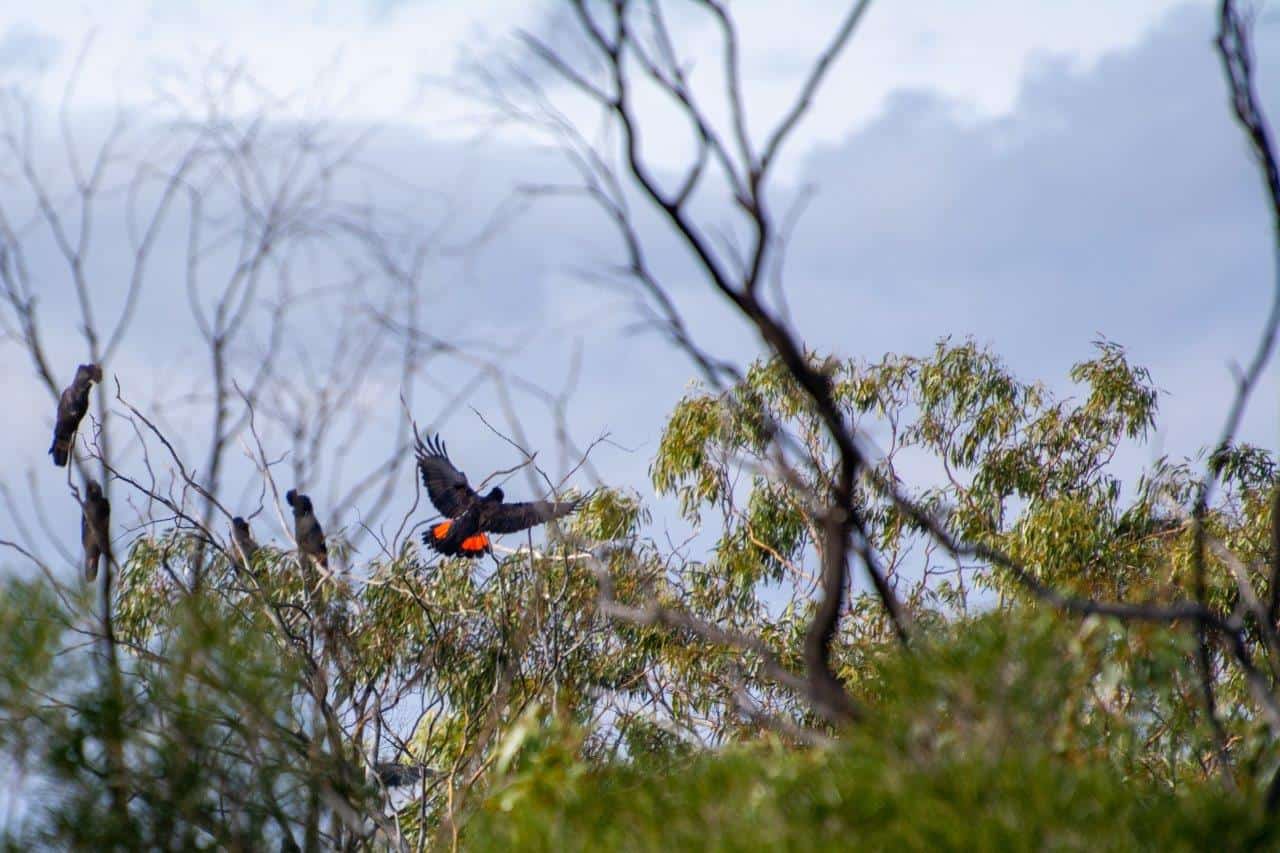 We had some lovely visitors 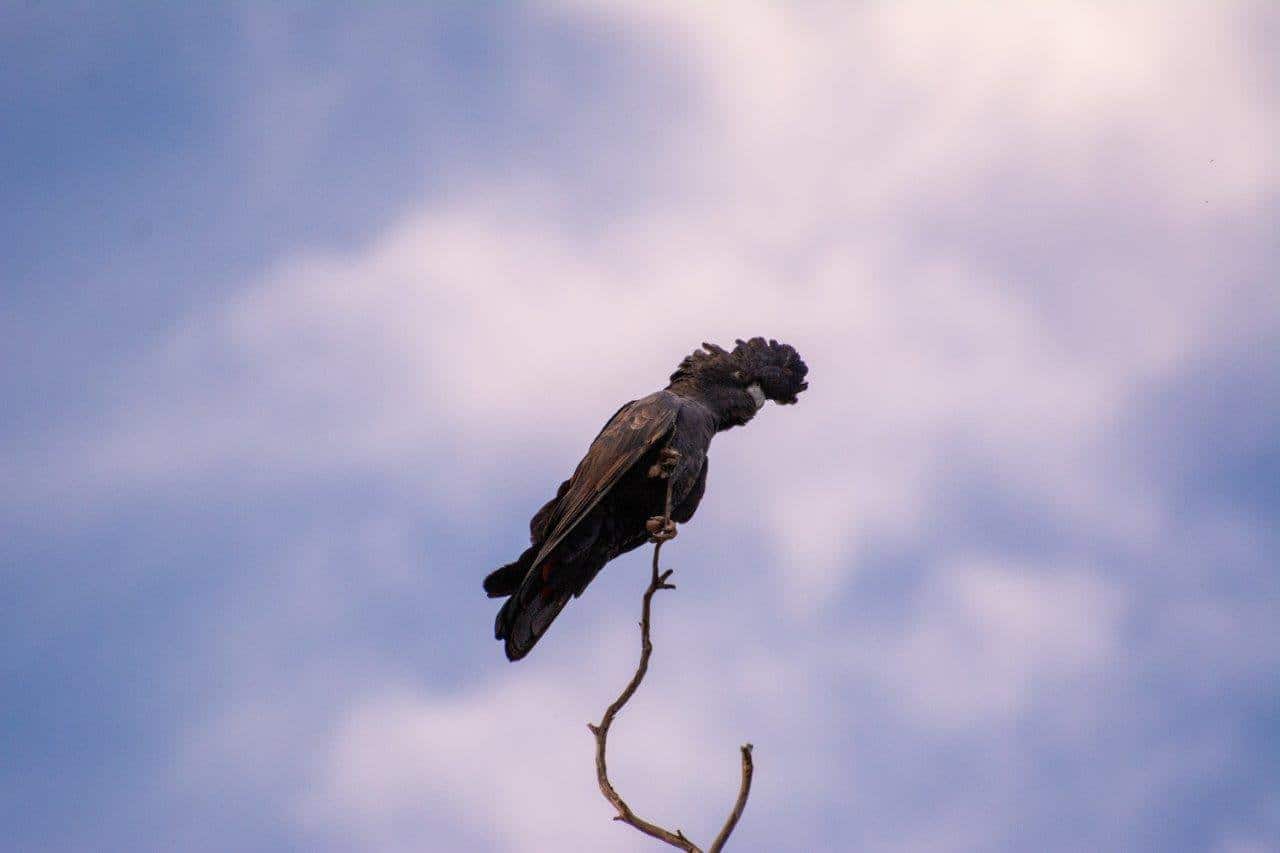 Some of them were less flighty

Overall, the camp site isn’t anything special, but when you are travelling up and down you really don’t need anything better. The rocks were well and truly worth a walk, and the place was used by quite a few people on that particular night.

We’d stop here again, and whilst we wouldn’t make it a destination to visit you can’t go too wrong!