After a magic day and night at Wauraltee Beach on the West side of the Yorke Peninsula, we woke to the wind blowing up, and knew it wasn’t going to get any better on that side for almost a week, so we packed up and headed to the East side, to a nice camp site called Parara Campground.

We weren’t expecting good weather there for the afternoon either, but it would be better than getting hammered by on shore winds at Wauraltee, so we made the move. 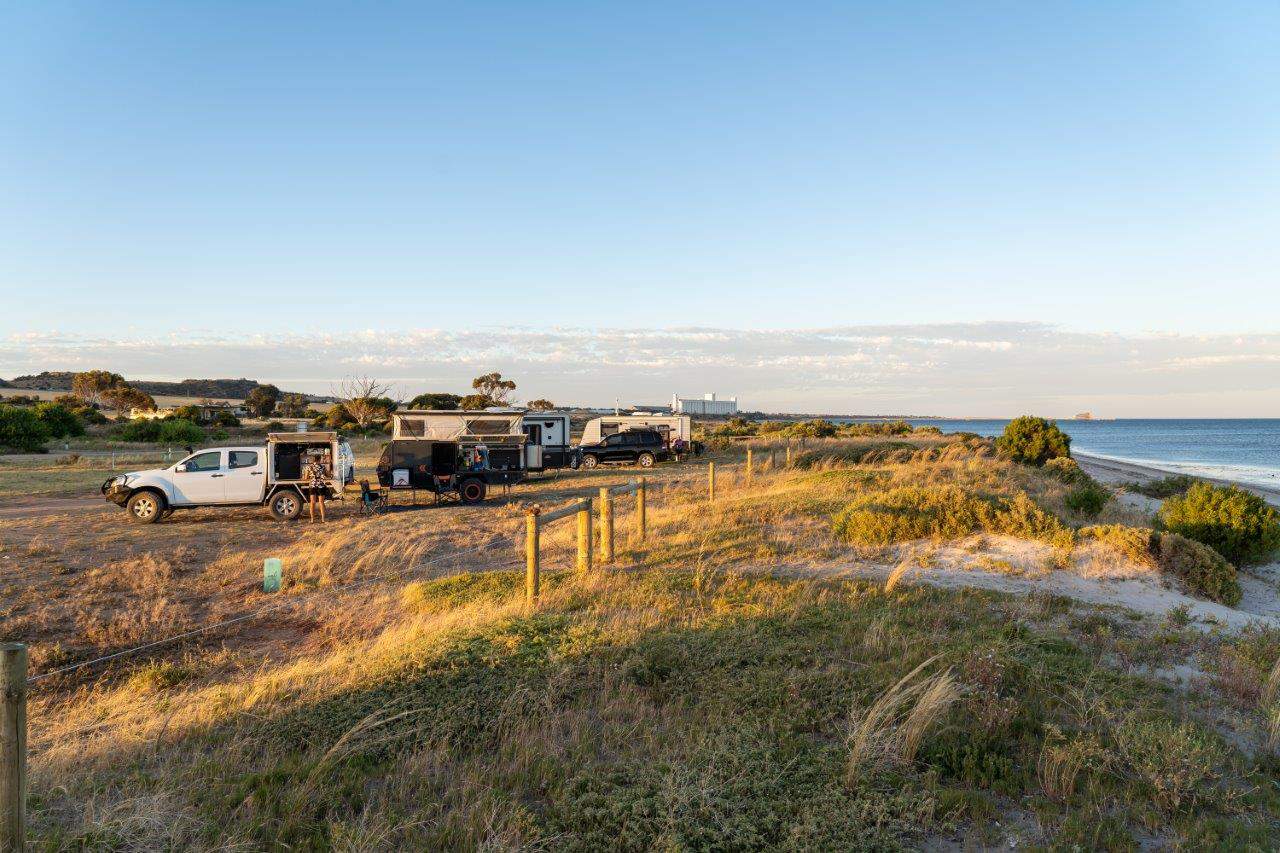 Where is Parara Campground?

As mentioned above, Parara Campground is on the Eastern side of the Yorke Peninsula, a few minutes drive south of Ardrossan, and roughly in between Clinton and Port Vincent. It’s at the end of a short, gravel road that takes you right down near the gulf. 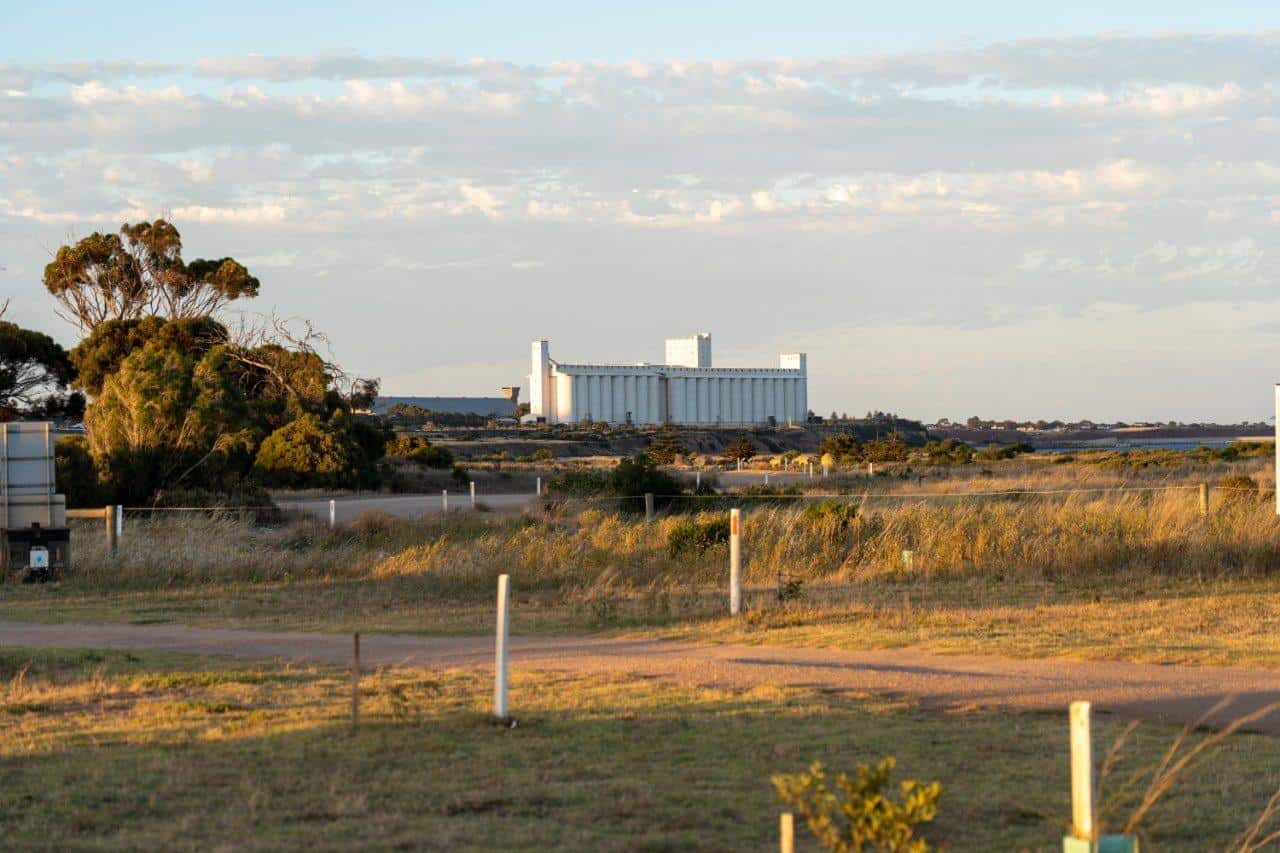 You can see the Ardrossan silo’s from camp very clearly

Parara Campground has a drop toilet, and that’s it. It’s another Yorke Peninsula shire campground that you can book online for, and stay at any of them for that particular night. 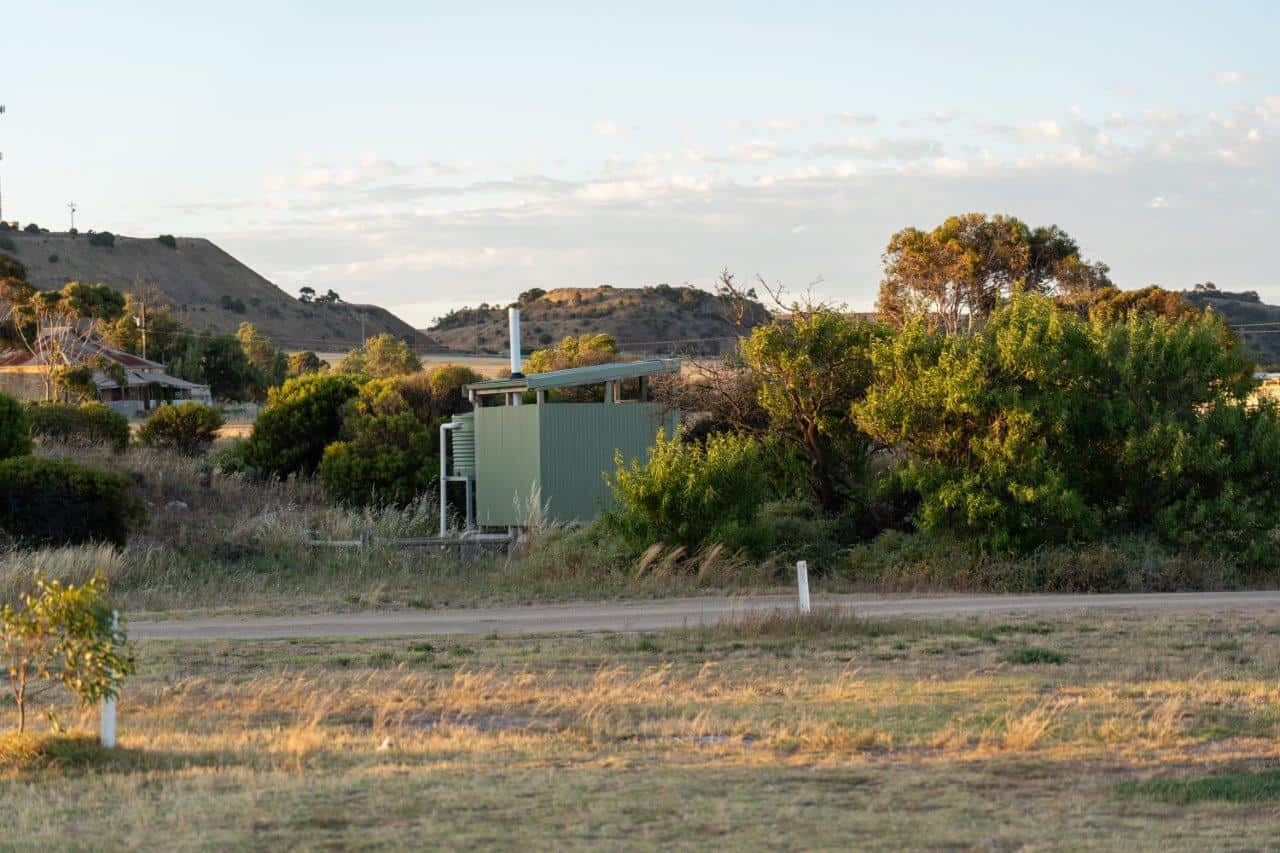 Parara Campground has a toilet, which was OK, but not that nice

What does it cost to stay at Parara Campground?

It’s $20 a night to stay here, or you can purchase a 7 day camping permit for $100, a monthly one for $300, or a yearly one for $1000. This has recently been increased from $10, and whilst its not unreasonable, its not that much cheaper than camping at the Adrossan Caravan Park (or you can stay for free at the RV park in town). 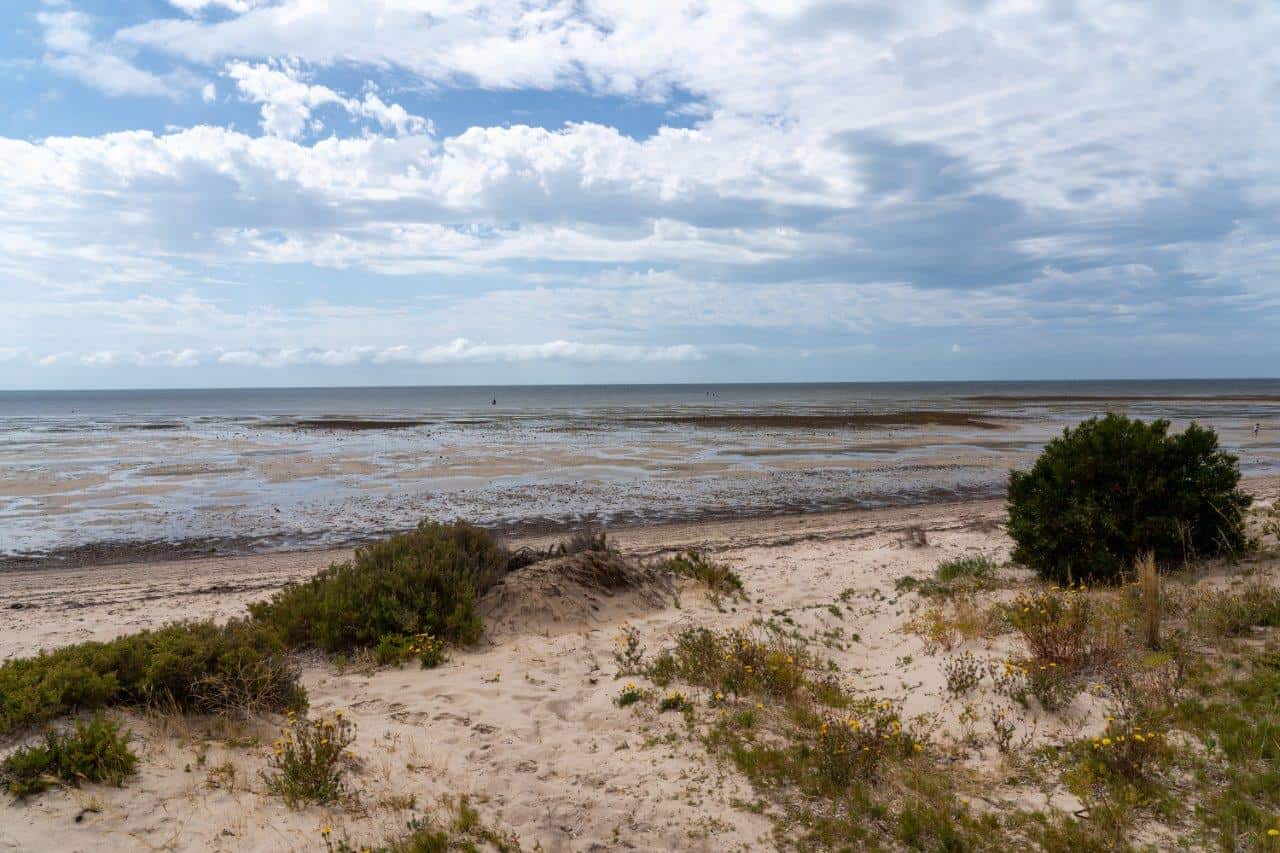 Crabbing at Parara and Adrossan

The Ardrossan area is well known for catching Blue Manna Crabs, and whilst we are familiar with catching them in Western Australia, we hadn’t done much in South Australia. In fact, we use scoop nets over there, and when my folks headed out from Parara Campground with a small aluminium pole, and a scoop net (just after a local came back in with none), I didn’t have high hopes. 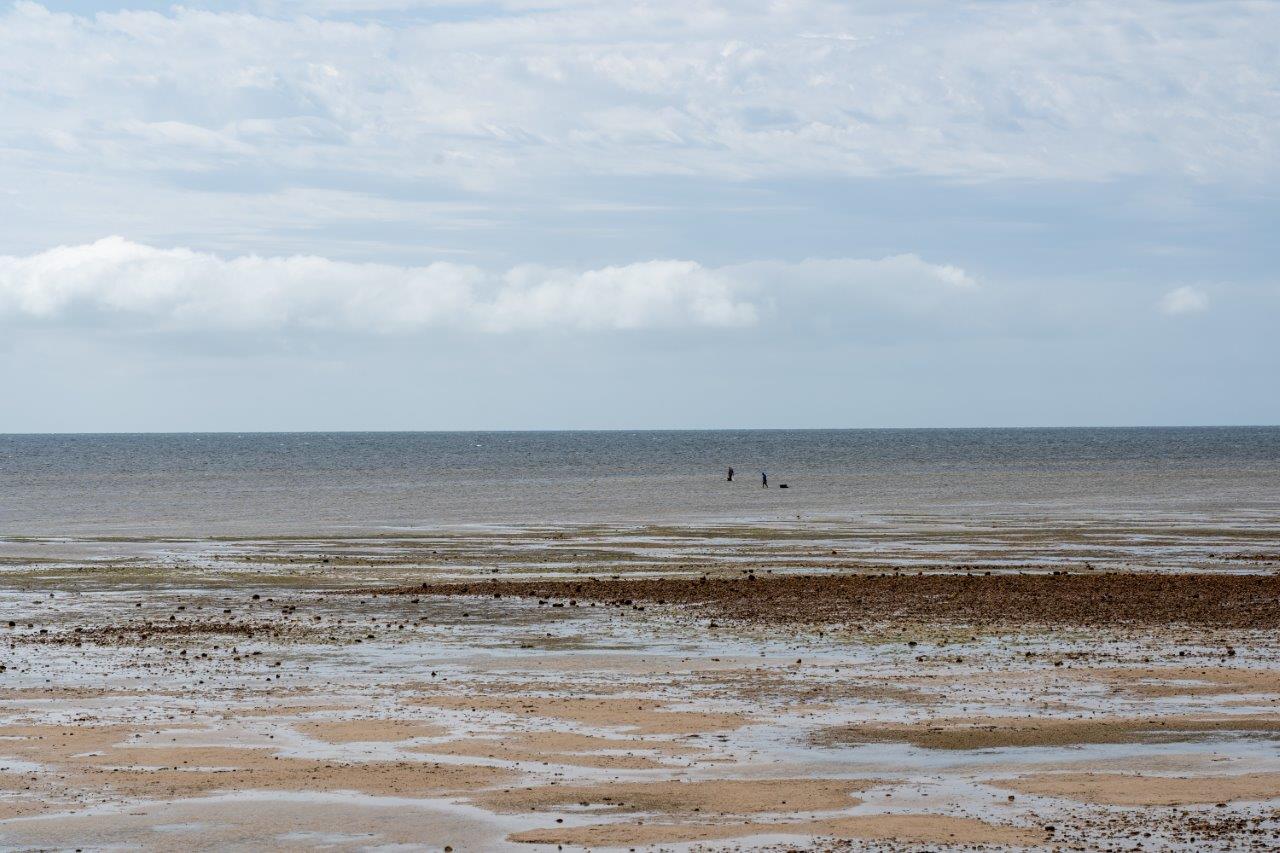 Parara Campground is a popular place for crabbing

An hour or so later though, and they walked back in with a tub that had 11 decent size crabs in it, so its entirely possible. 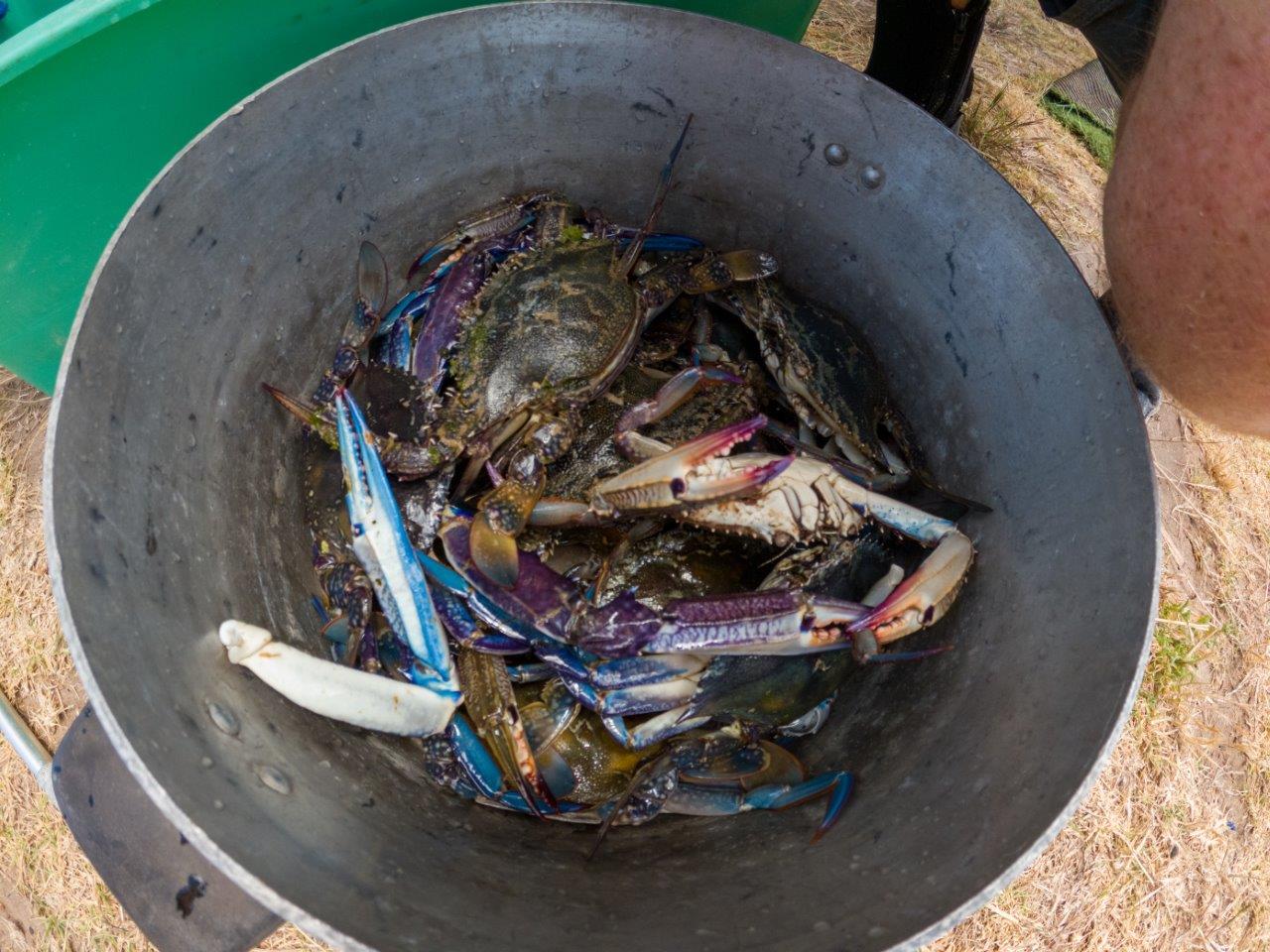 I was quite impressed with Ardrossan. There’s a bit of history here, a nice playground for the kids and the red cliffs and jetty are actually really pretty. We drove up the lookout over the grain storage and had a good look (despite it blowing a gale), and also headed out to the beach just north of Ardrossan. 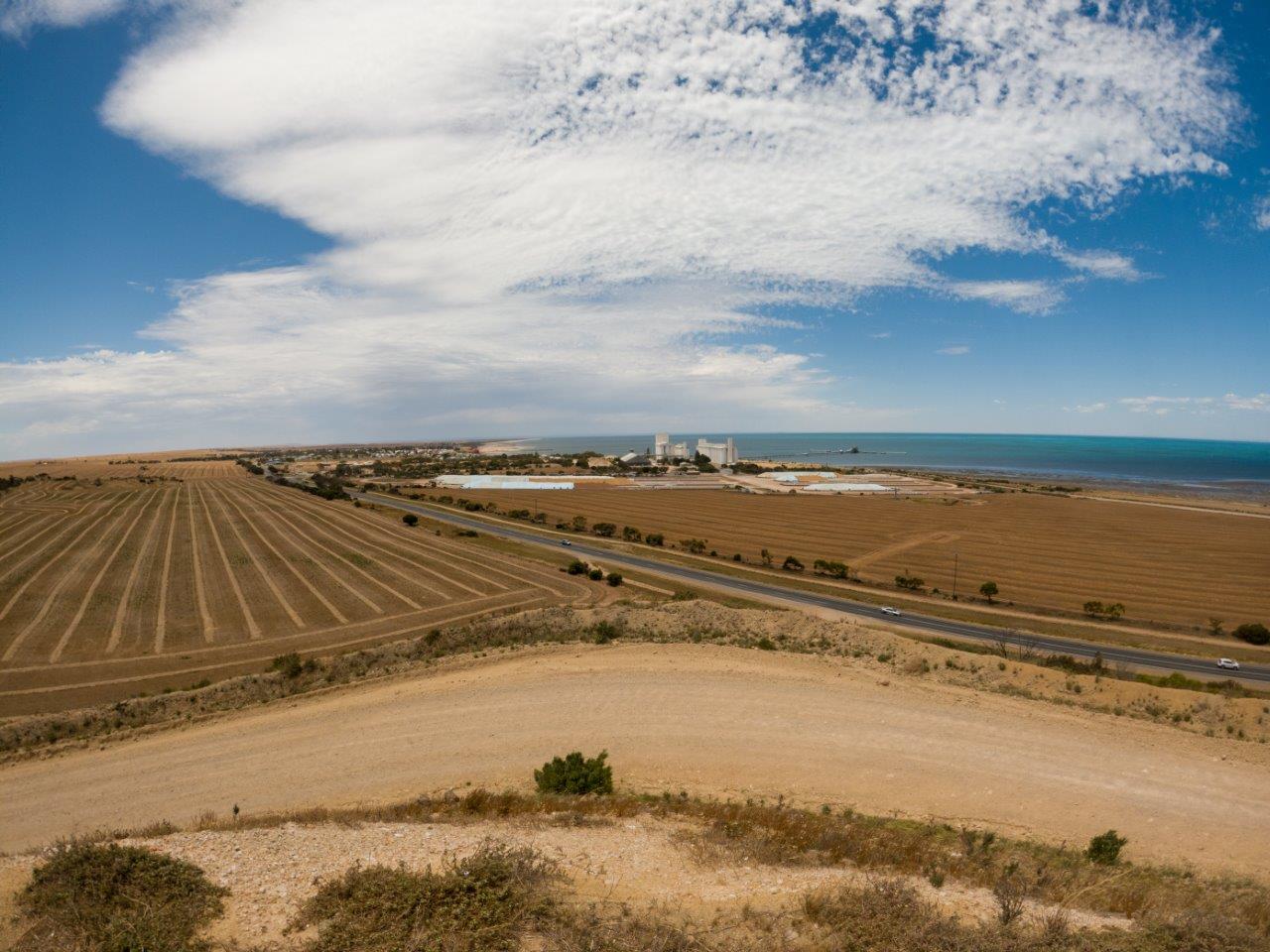 The lookout over Adrossan was pretty good, right near Parara Campground 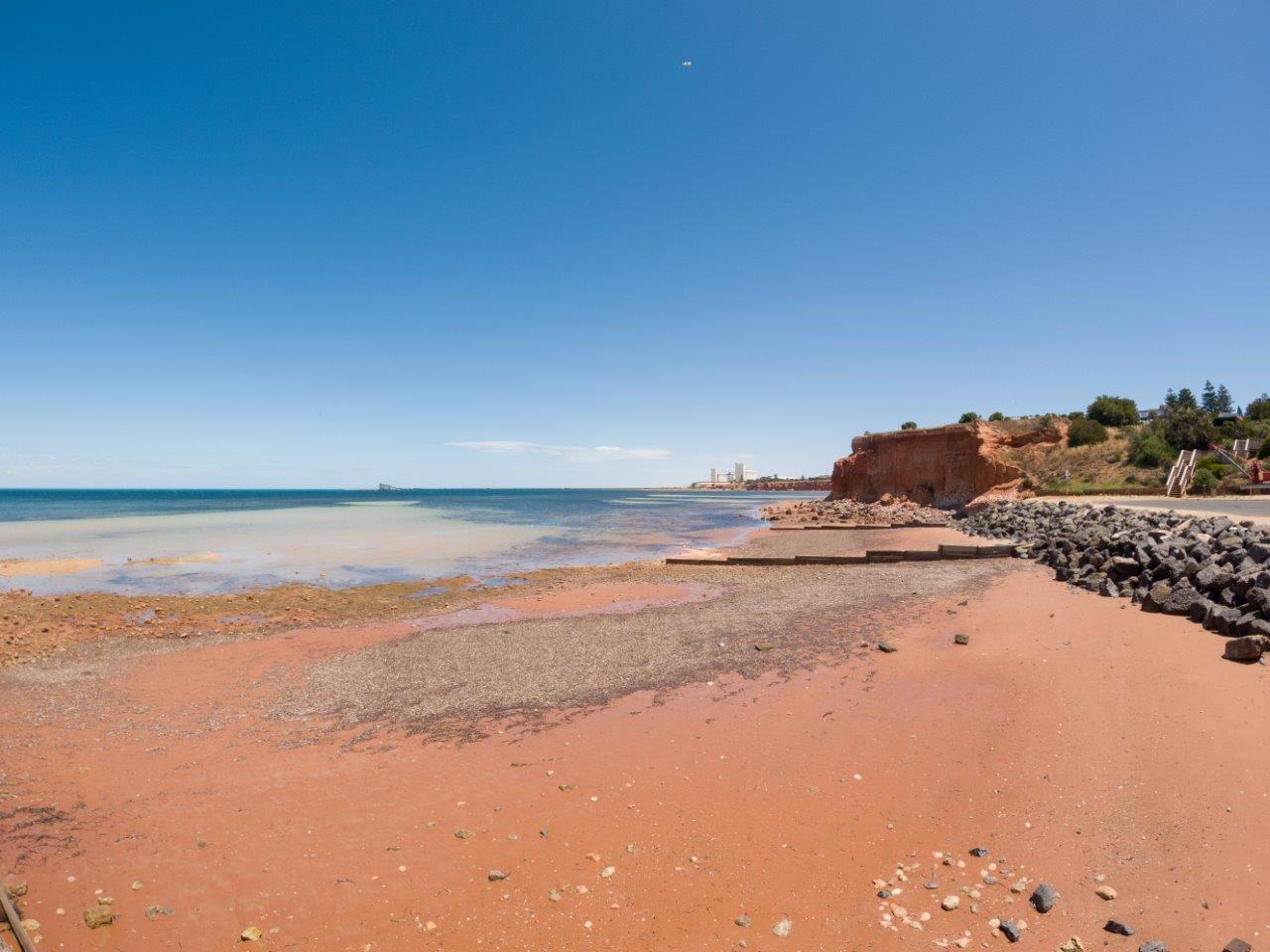 The views around Ardrossan are really nice

Right near camp is a whale memorial where some information is displayed regarding several sperm whales that beached themselves here.

What’s the camp site really like, and would we go back?

If you aren’t into crabbing, you might not want to stay at Parara Campground. That said, the camp ground is nice enough, with some resemblance of grass for you to camp on, its really close to the water (when the tide is in) and its quite picturesque when the weather is nice. 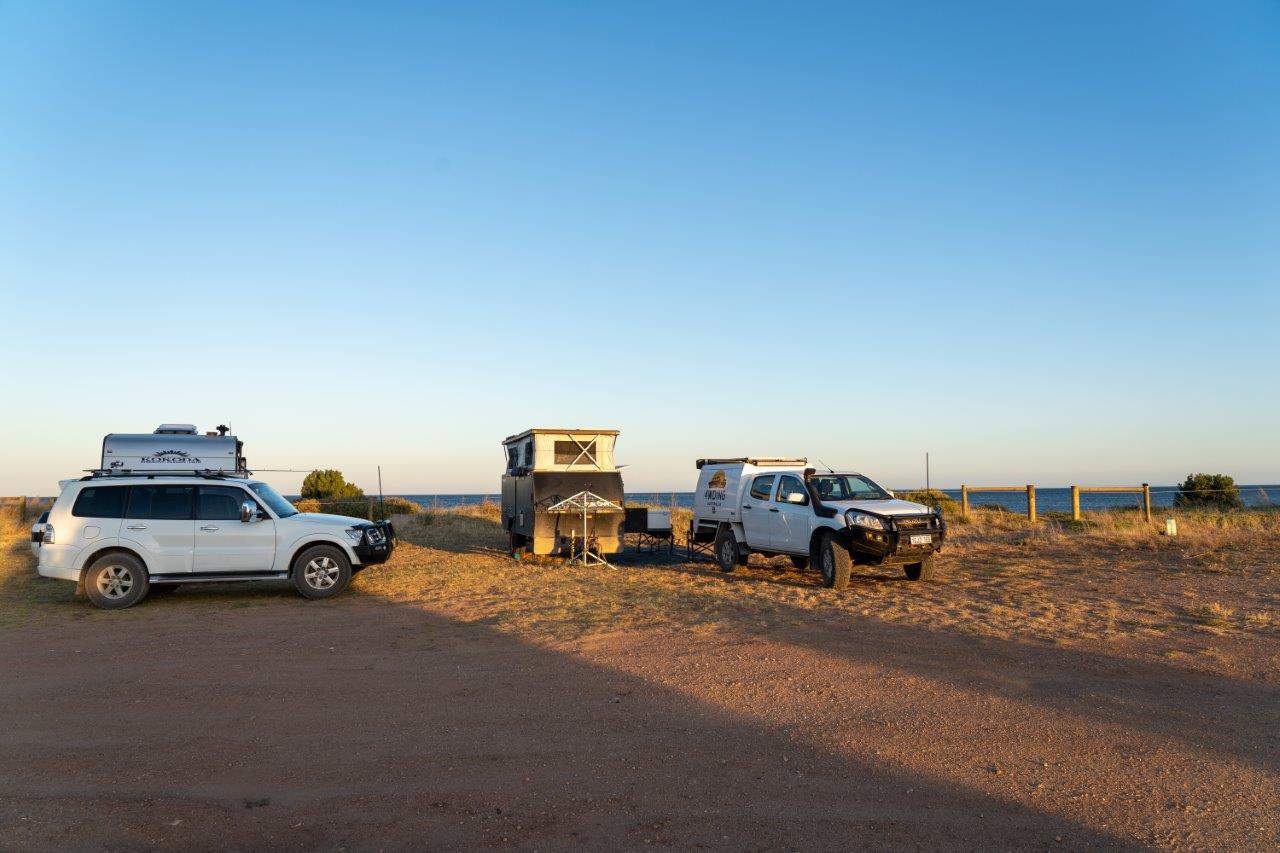 Our location at Parara Campground

We had foul winds for most of the afternoon, and it topped out at 38 degrees, which made for a rather unpleasant few hours, but once it calmed down and cooled down a bit it was really nice.

We’d stay here again if we wanted more crabs, but would be just as happy to check something else out too. 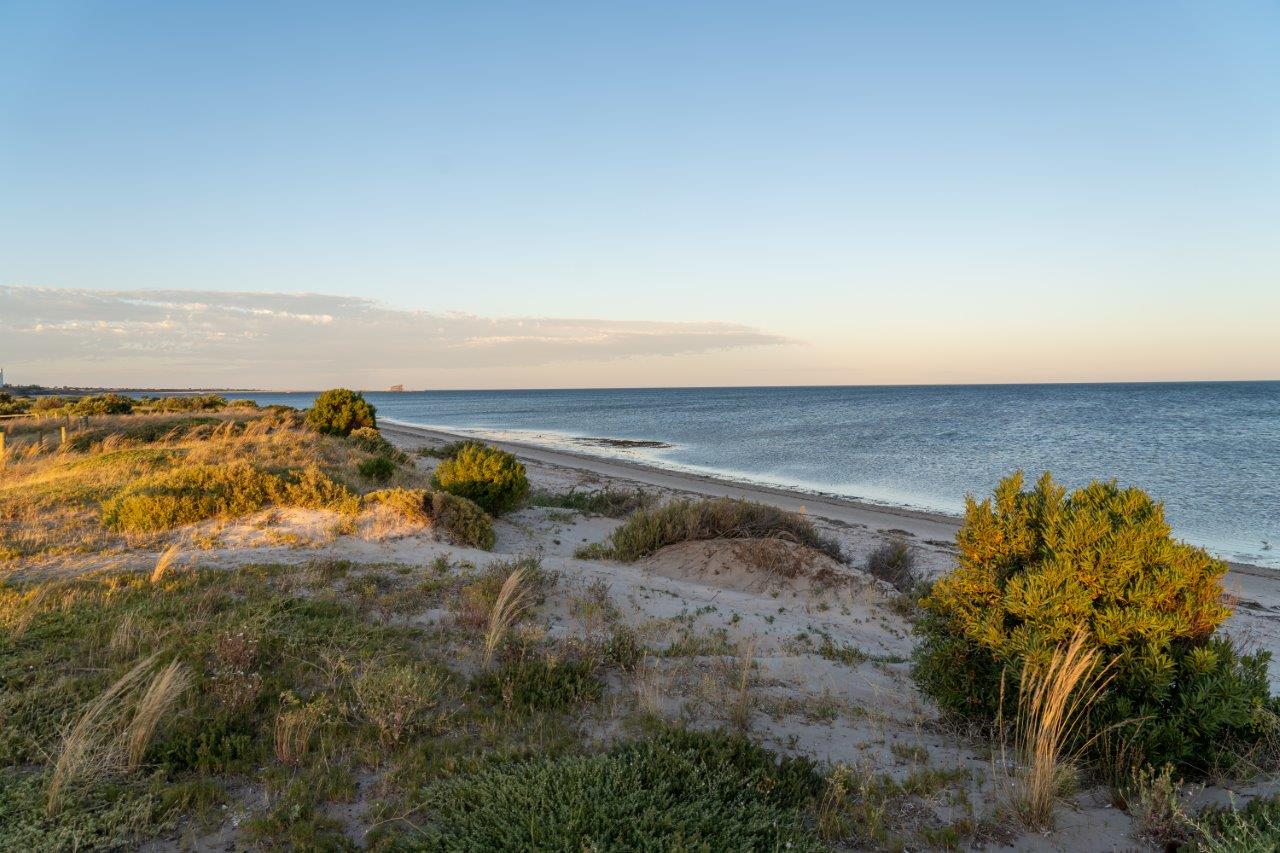 The beach at Parara Campground was nice when it calmed down 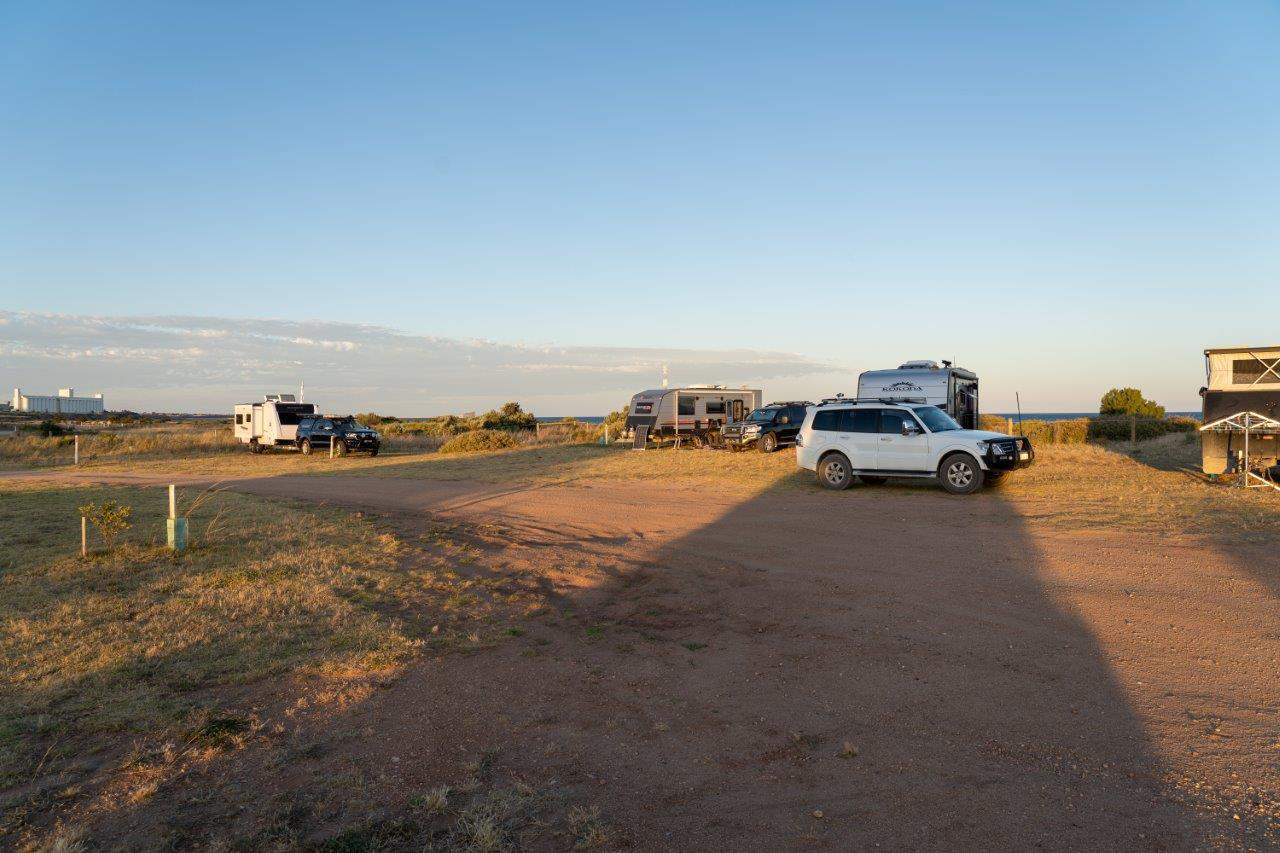