Under normal circumstances we’d get moving earlier, but this place is special and we wanted to kick back for another day, after driving half way across the country (from our home in Perth). We’ve done a heap of coastline in WA, and Scotts Beach was an epic continuation to more incredible coastline in another state. 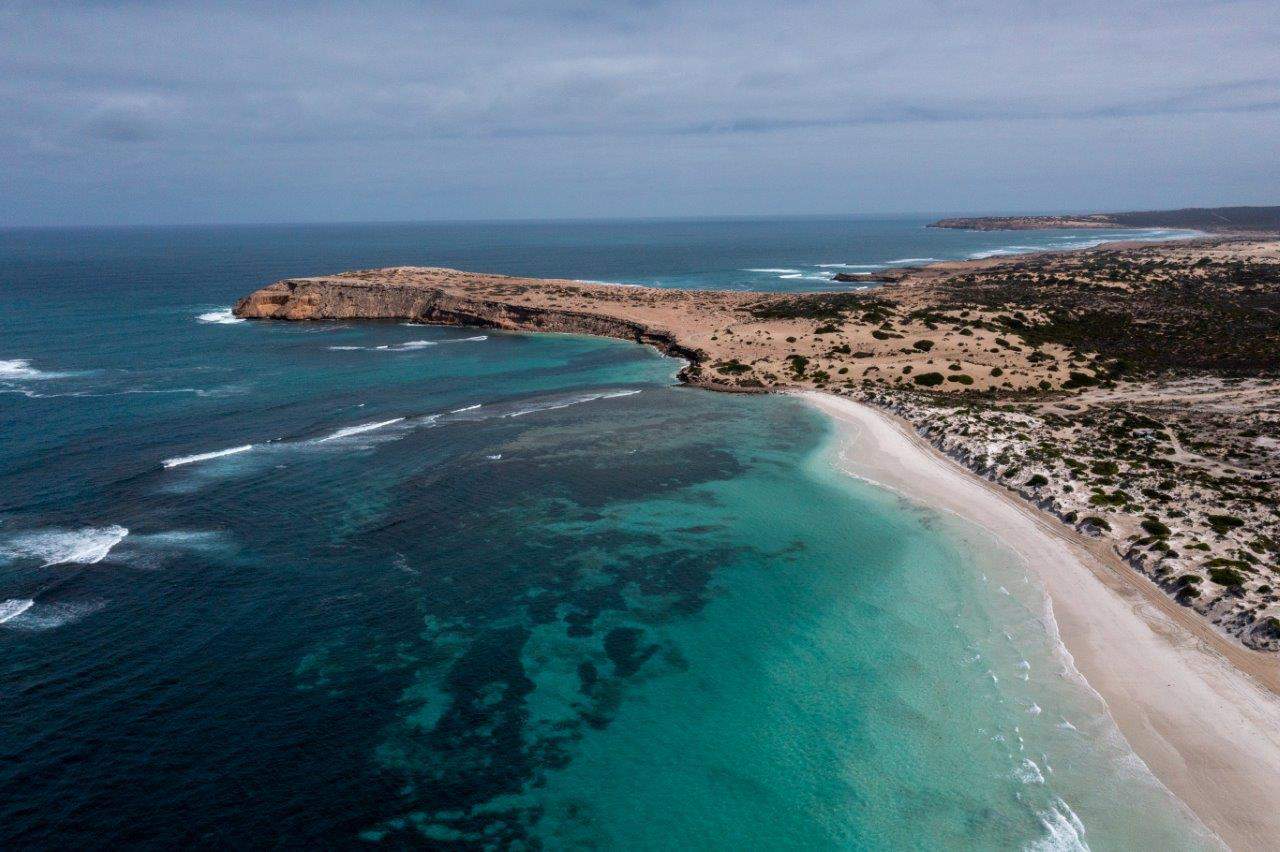 Where is Scotts Beach?

You’ll find this amazing part of the world right near Fowlers Bay, roughly 20km from Nundoo, and 150km from Ceduna. It is outside of the quarantine area, so if you leave, expect to be checked for fruit and vegetables. 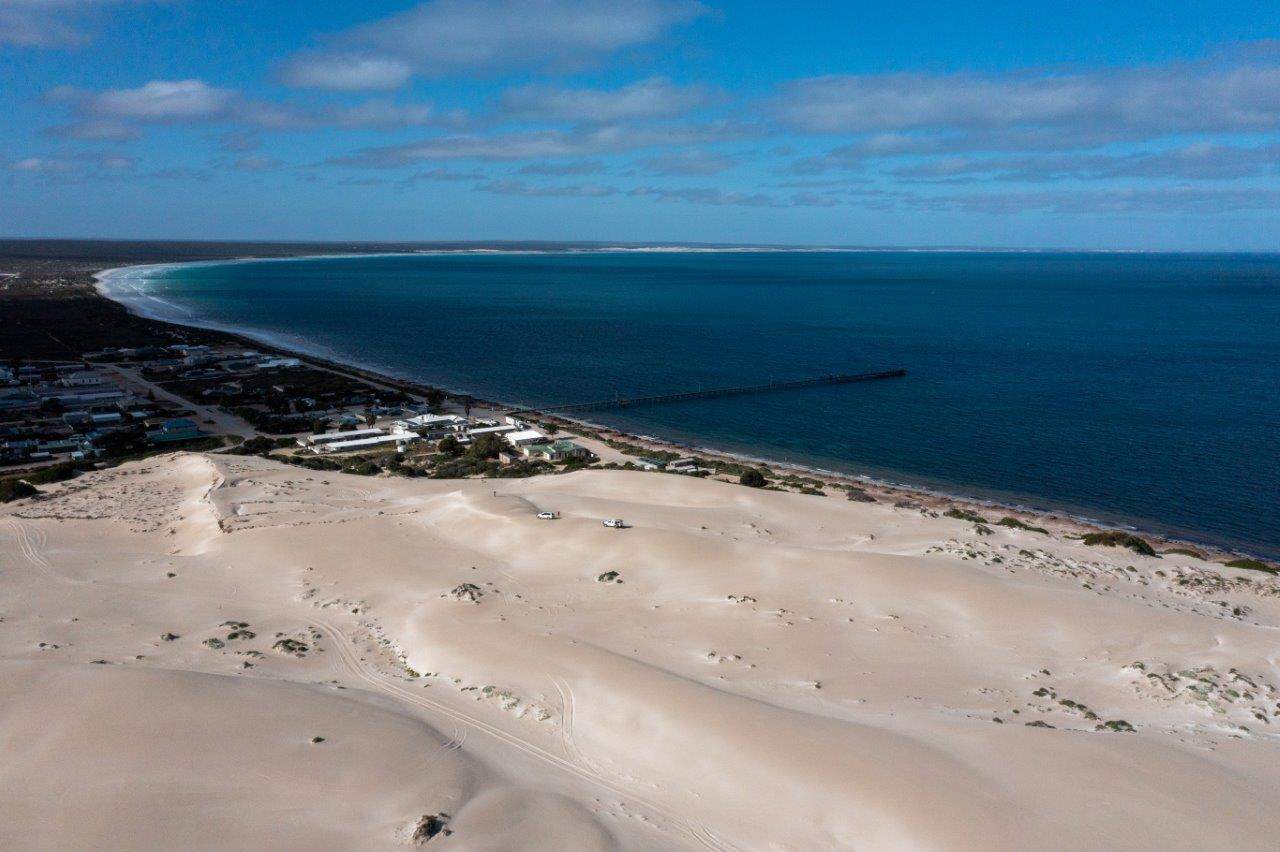 It’s not too far away from Fowlers Bay itself

The gravel road in from Nundoo is corrugated with some pot holes, but not too bad overall. We didn’t let our tyres down at all, but a lot of people do. It’s roughly 20km driving until you arrive at camp, with advise to stay off the salt lakes unless you are confident that they are dry, and are prepared to take the risk. 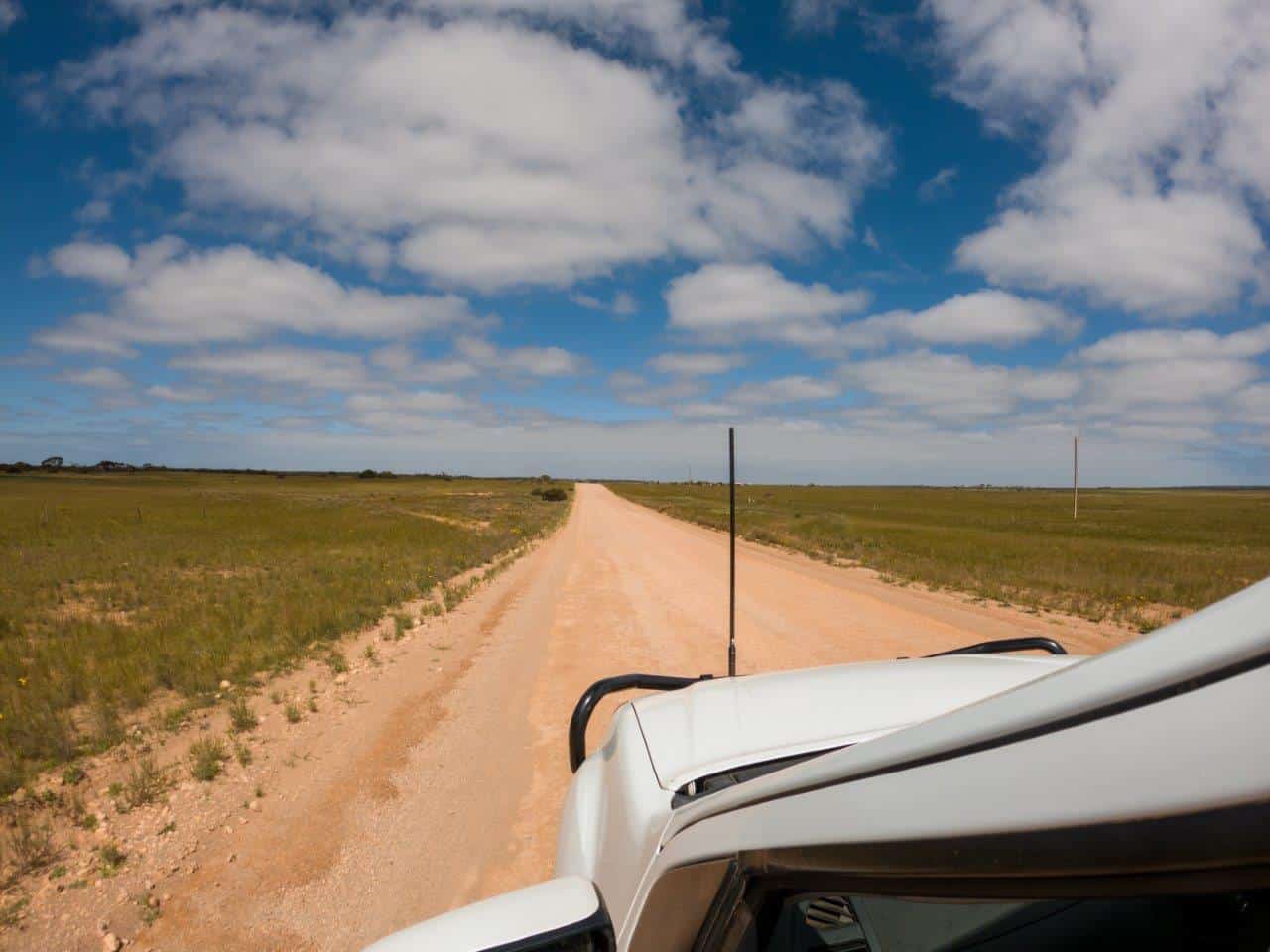 Alternatively you could head through the Fowlers Bay dunes and out along Scotts Bay to Scotts Beach. 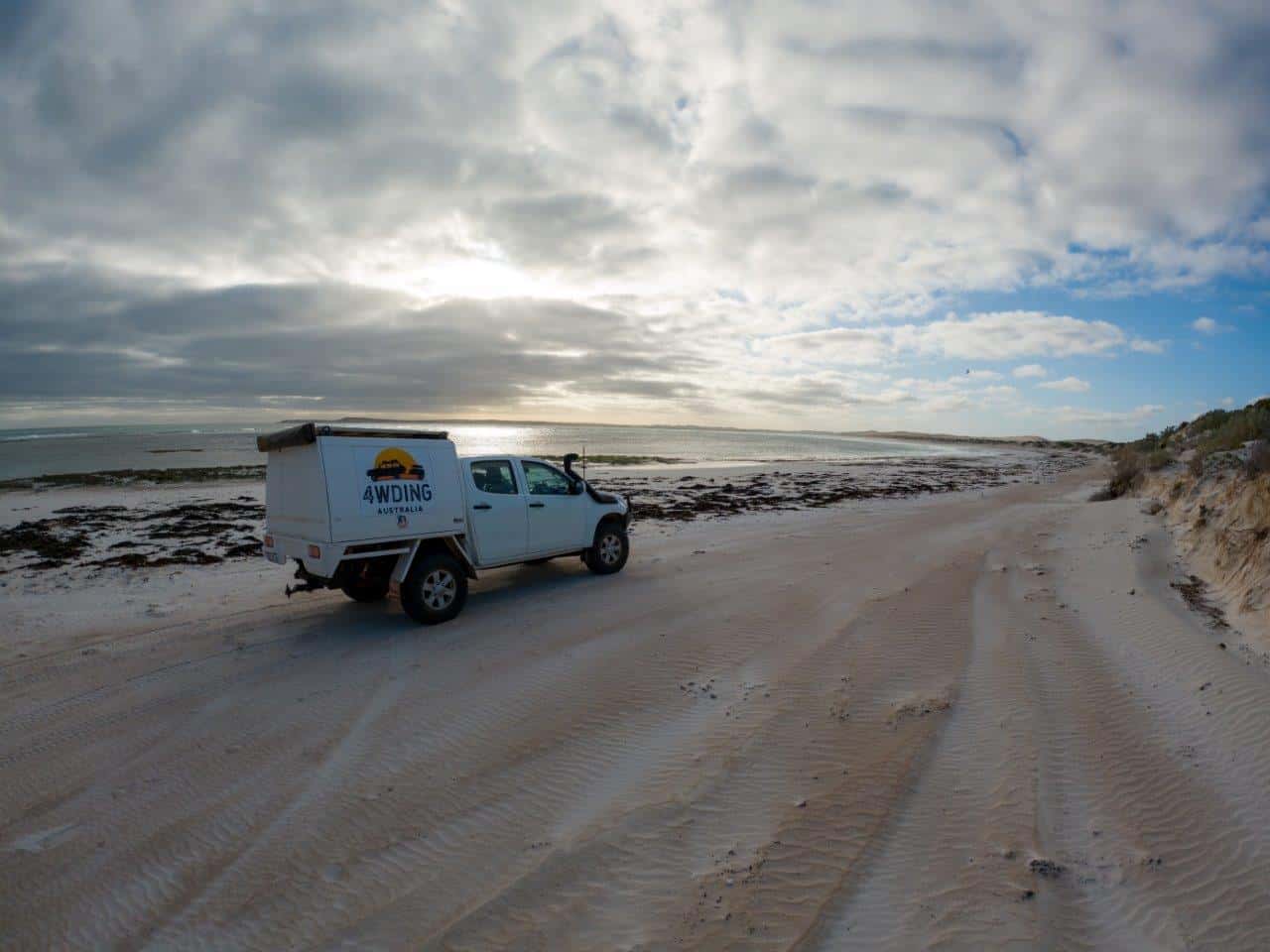 You can get there along Scotts Bay Beach too

Scotts Beach is a beautiful stretch of coastline. The primary camp is just behind the first dune, but you can pull right onto a Scotts Bay beach, and drive all the way around the beach into the Fowlers Bay sand dunes, or out to Point Fowler. 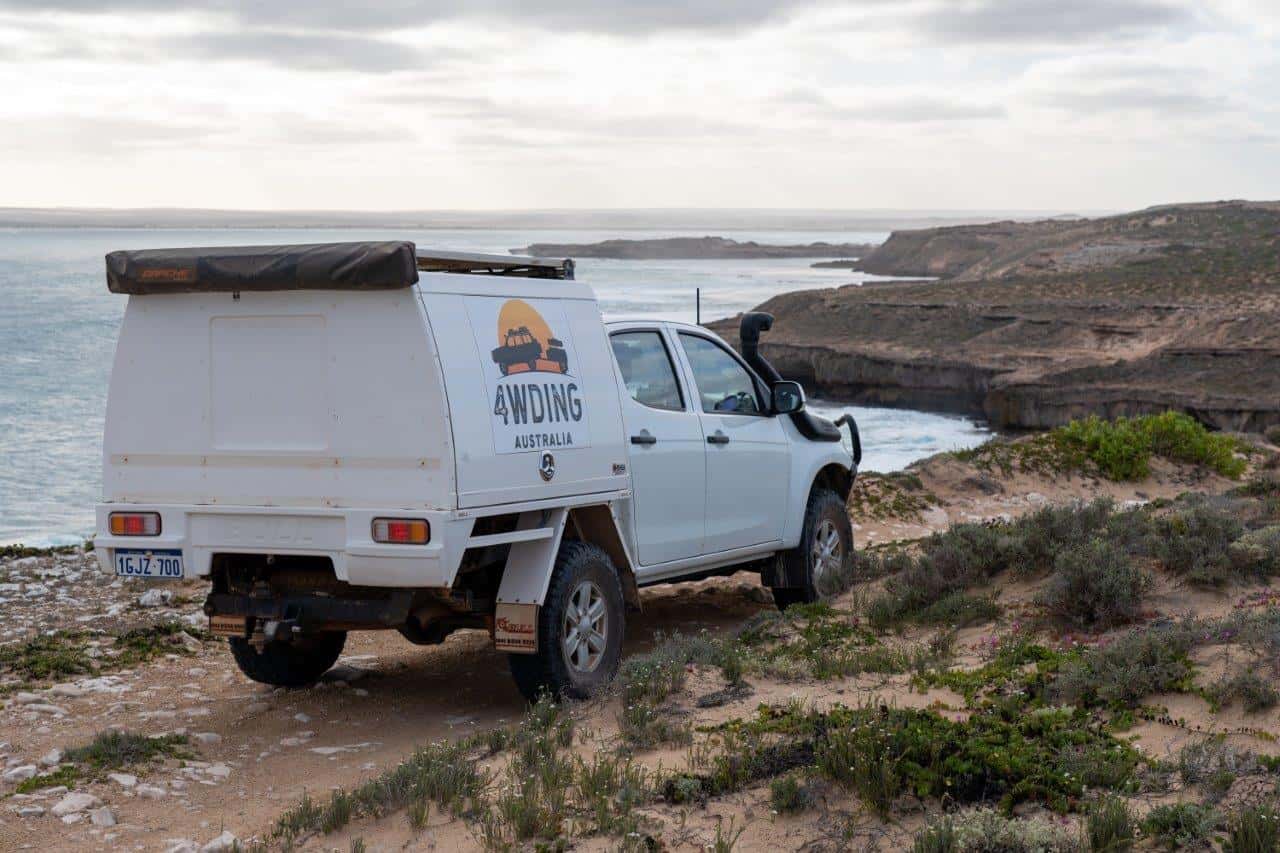 Heading West, you can go out to Point Scott, or head along the coastline to Mexican Head, and even further if you’d like. There are more stunning beaches here than you can poke a stick at, with huge cliffs, rock faces and amazing coves and bays everywhere. 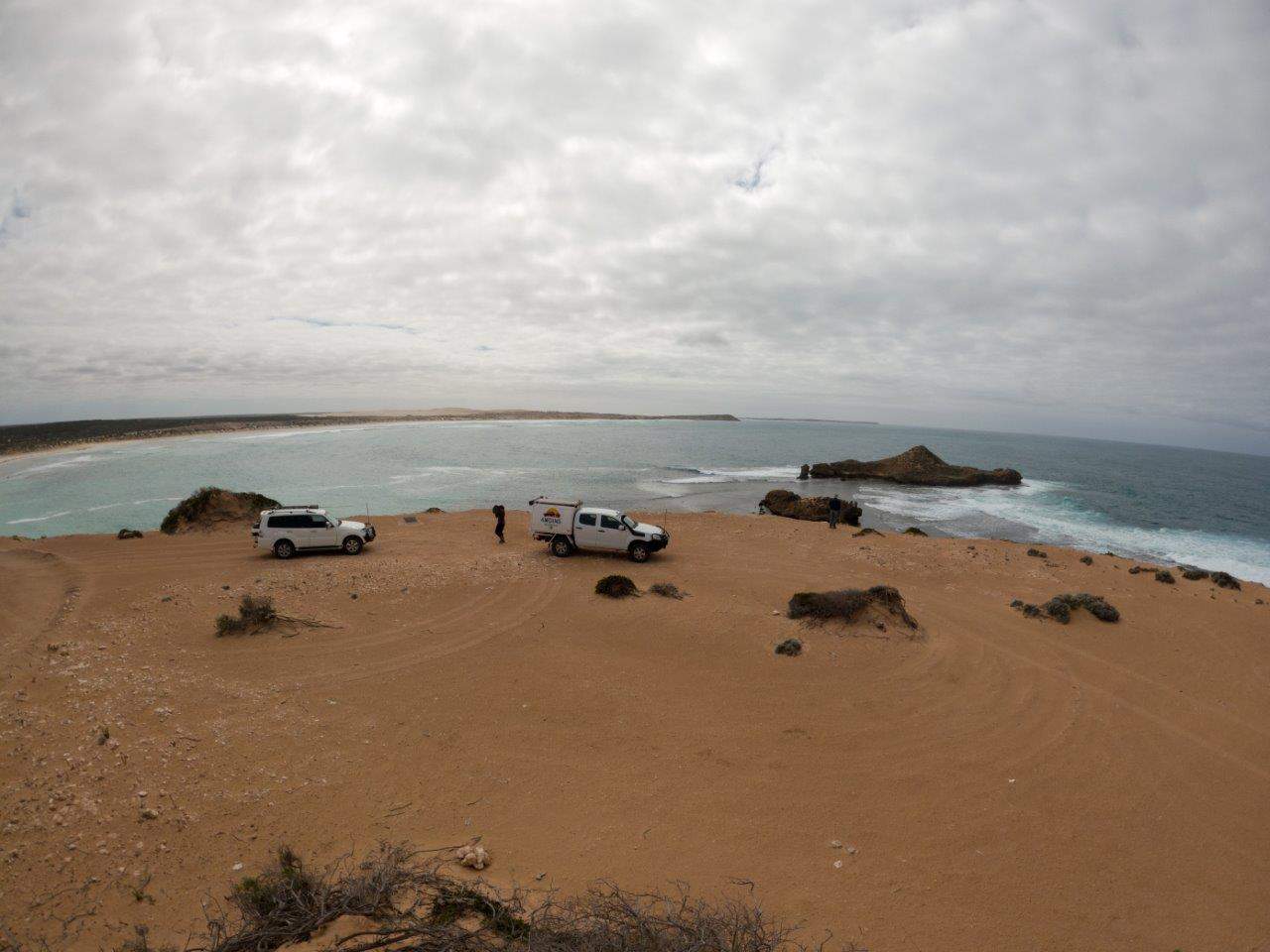 Expect to see a number of seals and sea lions out enjoying themselves, with some truly picturesque spots to kick back and enjoy. 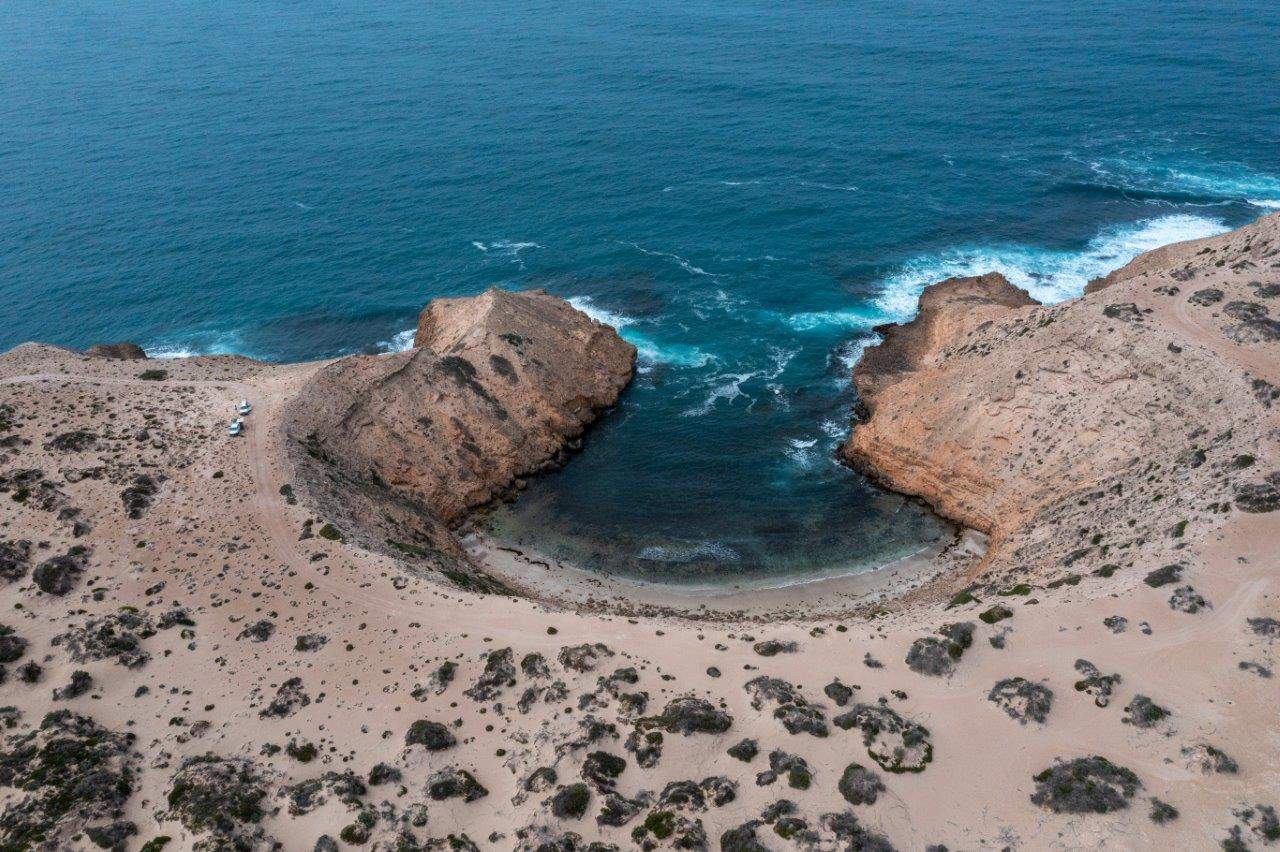 An amazing little cove nearby

We are used to amazing beaches, but Scotts Beach has everything; cliffs, spectacular dunes, amazing scenery in both directions and incredible little coves and bays all within 15 minutes of driving. 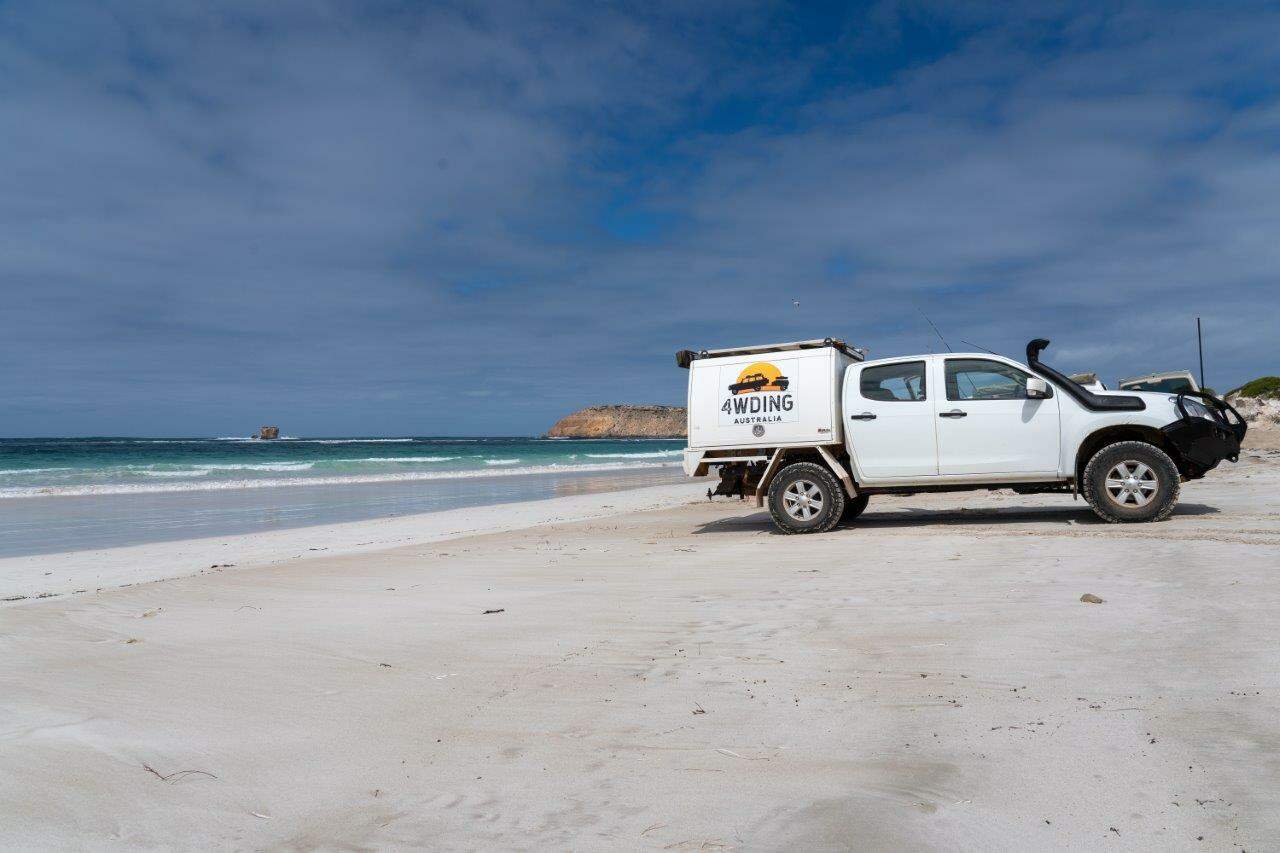 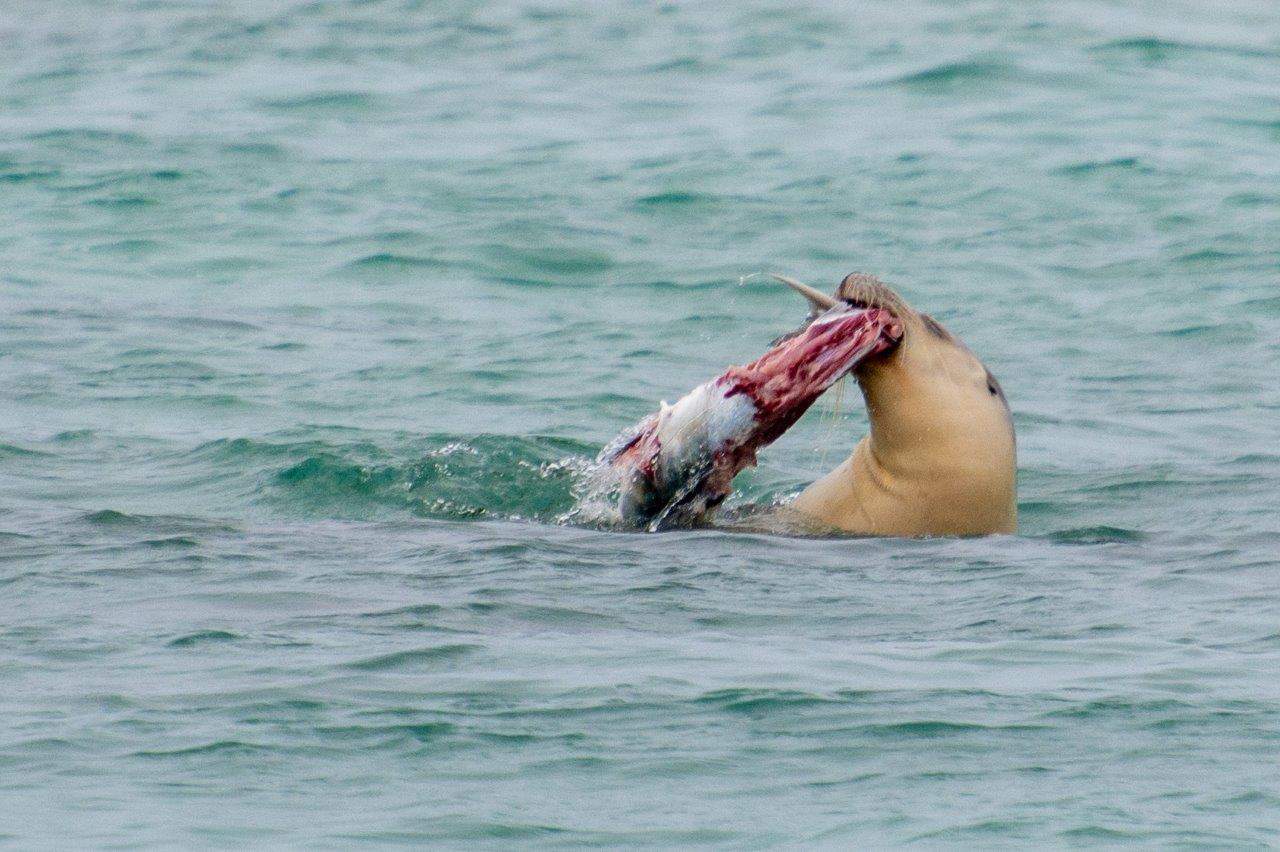 You’ll see seals, and if you are lucky they might catch a feed right in front of you 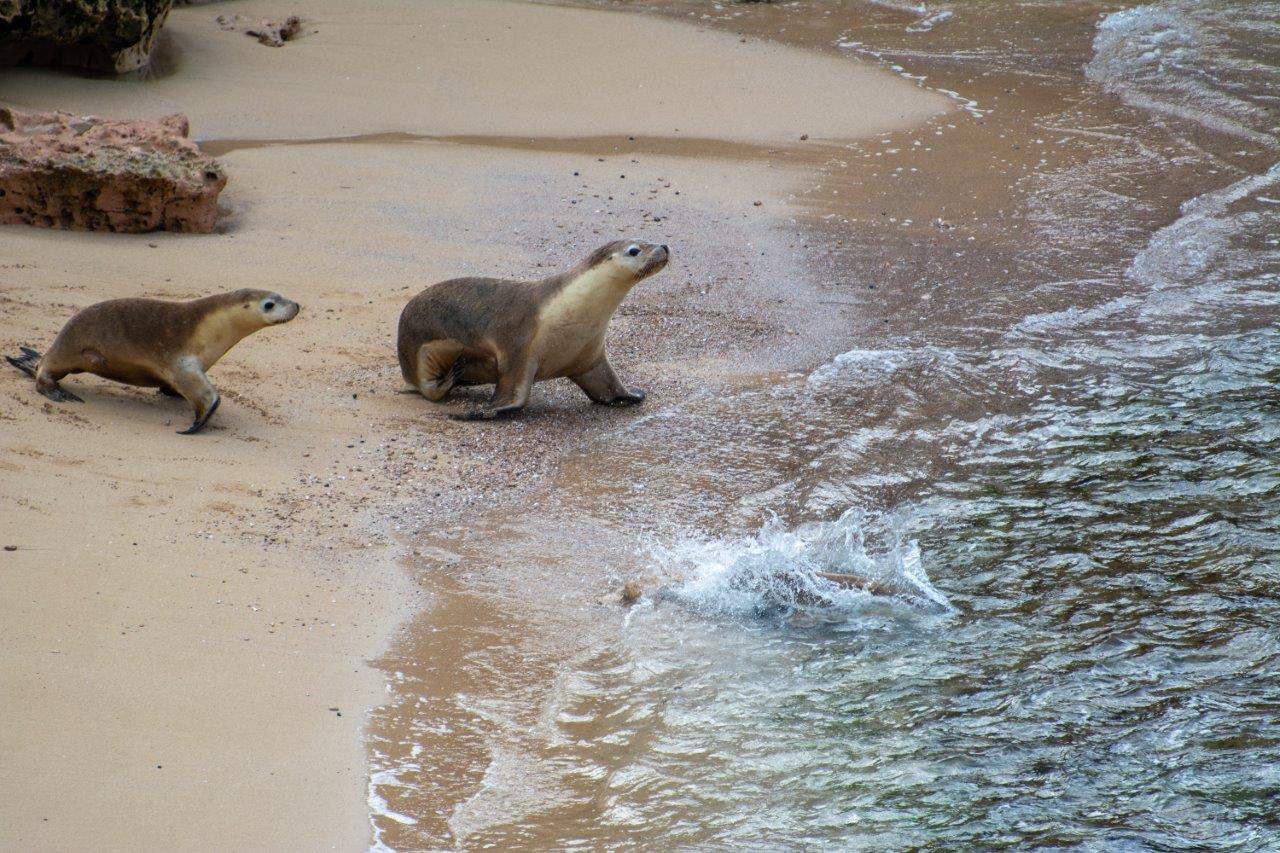 We saw a heap of Sea Lions near Fowlers Bay

How much does it cost to camp?

Camping is $13.50 per vehicle, per night. We thought this was really reasonable, despite a lot of people complaining on Wikicamps about it being too expensive. For our little family of 4, its greatly appreciated, and we love spots like this. 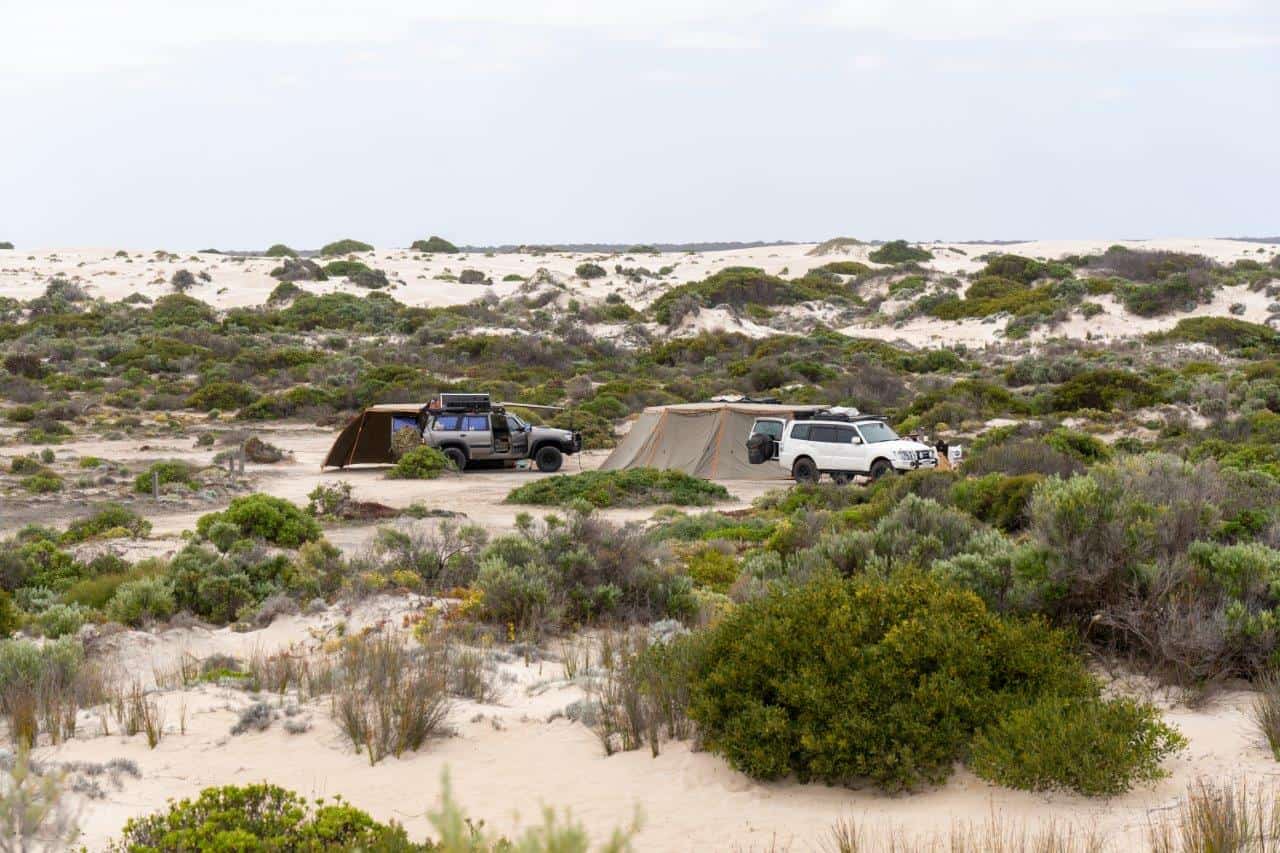 There’s a heap of places where you can camp, even right along the coast if you please

Scotts Beach has a toilet, but toilet paper doesn’t seem to be provided. No big deal; take your own, and enjoy not having to bring your own toilet. There’s no other amenities available, and that means you need to bring everything you need in, and take it all out again too! 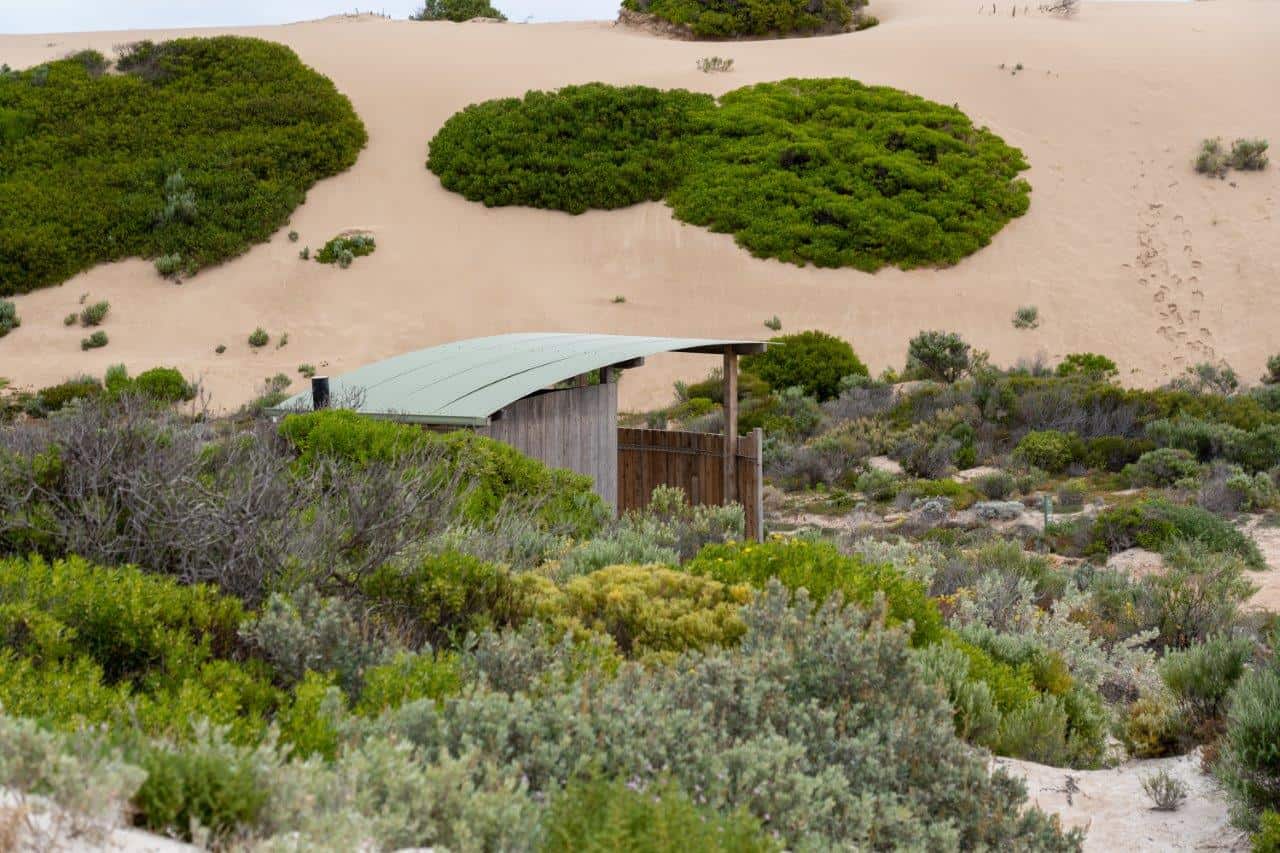 There’s one toilet at Scotts Beach which was in good shape, but BYO toilet paper

When you see the coastline at Scotts Beach, its no wonder fishing is popular here. We got some good information off a couple of helpful locals and managed to get 3 decent sized salmon one afternoon, right on high tide in a couple of big channels on the main beach. 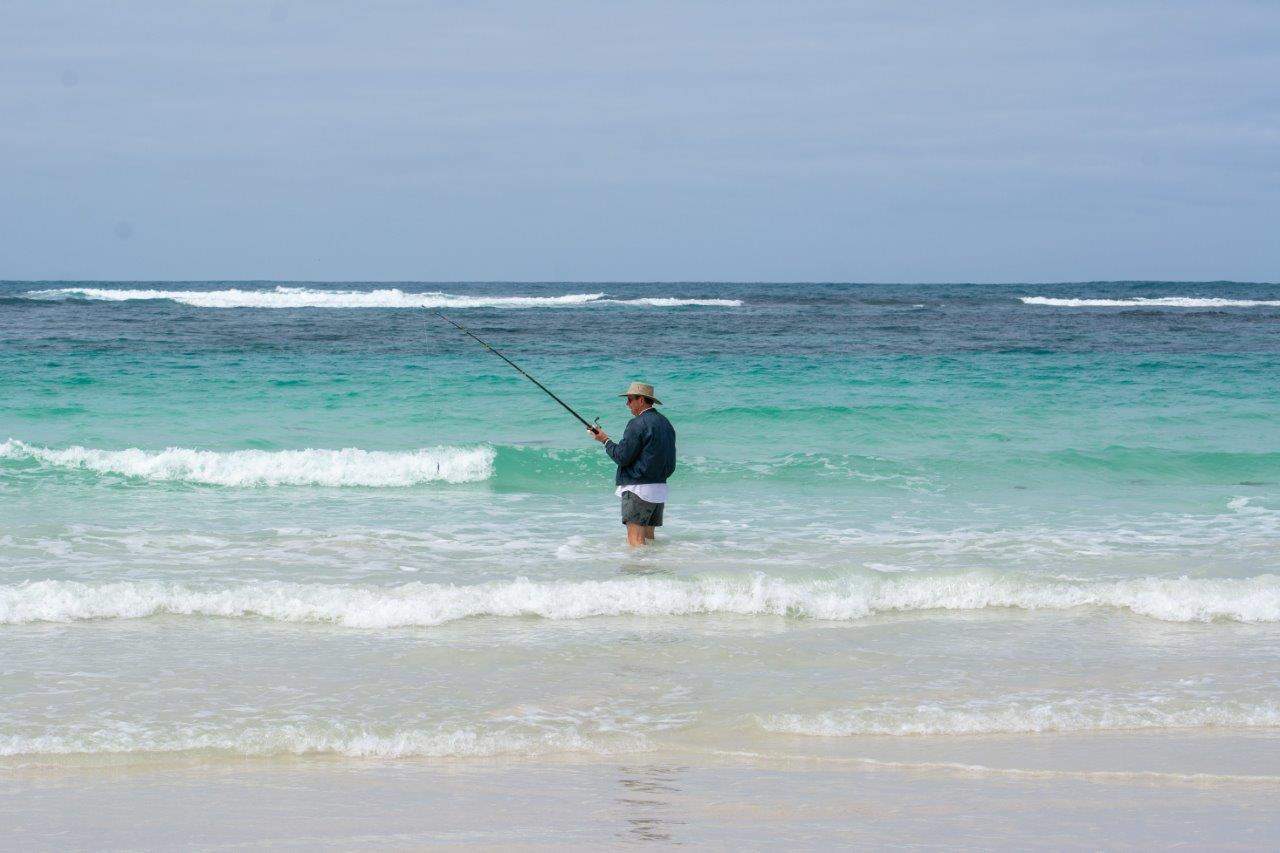 Fishing for salmon off Scotts Beach at high tide 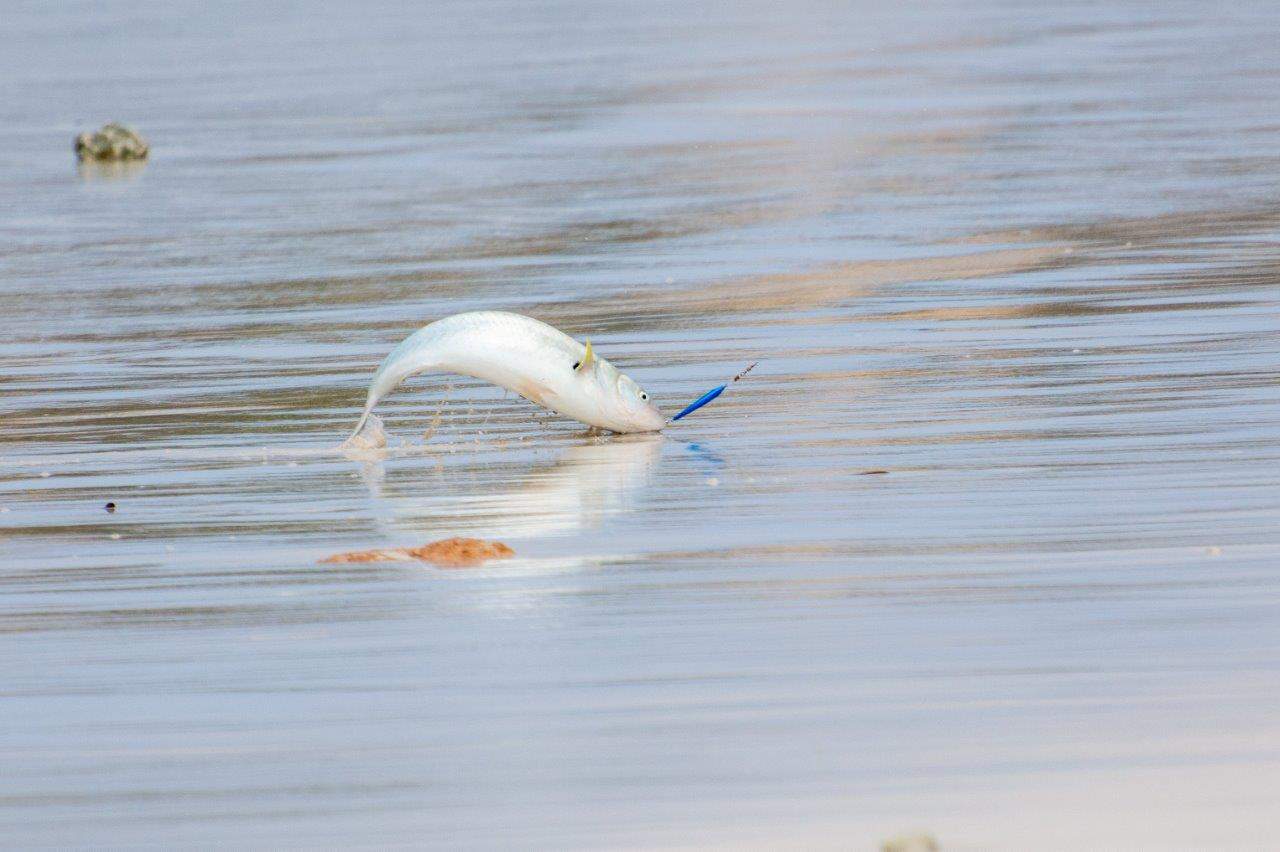 Lures seemed to work just fine for catching these

You’d do well catching other species here, and if you were into extreme fishing there are more opportunities to wet a line here than I’ve seen for a long time. 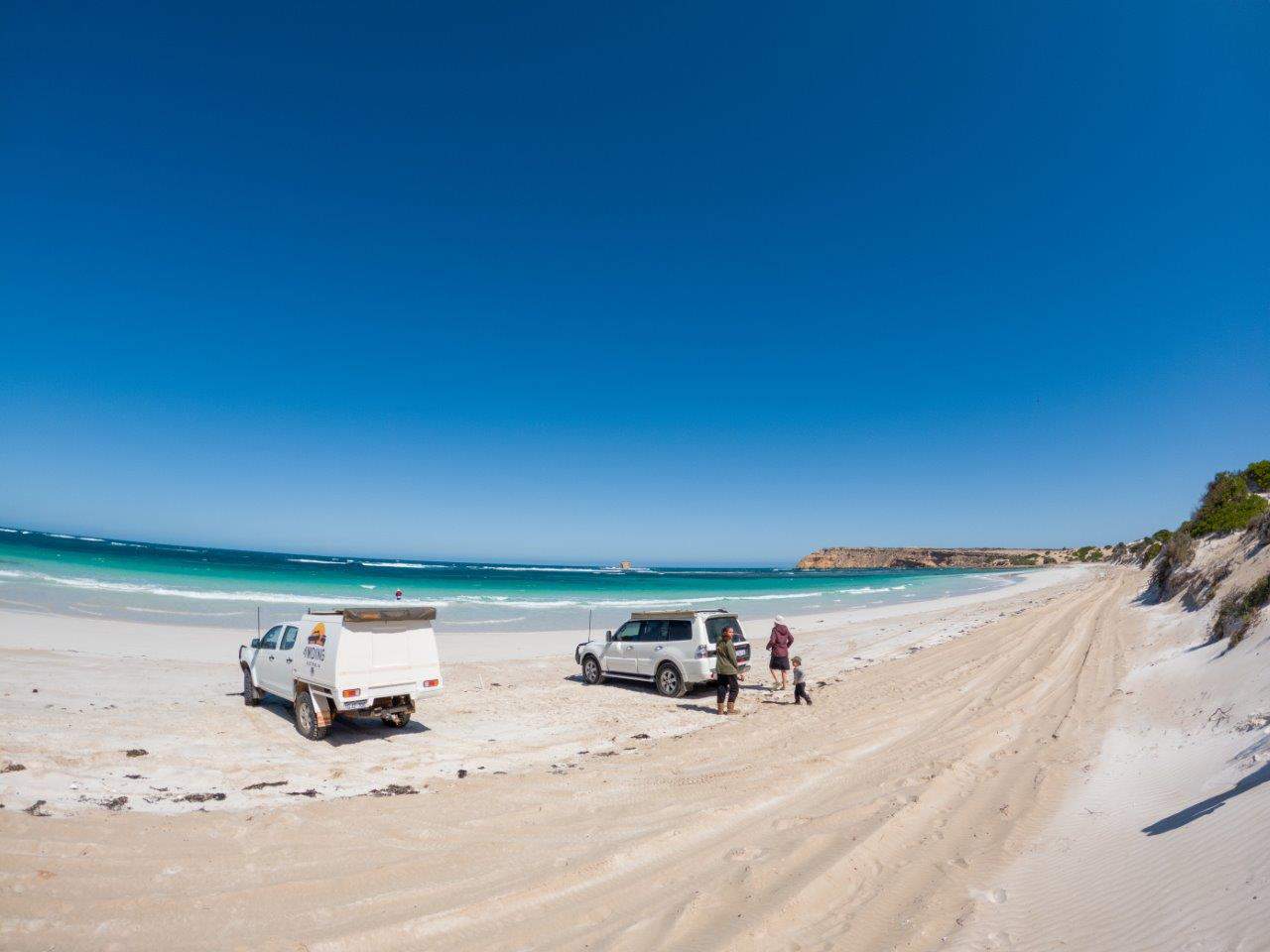 There’s so many places you could fish here

The South Australia coast can be seriously windy, much like WA. We visited at the end of September, and the days were cool, with wind that bounced between reasonable and unpleasant. Fishing with the wind howling in and standing in the freezing water was a sure way to turn into an icicle, but camping on the coast is always subject to heavy winds and you should expect it.

In summer when the temperatures are higher it would be a magic place to kick back and even have a swim, but it was far too cold when we visited! 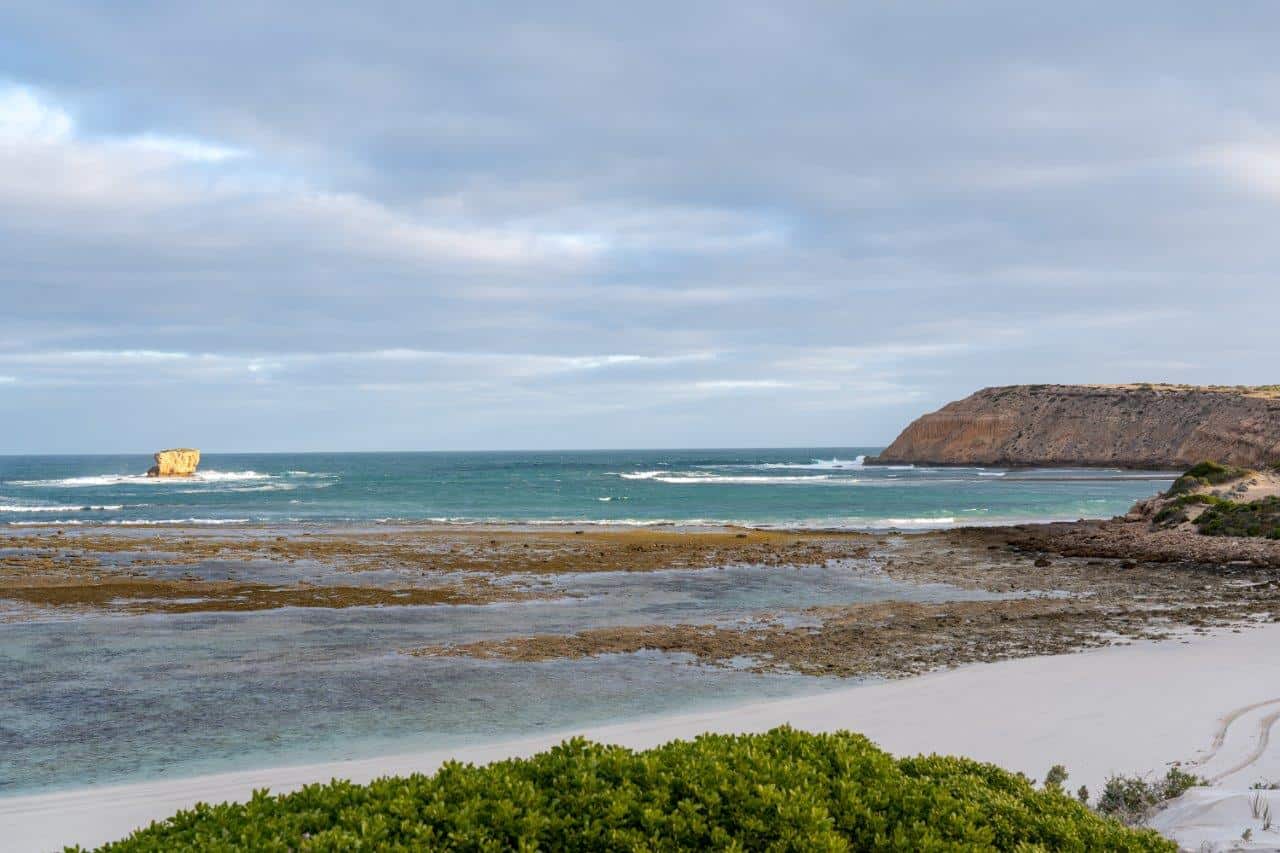 It was way too cold for us to swim

We were getting tired of the fine sand blowing everywhere, including into the kids eyes, but its part of camping in these areas when its windy, and you can’t complain too much! We just tried to shut everything up where possible to ensure we took as little home with us as we could. 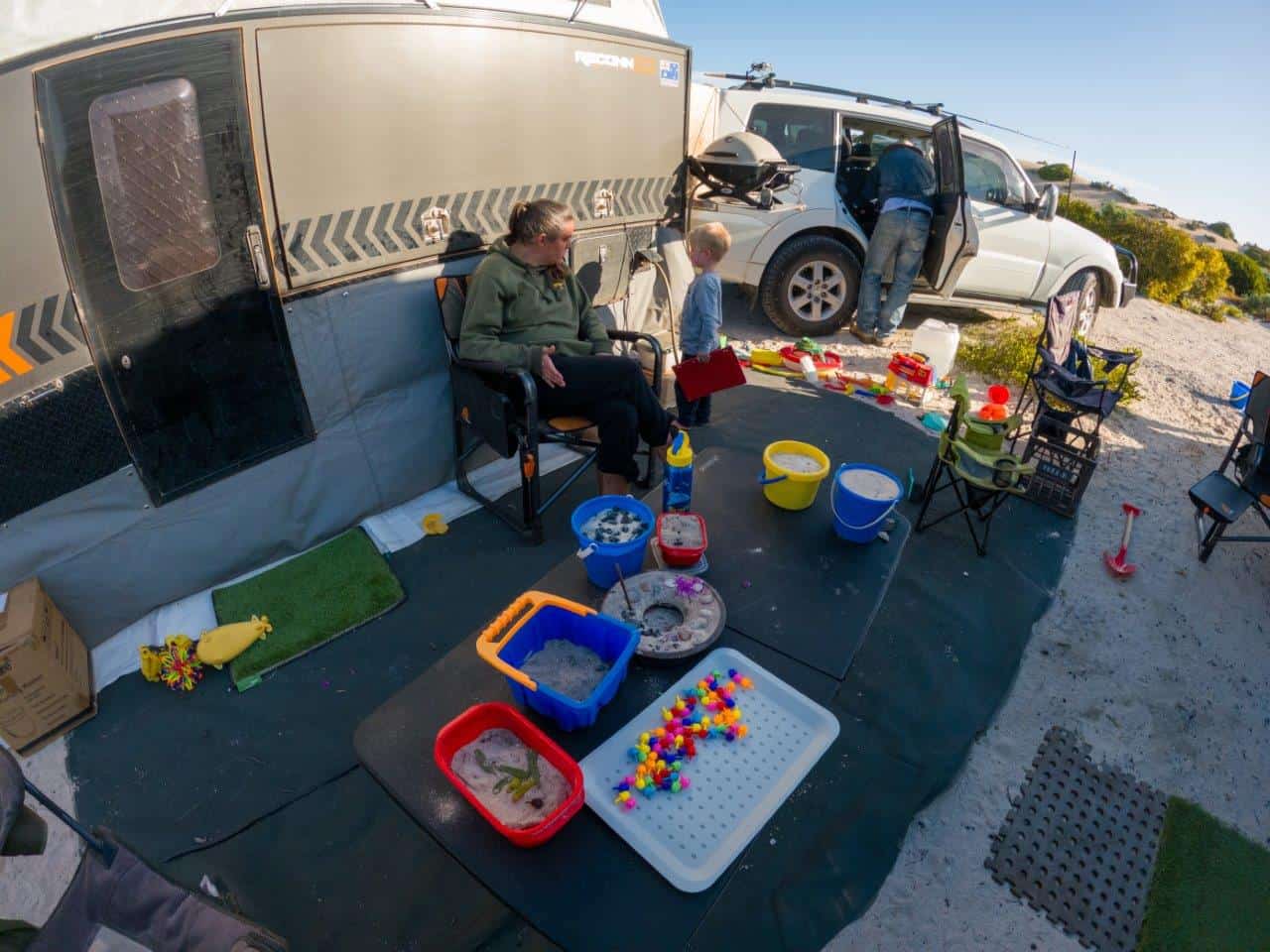 We kept as much shut as possible, and hid when it was windy

Where else can you camp in Fowlers Bay Conservation Park?

If you want to camp elsewhere in the Fowlers Bay Conservation Park, Mexican Hat is just down the road and camping is allowed in basically any location you can get to, providing you’ve paid your fees and you aren’t where you shouldn’t be. 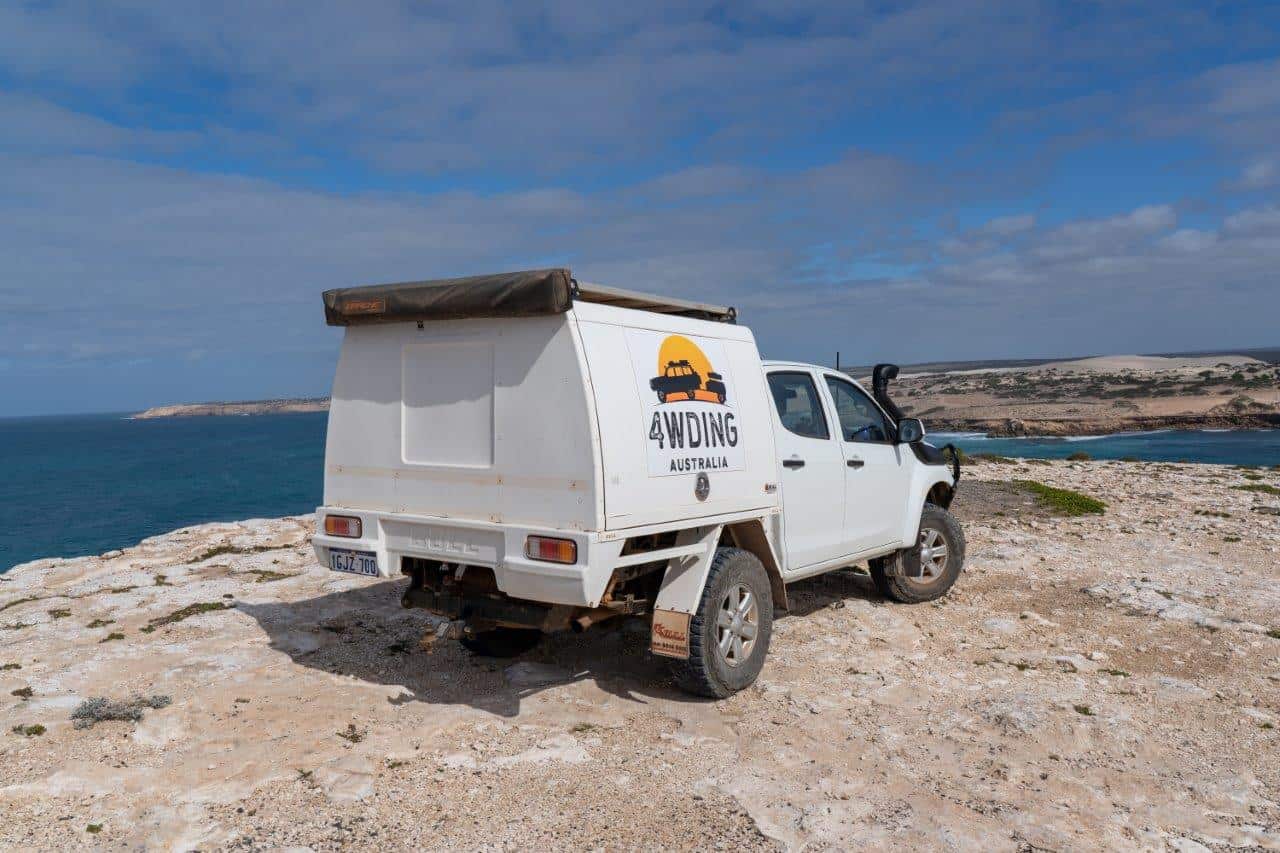 There’s a heap of camp sites closer to Mexican Head

There’s more coastline for you to explore than you could do in a number of days, and finding a nice place to kick back and camp is not difficult at all. We really enjoyed Scotts Beach, and would happily spend a lot longer there with a bit warmer and less windy weather. It really has all the coastline you want, with plenty of choice of where to go!