Rawnsley Park Station; a nice surprise in the Flinders Ranges

There’s some amazing places to camp in the Flinders Ranges, and whilst we never intended on staying at Rawnsley Park Station, we spent a couple of nights there towards the end of our Flinders Ranges adventure, and were quite surprised. 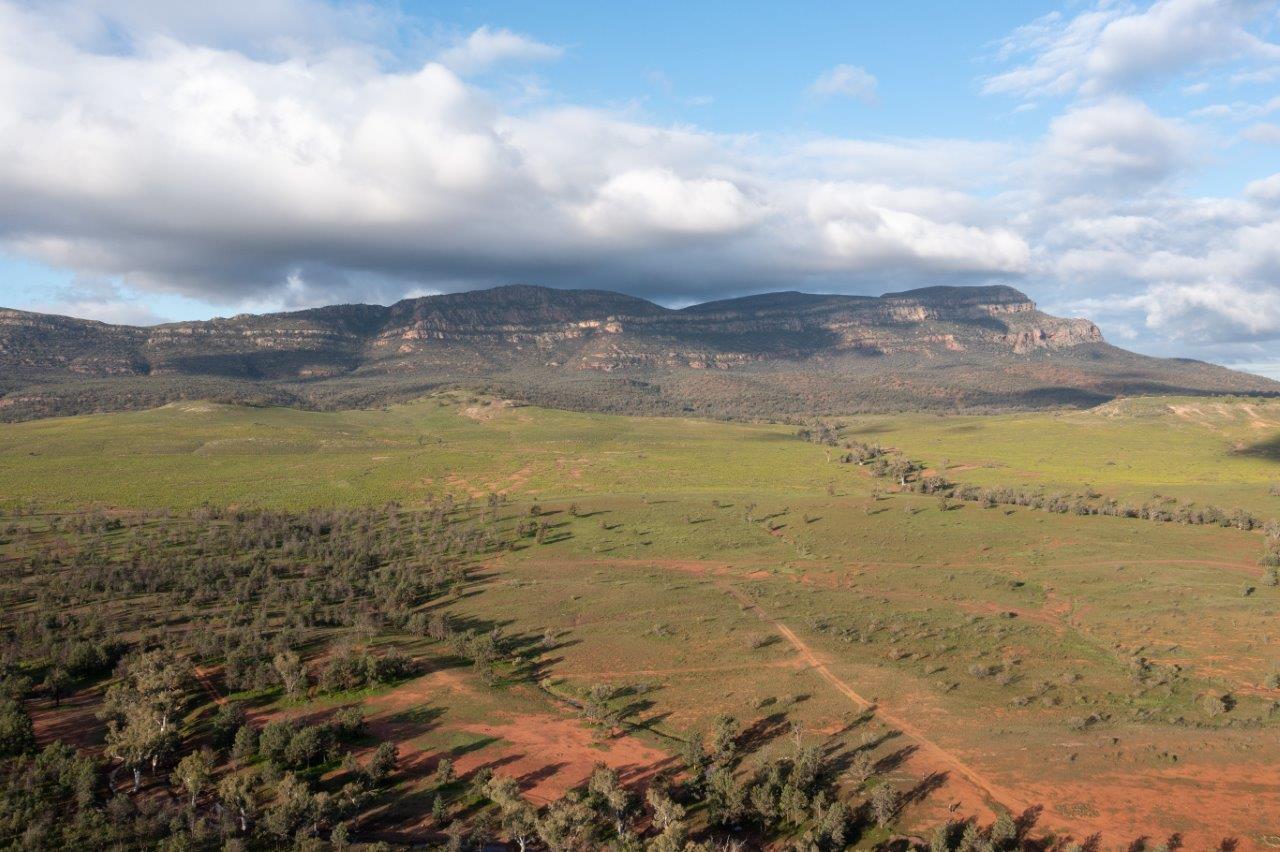 The views from Rawnsley Station are shockingly beautiful

We’d come from Willow Springs and despite getting drenched, finding our camp site in the clouds and leaving very muddy, we left in high spirits. The initial plan was to go and camp at Brachina Gorge and camp for a few nights before going to Edeowie Station, but given the rain everything was closed, and we were actually struggling to find places to camp without heading out of the Flinders completely, until we found Rawnsley Park Station.

I’d heard of this place before, but until I rang and researched, I didn’t realise it was so large. We were glad of a property that didn’t require bookings for camping, as it opened some of our options again, that we’d lost with so much rain fall closing different tracks through the Flinders Ranges.

We booked in for two nights at Rawnsley Park Station, with the option of extending it, and I was feeling fairly positive about it, given the absolutely stunning views on the drive into the property! 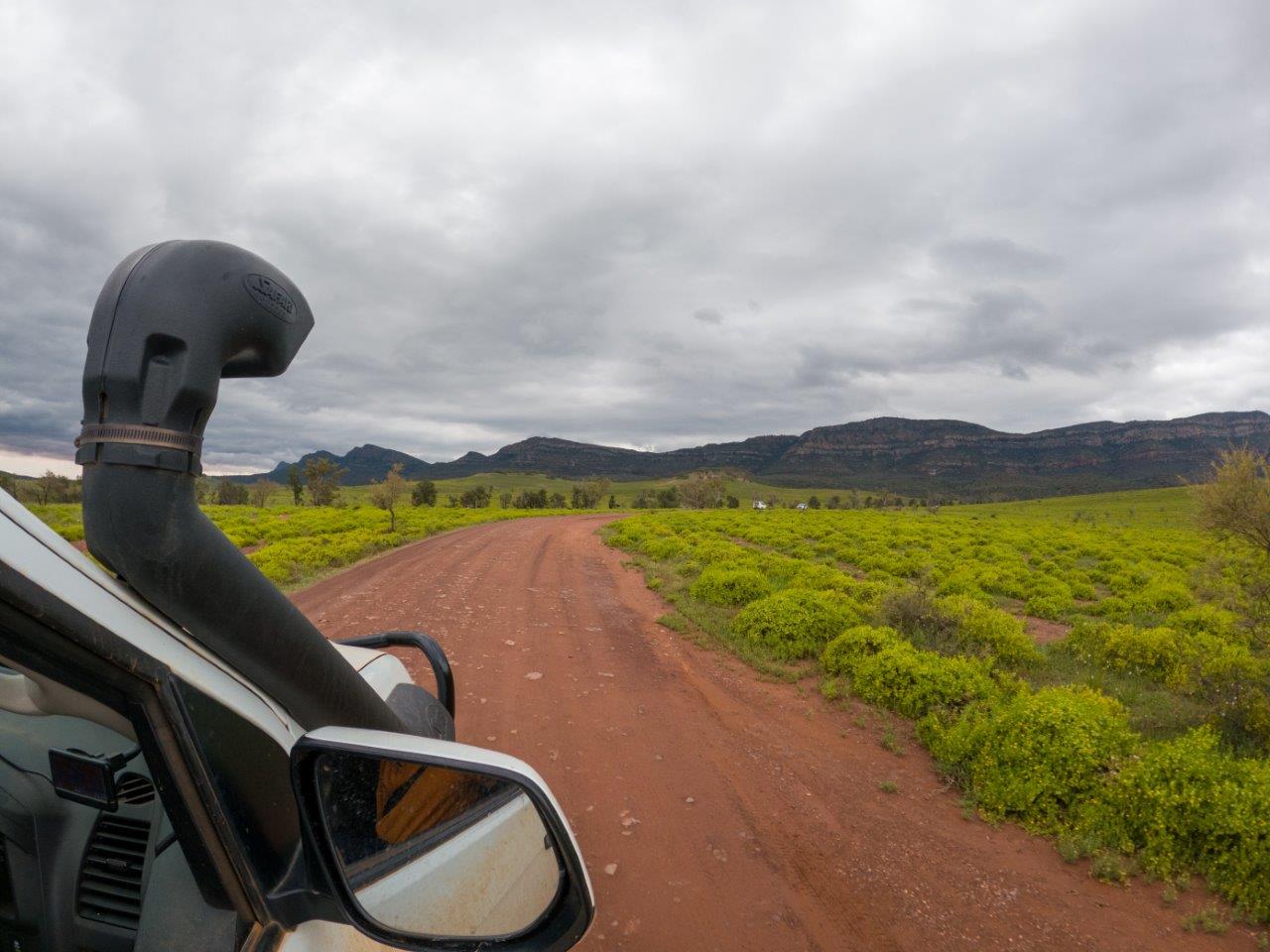 Where is Rawnsley Park Station?

This amazing property is located only about 40km from Hawker, or around 140km from Port Augusta. Its off the main bitumen road, and is easily accessible by all types of vehicles.

The driveway might be considered as quite rough, with 2WD’s having to take it nice and slow, but not hugely long, and you can avoid a lot of the little holes that have formed. On the way in we had our tyres down and didn’t notice it too much, but you certainly feel them with your tyres pumped up! 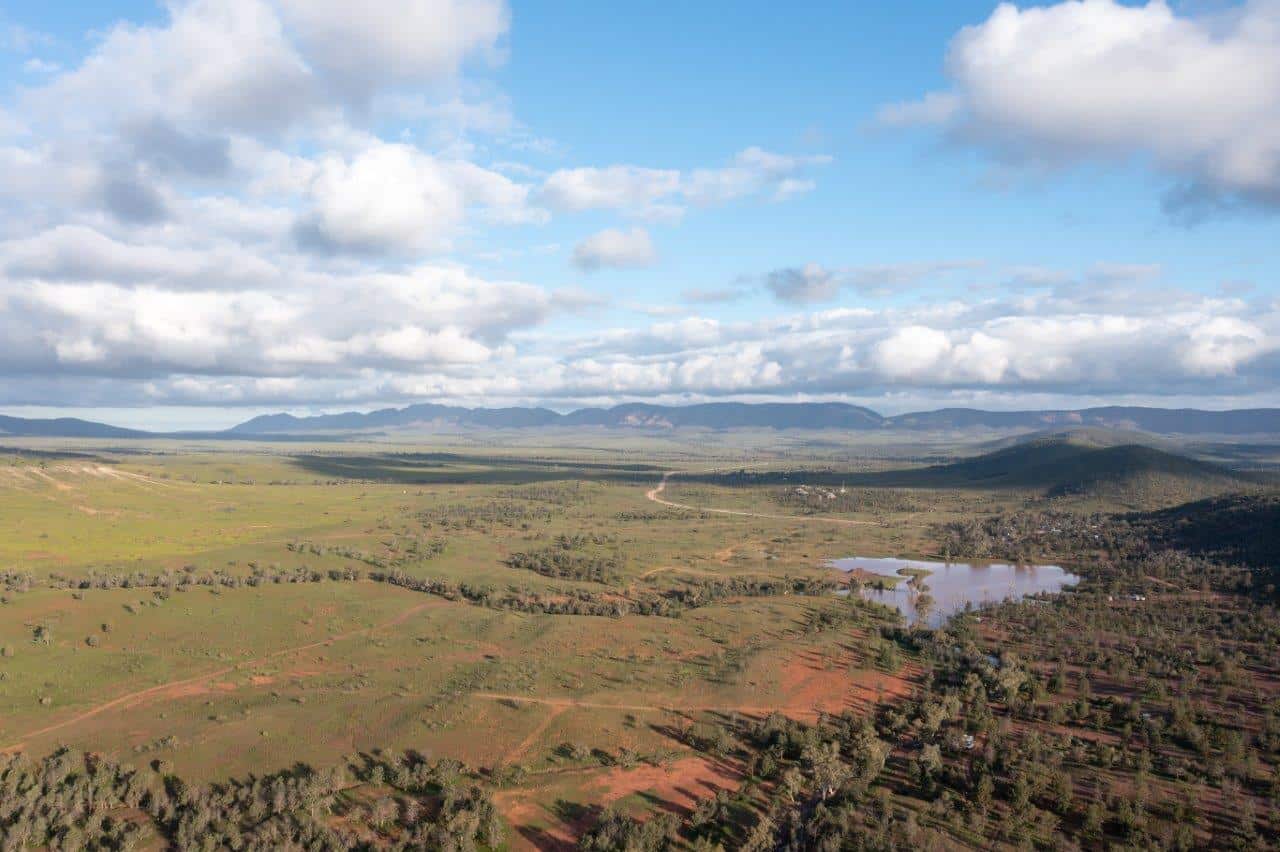 The driveway is a bit rough, but well worth doing

Rawnsley Park Station is part of the G’day Parks group, and they have a traditional caravan park on site, with everything that you’d expect. That means powered and unpowered sites and they even offer a huge amount of bush camping, which we thoroughly appreciate. This is unpowered, but out in the bush, and well away from the bulk of the campers. 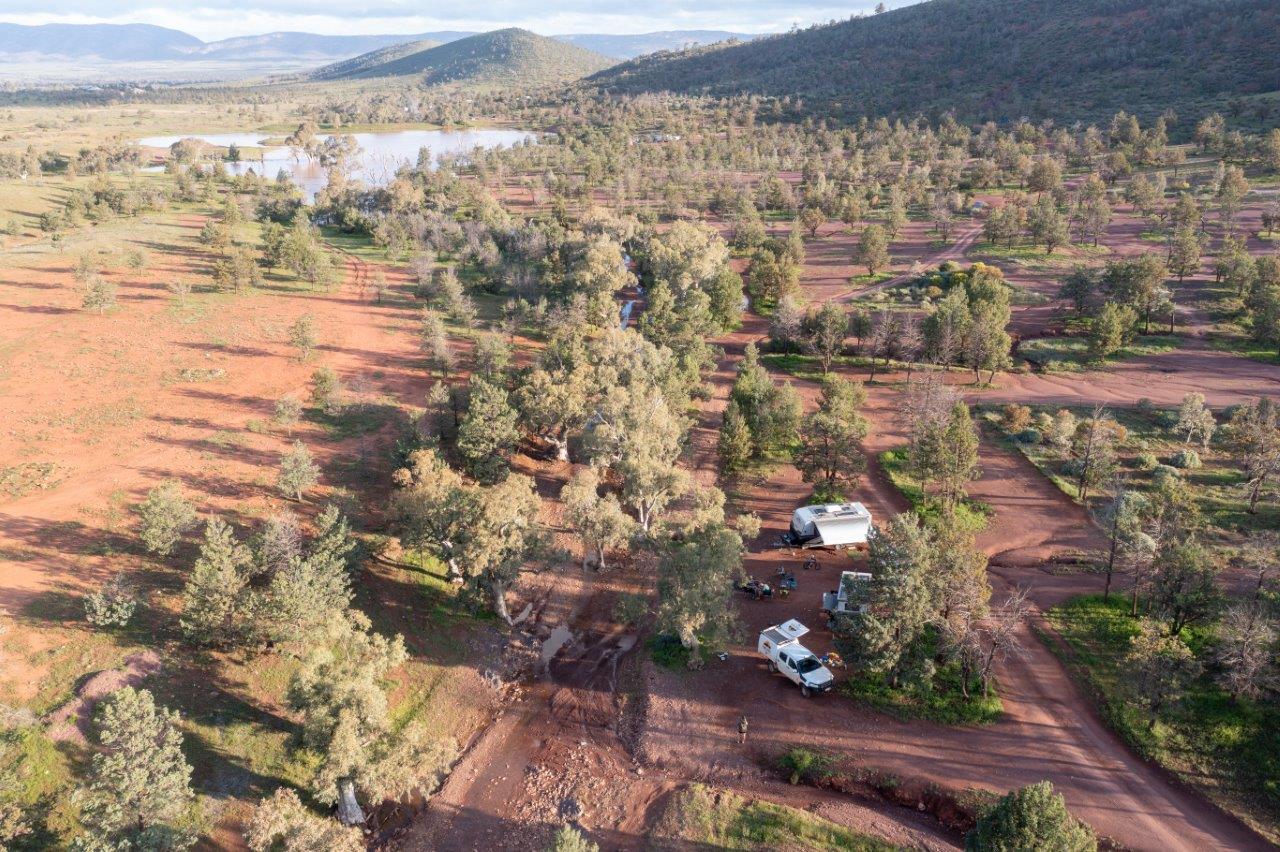 The bush camping at Rawnsley Park Station is really good 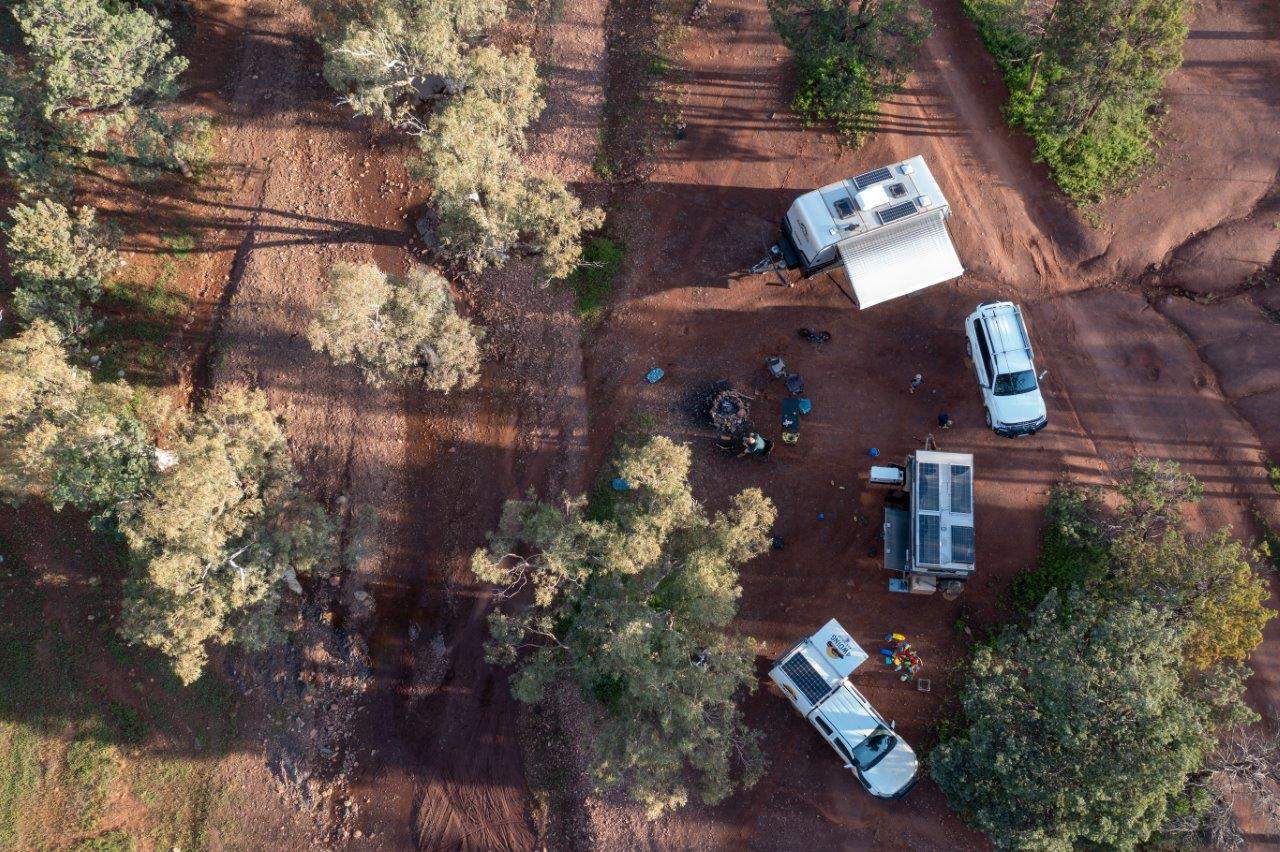 Kicking back next to a small stream 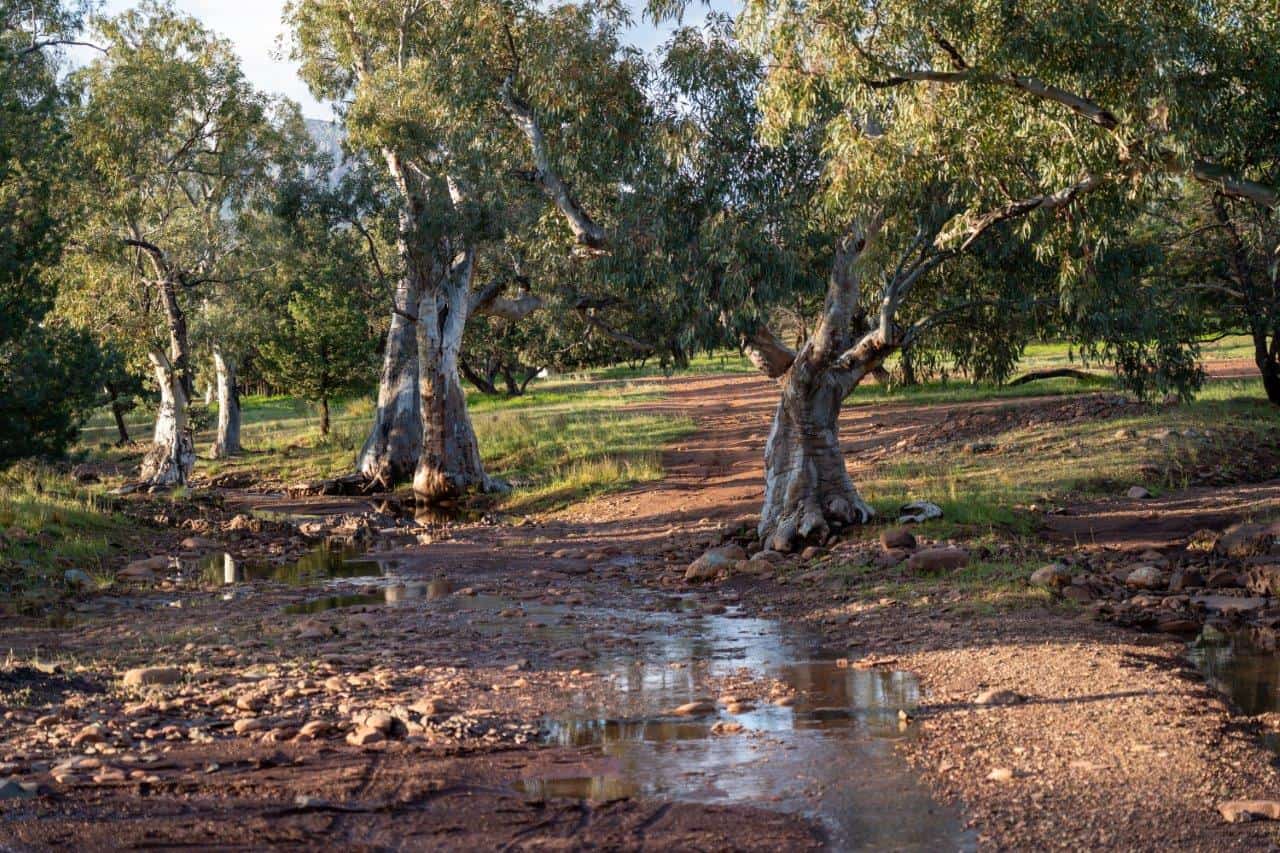 We were really pleased with our camp site

Rawnsley Park Station have a big, man made lake that is quite picturesque, with a huge amount of camping that runs further and further away from their property. This means you can arrive without booking, as they have unlimited places to camp, much like Arkaroola, and that’s a big relief when its busy. 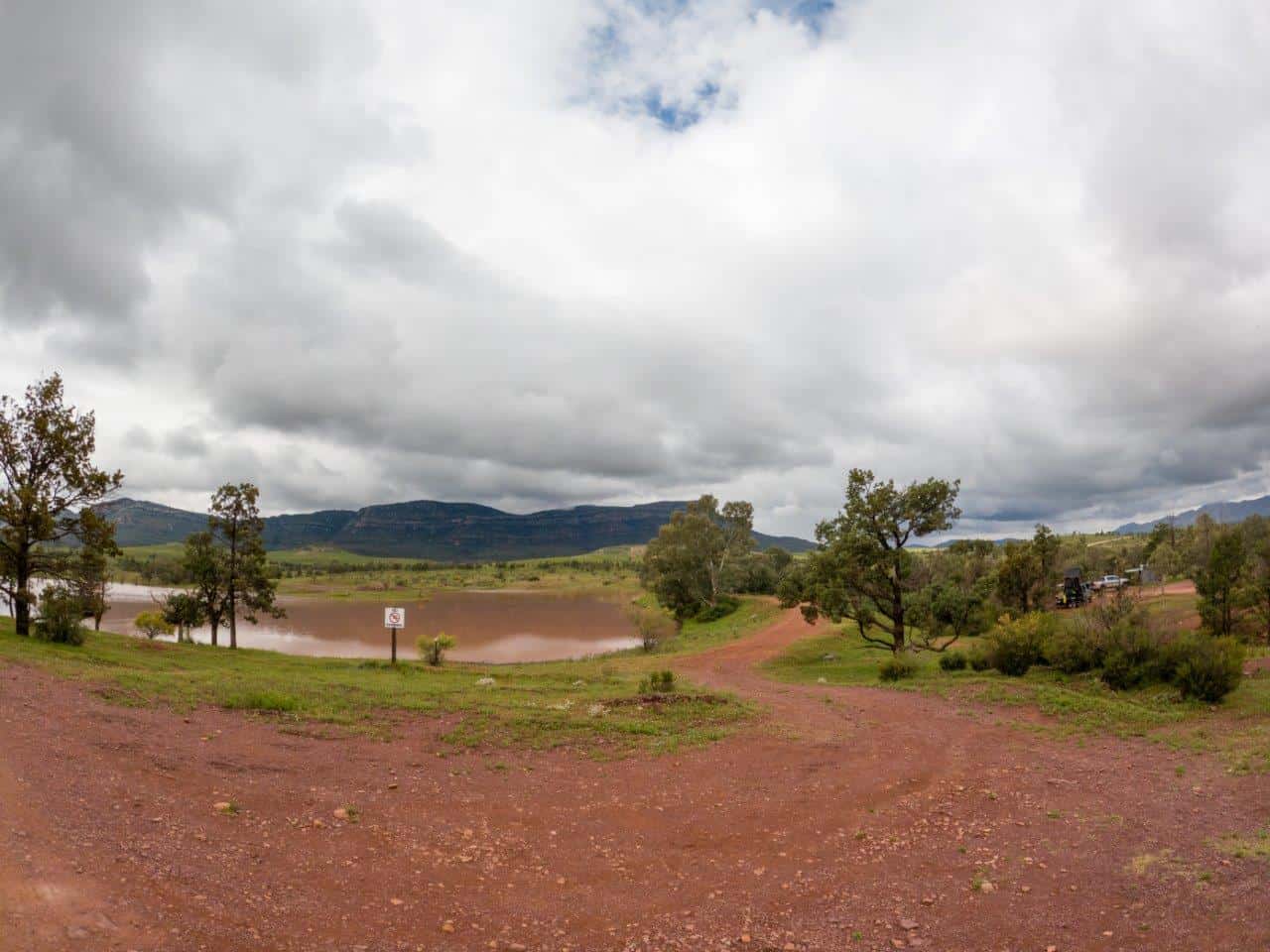 The lake at Rawnsley Park Station is quite stunning

We found a great camp site for our Reconn R2 and our folks van right next to a beautiful creek, and spent a couple of awesome days enjoying it. The scenery here, particularly on the higher sites rivals the best of what we’ve seen anywhere in the country; you look directly onto the ranges and the sun makes them a beautiful colour every night, which is pretty unique and special. 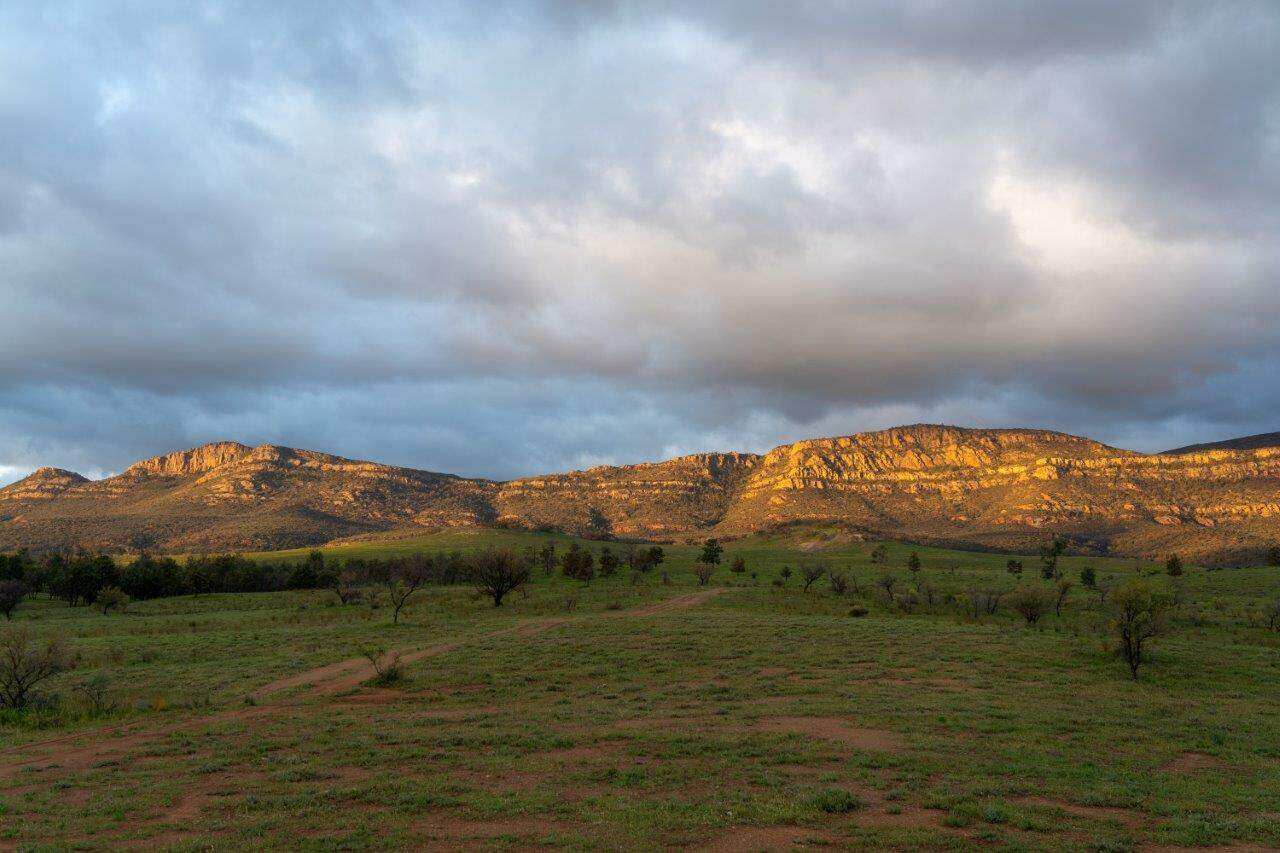 Every sunset was truly beautiful 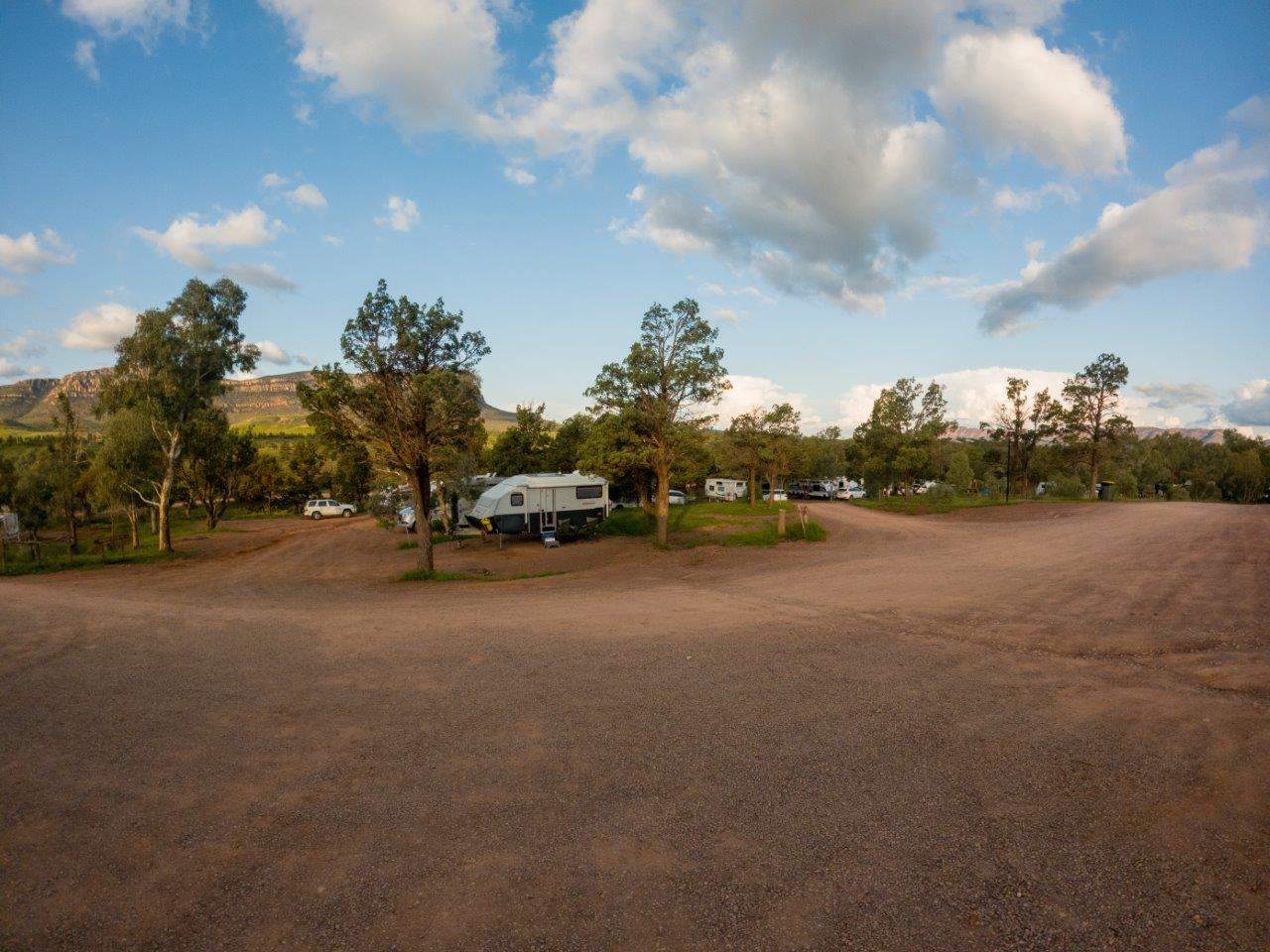 Views from the caravan park 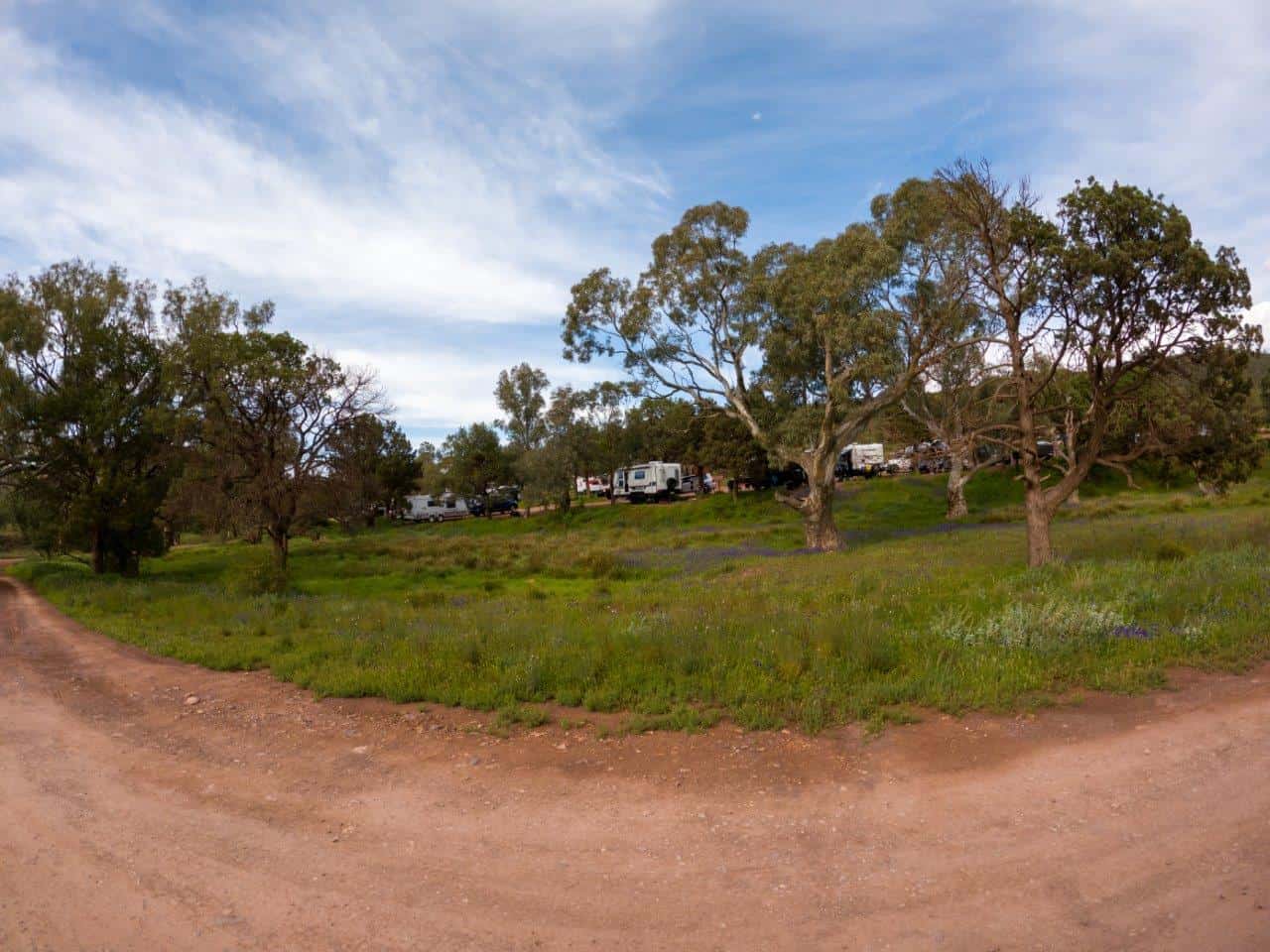 The caravan park is tiered with many different levels 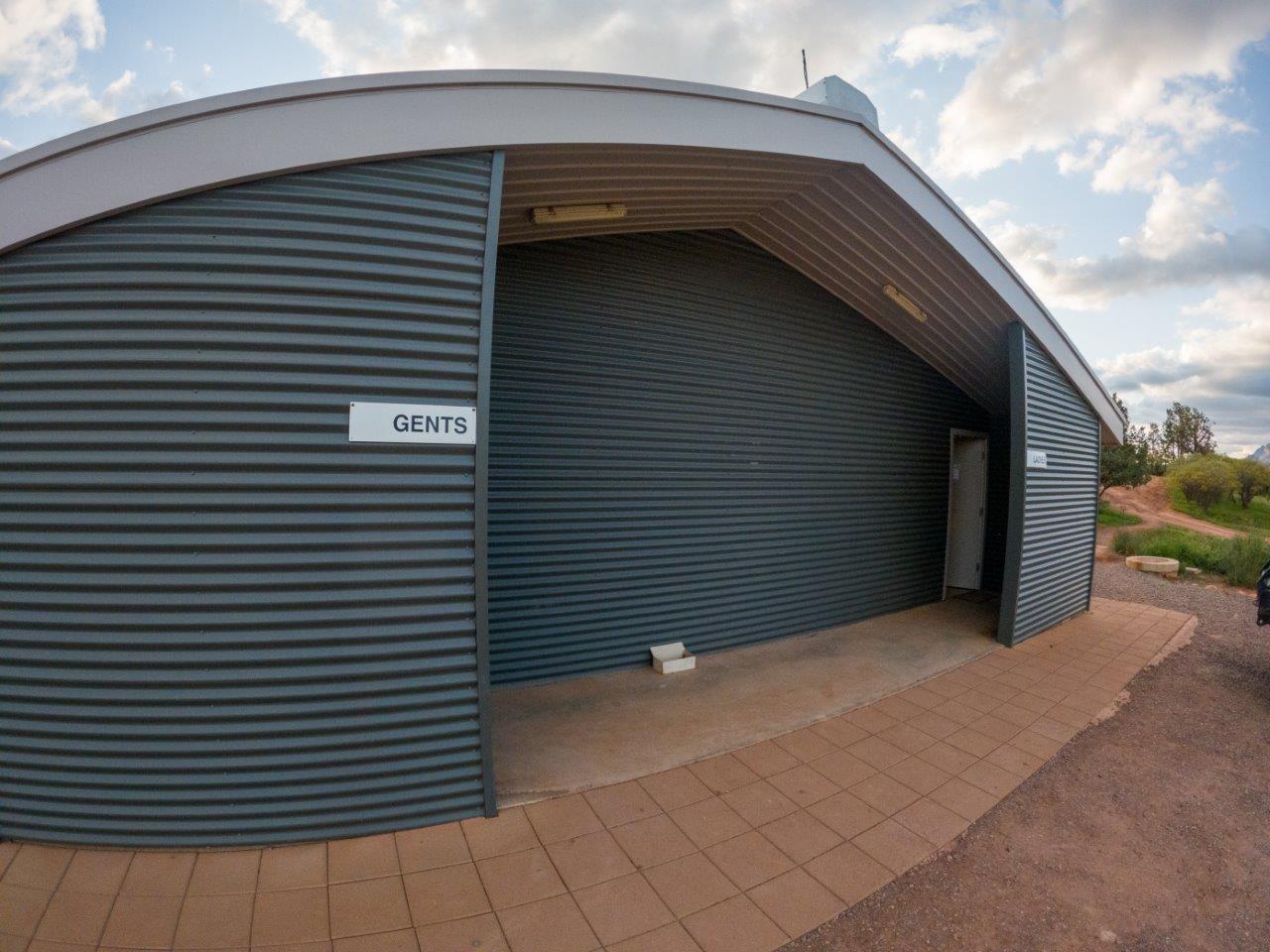 The amenities blocks are decent, and kept in good condition

Rawnsley Park Station sells diesel and unleaded, and the diesel was cheaper than Wilpena Pound just up the road, and only just more expensive than Hawker. We had to put 25 litres in as we were getting low towards the end of our Flinders trip. 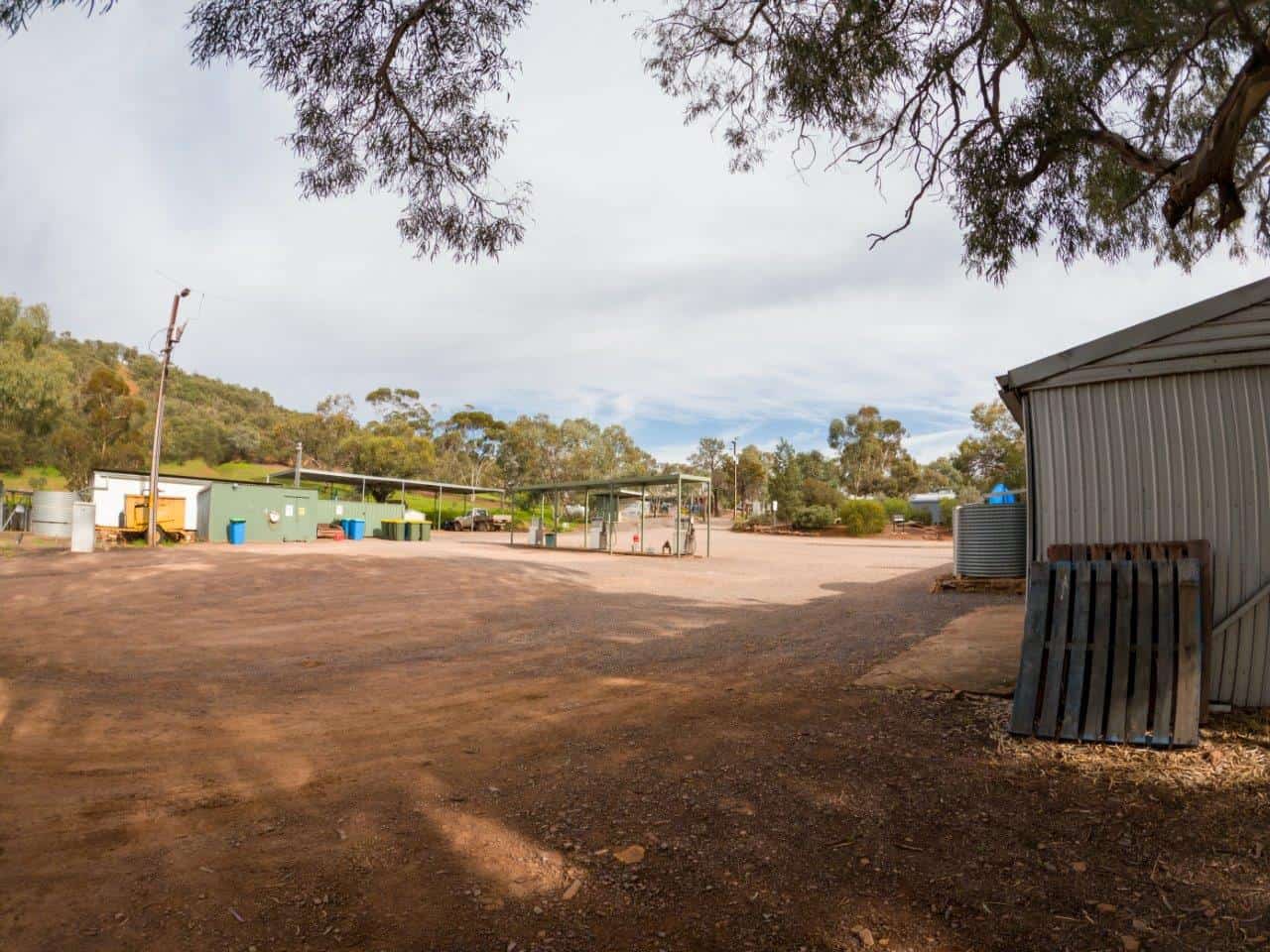 The fuel at Rawnsley Park Station was cheaper than Wilpena Pound

There’s also a high pressure cleaner that you can use to wash your car, with a 5 dollar donation being accepted towards a charity, which we were keen to make use of as our camper and 4WD were filthy from previous places and tracks in the Flinders Ranges. 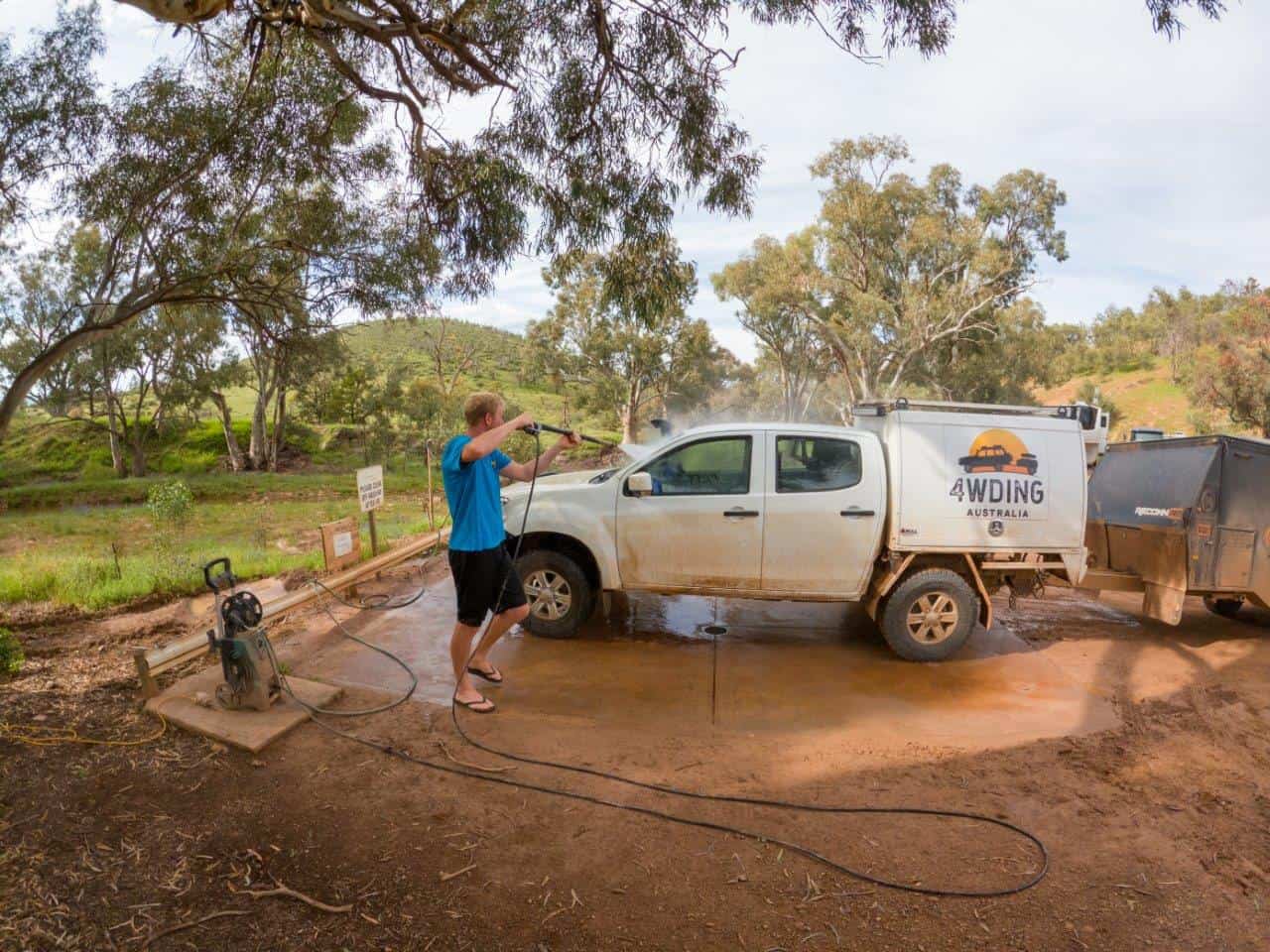 Using the pressure cleaner to tidy our 4WD and camper

What attractions are there at Rawnsley Park Station?

Rawnsley Park Station is quite big, with a number of 4WD tracks and walk trails, and when you check in they give you a list of recommended drives and places to see, which goes all the way to Parachilna Gorge, and covers the primary things people would want to see in the Flinders. 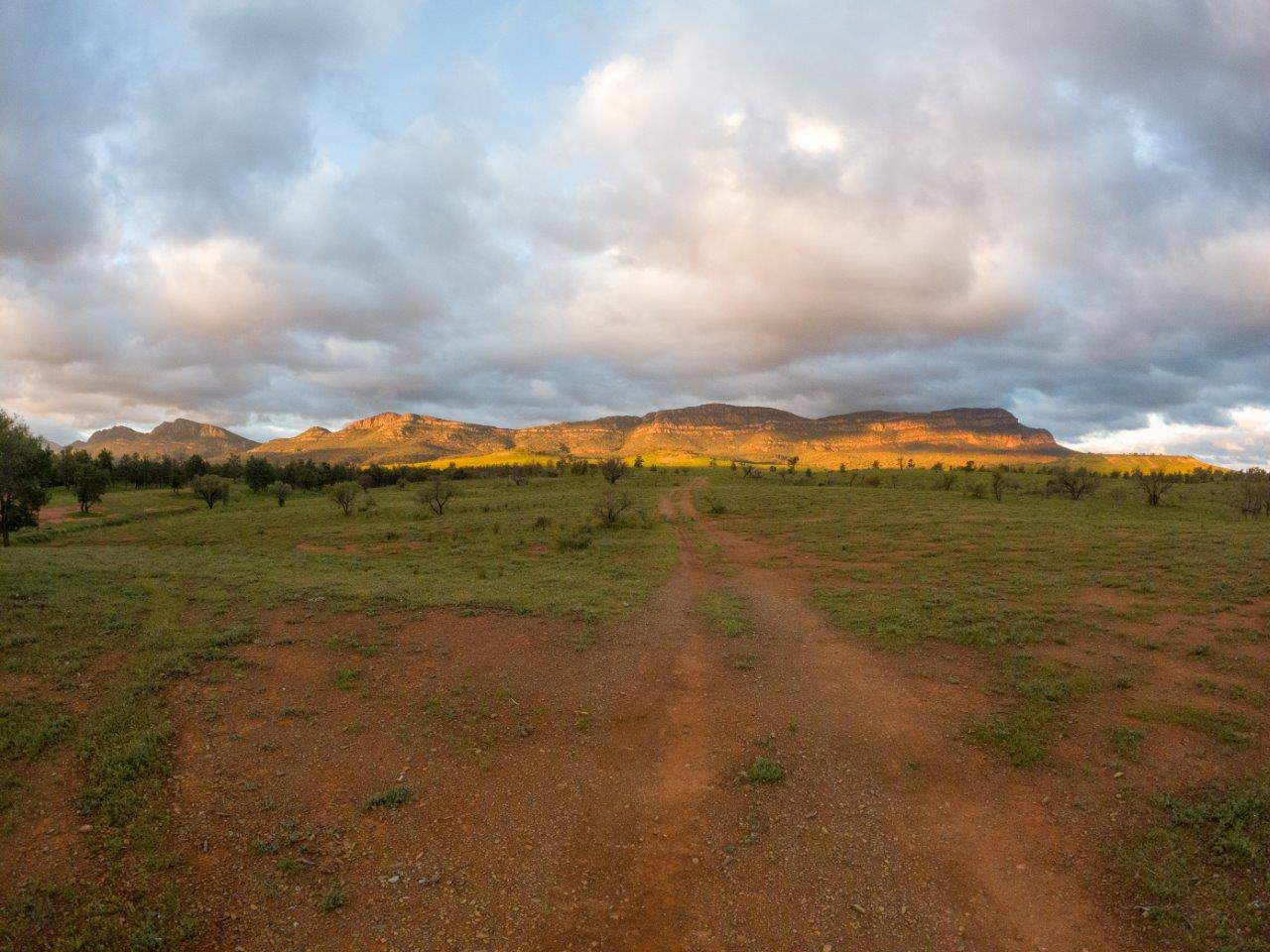 The scenery around Rawnsley Park station is really special

A large majority of the Flinders Ranges is not dog friendly, and I was really surprised to see how many dogs were at Rawnsley Park Station. I suspect they actually get a massive amount of business because they are one of the few dog friendly places in the Flinders.

It even goes as far as to offer a dog day-care for $20 per day, which is really useful for a lot of people.

This is awesome if you own a dog, or love them, but we could hear barking and dog activity from our camp site several hundred metres away, and if you were camped near noisy dogs you might not enjoy it as much.

Rawnsley Park Station has a number of 4WD tracks. Unfortunately for us, they were all closed due to recent rains and that means I can’t offer any insight into them. That said, knowing the property, views and everything else we experienced in the Flinders Ranges I’d have no doubt that they would be worth doing!

There’s a heap of walk trails from Rawnsley Park Station, and whilst we only did a couple they were really good. 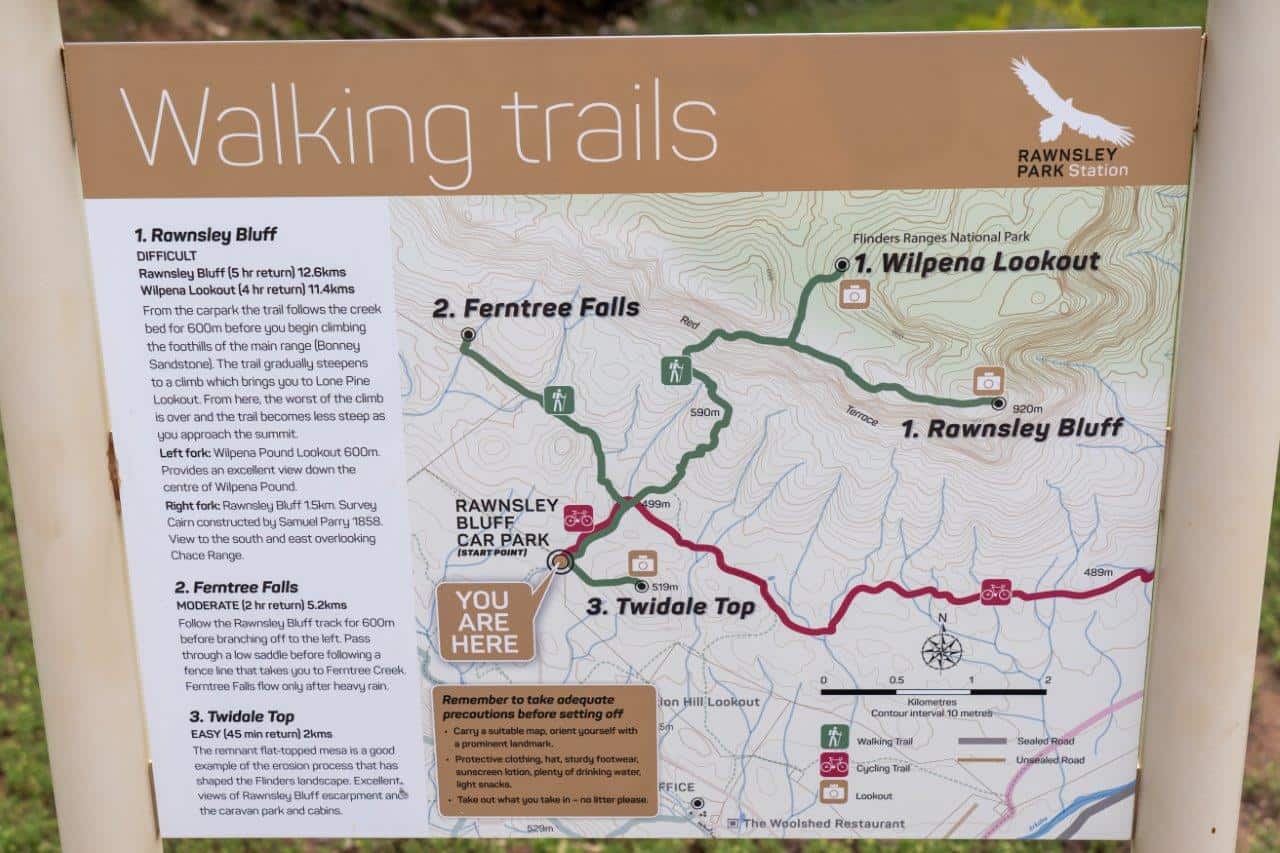 A map of the walk trails at Rawnsley Park Station

We did the walk out to Ferntree Falls, which only flows after heavy rain, and it was spectacular. The scenery around this property is stunning, and seeing the falls running was really, really special. 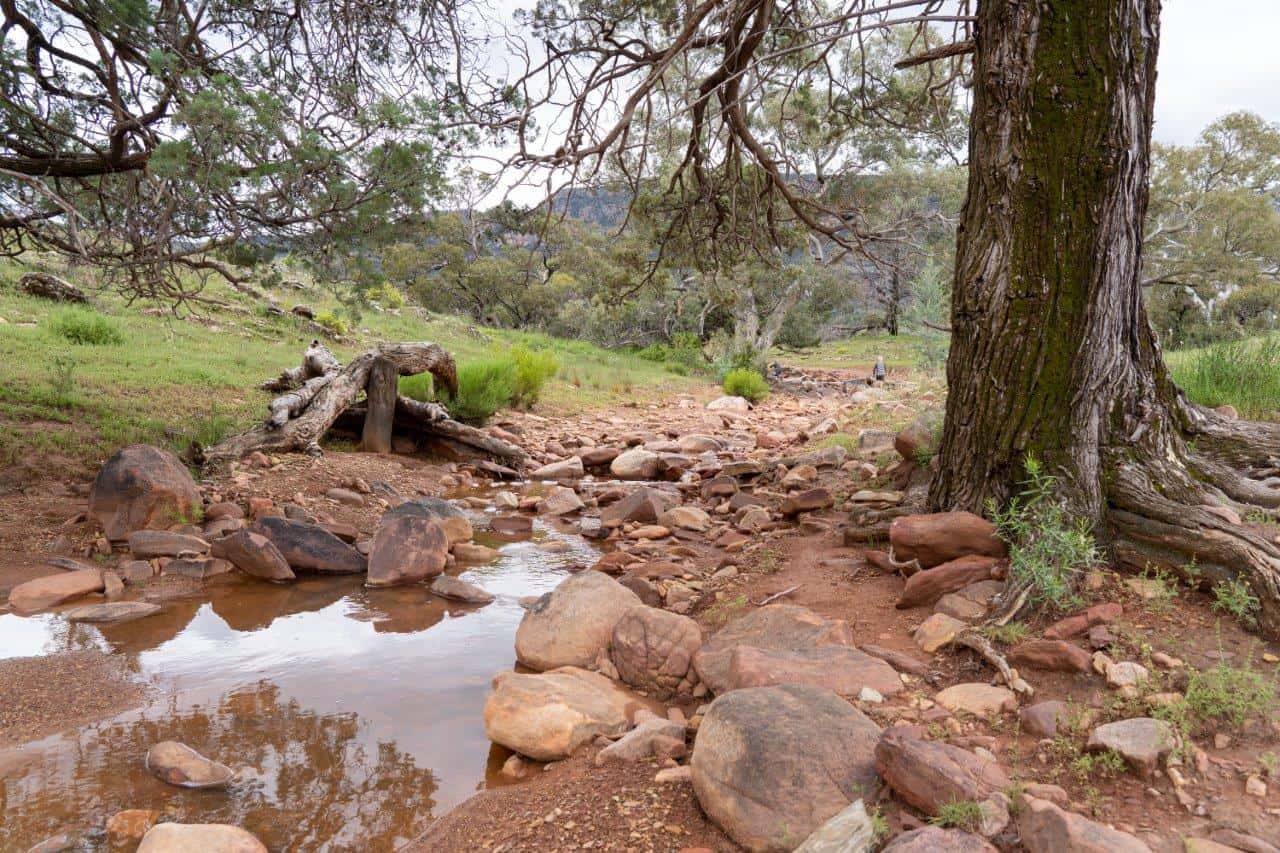 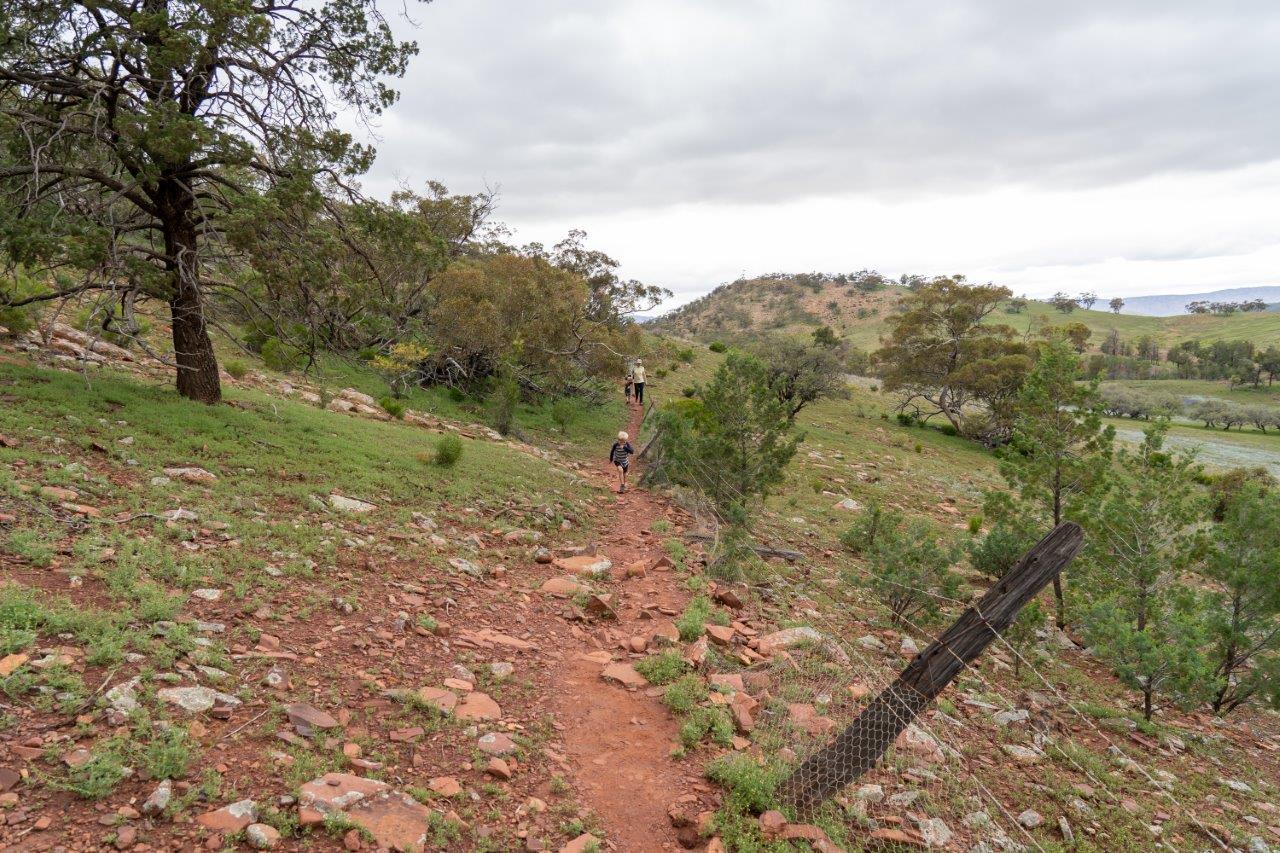 Our kids really enjoyed it too, which is half the battle 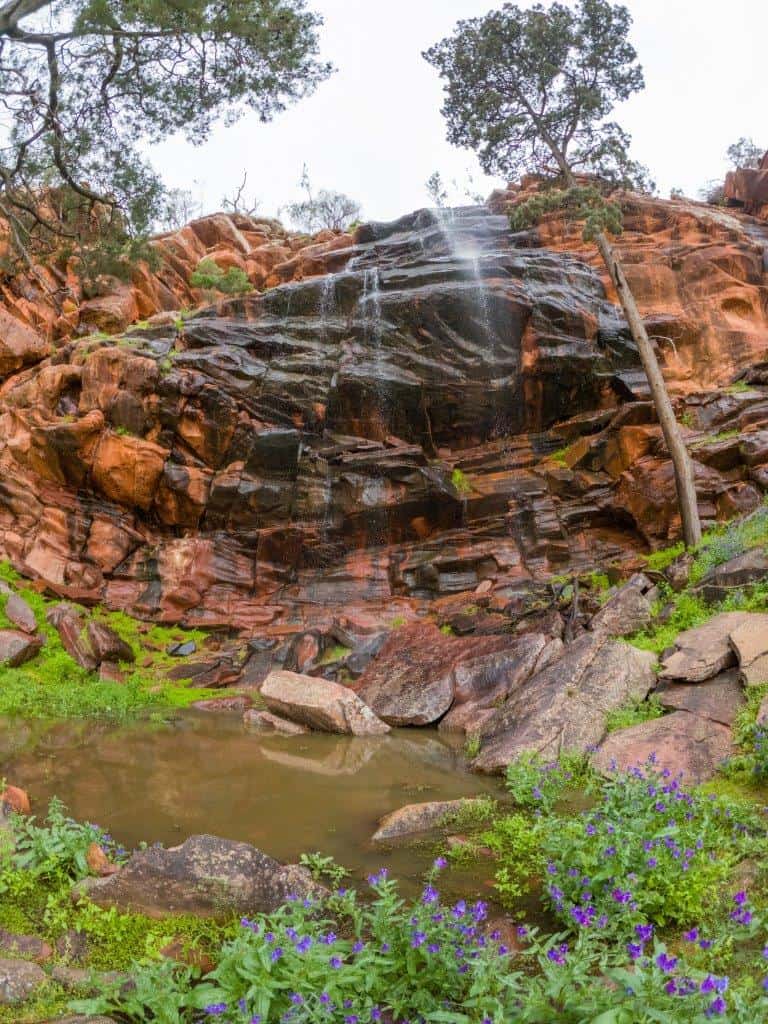 The falls were really picturesque, and hardly ever flow

Would we recommend Rawnsley Park Station?

Overall, our stay was thoroughly enjoyable, and we loved the station. I rated it much, much higher than Wilpena Pound, and thought the scenery and walks were far better. It’s got amazing views, the amenities are good and the bush camping is absolutely perfect. I wouldn’t want to camp at the Caravan Park as its far too busy with people, dogs and cars, but a lot of people do! If you are looking for camping in the Flinders Ranges though, its a great option!