On the way from Perth to South Australia, we covered a fair bit of ground fairly quickly. We stayed at Flat Rock, Woorlba Rest Area and then went straight to the Bunda Cliffs about 50km over the border. However, on the third day, before Bunda Cliffs, we decided to call in for lunch at Madura Caves, and check them out. 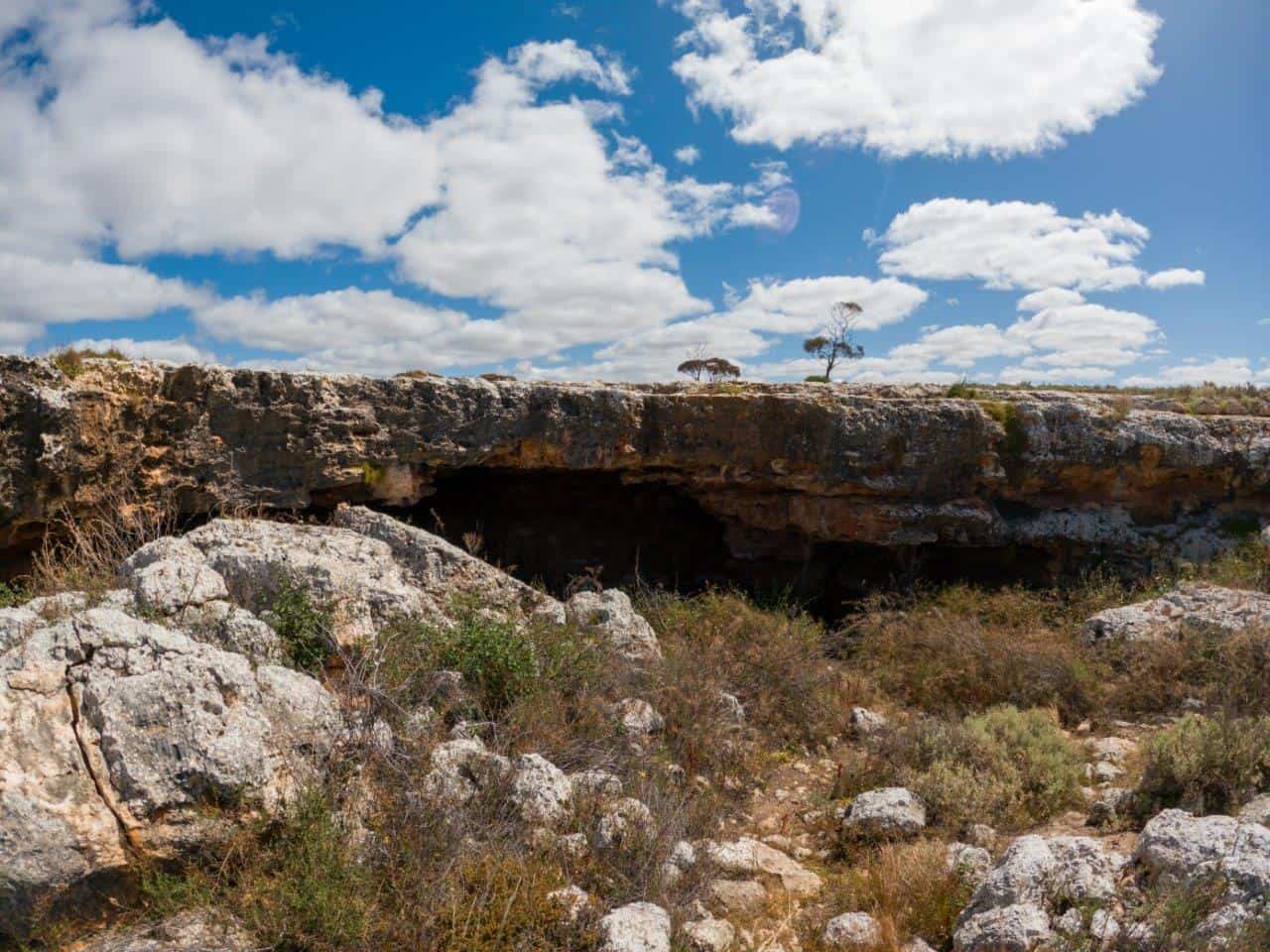 We decided to have lunch at the Madura Caves

Where are the Madura Caves?

You’ll find these caves about 10km out from the service station, along a gravel road. The track isn’t signed at all, so you need to know where you are going. Wikicamps does a pretty good job of getting you there, but watch the turn in as its easy to miss, and down a hill where a lot of big trucks roll through at speed.

Madura itself, is roughly half way between Cocklebiddy and Mundrabilla, on the south coast of WA.

The access track in is easy, and decent condition. It’s a bit rocky, and you’d be unlucky to get a puncture, but we cruised in at around 60km/h with only a couple of dips that we had to slow down for. If you get to the Dingo Gate, you’ve gone too far and have missed the turn on your left to take you in. 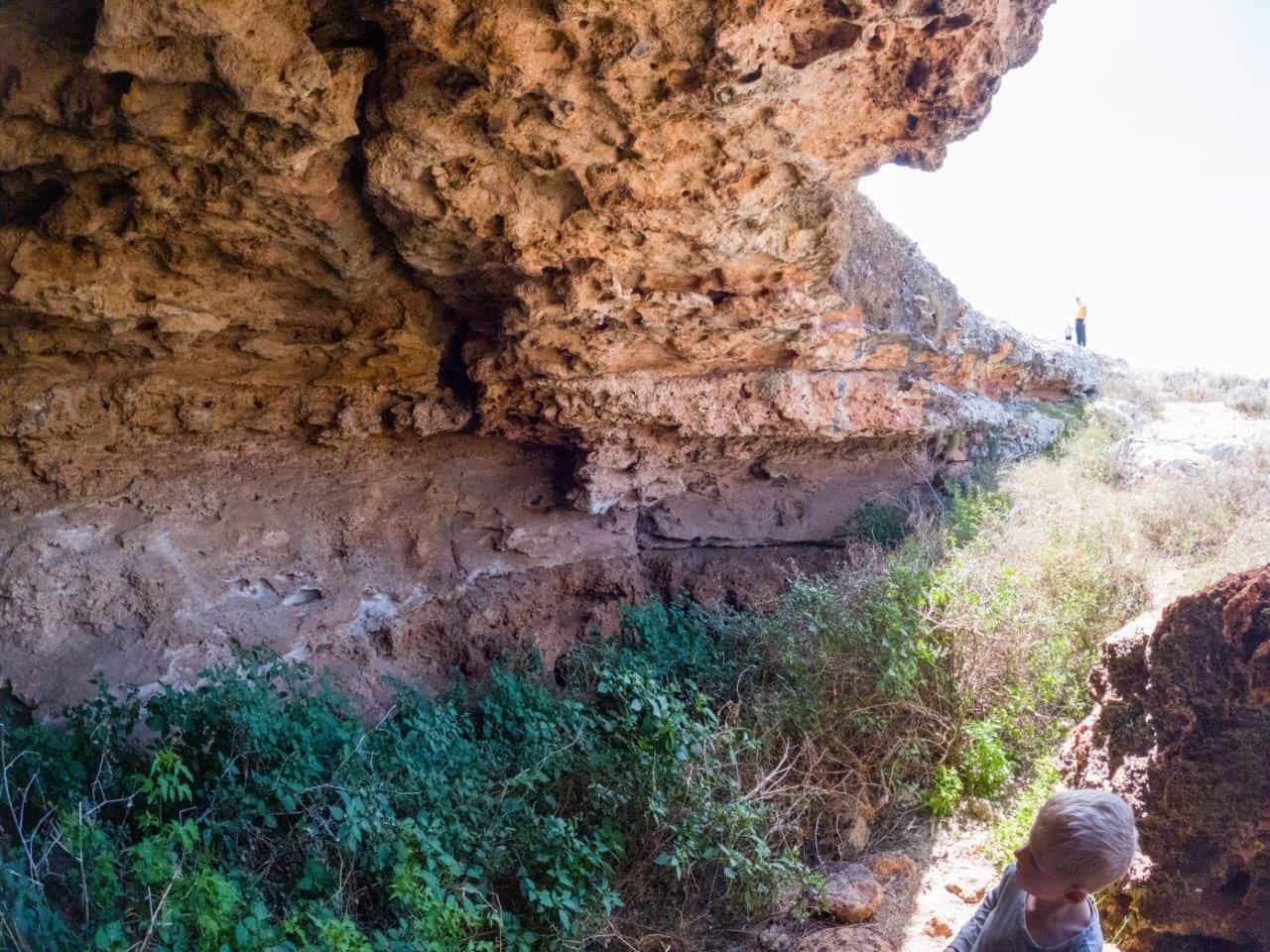 There’s two caves here that you can explore, and both are accessible from about a 50 metre walk. It doesn’t look like much on the surface, but one in particular goes a long way in, and is probably directly underneath where you park your vehicle.

The cave on the right hand side requires you to crouch down in a narrow bit (just under a metre tall) and then it opens up, and is actually pretty large inside. 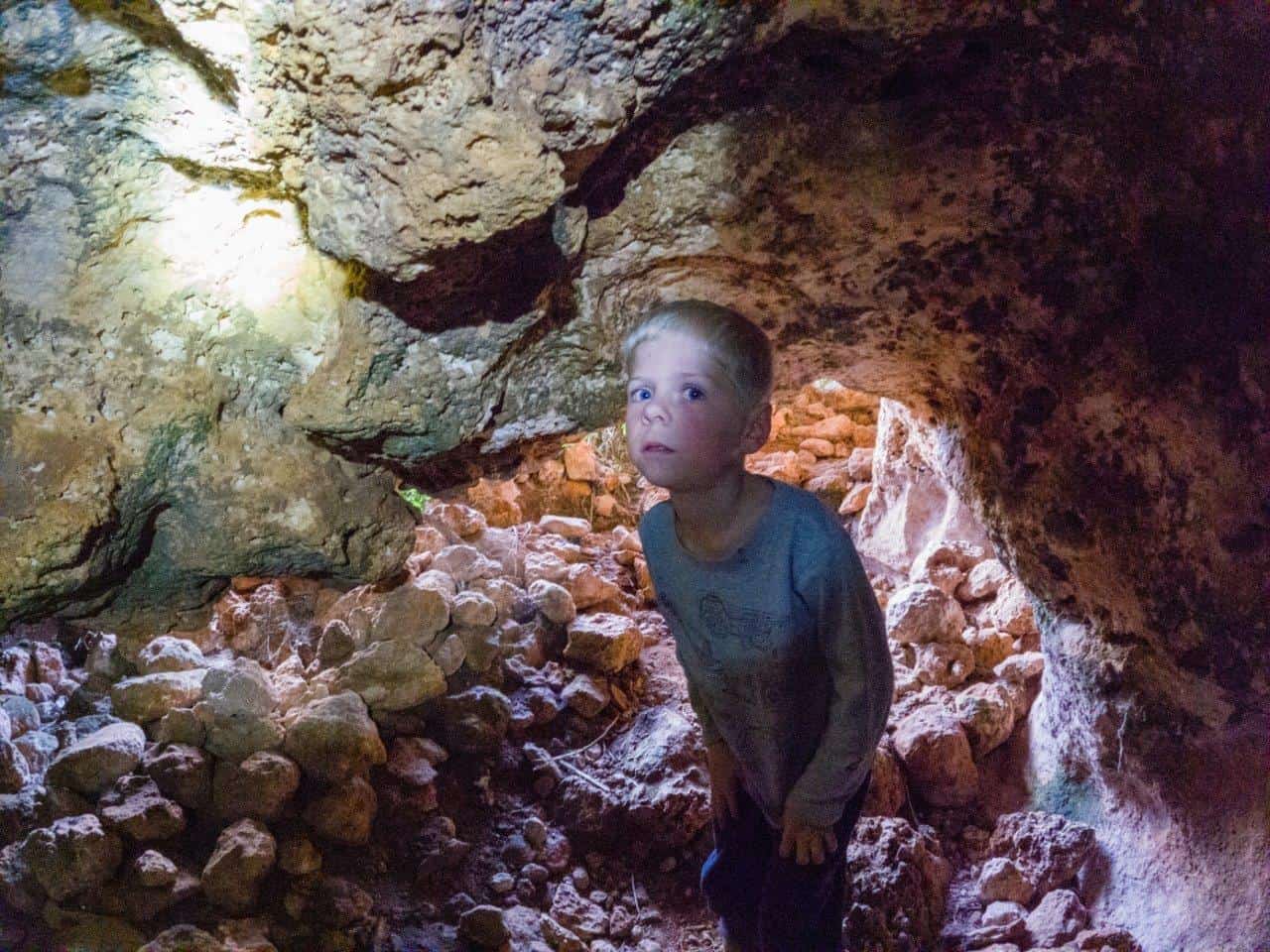 Oliver very tentatively following me in 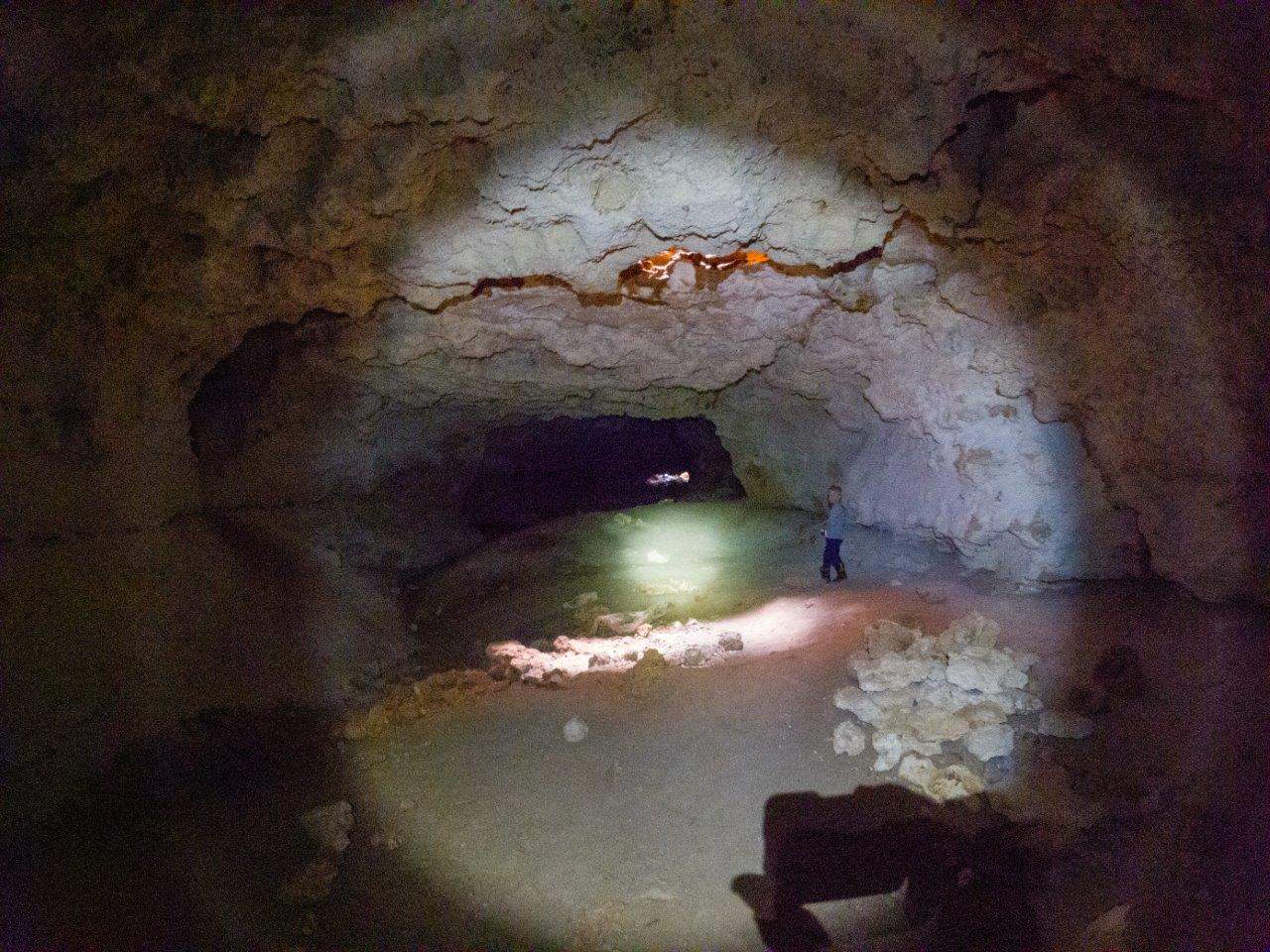 Inside the right cave is actually really big

The cave on the left you can walk into much easier, and has a heap of skeletons inside. Both caves have some sections where the light shines in, and I’d be keen to push on and see how far you can go in the right cave, but Oliver was doing his best to be brave and had enough at this stage. 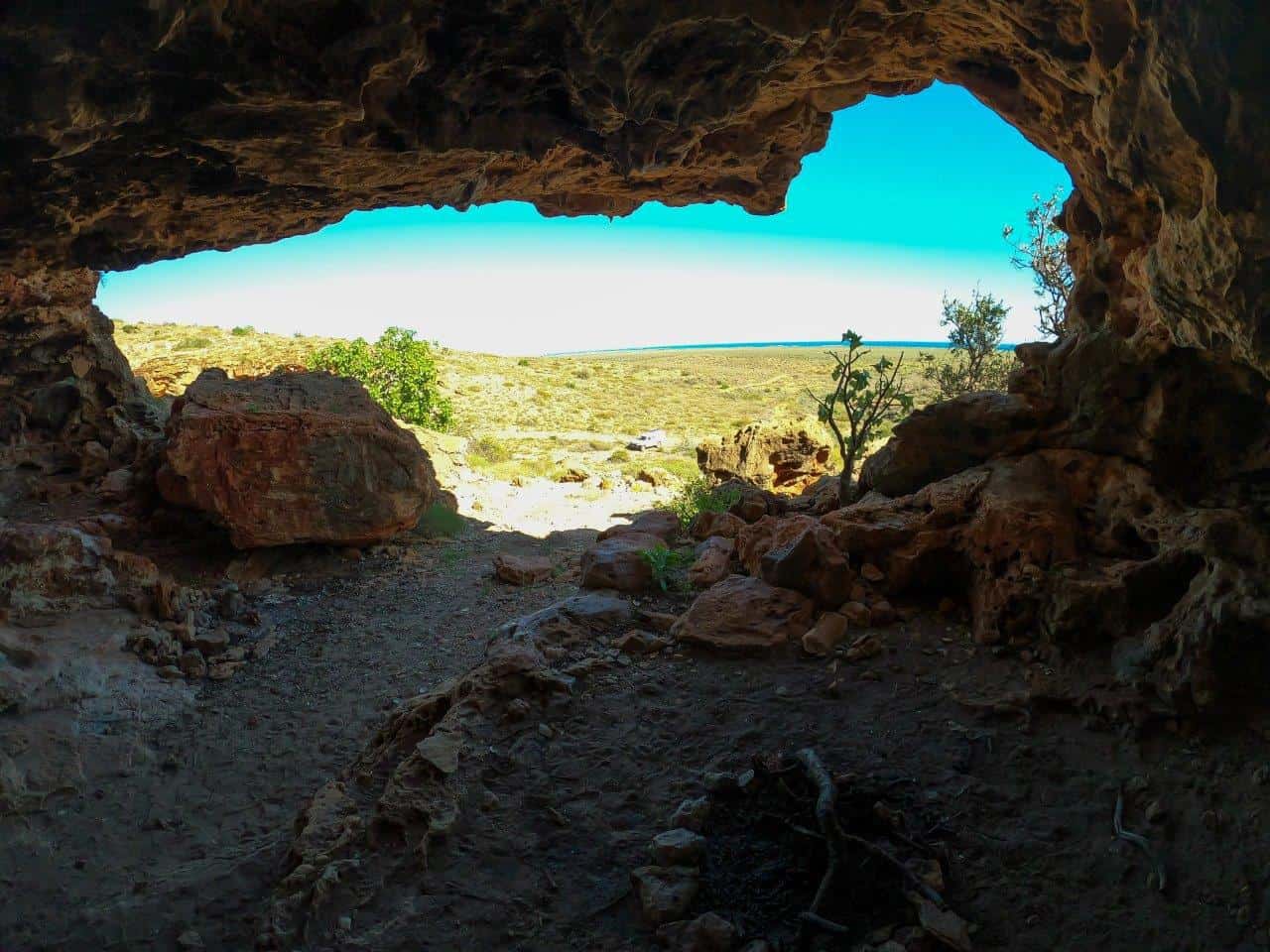 You can walk into the left one easily

Overall, they are worth a look, especially if you have young kids that haven’t seen caves before. 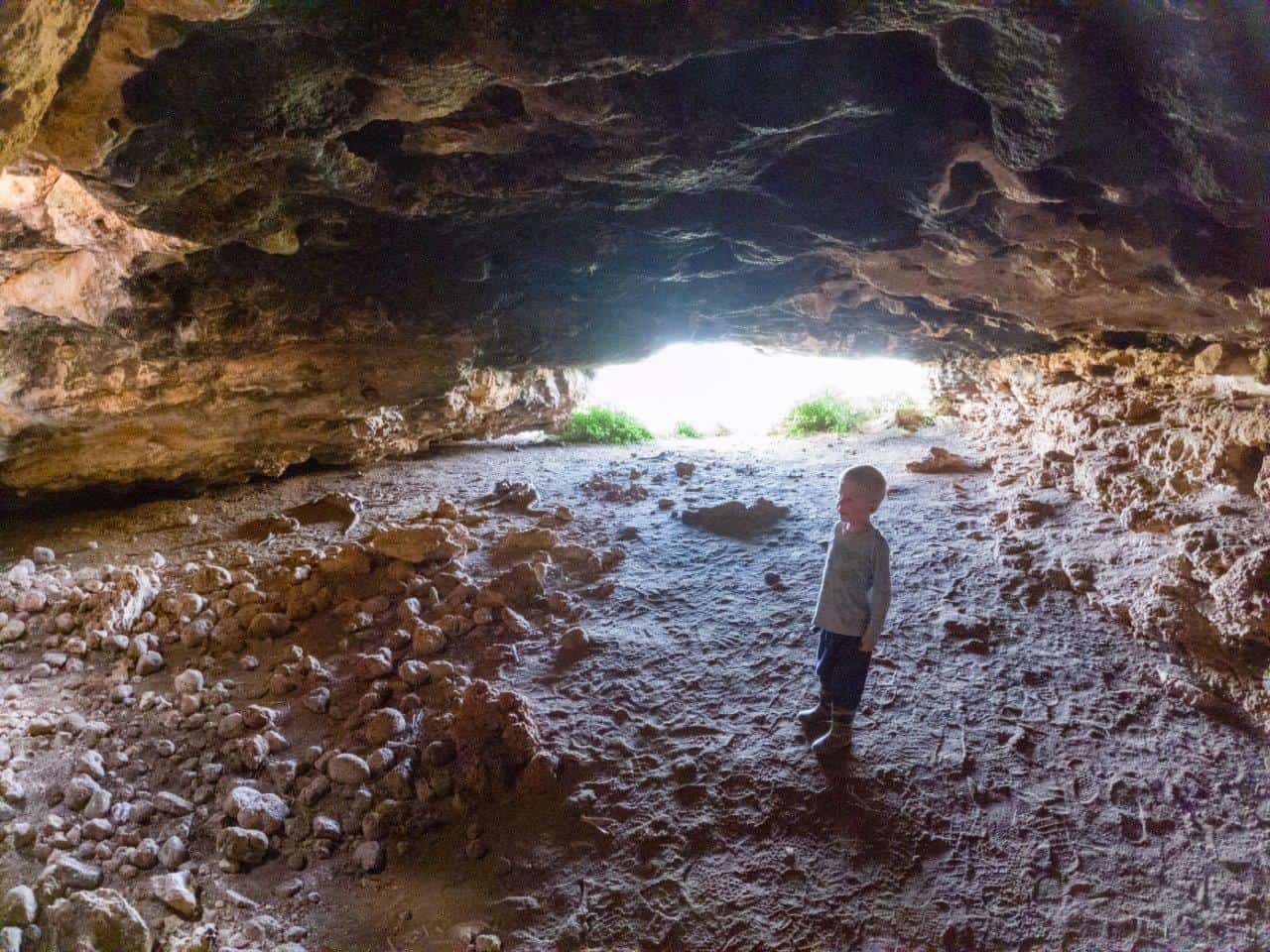 Oliver loved it once he got over his fear

Can you take a trailer or caravan in?

You can easily take a trailer or caravan in, with the turn around area at the end not that large. If there were others you’d have to do a few point turns, but its flat ground with limited vegetation and should be fine.

Watch out for snakes

Lastly, watch out for snakes. On the way in I saw a black snake that was probably a metre long slither in front of our vehicle. I did my best to avoid it, and it was gone when I hopped out to look, but they are clearly around. That one looked like a Dugite, and is not the sort of snake you want to play games with!