We’ve had lots of different electrical setups over the years, and its time to give our existing setup an overhaul. We want it set up so we can travel full time without having to peek at the battery monitors several times a day, or worry about a couple of cloudy days coming past.

Of course, this means evaluating what we currently run, and what we want to run in the future and that requires a fair bit of thought. 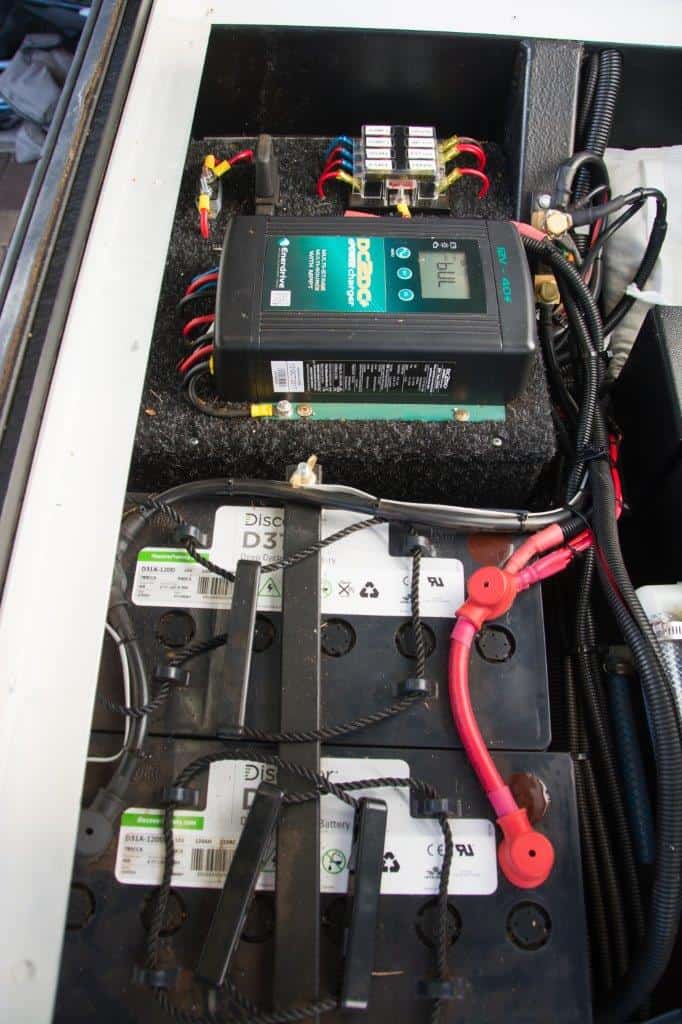 Since writing this, we’ve made a number of purchases and started on the installs.

Our Reconn R2 Hybrid has had two big lithium batteries installed, a huge inverter and solar controller, and will be getting a further 600W of solar installed on the roof. You can read more about this here – Lithium Battery and Solar Upgrade.

Essentially, we can now run virtually any appliance you would at home, which is pretty incredible.

For the Dmax, we have 230aH of lithium batteries coming, in a set of 4 cells that we’ll be building with a Daly BMS.

We are not going to be short of power for our travels!

At the moment, our Reconn R2 has two 120aH AGM batteries, one 120W fixed solar panel on the roof, and provision for a portable solar panel to be plugged into the rear. It all feeds through our Enerdrive DC2DC charger, including the power from the Dmax when we drive along.

We run an 82L freezer, which uses a fair chunk of power, and with zero charge we can get about one and a half days before we need to get power in. This works, but if you get a couple of cloudy days you will be running the 4WD to charge the camper, or hooking up and going for a drive.

Asides from the freezer, we only really run water pumps, lights, a diesel heater when its cold and occasionally a small inverter to charge laptops and camera batteries. 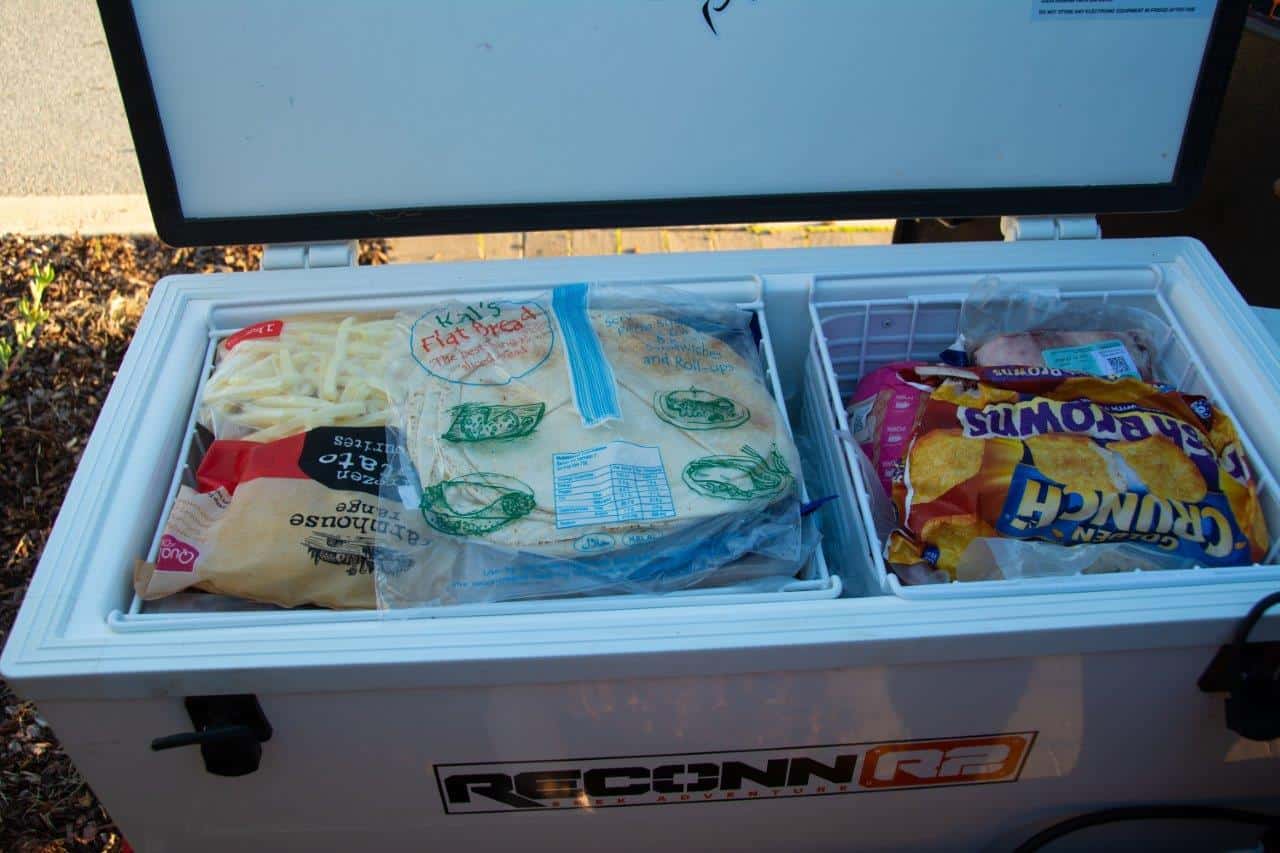 The Dmax has a 150aH AGM battery, a 200W Low Energy Developments fixed solar panel on the roof racks and charges through a Projecta DCDC for the solar and alternator input. 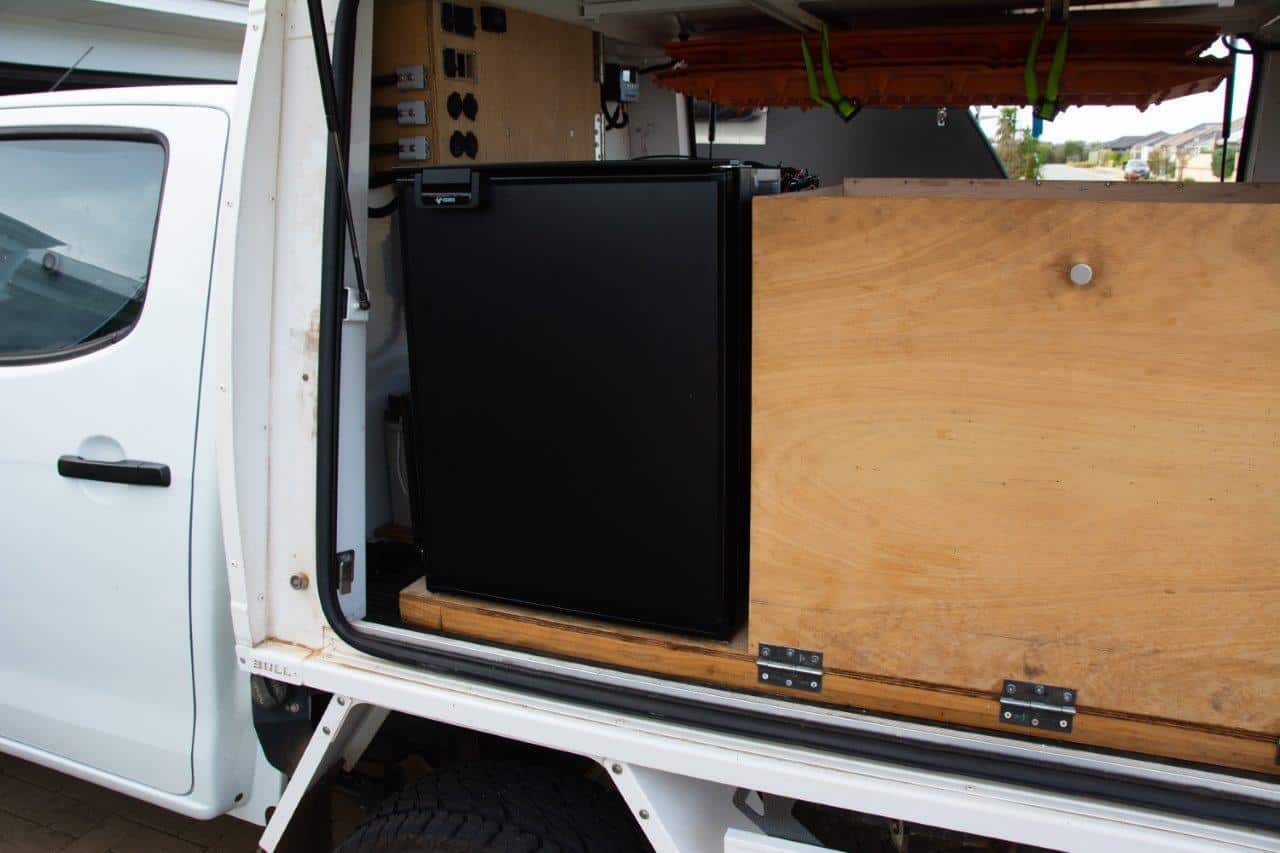 Our current setup in the Dmax with 150aH AGM battery

What else do we want to run?

Right now, we are considering what appliances we want to actually run, and what we’d need to run them. We will make the change from AGM to Lithium batteries at some stage, and the Camper batteries are probably nearing end of life, with the Dmax one potentially quite a bit left in it.

We’ve been considering 4 appliances that would hugely increase our consumption:

Being able to warm up left overs, or cook things in a hurry would be convenient, but we are conscious of the additional weight, the likelihood of it breaking (as they aren’t really designed for off road use!), and whether we actually need it. Even our microwave at home doesn’t get used that much, and we feel its probably not worth getting.

I like the idea of having a 12V oven in the car that we can cook meals on the road in. I also like the idea of it not costing anything to run, and there being no setup time. The Weber is amazing, but its annoying to set up and it uses gas, which you have to refill more often. You also can’t really leave it cooking while you head off for the day, which you could with a Travel Buddy.

Again, these aren’t the lightest things in the world, and Sarah really questions how often we would actually use it given you try and reduce the number of long days travelling long term anyway.

If you haven’t heard of the Big Bertha, its a similar unit to the Australian made Travel Buddy, but is much larger and has two heating elements.

Our Reconn R2 has a 14L Truma hot water system, but its only plumbed to the shower and not the kitchen. To be honest I don’t see the point of warming 14L of water just so you can do the dishes anyway, but these (like all water heaters) use a fair chunk of gas and with the change to lithium batteries and big solar arrays I’m surprised more people haven’t gone with electric hot water systems.

If you can run a microwave, or an induction cook top, you can most certainly run a 12V water heater, and I really like the idea of them. Again, they are free to run, simple and you can even DIY a heap of different options.

Again, we question whether this is really necessary given we have the gas heater already. We could replace the gas heater, but if you had a few cloudy days would it then mean you can’t have a hot shower easily?

I guess the ultimate solution would be to swap it out for the gas/electric option (which could have been done when it was built but its marginally more expensive), and then you’d have the option of running it on gas or electric.

We could then plumb this to the kitchen as well, and have hot water for both, completely free of charge when the sun is shining. This would work just fine, as we don’t really shower after dark outdoors anyway because its generally too cold. It’s just one of the disadvantages of an outdoor shower! 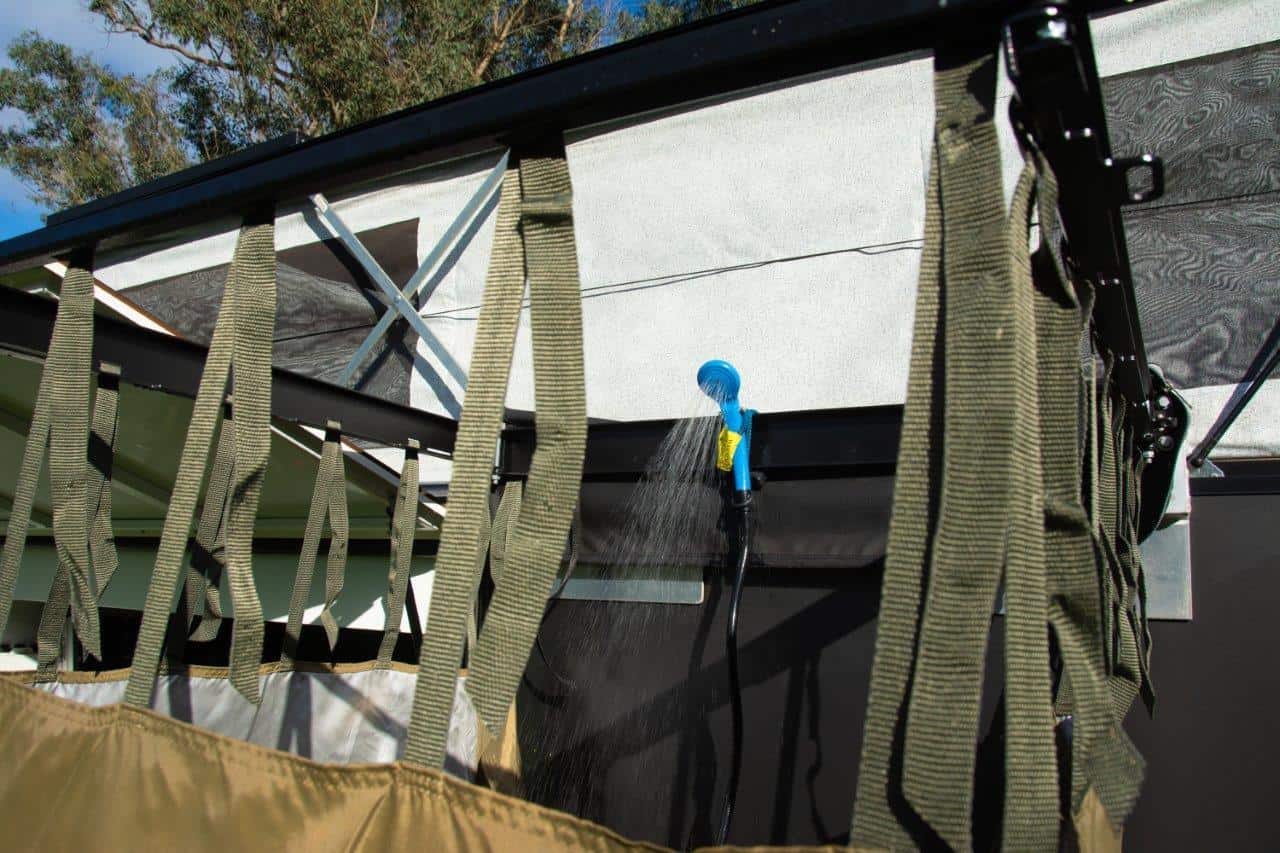 Our hot water system could do with an overhaul, and solar powered hot water would be amazing

Last but not least, I was really thinking of being able to run an induction cook top in the Dmax and/or camper trailer. The main reason would be to overcome the wind that can be a problem using an outdoor kitchen.

Cooking outdoors when its windy can be a total nightmare, and an induction cook top overcomes this completely.

I’ve pretty much ruled an induction cook top out for both the Dmax and Camper though, because the cost of batteries and electrical gear associated with running it is significant, and at the end of the day almost unnecessary when we already have a portable gas burner in the Dmax and fixed one in the Reconn R2.

Many of you would have heard the KISS principle, and none of the appliances above are actually a must have, especially when we are already well set up and are relatively happy with our setup. All we really need is a battery system and solar that will cope even with terrible weather.

For now, I’m thinking we might leave the Dmax setup alone until the AGM fails and then we’ll put a lithium battery in and replace the Projecta charger (which doesn’t have a lithium profile).

For the Reconn R2, we’ll ditch the two AGM’s and replace it with two, or three lithium batteries (somewhere around 200 – 300aH). I like the idea of the Enerdrive high voltage (37V) solar panels for $380 each, and will probably put 3 of them on the roof of the camper, and remove the existing 120W unit that is currently up there.

This would give us ample room for expansion and running larger appliances down the track, and mean we never have to worry about our batteries state of charge again!

If I decide to swap the hot water unit out with an electric/gas unit I’ll be able to run it just by purchasing a big inverter, and that goes for the induction cook top too. 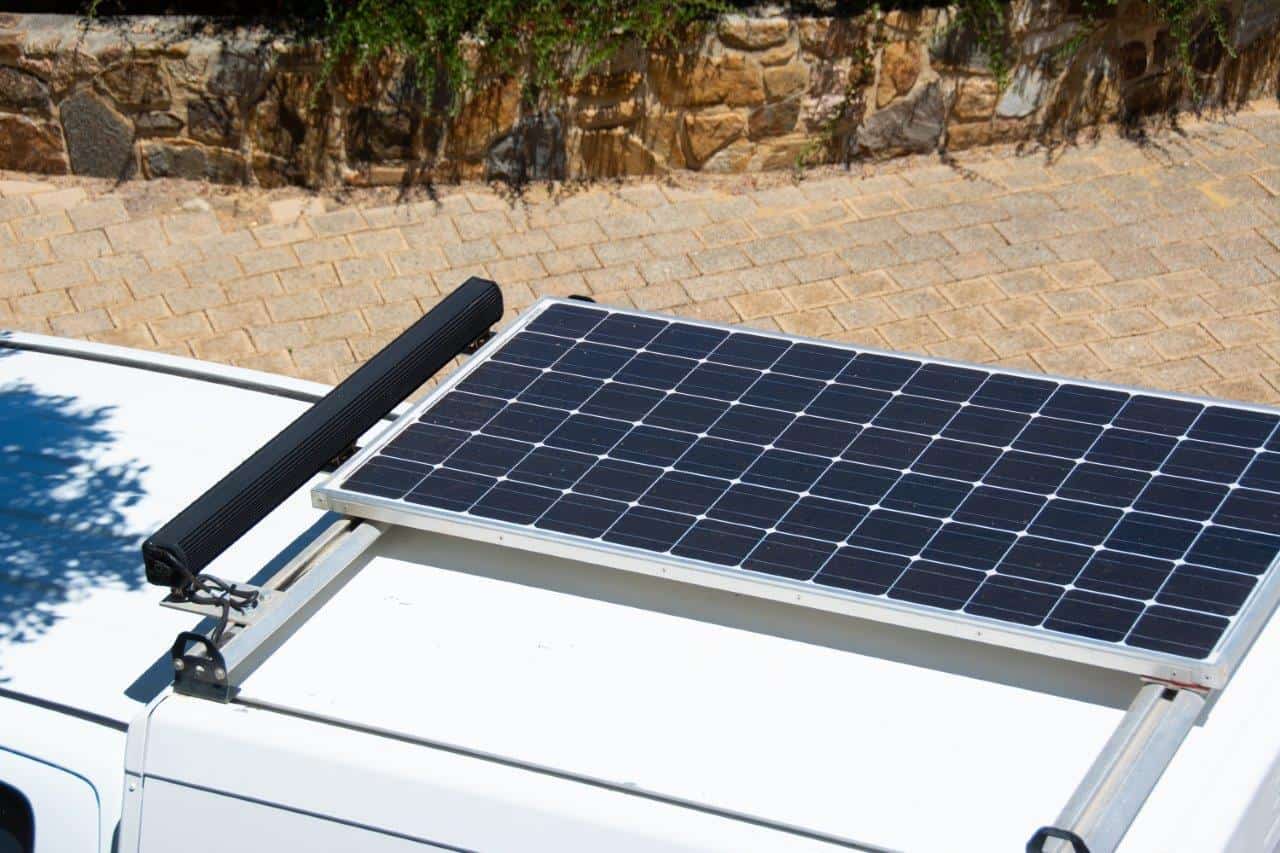 There’s nothing worse than worrying about solar power!

What’s your thoughts? What do you really need for long term travel?