Every single 4WD out there has its list of shortcomings, and whether the owner wants to admit it or not, you’ll always be able to find a number of things that should have been done better by the manufacturer.

For the Isuzu Dmax prior to the new shape in 2020, the aircon has a nasty habit of failing, and in a relatively big way.

When we purchased our Dmax, I knew some of the shortcomings, but not the aircon issue, and to be completely honest, ever since finding out about it I’ve been waiting for the day that our Dmax aircon would stop working.

I’d been waiting for our aircon to fail

That day happened not so long ago, after a day out with the family. We hopped back in the car and could tell pretty quickly that the aircon wasn’t doing what it was supposed to. I booked it in for a service a day later, and mentioned the aircon, and that it was likely in need of some major attention.

What fails on the Dmax aircon?

Put simply, there’s an aircon pipe that runs from the engine bay through the dash and to the evaporator, which vibrates and eventually results in the evaporator cracking, and then the 134A gas required for the aircon cooling leaks out, and your aircon stops being able to produce cold air. 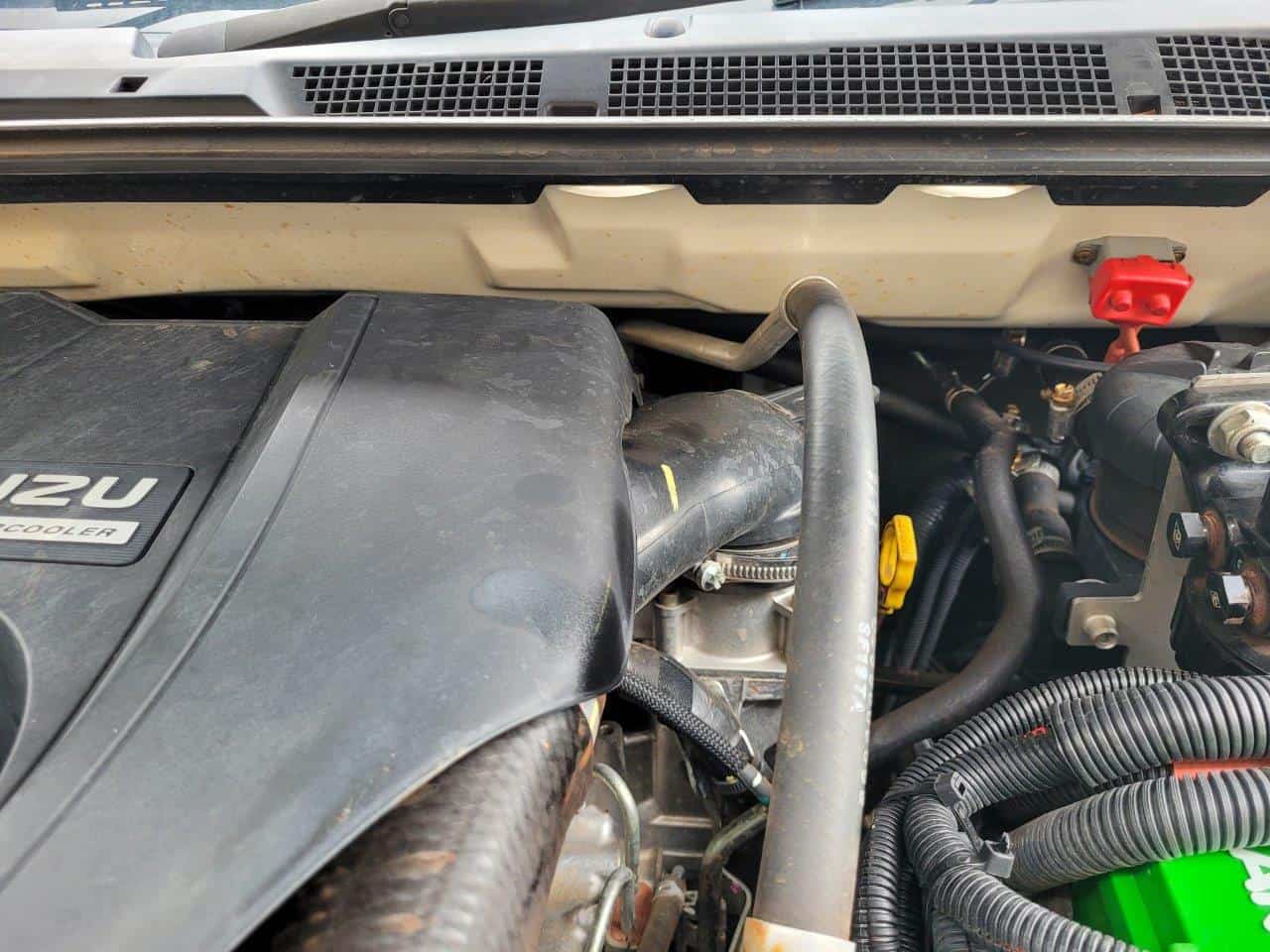 This stems from insufficient support, and there are now companies selling brackets that you can install to provide additional support. I’ve also seen a number of people installing P clamps against the firewall to prevent it from moving.

Apparently the new Dmax and BT50’s actually come with a clamp from the factory (2021 models and beyond). I was also told that if you fit an aftermarket unit you’ll likely have no further issues, as they are a different design.

This is a common problem, and I’ve seen a number of people go through 3 or 4 evaporators, with hundreds of posts about it on the Isuzu Facebook groups. If I had to guess, I’d say Isuzu would have replaced more than a thousand of these in Australia by now, if not more.

What does it a new evaporator cost?

To get the evaporator replaced, you are looking at anywhere from $1000 – $2300 including labour, depending on where it gets done, and how much you get ripped off. Isuzu in Bibra Lake quoted $1420 to do the job, including 6 hours of labour, parts and GST.

Does Isuzu warranty cover the work?

If your vehicle is under warranty, you’ll get these jobs covered, which is a good thing as its not cheap. I’ve read a number of people complaining about the dashboards being damaged while the work is being done, which isn’t great, and can create another talking point to your local Isuzu Dealer.

How long is the repair?

Our Isuzu dealer quoted 6 – 7 hours to do the job, as you have to remove the dashboard to get access. Lovely.

For general servicing and fault finding, you’ll probably find most people will recommend an independent mechanic over a dealer. However, we’ve had pretty good service from our Isuzu dealership, and given that they’ve done this very job a number of times, I figured it would be better to get them to do it than an independent mechanic, who may have never done this job before.

That said, I did rear a number of people have done it themselves, or had auto electricians do the job as well. It’s not so much difficult as it is time consuming and fiddly.

Either way, it’s probably a good idea to find someone who’s done this exact job at least once before! 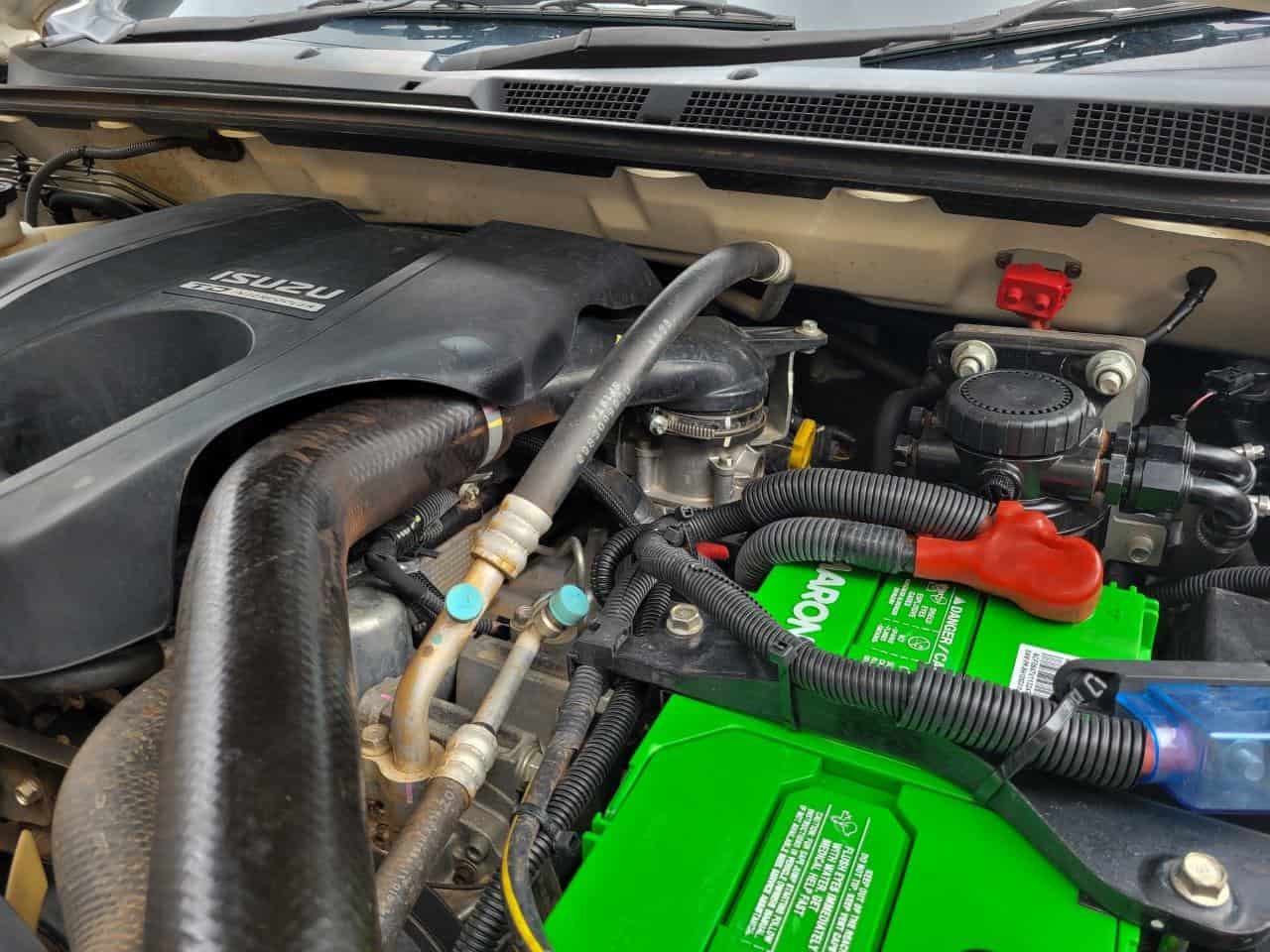 Take it somewhere that has done a few of these before

What if its out of warranty?

When I booked it in, I made a point of asking if it would be covered by warranty, and was met with no reply.

In my opinion, an aircon should last longer than 6 years, and given its a common design flaw by Isuzu, I was prepared to push hard for it. Consumer law states that anything you buy should do what a ‘reasonable person would expect it to do’. I don’t think its reasonable to expect your aircon to break so early on in a new vehicle. 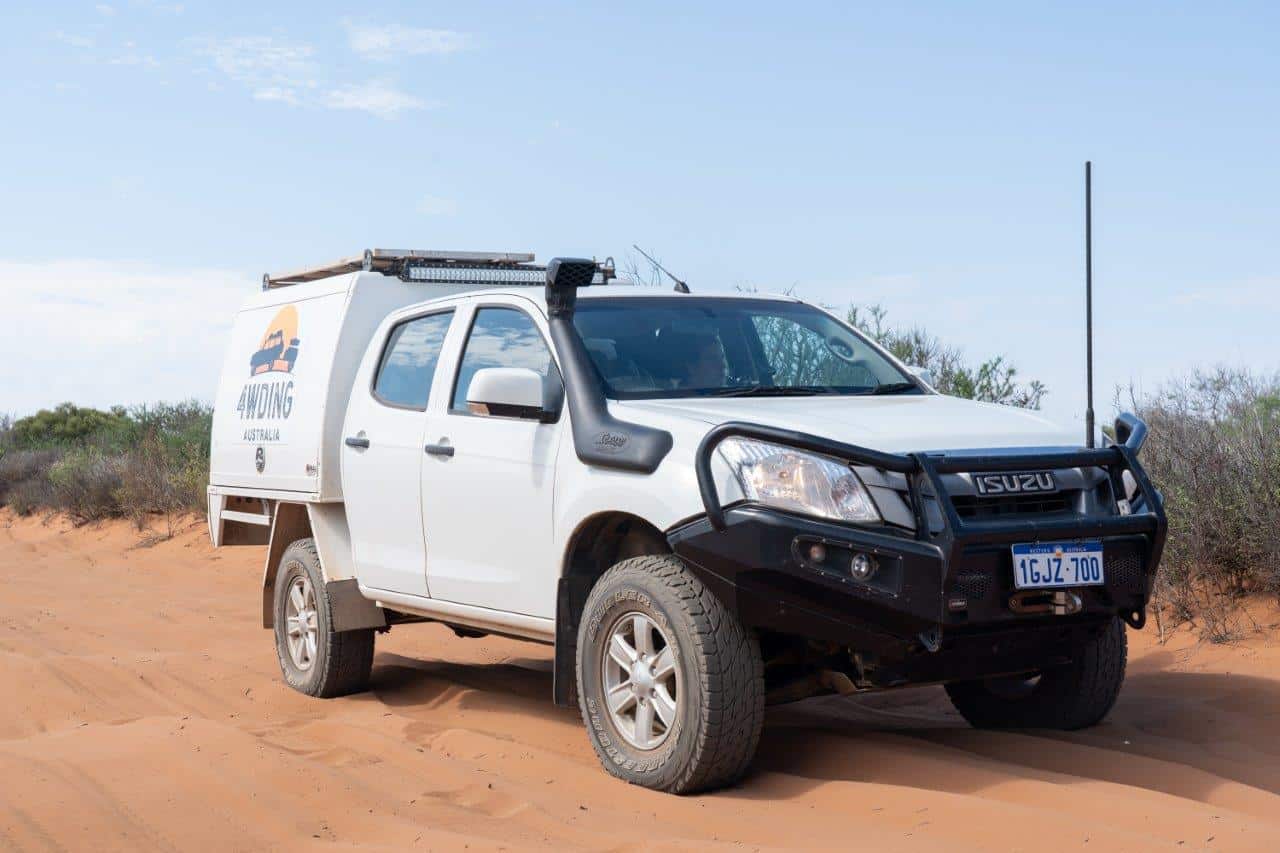 Was it covered by warranty?

I’ve had a pretty good relationship with Bibra Lake Isuzu. They’ve done a good job maintaining the vehicle, are generally very helpful and have only had a couple of minor issues (the cleaner knocked our vehicle into 4WD and I didn’t realise, and they messed up a hire car on one occasion). Overall I’m very happy with them, and wouldn’t keep taking my vehicle to them if I wasn’t.

I rang Isuzu the next morning, expecting to have a big fight about consumer guarantee, and how I was prepared to take it all the way to the ACCC if needed. Surprisingly, the lady on the other end explained that the dealer has the ability to lodge an after sales adjustment, where they cover the failure in good faith, and that she couldn’t see anything had been lodged.

She explained that she would request it, and I’d be contacted again. A couple of hours later I was told the paperwork was done, and I’d have a decision in 24 hours.

Now, I was prepared to take this all the way as needed, and the outcome would be shared on this very blog regardless, which would not reflect well on Isuzu. As far as I’m concerned its a known, major fault and even if it was well out of warranty a normal person would expect it to last longer, and as such they should fix it regardless.

The short of it, is I got a call back that same day from head office saying its gone through as 100% covered, and I’d receive confirmation shortly.

The vehicle was picked up with a new evaporator installed, our aircon works and Isuzu covered the replacement (as they should have). 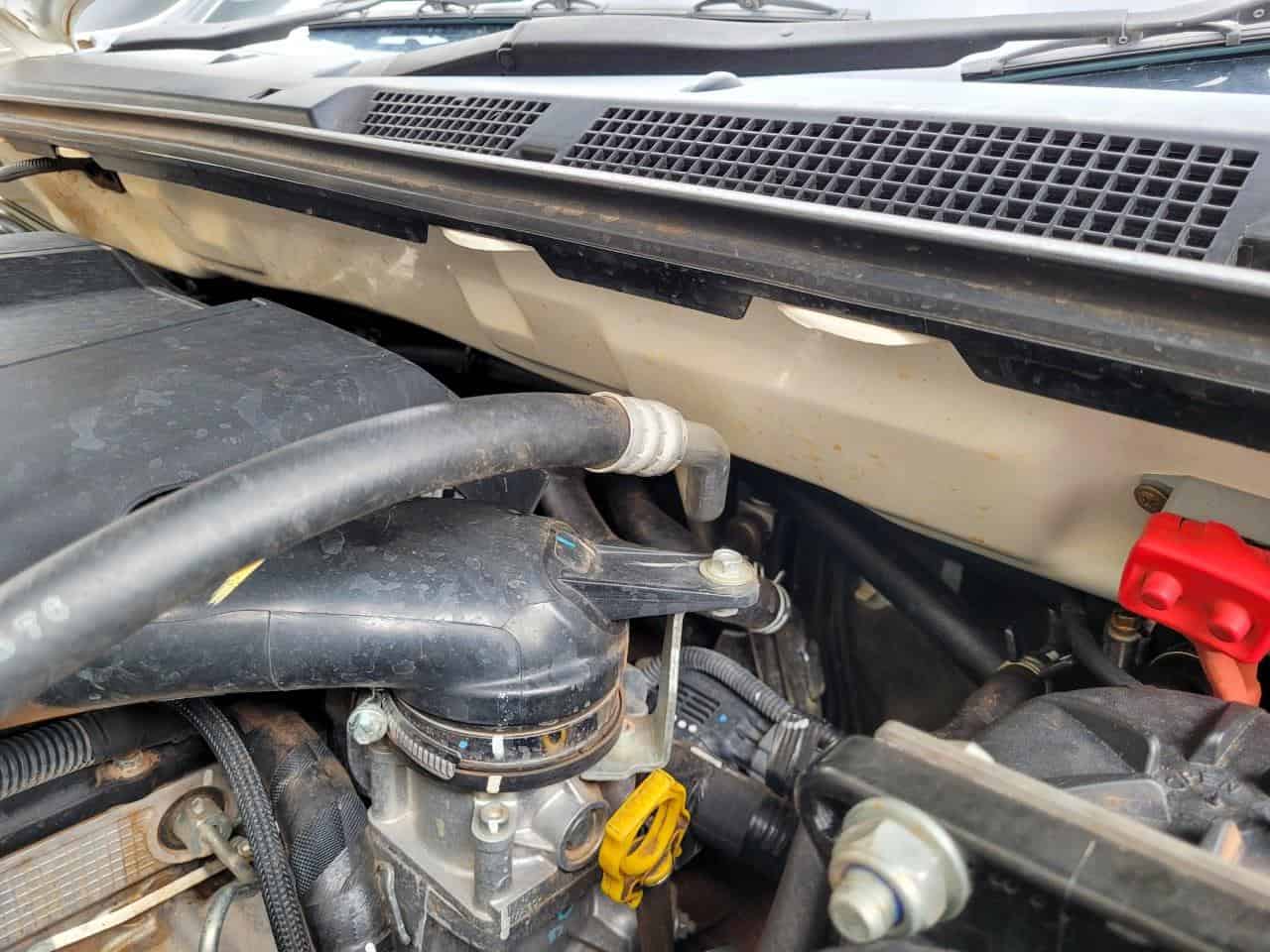 Fortunately the Dmax was still covered

If you have a Dmax or MUX and are worried about your evaporator cracking for the first time, or again, there’s a few things you can do to prevent issues.

The first thing that you should know is if you don’t use your vehicle off road extensively the chances of failure are hugely reduced.

From there, the new evaporators fitted (when they fail) are apparently a different design and your chances of it failing are also reduced (apparently).

However, if you want to do something more substantial, you can fit a P clamp to the firewall to reduce the movement. You can buy kits to do this, or just use a P clamp, but it needs to be done in a way that does not move the pipe at all. If you lean on it, or knock it, or push it the wrong way you can break the evaporator without doing anything further.

I would suggest you take a look at a new model Dmax or BT50 (or some of the Colorado’s) to see how its done on them. We might go down this path; I haven’t decided just yet!

Have you had issues with your Isuzu Dmax or MUX air conditioner evaporator? When did it fail, and was it covered by warranty? 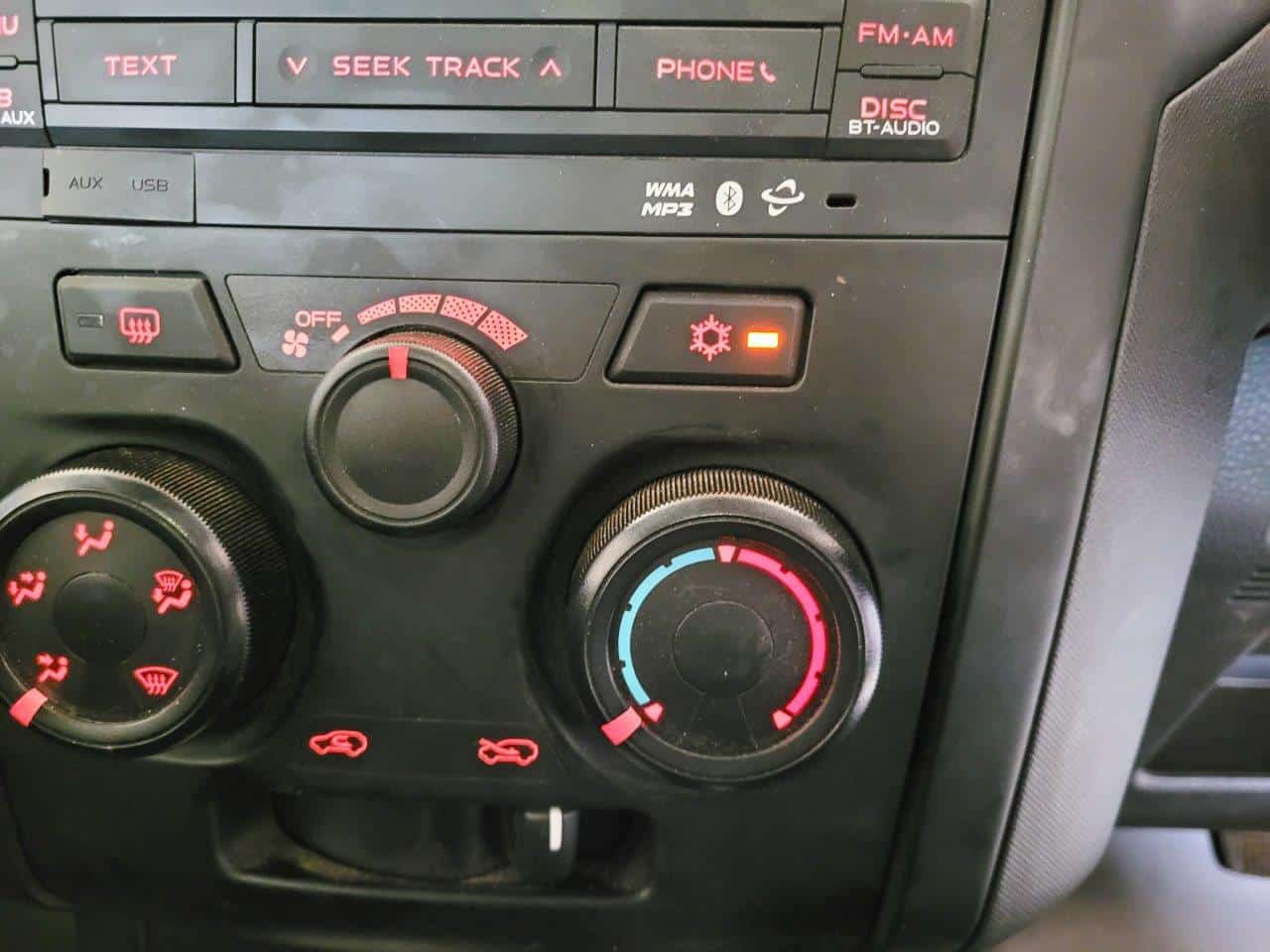 We have working aircon again!