Under Tray Water Tanks; everything you need to know

One of the best modifications you can do to your 4WD is to install running water. Even if you tow a trailer that has plenty of water storage, having an independent water source on your 4WD is invaluable, and one of the best ways to do it is to use an under tray water tank. 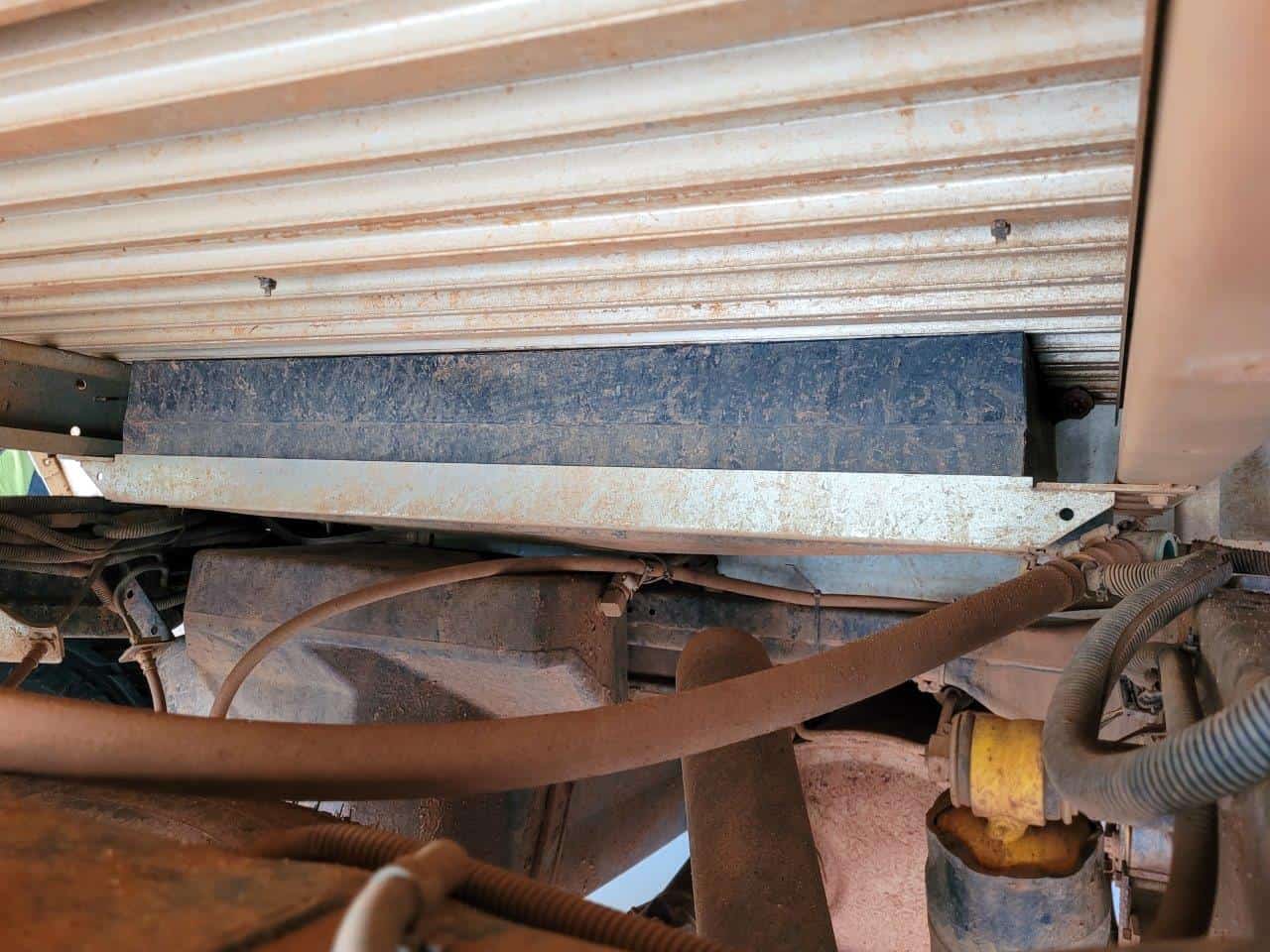 Our under tray water tank on the Dmax

Why an under tray water tank?

There really is no better location for a water tank than underneath your tray. Its dead space, its low to the ground and you can generally put the weight over the top of your rear axles, or even further forward which is hugely important when it comes to good weight distribution.

On a Ute the other locations for a water tank are higher up, or past the rear axles, which causes worse handling and weight distribution. 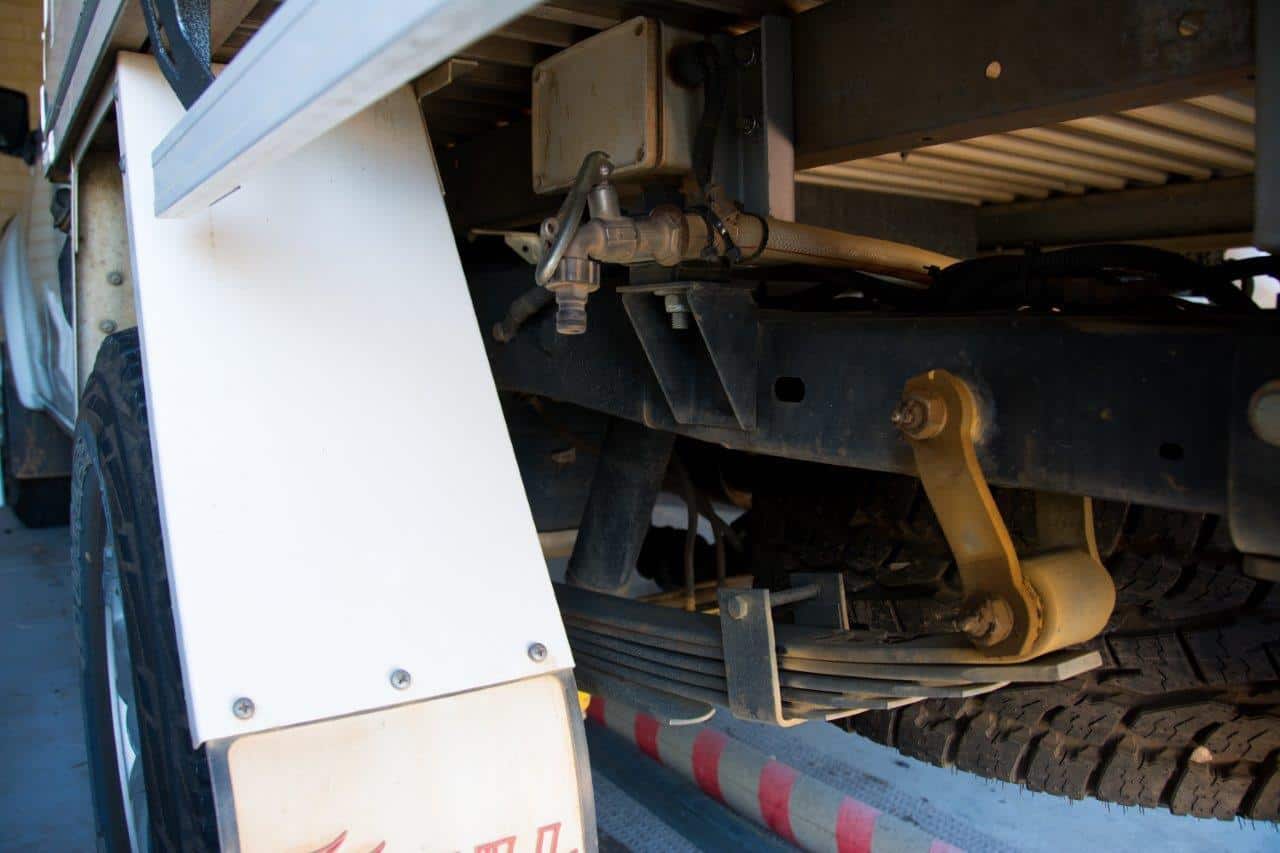 What size under tray water tank?

The exact size and shape of your water tank can be very much dependent on what tray you have, and how much room is left. 50L is a pretty good size, with even 30L still being decent, and anything bigger than this a bonus (but also not normally necessary).

We have a 50L tank in the Dmax, and its perfect for topping up water bottles washing feet off and cleaning the kids up after a swim at the beach. I’ve never really wished it was larger, but then our camper trailer holds a heap of water too.

How do you mount them?

Water is heavy, and even though the tanks are quite light you need a mounting system that is strong enough to handle the weight of the water and tank getting thrown around all over the place. It also needs to spread the load out evenly enough that the tank isn’t going to crack or get damaged in the process. The most common way to mount these is to use 50mm straps, which hold the tank in place.

Our Bull Motor Bodies Canopy came with angle iron mounts that the tank sits in, and wedges against the tray at the top. This is even better, and if possible should be considered. Over engineering these things tends to be a good idea, or you can end up in tears in the middle of no where. 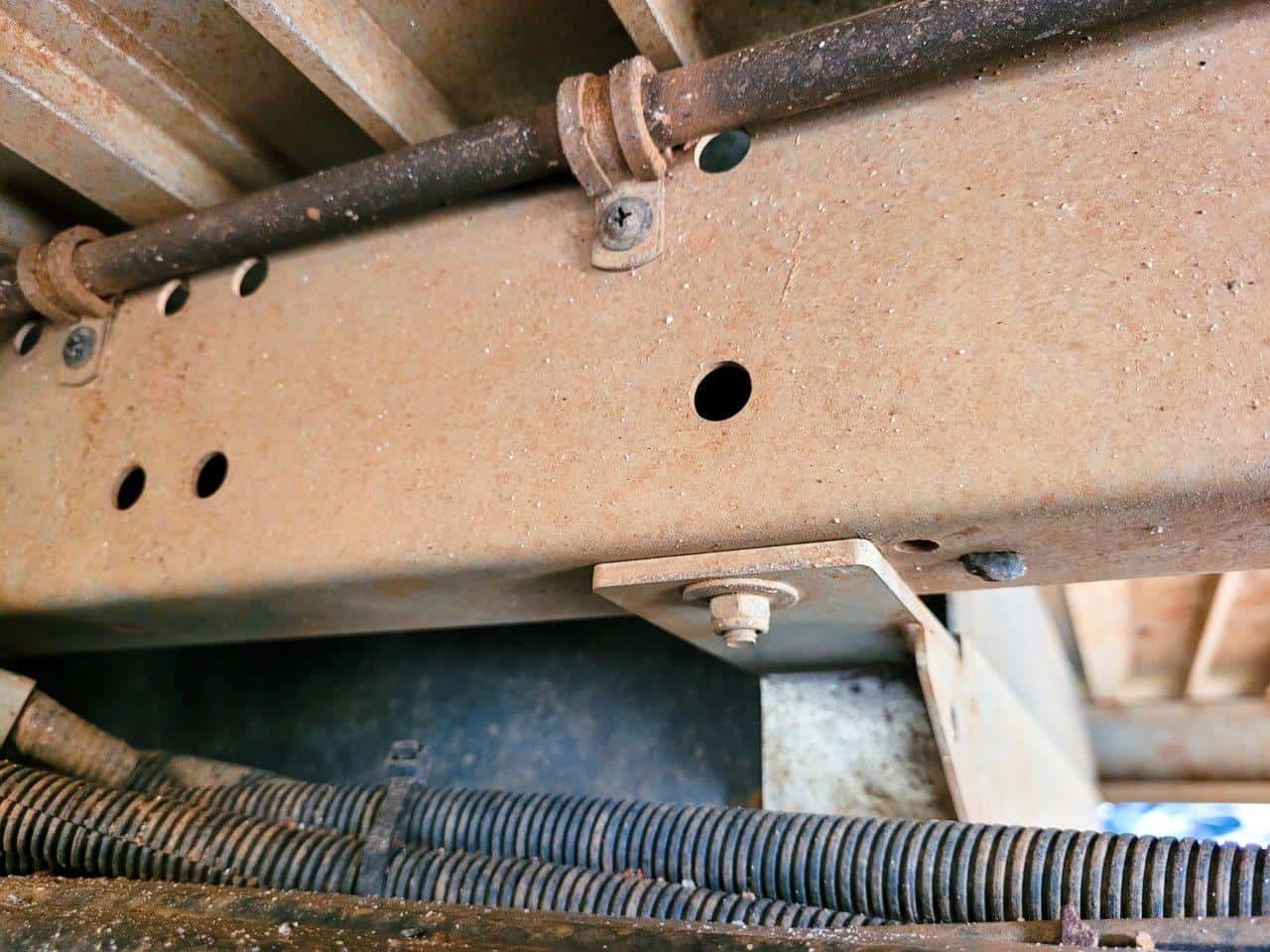 Our water tank mounts which are really strong

When it comes to getting the water out of your tank, you generally have a couple of options. A lot of people put a 12V water pump in place which gives you pressure. This is important if you want to run the water out through a hose, or to a shower.

If however, you mainly want it just to get water out, you can let it gravity feed. On our Dmax, we have a 12V water pump that is wired and plumbed up, and it only ever gets used for transferring water from the car to the camper trailer, or if we want to wash something.

To use it, we just flick a couple of ball valves around, but for 99% of its life, they’ve stayed closed and we just use the gravity feed. You can’t go wrong, and its so much more simple.

Every time the tank runs low the pump seems to run out of prime, which is a pain to get sorted again, so we just don’t bother with it! 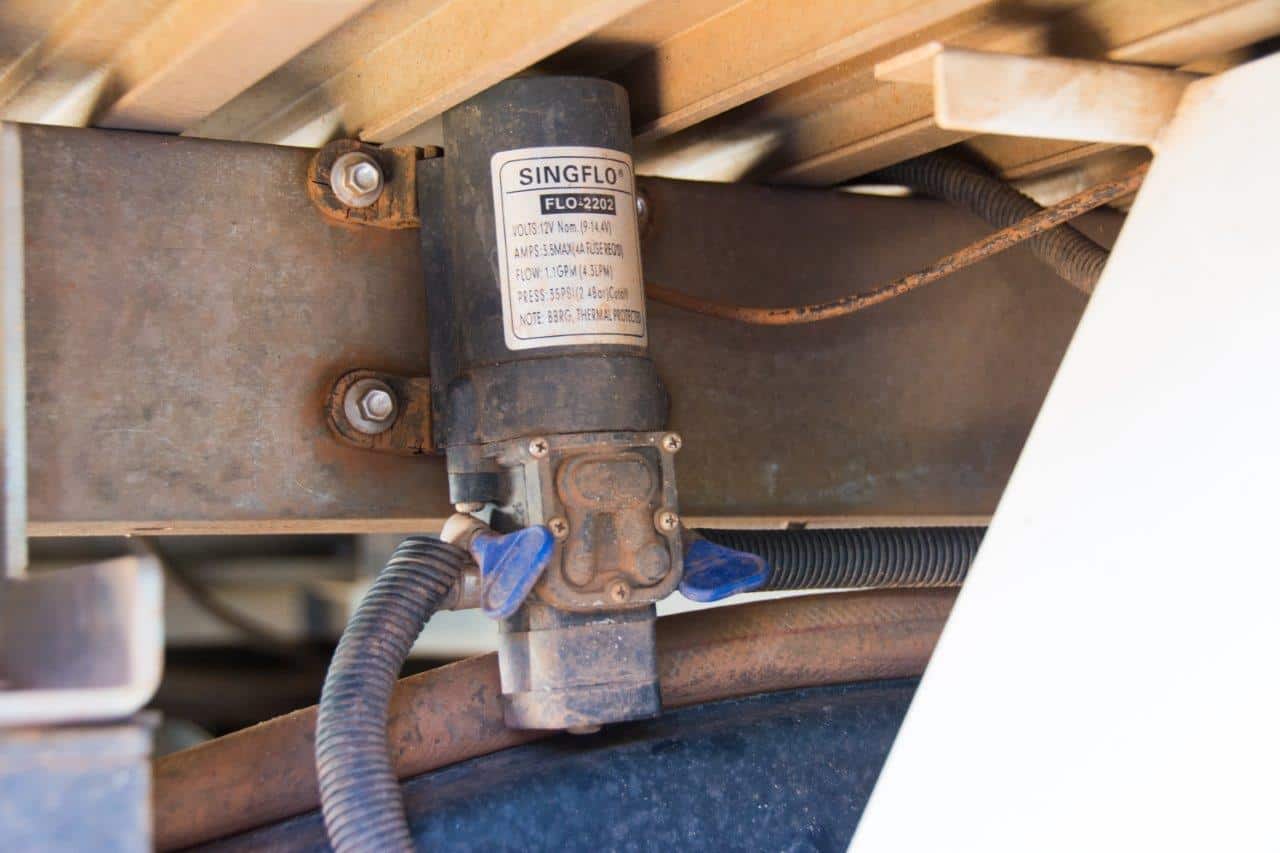 The 12V water pump on our Dmax, which can also be gravity fed as required

There’s nothing more important on your water tank than a good breather. Get it wrong and you’ll end up with a tank that is insanely hard to fill, and that wont empty out properly. I’ve literally seen setups where people could only use half of their water supply, as it gets an air lock and won’t release any more water.

The most simple setup is literally a sprinkler head, which allows the air to vent, is adjustable) and works very well. There are other options out there, but providing the breather is higher than the tank, you don’t fill faster than the breather will allow air out and you are generally careful with it you’ll have no issues.

Our Dmax  has this setup, and although it does leak if you are on a bad angle, or when you go around a corner and its full (due to the water level being closer to the breather) its been pretty good. The amount spilled is negligible, and could have been reduced if they ran the breather up higher with the sprinkler on the end.

To fill the tank, we just metre the flow in using the tap on the tank, and when the breather starts to cough and splutter water we know its full.

You can get waters tanks with designated fill points, and they often work fine. We just fill ours through the same tap that the water comes out, and have never had a problem with it. We know its full when the breather starts to hiss and bubble, and water comes out of it. I am careful to turn the hose off quickly when this happens, or you’ll end up with a busted tank as the water/air can’t escape fast enough. 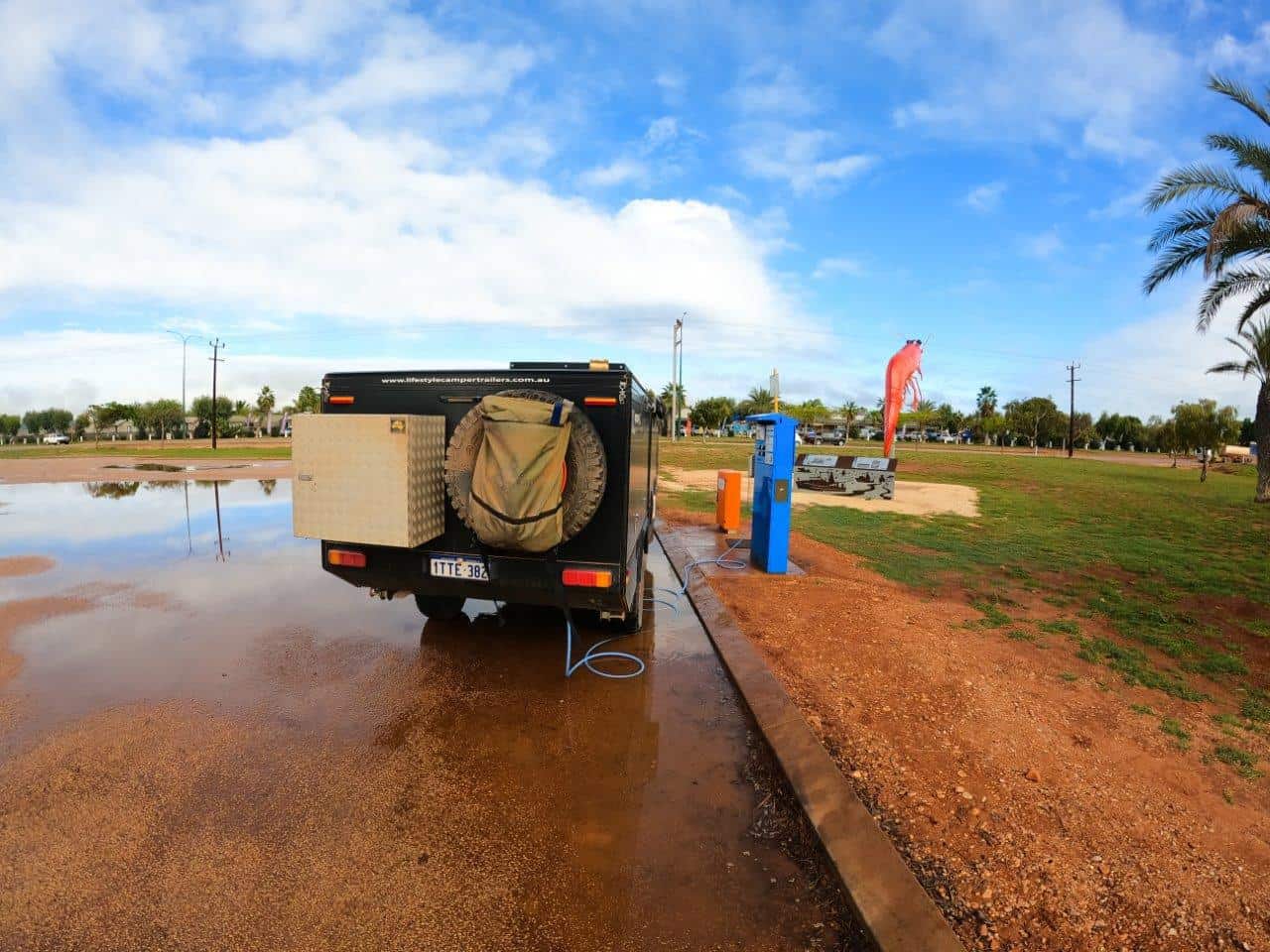 Filling the water tank up is easy, and its on the same side as our Campers tanks

Underbody water tanks are generally made in 3 different materials. Aluminium, stainless steel and then plastic. Out of the 3, a heavy duty plastic option runs rings around anything metal, and this is exactly why so many tanks (including long range tanks) are moving towards plastic.

Yes, there are some pretty average plastic tanks out there with thin walls that eventually crack, but if you get a proper poly tank that uses thick, quality plastic they are virtually indestructible. They don’t crack, they don’t have welds to let go and they will take a fair old whack, or a lot of gravel rash without any issues.

Both aluminium and stainless tanks have a terrible habit of cracking, especially after corrugations, and whilst you might be able to knock some fancy shapes up to maximise space, I’d never get one if I could avoid it.

I’ve seen a heap of them crack, and a water tank with a hole in it isn’t much use at all. 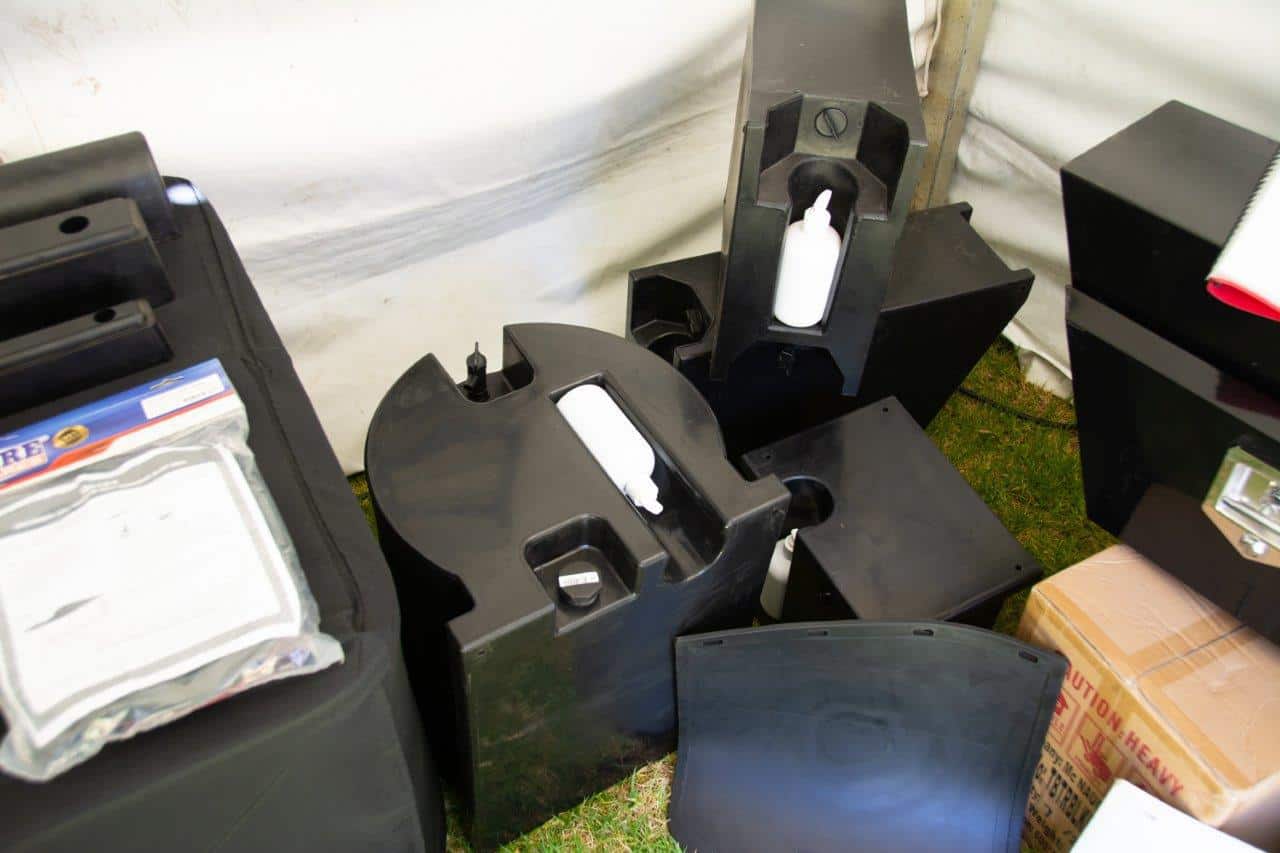 Who sells Under tray water tanks?

You can buy under tray water tanks from a couple of different locations including Rotoplas, Dunn and Watson, Uneek 4×4, TL engineering, 4×4 down under, Outback Equipment and Tank Master. There’s a heap of different shapes, inlet/outlet options and ways you can mount them.

Look for something with a decent wall thickness, and nothing light weight and flimsy or you’ll end up replacing it after a couple of trips when it cracks, or starts to leak.

You can actually also get diesel and water tanks that are combined (but obviously separate the fluid), which isn’t a bad idea if you are limited for space.

Another reasonable location for water storage is in the headboard. I’ve seen this done with a recessed slim line water tank installed, or some fabricators are even making the headboard a tank. This can be done for diesel or water, and is another good use of dead space. It is higher up, but at least its as far forward as you are going to get.

You can get a heap of different water bladders today that are actually really well made, and can be used in a number of locations. I’ve seen people put them under false floors, or just have them laying behind the driver and passenger seat, along the floor. Water bladders have the advantage of being able to get rolled up when you are done with them, and pack them away with minimal space taken up.

They are of course, more susceptible to a puncture, and can be hard to move around, but they certainly serve a purpose. 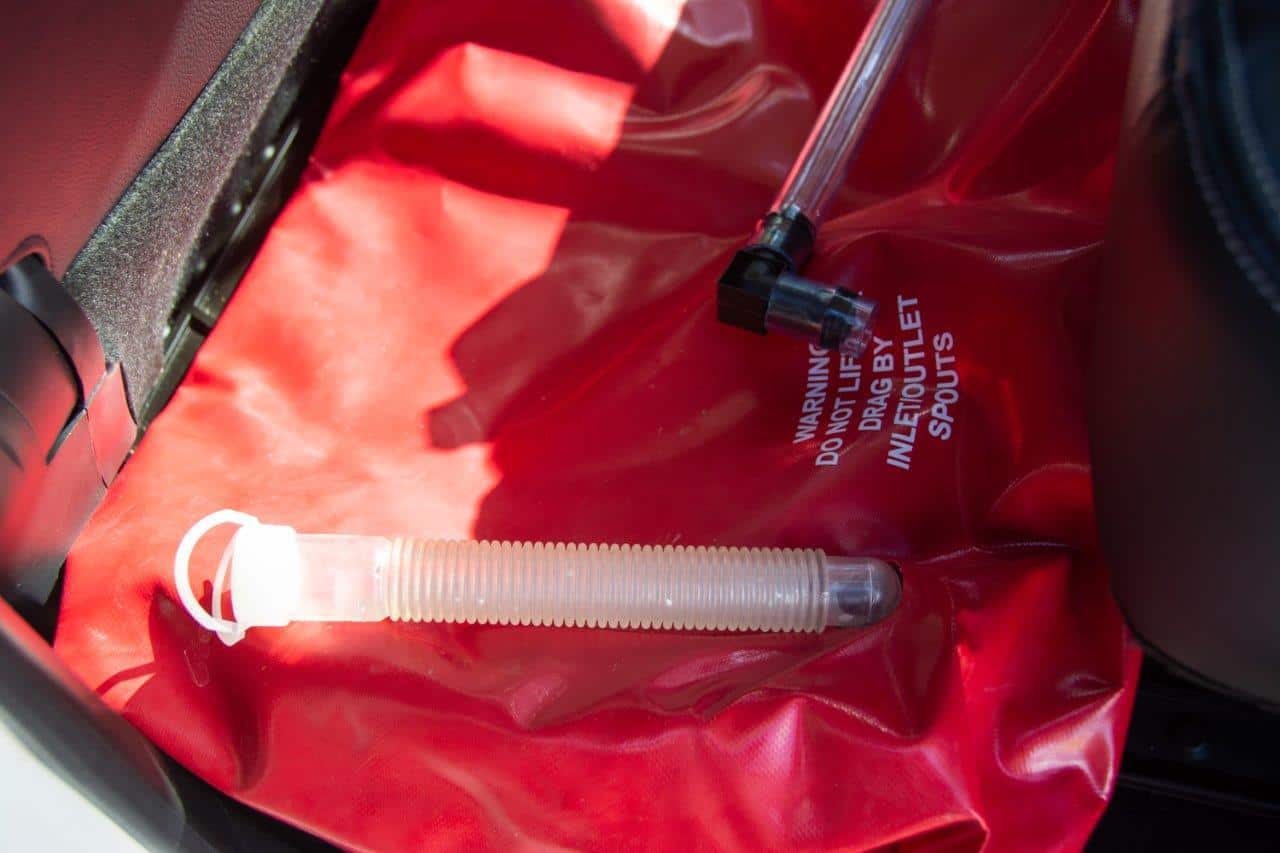 The humble Jerry Can is still a great option, and you can actually plumb them up permanently so you can fill them and use them without having to remove the jerry cans. Asides from having them permanently set up, they are great for ease of removal when you don’t need the extra storage. 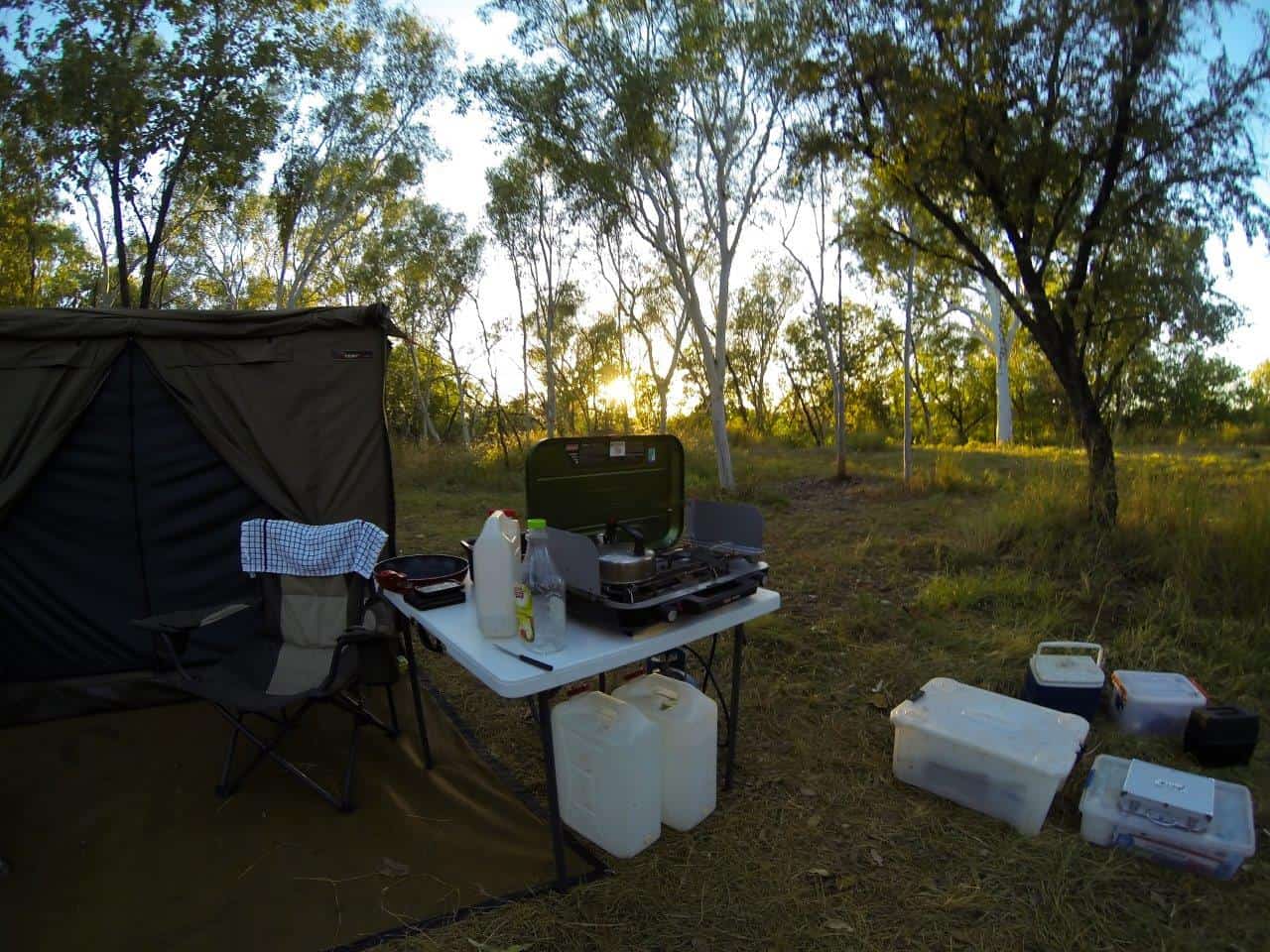 The humble jerry can works just fine, but isn’t as convenient as an under tray water tank

You can build yourself a PVC water tank quite easily using plumbing PVC. It’s not supposed to be potable, and you can end up having to make a number of sections to hold a decent amount of water, but its certainly a cheap way to get some extra water storage for washing and general cleaning.

If you are going to mount it on the roof rack, make sure its secured well and doesn’t put you over your rood loading capacity, or things will go bad very quickly. 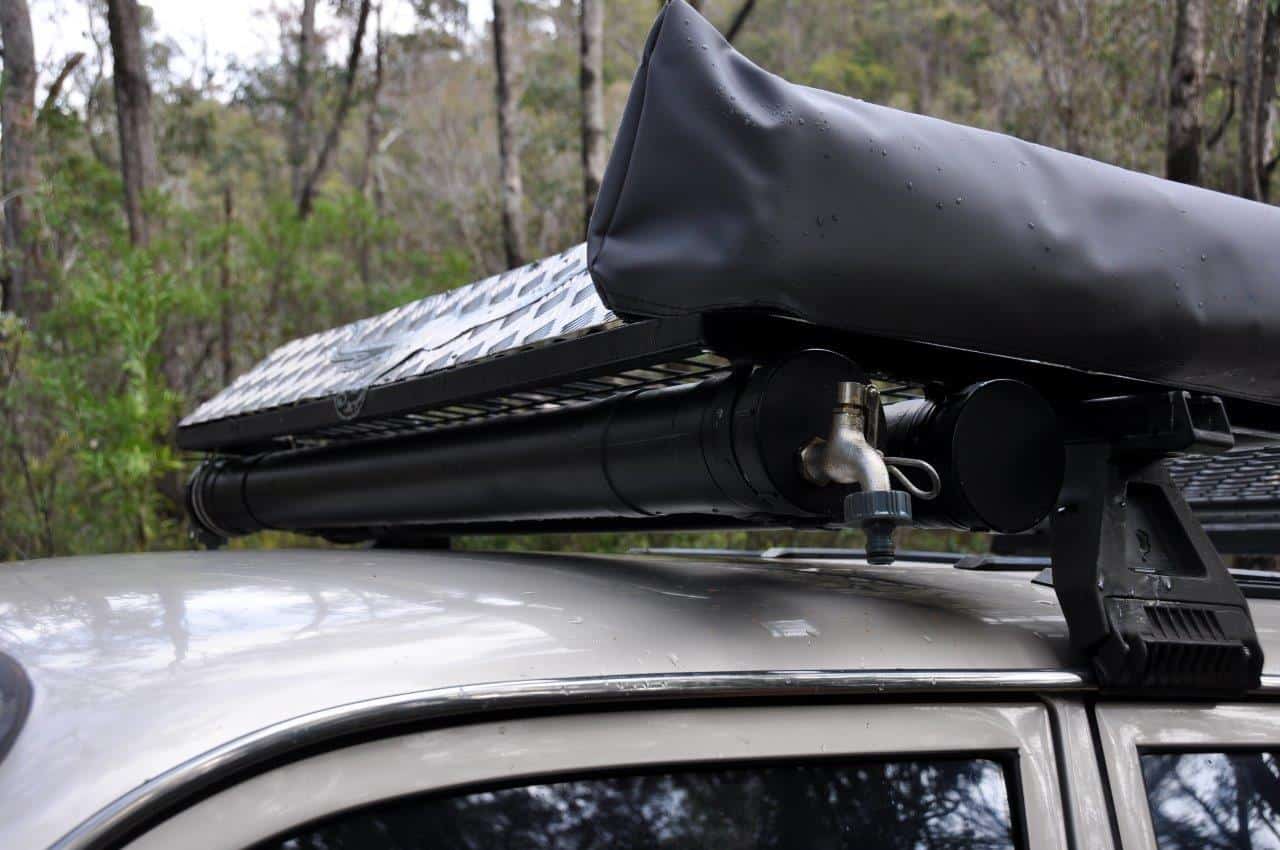 A PVC water tank mounted to the roof racks

Under tray water tanks are great

We’re very happy with our under tray water tank. It gets used a lot, is in a great location and is easy enough to use. If you are considering getting one, they’re well worth it!