We had all but decided to stick around Perth for the long weekend, but a last minute itch to get out there got the better of us. We’d been meaning to check out Wellington dam for a while now, so decided to make it the center point of the trip.

It was too hard to get away on Friday night, so instead took the easy option and threw the gear into the 80, heading off early on Saturday morning, with no real idea of where we were going to camp. 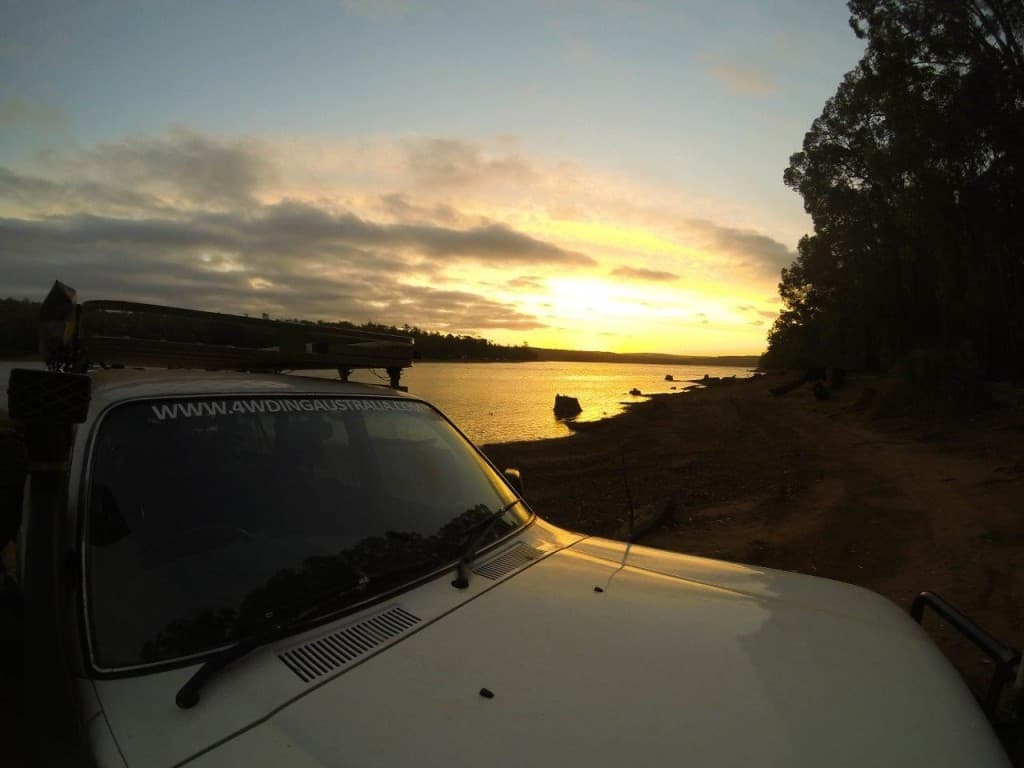 That’s pretty unlike us; we’ve normally got a good plan of where we are going and what we are doing, but being a long weekend we knew we would have to be creative in finding a camp site!

After filling up at Myalup we called into Wellington dam, hoping that on the off chance there might be a tiny spot left. We were dreaming; Potters gorge was absolutely packed, and I’m not sure I’d have wanted to camp with so many people anyway. We headed onto Collie, where we had a good feed (both of us forgot to eat breakfast at home!) and headed out east. I’d heard of some good camp sites along the Collie River, and within 15 minutes things were looking good.

On the way there, we came across a wedge tail eagle which had just landed on the road, and took off as we approached. We could clearly see a big lizard in its talons; it must have just grabbed it off the road! We saw a number of Wedge tailed eagles in the area too; pretty amazing birds.

We drove around, up and down both sides of the river for about 20 minutes, and settled on a spectacular camp site just near a river crossing, and proceeded to set up camp. The tent was literally 2 meters away from the river, with a nice entrance into the river for a swim and plenty of room to set up. 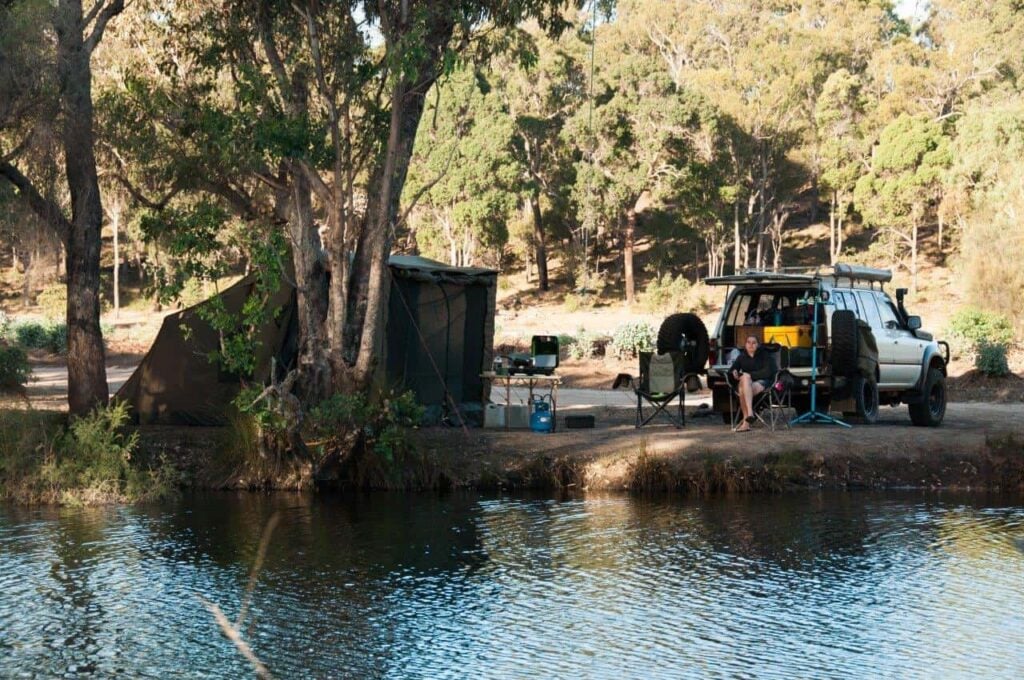 Our camp site east of Collie 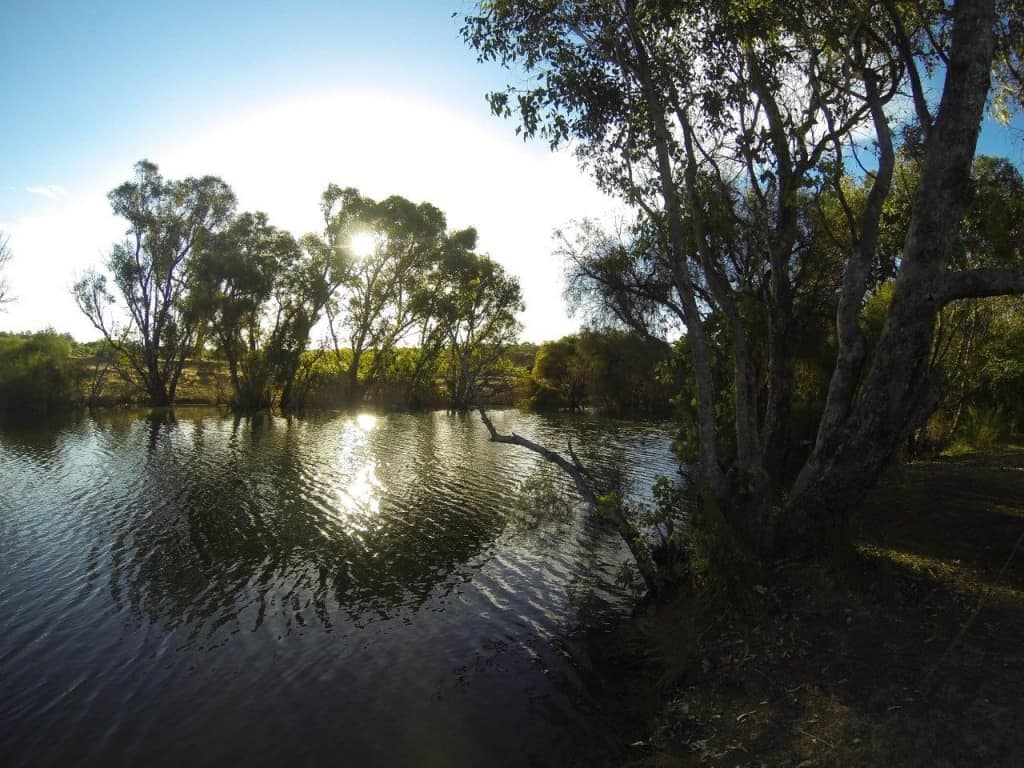 You’d hardly complain about it, especially on a long weekend 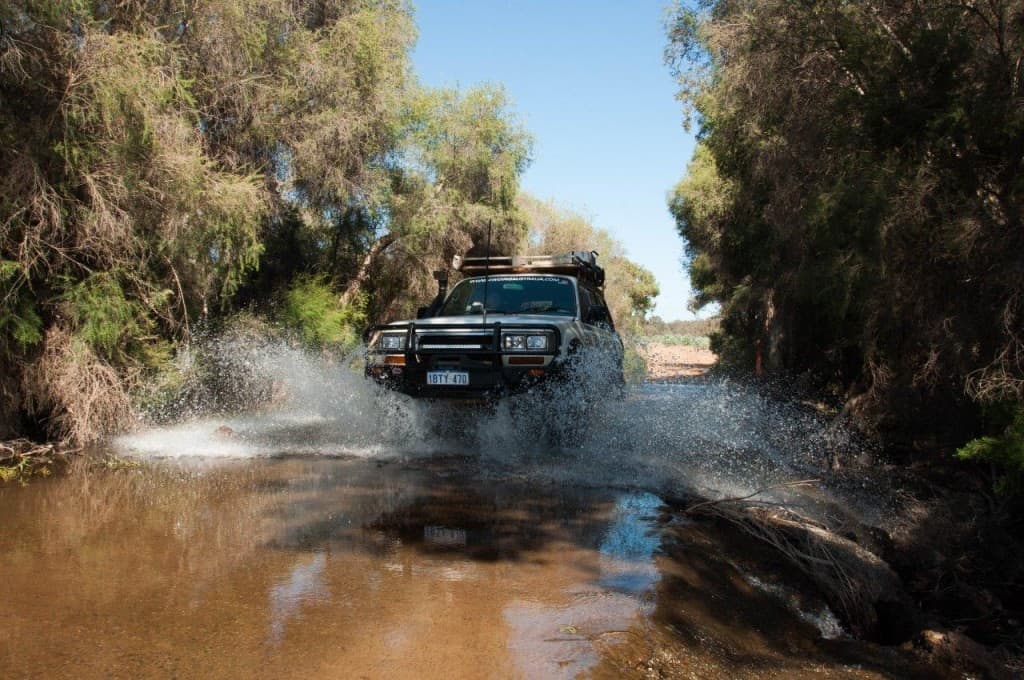 The very empty water crossing nearby

Seeing as we’d arrived so early, I figured we’d give the solar shower another go, and quickly filled it up with water from the river (which was very clean!). I set it on the hot dirt, black side up and left it to do its thing. After a very relaxing afternoon, we checked the water temperature, and were quite surprised! The only other time we’d used the solar shower bags was down at Esperance, where the temperature in the middle of the day just wasn’t enough to really get it warm.

On this day though, the water was pretty well as hot as you’d want it from your shower at home. A warm shower, a quick walk around the area and a hot drink and we were happy campers!

We made plans to pack up the following day, and head to Wellington dam. I was pretty confident we would find somewhere to camp! We packed up, and headed back into Collie, where we borrowed the McDonalds free WIFI to update some maps. A short drive later and we were on the south east side of Wellington dam, looking for somewhere to stay.

We went passed a stack of campsites, some which were very lovely (and taken) and plenty that were nice, but not what I was hoping for. We went down one particular track which was seriously steep, with a heap of sharp turns. The further down we went the worse it got, and looking at the GPS I could clearly see we had a long way to go, so made the call to turn around.

However, I knew getting back up wasn’t going to be very easy, with some big holes and offset cambers that I was really not a fan of. After a good look, I let the tyres down further and asked Sarah to spot whilst I drove up two particularly nasty spots.

The ELockers, along with the right tyre pressures and pretty much brand new BFG KM2’s gave me the confidence needed, despite the fact that we were on our own, with no winch!

There are plenty of 4WD tracks in the area! Eventually, we came across the perfect campsite; a huge section of the dam that was 4WD accessible only, free of other campers, flat and nice looking for swimming. Once again, the Oztent and camping gear were unloaded and set up, this time with a cracker view of Wellington dam.

We enjoyed watching the cockatoo’s which live around Wellington Dam; very interesting birds! 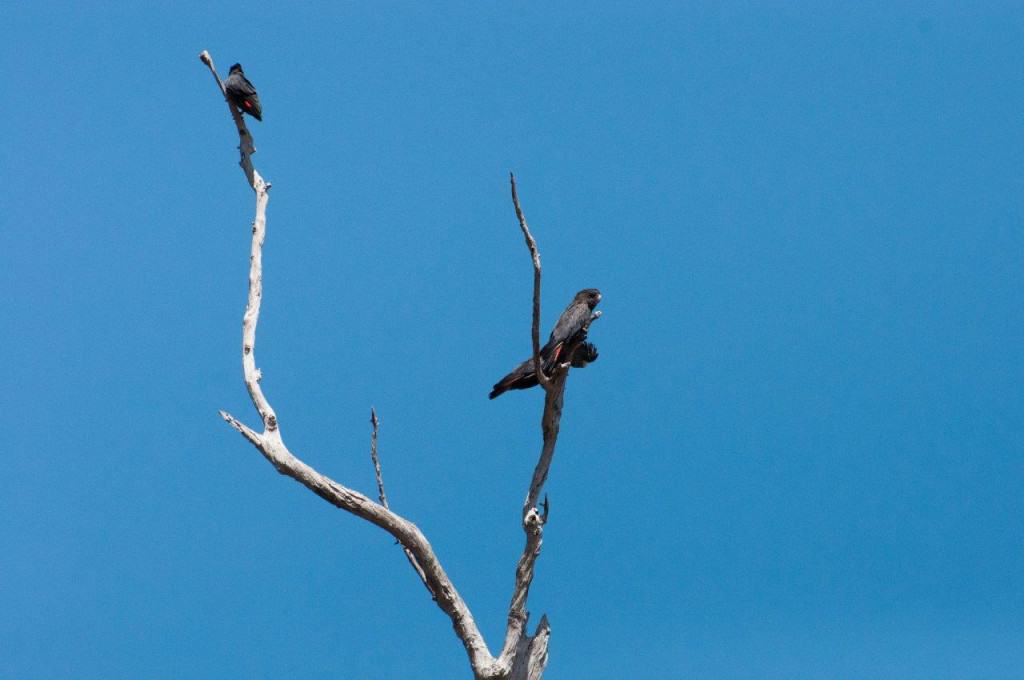 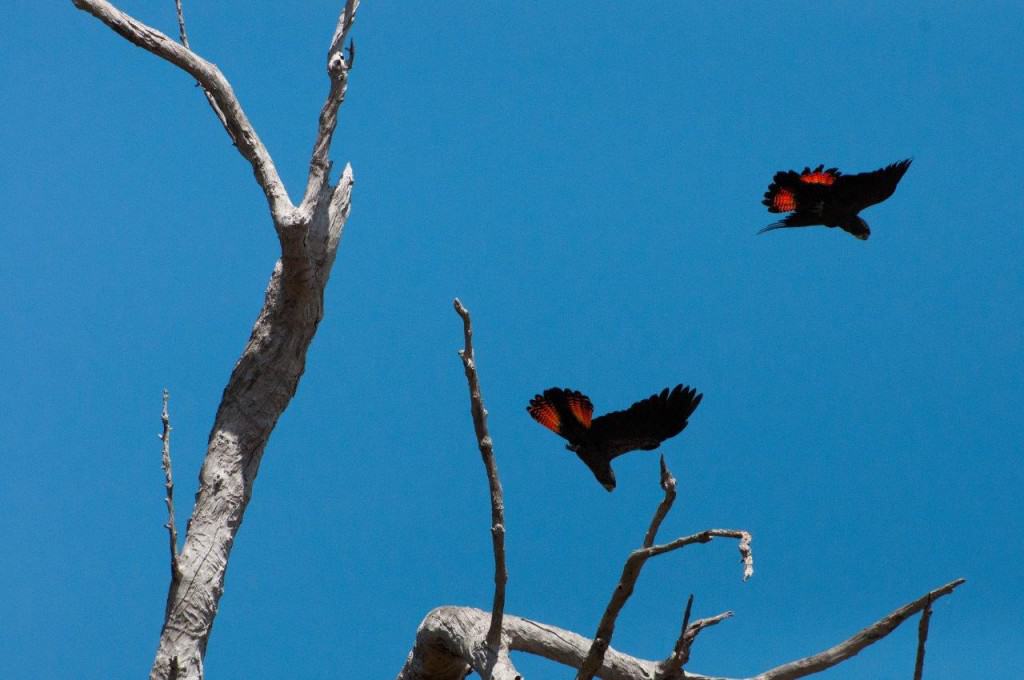 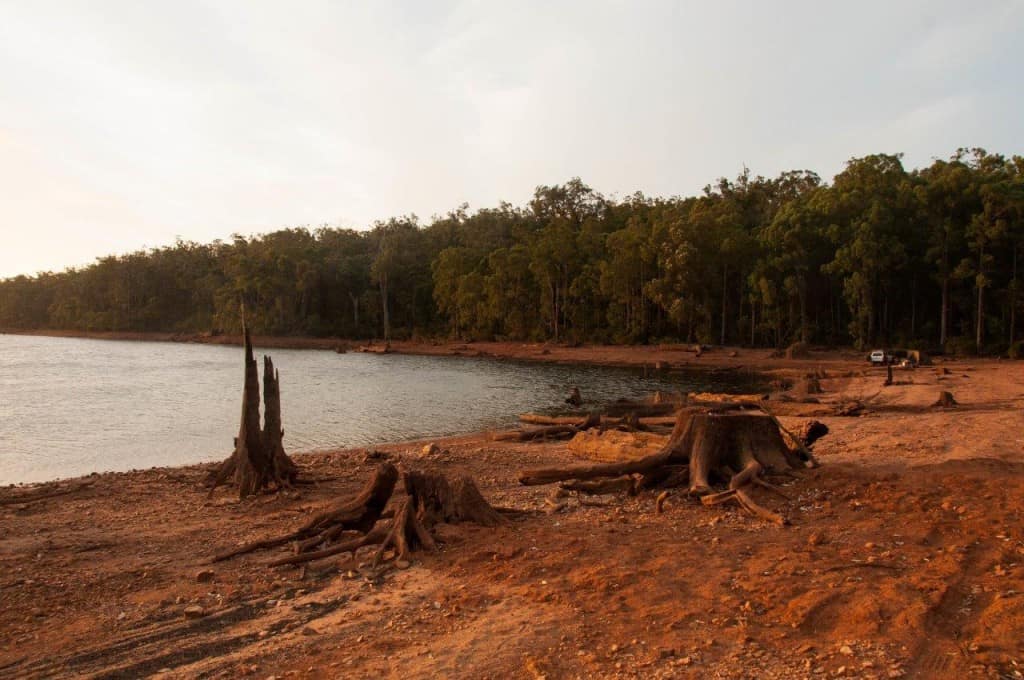 Our private site at Wellington Dam 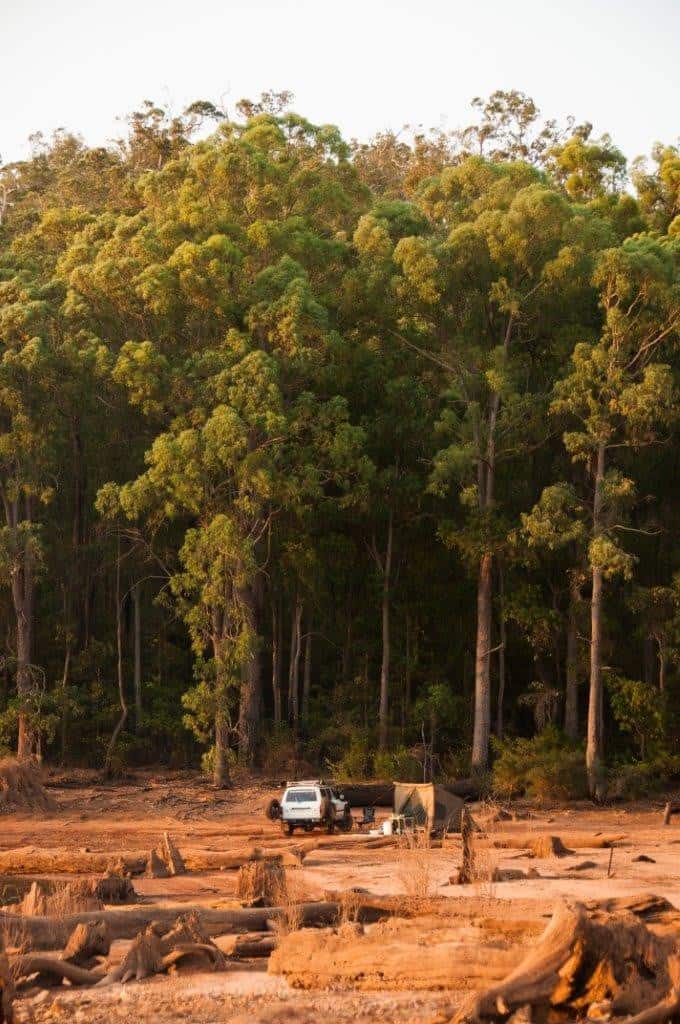 Meters from Wellington Dam too

We lazed around for the rest of the afternoon, trying to work out which way the wind would come from the worst. Despite the weather report, the wind was pretty well coming from anywhere within a 180 degree radius. I parked the car as best as possible to block the wind, and had a relatively peaceful night.

Having had a very relaxing weekend so far, we got up just after 7:30 the next morning, and after breakfast packed up camp. We took a few photos before heading off, and made the climb back out onto the main road. We called in at the King Jarrah tree on the way out, which is massive and worth the quick stop. 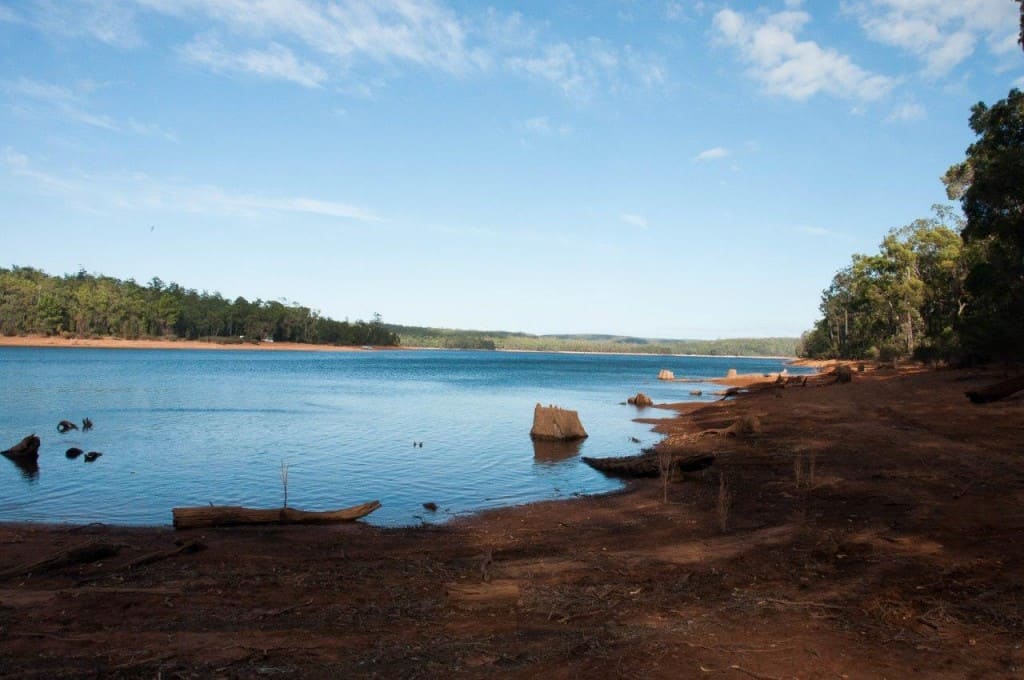 Not a bad view to wake up to! 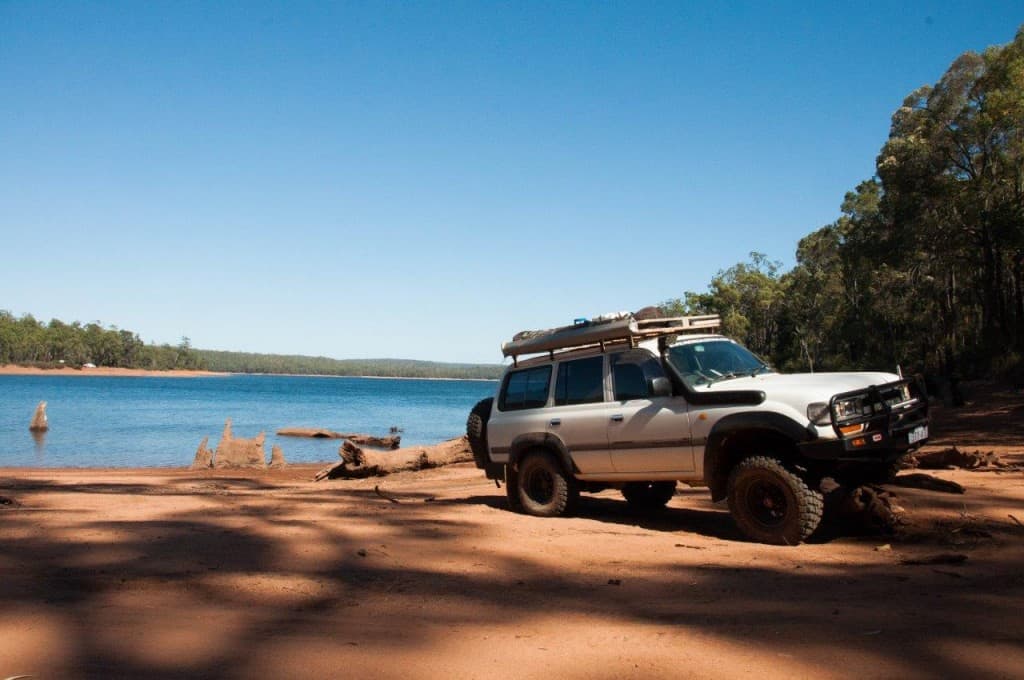 A quick flex shot on the way out 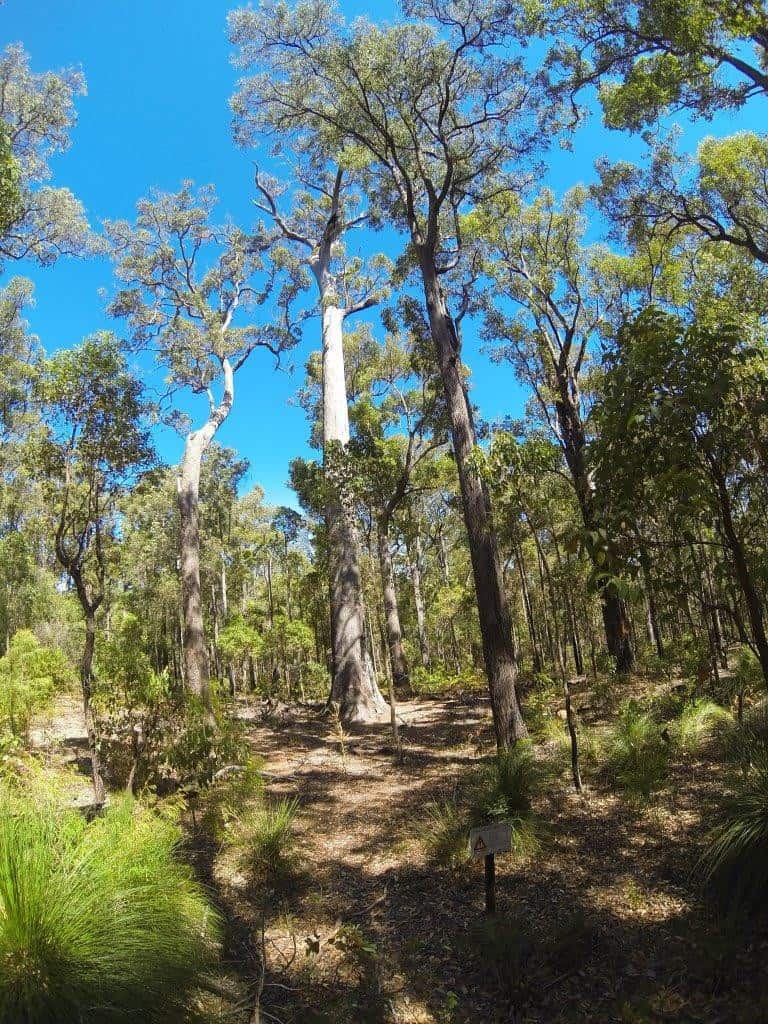 A short drive later and we arrived at Gnomesville, a funny little place on the corner of two main roads, which has become a place for people to put their garden gnomes, all over the place. We had a quick walk, and plenty of laughs at the different setups, then headed down the road to air up. 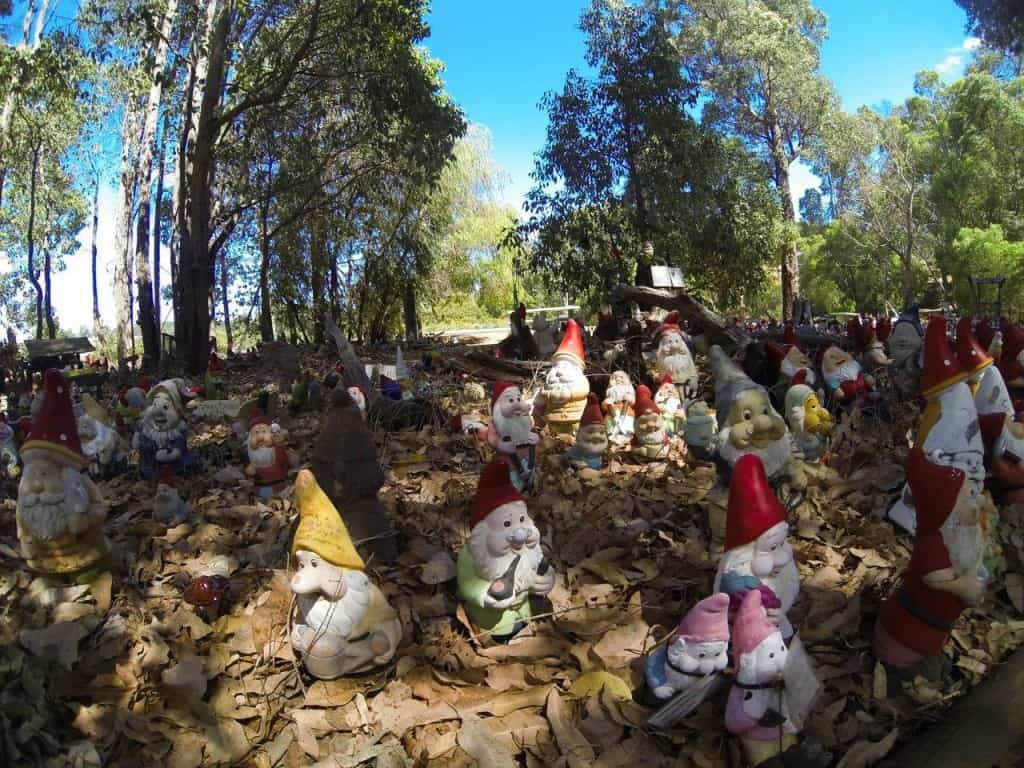 More gnomes than we’d ever seen before!

We called through Donnybrook and picked up some fresh fruit, whilst the pies cooked in our 12V oven. We were back in Perth and unpacked by 3PM, which gives me time to finish this post!

It was a fantastic weekend, and the Collie area is one I’d highly recommend. Don’t be afraid of not finding a camp site – be creative and you will find plenty around, even in peak periods.