After getting our Renogy Rover 60 solar controller wired up to 600W of solar panels on the roof, I noticed very quickly that the lithium batteries were spending a lot of time at 14.4V, which I thought was a bit strange, being higher than a lithium battery would normally float at. I’m used to seeing the voltage go high, then back off and sit at a lower level until they are drawn off a bit, and then start charging again.

Looking into it a bit further, I clarified that the Rover 60 MPPT solar controller was set to a lithium battery profile, and that it had a number of settings that you could access. However, some of these are locked, and what would you know, but the float voltage is locked at 14.4V. Hmm, that can’t be right?

The factory lithium profile settings in the Renogy Rover 60 Controller, viewed through the DC Home app

Lithium batteries are pretty amazing bits of equipment, but to get maximum life out of them, they need to be charged with the right profile, and left in a suitable state. Keeping them full all the time (or even a lot of the time) is not a good idea, and 14.4V is almost as full as you can get. If they are left full and not charging you don’t have an issue, but sitting at 14.4V with charge on was a guaranteed way to reduce the lithium battery lifespan, according to a heap of different places online.

I wasn’t overly happy about this, as our batteries on the road in good, sunny conditions get full around mid day, which means they spend a number of hours sitting at 14.4V, and this would ultimately lead to a shorter lifespan. It won’t kill them, and isn’t an immediate, or major problem, but its not the right float voltage.

I looked online and found a number of discussions that were similar in nature, with Renogy saying that 14.4V was the correct voltage, or that its been removed from their recommendations altogether, and thought I’d flick them an email to find out more.

Whilst this is partially correct, the BMS doesn’t regulate the charge, and doesn’t really care about the long term lifespan of the battery. It’s there to protect the cells from charging or discharging too quickly, or hitting voltages that it shouldn’t get to which cause damage, not for stopping the battery sitting at full all day long; that’s what your solar regulator is supposed to do.

Dissatisfied with their answer, I proceeded to continue looking into options on my own.

Can you adjust the settings?

I spent a long time looking at the various settings. On the DC Home app, which is the latest Renogy Bluetooth app you can see your systems, but you can’t make changes to the Rover 60 setup via the app.

On our Isuzu Dmax, we have a 50 amp DCDC from Renogy which you can also see on the app, and you can change the battery type, how much charge goes into the battery at maximum and a few other parameters, so why can’t you do it on the Rover 60?

For me, what was most annoying is that I’ve installed the Rover 60 in a location that requires half of my storage to be removed to get to it, which I did, and attempted to drop the boost voltage down (which is one of the few parameters you can change), but that day I saw the battery hit 14.4V again, and stay there for a long time. It appeared that to make it float at a lower voltage, the lithium profile in the Rover 60 just wasn’t going to work.

My only option then, was to unpack everything and manually move it to the USER setting and set each parameter manually, or find a way of doing it via an app. 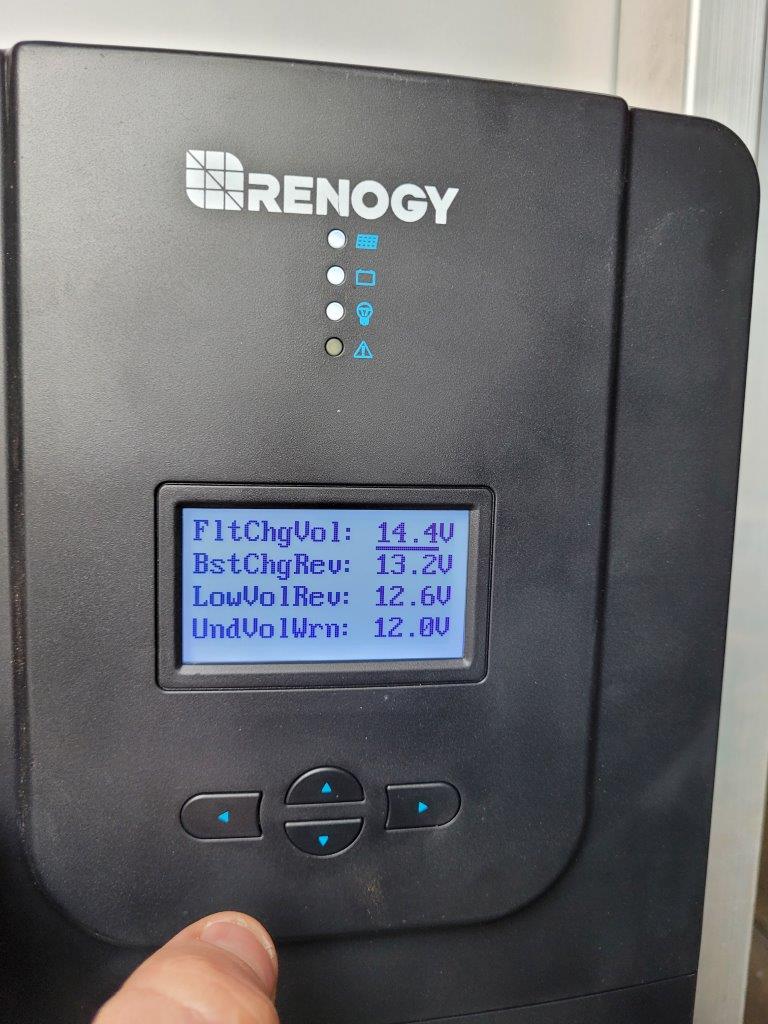 The float voltage is locked, and cannot be adjusted in the lithium profile

I then asked on the Renogy users Facebook group, and had a reply from a helpful bloke who said you can adjust the settings using the app. I spent ages trying to find how to do it, until I read that it can be done using the Renogy BT app, which is different to the one I’d been using.

Put simply, Renogy has two apps that you can use. Both will connect to your Bluetooth, and give you the information that you need, but only the Renogy BT app has the ability to change settings, if you enter a password as an admin. To be fair, the newer app (DC Home) is much easier to read and navigate, but not so good if you can’t adjust any settings with some of their units!

There’s two apps you can use, but only one can adjust settings (and has been discontinued!)

The Renogy BT app has been discontinued, and Renogy have moved onto their DC Home app, but you can still use both (just not at the same time). After downloading the BT app, I was able to connect, then hit the + sign and a password as an admin (135790123), and then change the battery profile to USER (custom setup) and you then have full ability to change all of the parameters.

Now on the USER setting, with custom parameters entered

Once you ‘set’ the new parameters, you can see them in the DC Home app

You can do this from the controller itself

Again, this could have been done from the controller, but you have to take it off the lithium battery setup, and move it to the USER function, and then set all of your parameters, which is a bit average. For me, I’d have to unpack everything which is a pain, and its nice to know I can do it from my phone if needed.

Realistically, you shouldn’t have to do this; if you set it to a lithium profile, it should use the most suitable settings for a lithium battery, and my understanding is that Renogy haven’t quite got this nailed.

We’ve gone against the information from Renogy

In general, I’m a stickler for doing things by the OEM recommendations, and don’t like to go against what they say. However, looking online running the battery at 14.4V for extended periods is not good for them, and there were some comments that made me question Renogy’s technical replies in terms of them being very generic, so I’m happy to run the batteries at some more mild settings in the hope that it will give a longer battery life.

I don’t understand why the settings are different; I never see our Dmax battery go over 14.2V, and yet they are two Renogy products; why do they have different settings, and in effect different lithium profiles?

The DCDC lithium profile settings are very different, from a 50 amp Renogy unit

Will this affect our warranty?

If we have any issues with our two 170aH Renogy Lithium Batteries, and have to send them in for a warranty claim, is this going to hurt our ability to claim from them? I hope not, but you never know. Either way, it seems like a sensible decision. 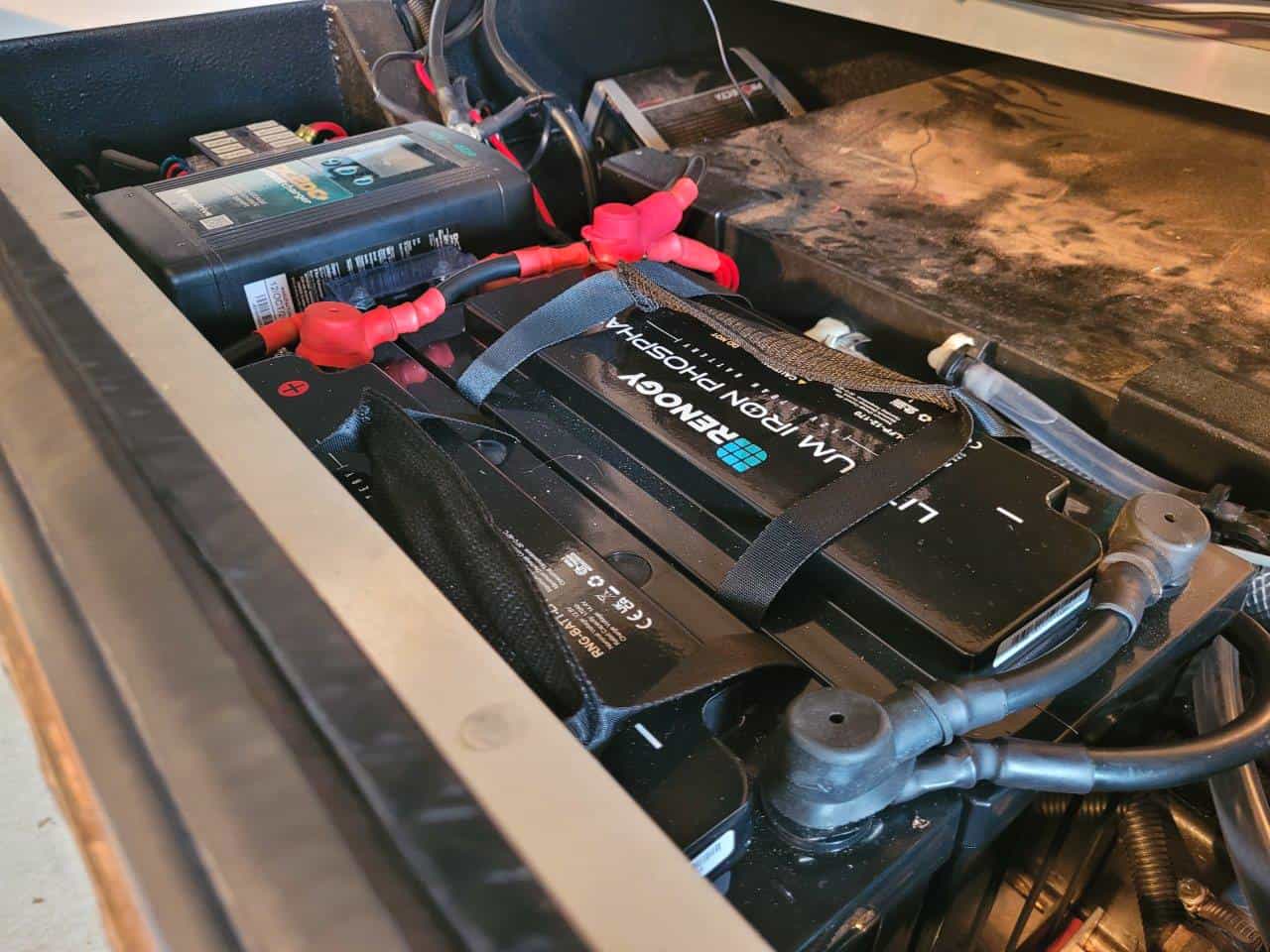 Hopefully we don’t have any dramas with warranty, if it arises

Is this a good move?

If you’ve got a Renogy charger, and want to know how to change the settings to something else, this should have made things clear. Do you agree with the Renogy settings, or have we done a good thing?

Are we happy with Renogy?

In the grand scheme of things, this is fairly minor, but it seems frustratingly daft of Renogy. We’ve got a heap of their gear, and have had no issues at all with it, and in fact are seriously impressed with it overall.

It’s getting extensively used full time on the road right now, with two 170ah Renogy Lithium Batteries, the Rover 60 MPPT regulator, 50 amp DCDC, two Bluetooth modules, a 2000W and 3000W inverter, 600W of solar and a 500A shunt, and this is really the first gripe (and its a minor one) that I’ve had with Renogy.

In fact, we’ve done a post on the Renogy Solar Panel Review which was also very positive.

Thankfully there seems to be a solution; I was just about ready to give up and leave it as Renogy had it set up. Will I regret it? Time will tell! What do you reckon? Hopefully if you’ve been struggling with this you’ll also be able to make your own adjustments!