Way up the top of the Northern Territory lies Kakadu National Park, a dual world heritage site that attracts visitors from all over the planet. It’s full of amazing history, nature and some of the most impressive waterfalls in Australia.

One of these is Jim Jim Falls. The drive in is fairly picturesque towards the end, and the walk nice too. Get near the end and you can hear the water running, and finally you’ll pull up almost entirely surrounded by giant rock walls, and water cascading down one side. Photos barely do this place justice; you really have to go there to experience it!

Litchfield National Park is beautiful and much more accessible, but like Jim Jim falls reflects so well, Kakadu is bigger and provides more awe. 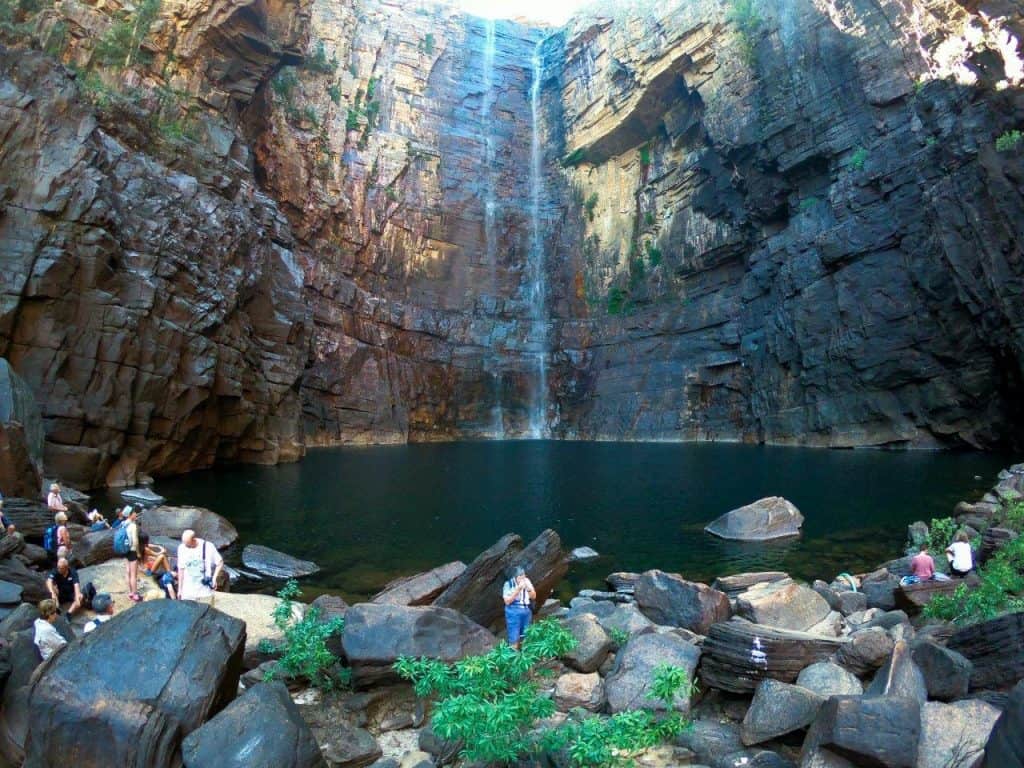 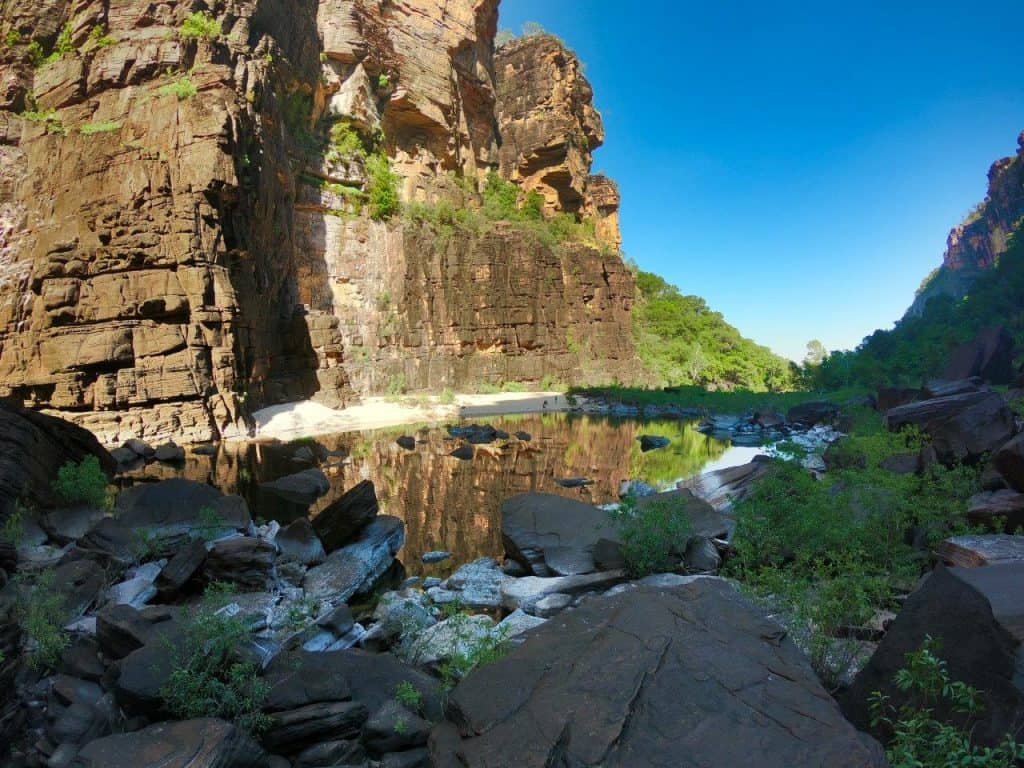 Where is Jim Jim Falls

You’ll find Jim Jim Falls in Kakadu National Park, 55km off the bitumen road running between Jabiru and Pine Creek, with the turn off about 10km north of Cooinda. We called in as part of our 3 month trip up north with a 4WD, camper trailer and toddler.

Getting to Jim Jim Falls

The drive in is pretty straight forward. Once turning off the bitumen, you have 50km of gravel road, that is kept in fairly good condition. The Kakadu map suggests this is to take 2 hours one way, which is very daft as the road is in good condition, is only 50km long and the speed limit is 60km/h.

A lot of people, and  tour busses included, were going well over that. If you are in 4WD, have decent tyres and let a bit of air out, there’s no reason why it would be unsafe. That said, even at 60 km an hour it will still take you less than an hour.

Once you’ve done the 50km of gravel, there’s a short, 5km section of ‘4WD track’. As long as you have a bit of clearance, you’d have no issues getting out there. Its only wide enough for one vehicle, and there are a LOT of places where vehicles can pull off the track to let an oncoming vehicle through. You will have to do this regularly for traffic coming to and fro the falls.

You’ll go through a few sections of water, none of which are very deep or muddy, and eventually arrive at the carpark for Jim Jim falls, which takes quite a number of vehicles.

Drive with your lights on, take it slowly especially around blind corners and watch out for the big humps in the road (there are lots of them). I assume these are man made to aid with run off, and perhaps limit your speed on the track! 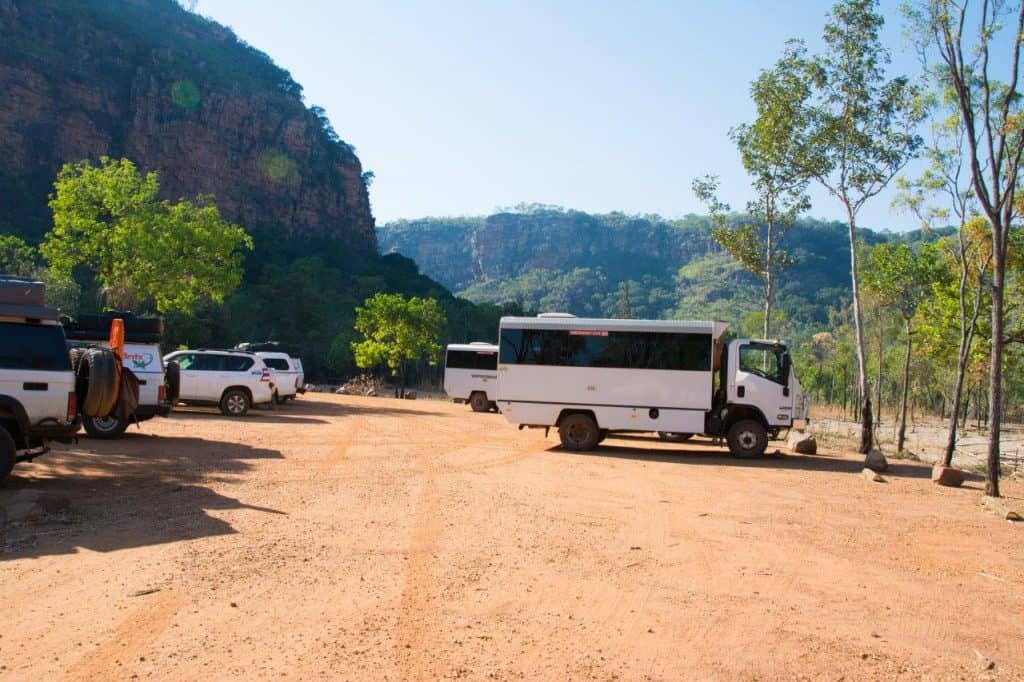 In the car park at Jim Jim Falls

Is there a toilet there?

There is a male and female toilet about 50 metres away from the car park at the falls, towards the start of your journey.

There are 3 walks at Jim Jim Falls. The first one takes you to the pool, which is fairly easy but still involves a fair bit of rock work. This is 800m return.

The second walk, which is the most popular, is 2km return and takes you to the base of the waterfall. This is recommended as a 3 hour return, and involves a lot of rocks, and mild climbs up and down. There are a number of sections where you’ll have to stretch the legs a fair bit to get up or down rocks that are 50 – 90cm tall, but we saw a heap of different people of all ages doing the walk.

At the end, you can choose to go right or left. Left takes you to the bottom of the falls (and where you can actually see them), and right takes you to a little ‘beach’ at the pool just after the main falls pool.

The last walk takes you to the top of the falls, and requires a lot of effort, energy and forward thinking. It’s 6km return, and recommended time is 4 – 6 hours. The track is not overly shady, and you need to take plenty of water and head off early in the morning. 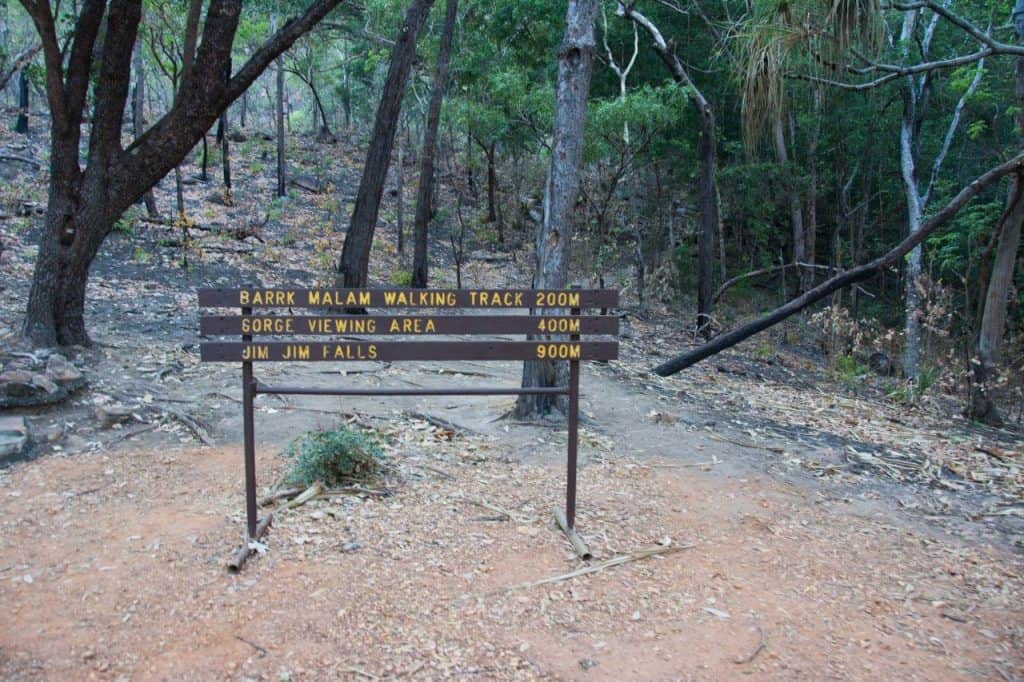 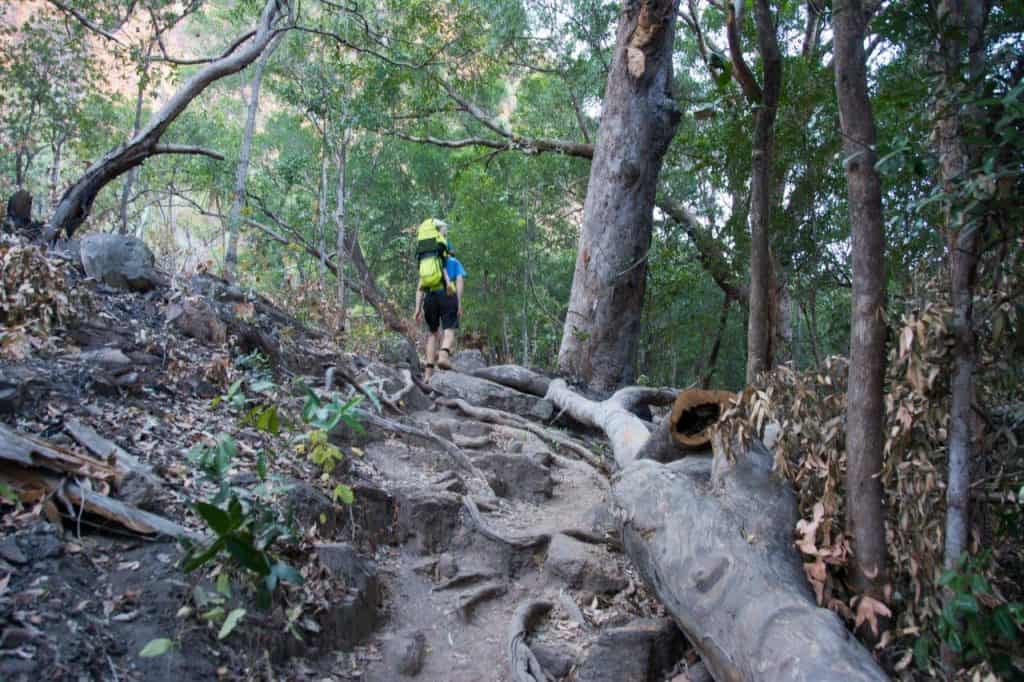 It’s a relatively easy walk with plenty of rock hopping 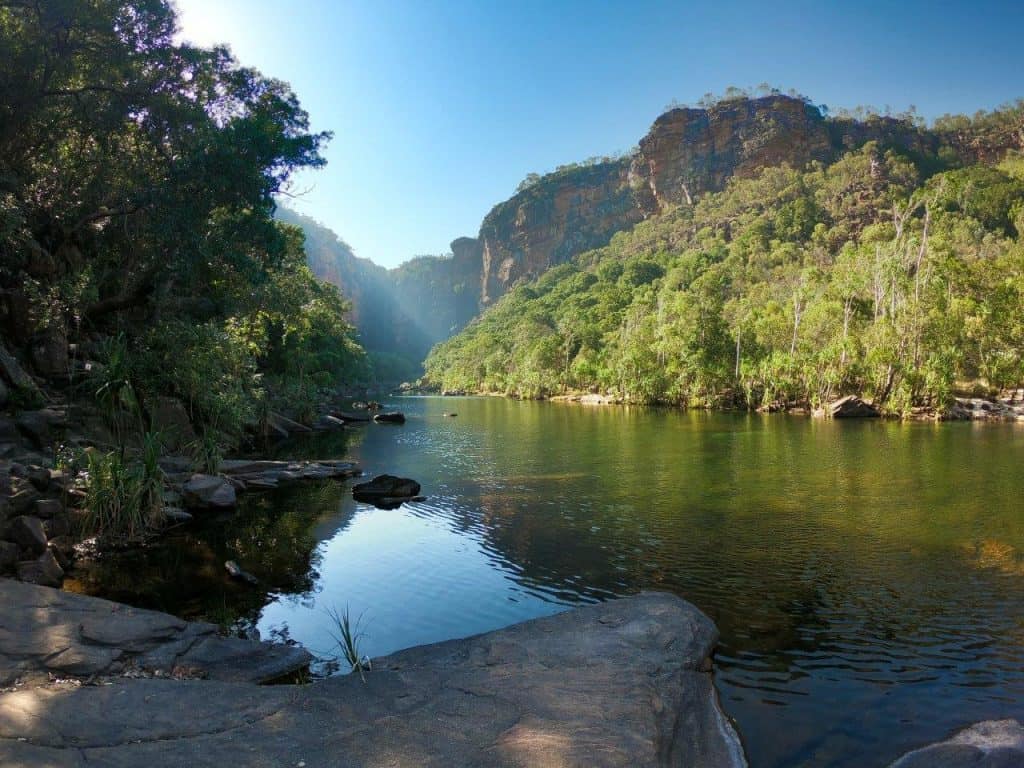 The scenery is truly spectacular

There’s lots of shade for the first two walks

For the first two walks, no matter what time of day you do them in, the majority of the walk is in the shade. This is fantastic, as even when the weather is not too hot, the sun beating down on you soon makes you feel terrible when hiking! 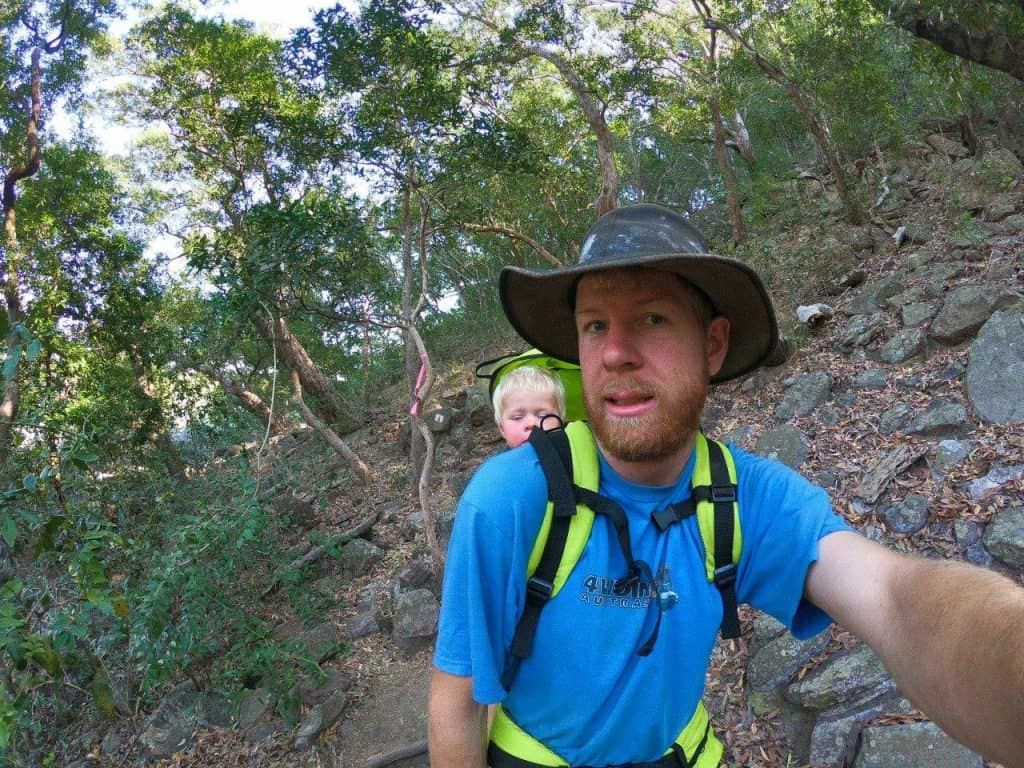 Most of the first two walks are in shade

Can you swim at Jim Jim Falls?

Kakadu has basically adopted the policy of ‘we recommend you don’t, but we have crocodile management plans in place’. Before each place is opened at Kakadu, it has to be cleared 5 times by rangers over several days for crocodiles, and this is done by visual inspections. 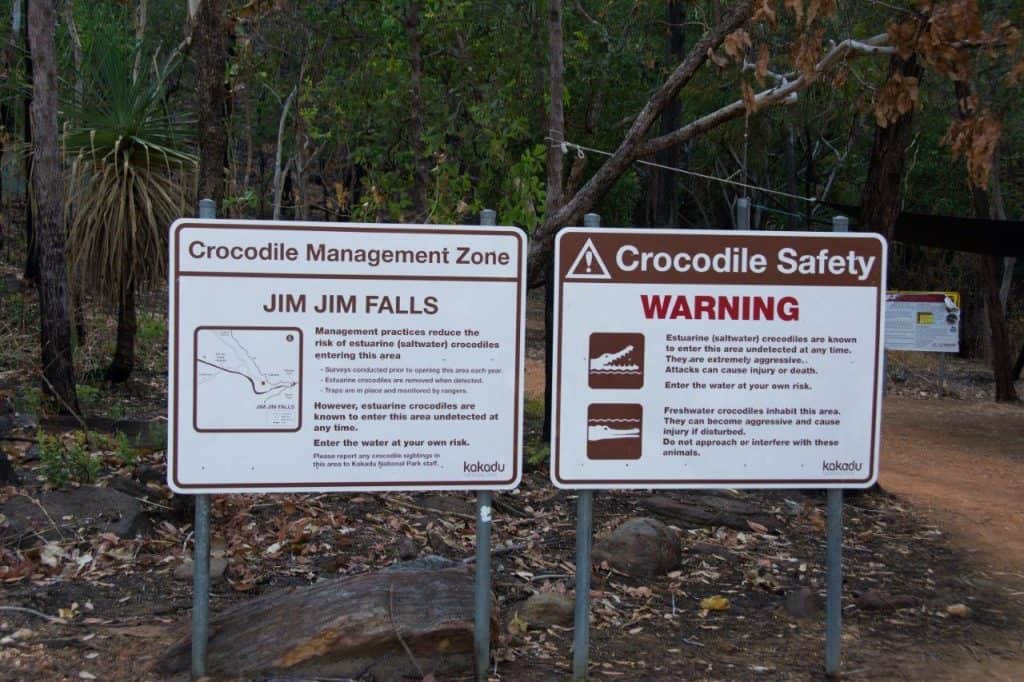 The standard Crocodile signs at Kakadu

When you get to the first pool, you’ll see a crocodile trap, where they keep some meat inside and it shuts as soon as the meat is tugged on. There have been crocodiles caught at Jim Jim before. 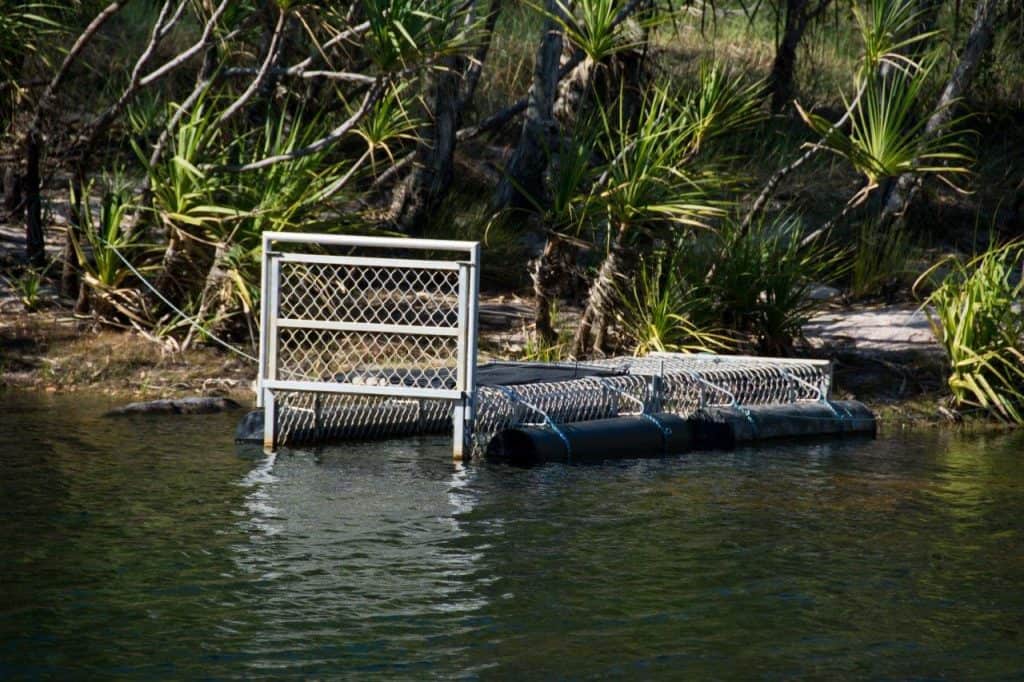 A crocodile trap near the start of the walks

As you walk along the pool, you’ll see it gets very narrow, to multiple creeks through the rocks, before opening up into a big pool, and then the massive pool under the falls. In the wet season, crocodiles can go wherever they want, and often do. However, once it dries up, it would be extremely difficult for a crocodile to get to the pool under the falls, and the one just after that.

I suppose one could come over the top, but it probably wouldn’t, and if it did, I doubt it would survive. We saw a lot of people swimming in the pool under the falls, and the one next to the beach. We chose not to swim (mainly because it was freezing), but did get very close to the waters edge. The risk of a croc being in those two pools would be extremely low, but, like the sign says: swim at your own risk! If you are still unsure about these snapping hand bags, give this a read – Crocodile Safety. 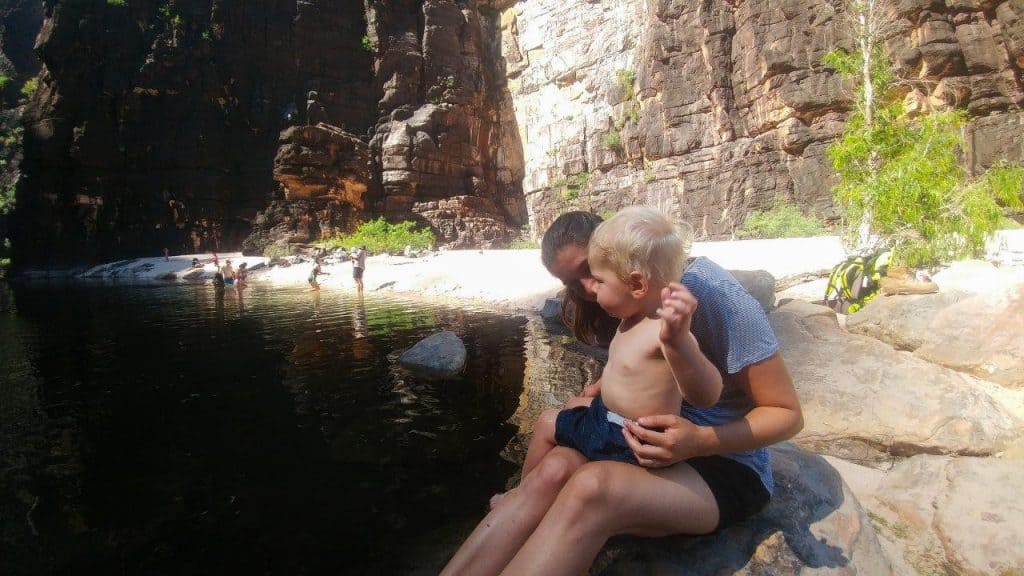 A lot of people swim at ‘the beach’

Is it worth the effort?

Absolutely. I carried Oliver in the backpack, which isn’t easy, and Sarah did it at nearly 12 weeks pregnant. Take a few breaks along the way, stop for a decent break at the end and lots of photos and you’ll have an amazing time.

We saw a couple with a fairly young baby being carried by the mother, and the dad carrying a toddler older than Oliver in his arms. Lots of work, but heaps of reward too. 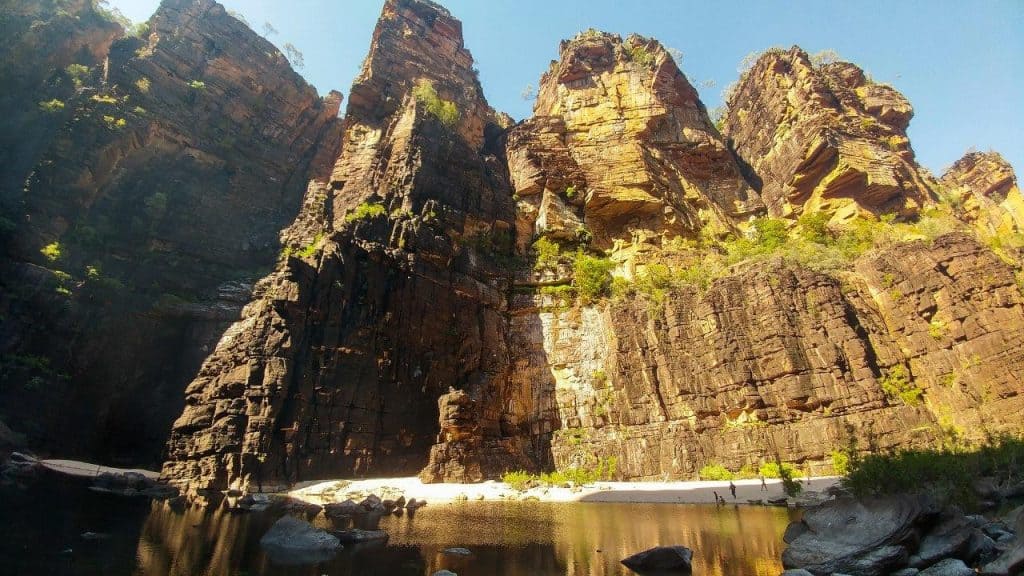 Absolutely. It truly is breathtaking in sheer size and beauty

As with most of these places, the early bird gets the worm. Get going as early as you can, and you’ll do the walking in the cooler part of the day, and have less people to compete with.

With Oliver, this is pretty hard; we left the Sandy Billabong camp at 8AM, arrived at the falls by about 10AM, sat around for an hour or so, and were back at the carpark by about 12:30PM. There were people entering as we were exiting, which is fine, but the beach was in full sun and the ambient temperature is much higher, and therefore harder work. 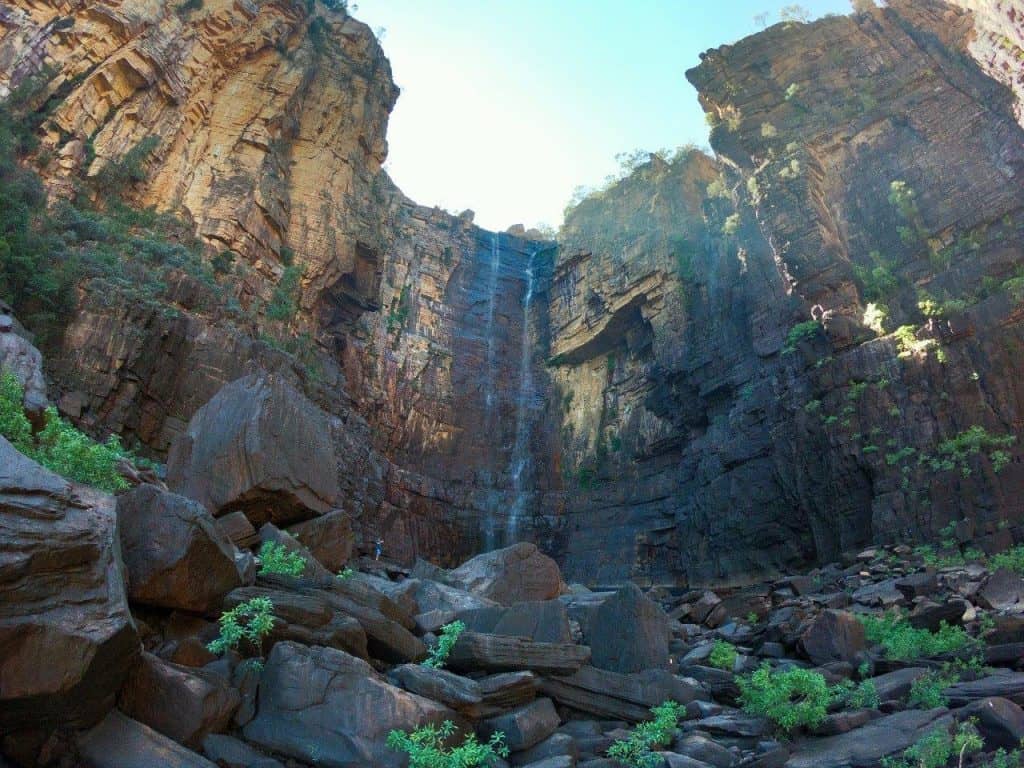 The earlier you get there, the better for everything

Take some snacks, and plenty of water

Like all of the walks in the Northern Territory, taking plenty of water is critical. For this walk, I would take a minimum of 1.5 litres per person. Snacks are great too, as you will get hungry and its a fair whack of effort. Sit on the beach, or the rocks and soak it up while you have a bite to eat! 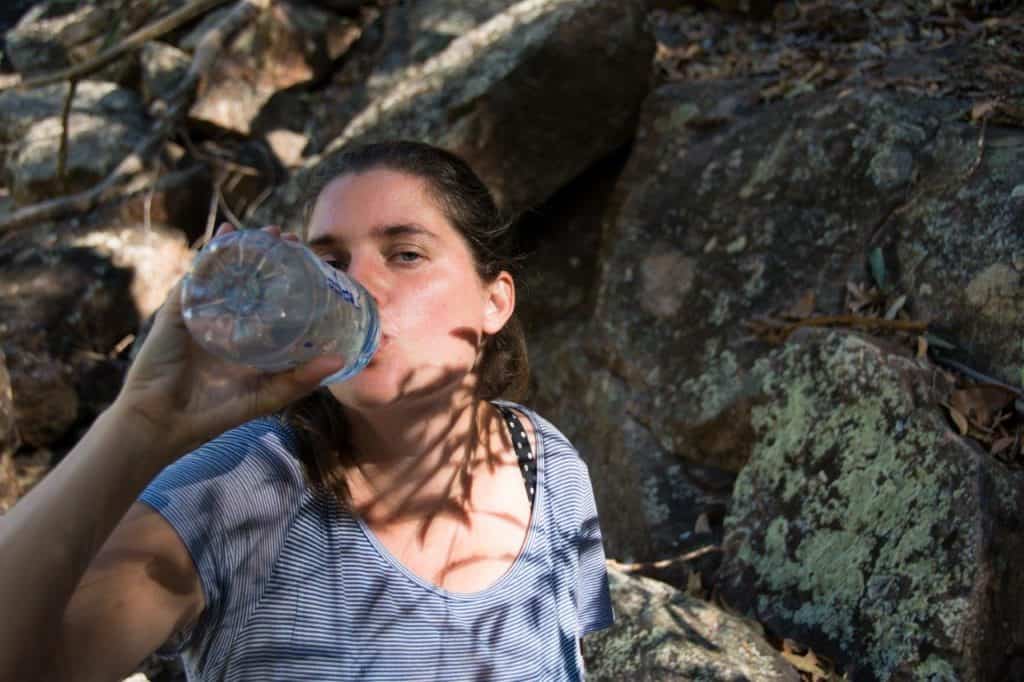 Make sure you have enough water

Can you camp there?

Yes. There is a camp ground at Jim Jim Falls, which is at the end of the 50km gravel road, and before the 4WD track. It’s quite a big area, and will accommodate any style of camping. It’s got hot showers, flushing toilets, drinking water and the ranger comes around each day to collect your fee’s. 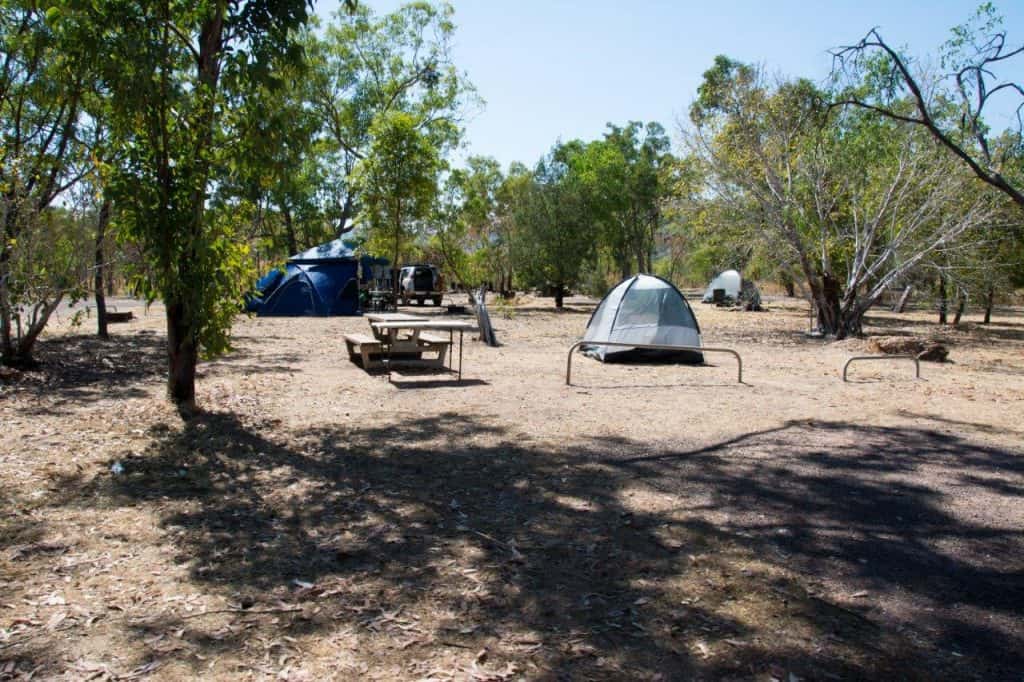 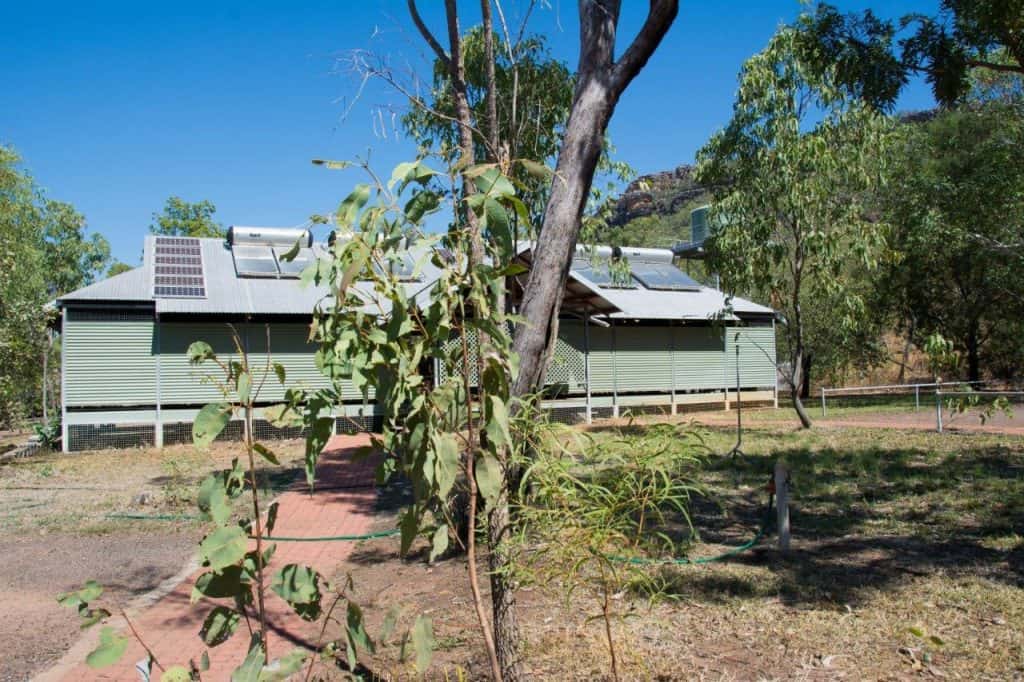 The shower and toilet block at the camp ground

Have you been to Jim Jim Falls? What did you think of it?