Swincer Rocks; our favourite camp on the Yorke Peninsula

After a couple of magic nights at Pondalowie Bay in the Innes National Park, we headed north to find another camp site, and ended up at a truly brilliant camp site on the Yorke Peninsula called Swincer Rocks.

We’ve done some pretty awesome Yorke Peninsula camping, but Swincer Rocks takes it to a whole new level, and we very nearly missed going there all together. 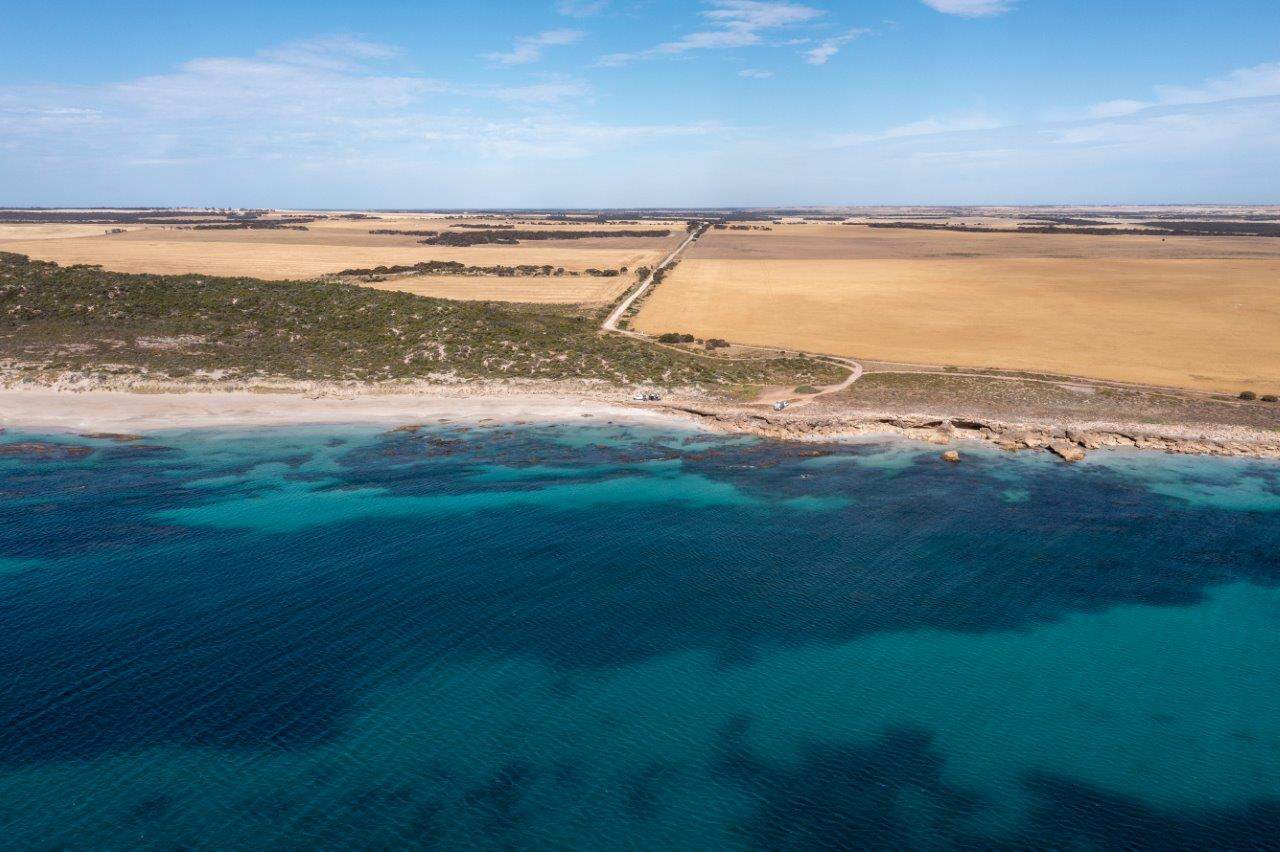 Swincer Rocks Camp Ground is spectacular, and we thoroughly enjoyed it

Having done two nights at Gym Beach already, we skipped that, and called into Daly Head. The road in was reasonable, but a little rough in sections and the views at camp were pretty spectacular.

We did see a big black snake on the way in, heading straight for someone’s caravan, and with the number of people already here, plus a 100 step exercise routine to get down to the beautiful beach we decided to keep going, and see what else we could find. 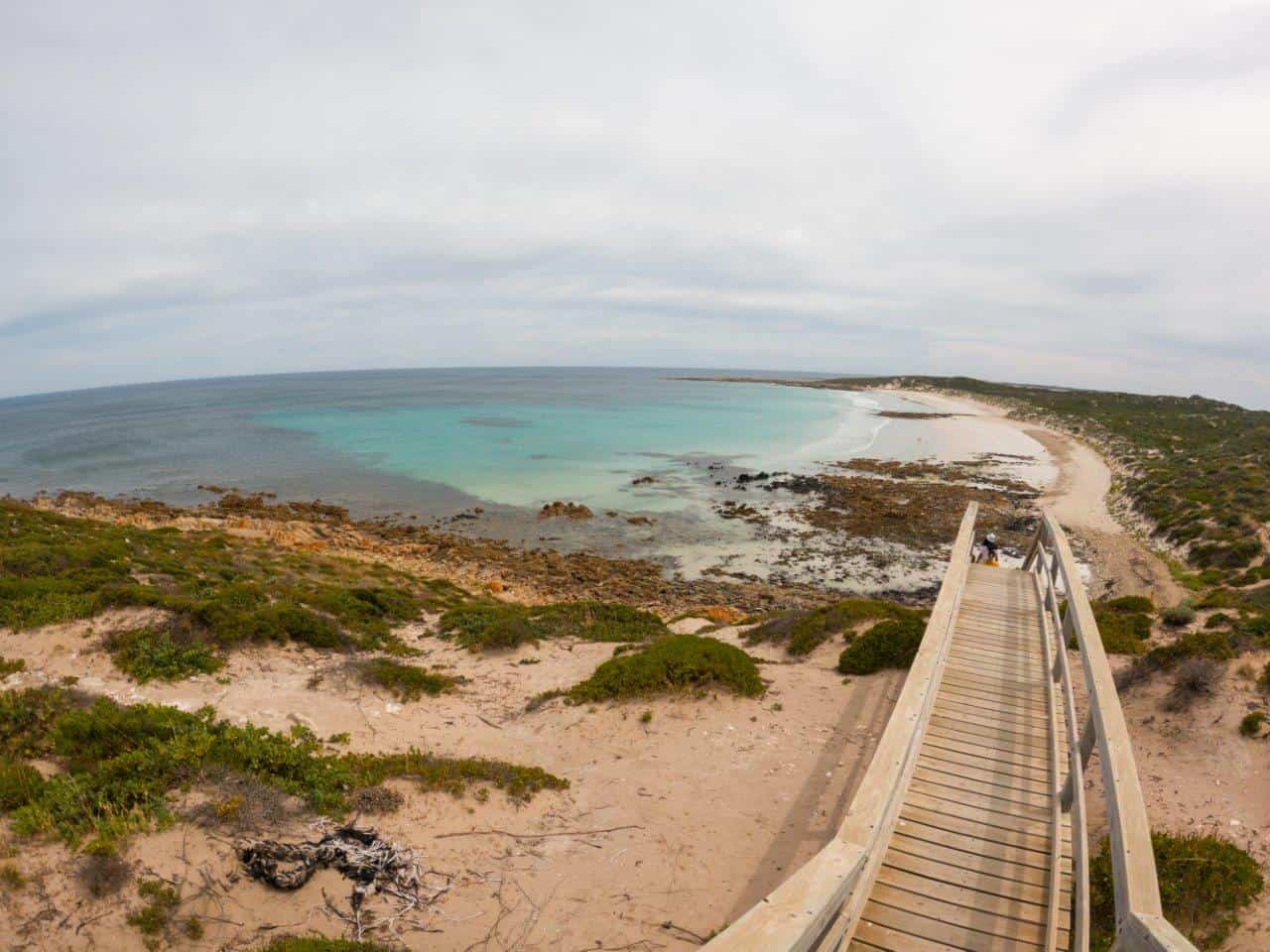 I didn’t mind Daly Head, but it was busy and a bit of a walk to the beach

Initially we’d said Daly Head, Gleesons Landing or Gravel Bay, so we called into the next stop; Gleesons Landing. I’ll be brutally honest here, and say this place did not appeal to me at all. It had a lot of exposed reef, the camp grounds were OK but nothing to write home about and the best part was a nice beach on the northern end, which we didn’t go near. The road in was also fairly average in spots!

Continuing further north, Sarah asks whether I want to pull into Swincer Rocks, and I begrudgingly say yes, despite the average photos and comments on Wikicamps. As it turns out, that was the best decision I made that day! 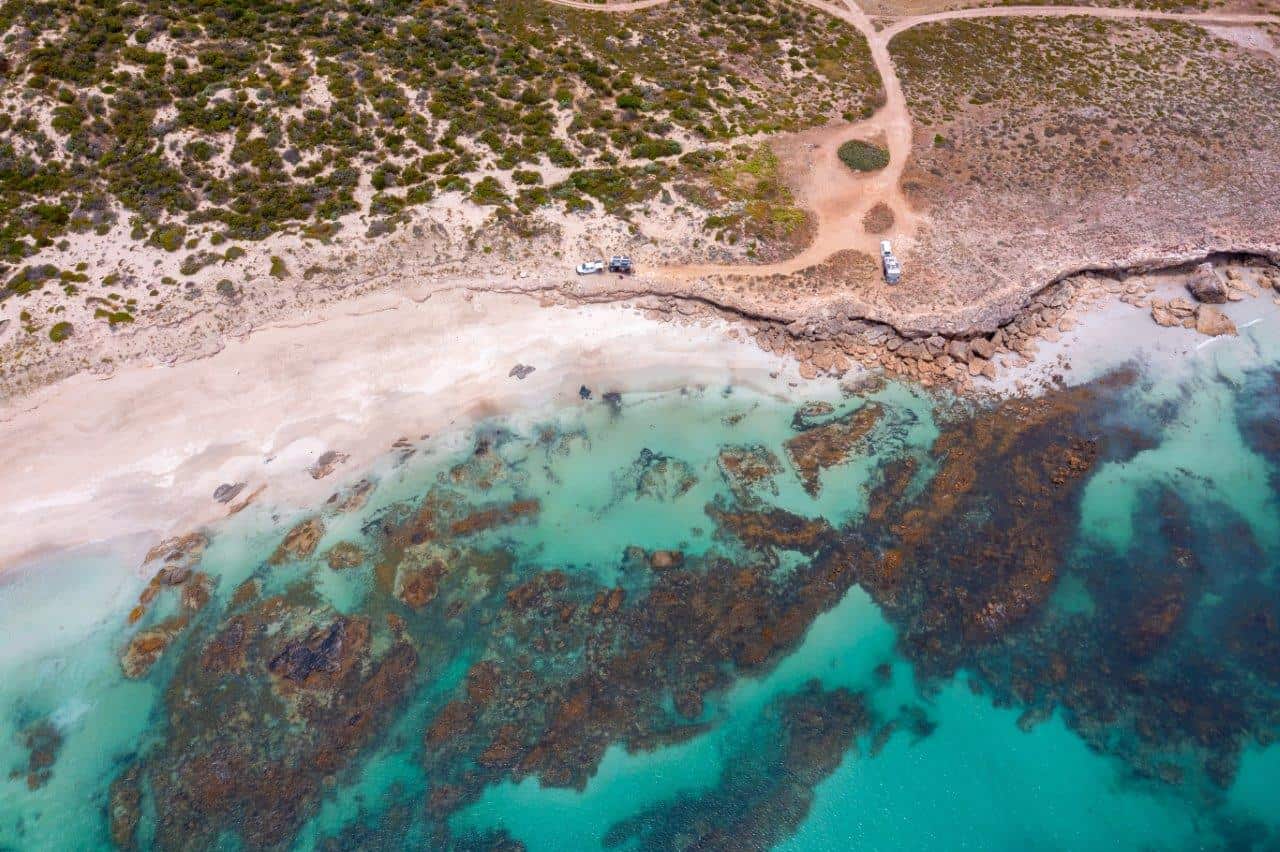 Looking down on our amazing camp site, with just us and my folks there for the night

You’ll find this camp site roughly 160km from Corny Cove, or 42km from Point Turton. Its on the way to Corny Cove and Point Turton from Marion Bay, or the Innes National Park. 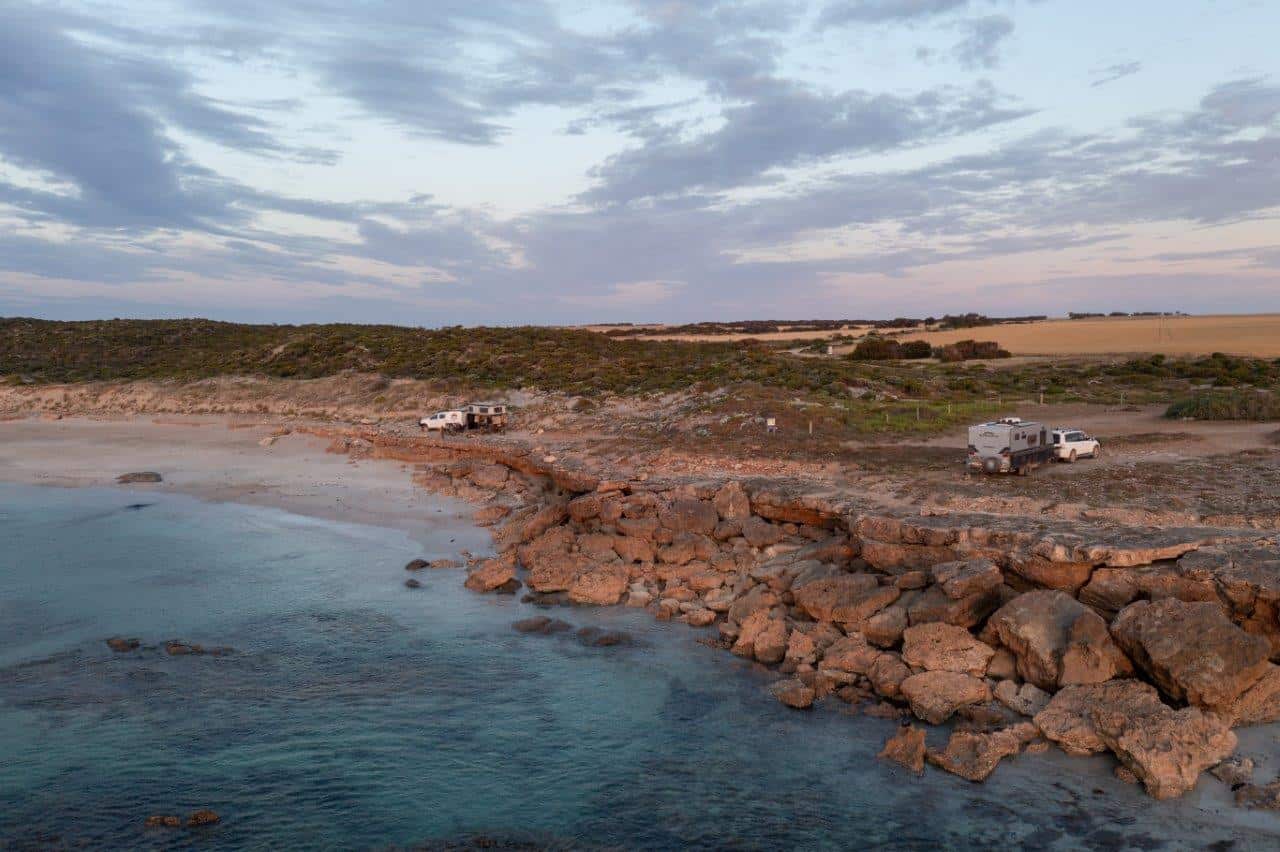 It’s not too far away from two towns

Unlike the road into Daly Head, and Gleesons Landing, this gravel road was pristine when we did it. I actually braced for a couple of sections that looked bad, but they were perfectly smooth, and just optical illusions.

I suspect the road condition is better as it gets used less often, which is a good thing.

The camp ground at Swincer Rocks is fairly open, and there’s a number of spots on the rocky cliffs and tracks. There are fences where you are not allowed to go, and a number of the spots have great views.

To get the ultimate camp ground though, head as far north as you can go along the coast; you’ll drive down a little track that comes to a dead end with a big rock in the middle, and set up there. You’d get a big van in here, but its not overly large and you might need to spend some time levelling it. 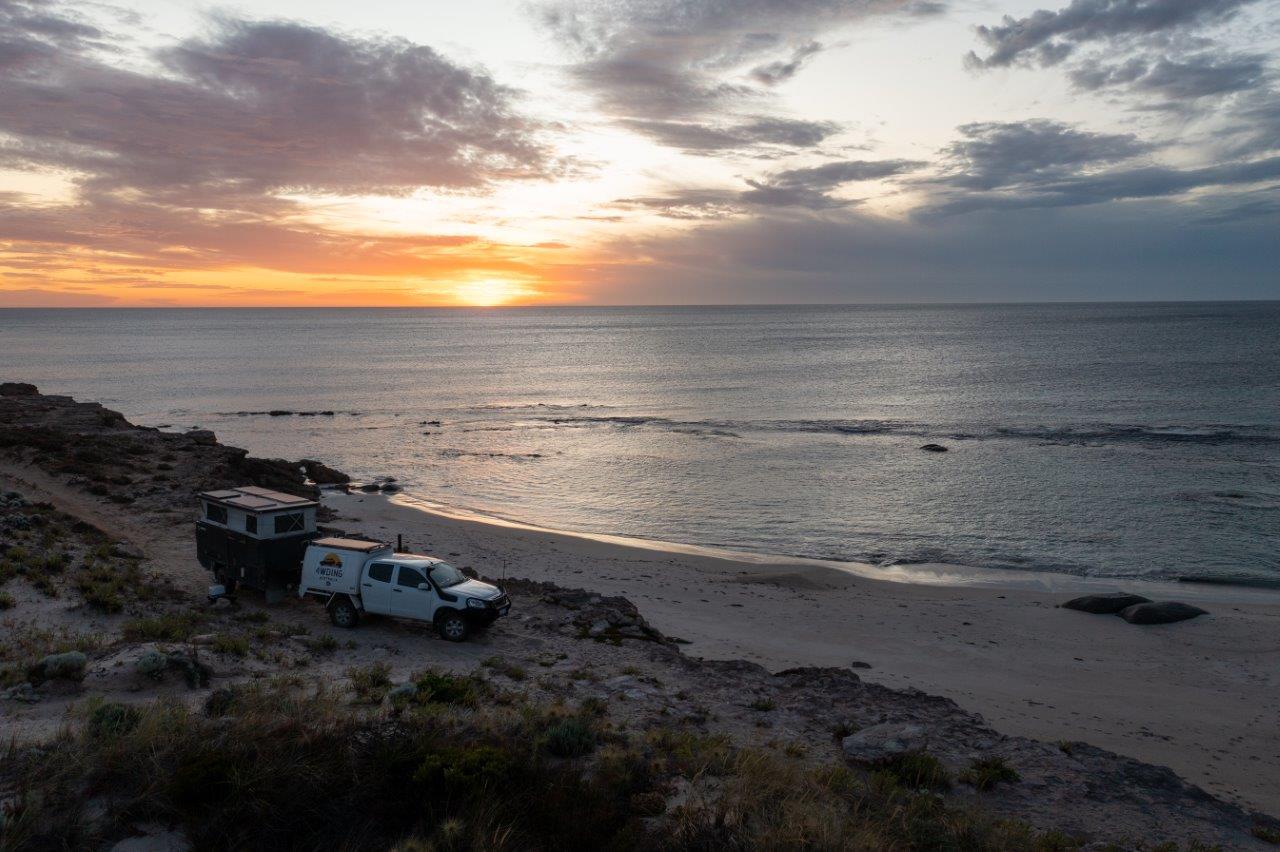 We jagged a magic camp site, metres from the water

Booking and costs for Swincer Rocks

Swincer Rock Campground falls under the Yorke Peninsula campgrounds, which means you need a permit to camp here. You can get one for a single night, week, month or year with pricing dramatically dropping, and that gives you access to any of the 19 shire run camp grounds that have space available.

You can’t book any specific spot, so you still need to be prepared to have your favourite spot taken, or to arrive at camp with minimal, or no room left! 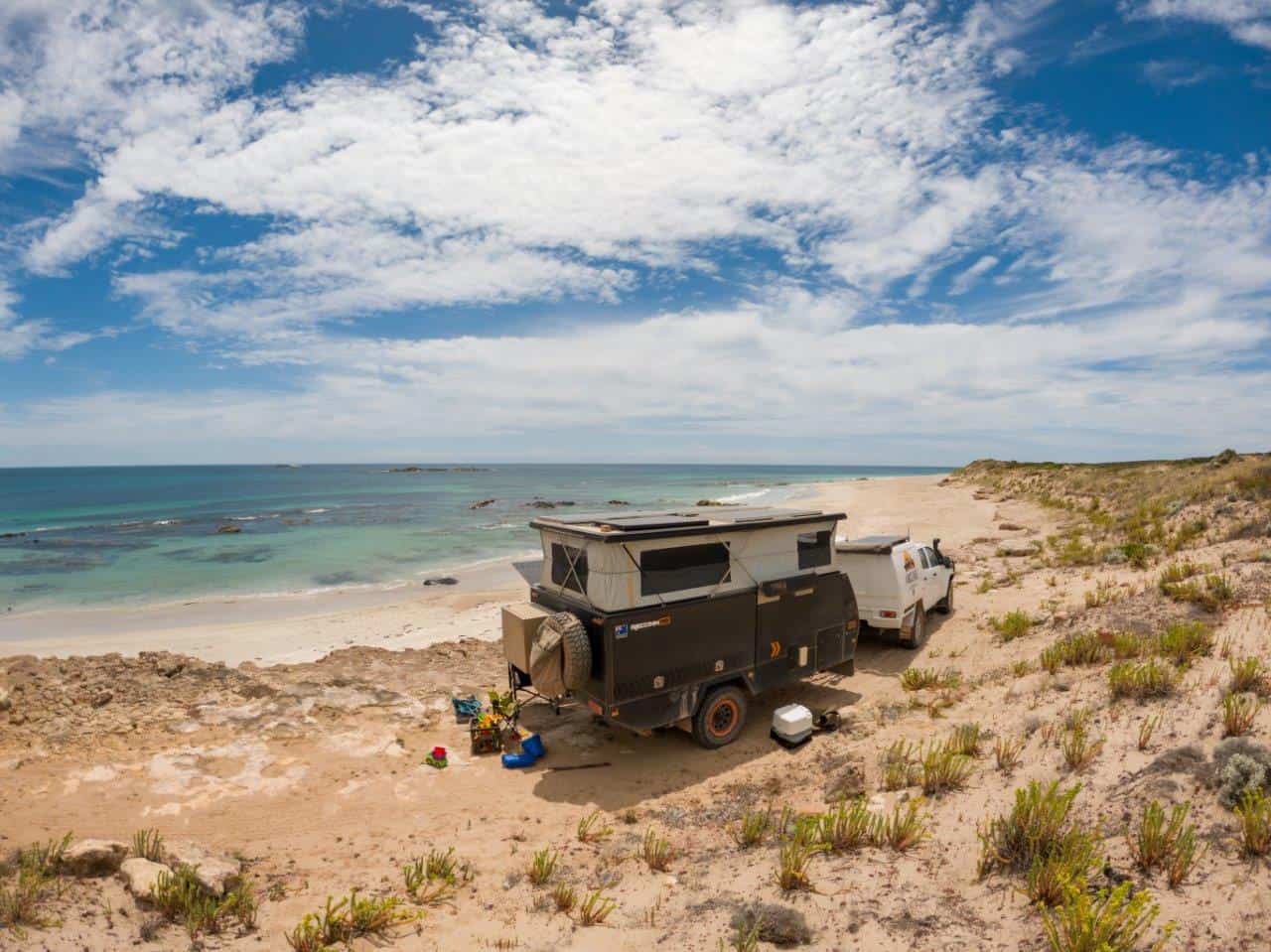 $20 well spent to camp at Swincer Rocks for the night

Despite the fact that there are zero signs here, the entire area from Point Anne down to Daly Head is a rock lobster sanctuary zone, and you can’t take them at any time of the year.

This is an important part of preserving the rock lobster population on the Yorke Peninsula, and the fine is up to $35,000, so don’t take your chances. Despite this, we did see a few people head out with hand spears, and it looks like a pretty magic place to have a dive.

Every camp site has its downsides, and after seeing everyone wearing fly nets at Daly Heads, we expected to see flies. They weren’t horrendous, but enough to be annoying and I did put my fly net on a few times. More annoying though, was the march flies that had their population reduced substantially by me.

There were a few sand flies (and I’m sure there’s some all over the coast), and some really weird green bugs, flying ants with red wings and others that we were totally unfamiliar with. None were really a problem overall, but expect there will be something. 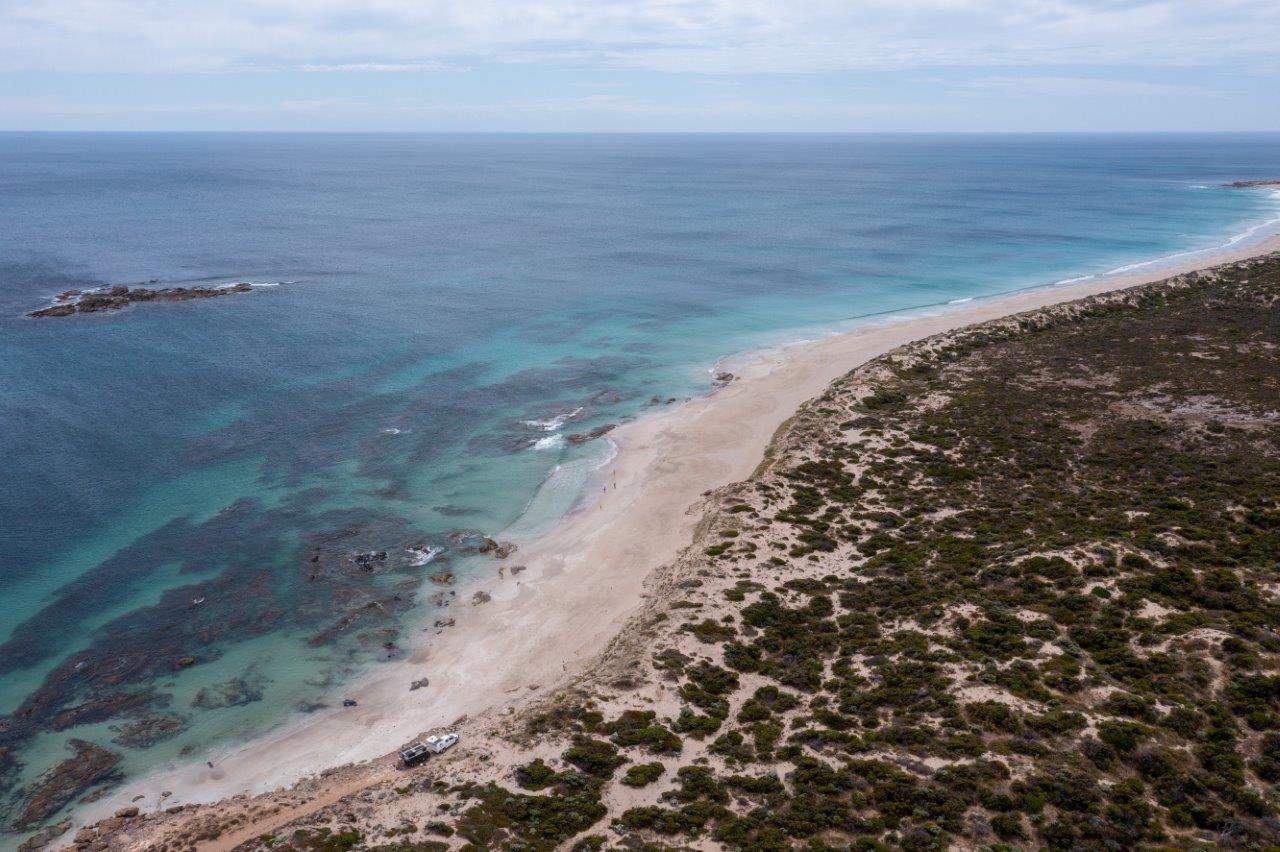 There’s always something at a camp site to annoy you. This had lots of flies and random bugs

When we pulled into Swincer Rocks and found this little camp site, metres away from the water and with a few steps down the little cliff onto a pristine beach, I immediately said lets stop here; you aren’t going to find anything better, and there wasn’t a single person in the area either.

We did meet a couple of locals later on who came down for a look, and a dive, but we had the entire area to ourselves a week before Christmas, which tells me its not too well known, or used. 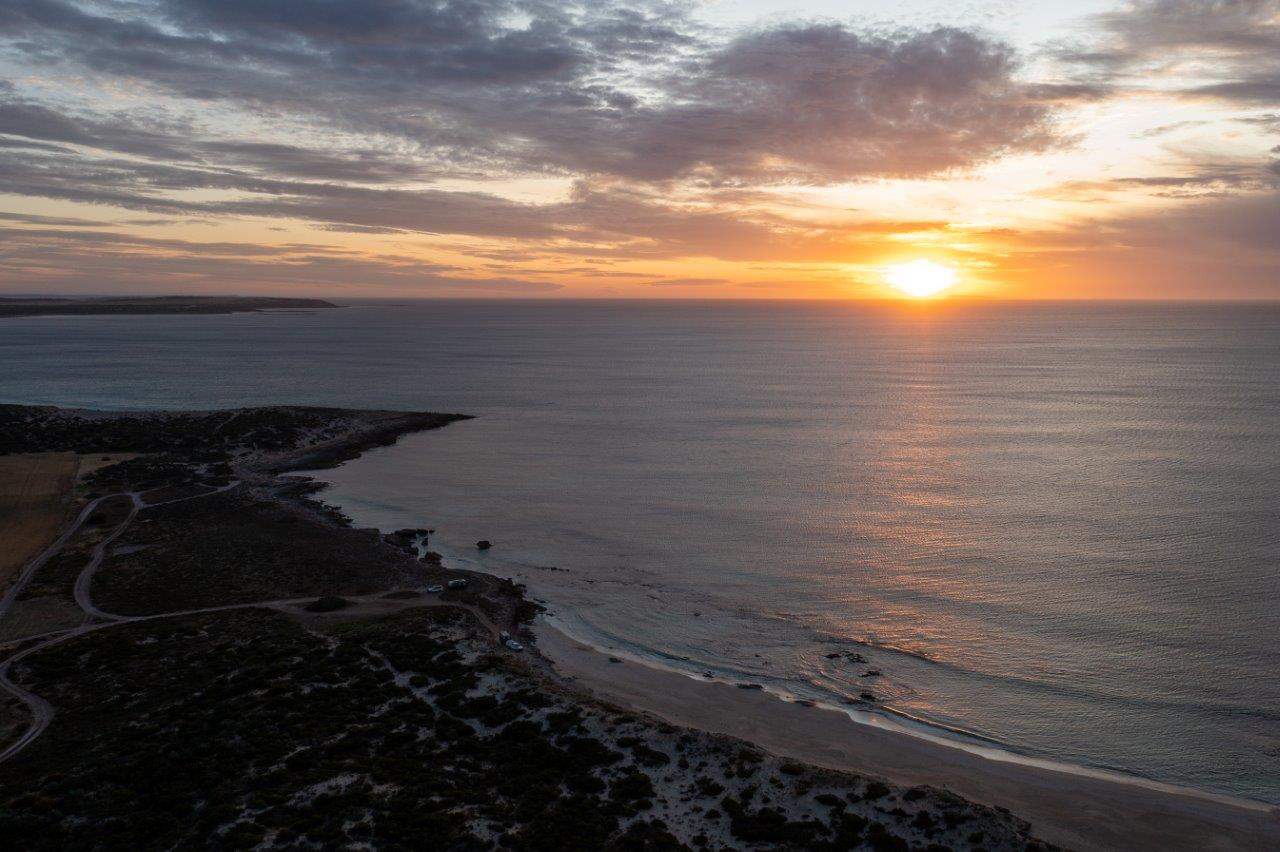 We had a ripper sunset, and the place to ourselves

We had a magic afternoon here, and despite the wind coming up a bit in the evening it really is a spectacular place. If you can visit with light winds, or offshore ones you’ll be guaranteed to love it.

You can walk for miles along the beach, swim in the crystal clear water (even I swam a few times, which is unusual for South Australia!), and the scenery is unreal. We had a brilliant sunset, and really enjoyed our stay. 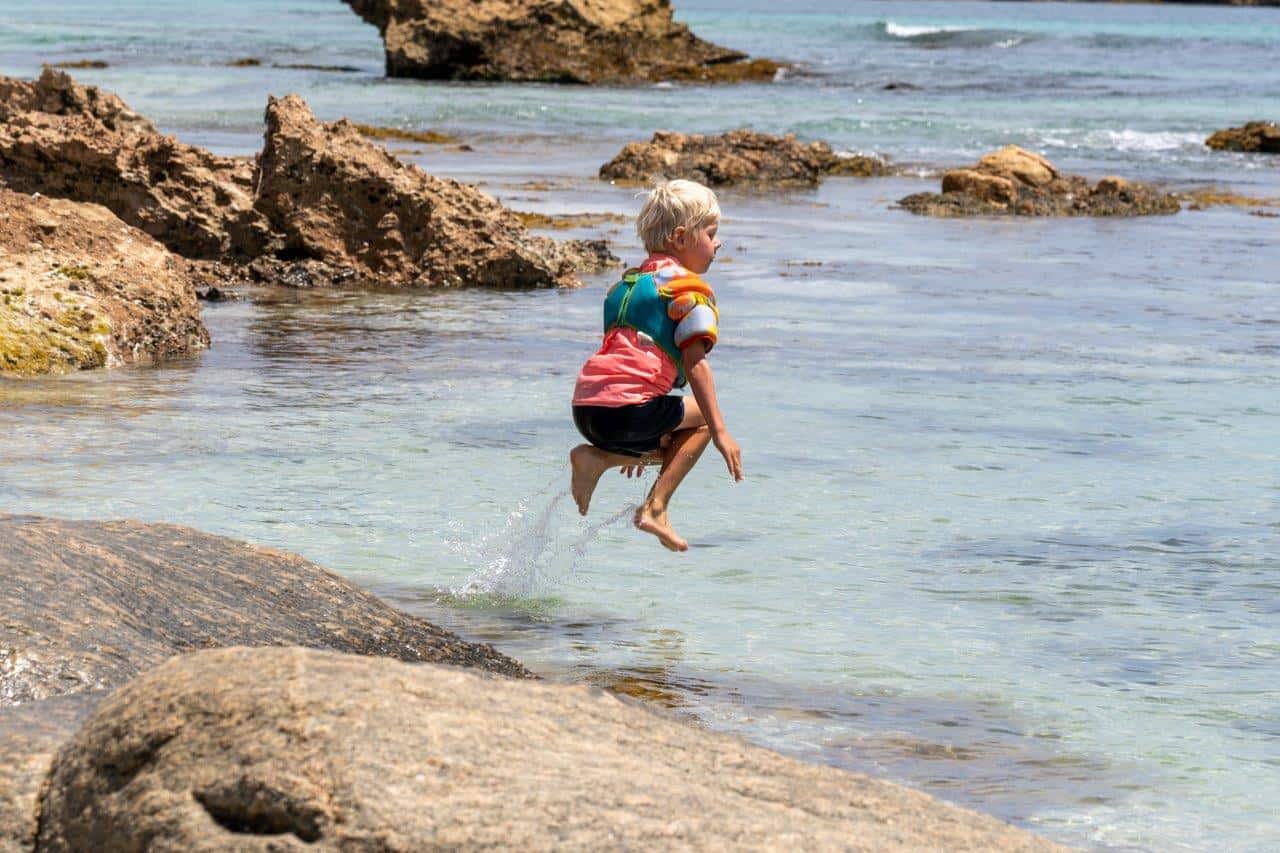 Our kids and I loved swimming here

We thoroughly enjoyed our night at Wauraltee Beach as well, but Swincer Rocks takes the cake for our favourite Yorke Peninsula Camp site with its great beach access, views, lack of people and swimmability (is that a word?!).

I will say that if you don’t get the camp site we had you might not feel the same way we did about Swincer Rocks, but there’s still some decent other camp sites too. 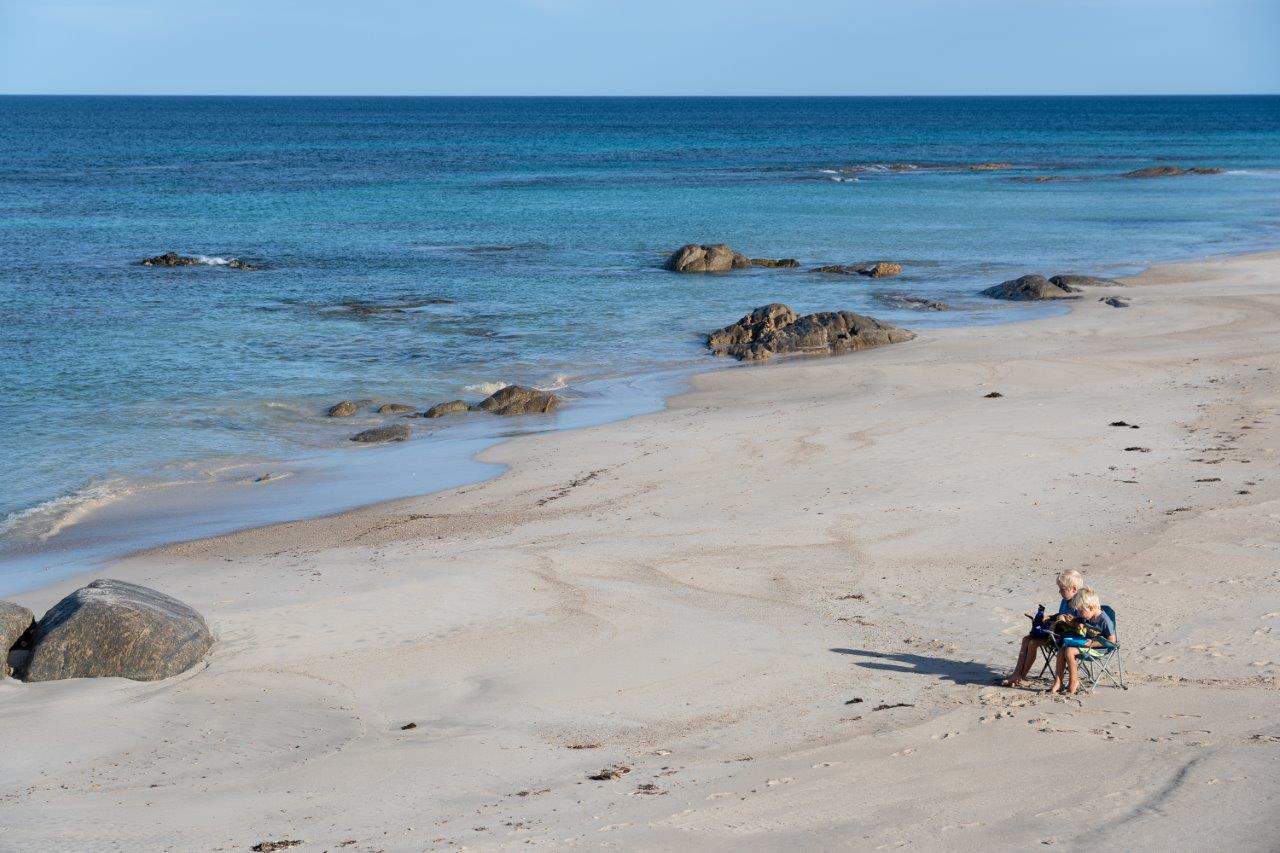