Is Lucky Bay in Esperance overrated?

Lucky Bay Esperance is one of Australia’s most well-known beaches. It’s known for pristine white sand that squeaks as you walk down to the water, friendly local kangaroo’s, crystal clear blue water and is advertised as a paradise in WA.

Despite this, I think it’s over rated.

Don’t get me wrong. I don’t dislike Lucky bay. Quite the opposite; it truly is a spectacular beach. However, almost every single beach within a 200km stretch of Esperance in both east and west directions is stunning.

Many of them are just as nice as Lucky Bay (or even nicer), but have not had the same level of publicity as Lucky Bay. This in turn translates to less people, which is always a good thing! 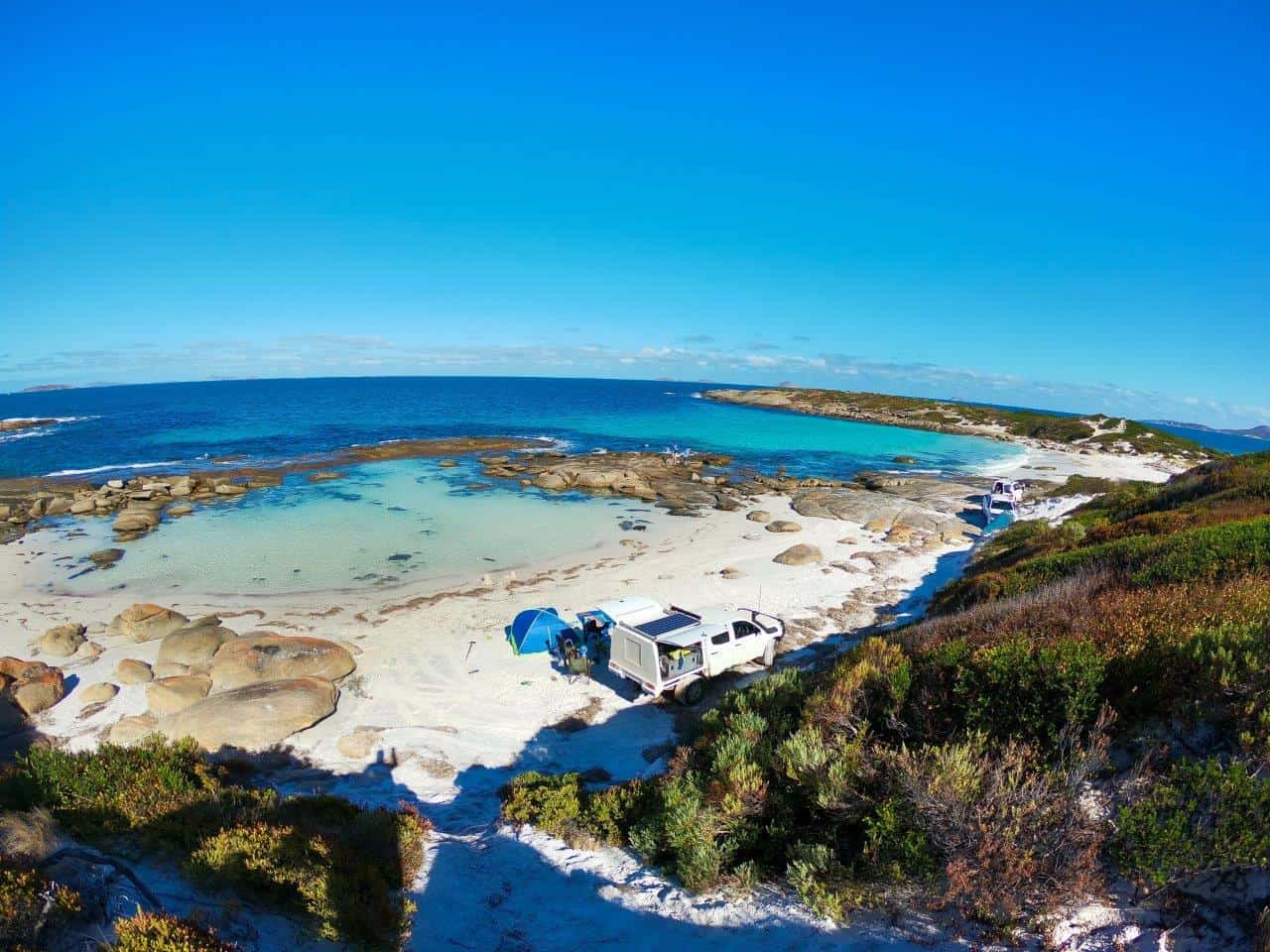 Is Lucky Bay overrated? When you compare it to this not far away, yes!

Lucky Bay Esperance has had a major overhaul, since I wrote this post back in 2015, Lucky Bay has had a huge amount of money spent on it, with much bigger camp grounds and lots of new amenities. It’s now one of the best DBCA (Department of Biodiversity, Conservation and Attractions) camp sites around.

That said, there’s still better places to go to!

No doubt you will look at the below photos, and wonder how it could possibly be overrated. I’ll get to that later.

However, know that Lucky Bay is a truly stunning spot, and one that I’d highly recommend you visit. However, do so armed with the below knowledge. 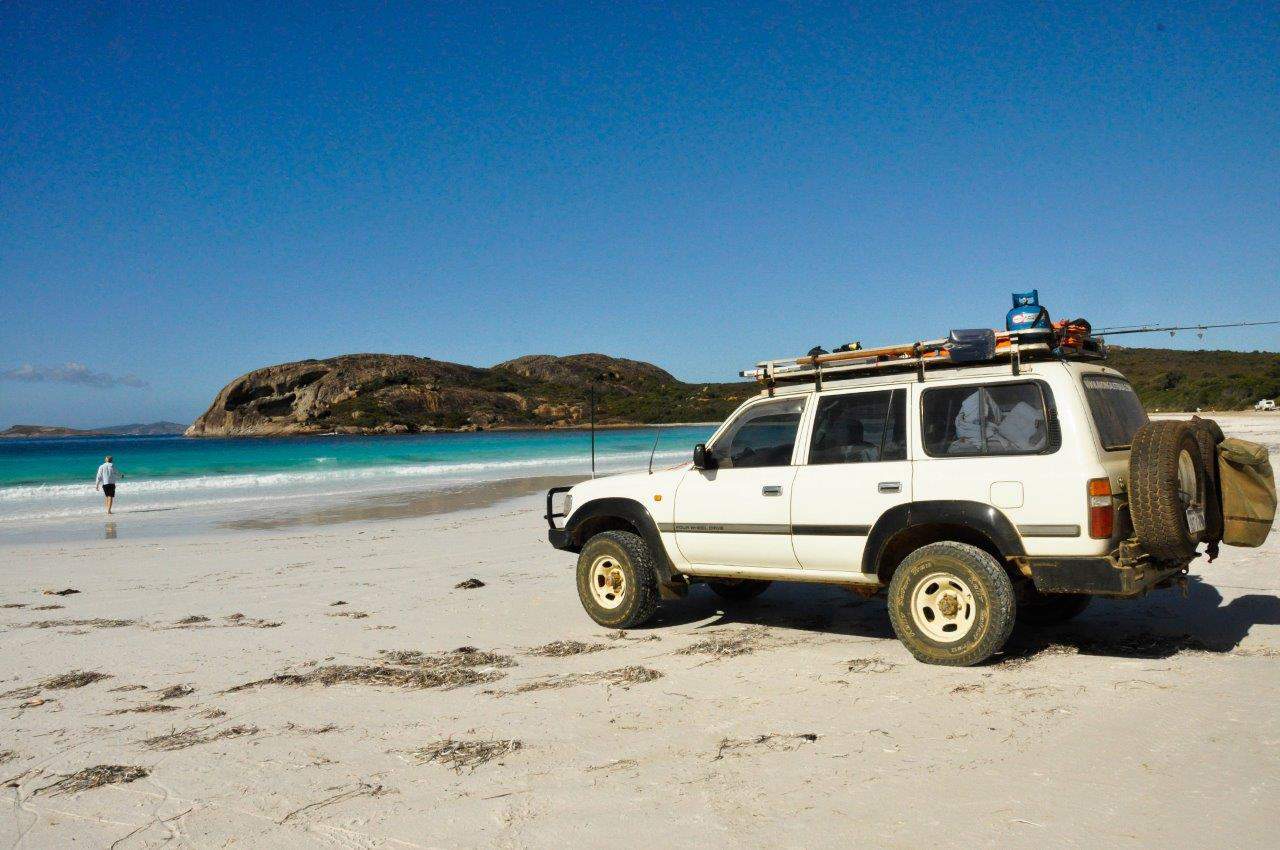 Our Landcruiser on the beach at Lucky Bay 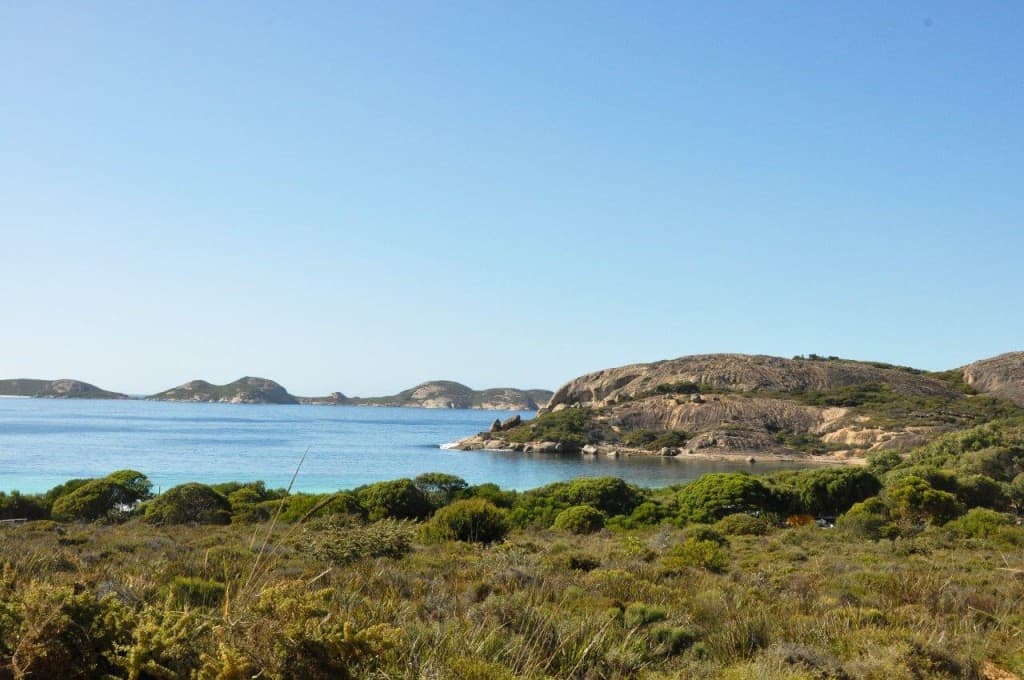 Lucky Bay coastline from up higher 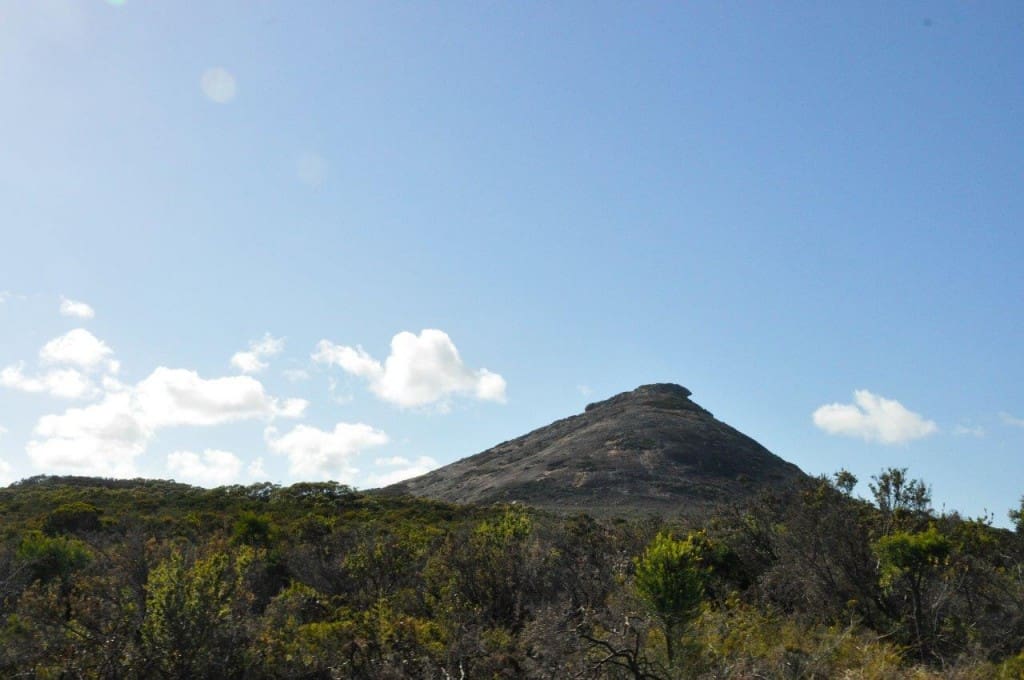 A mountain behind Lucky Bay

My experience at Lucky Bay

Up until 2014, I’d never been to Esperance. Pretty well every place that mentions Esperance has a minimum of a few lines where they rave on about Lucky Bay.

You must go to Lucky Bay. Lucky Bay is the best beach in Australia. The sand is the whitest you will ever see. Make sure you go to Lucky Bay. I suppose this had built up an impression that ultimately didn’t come to pass. I felt let down driving into Lucky Bay.

We had planned to spend a couple of nights at Lucky Bay camp ground, and despite being told how busy it was, the impression we had in our minds made us push onwards. However, after getting in touch with the ranger and finding out that the camp sites are fully booked by 10AM every morning in peak season, we had no choice but to reconsider our options.

The plan was to go from Thomas River to Lucky Bay, which would have required a very early start to be there in time, and then there was no guarantee that we would get a spot anyway.

We were also told that the camping grounds are not very suitable for our setups, as you camp away from your vehicles.

We decided to head down to Duke of Orleans instead, and after a quick drive through the caravan park fell in love with it. We stayed about 3 nights at Duke of Orleans, and absolutely loved it. The beaches are truly magnificent, there are hardly any people to battle it out with and you could come back to a nice grassy camp ground with a hot shower!

Reluctantly a few days later, we packed up and left Duke of Orleans, heading on to Stokes National Park. On the way though, we called in at Cape Le Grand Beach (and camp grounds) and then Lucky Bay.

My first thought when we pulled into Lucky Bay was ‘I’m so glad we chose not to stay here’. Why?

Your camp ground is the centre of your stay. A nice campsite, in a great location makes all the difference. Being such a popular place, I was expecting the Lucky Bay Camping area to be spectacular. However, it was not. Let’s be straight here; the facilities are good, but the way the camp site is set up is very average.

The camp ground consists of two dirty sand patches that are pretty small. In those, everyone who camps puts their tent up. For me, that is enough to put me off staying at Lucky Bay. Part of the reason I go camping is to take a break from people. I don’t mind being camped 30 meters away from the next group, but these tents are pretty well back to back.

The caravan/camper trailer section is identical; a tiny gravel patch where the trailers are parked meters away from each other. Not my idea of an enjoyable campsite.

Whilst I understand there are no doubt reasons for the way the camp ground is set up, it really lets the place down. You can’t bank on getting a spot there in peak season unless you get there seriously early, and if you can’t find a spot, it’s not just a 5 minute drive back into town.

It is not suitable for a group of people to camp; most of the tents we saw were smaller, as space is very limited.

Looking online at the DPAW website, it says they have room for 25 individual camp sites (tents/camper trailers/caravans), with two open sandy spaces (one for 8 tents and one for 12 tents). 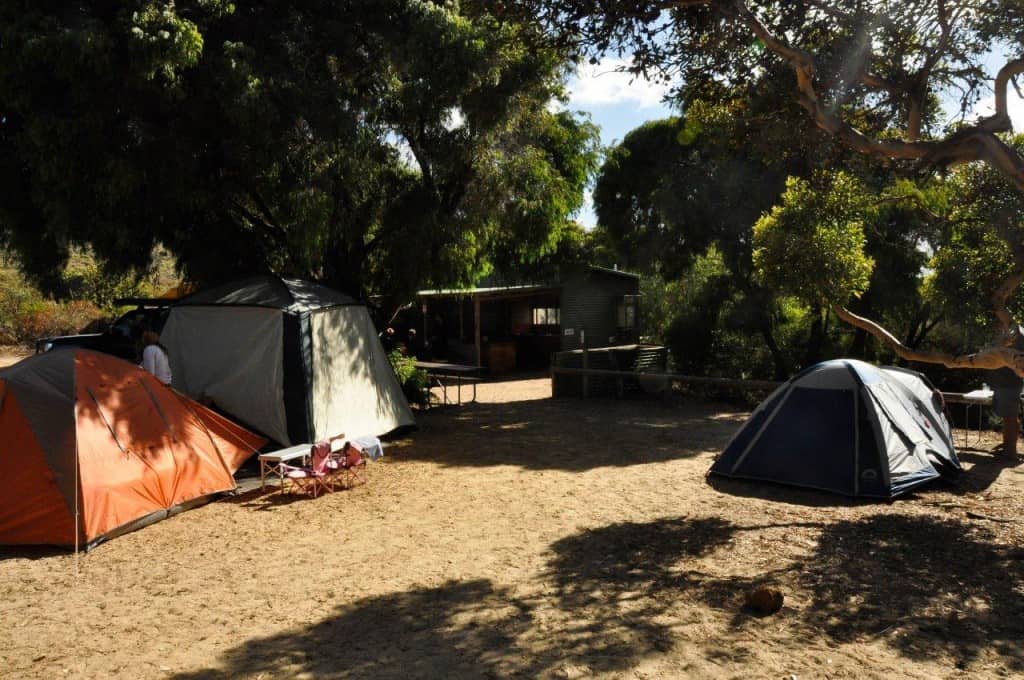 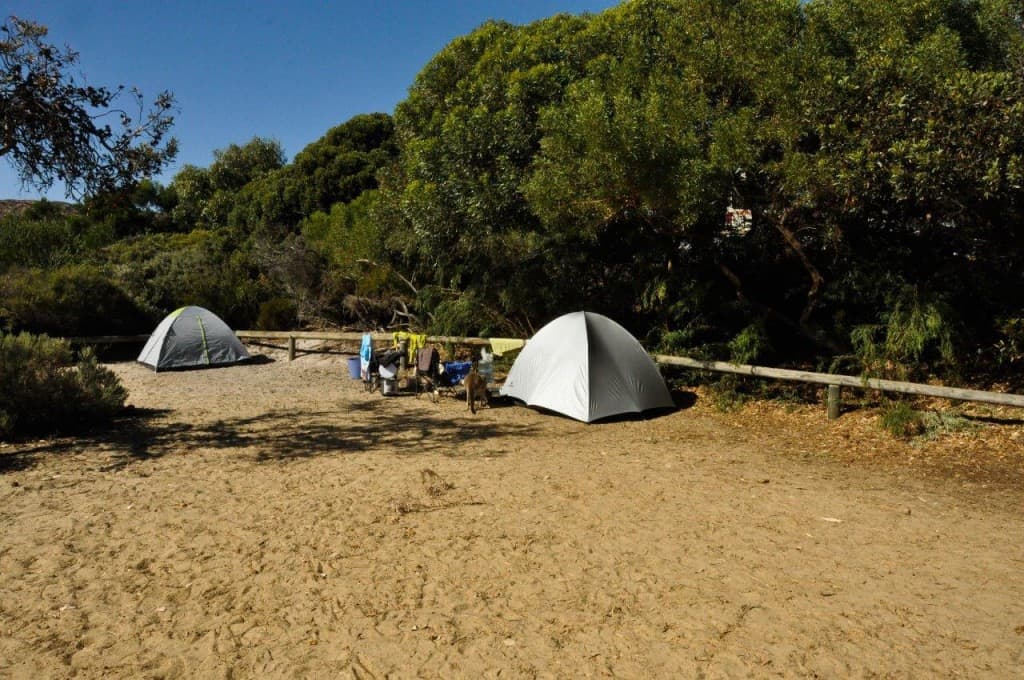 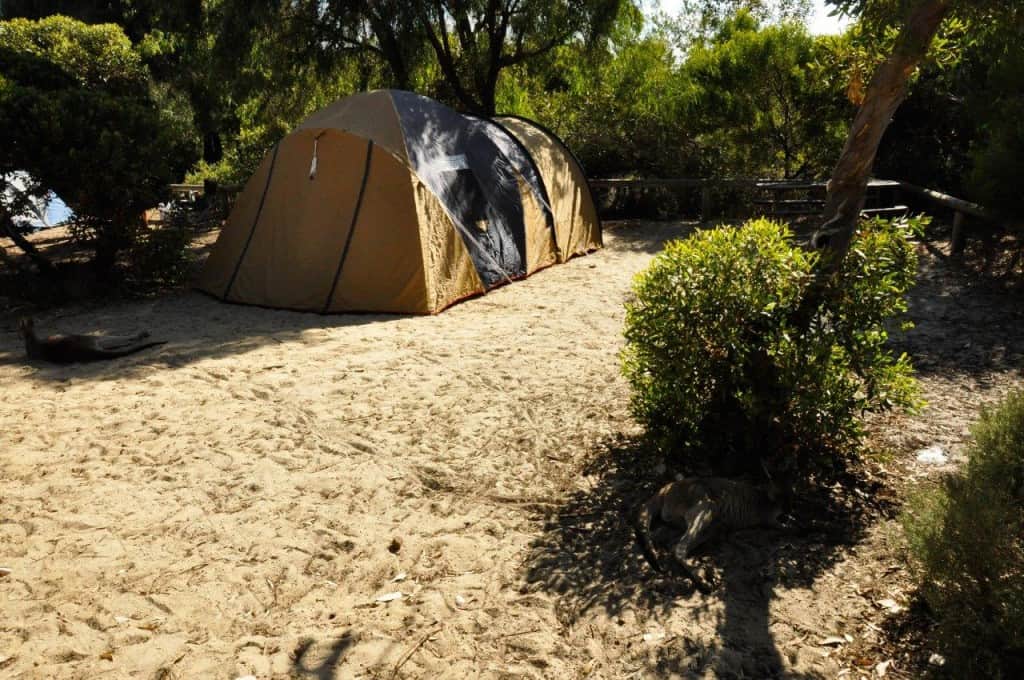 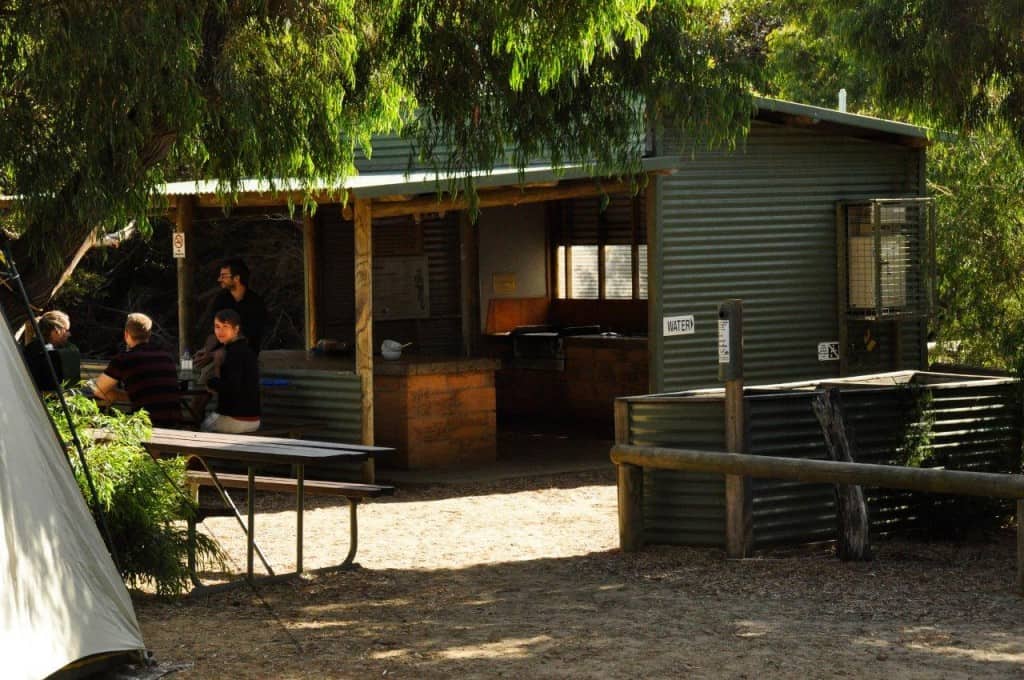 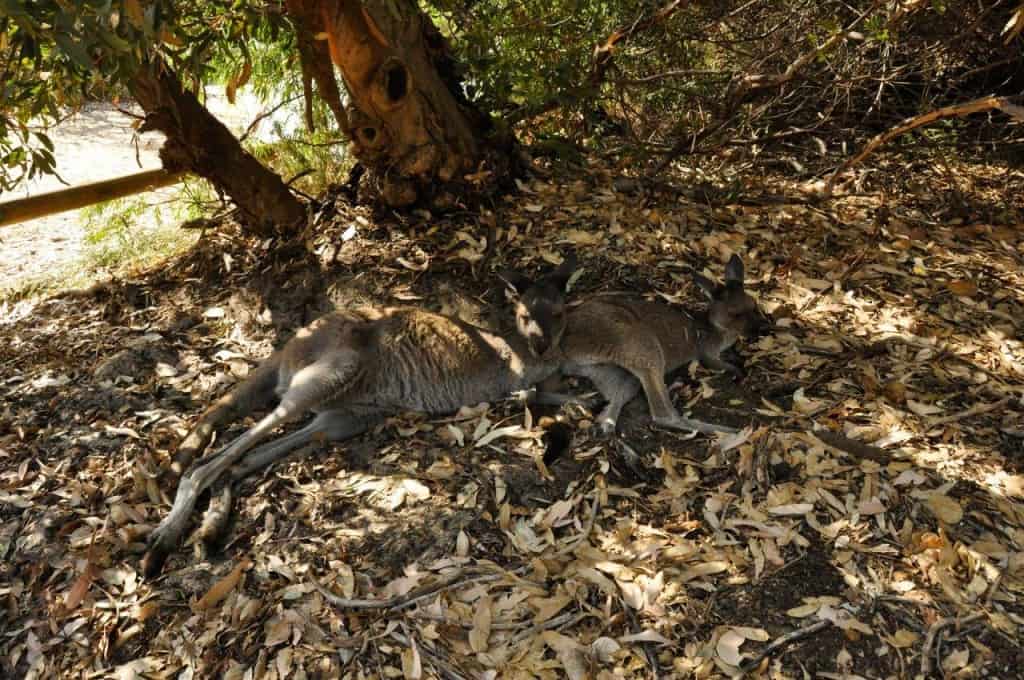 Locals relaxing right next to the tents

You can’t book (now you have to)

With a place that is as ridiculously busy as it is, online booking is a pretty simple solution. Dwellingup was suffering the same problems, but the online booking has made a huge difference. I don’t think it’s fair for people to drive an hour from Esperance just to find out they can’t accommodate any more people.

Way too many people (yep, still the same)

No doubt this is a direct result of the huge publicity that Lucky Bay gets. That, and the fact that it is pretty close to Esperance makes it the ‘go to’ spot. Having just come from Thomas River (29km of beaches) and Duke of Orleans (where you can always find your own private beach) I was a little shocked to see so many people.

I’m not against people; I love seeing everyone out and about, enjoying this amazing country. However, given the choice, I will take somewhere that is quiet over another place that has a heap of people in it!

Should you visit Lucky Bay?

Yes, you should. Don’t let this post put you off visiting a truly spectacular beach. However, know that there are stacks of beautiful beaches around Esperance that would give Lucky Bay a run for its money!

If you manage to get a spot to camp there, you will be in a fantastic location. Make the most of it! 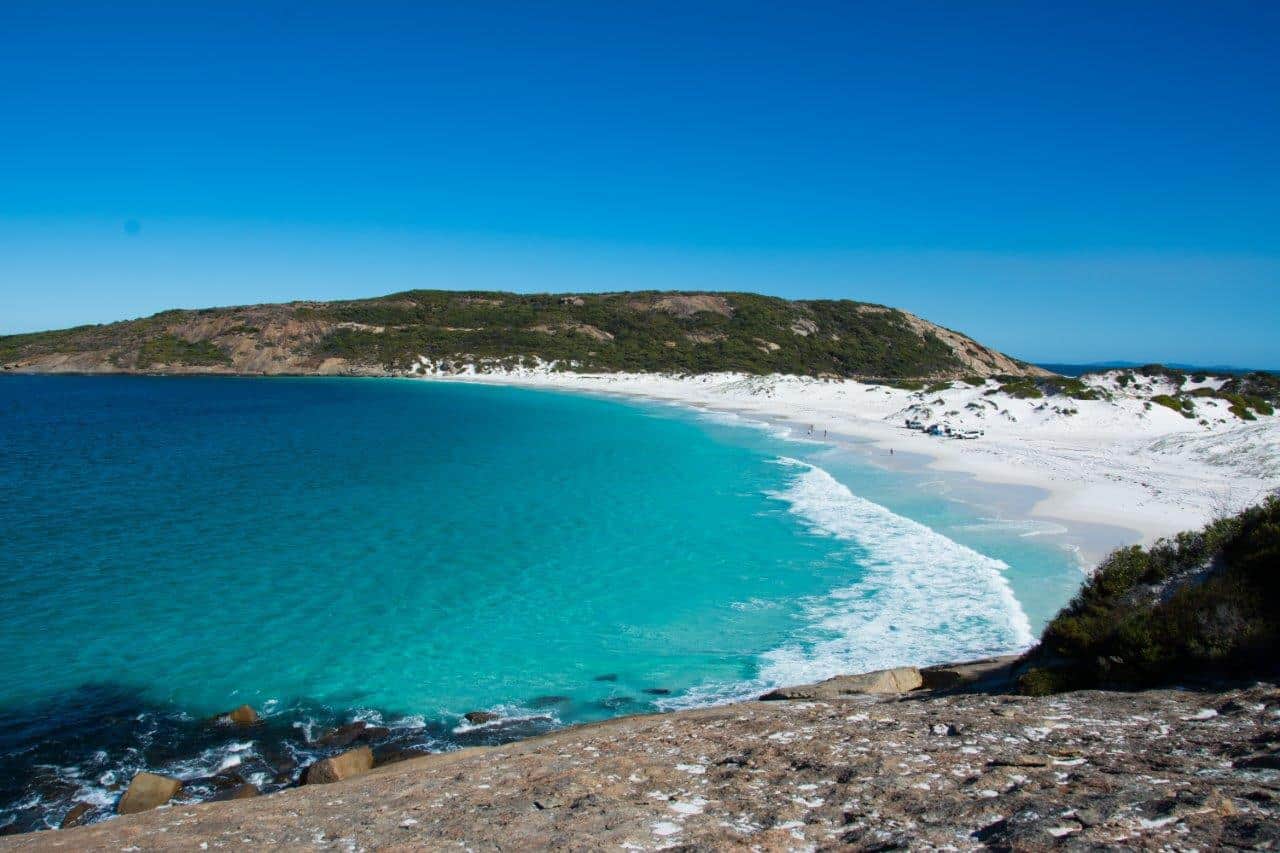 Lucky Bay is amazing, but there are other beaches that are just as good, or better!

Not too far away is Le Grande Beach, which has another DBCA camp grounds. The facilities are not quite as nice as Lucky Bay, but the camp sites are separated properly, and the place is much less well known.

The beach itself is just as nice as Lucky Bay though! 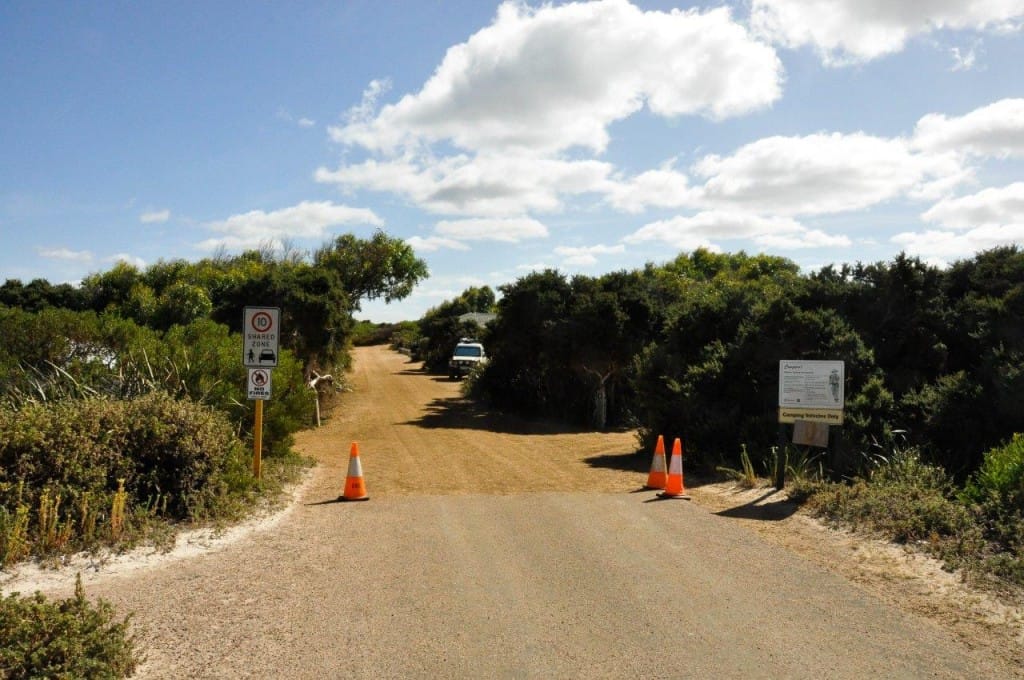 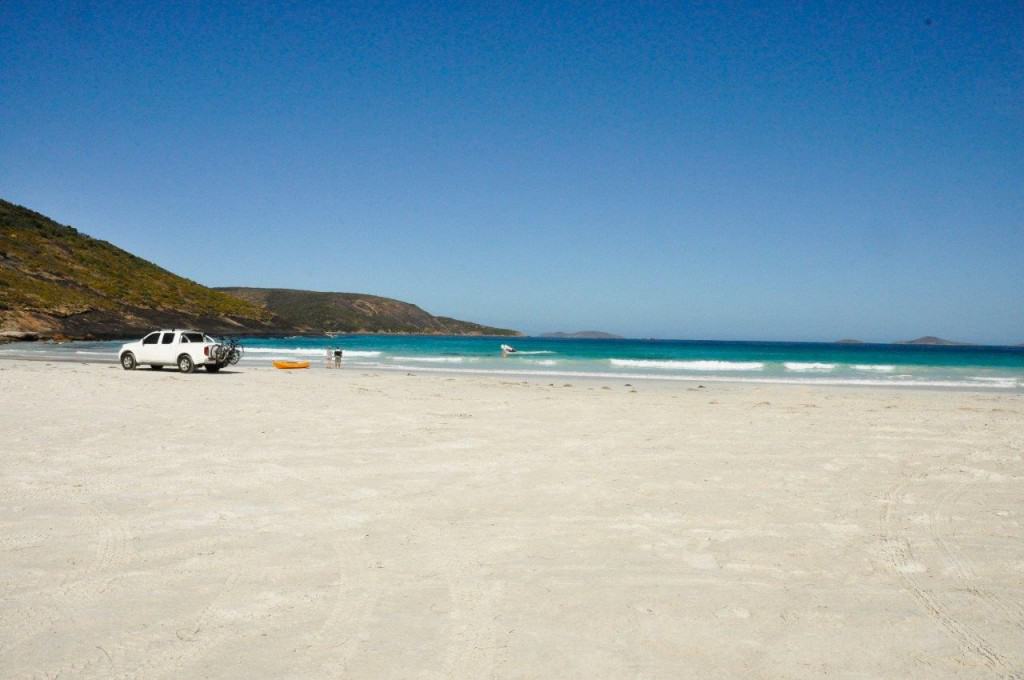 Thomas River is a truly amazing place. Even if you only have a 2WD, you can get to Little Tagon Beach which is stunning. If you have a 4WD, you have 29km of beach that you can drive along; guaranteeing you a perfect slice of the Esperance paradise. Big Tagon Beach is stunning too.

The camp grounds here are split in two – one up high that is brand new with great facilities. The one closer to the water is shire owned (but run by the DBCA).

The facilities are older and not as nice, but we stayed there in preference to being close to the water. We did not regret it. The camp sites in both locations are well spread apart. 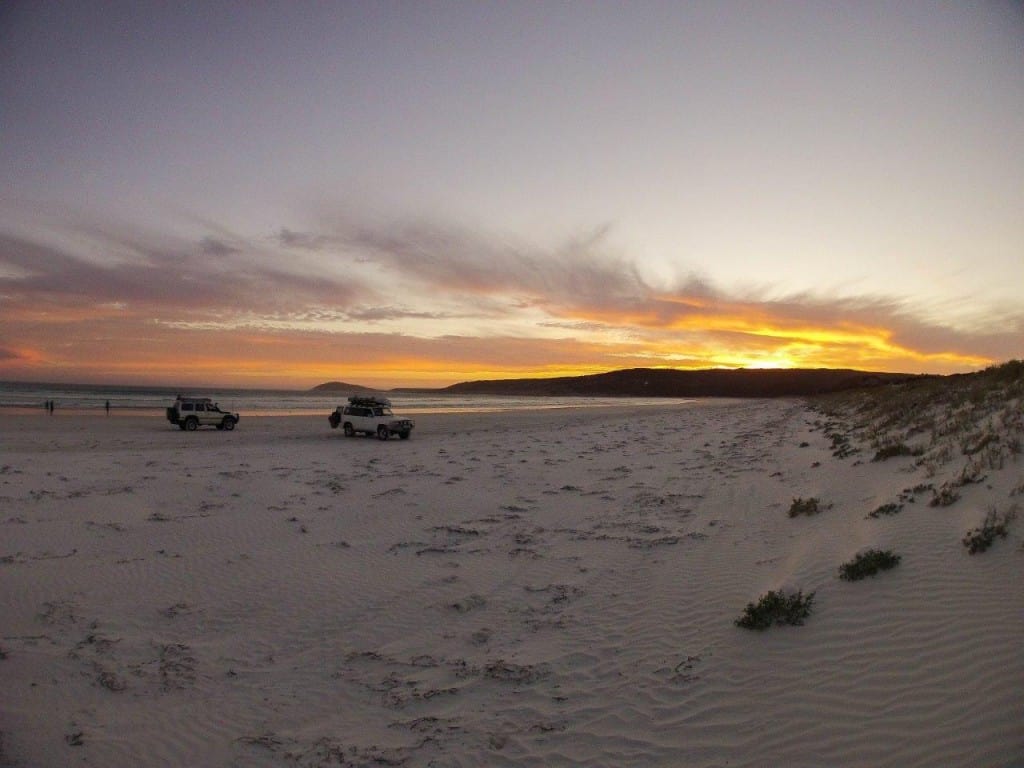 One of Thomas River’s amazing sunsets 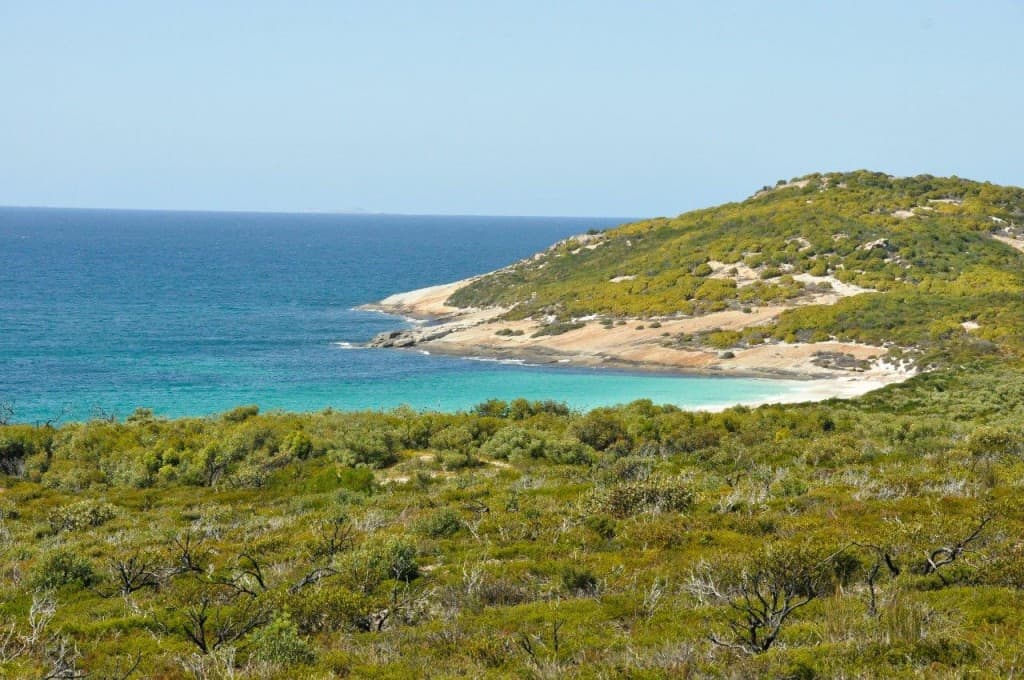 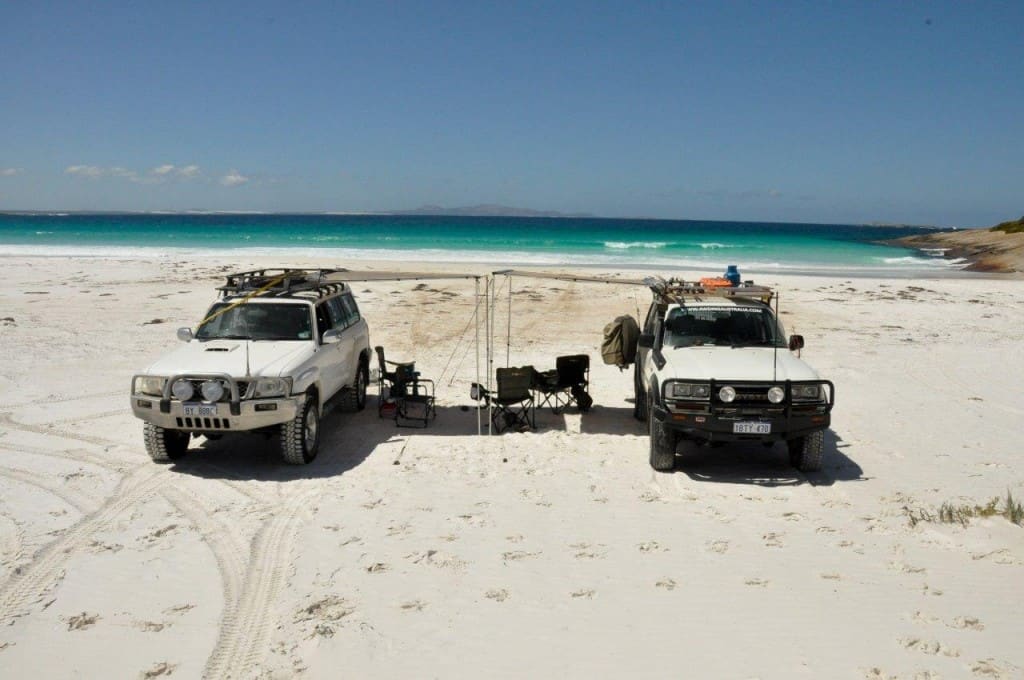 The Duke of Orleans Caravan Park is like a little community. Locals live there in permanent caravans, shacks and homes, and the caravan park is a shop as well as a service station.

This is not a 5 star Caravan Park, but it is clean, comfortable and we absolutely loved it.

The beaches around Duke of Orleans were the best we saw in Esperance, but if you don’t have a 4WD your access is limited a fair bit. That’s not to say you can’t get to spectacular beaches with a 2WD though! 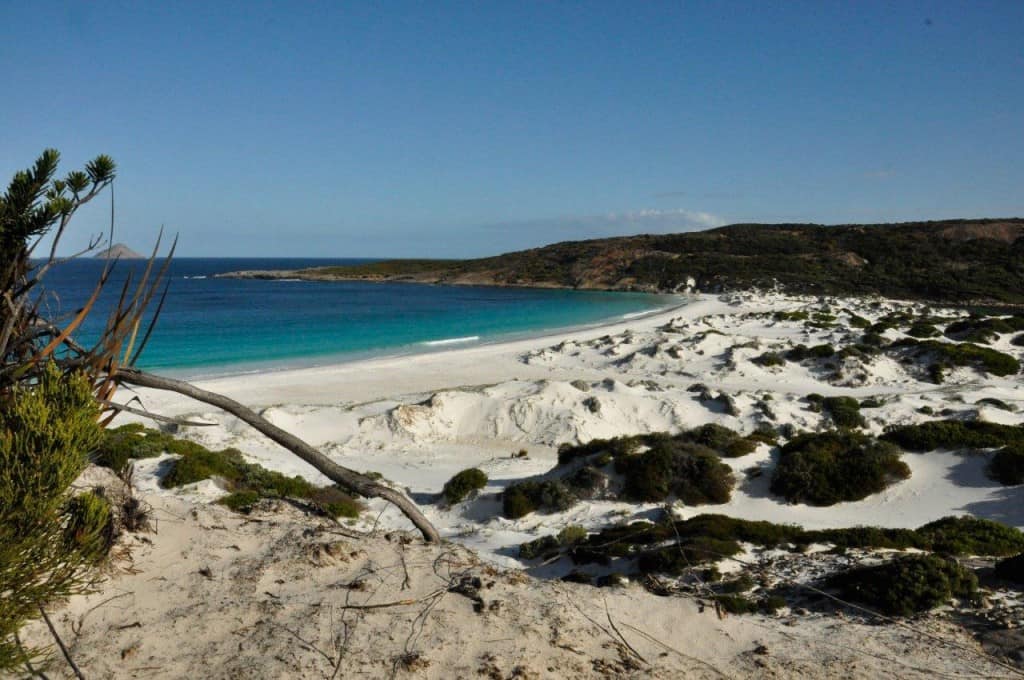 A completely private beach, which we loved much more than Lucky Bay 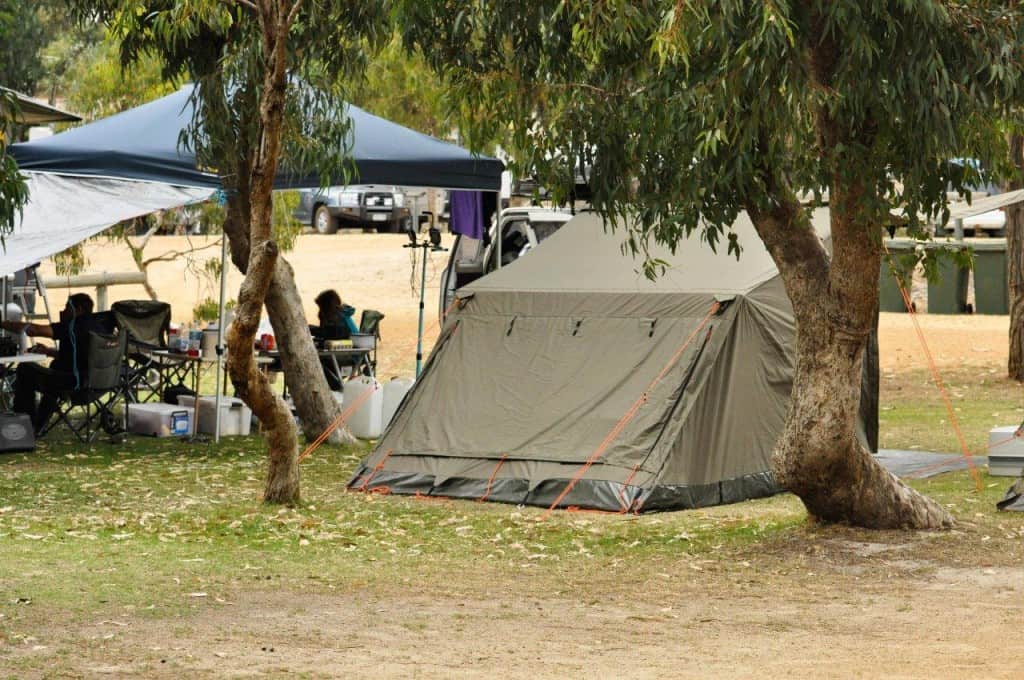 Our camp site at Duke of Orleans Caravan Park

I hope I haven’t been too critical of Lucky Bay. It is truly an amazing place, but it was such a let down for us, having come from some truly amazing beaches further east. What do you think of Lucky Bay? Am I being too critical?