They are both beautiful places to visit, but this post refers to Lucky Bay near Kalbarri. I have visited Lucky Bay a number of times, and each time I have a lot of fun.

This camp ground is now officially run by the Department of Parks and Wildlife, and has a main camp ground set back from the beach with basic amenities, or you can go further towards the water and camp where you like, as long as you are set up for off grid camping. 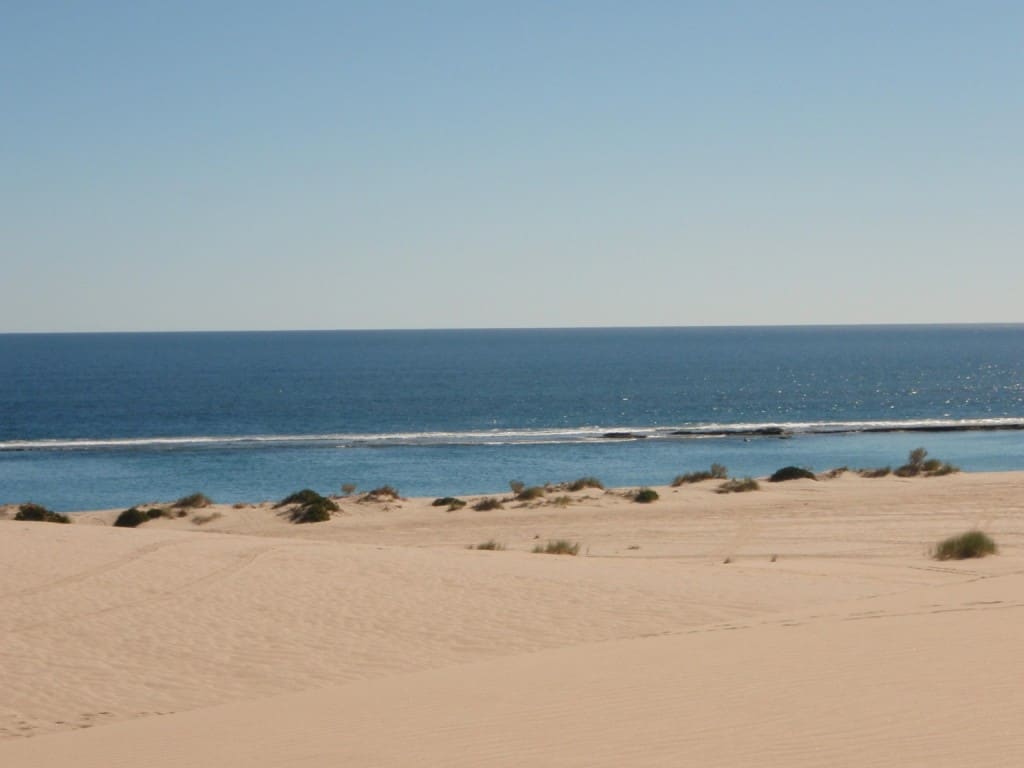 Lucky Bay from the dunes

Accommodation is camping only (including your Camper Trailer or Caravan), unless you stay at the Wagoe Chalets. You also need a four wheel drive to get to Lucky Bay. The bay has a reef that runs parallel with the beach out about 50 metres, and it blocks most of the swell that comes in. The result is a bay that is flat calm, with some great fishing, snorkelling and surfing (the waves are further south).

How do I get to Lucky Bay?

Lucky Bay is located in between Port Gregory and Wagoe (and Kalbarri). To get to Lucky Bay, you just drive up the normal road to Kalbarri. The entrance to the track is about 10 kilometres north of Port Gregory. The track is on the left (obviously!) and you follow the track for a reasonable distance. There are a number of shacks at Half Way bay which will stand out. From there, you take the track that continues on to Lucky Bay.

It’s almost impossible to miss; a huge reef that runs along with a brilliant coloured bay. There are some massive dunes at Lucky Bay, so be careful where you drive! The track before the shacks can often be flooded in winter; check the depth before you cross. Also, the track after you pass through the shacks can be tight, and scratches on your car are common.

As mentioned above, having a four wheel drive is vital. If you don’t have one, then basically you can’t camp at Lucky Bay. The sand is very soft, and you will need the extra traction. For those cars that have little clearance and lack low range, you might want to give it a miss too, unless you are confident. 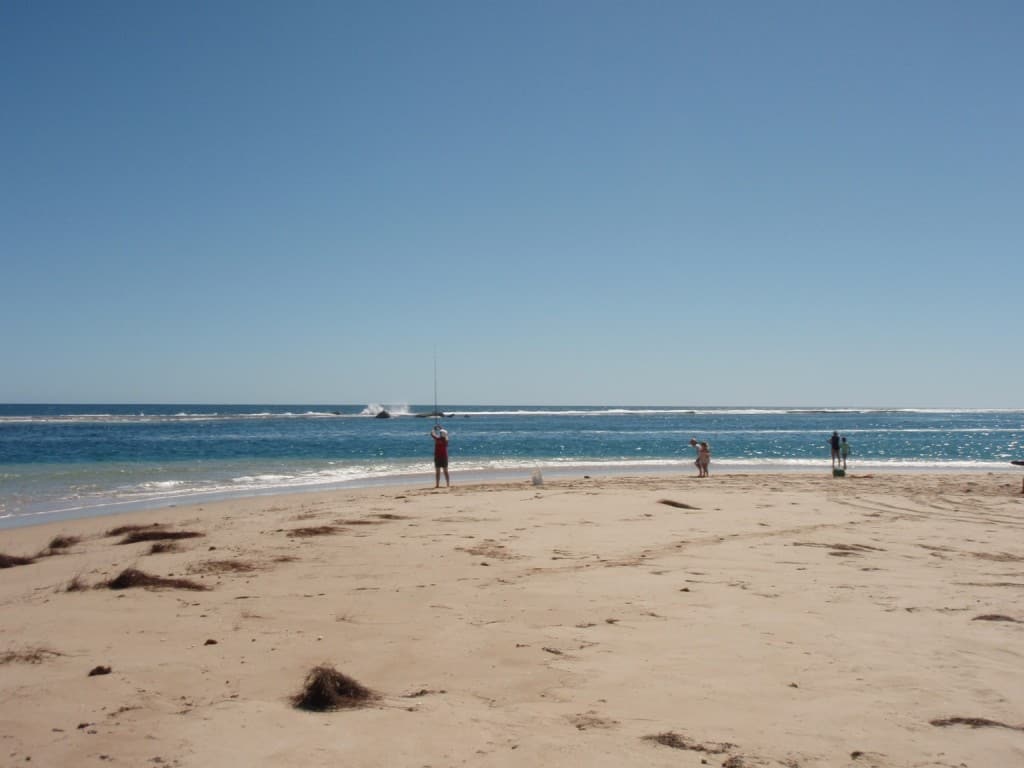 You will need to run your tyres at around 15PSI, but there are areas where you may need to go much lower at times. A number of people tow camper trailers and boats into Lucky Bay, but you wouldn’t want anything too big, unless the sand is hard and you are very confident. Most of the boats that you see are smaller than 18 foot, and I have yet to see a huge caravan there!

To be honest, you don’t really need a boat at Lucky Bay. You can fish off the back of the reef, and you can easily get a good feed. In saying this, boats are popular (especially little dinghies). Launching is easy going as the sand close to the water is hard and the water is flat calm.

Many people just drag their boats up for the night, but do what you are comfortable with. There is some great fishing outside of the reef, and you don’t need a big boat to get there. Be sure to let your tyres down on both the boat trailer and your four wheel drive, or you may find it hard going.

The reef at Lucky Bay really makes the place worth going to. It has some great diving, and plenty of fish to see or catch. Spear fishing is permitted, but you still have strict bag limits and some species of fish cannot be shot. On a calm day you can snorkel around the back of the reef too, but be wary of the currents at the tip of the reef.

There is plenty to see on the protected side of the reef, which is great if the wind and swell has picked up a bit. The water will flow over the reef occasionally, so don’t be too surprised if everything goes white and bubbly for a few seconds when you are swimming in the area! 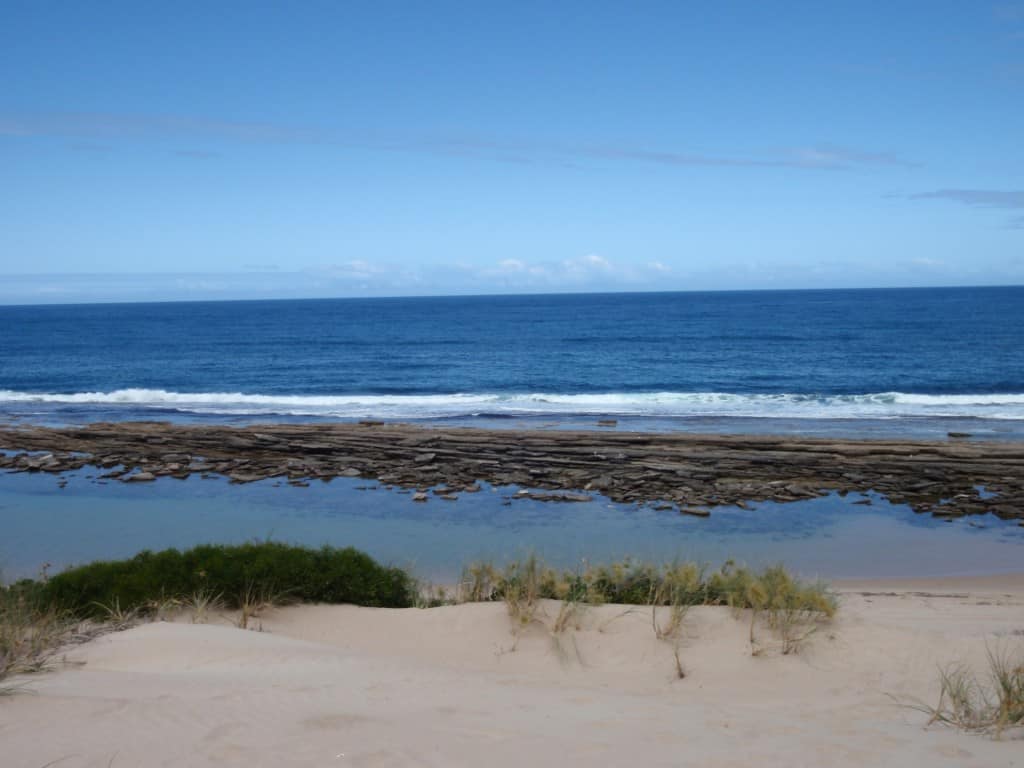 Fishing off the bay often gets a good feed of herring and whiting, especially if you burley up well. For those looking for something a little bigger, you can fish off the beach further north or south, or off the reef. If the water comes over the reef more than a tiny amount it can be dangerous, so pay attention to the swell and what the weather is doing. 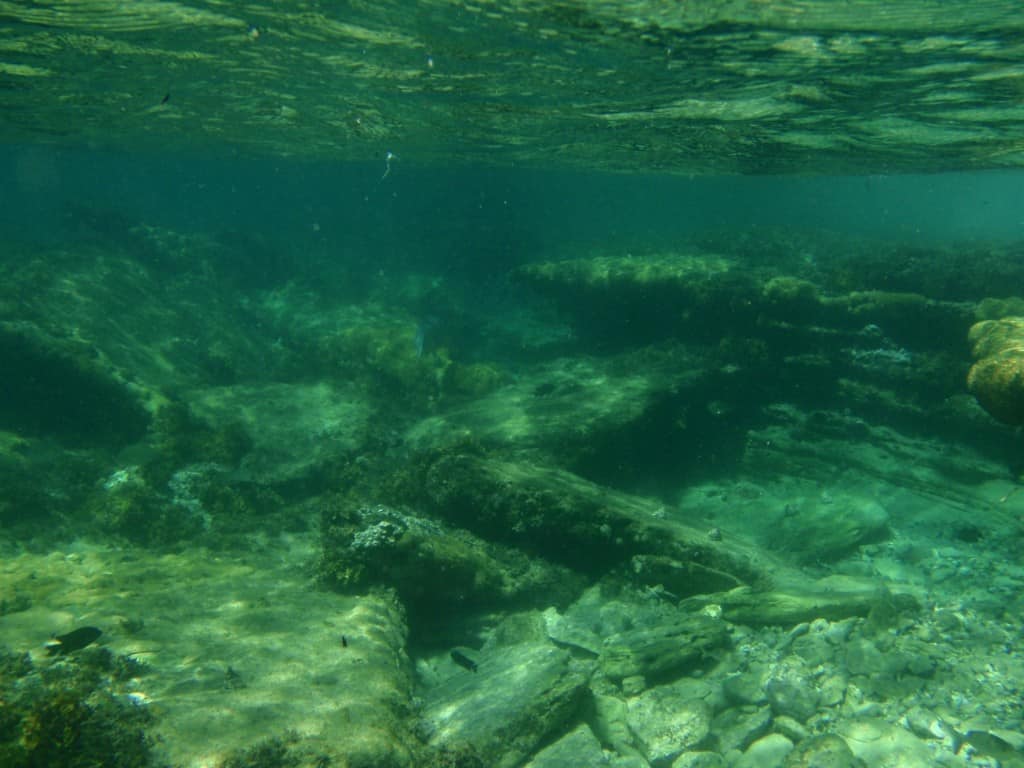 Snorkelling on the reef

We have caught some nice mulloway off the beach, and there are plenty of sharks, dart, tailor, garfish, parrot fish and other species. There is always a good place to go fishing at Lucky Bay; the beach heading north to Wagoe has some brilliant locations. Also, the tip of the reef had a lot of fish swimming around that you could catch easily no doubt.

This is something that not a lot of people actually know about. Just south of Lucky Bay there is a break which seems to have some nice waves. There are quite a few people that go to Lucky Bay with surf boards, but you can’t expect waves every day. Just throw a board in and if the swell is up go for it. Otherwise, you can relax, fish, four wheel drive, go for a ride on the motorbikes or go diving.

The dunes behind Lucky Bay

The dunes behind Lucky Bay are some of the biggest that you will see in Western Australia. Four Wheel Drives, motorbikes, buggies and sand boarders are often common in the area. You really want to pick the right line, as some of the dunes have odd shapes and it is easy to get into trouble. 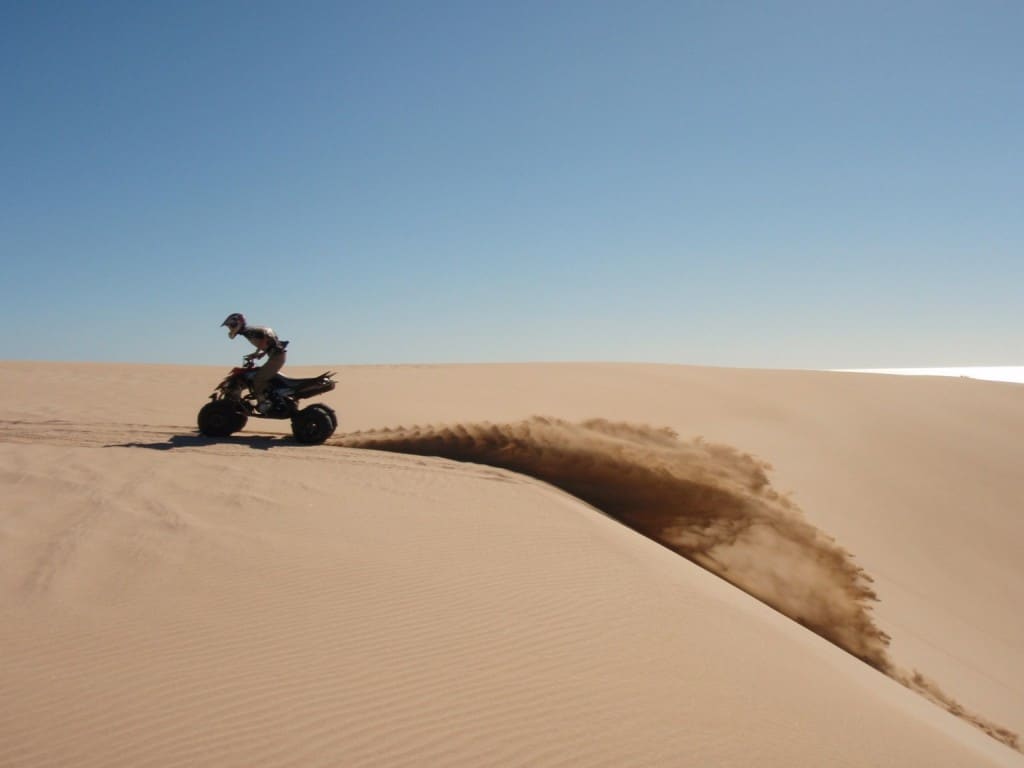 Riding a quad in the dunes

Make sure you throw in a sand board or two, as there is a lot of fun to be had on these monster sand dunes. Motorbike riding at Lucky Bay is permitted. Having a sand flag makes for a much safer trip through the dunes, and this applies for both 4×4 cars and motorbikes.

Wagoe is a few kilometres north of Lucky Bay, and is known mainly for the accommodation on the farm; Wagoe Chalets. The only way onto Wagoe beach is through the property, or through Lucky Bay. To get access onto the beach through Wagoe, you need to stay at the farm. 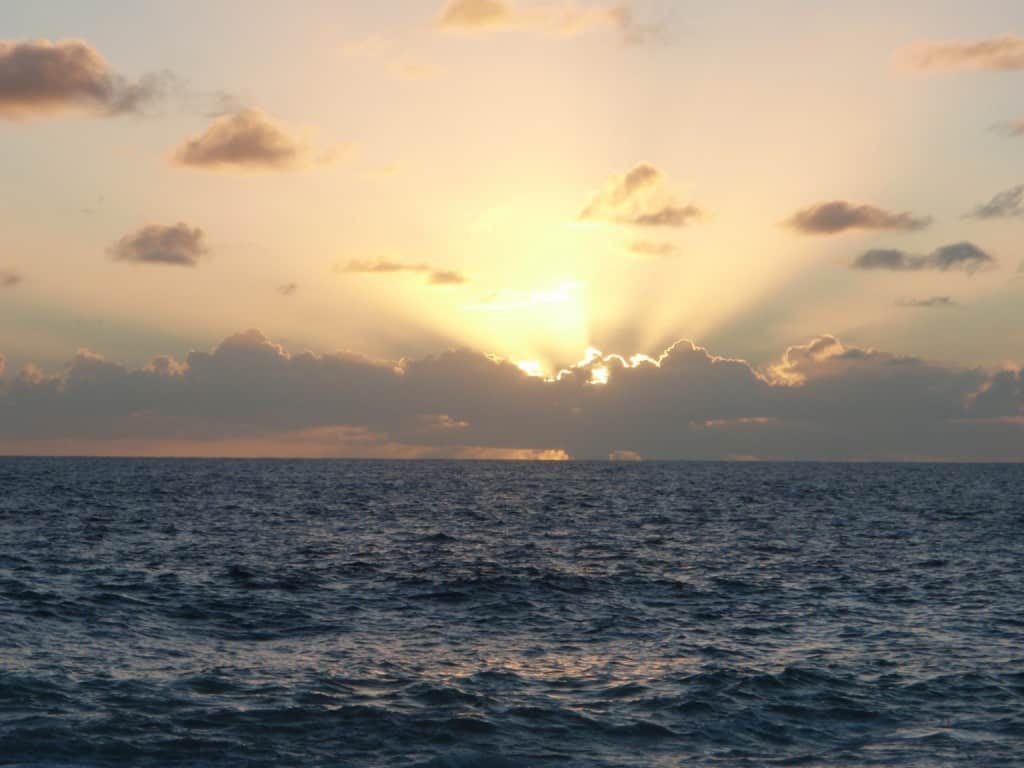 The sunsets are amazing in this area

The prices for camping and the homes are very cheap, especially if you go with a large number of people. The houses are fairly old, but they are comfortable and prove to be a great place to stay. You have private access to the beach, a great view and very friendly hosts.

What do I need to take to Lucky Bay?

You need to take your own water for cooking and drinking, firewood, a toilet and supplies (if away from the main camp), food, camping gear, plenty of fuel, a compressor to pump tyres back up, first aid kits, fishing rods, surf boards, snorkelling gear and anything else that you might want.

We have found that an inverter works miracles (plugs into the cigarette lighter and can power 240v lighting for a few hours easily). 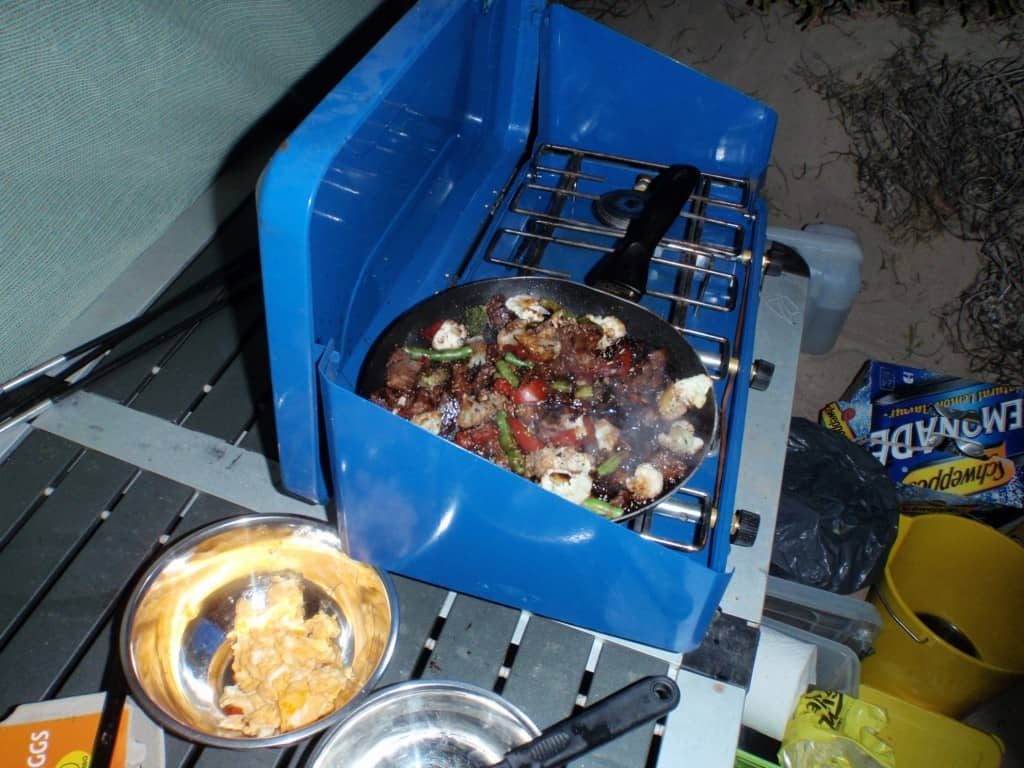 Also, having a fridge in your car is helpful if you are staying for a while. You really need to be self sufficient, as there are not always a heap of people staying there, and driving out to Kalbarri or Port Gregory is a pain. A tyre deflator is a good idea, as it makes deflating your tyres quick and easy. I have a Ferret tyre deflator, but the ARB Ezy deflator is well worth the money.

If you are visiting Lucky Bay, you need to take your own toilet with you, or use the ones at the main camp ground.

Where is the best place to camp?

Depending on the weather, most people will camp behind something that offers a bit of protection. The wind can be an issue when it is blowing off the ocean, so setting up behind the first dune can be a great source of protection. It also gives you a bit more privacy.

There are no restrictions on where you can camp, so just find somewhere that is protected and private and set up. 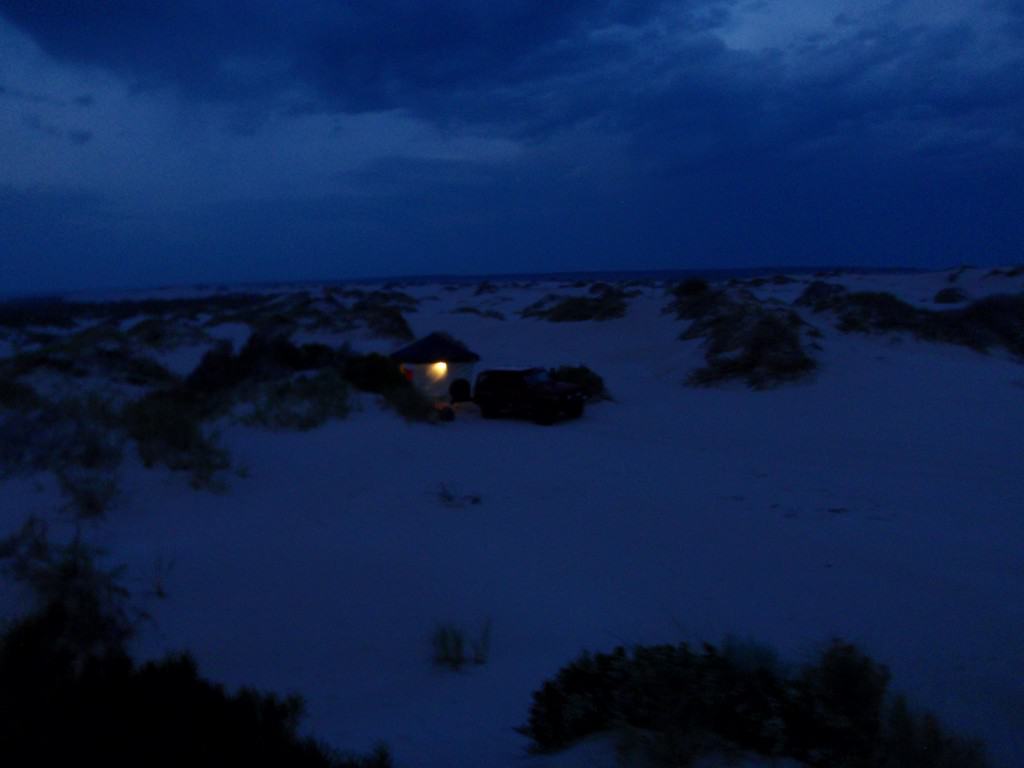 Camping behind the dunes

Of course, don’t camp on dunes or on the car tracks! There is no charge for camping at Lucky Bay, which makes it a great holiday for a family on a budget. Make sure you double check that you have everything you need before you leave! Camping can be terrible if you forget important items!

What to do with rubbish

Just near the shacks (that you drive past on the way in) there is a place for you to dump rubbish. Please ensure that all of your rubbish is taken away, and that the area is left clean. We have seen Hill River and Wedge Island closed for camping, and I would hate to give them a reason to close Lucky Bay.

You are allowed dogs at Lucky Bay, but be sure to keep them under control. We found that the people at the bay were friendly and didn’t mind dogs running around freely, but keep an eye on them! It’s best if they are tied up at night, or when you are not able to look after them. 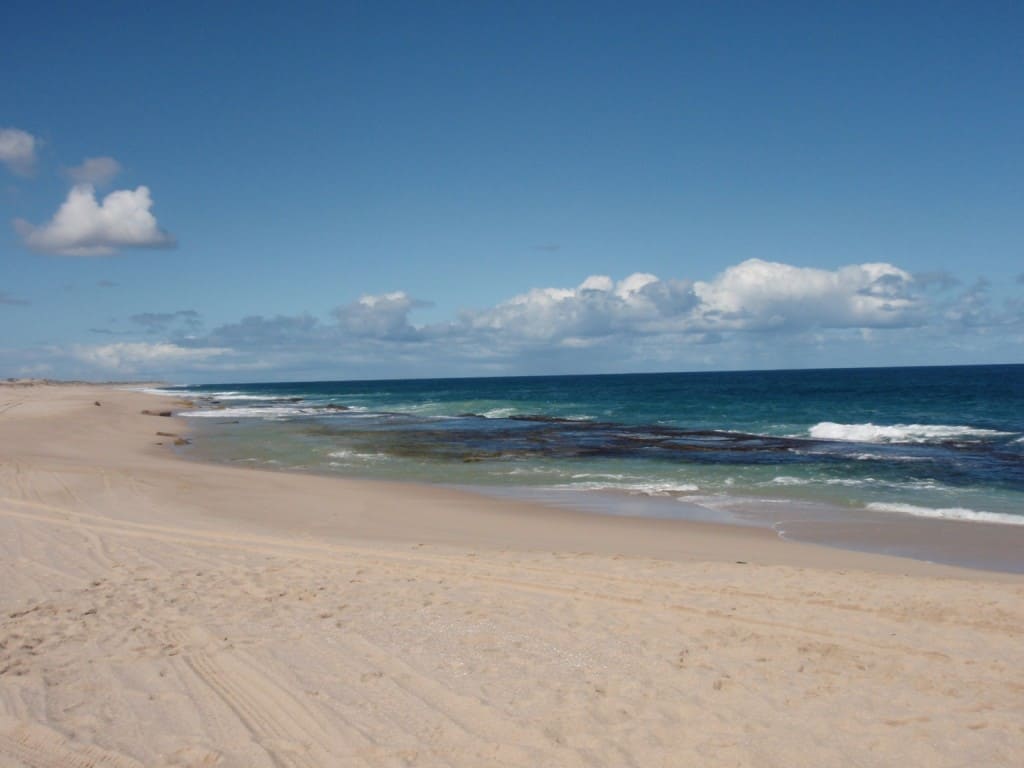 The beach north of Lucky Bay

If you are looking for somewhere to camp that is quiet, relaxing and cheap to visit, then Lucky Bay near Wagoe is for you. It isn’t much more than 5 hours drive, but there is a lot to keep you occupied. Places like these are not very well known, but they are so worth telling people about.