We bought a Darche Eclipse Awning

After spending more time looking at different awnings on the market than I care to admit, we’ve purchased a Darche Eclipse Versatile awning, which we’ve mounted to the back of our Isuzu Dmax Canopy.

In this post, I share why we’ve gone down the path of the Darche, what other 180 and 270 degree awnings we looked at, and our first thoughts on the new awning. 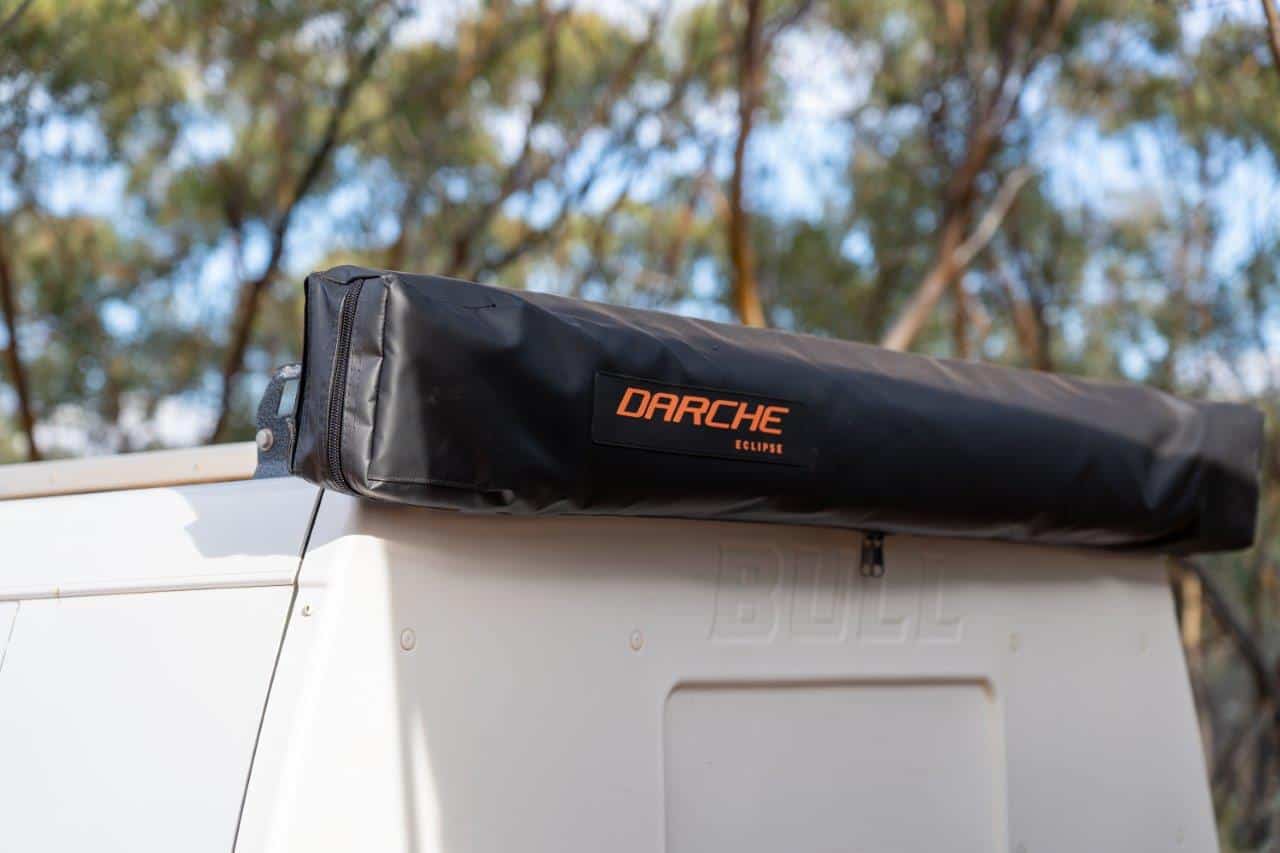 Our new Darche 180 degree awning, mounted to the rear of the Dmax

To start off with, we’ve been living on shade from our Camper Trailer, its rope edge awning or from the gull wing canopy on our Dmax, and we’ve been pushing the friendship for some time. I recall pulling into Coronation Beach camp ground at about 1PM in the afternoon on a 42 degree day, and within about 5 minutes of being out of the car feeling like we were turning into cooked crayfish.

With a lap of Australia on the cards, we needed more shade; there’s nothing worse than getting burnt, and even if you avoid that, you end up feeling absolutely shattered. The sun isn’t overly forgiving in Australia!

One of our temporary shade ideas in use at Moore River

We needed something fast and easy to setup

Our camper trailer has decent shade once you set the awning up, but its at least a 10 minute process to get the awning up, and when we leave the camper for a day trip we still have no shade. Fortunately, most awnings on the market today are very quick to setup, and they are getting easier and easier.

The old side awnings that you pull out and swing poles around and hope no breeze comes mid way are starting to become less and less common, and when you see how easy many of the newer styles of awnings are to set up its easy to understand why. 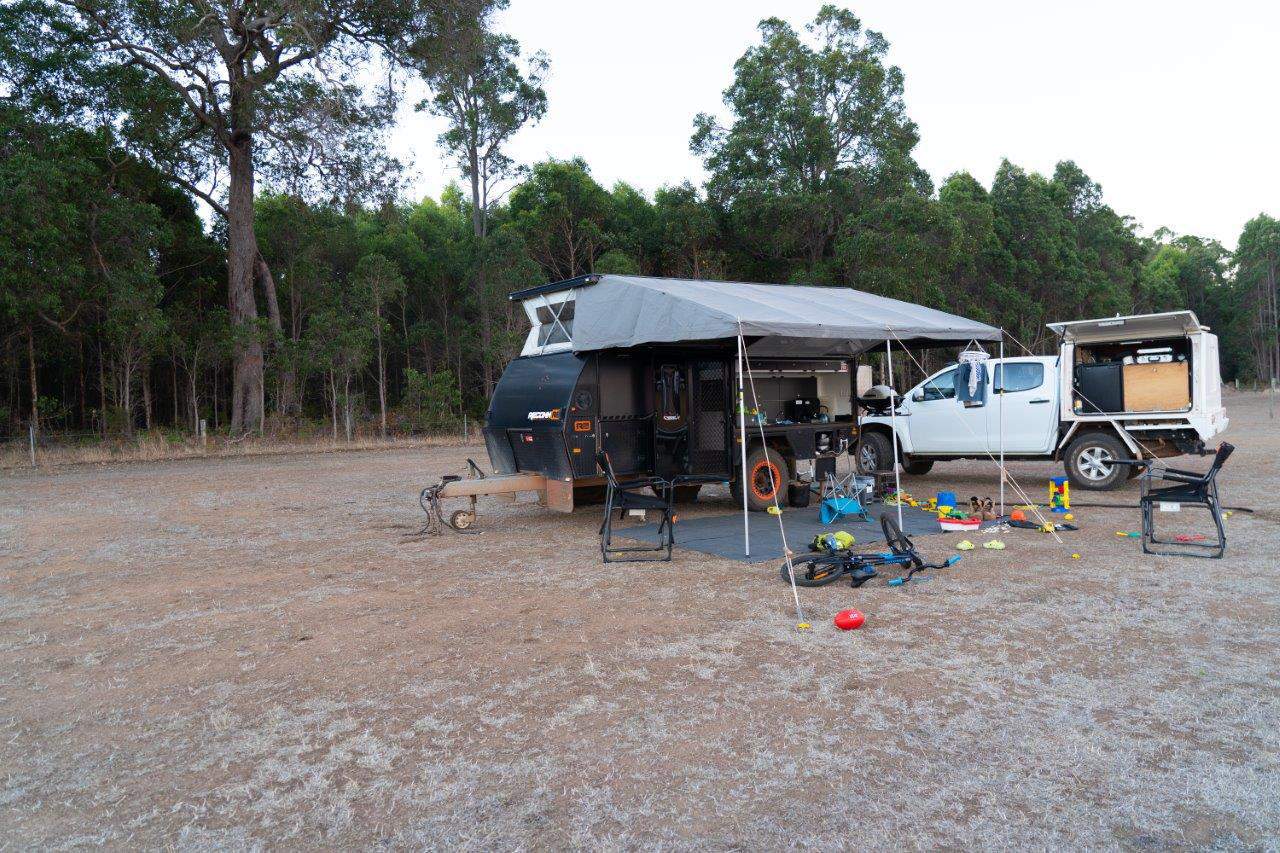 Our existing camper trailer awning is not fast, or easy to use

What awnings did we look at?

Trying to find something to suit our limitations

This is where things get a bit personal, and why we didn’t take the conventional path of buying a 270 degree awning.

To start off with, the passenger side of our vehicle weighs about 150kg more than the drivers side. Even with replacing our AGM with a Lithium Battery its still going to be significantly heavier, and that isn’t going to change. We have our fridge, long range tank, larger starter battery, kitchen and drawer storage on that side, and its inherently always going to be heavier.

That means if we installed a 23 – 30kg awning on the same side, its going to be even worse and I wasn’t prepared to do that. I also didn’t want to add another 23 – 30kg period; we are heavy enough as it is.

From there, our canopy is quite tall compared to many, and mounting an awning on top for it to clear the doors would result in the awning bag sitting way up in the sky. This means it wouldn’t fit in the garage, the usable shade is hugely reduced and we’d probably take it out on a tree branch in the future.

Why the Darche Eclipse Versatile awning?

It fits on the back of our Canopy

As far as I could find, the Darche Eclipse Versatile is the only 180 degree awning on the market that is under 1600mm wide, which means it can be mounted on the side of small vehicles, or on the back of most wagons and Utes without it sticking out. 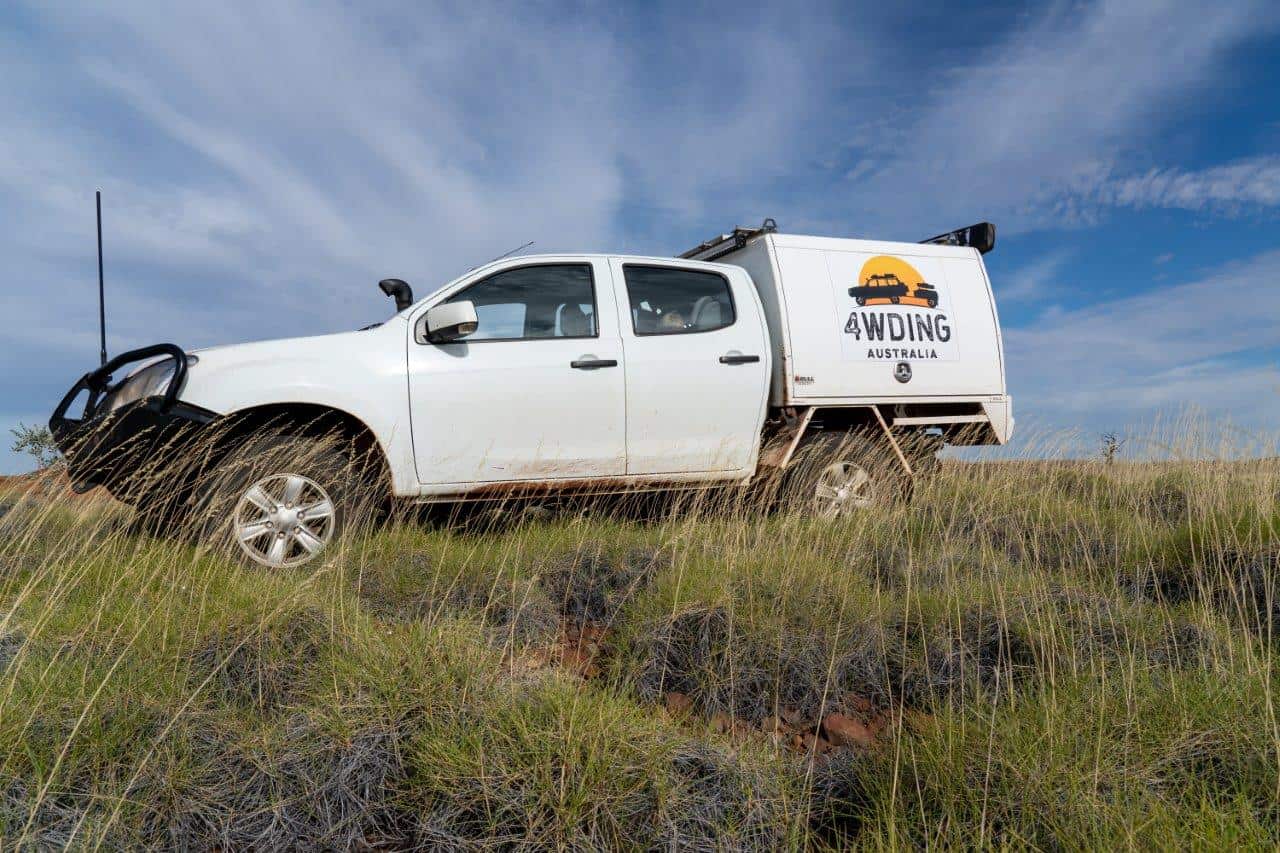 It fits quite well on the back of the vehicle

Most 180 and 270 degree awnings start off at about $1200, and work their way up to near on $3000. For $600, its pretty awesome value. I’m not against spending money when its needed, but with all the other downsides of a traditional 270 degree awning I couldn’t justify the extra money.

Its fast to setup

You don’t have to look too hard to realise these are super easy and fast to setup, and most importantly can easily be done with one person even if its windy. 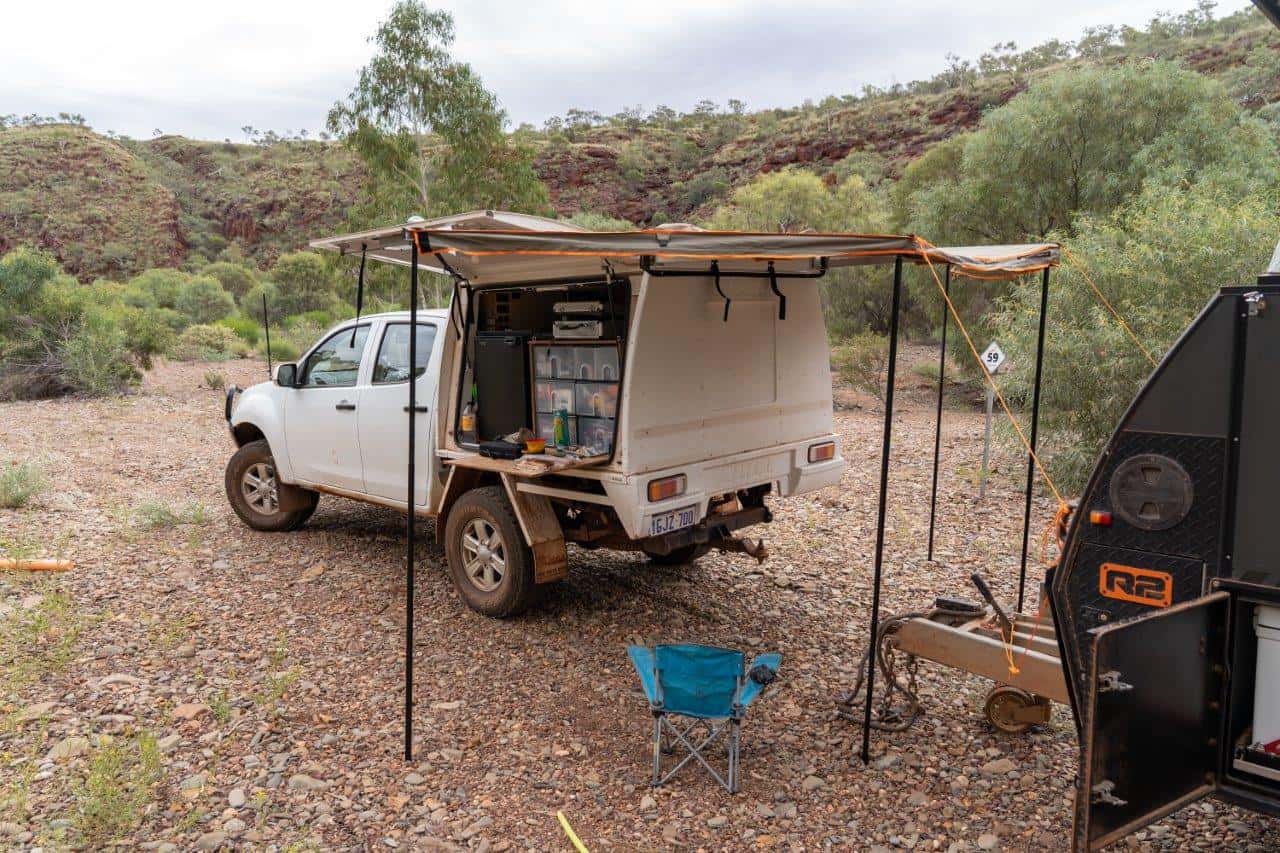 These are pretty quick and easy to set up

It will compliment our existing shade

In theory, we will actually end up with 360 degrees of shade if both canopy doors are up, and although it doesn’t stick out nearly as far as some setups would the doors and new awning should work well together. 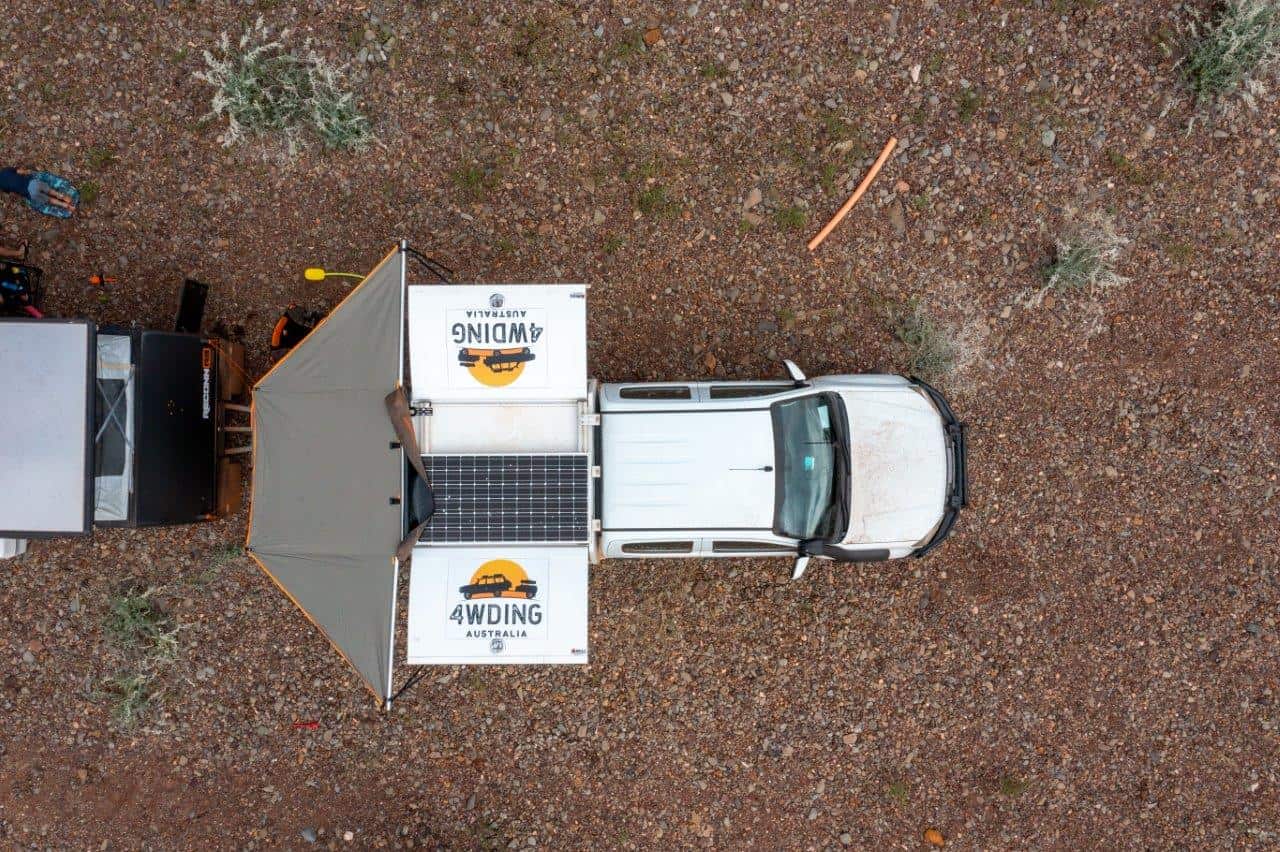 With the gull wings up we have 270 degrees of coverage anyway, with tiny little gaps between

For us, balancing the weight evenly was important, and given its only 13kg and spread evenly left to right its a winner. Yes, its right at the back of the canopy (which I don’t like), but its probably the lesser evil!

It should still fit in our garage

I’m quietly hoping that I’ll be able to mount this in a way that allows us to still keep the vehicle in the garage. It’s incredibly tight at the moment, and there’s a chance this will push it over the edge, but it might just work!

EDIT: You are dreaming son. It doesn’t even come close to fitting, which is a bit of a pain. It won’t matter for our lap of Australia and as Bull Motor Bodies run unistrut I can leave the spring loaded nuts in place, and hopefully it will just be a case of lifting it up and down, and doing up/undoing 4 bolts each time. Not ideal, but what do you do.

I do take comfort in the fact that even one mounted down the side wouldn’t fit either; our Dmax just squeezes into the garage from multiple dimensions.

What are our concerns with the Darche Eclipse?

Will there be enough shade?

With the Darche Eclipse only being 1500mm wide, when you swing it out, its maximum width is also about that, compared to many that are 2100 – 2300mm wide. That makes a huge difference in the amount shaded. We end up with 4m2 in total, but its in a trapezoid shape and not as nice as some of the bigger awnings. 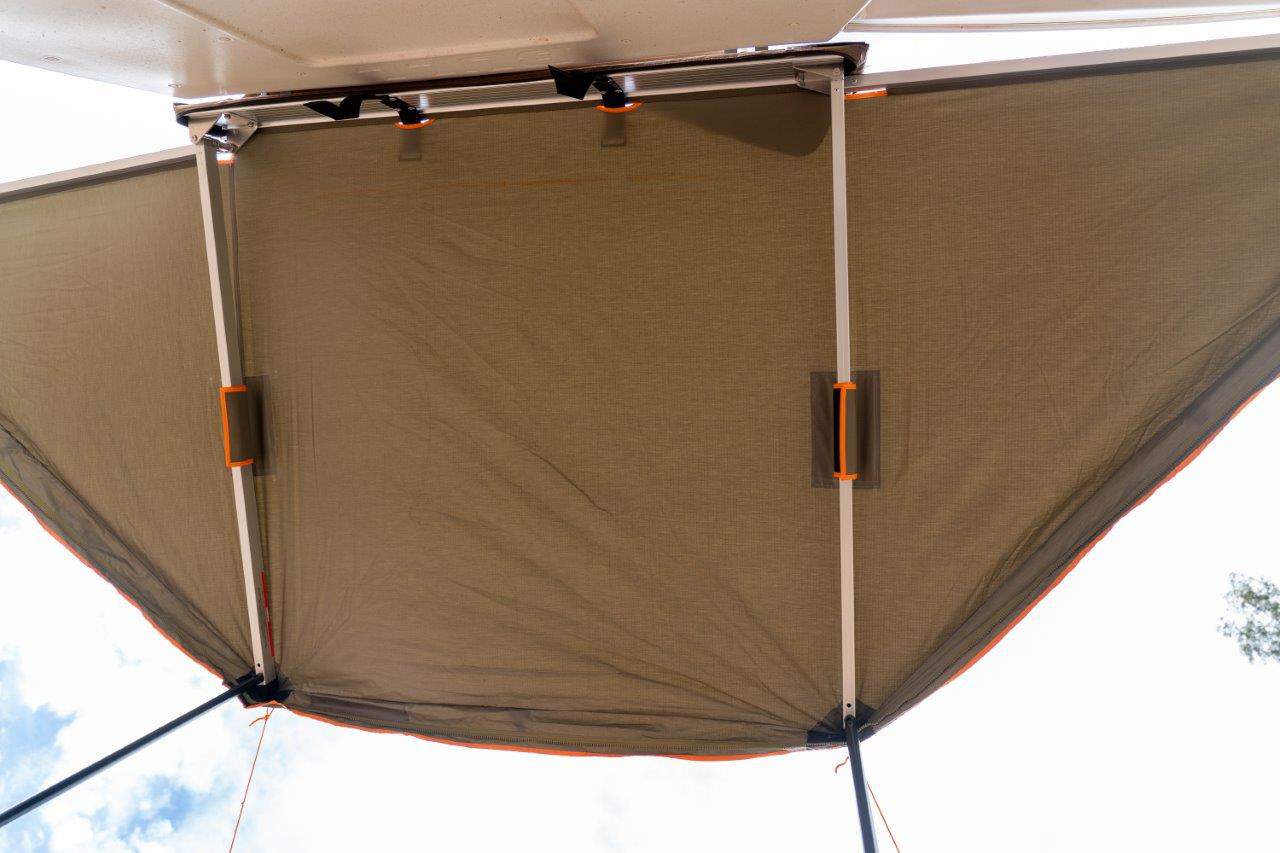 Looking up at the shade provided

Will the awning doors interfere with the tensioning straps too much?

When you set the Darche awning up, you have two tensioning straps that need to go back to the roof racks to keep the awning out straight. I can see these are going to hit the canopy door, so we’ll have to come up with an innovative solution.

EDIT – this is not a problem at all, and can be easily set up with the doors up or down. It just means if you do want to open the door you need to undo the strap and then do it up again, attaching to the door itself.

Is it good enough quality?

Our initial thoughts are this; it seems fairly well built, and the only thing I can fault is that there’s a heap of sewing offcuts that were left in the finished product. When I first saw them I thought they were pulls that had started coming apart, but its literally just bits that have obviously been cut off, and not removed; they just shut it all up and send it out. Not a big deal, but certainly not as professional as it could be. 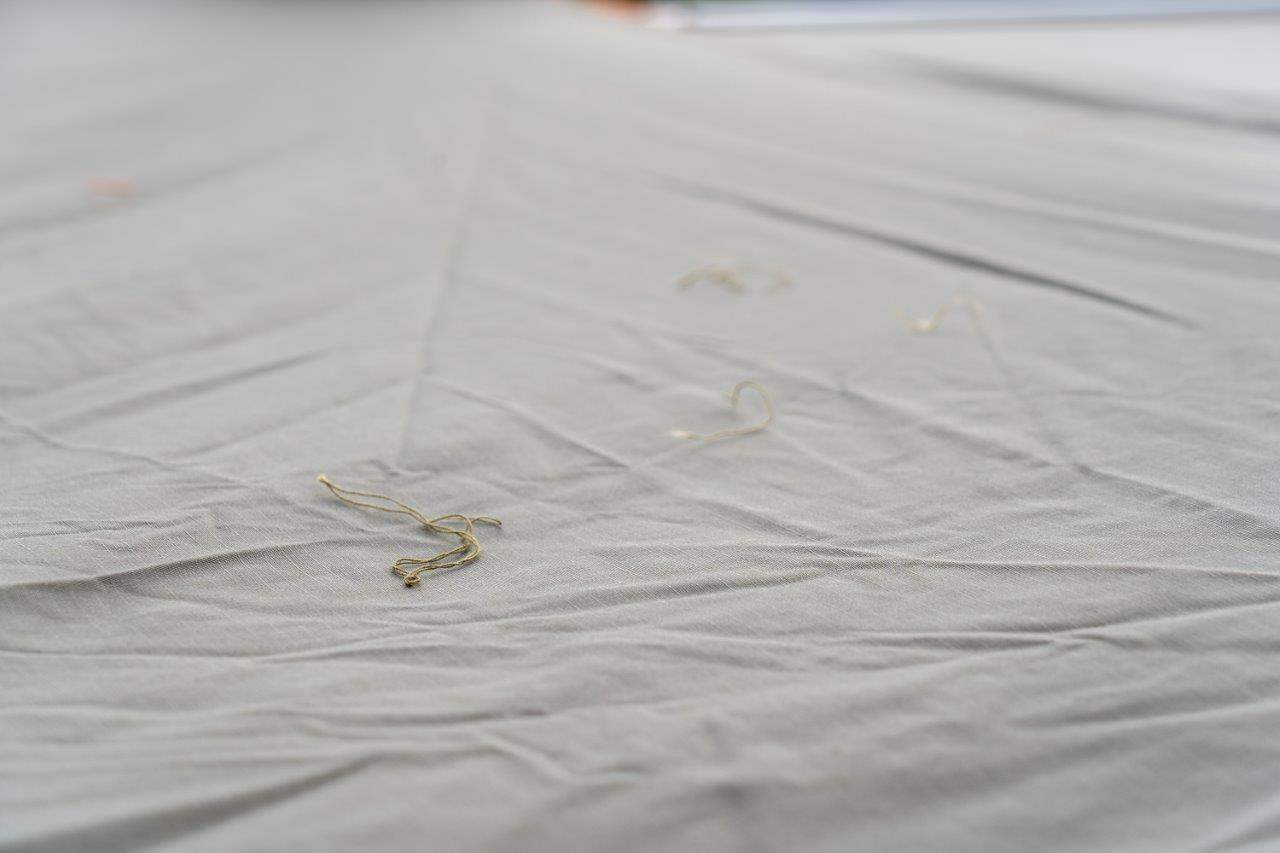 We found a heap of threads left in the awning 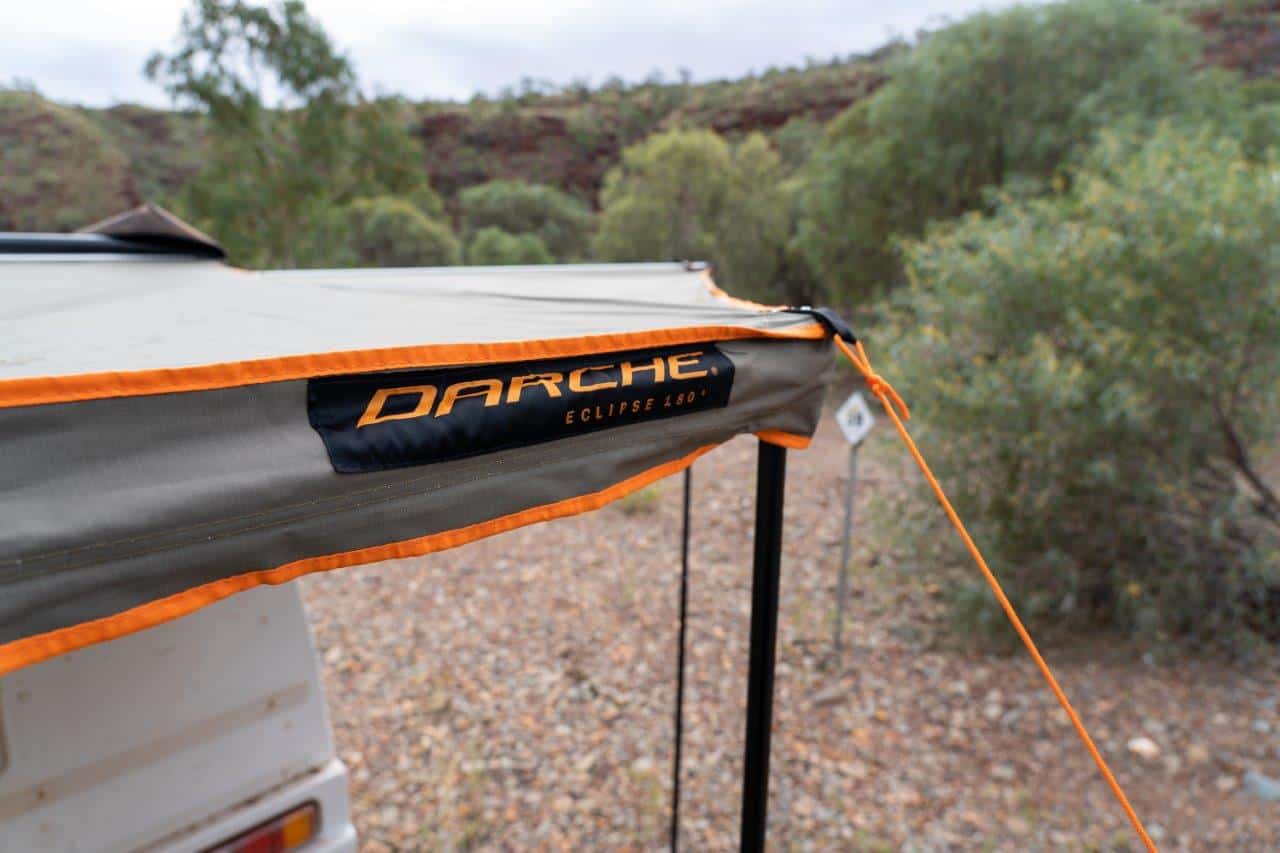 They look reasonably well made 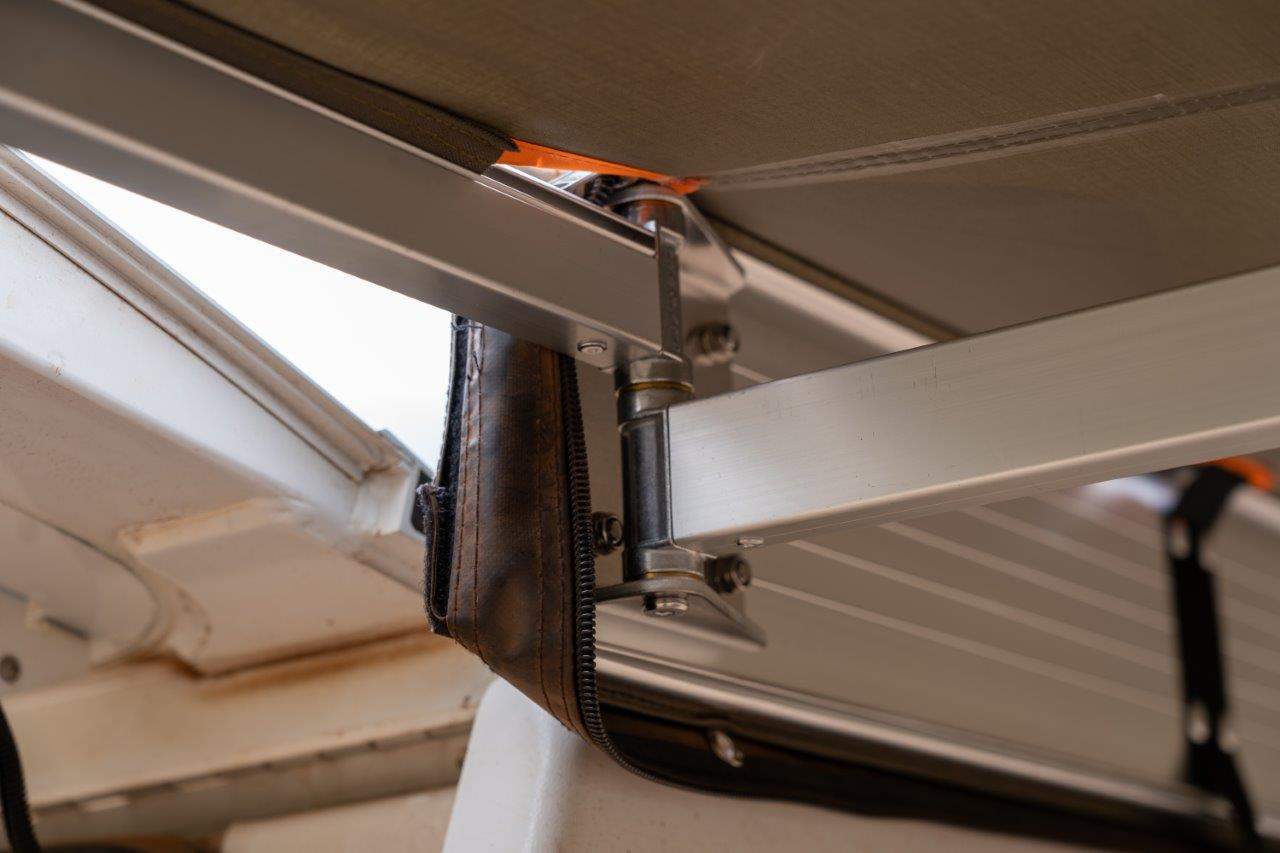 I’ve seen these snap before, but we’ll see how they go

One thing I didn’t think too much about before making the purchase was the fact that the awning is now the highest part of the vehicle, and because it runs from one side to the other it is essentially a big wind break. I don’t know how much difference this actually makes, but I reckon its got to hurt the fuel economy a fair amount.

The awning sticks up well above the camper too, so its not like the air is going to get disrupted again anyway. 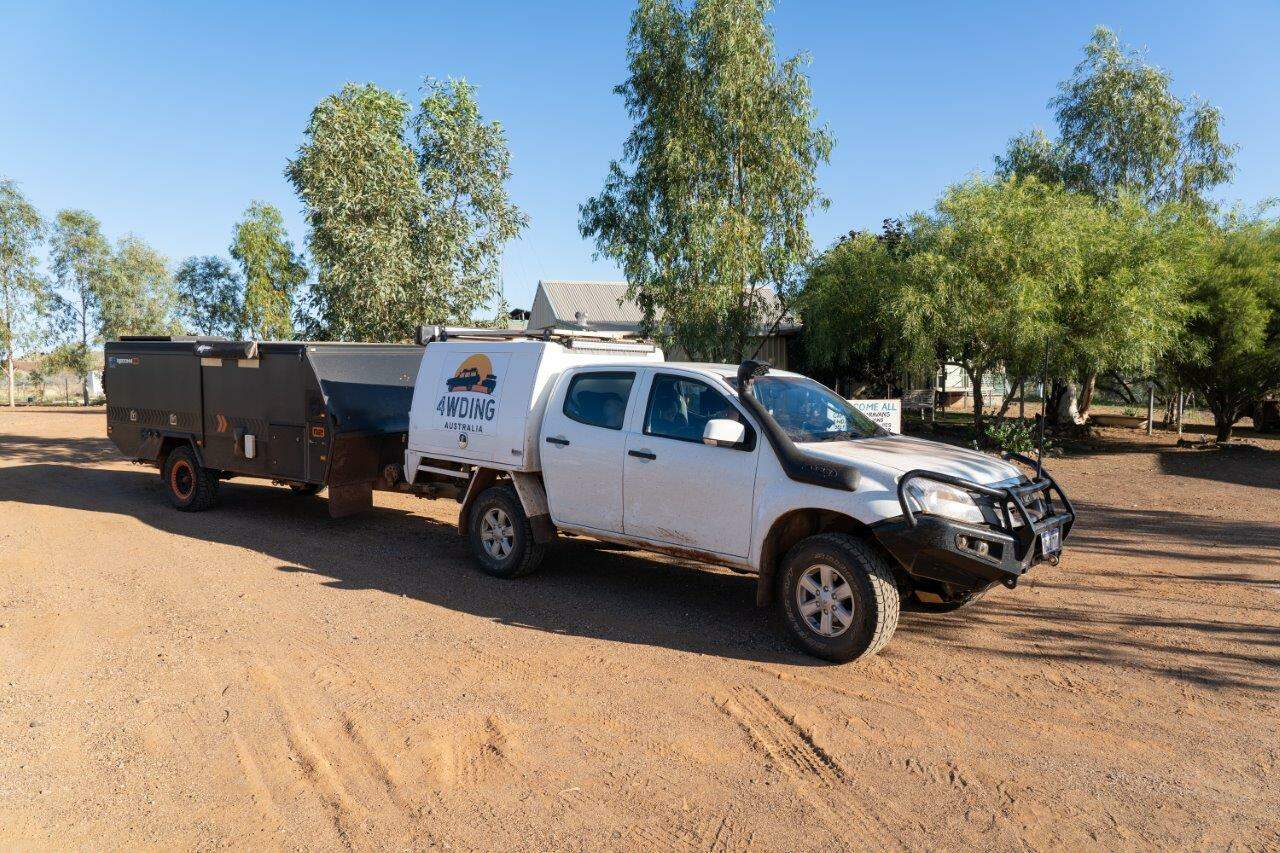 You can’t set it up with the camper hooked up

When we purchased the Darche awning, I was hoping that we’d be able to use it hooked up to the camper. I think we might be able to do it with a bit of mucking around, but using the poles in their traditional vertical position doesn’t work. 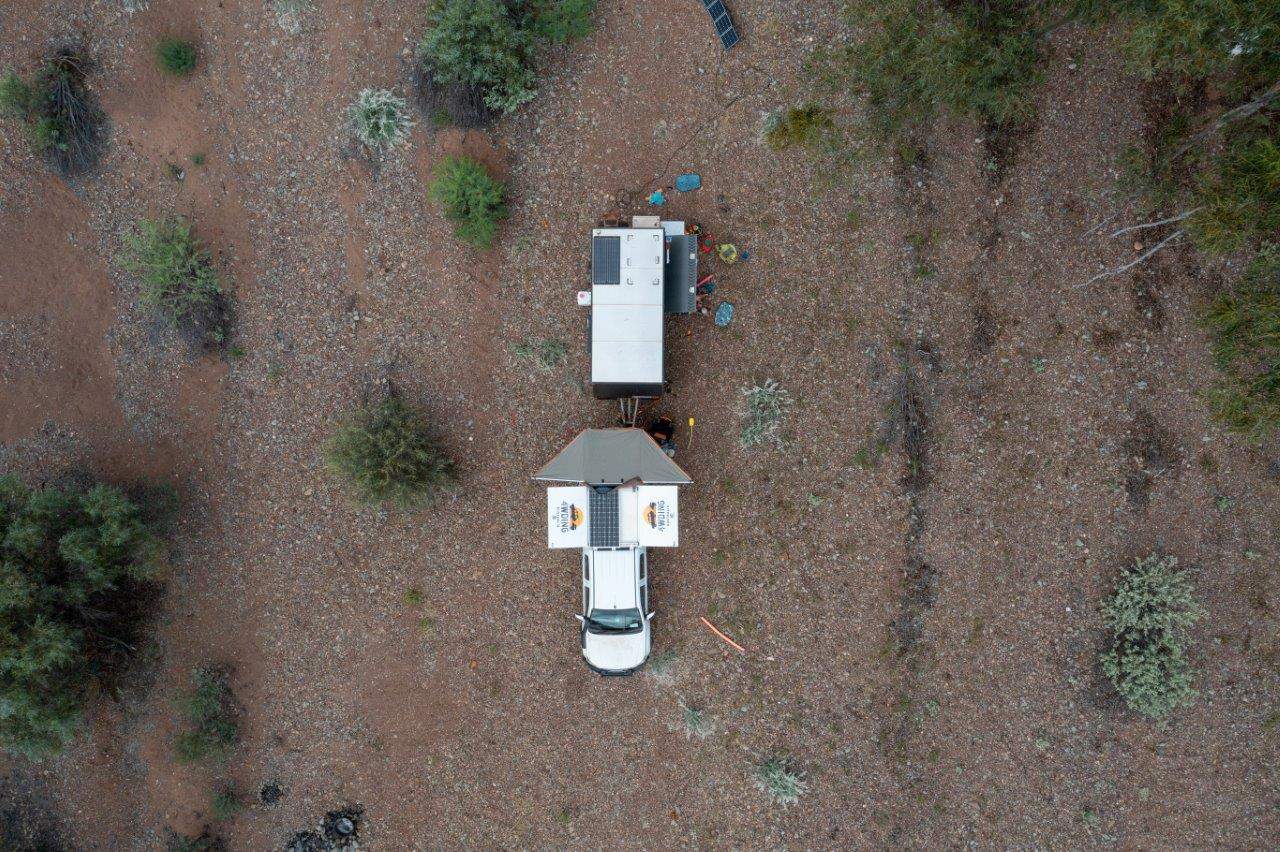 I was quietly hoping this could be set up with the camper still attached, but you can’t

Are we actually going to use it enough?

On our 3 week trip up north, I pulled our awning out a grand total of, wait for it, once. To make it even worse, I only set it up to have a good look at it, and not because we actually wanted the shade. I had a gut feeling that we’d rather find other shade than set it up, and I was right.

The sun was quite low in the sky on this trip, which meant we had great shade from the camper just facing East West, and from the canopy doors. However, when its summer and the sun is almost vertical, it will be a different ball game, and I’m sure we’ll use it on the beach. Time will tell!

Have we made a mistake? What do you reckon? Is there a reason people don’t set up rear fold out awnings?