Fitting an aftermarket transmission cooler; why its important

When we upgraded from our 80 Series Land Cruiser to an Isuzu Dmax, one of the requirements was it had to be an automatic. Being our first automatic 4WD, there was some learning to be had, and we fitted an aftermarket transmission cooler not too long ago to cope with the extra heat. This was all part of caring for an automatic transmission.

Having owned the Dmax now for nearly 5 years, I can tell you I’d never go back to a manual anyway, as they are so much nicer to drive around town, touring and off road.

However, automatic transmissions are a complicated, and expensive beast, and you need to take good care of them or be prepared for an expensive bill when it fails. They can be super reliable if you look after them, or a pain in the backside, both financially and in terms of inconvenience if you don’t. 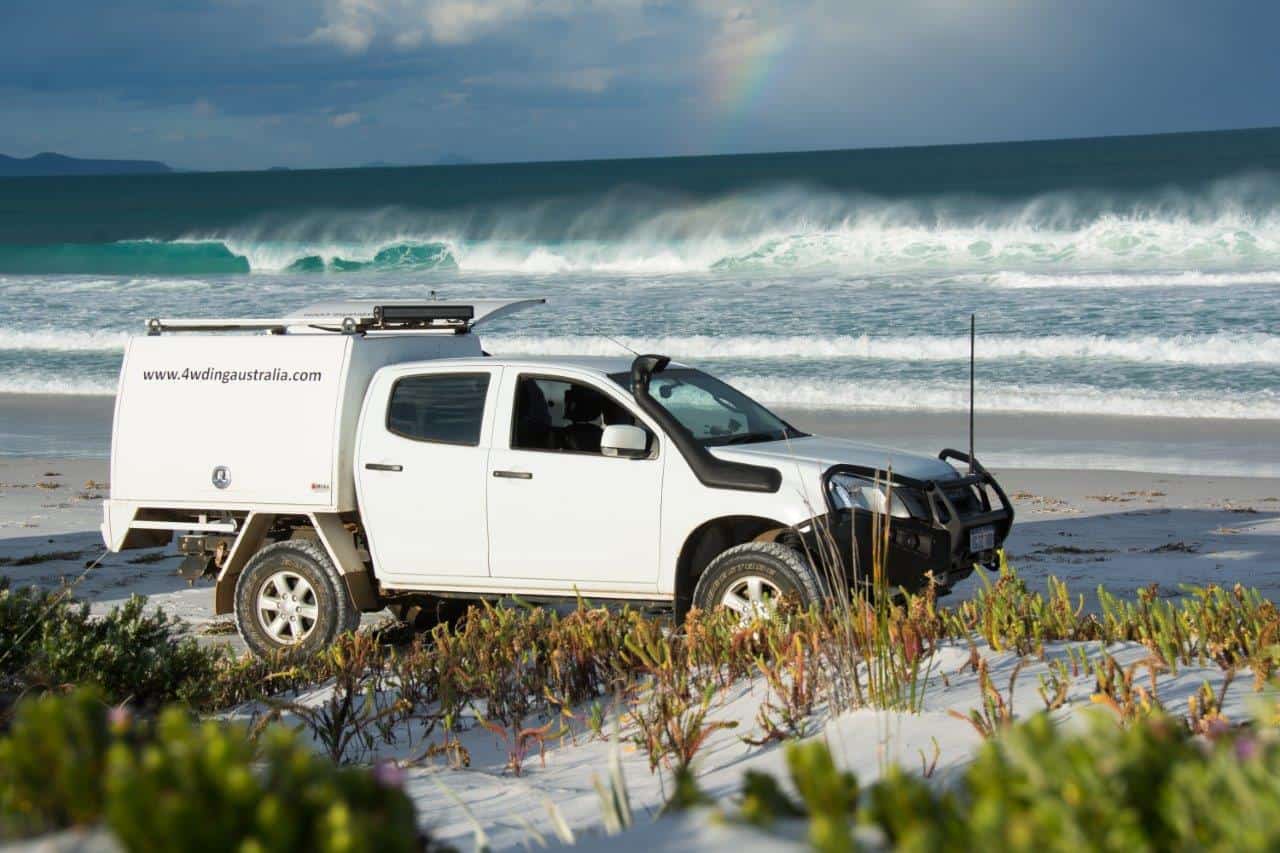 Our Isuzu Dmax on the beach down south

One of the first mods to our Dmax was an Ultra Gauge, which is a permanently mounted screen on our dashboard that reads through the OBD2 port, and displays what the vehicle is doing. The main reason for getting this was to monitor the automatic transmission temperature, as a 4WD that is loaded up with bigger tyres and towing can generate some serious transmission heat.

I’ve had this on since the vehicle was bog stock, and right through the build, towing our soft floor camper trailer and now the Reconn R2 Hybrid. There is an obvious correlation between weight and work, in that the more weight you add, and harder you make it work the temperatures climb. Excess heat is very bad for a transmission.

Our Dmax tows the Reconn R2 around when we are travelling

Initially it was hard to get the temperatures above 90 degrees, but on our 3 months up north loaded up, and towing a 1.5 tonne soft floor camper trailer in high ambient temperatures (30 – 42 degrees every day) and sitting at 100 km/h, the temperature constantly sat between 95 and 102 degrees.

I knew that with a bit of off road work thrown in, or soft beach work, without an external automatic transmission cooler we’d have a fairly significant problem. If you are considering a transmission cooler, get yourself a decent OBD2 reader (Ultra Gauge, Scan Gauge etc) and watch what the temperatures do.

This is entirely dependent on how you use your vehicle, and how it is set up; not everyone will need a cooler.

Nothing beats real time monitoring with an OBD2 reader

After getting back from our 3 month trip, the Dmax had done 40k, and according to Isuzu’s specs it was due for an oil change in the transmission when towing. I was happy to roll with this, and I got one of the dealerships to do the oil change, and to fit a Davies Craig 678/698 cooler.

Davies Craig have a good reputation, but plenty of other manufacturers make good units too, and this was just one that was recommended to me. Is it the best automatic transmission cooler? Probably not, and we go into it further below.

The core size is 213mm tall, and 281mm wide with 21 plates, running a 3/8″ inlet and is good for 13934 BTU an hour. The actual transmission coolers are not expensive at all, and you can buy kits designed for vehicles from PWR, HPD, Davies Craig and several other manufacturers.

Given my time poor situation, I opted for the dealer to install it, with the added benefit of knowing that if anything went wrong I could comfortably take it back in and get it sorted. These are basically just a small radiator, which gives the fluid more surface area to cool, before returning to the transmission. 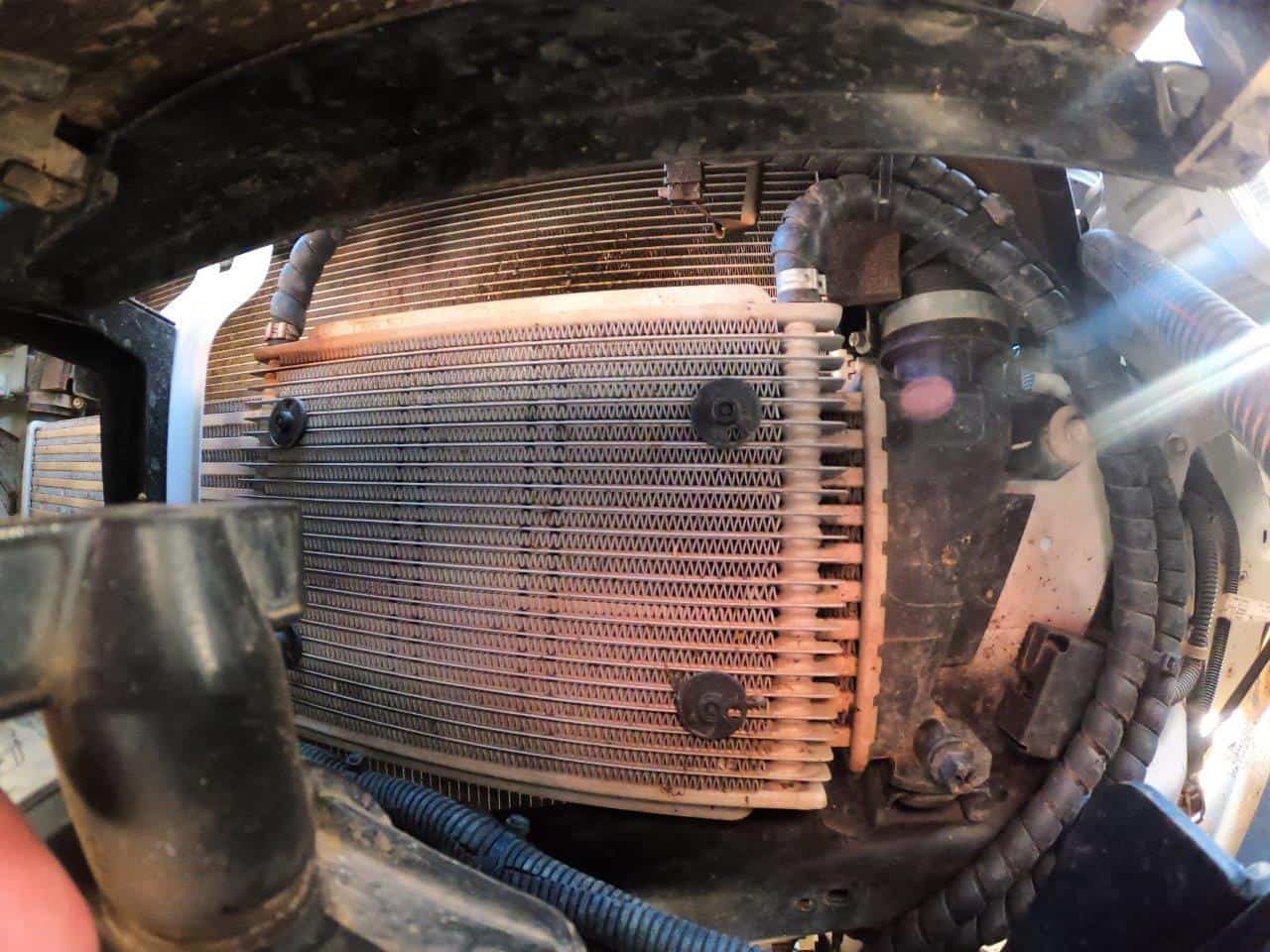 The Davies Craig external transmission cooler in our Dmax

How to plumb the transmission cooler up

When an aftermarket transmission cooler is installed, you can plumb it a number of ways. Before we go into this though, the large majority of 4WD’s are setup so the transmission fluid comes out of the transmission and heads to the radiator, where it is cooled at the bottom, in a separate compartment before going back to the transmission. Some have external coolers, but many do not.

So, how can you plumb an external transmission cooler up?

Blank the OEM cooler off

Some people choose to blank the OEM (original equipment manufacturer) cooler off completely, and just run it through the aftermarket unit. This means that the oil comes out of the transmission, runs through the new cooler, and then returns to the transmission.

Before the OEM cooler

The next option is to plumb the trans cooler prior to the original installation. The hot oil comes out of the transmission, runs through the external cooler and then through the OEM one, before returning to the transmission. This allows the fluid to be warmed up by the radiator, and still maintains some manufacturer control over the fluid temperatures.

In this setup, the transmission cooler takes a huge load off the radiator (and your engine cooling system) as by the time it arrives its cooled significantly. 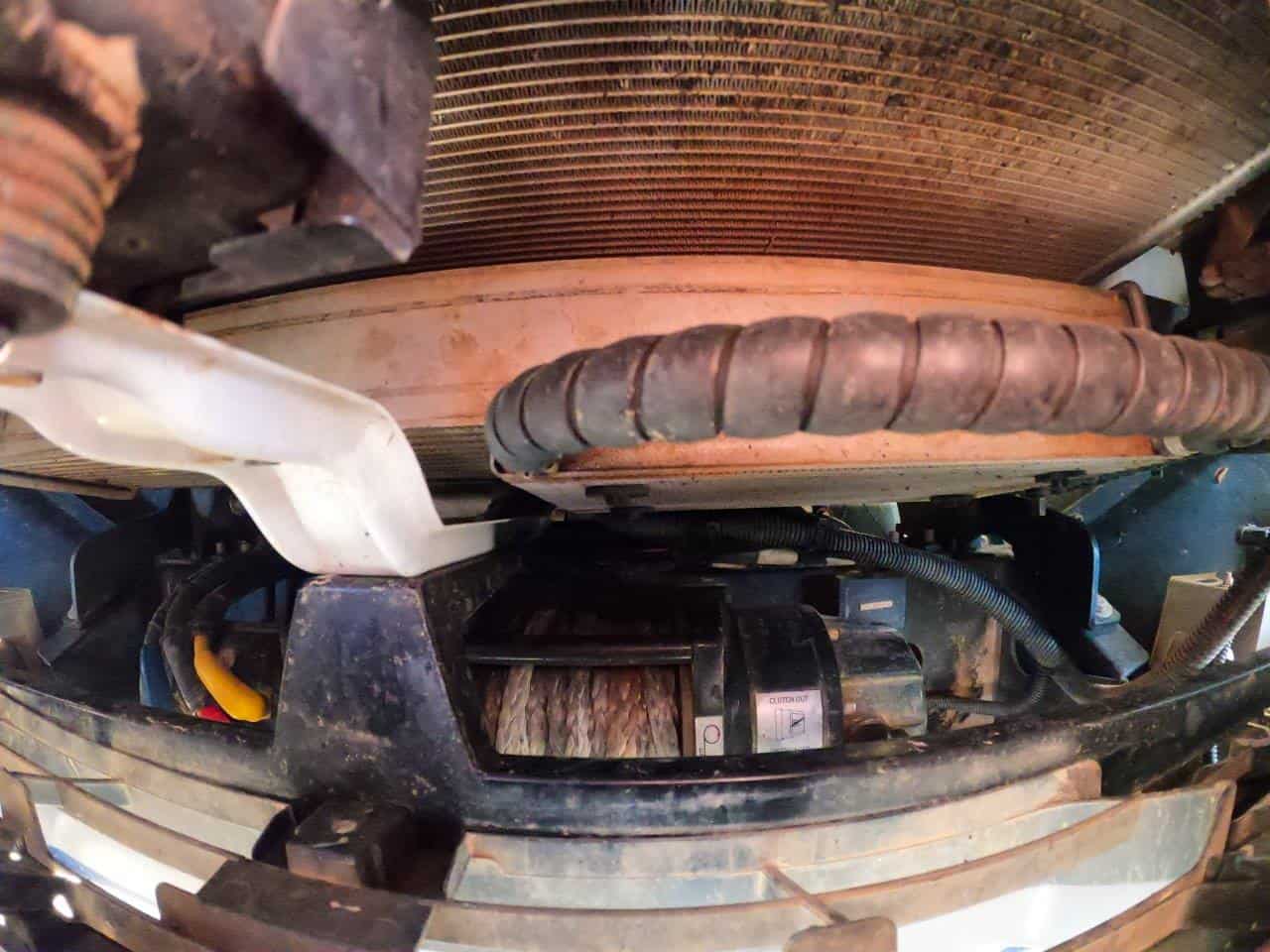 Plumbing the Transmission Cooler up

After the OEM cooler

This way guarantees the fluid is as cool as possible prior to going back into the automatic transmission, but it makes the engines cooling system work harder as the hot fluid hits it first. That said, it still removes some of the stress, as the oil runs cooler overall, which means your engines cooling system has to do less work than without it.

Each way has its own pro’s and con’s, and you should think carefully about the best way for your situation.

Davies Craig sell a few kits, and some come with a small electric fan that draws air through. This helps in areas where it doesn’t get much air flow, or if you just want to increase the flow. Some people hook them up to temperature transducers, so when the fluid temperature hits 90 degrees or the fan comes on, and it doesn’t run any other time.

Under most circumstances you don’t need a fan, but they are a pretty good secondary option for when things really get cooking.

Our fluid goes through the aftermarket cooler first, then the radiator, and then back to the transmission. This helps it warm up quicker, and takes a load off the cooling system. If we were getting seriously hot temperatures, I’d consider having it the other way around, so it maximises the cooling potential, but for now its just fine. 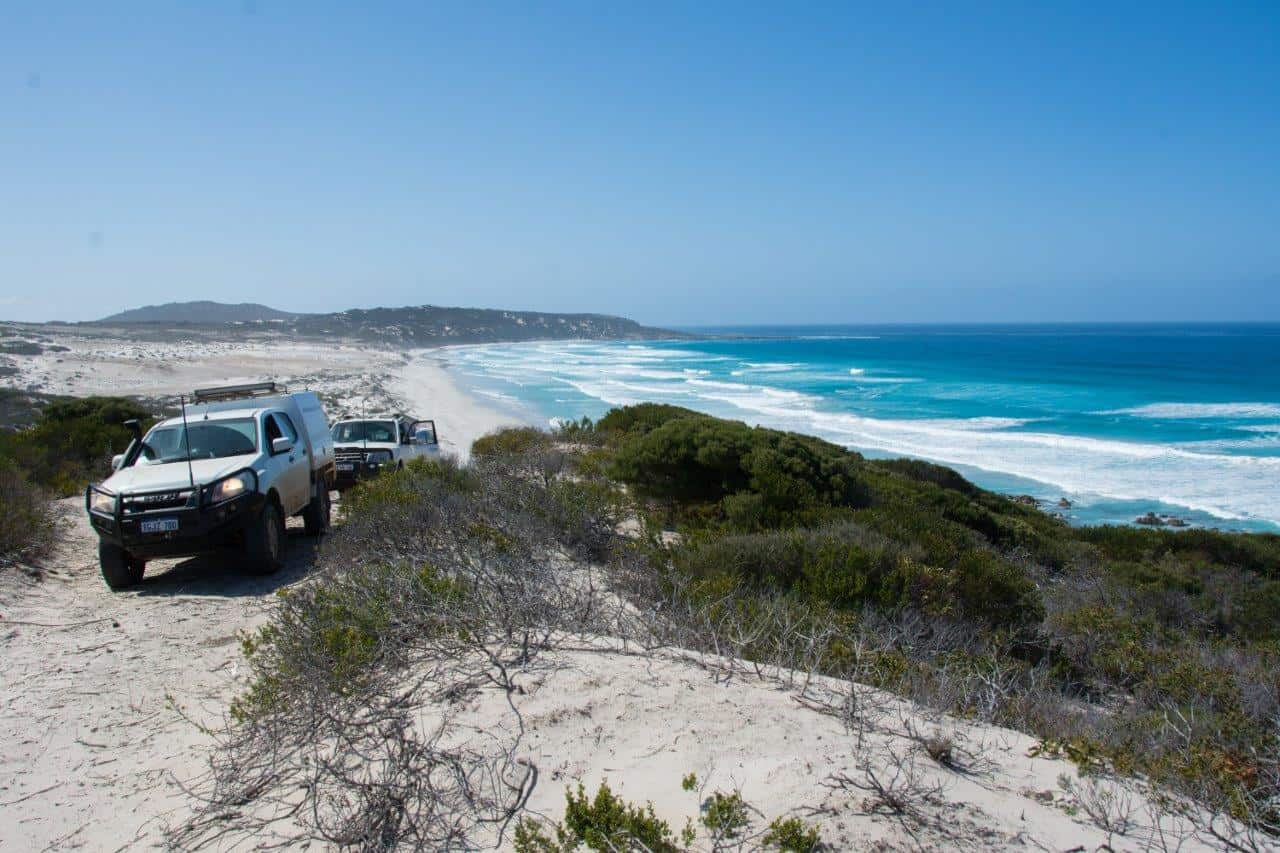 Obviously, the main goal is to reduce the transmission temperatures, and the cooler has done a great job. We’d comfortably see 105 degrees towing the R2 on the bitumen at 100km/h when the ambient temperature was warm, and now its very rarely over 98 degrees.

I’ve actually only had it over 100 degrees a handful of times since fitting the cooler, and it would often hit that when off road (particularly in high range) without it.

The coolant temperature is down considerably too, especially when working hard. I’d regularly hit 97 degrees, at which point the viscous hub would kick in like a mad man and bring the temperatures down, but it rarely gets near this now. 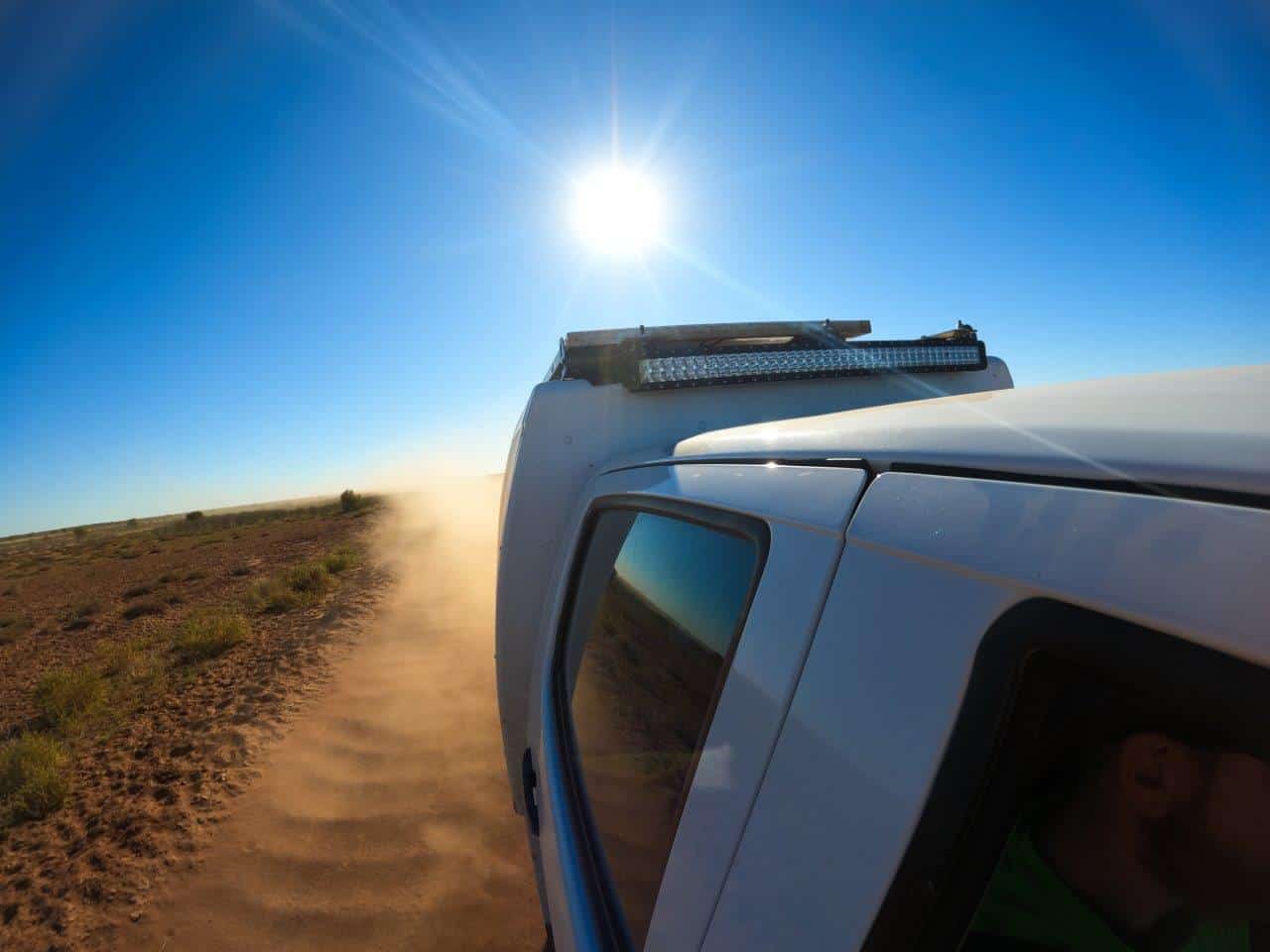 The transmission cooler is absolutely necessary for us, often hitting 95 degrees on a warm day still

There are two things that I am not happy about with the Davies Craig Transmission Cooler:

The way it mounts up

The transmission cooler is pretty light, but the fitting technique is to use ‘pins’ that go through the cooler and then the intercooler behind it. This means it can be fitted in a matter of minutes, but its not as secure, and I can see over thousands of kilometres of corrugations its going to eventually fatigue.

The brackets also go off the vehicle’s body instead of the intercooler, which is a better setup, and its something I’m considering swapping out in the near future.

The bigger gripe for me though, is the hoses. These just slide over barbs onto the cooler, and rely on one hose clamp to keep it tight. When mine were installed they used the reticulation clamps, which cannot be adjusted; you just lock them in and that is it.

A few months down the track and I developed a weep on one of the lines, which meant some oil was leaking onto the cooler, and it slowly ran down the cooler and got caked in mud. The better auto transmission cooler kits come with hydraulic, screw on fittings that are physically locked in place.

The idea of a 5 cent clamp determining the fate of a 10k transmission is not something I’m overly happy about!

Is it worth fitting a transmission cooler?

A cooler temperature is better for the transmission, and lengthens the life of the fluid, which is a good thing. These are a very cheap investment, and like a Catch Can and secondary fuel filter, they are well worth fitting if you are working your vehicle hard.

Whether you need one or not is dependent on how hard you push your vehicle. Start with an OBD2 reader, and go from there.