New tyre time for the Dmax; we’ve gone for something different

A couple of months ago, I knew our camper trailer tyres were coming to end of life due to poor wear, scalloping and they were getting close to the indicators. We did one more trip, and had a tyre completely disintegrate on the way to Shark Bay, which accelerated the need for new tyres.

I chose two new Toyo Open Country RT’s, as I’d heard good things about them, they weren’t quite a muddy, had good puncture resistance, the same 1550kg load rating and looked like they’d do the trick well. 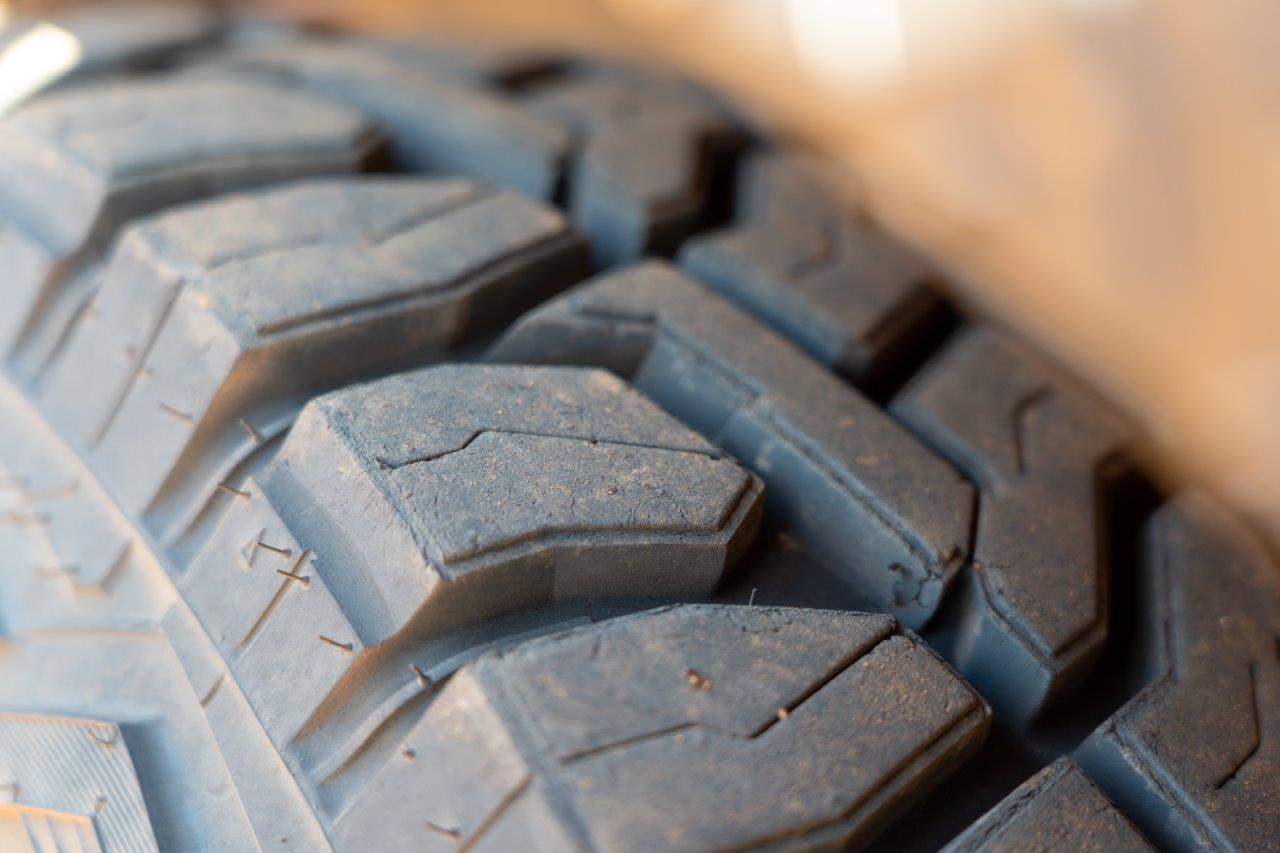 I went back and forth about getting them for the Dmax too, but the miser in me decided to push our Bridgestone Dueler 697s for one more trip before retiring them, which we did. It worked out OK except for a bit of lack of traction on some of the 4WD tracks, and we got a puncture straight through the tread pulling into the Kennedy Ranges.

After doing a final trip of several thousand kilometres of nasty gravel roads and 4WD tracks in the Pilbara though, these were absolutely knackered with hardly any tread left above the wear indicators, and a lot of chunks/scrapes done to them.

Knowing how hard it was to get new tyres, I actually phoned ahead and got 4 new tyres put aside for us so they’d be ready to fit in Perth. When we had the camper trailer tyres fitted they were the last two available in Perth at this particular franchise, and the wait time was on for new stock. 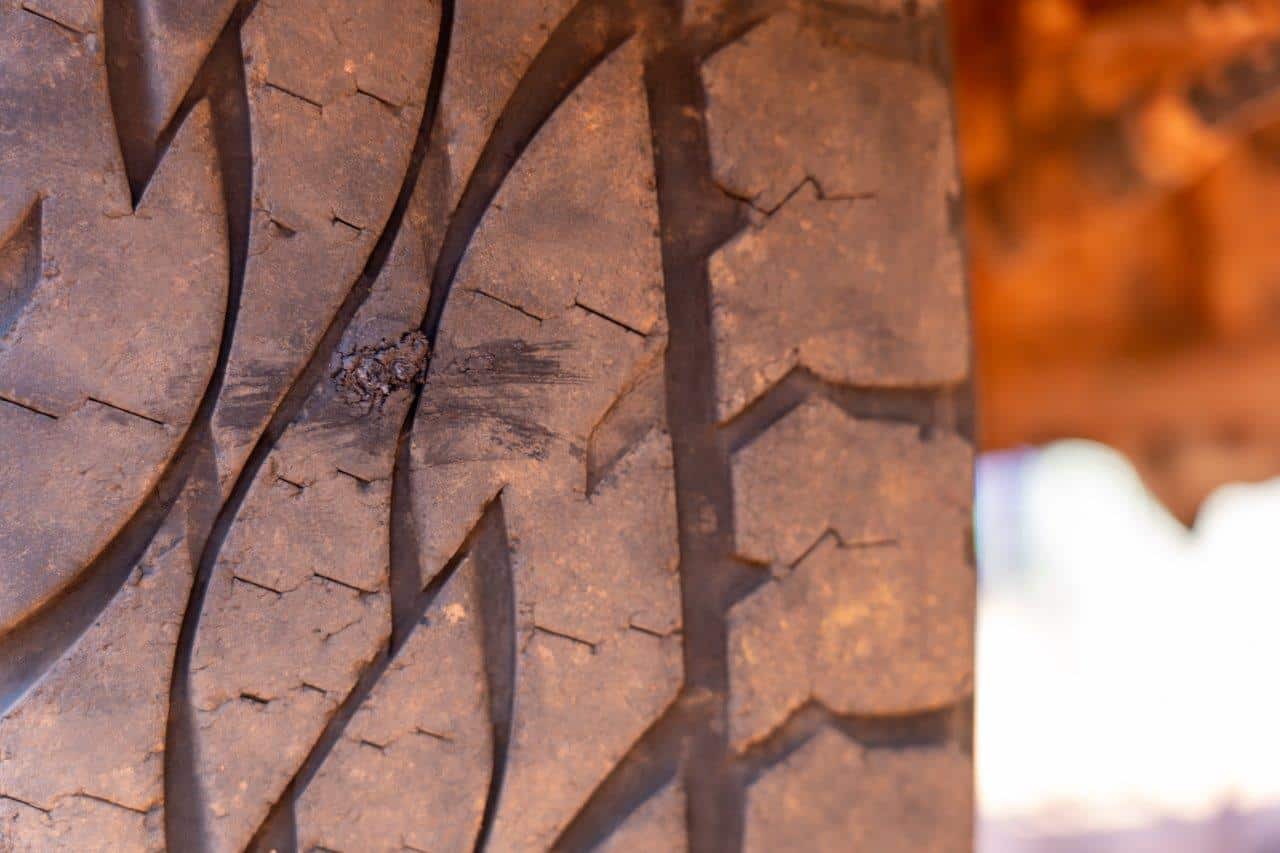 Our Bridgestone 697’s are dead, with one getting a puncture

What did we get?

These guys were the cheapest last time we got our Toyo Open Country AT2’s as well, and always do a good job, so I keep returning. 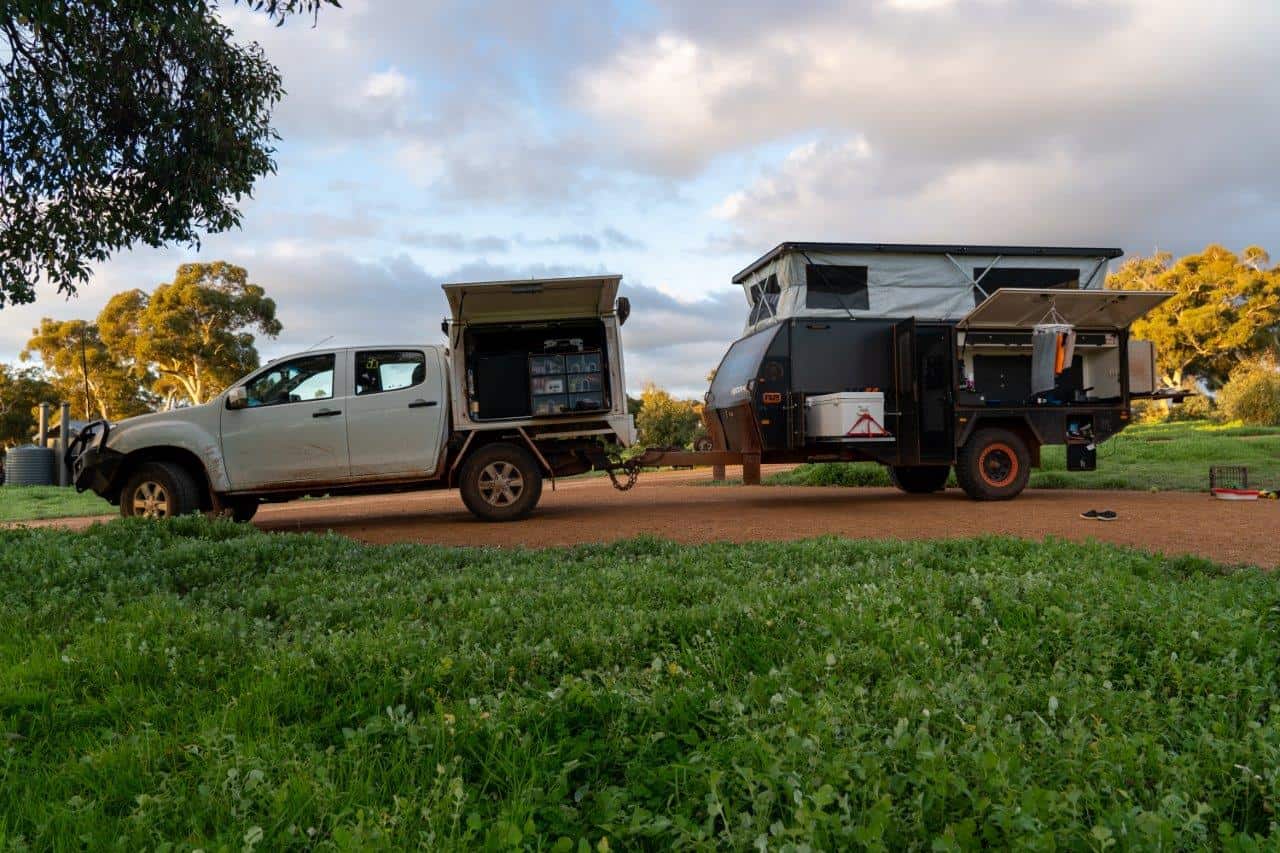 Our Dmax will have matching tyres to the camper

Are we changing size?

We’ve stuck with the 265/75/16 tyre size that we have been running for a long time now. I did consider going to a slightly smaller size (back closer to factory) to get some better fuel economy, but I love the extra clearance that these tyres give, and we need it from time to time, so they’ll stay.

It also means that its the same tyre size as our Reconn R2 hybrid camper, which is helpful if things go very badly wrong!

Why the Toyo Open Country RT?

I was reasonably happy with our Toyo Open Country AT2s (except the wear), and even the Bridgestone Dueler 697’s, but I couldn’t help but feel a need for a bit more traction, and potentially better puncture resistance too. I was well aware of what happens when you go to a heavier 4WD tyre, but decided it was worth it anyway.

For those interested, you can read the post I wrote about tyre weights, where we compare a range of tyres and see how much they vary.

As mentioned above, the primary reason for getting the Toyo Open Country RT’s was increased traction. You can clearly see that these are chunkier, and will help hugely when it’s a bit wet or slippery, especially towing our camper trailer. I’m well aware that our Dmax is not a tough tourer, and it can reach its limitations quite easily.

Couple that with the fact that it has no lockers, you are seriously dependent on the tyres finding traction and pulling you up and over whatever you are tackling. With a camper on the back reversing for a second go is the least preferred method, so let’s get some decent tyres to fill the gap!

I also know that a good set of tyres makes the biggest bang for buck, and so the Open Country RT’s should do the trick just nicely. They’ll give me extra traction as needed when its muddy, slippery or rocky, and have even better puncture resistance than the Open Country AT2’s, so it should be perfect. 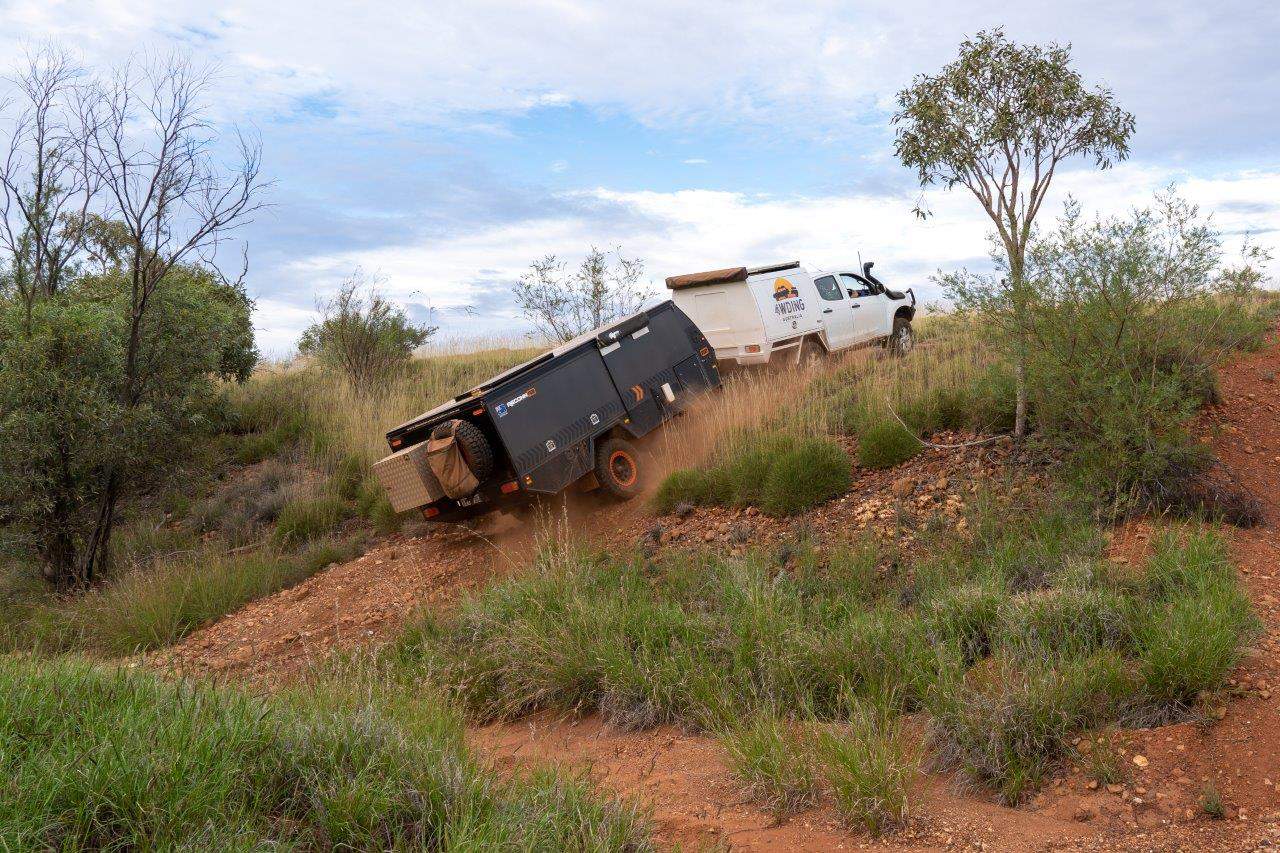 I never buy anything without getting feedback from others. In this case, there’s a heap of good feedback online from various people (with no agenda), and I know a few people who have been running them that are very pleased.

They fill an awesome niche

I honestly don’t know why no one else has filled the niche between an all terrain and mud terrain before. All terrains are good for an overall compromise, but the moment you hit something slippery they are not very good at all, and that’s frustrating.

If you could get something that performs a bit better in terms of traction off road, without whirring like a full on muddy, or wearing terribly, or killing your fuel economy, why wouldn’t you?!

They are well priced

Our first two cost $315 each, and the second set of 4 I purchased were $319. Compared to several other brands, these are well priced. Not cheap cheap, but certainly not $450 – $600 that you can pay for some tyres, depending on the rim size you are running!

Their load rating is fantastic

I mentioned I wanted to retain the 1550kg load rating that our Achilles XMT’s had, as it made sense. Our camper trailer is rated to 2600kg, which could theoretically be 1300kg on each wheel (minus tow ball weight), and potentially a lot more when its bouncing around, so going for the highest load rating seemed the obvious choice.

Our rear on the Dmax is heavier than the front, with one side weighing around 960kg, which means its got plenty of wiggle room.

They aren’t quite a mud terrain tyre

I quite like mud terrain tyres, but they have a lot of downsides. Noise is the most obvious, but what you might not know is that they actually offer far worse traction in almost every scenario except mud, compared to an all terrain tyre.

Mud terrain tyres are always the heaviest option, often have more issues with wear, and can get badly damaged on rocky roads, which we’ll be doing a lot of. The Toyo RT has chunky tread, but its much closer together and I suspect they will have some of the benefits of a mud terrain tyre, whilst not having all of the downsides of a muddy. Time will tell for sure though. 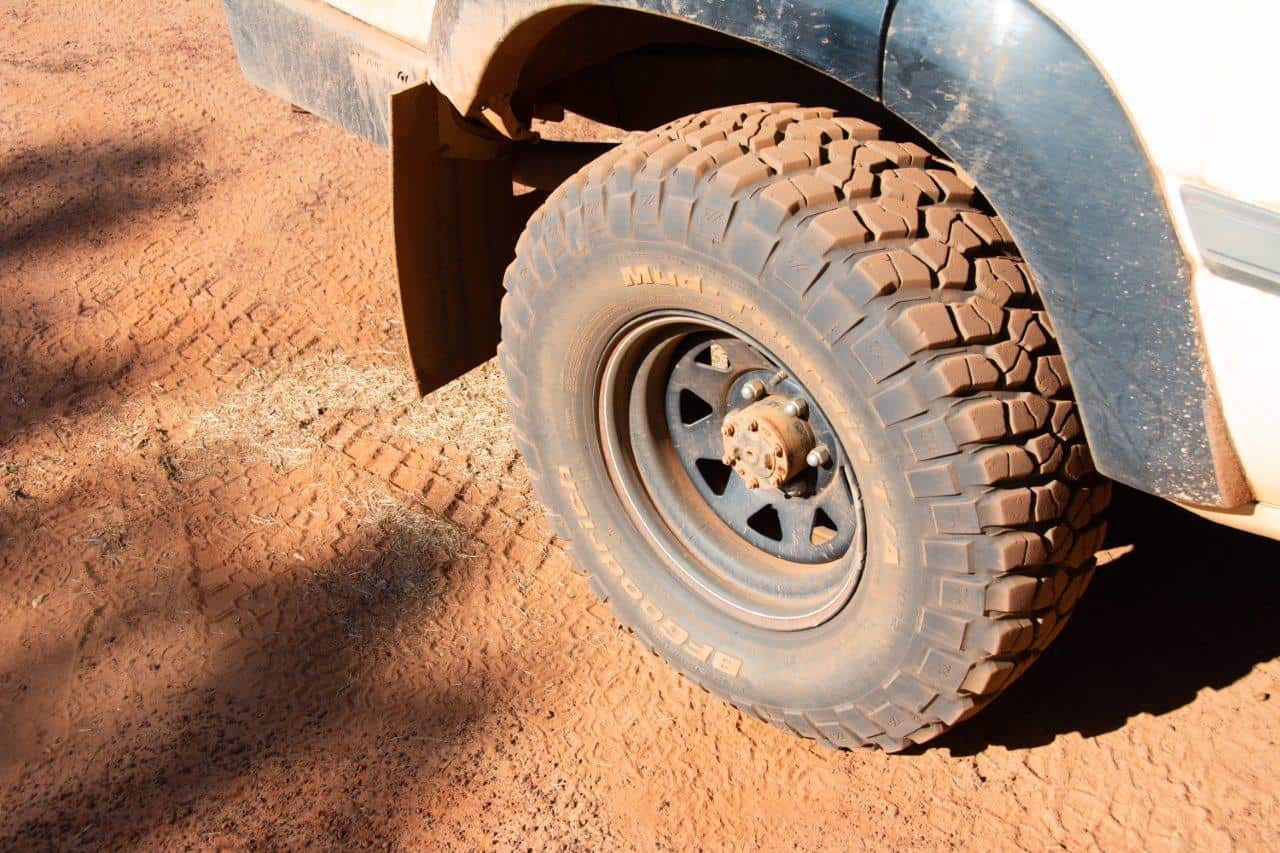 We had mud terrains on our 80 Series, and I’m avoiding them for now

We’ve hammered them on the camper trailer

I’m quietly confident in these tyres, as we did about 4500km from Perth through the Pilbara and back down again, and gave them a flogging. I had the brakes locked up a couple of times that we came to wash outs too fast, we ran them nice and low for the rocky terrain and we had the camper trailer bouncing and rocking all over the place.

These tyres didn’t bat an eye lid. They wore about 1mm, had no obvious damage and bagged really well.

Our go to pressure for high speed driving was 33 PSI cold, which fits in well with a 30% reduction of air from the 54 PSI we normally run them on the road.

I was seriously impressed with them, and whilst its on a trailer that doesn’t drive I think they’ll go really well on the Dmax too. 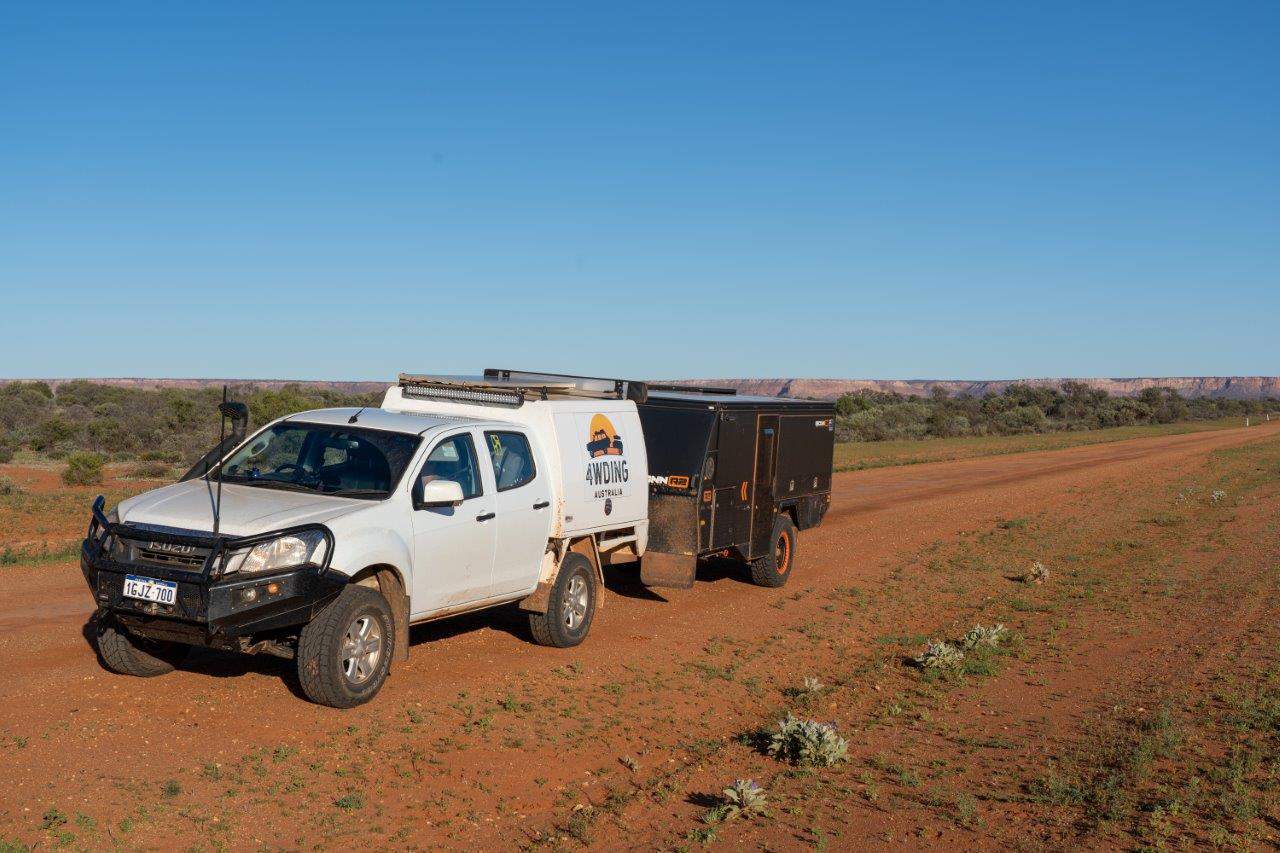 We’ll do a full, independent and long term review in time

As you might know, we are doing a lap of Australia starting very soon, and that means these tyres are going to cop a lot of use in a short period of time. We paid for these entirely with no sponsored rubbish going on behind the scenes, and I’ll do a full review. I want to try and rotate them well, but we only have 4 tyres in the mix and I’ll let you know if we think they are good, average or rubbish.

Just quietly though, I think they might be the best tyre we’ve run before, but I’ve been wrong before!