On a recent stay to the beautiful Pemberton area, I was determined to check out Windy Harbour, and the 4WD tracks out to Fish Creek. I’d been there once before, and way back in school we hiked from Windy Harbour to Marrinup Lake, and since then always wanted to head back to explore it more. 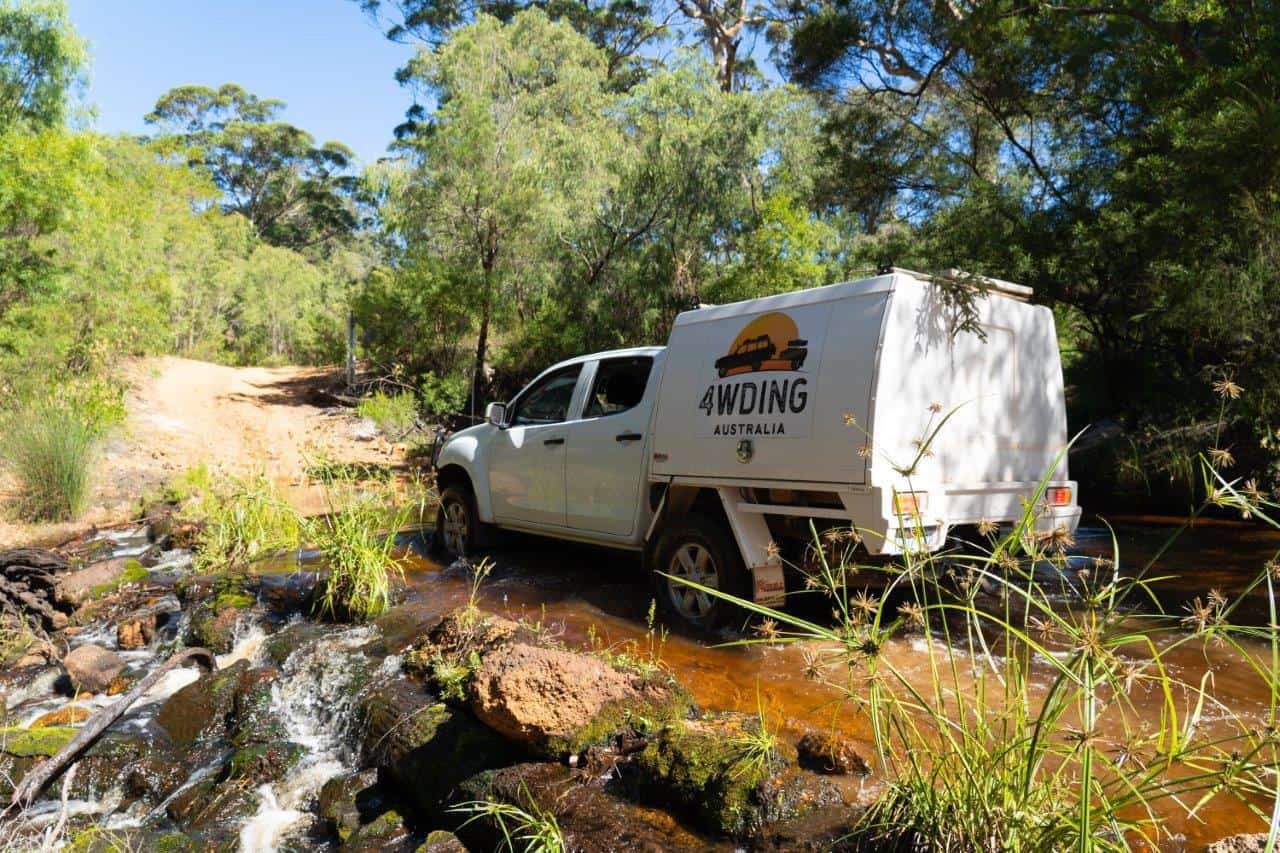 This time, we called into Windy Harbour to get a feel for the place, before taking the 4WD track to the Gardiner River mouth.

Its worth noting that you can get from the river mouth to Windy Harbour via the beach, as long as the tides are friendly. On this particular day it looked like they might be, but the beach was still quite tight and being on our own, I wasn’t keen to push our luck. 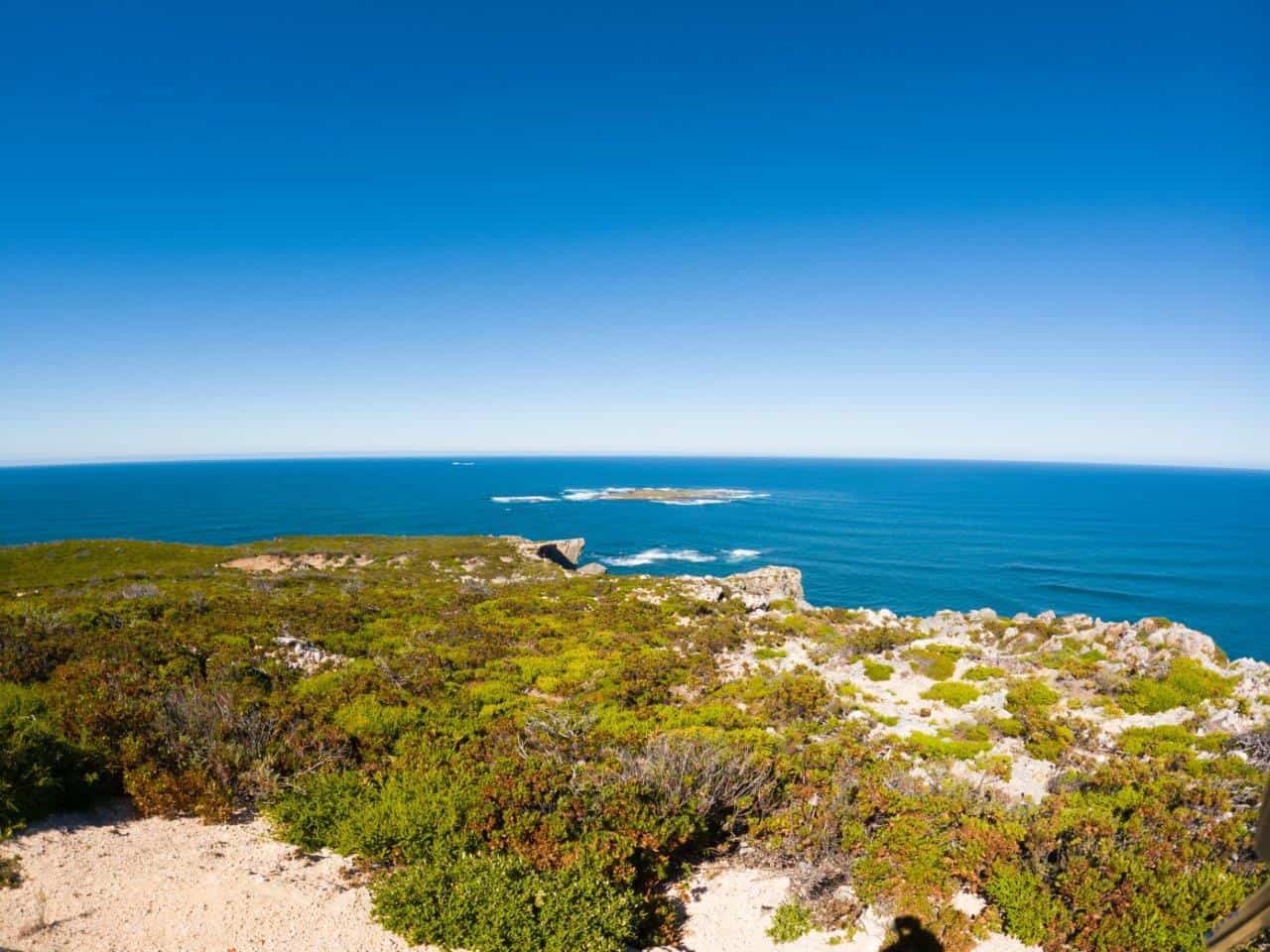 Views from north of Windy Harbour

Gardiner River is stunning, and varies in water level considerably. When we arrived, it was only about 4 metres wide in some sections, and around 20 – 30cm deep. 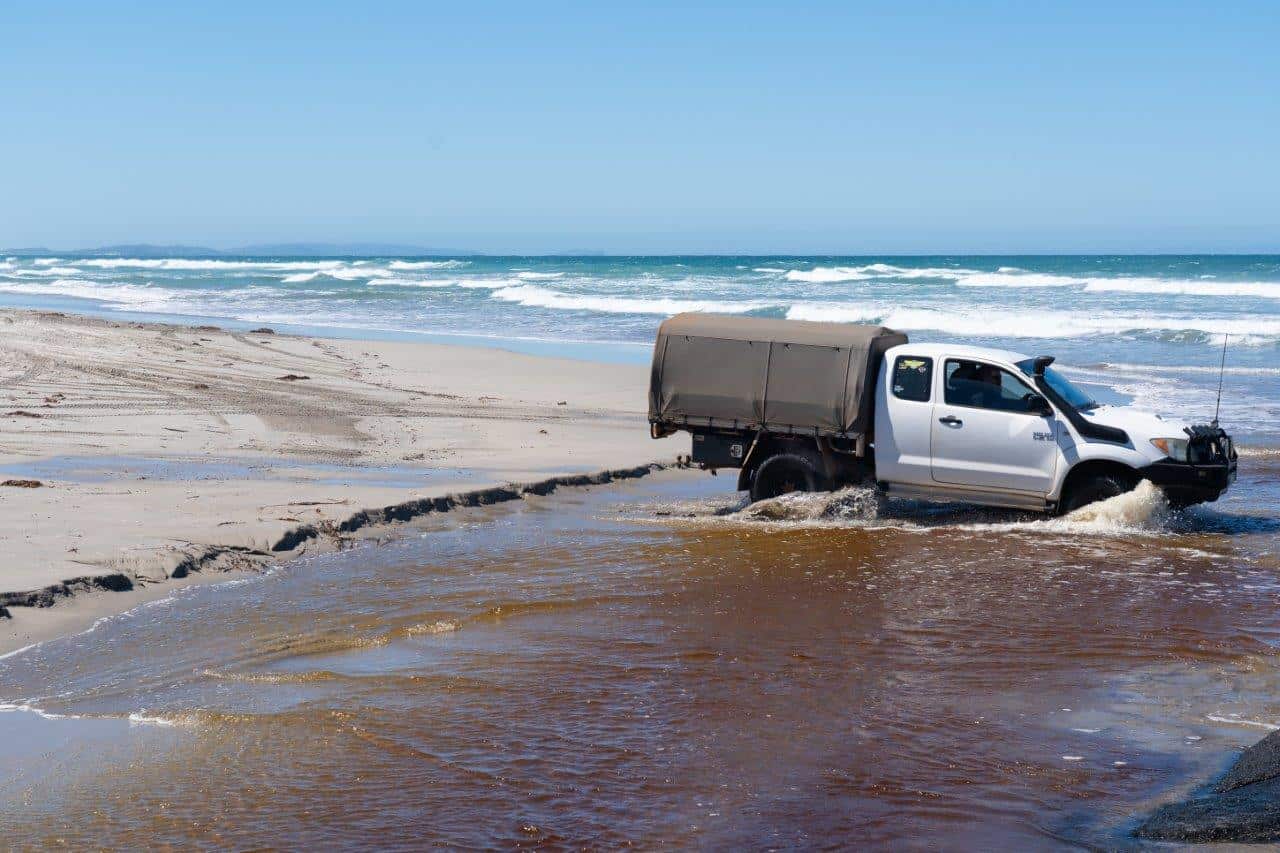 We could have crossed, but I hate salt water 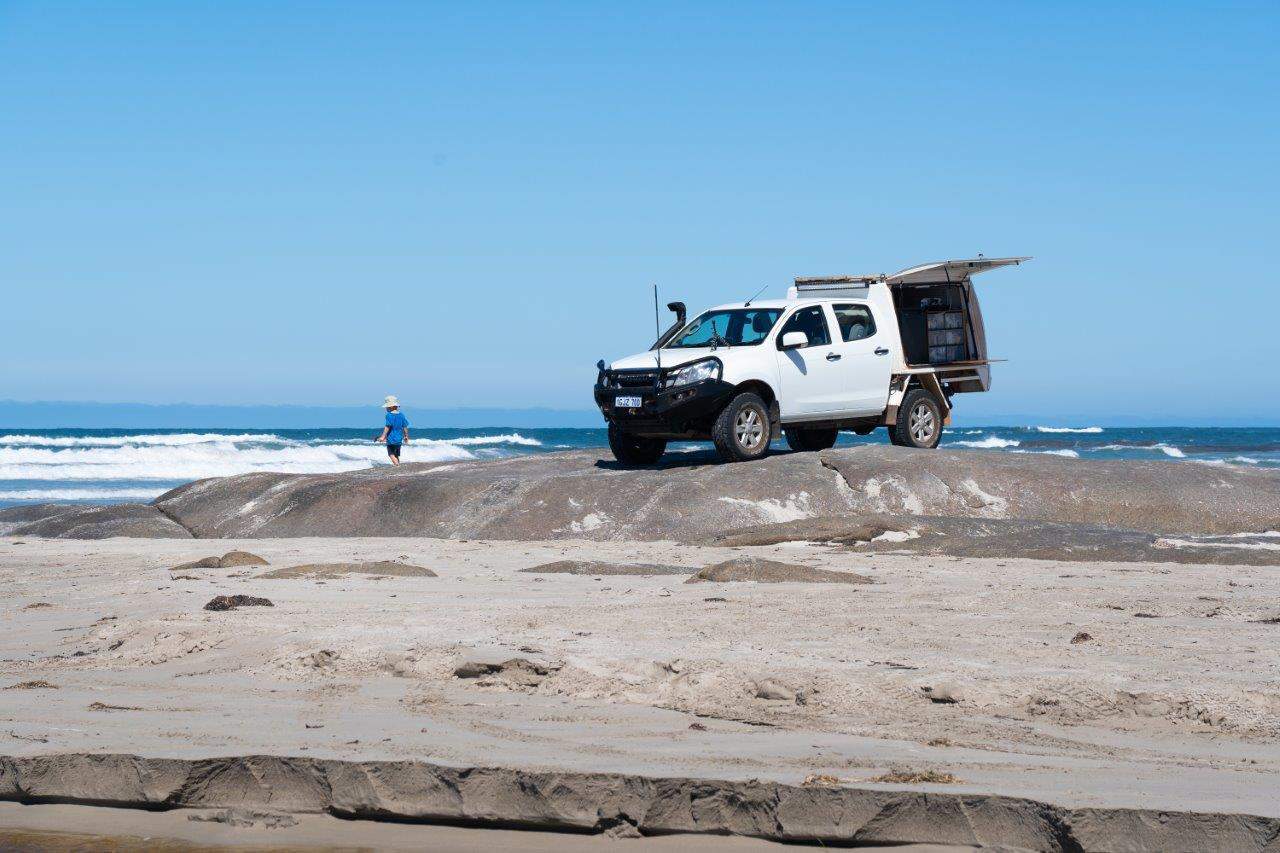 It’s a beautiful spot though 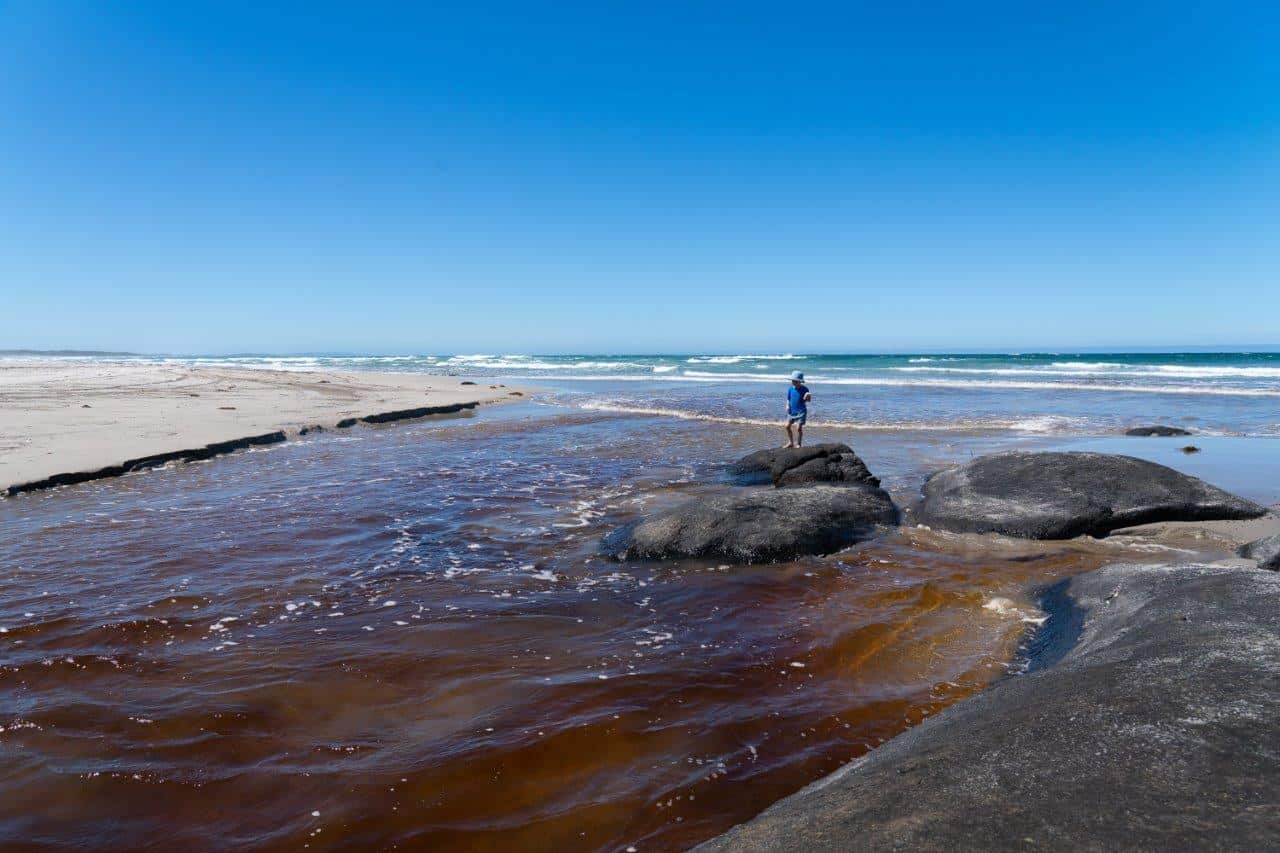 Relaxing at the river mouth

I considered crossing, knowing that it would be much faster to get to Fish Creek, but watching the rising tide push waves of salt water into the river mouth I decided it wasn’t worth it, and we pushed inland.

There’s a track that heads along the northern side of the Gardiner River, and bumps into Chestershire Road, which starts just south of Northcliffe and is one of the more common ways into Fish Creek.

Once we hit that, you head south along it all the way until Moores Hut Road. This takes you through a well marked out river crossing, and from there you can head in lots of different directions. 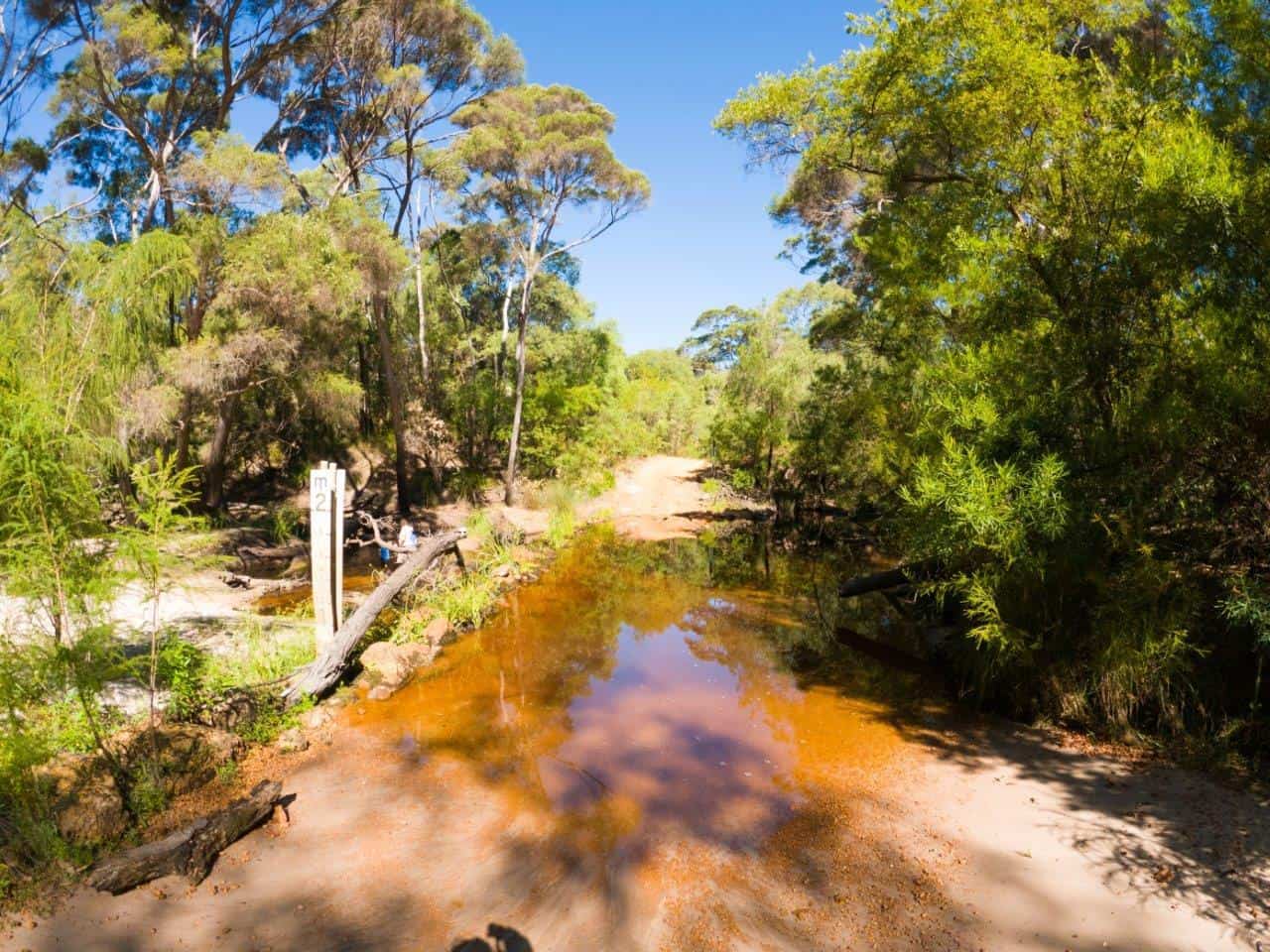 You’ll come across here, where its all fresh water

Moores Hut is one way, Fish Creek Hut is another and Fish Creek is the southern most option. We took the furthest south option and headed out almost all the way to the Broke Inlet, only turning around due to a lack of time. 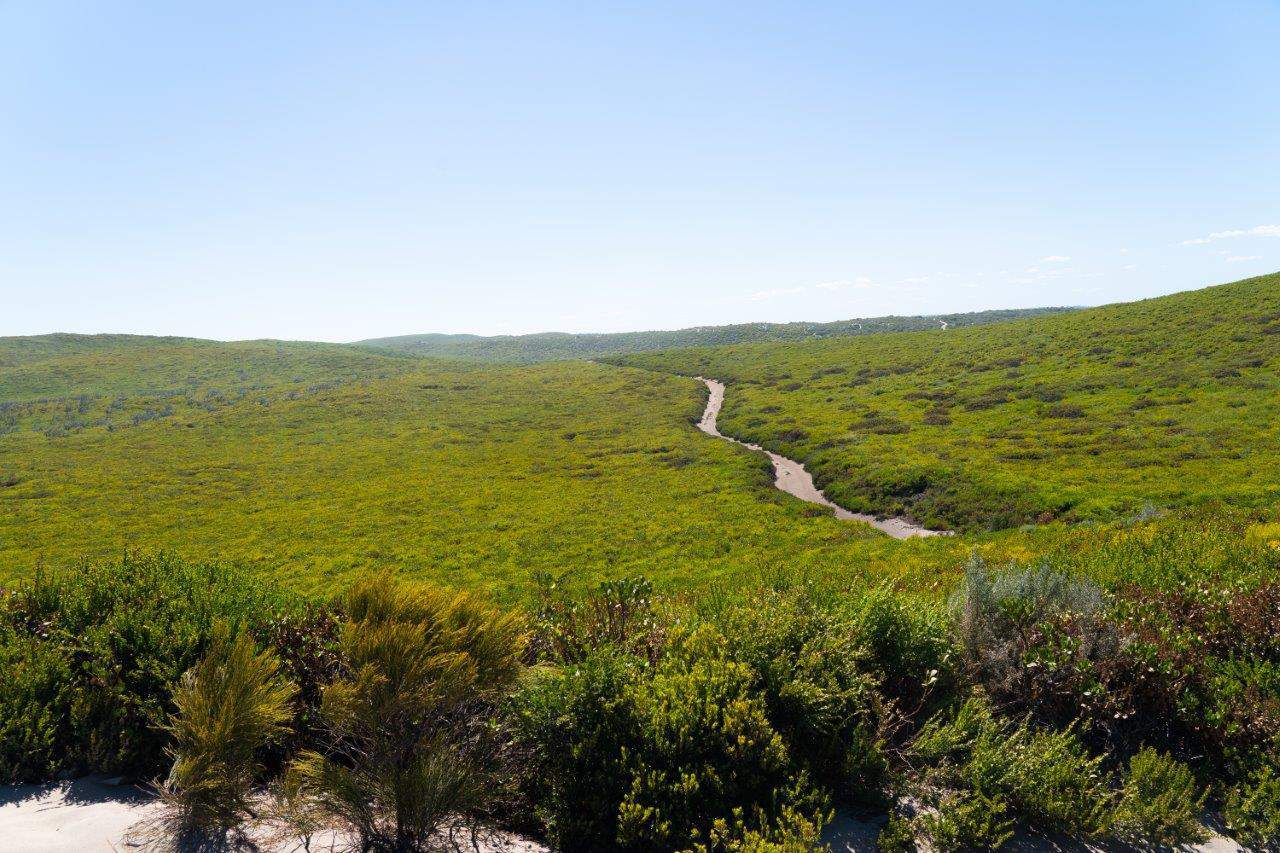 There’s a huge number of tracks in the area

The 4WD tracks are generally pretty easy, with exception of some hill climbs that have huge wombat holes. We did a few that I was really surprised the Dmax got up, and came to one that had several holes more than a metre deep which made us turn around.

I decided it wasn’t worth going down to explore a track we didn’t even know the end of, and luckily found a cleared section of bush to spin around. 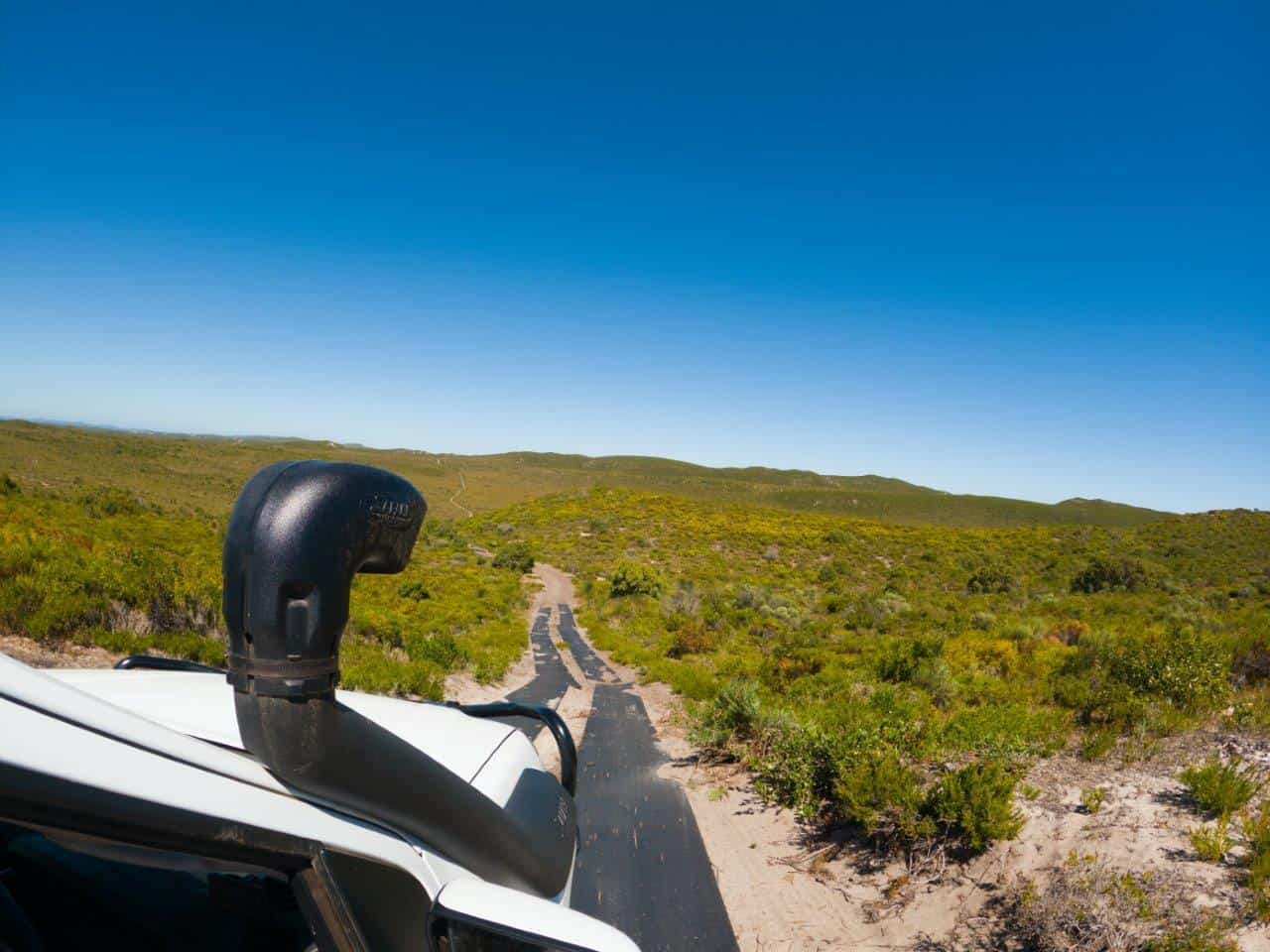 Some areas have rubber matting put down to protect the track 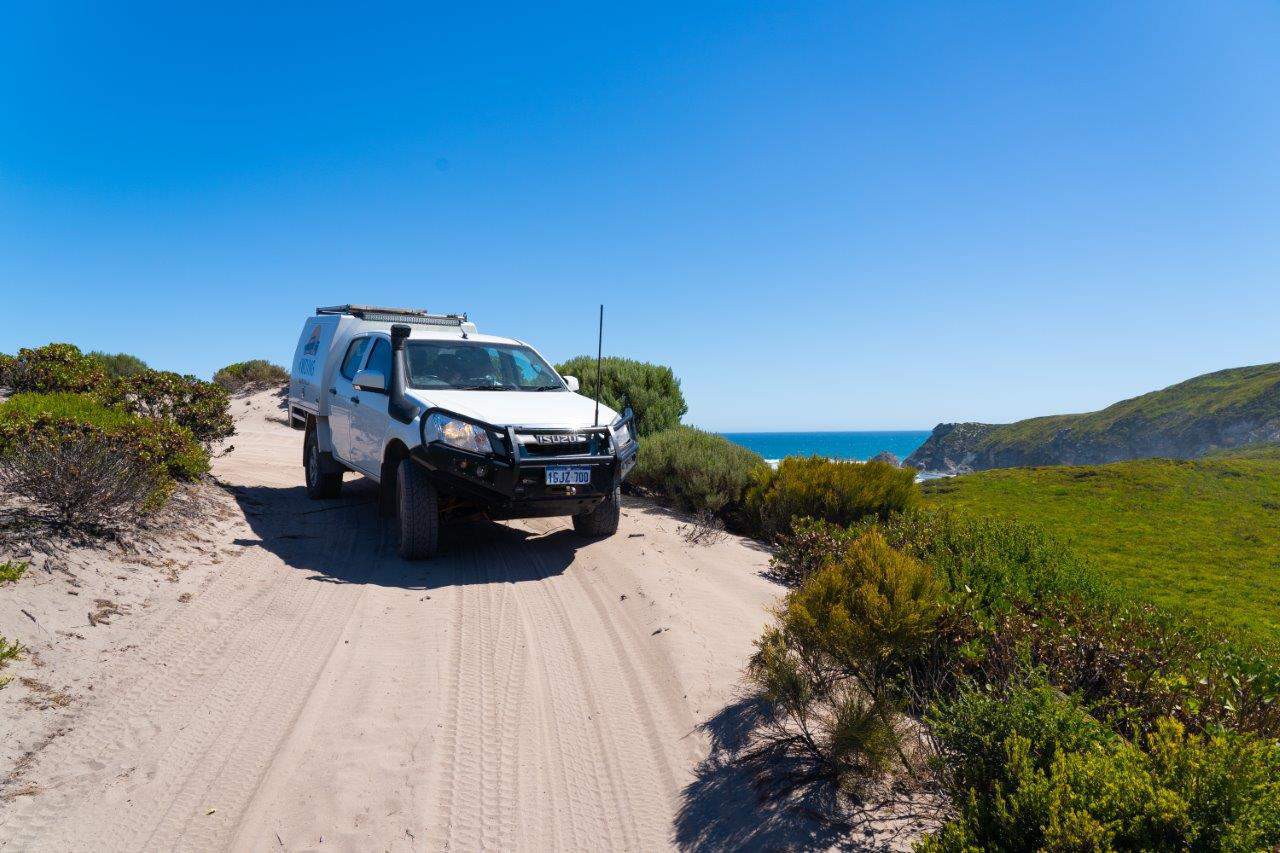 The coastline here is quite incredible 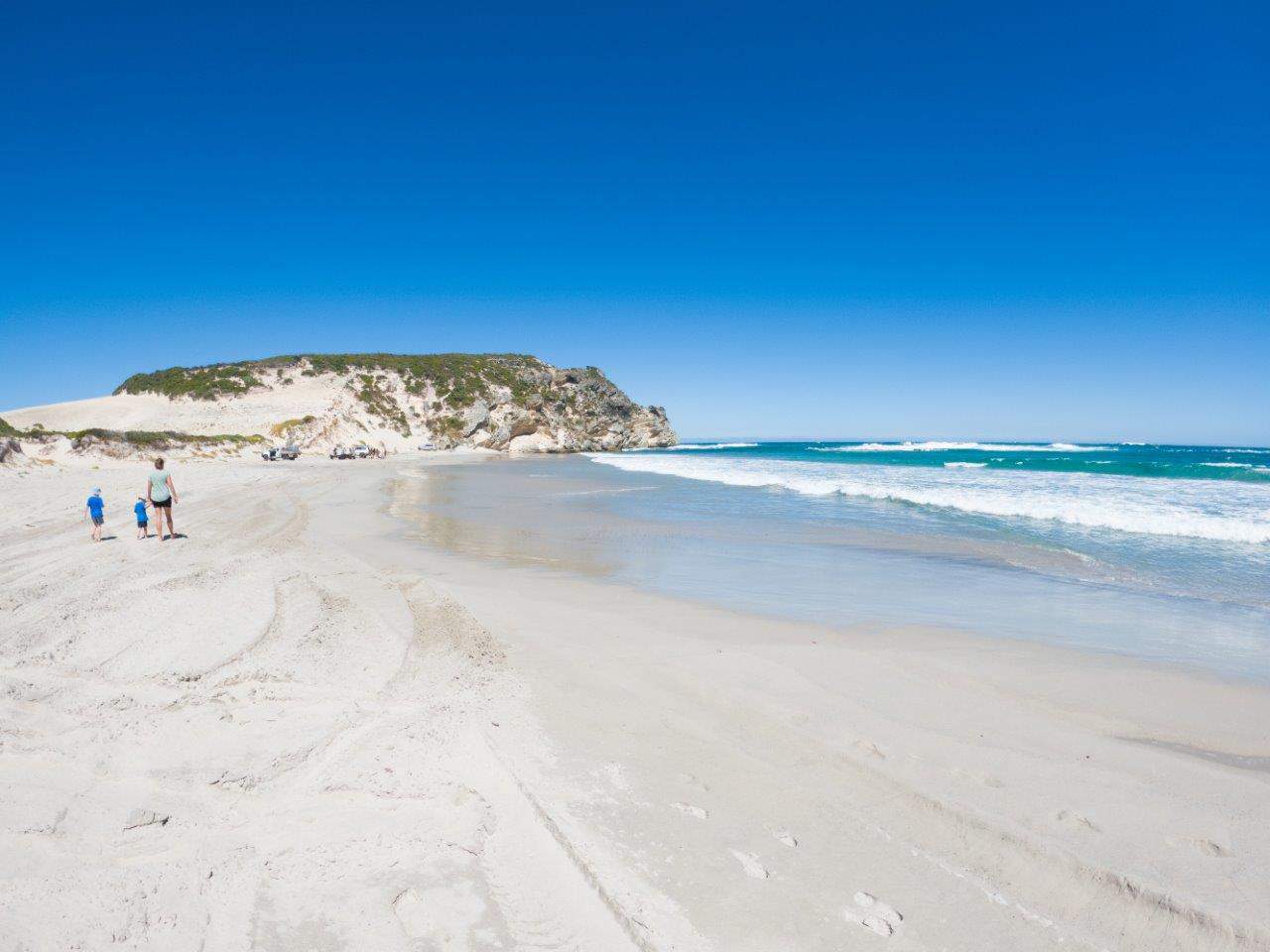 On the beach right near Fish Creek

What do you need?

You absolutely need your tyres down, and around the 18 – 20 PSI maximum, with even lower as needed. At one stage I did get stuck on a hill trying to turn around, and had to rock it back and forth a number of times before it crawled out. 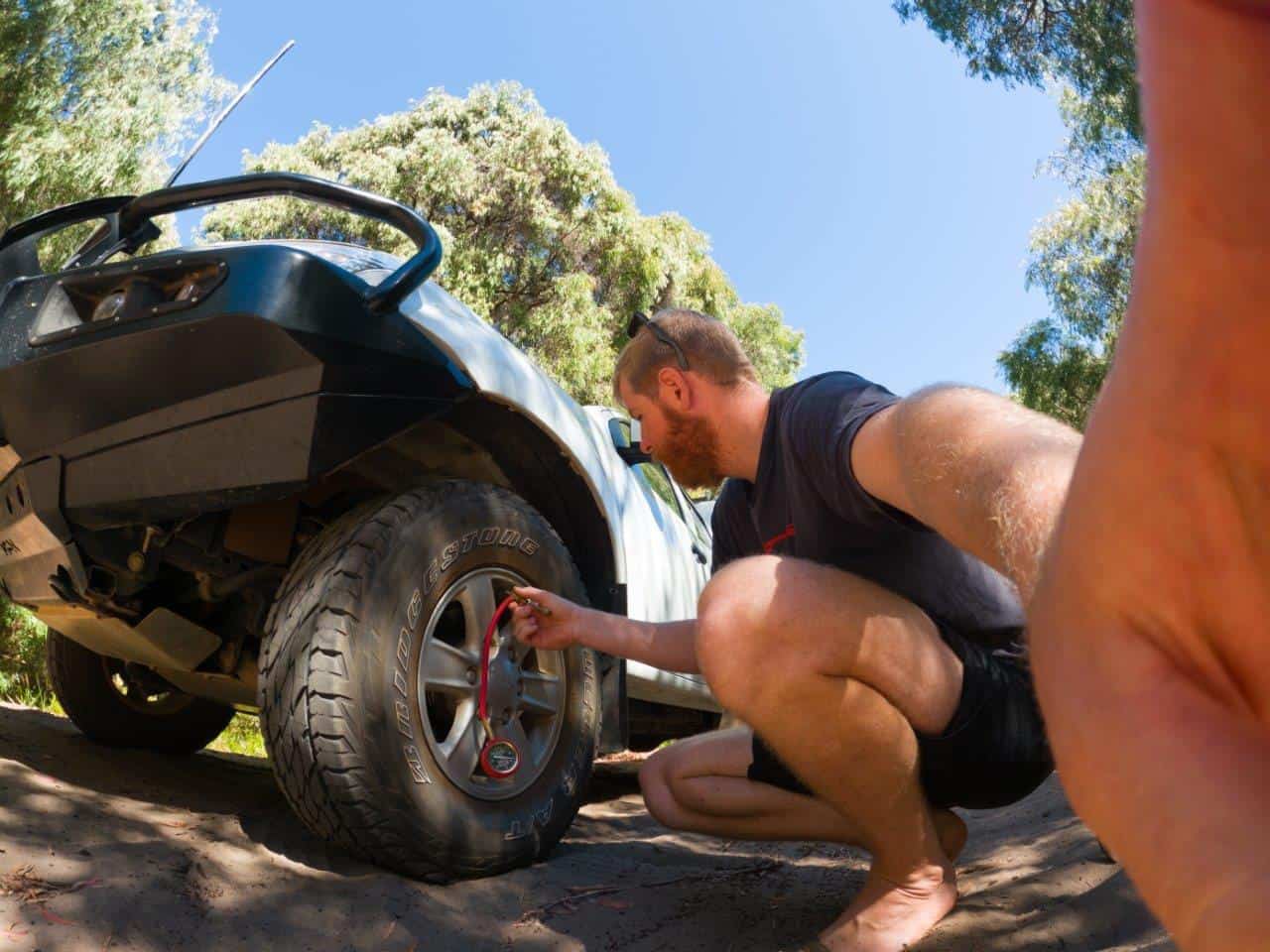 You need to deflate, and well or you’ll get stuck and chop the tracks out

Don’t head here without a good set of maps too; there are quite a number of loops and different tracks that go all over the place, and even with the maps we had to double check a number of times that we were heading in the right direction.

We saw a lot of people launching boats at the end of a cove, but you’d want to know exactly what you are doing as the swell can be big, and make beach launching and retrieval very difficult.

All in all, an amazing day out exploring some great coastline we’d not done before, and we’ll be back. 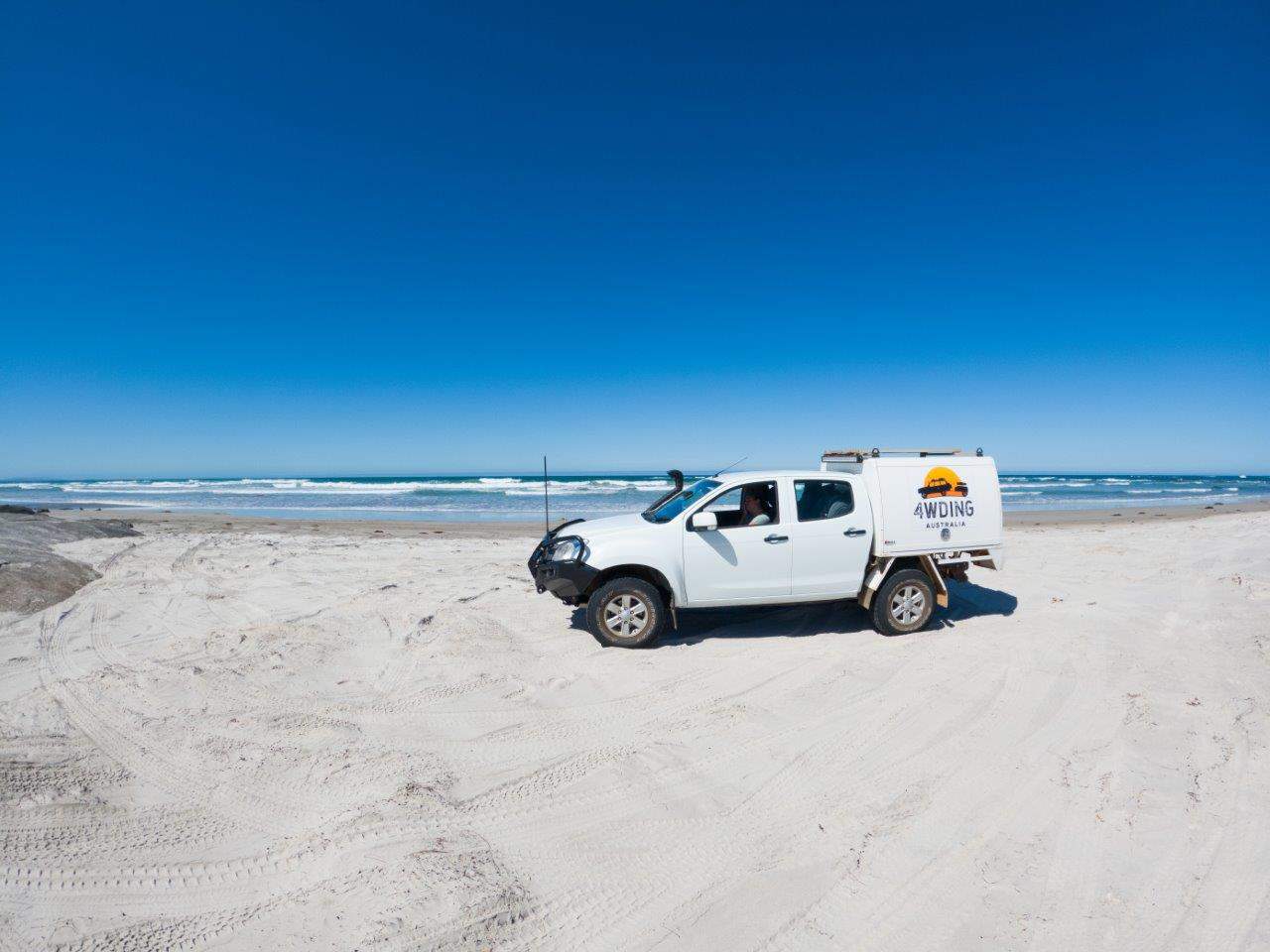 We loved this part of the world, and whilst it was a decent hike from Pemberton and our accommodation at Fernbrook Farm Stay and out for the day, its completely worth it.