Solar panels for camping aren’t really worth it, are they?

While camped at the Kununurra, a bloke arrived at the campsite next door, and we got chatting. He wandered over to our mammoth camping solar setup on the camper trailer boat loader, and asked me what I thought of solar panels, saying ‘Solar panels for camping aren’t really worth it, are they’.

I felt a bit unsure of what to say really; solar technology has come in leaps and bounds, and I know for us, we’d never be without it.

As our conversation developed, I realised he didn’t know a whole lot about 12V gear, and perhaps there are others out there who think solar isn’t worth it.

Now, its not going to suit everyone, and some people are happy with their generators, and that’s fine too (although I am not a fan at all!). However, for the average user with just a 4WD, a fridge and some lights to run, you won’t be able to stay in one spot for more than a couple of days in average temperatures without getting power from somewhere.

Now, I will make a quick point of saying that just because your fridge and lights still run after 3 – 4 days, doesn’t mean what you are doing is a good idea. Unless you have lithium batteries, running your batteries below 50 percent state of charge on a regular basis will lower their life expectancy considerably.

This means for a 100 amp hour battery, you should really only be using about 50 amp hours. Regularly going below this will shorten the life of the battery (but it is a balance as the batteries will fail of old age eventually too). 50 % state of charge is around 12.05 – 12.1 volts. If you want to know more about this, check out Are you damaging your deep cycle batteries?

In reality, you have 3 options for power:

The alternator on your 4WD’s motor does a pretty good job of charging batteries (unless you have a smart alternator on a lot of modern vehicles, in which case you either need a DCDC battery charger, or some modifications to bump the voltage up or turn the smart function off).

The most basic setup is to have your alternator connected to your batteries, and while you drive it charges them up. 95% of 4WD’s are set up like this, with an isolator that stops your primary, cranking battery from discharging.

The isolator can be a manual switch, an automatic switch (Voltage sensitive Relay) or in many cases today its a DCDC battery charger, which prevents the back flow of power.

This is a great option, and you want to have it setup so this works. However, it only works when your 4WD motor is running, and batteries can take a VERY long time to charge.

If you aren’t regularly driving your vehicle for 2 – 4 hours every couple of days, there’s a pretty good chance your batteries are still going to end up flat, in time.

The DCDC charger for our Dmax

Generators are fantastic for running big power consuming devices. The downside of course, are many; they are heavy, noisy, require fuel and maintenance and in general just annoy your neighbours.

The issue here of course, is the moment you turn your generator off, you have no power. You can charge your batteries with a battery charger, or some have this inbuilt as a feature, but you still need to have a battery bank that can handle what ever you are going to run off it, for the duration where you aren’t running the generator. 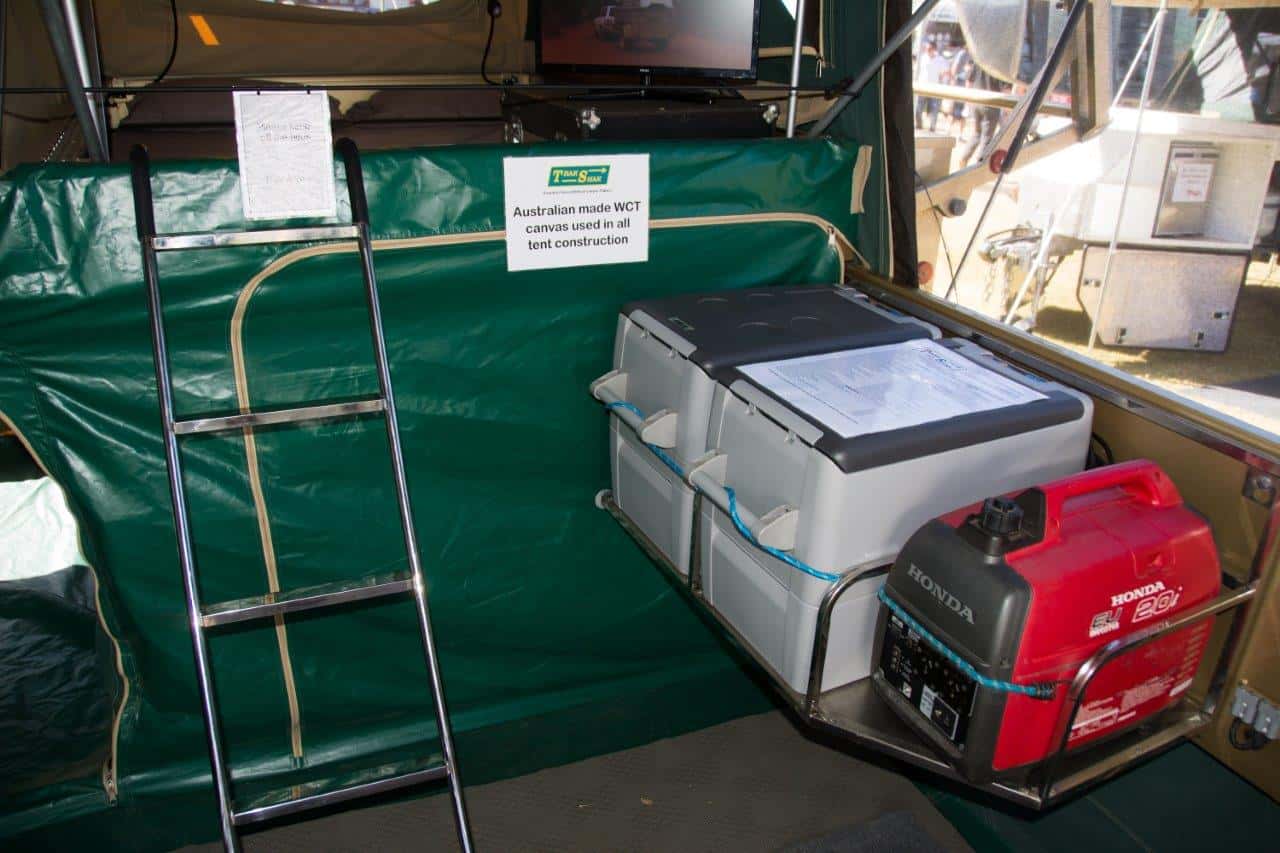 A generator also works very well for some people

Solar on caravans, camper trailers, RV’s and 4WD’s has become incredibly popular over the last decade, because it is an amazing alternative. Panels are very economical today, regulators have become substantially better and you can store the power in batteries fairly easily.

The most basic solar setup in a 4WD is to have your batteries charging from the vehicles alternator (or DCDC) and have solar also being fed in. This way, when you stop your vehicle, and the alternator isn’t doing anything, the solar kicks in and keeps the batteries topped up.

There’s plenty of different options for a camping solar setup; blankets, fixed panels, portable panels, folding panels and the list goes on. What suits you will depend on how much power you need, and how often you move. 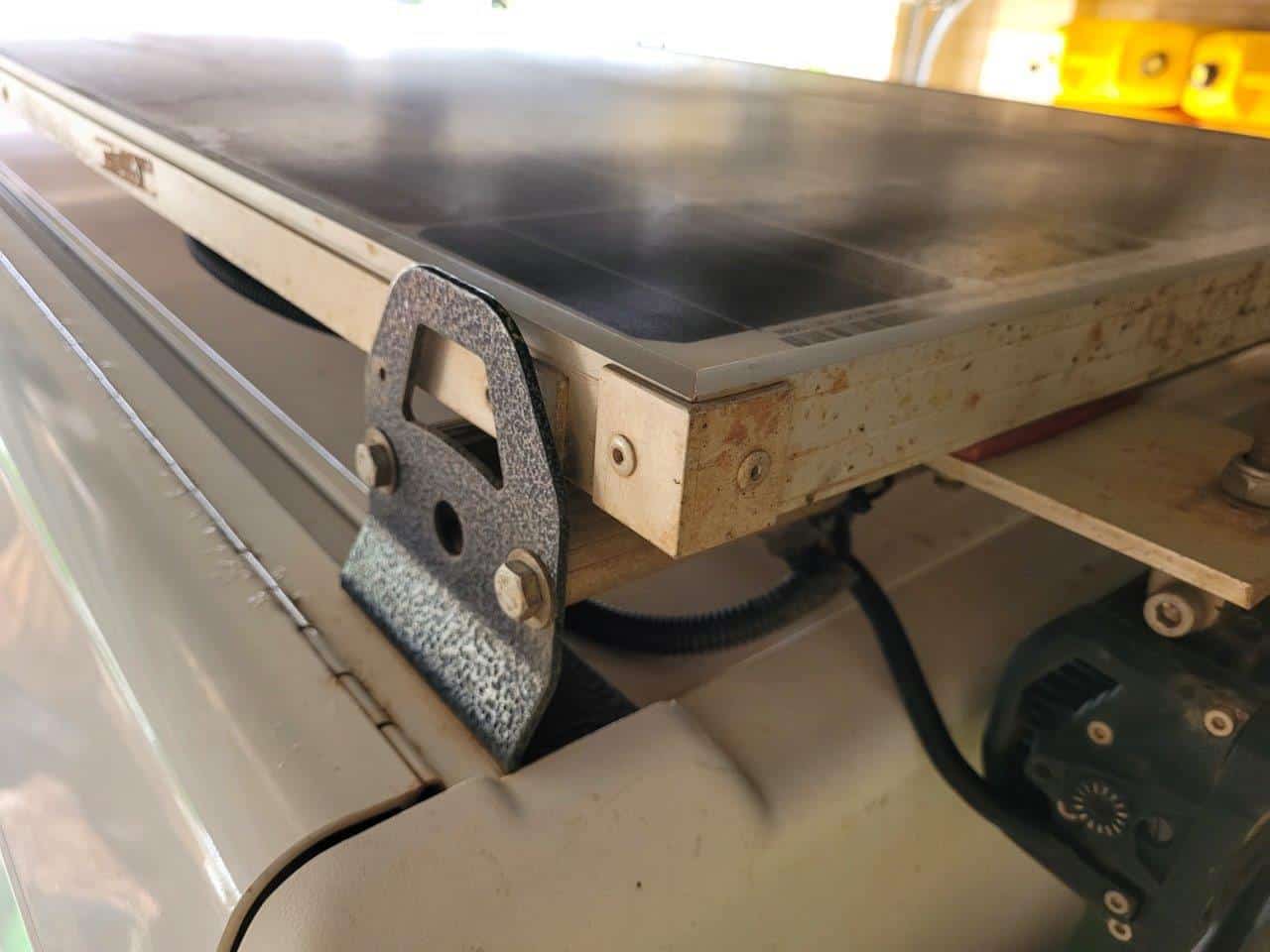 A 200W permanent solar panel on our Dmax

However, be aware that this information will vary a lot depending on where you live – ambient temperature, amount of daylight hours, what fridge you are running and what other accessories you are using.

If you are looking at solar, make sure to read these two articles: Portable vs fixed 12V solar panels and also Solar Blankets vs Solar Panels

So, what’s the best option then?

Some people use a combination of their vehicles motor, a generator and solar, and at the end of the day it comes down to your situation. I have never had a generator, and cannot see myself getting one in the near future, as solar works brilliantly for me.

Ultimately, that’s the aim of the game – get something that works for you, but investigate all 3 options first! Solar has come a long way over the last decade.

One thing worth mentioning is to do your research; a lot of the panels off eBay are false advertised in terms of their actual rating. This explains it all – eBay solar panels; how to avoid getting ripped off.

Our 4WD runs a 150 amp hour secondary battery, which is charged via a Projecta IDC25 DCDC battery charger which takes power from the alternator when the car is running, and the 200W solar panel on the roof which is permanently mounted when the car is stopped.

This runs a 55L Evakool Fridge, a heap of lights, little 350W inverter, and lots of charging points for USB/cigarette lighters. You can read more about this here – Isuzu Dmax Canopy Electrical System.

Our Camper trailer runs 270ah of batteries, which is charged by 400W of solar through a Victron 100/30 MPPT solar regulator, and this in turn runs a 55L evakool as a freezer, several lights and various charging points as required. You can read more about it here – Camper Trailer Electrical upgrade.

With both setups, we can stop infinitely and run what we need to, even when its cloudy for a few days at a time. Our limitation comes from water storage and food!